It was one of those days for a little of everything yesterday. I was out early checking the flowers and watering the flower pots. The rhododendrons are the stars of the garden right now, and the dark purple is beginning to bloom. 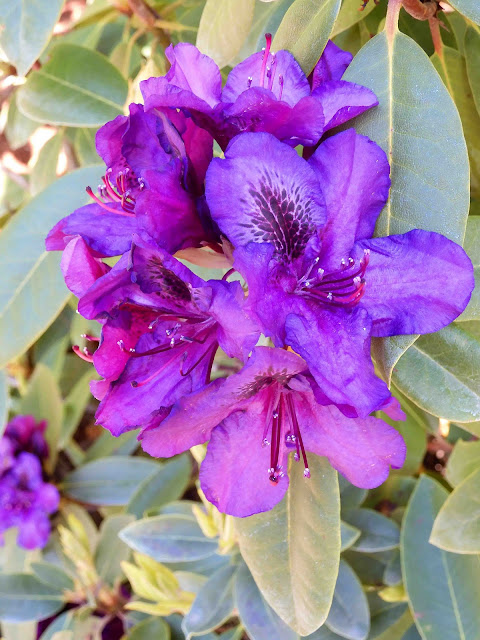 I'm hard pressed to say which is my favorite when I'm choosing between the dark purple, and this lighter purple that looks like an orchid. 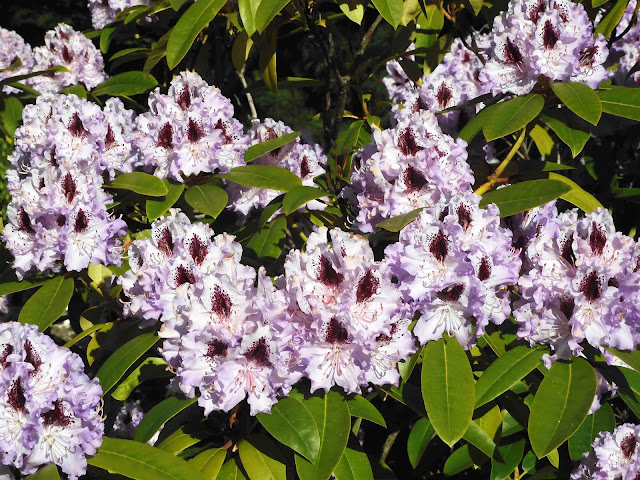 Across the sidewalk from the dark purple, this lighter purple is opening too. 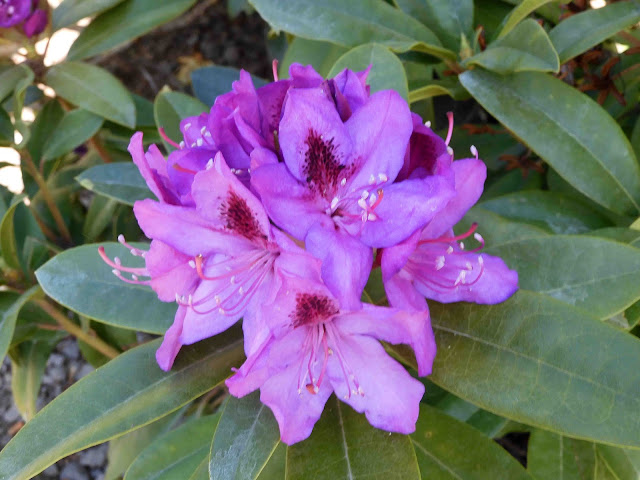 The golden chain tree is fully in bloom now. I'm hoping it will add some foliage this year. We planted this tree a couple of years ago. It suffered a setback when a deer came along and scratched its antlers, knocking it over. We discovered it after our return from a rather long trip. 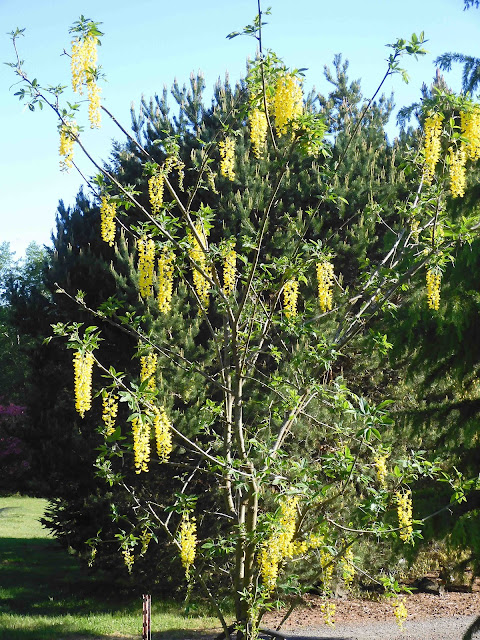 The squirrels have managed to leave the geranium alone so that it can put on another flower. There are lots more buds waiting their turn too. 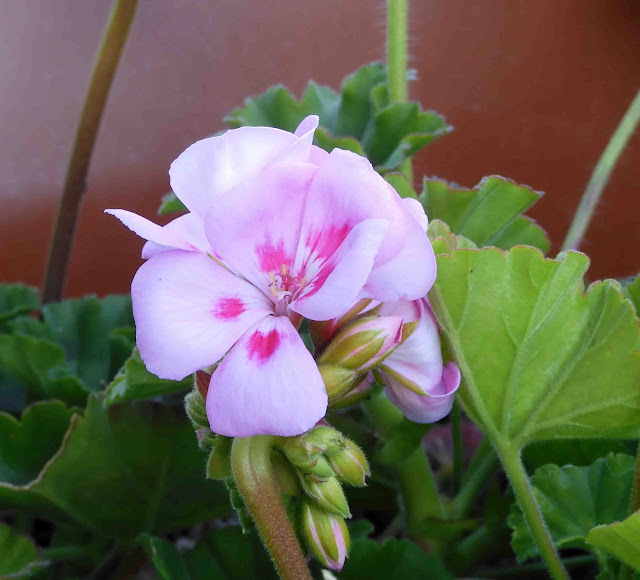 Catnip likes to spring up in our yard in all kinds of strange places. There was some near the original location of the Gracie Memorial Catnip Garden. I decided to dig it up and see if I could move it to the original spot. Gracie loved the catnip, and I had to surround it with rocks to keep her from rolling in it and killing it. So, I dug up this little "weed" of catnip and planted it in among the rocks. I'm hoping it will make a go of it there, and then I'll relocate the stake and marker for the other memorial garden. 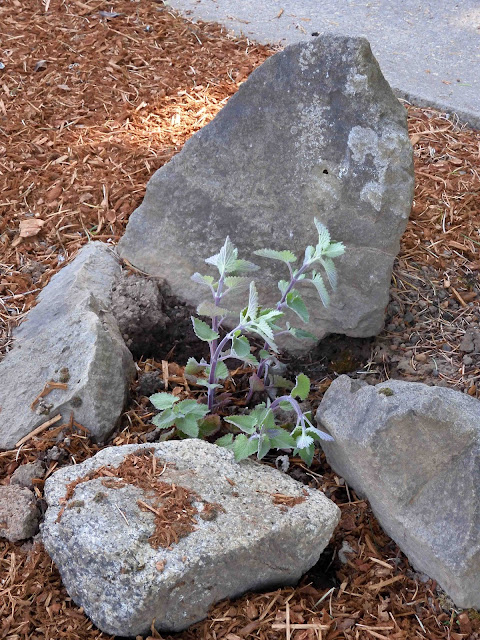 After I moved it, it looked a little wilted for about an hour, but it seemed to be perking up yesterday evening. And if it doesn't go...oh well.
When I was finished watering the flower pots, I got started on my latest slow-stitching piece. 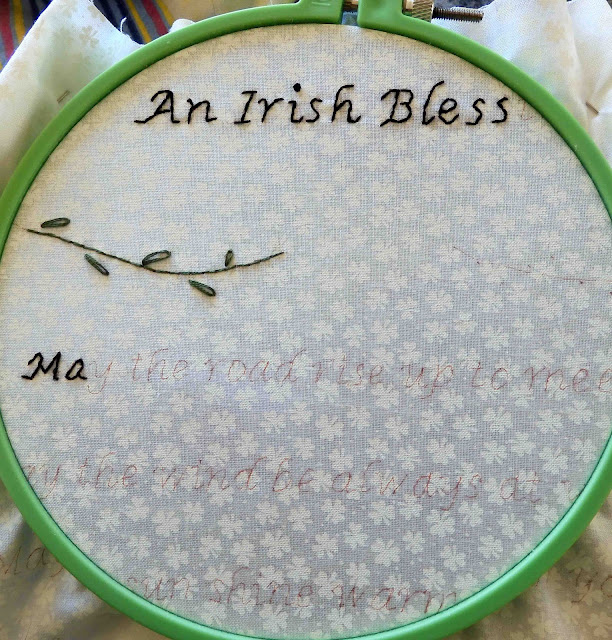 There were a few housekeeping chores to do, and so I set a timer for one hour and worked on the top-stitching for the taco salad block. When the timer went off, I took a break and did some housework. By the end of the day, the top-stitching was finished, but not the housework. (Shakes head disapprovingly, then laughs it off.) 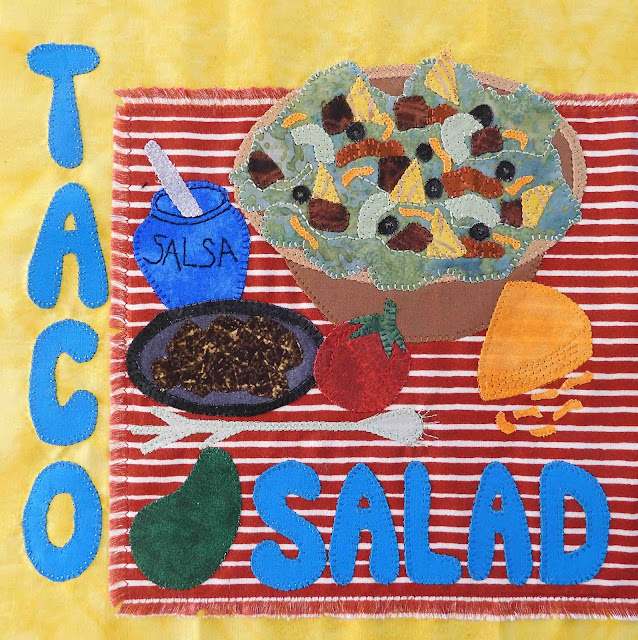 All the pieces are stitched with blanket stitch, but the little bits of cheese and the olives were so small, I did a short straight stitch there. Today I'll be adding a black flange and a hot pink border (as pictured on the pattern cover), and then it will be finished.
The weather was lovely and warm. We had in mind to eat dinner outside. Mike had a serious yen for some gazpacho, and so he drove into town to pick up the fresh vegetables I'd need. While he was there, he picked up a free-standing trellis for the bleeding heart. We purchased the bleeding heart at the Portland Farmer's Market several years ago. I don't think we really expected it to live and thrive, and so we just stuck it in the ground where there was an open spot. When it grew fairly tall, we put a tomato cage around it to stake it up. It's done so well in this spot, we decided it deserved a proper trellis, and it looks so much nicer now. Those are volunteer pansies worshipping at its feet. 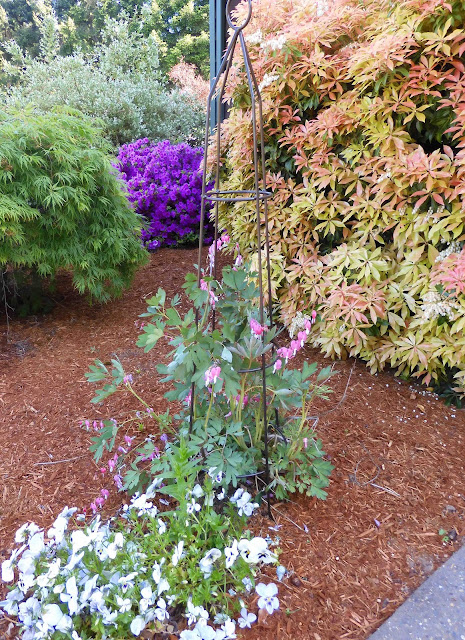 Mike tilled the garden yesterday. Today he'll flatten it out and it will be ready for planting. I have a bunch of starts that need to get into the ground badly, and so I'll probably work on that today. 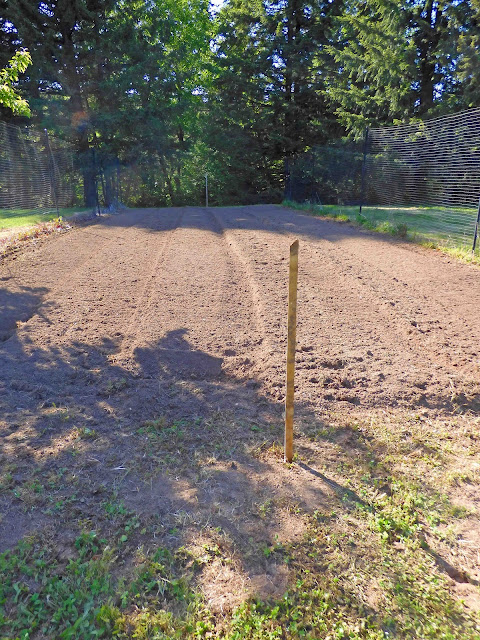 He needs to pick up some lumber to rebuild our bean poles. We grow them on four-pole teepee-type structures. Two legs got broken over the winter, and so we need two to replace them. I'm not sure how far we'll get with the planting today, but we'll probably at least get a start on it.
My afternoon was spent making the gazpacho. Often I add fresh crab to this, but there was none available yesterday, so we had shrimp instead. You can find my recipe for this right here. It's a nice dinner to eat outside on a warm day. The soup is served cold. I like to top it with croutons. 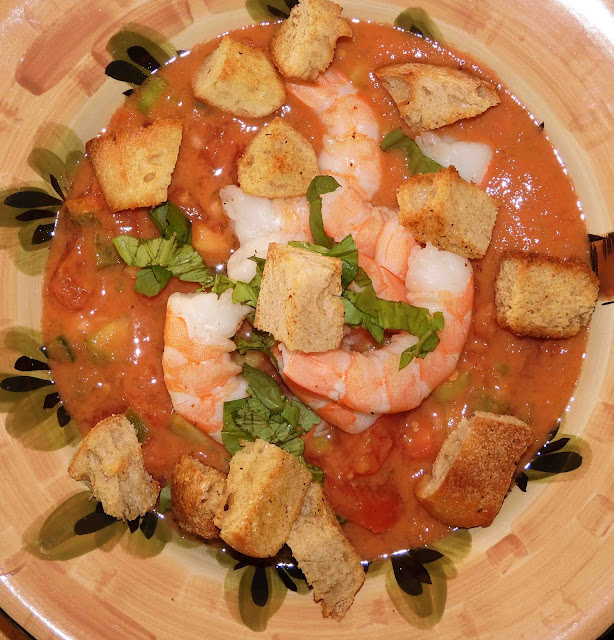 We had some old boxes from wine shipments lying around, and so Mike decided to burn them in this "pop-up pit" we bought on one of our RV trips. When we're boondocking, there aren't any fire pits, and so this little portable fire pit can fill in the gap if we want a fire. We bought it two years ago, and we haven't ever used it. So, what the heck? Seemed like a good time to try it out. 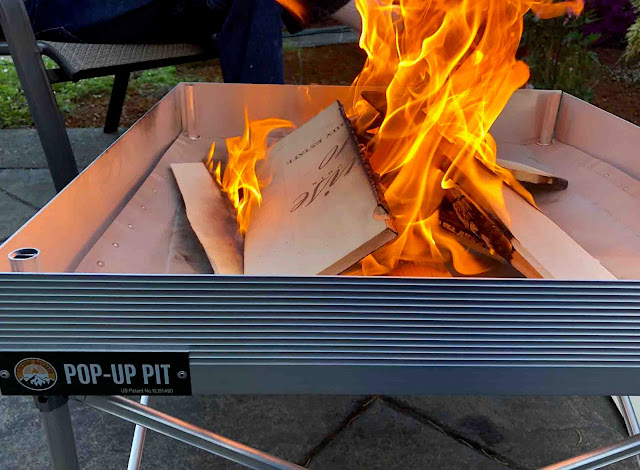 As you might guess, we ran the wheels off the kitties again. They've been outside a lot the past several days. When the weather is nice and especially when we're outside, they want to be out with us. 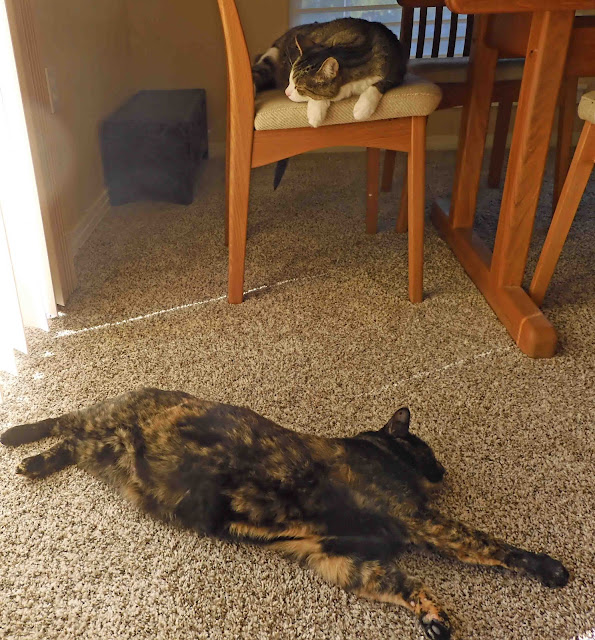 So today will be a lot like yesterday. I'm really hoping to get the starts planted, and I'll be planting seeds no later than tomorrow. There should be plenty of time to finish off the taco salad quilt block, and I'll do a little more on my slow-stitching piece. Our good weather should last at least through Tuesday, and so we're making the proverbial hay while the sun shines.
Posted by Barbara at 6:57 AM

Let us dance in the sun, wearing wild flowers in our hair. ~ Susan Polis Schutz

Your flowers are beautiful. And that poppy! I have planted my remaining seeds and waiting now with bated breath. We finally have a ton of trilliums and bleeding hearts and forget-me-nots, but the more showy flowers will wait til later. We haven't had a hard freeze in about a week, so we are hopeful. I made one of your recipes today, the orecchiette pasta, with pretty much all substitute items, but looking forward to trying it anyway!

I spent the entire morning prepping 6 stars for my new applique...yikes!! It took me quite a few tries before I got the hang of turning those points!! I think after this one I will definitely give fusing a try...
Hugs, Julierose

Your garden is looking really lovely and I enjoy seeing your beautiful spring blooms. Enjoy the rest of your weekend :)

Those rhodo's have the prettiest colours. They never seemed to want to grow here, at least not in our garden anyway. Your taco salad block is coming together wonderfully (and I still have a craving!).

So lovely to see your flowers - we are just getting bits of green on the trees and so glad the apple trees are taking their time so blossoms and bees are happy at the same time. My furries have seen a lot of outdoor time as well - crash and burn! So happy that blogger straightened out their HUGE oopsie - was afraid to open my blog.

The Rhodies are really gorgeous, and I didn't know bleeding hearts climb. We are going to get plants today, so I'm pondering what I want and where I want to put it. I have quite the crop of dandelions to deal with in one of the beds, so that should keep me busy for a bit. The gazpacho looks tasty, too!

Your flowers are beautiful. Enjoy your weather while you have it. We had 3 inches of rain yesterday which will keep my farmer hubby out of the bean field all week. He's decided it's a good time to get the plasma cutter out to make some decorative firepits. He was asking about my quilt pantograph patterns to maybe use as patterns for some of his designs. We'll see what the week brings! Hope you get the gardening done before it rains!

The truth is that there is no end to housework....there is always something to do or redo! So putting it off is understandable and wise. We cannot let it run our lives when there is gardening to do and sewing projects! First things first!! Carol in Texas

Gorgeous flowers and yummy gazpacho! The latter is one of my favorite summer treats.