Summer's here! Summer solstice will reach our part of the world at 2:43 p.m. today, and we are so ready. We have a couple of dinners planned with family already, and a couple of camping trips to see us through the season. Now we're outfitted with masks, and we're ready to get on board.
Most of the day was spent in the kitchen yesterday. We knew it was going to be a warm day, and our plan was to eat our dinner outside. So I made up some gazpacho. This is my own recipe, and it is so good. I missed the beautiful tomatoes from our farmers, which was what motivated me to start making this dish a couple of summers ago. It was still delicious even with grocery store tomatoes. If I get brave enough to head out to a farmer's market when tomato season arrives, I might make it again...or maybe I'll just use some of our romas when they ripen. (That was a very optimistic position to take, don't you think?)
As for the gazpacho, a couple of years ago, I copycatted some we'd had in a restaurant beginning with a recipe from Chef John. After making it several times, I've added, subtracted, and messed around with it until it tastes just the way we like it. I'll give you the recipe in just a second, but first, feast your eyes: 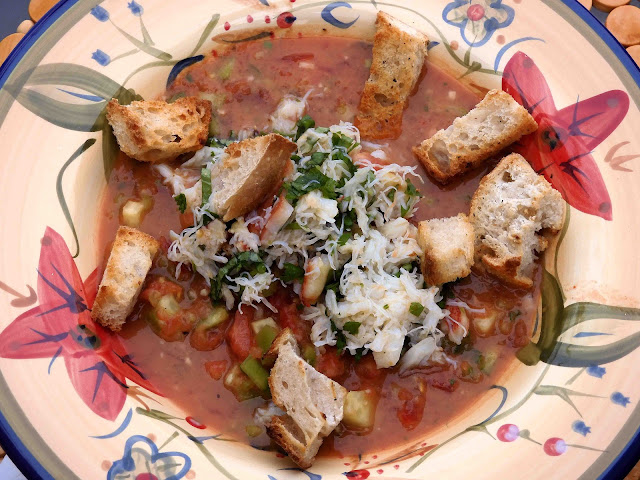 This might have been the first time I put all of the components together. At some point I tried a recipe for some "green gazpacho," and that had the crab component. It was delicious, but the green gazpacho wasn't as good as the red one I'd been making. It made sense to combine the crab with the red gazpacho for the version we had last night.
It was such a lovely warm evening with no wind, and we really enjoyed relaxing outside to finish off our day. 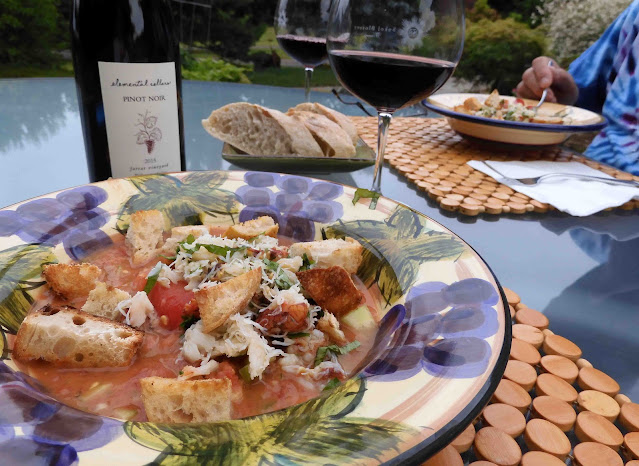 If gazpacho is new to you, here's a little blurb from Wikipedia about it's origin:

"There are many theories as to the origin of gazpacho, including one that says it is a soup of bread, olive oil, water, vinegar and garlic that arrived in Spain with the Romans. Once in Spain, it became a part of Andalusian cuisine, particularly in Córdoba, Seville, and Granada, the Moorish Al-Andalus regions; using stale bread, garlic, olive oil, salt, and vinegar, similar to ajoblanco. During the 19th century, red gazpacho was created when tomatoes were added to the ingredients. This version spread internationally, and remains commonly known.
There are many modern variations of gazpacho with avocados, cucumbers, parsley, strawberries, watermelon, grapes, meat stock, seafood, and other ingredients instead of tomatoes and bread."

So here's how I make it. I should say this recipe has some kick, so if you're sensitive that way, you might want to use only half the jalapeno and half the Tabasco. And you could leave out the cayenne altogether. The way you see it here, it's not so spicy it'll knock your head off, but you might want to start small and increase the hot stuff after you've tried it.
Gazpacho with Dungeness Crab
Serves 4
Ingredients:
4 large fresh tomatoes, peeled and diced
1/2 English cucumber, peeled and finely diced
1/2 cup diced green bell pepper
1/4 cup minced green onion
1 large jalapeno pepper, seeded and minced
2 cloves garlic, minced
1 1/2 teaspoons salt
1/2 teaspoon ground cumin
1/4 teaspoon dried oregano
1/2 teaspoon Tabasco sauce
pinch cayenne, or to taste
freshly ground black pepper, to taste
1 pint cherry tomatoes
1/4 cup extra-virgin olive oil
1 lime, juiced
2 tablespoons balsamic vinegar
1 tablespoon Worcestershire sauce
salt and ground black pepper to taste
2 tablespoons cilantro
2 tablespoons thinly sliced fresh basil
6 oz. cooked Dungeness crabmeat, picked over
3 tablespoons extra-virgin olive oil
croutons, optional
Directions:
1. Combine diced tomatoes, cucumber, bell pepper, green onion, jalapeno, and garlic in a large bowl. Stir in salt, cumin, oregano, Tabasco, cayenne, and black pepper.
2. Place cherry tomatoes, olive oil, lime juice, balsamic vinegar, and Worcestershire sauce in the bowl of a food processor or blender. Cover and puree until smooth. Pour pureed mixture through a strainer into the tomato-cucumber mixture; stir to combine.
3. Place 1/3 of the combined tomato mixture into the food processor or blender. Cover, and puree until smooth. Return pureed mixture to the remaining tomato-cucumber mixture. Stir to combine. Cover and chill in refrigerator for 3-4 hours.
4. Place crabmeat, oil, cilantro and basil in a bowl; stir gently. Divide gazpacho evenly among 4 bowls; top with crabmeat mixture and croutons, if desired.
* * * * *
You can make this easier on yourself by gently pulsing all the vegetables in step one in a food processor. Just be careful not to puree them. The crab salad adds a nice touch to the soup, but you could leave it out. I've used canned crab, which is cheaper than fresh, but last night I sprung for the fresh stuff, and it was so worth it. Also, I like to make the Penzeys Sandwich Sprinkle Croutons, and they were a nice addition to this dish. I cut up the heels of bread and the ends of baguettes and keep a supply in my freezer. When I want croutons, it's a quick job to make them. You can see how I do it at that link I've given you. You can find the Sandwich Sprinkle right here. When I wrote that post, I hadn't yet started sprinkling the garlic powder on, but that's how I do it now. Just spray, sprinkle, sprinkle, bake. Easy.
For dessert, I made this Blueberry Cobbler for Two. It was my first time making it, and this is definitely a keeper. 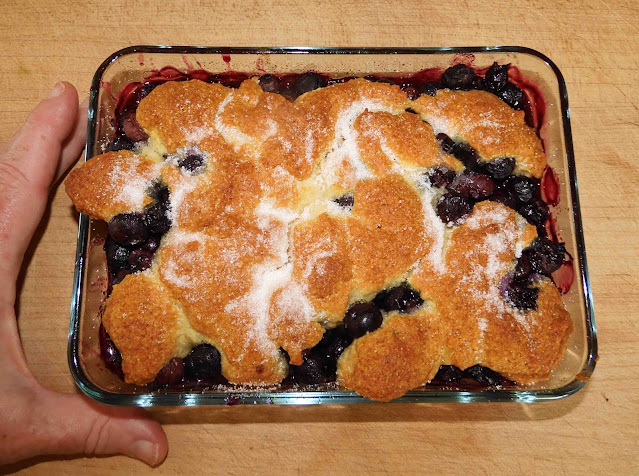 It required a baking dish with a 3-cup capacity, and this little Pyrex baking dish worked out perfectly. I purchased them in order to freeze little single dish meals for camping trips. I liked this recipe because it doesn't use a lot of sugar. It's mostly fruit with a cornmeal biscuit topping. Pretty simple and quick to make. We had it for dessert with a scoop of vanilla ice cream. We might have had two scoops. 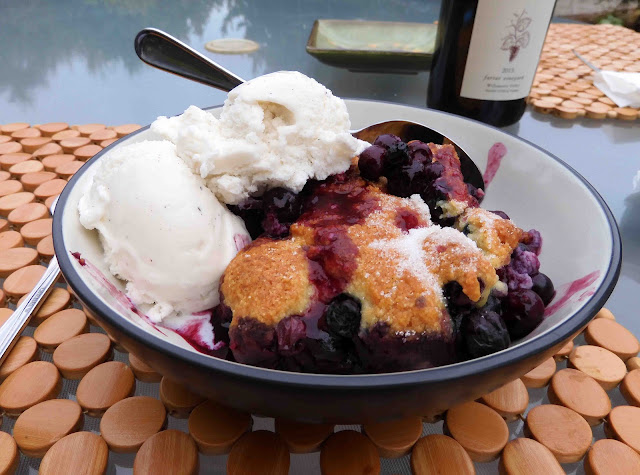 The only sewing I did yesterday was to make the promised mask for Matthew. Matthew chose two batiks for his mask. On one side, I used this petroglyph batik I picked up at a quilt shop in Santa Fe, New Mexico. 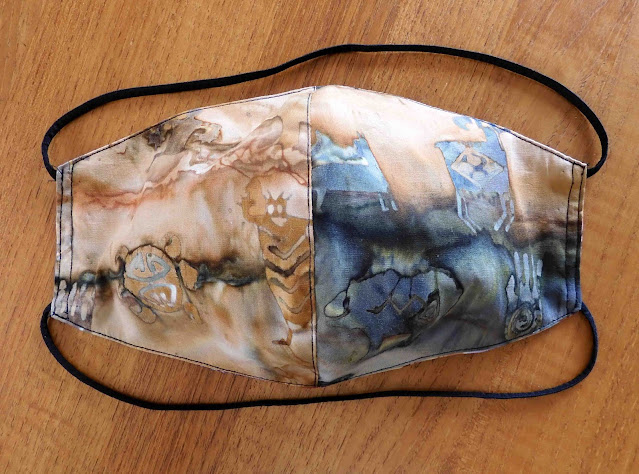 As I mentioned in yesterday's post, this mask that can be reversible. You can find the link to the tutorial right here. Flipping it to the other side, Matthew chose this batik I picked up in Las Cruces, New Mexico, many years ago. 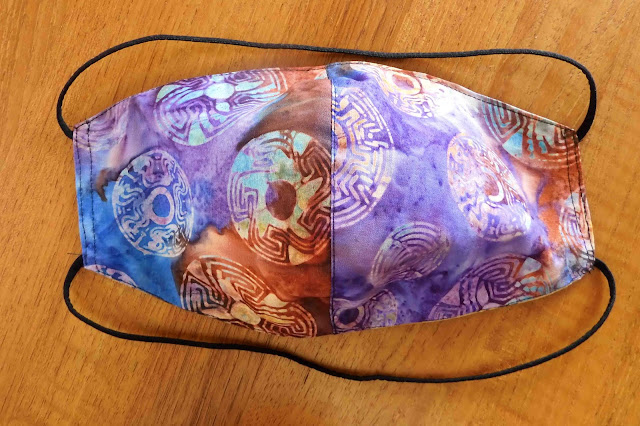 Okay, and I mentioned the Stargazer Lily was close to opening. Imagine my disappointment when I checked it yesterday to find the largest flower bud and a few of the smaller ones had been eaten off by a deer. 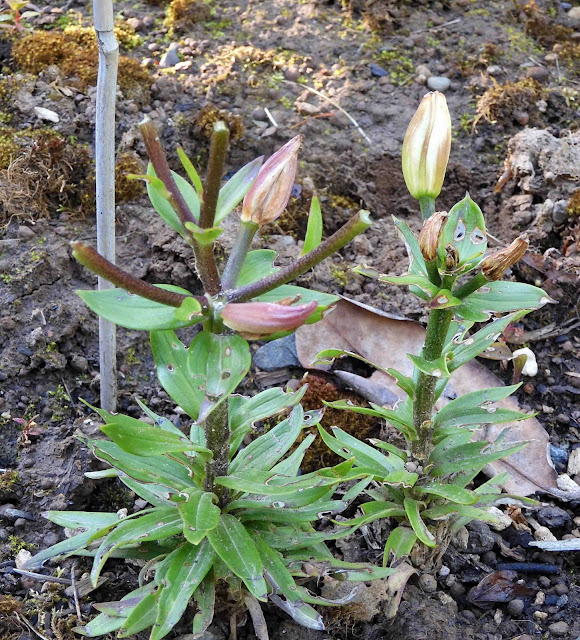 Last seen there were still a few buds left, and so I'm hoping we might get some flowers from it. If it isn't one thing, it's another.
Smitty gave us a little scare yesterday. He caught his morning squirrel, and then we didn't see him again for hours. A squirrel snack always makes him want to take a nap, and we have an idea he went off under a bush somewhere and slept it off. When he finally reappeared, he was looking pretty sleepy eyed. He came inside and continued on with his nap on the tummy-cooling top of our china cabinet. 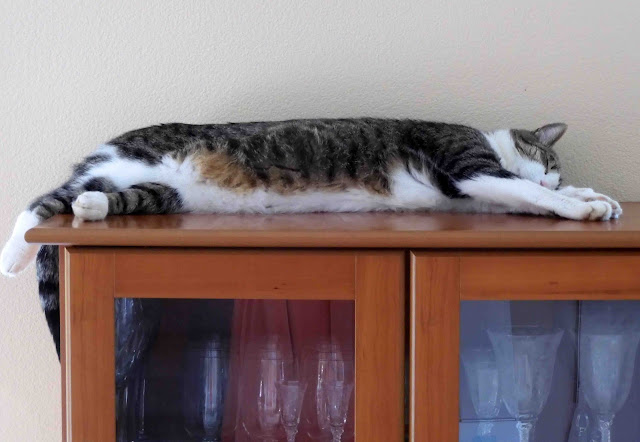 It wasn't so warm yesterday, but quite humid. We were all sweating with even the smallest amount of activity. It was a good day to stay in the basement sewing room, but I spent most of my time in the kitchen.
Today we're expecting some rain, but only for today. Summer should be back tomorrow. I'll get back to my quilt-making today. City Bank has been waiting long enough.
Posted by Barbara at 8:09 AM

Email ThisBlogThis!Share to TwitterShare to FacebookShare to Pinterest
Labels: Cats, Cooking, Gardening, In the Kitchen, Not Quilts, Recipe Test

Don't you just hate it when they disappear, r and you are out calling their name, looking everywhere for then and when they finally show up it's like, Hi mom what going on?" Having had 2 kids , who are now grown, my fur babies are now the ones who make my heart go to my throat when something out of the ordinary happens. Woof!!! So glad Mr. Smitty showed up and everything was alright.

Thanks for the gazpacho recipe, I think I will give it a go. Looks yummy, and what a good idea to follow with the blue berry cobbler. Gonna do both pretty soon! :)

I love gazpacho but won't be adding crab meat to ours I'm afraid (even though I know it's probably really tasty!). So sorry the deer decided they liked your flowers too - wonder if Smitty could take them on too? At the very least scare them off?

I've never made or eaten gazpacho (I live a very sheltered life - ha!) I might have to broaden my scope of food and try that recipe. Do you peel the large tomatoes cold, or do you blanch them a bit (like peaches)? That scare from Smitty would've made me nervous too! He has definitely been the hunter lately.

Oh, my! Those deer are almost as bad as the squirrels! Your cobbler looks divine!

Those wascally deer! You'll just have to plant more lillies, some for them, some for you! When we were down in Rockport, some of the snowbirds planted bluebonnets around the base of their palm tree. One night we were walking the dog and came upon a doe nipping off some of the blooms. We startled her and she ran off, not to return that night. The next day, the workampers thought they would neaten things up, and weed whacked everything that was left. Ignoramuses.

I've never known what gazpacho was, doesn't sound awful, but also not nearly as appealing as the blueberry cobbler. Too bad I didn't see your recipe a couple of days ago, when we were well stocked with bbs. We've eaten most of them by now, so it'll have to wait. We were able to snag done fresh Fredericksburg peaches at the farmers market on Sat (our one trip out for the next 2 weeks), but at 7 bucks for 6 peaches, they have been slowly savored, simply washed and eaten, nothing added. They have been delicious, and we will enjoy our last 2 for lunch tomorrow. Today, actually. It's a workday, so, instead of sleeping until the alarm wakes us, I guess I'll just stay up so I don't miss it. Bat$#+t crazy insomnia.

The refuge was supposed to partly open to half staff, no public today, but we noticed a new sign posted, saying they are suspending operations, effective today. ??? Wonder what that means for us. Could possibly mean we are done working for the summer! Suits the heck outta me!!! We bought a kiddie pool and enjoyed basking in the sunshine behind the camper the other day. I could do it some more,once the sunburn eases up a bit!

Guess I'd better go catch up on your posts of late to see where y'all are headed!

Dinner outside sounds lovely. It gets too hot here too fast to do that often. I like Edna's mask pattern too, it stitches up easily and they fit My Guy better. I've been using the t-shirt ear loops as those seem to be the most comfortable for everyone. I wash our masks in a mesh bag with the masks safety pinned to the bag at either end. They don't tend to wad up so much during washing and drying.