Some of you might be aware of a big snafu on Google/Blogger yesterday. I've heard of posts being removed as malware, and that's only the beginning. By my investigation, all Blogger blogs were blocked as unsafe sites. My friend Cheryl wrote to me in a near-panic since it happened just after she switched her email feed over to a new service. As it turns out, that had nothing to do with it...thank goodness...and everything appears to be set right again. At least I hope so. This is one of those times where I'm afraid my words may get out ahead of what actually happens. I don't know anything more than what I've said here, but let's just hope the whole thing is resolved. If not, you may not even be able to read this post. And so maybe it doesn't even matter that I'm writing it. It's okay...I'm used to that.

Moving on...there was no sewing yesterday. I got so involved with gardening and trip planning that I wore myself out for anything else. I started by repotting the tomatoes into their largest pots of the season. 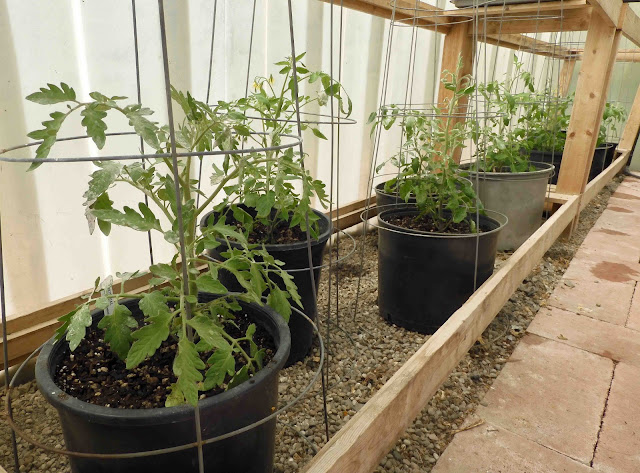 The one on the left is a slicer. The rest are all sauce tomatoes. There is also a cherry tomato planted in one of the whiskey barrels closer to the house. I like having them close so I can go outside and snack on them at will. Mike was off getting his hair cut, and I ran out of potting soil after the first five were finished. I had five more to go, and so I managed to heft one more bag of potting soil up into the bin to finish off the job. Not bad for an old woman with a healing broken shoulder.
As I was walking to the greenhouse, I noticed the first flower has appeared on the newest "Edda" clematis. I'm hoping it will open all the way today. 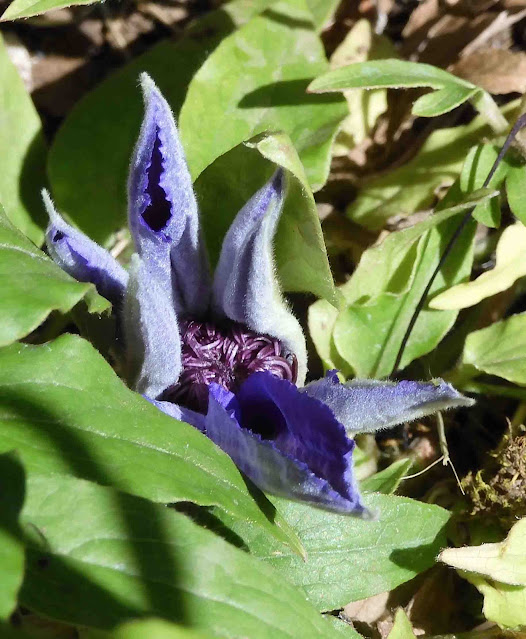 Also, I was happy to see the first poppy has opened, but then sad to find its stem is broken. By the end of the day, it was still as red and vibrant as ever. Let's just not tell it that it has a broken stem. Imagine the heights to which it could soar if it doesn't know about its disability. Or maybe not. 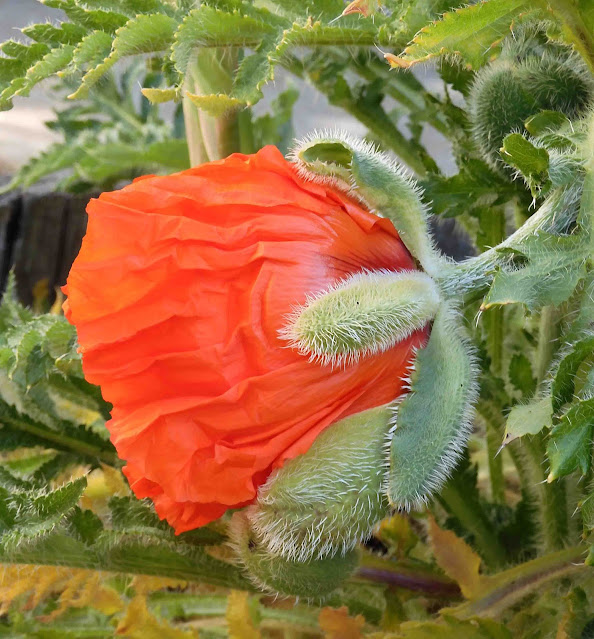 Among my seedlings there are some hollyhocks. I want to plant them along the wall where the "Vera iris" have grown previously. I was getting ready to walk over and look at the spot when I stopped short, nearly having killed myself by walking through a spider's web. Phew! That was a close call. 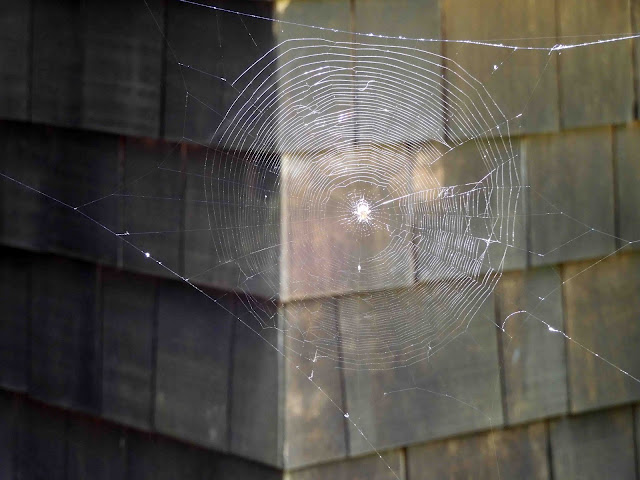 When I was finished with the tomatoes, I took another shot of the cyclamen since yesterday's image was blurry. The bright sun has the colors washed out, but there they are. 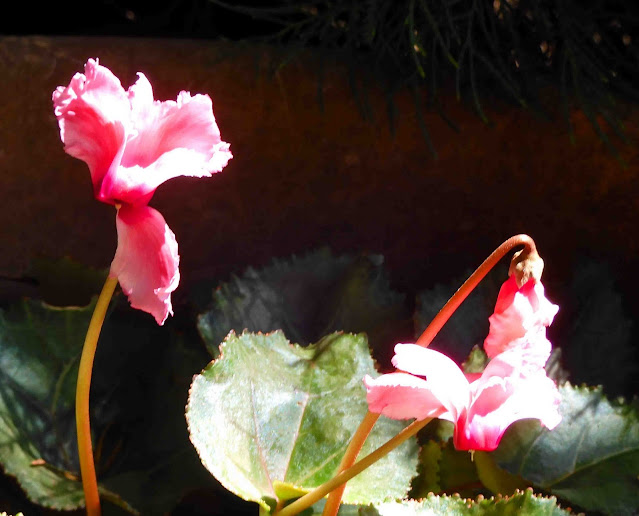 I was kind of tired after hefting around bags of potting soil and tomato pots heavy with dirt. The rest of the day was spent finalizing plans for our trip this fall. I've shown you these routing maps before. Not all the stops show on the map, but you might be able to see the places we're going by looking at the list on the left side. Google maps will only allow me to put in nine stops per map, and so they overlap with the last stop and first stop on each page. 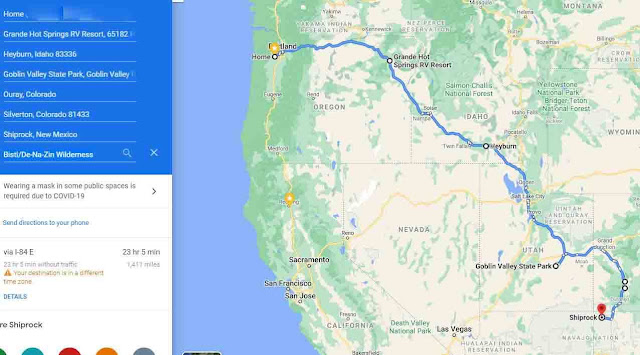 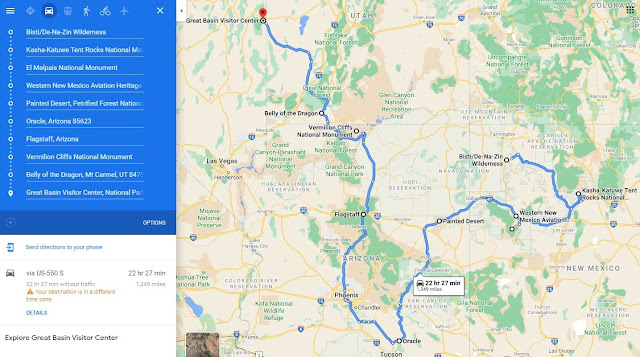 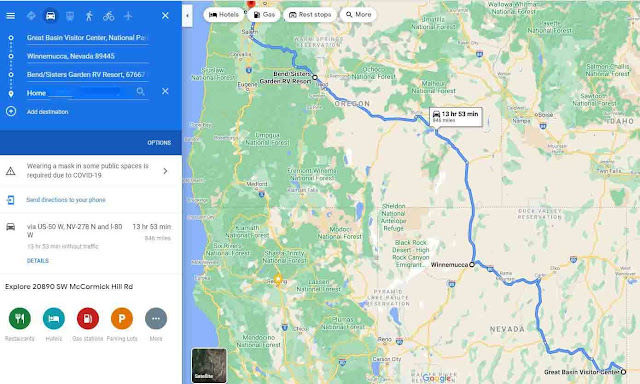 The trip will take about six weeks and we'll travel about 6,000 miles, excluding sight-seeing. I have reservations all along the way, and so I hope we won't have to reroute ourselves at any point. We'll be doing some sight-seeing at various spots I've pulled from my state folders, and we'll be riding ATV's in Ouray and Silverton, Colorado, and then again near Oracle, Arizona. The trip is still several months away, but we're ready to go now.
The kitties were outside most of the day. It was a lovely day, and Mike and I spent a good portion of it outside too. By day's end, we'd run the wheels off both kitties. 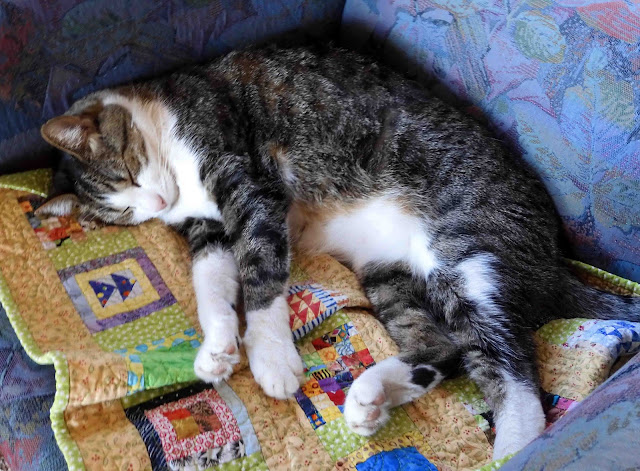 Smitty caught and devoured a vole, so it was a good day for him too. Sadie was on the hunt for squirrels and chipmunks, but she didn't catch anything. She just enjoyed an evening sunbath, although the sun had moved on when I took this picture. 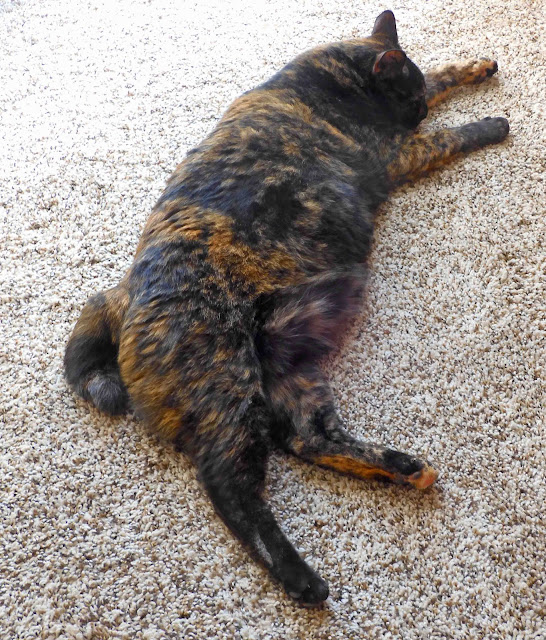 I'm thinking I'll have some time for sewing today, but the garden is taking on a level of urgency right at the moment. We're expecting rain by Tuesday, and so I'm hoping we can get it all in and planted before that starts. Most everything is already sprouted, but I still have seeds for corn, green beans, and beets to sow directly into the ground. Now that I've learned of the paper towel method for sprouting seeds, I might give the green beans a head start by giving them 24 hours in the paper towels.
Okay so going back to the beginning of the post...let's just hope everything is working as it should, or I will have written all this for nothing. Fingers crossed as I hit "publish." 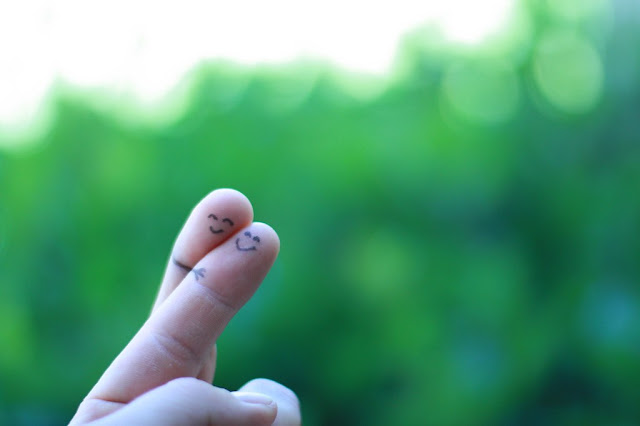 Never trust a computer you can’t throw out a window. ~ Steve Wozniak

Well, I was able to read it. I woke up to a couple of emails saying that Blogger removed some of my posts because of virus/malware. WTF? Anyway, shortly thereafter the posts were re-evaluated and reinstated. I figured it must have been a snafu. Have fun in your garden! Ours here in TN is sucky right now. It has been colder than normal, so I think that is the problem.

I was blocked from reading the blog yesterday but you came through just fine today. When I was a working person, I threatened to throw the computer in the dumpster at least once a week! Have a great weekend!

Also able to read your blog this morning. Last night I was getting messages on several blogs that they were compromised and I couldn't read them but this morning all seem to be restored.

So happy as my little blog reading break is a most enjoyable part of my day.

Thank you for blogging.

What a fun post. All your flowers look stunning, but your poppy is amazing. I love your photo with the spider web and curious which camera you used to take that excellent shot? Your plans for a Fall trip sound like loads of fun and well planned out. You are certainly going to see a variety of landscapes, many perfect for off road vehicles. I look forward to hearing about it and seeing your photos. As to Google/Blogger pulling blog posts or shutting down blogs yesterday, I did have a post removed yesterday but was reinstated this morning. So bizarre. I thought they considered a picture I shared of a chicken was inappropriate as the chicken didn't have clothes on. LOL!

I think everyone was hit last night by that Snafu!! Your first thought is always what did I do wrong? Apparently nothing!! As it's all fine this morning...I haven't found any explanation anywhere either...
That is a really long journey you will be taking; i hope you really enjoy yourselves and that it all goes well...
Hugs, Julierose

I was able to read your blog thru Bloglovin yesterday but a couple of others gave me the malware warning. Today I haven’t seen that on any of the blogs I follow.

Yes, there certainly was a furor over whatever issues Blog-grrr was having yesterday. Today, fingers crossed, so far so good. Must have been a hiccup....or gas. Now, you shouldn't be lifting heavy things....tsk tsk.
Your trip looks like it will be fantastic and I, for one, will be looking forward to your record of it all.

I got the red page with the 'dangerous site' message when I clicked on your blog yesterday. Kept getting the same message as I went down through my blog list. Quickly realized it was Blogger blogs. Switched from Google to Bing and it let a few of them through. Then it blocked me again. So I switched from Firefox to Microsoft Edge and was able to read the remainder.
Silly internet!

I, too, struggled with the blogger issue. I was able to click the link to let me read the blogs anyways, at my own peril. I was pretty sure that the dire warning that my quilting "friends" were not trying to steal my identity, as I was advised you all might be, since none of you were asking for any personal information, like the warning indicated you might try to trick me into. The best part of all that was trying to refresh my OWN blog to update the post feeds (where I find the latest posts, rather than any sort of subscription service) and was told of the DANGER of my own blog. On blogger. Using Chrome. Seems Google got a little ahead of itself since I already am myself. But you know, whatever. If I've got to be somebody, it might as well be myself. That seems easiest in the long run, no matter how dorky my friends and family and coworkers think I am! I updated my Chrome app on the phone (where I do the majority of reading blogs now) and all was well - I figured it was outdated software, but maybe not? Anyways...good job Smitty with that vole! And much luck to Sadie in her pursuit of other vermin. Your trip sounds like fun, despite the many miles to travel.

I saw no issues. I use Safari as a browser. My email server always scans a link and reports any issues. No issues.

Lifting 40# bags? How is the shoulder and connected parts? I hope no problem. I understand why you were tuckered out. Our garden is growing as long as we water it. What passed as our rainy season is over. We may get a sprinkle or two before next winter but not enough to be restorative. What a trip you have ahead. I’m sure the kitties are dreaming of their perches while on the road.

I wasn't aware of the issues with Blogger, but I'm reading this post like usual. You had a good, busy day outdoors. The kitties definitely looked woofed.

The more I read about Blogger, the happier I am that I am on Wordpress, LOL! Sorry for all these issues. I follow you on Bloglovin, and your posts are there just fine today.

I'm glad the blogger debacle is over. I wish they would tell us what the problem was. I tried getting to my blog thru 2 different browsers, too, and both said my blog was 'dangerous.' We had voles last year. They ate most of our plants, except the day lilies. Hubby waged war on them, and finally got rid of them. Our son is re-planting things this year (I only grow dust and dog fur). Be careful with that shoulder. Glad you got everything re-potted.

Just catching up but here I am. Easier on my laptop than my phone. Gardens look great.

I'm signed up for a LOT of quilt blogs and yesterday when I clicked on a couple of them there was a red warning message that they were unsafe, and did I want to proceed anyway. I punched Proceed Anyway, and every thing worked fine.

As a kid we picked raspberries in June and I met up with lots of those spiderwebs. In the early morning they have dew on them and they were beautiful.