It was a warm day yesterday. We're expecting cooler weather today, and potentially rain by tomorrow. With rain in the forecast, it's becoming rather urgent that we get the garden planted and ready for the growing season. We have a trip to the beach planned at week's end. We'll be celebrating 46 years of marriage a week from today, and we have a special dinner planned for Saturday. Erik and Mae will be joining us, and so it should be lots of fun.

Getting back to the work at hand, there was much to do both yesterday and this morning. Before work always comes pleasure, though. I do have my priorities. We've reached that point of the year where my first act of the day is to walk around and see whatever new blooming things might have shown themselves. I was not disappointed yesterday. Another poppy has bloomed, and this one doesn't have a broken stem. Check this out: 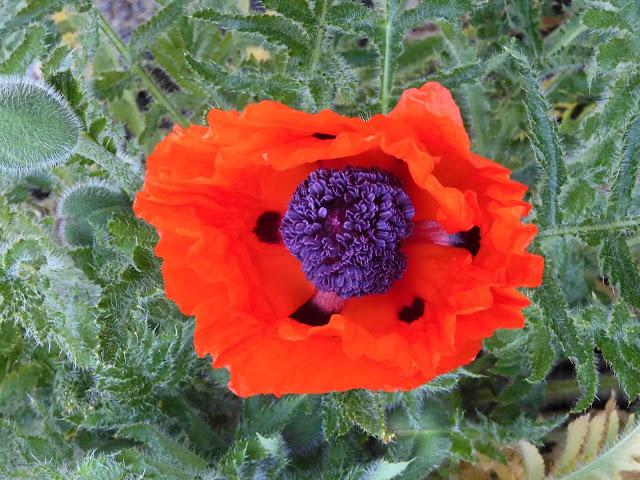 Isn't it a thing of beautify and wonder? There are poppies planted in two of the whiskey barrels. This one happens to be located outside the door of the greenhouse and it gets full sun all day long. The buds it formed this year are nearly as big as my fist, and so the flowers are huge as well. You can see in the upper left-hand corner of that image there are more buds coming. I'm estimating more than a dozen flowers in each whiskey barrel. We'll have poppies in profusion soon.

The new clematis has put on its first flower. It's a little strange in that it's blooming practically straight from the ground. There are more buds higher up on the trellis, and those should show themselves off a little better. 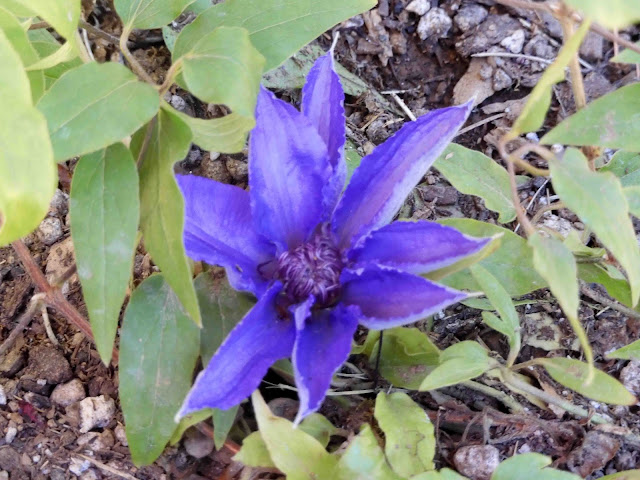 Two of four lilies are showing themselves now. I always worry about the ones that have not poked their heads above ground, and I remember they were late last year too. I believe the one pictured below is an Asiatic lily, but I can't really remember until I see its flower. It put up two stalks this year, and that is something new. Now it is forming flowers, but it will be quite a while before it blooms. 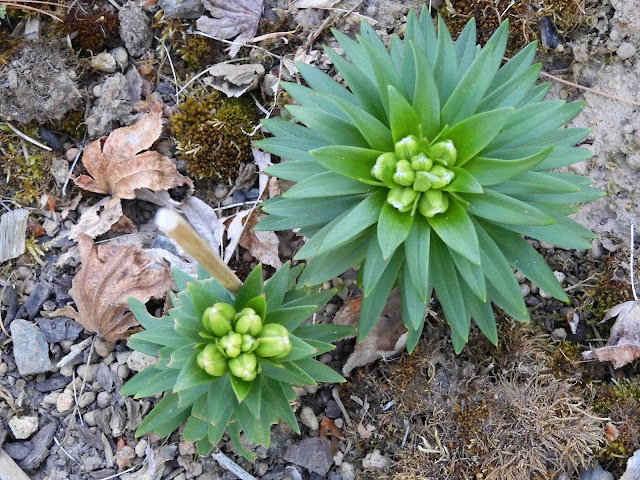 As I mentioned yesterday, I moved some volunteer catnip back to the original space allocated for the Gracie Memorial Catnip Garden. It was wilty when we went to bed the night before. Yesterday morning it was looking downright perky. It was tempting to move the Gracie stake and epitaph stone back to the original memorial, but I decided that would be jinxing its success. I decided to wait to see how it would do during the warmth of the day. 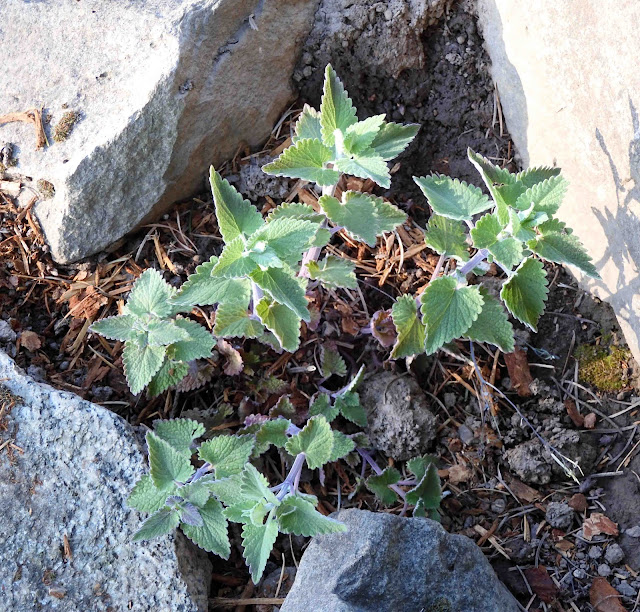 Back inside, I made some progress on An Irish Blessing. I believe this one will stitch up fast, and so I need to make the next block for Dancing Chickens and Flying Pigs. I'm hoping to at least get a start on that today. 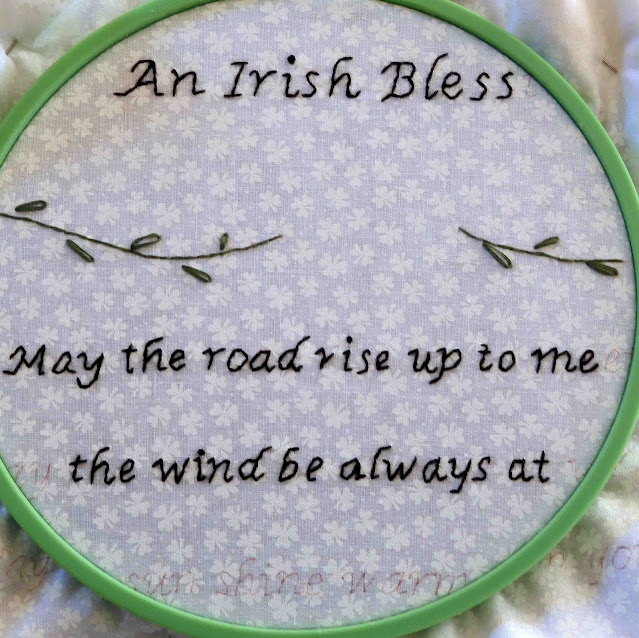 Before anything else could happen, I wanted to add the borders to the Taco Salad block. Now it's finished. 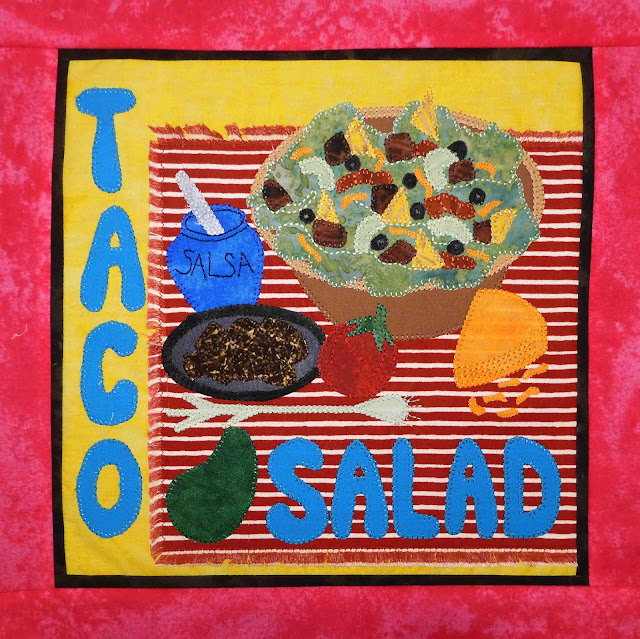 Here are all the blocks I have for this quilt so far. It's halfway there. 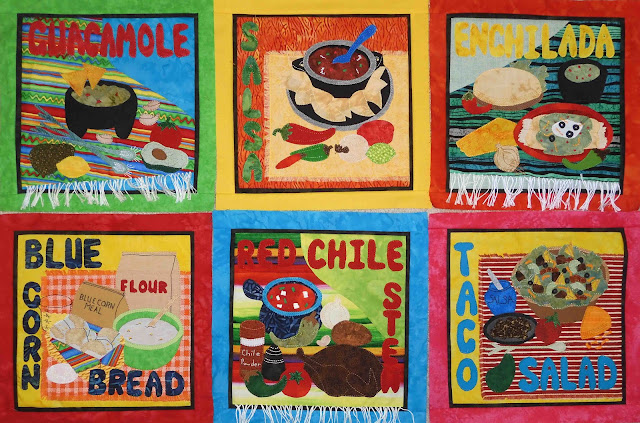 Okay, and so next, it was time to get outside and do some work in the garden. Mike was busy smoothing things out and setting up the automatic sprinkler system. The automatic squirrel-hunting machine was hard at work. He caught one too. That's one less squirrel to do garden damage. 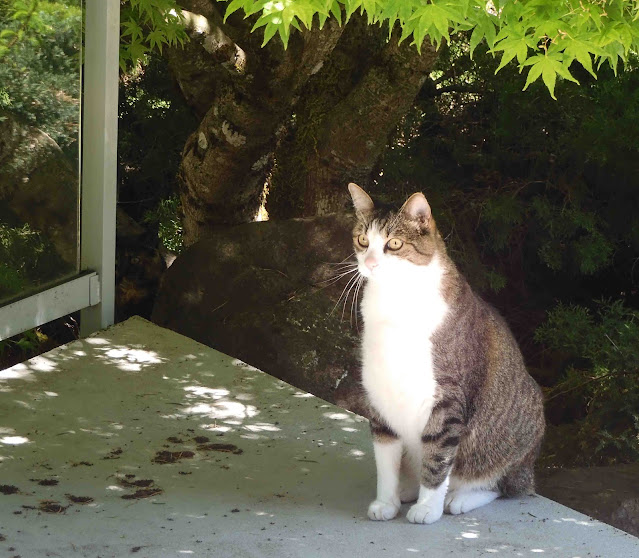 Our planting was delayed by several hours when Mike discovered a broken hose adapter. He has an automatic sprinkler system set up. With such a hot day, I didn't want to plant the new tender seed starts unless I knew they could be watered right away. Mike's usual hardware store is closed on Sundays, and so it was an effort finding the adapter he needed to make the system work. Finally, he was able to find one at Lowe's, drive into town and back home, and we were ready for planting. Yay! 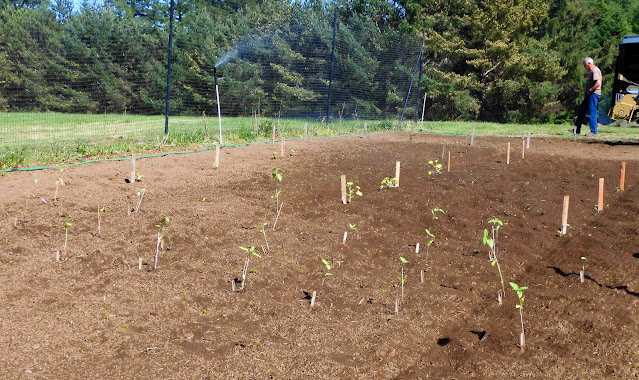 Now all the seed starts are in the ground. There are dozens of sunflowers, 7 pickling cucumbers, 4 zucchini, and 8 cantaloupe starts. This morning we'll be sowing seeds directly into the ground for corn, green beans, and beets. With tomatoes and lettuce in the greenhouse, the garden will be set for the year after today. Now, be fruitful and multiply!

Okay, and by day's end, the catnip was looking great, and so the Gracie Memorial Catnip Garden has been restored to its original location. 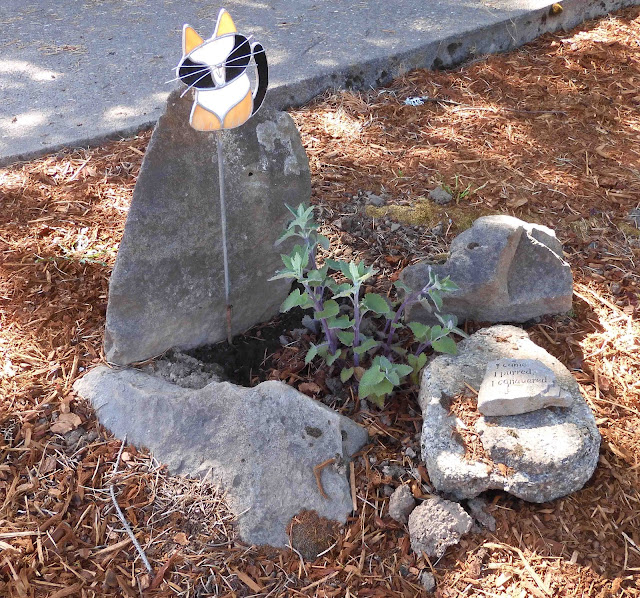 Smitty was hot after a day of hunting, and he was resting in his favorite spot under the Japanese maple tree on the deck, where he can cool his tummy furs. All that debris around him is little spent flowers from the maple tree overhead. They'll be dropping for another week at least. 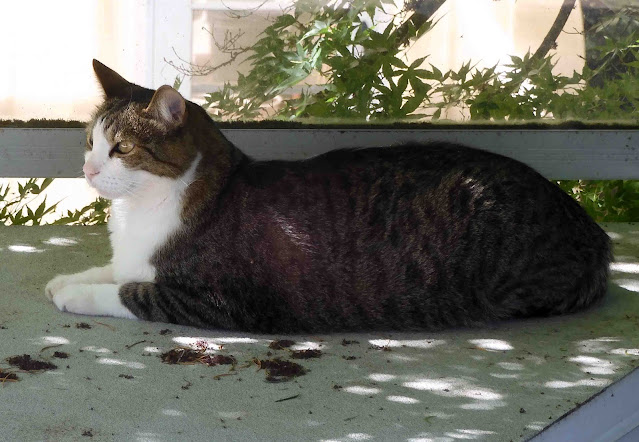 As a final end to a productive day, the maps arrived for our trip this fall. The only state missing here is Oregon. There are only two ways out of the state we typically drive...either east on I-84 or south on I-5. We figured we knew the way, and so we didn't replace our Oregon AAA map. We got mad at AAA several years back when (for the third time) they failed to help us out with their roadside assistance on the flimsiest of excuses. And, you know...either the third time's a charm, or three strikes and you're out. Where AAA was concerned, we chose the latter. We've always used their maps, but they were nearly five years old, and so we decided to update our library of maps for this trip. 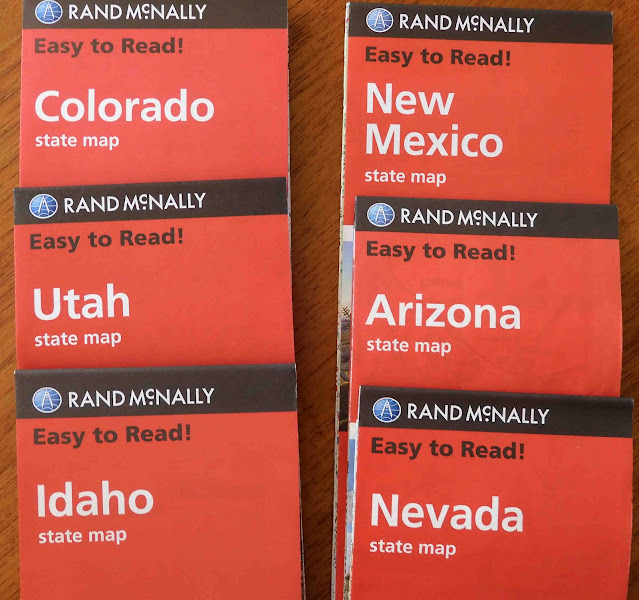 All right, so there's no time to waste this morning. I have PT this afternoon, and those seeds aren't going to plant themselves. There are bean poles to build, corn and beet rows to stake and string, and seeds to plant. Breakfast is next, but then we'll be gardening urgently to get it all finished before I need to leave.

Gardens are not made by singing ‘Oh, how beautiful,’ and sitting in the shade. ~ Rudyard Kipling

I am in awe of Smitty catching and killing squirrels. Seems they would put up a heck of a fight with their razor claws. Your squirrels must be smaller than the grays here. Love the poppys.

Pretty poppy and all the flowers. Getting your garden in is great satisfaction. Now comes the watching and caring and hopefully gather the fruits of your labor. We find each year the star tomato changes. One year it may be a marzano the next an green striped one. So we plant several types. Cant wait to see the varieties of produce coming from your garden.

The thought of gardening urgently - hmmm. Those poppies are one of my favourites and that one is spectacular. Your taco salad block looks great and I loved seeing it together with the other completed ones.

That poppy is just gorgeous! Smitty doesn't look too worse for wear after tangling with a squirrel. Yippee for getting the garden in and ready for the rain.

I have a GPS in the car and use it a lot...
But
I have to say I love having a real hard copy map in my hands for a trip beyond my usual stomping grounds.

So many times they have given me a way around a problem, opened up possibilities for new things to see, let me see the progress of the trip and in a couple of cases let me show others where they where and how to get where they are going.

Planting my garden, too, and I thought I would try the Three Sisters planting in one spot....have you ever done that? Corn in the middle, three pole beans around it, and squash around it to shade and reduce weed growth? It seems to me the beans would pull down the corn. Haha!
Everything else is going in the way I always have....only room for one experiment!

You sure pack a LOT into your days! And a lovely Happy Anniversary to you two!