We had very warm weather yesterday. Toward the end of the afternoon, the temperature outside was 98°F., which is very hot for our hill. I can only imagine how people in the valley were suffering. We're expecting more hot weather today, but this morning's sunrise was beautiful. I can't recall seeing raking light from the clouds like this before. 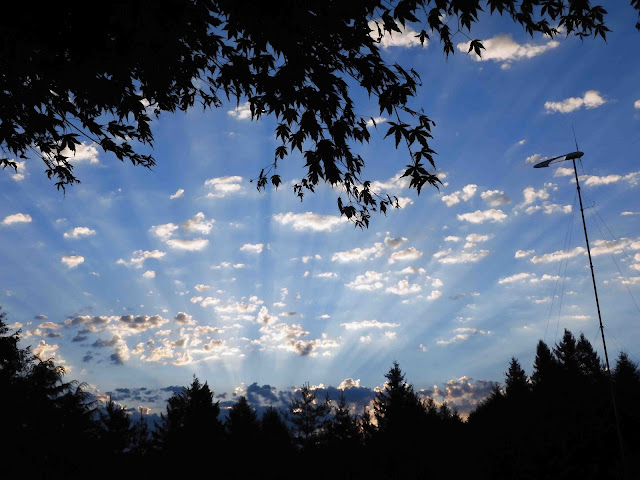 While I was out, I walked all the way around the house, passing by Smitty along the way. He loves the warm weather and spends most of his time out on the catio. 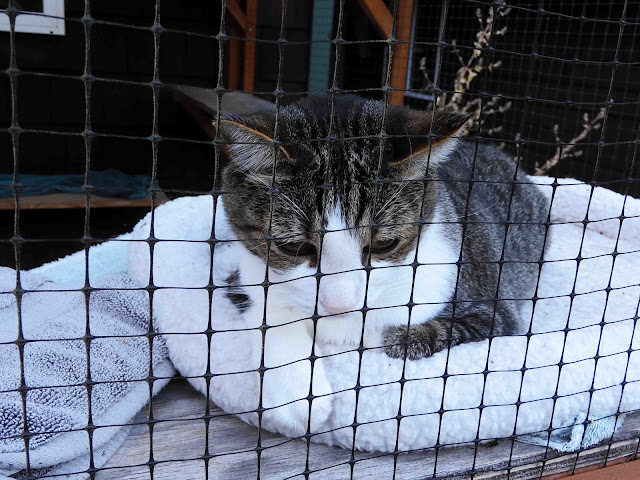 Also, I passed by one of the few sunflowers not eaten by squirrels. It has a lean to it, and its stem was chewed at some point. I didn't think it would survive, but it has. Now it's beginning to open, and there are several flowers on it. 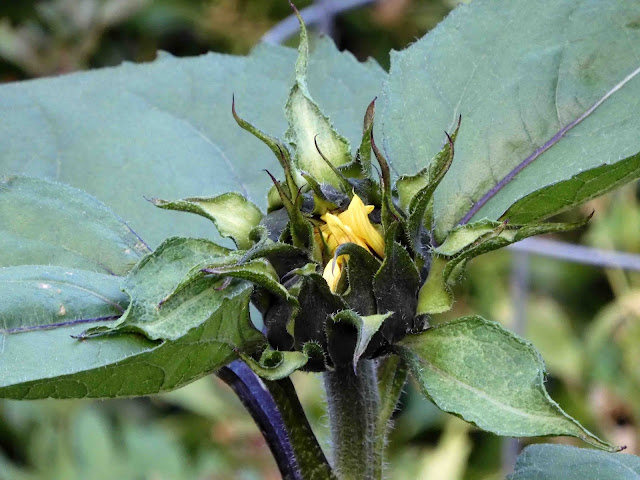 My first work of the day was to get out, hoe the garden, harvest some beets, and then water the flower pots. I've been keeping an eye on the beans, although it's been several days since I've checked. Some of the first ones to appear are ready for harvest now. That will be my first act this morning. If they're left too long on the vine, they can get tough and stringy, and so I want to start paying better attention from here on. There are lots and lots of tiny ones, but I expect another week or so will have them ready for harvest. 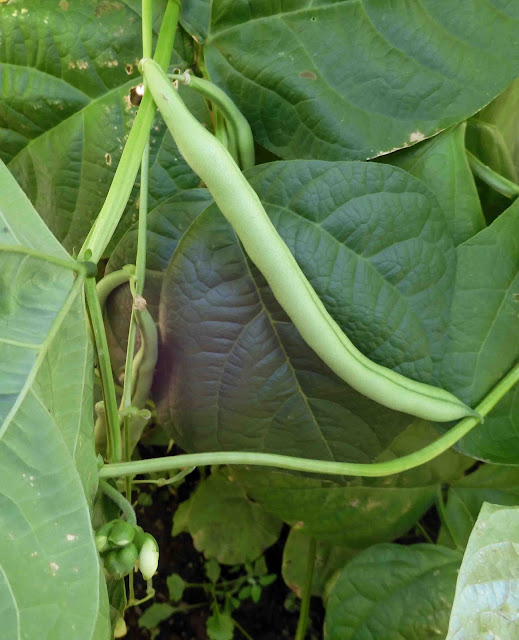 The corn tassels are appearing in greater numbers now. I love looking out across a cornfield filled with tasseled tops. 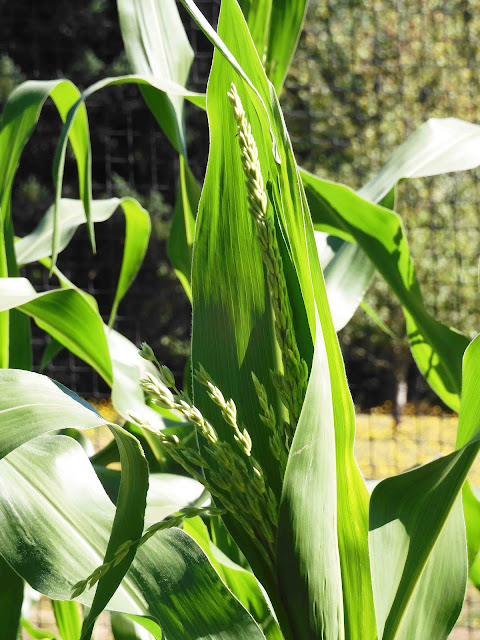 It's been so long since we've grown corn, I've forgotten what to expect from them. Unless I'm wrong about this, I believe I'm seeing the first ears appearing. 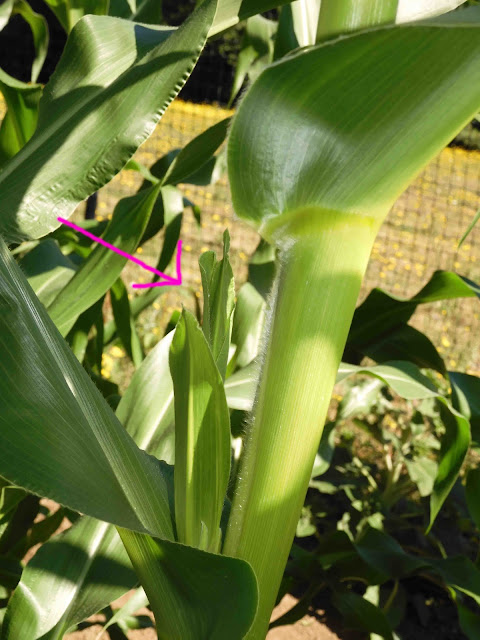 This is the time of year when I start getting nervous about the harvest. We have plans for a two-week (or so) trip right after Labor Day. Now I worry the corn will be ready for harvest while we're gone, which would be a shame. I'll pay attention. We may ask one of the kids to come up and harvest it if it happens while we're away. And, of course, the annual plum worries have begun. Last year, the plums ripened just as we were heading out the door for our trip to Colorado (which seems more like ten years ago). I ended up harvesting enough for barbecue sauce, pitting, and freezing them to be canned when we got back. As for the corn, I just want it straight from the plant, and so I'm really hoping it will ripen before we go or after we get back.
Checking on the sunflowers, I didn't see anything new, but I did notice this new wildflower in the "bee garden." 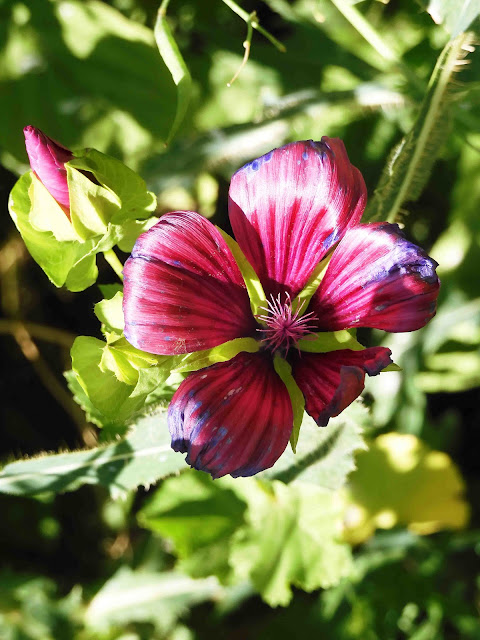 Here's my beet harvest. Most of these will go for pickled beets, but I have a recipe on next week's menu for some Roasted Beet Soup with Creme Fraiche. I made it a while back, and it was good. I'll serve it with some crusty bread and beet green pesto. I'll say more about it when I actually make it. For now, pickling is on the agenda for Monday. 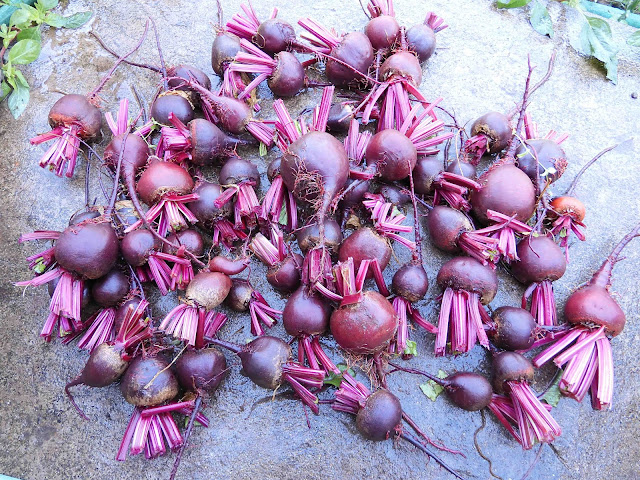 Checking the greenhouse, I harvested the first two tomatoes. The rest are still green, so these are early. 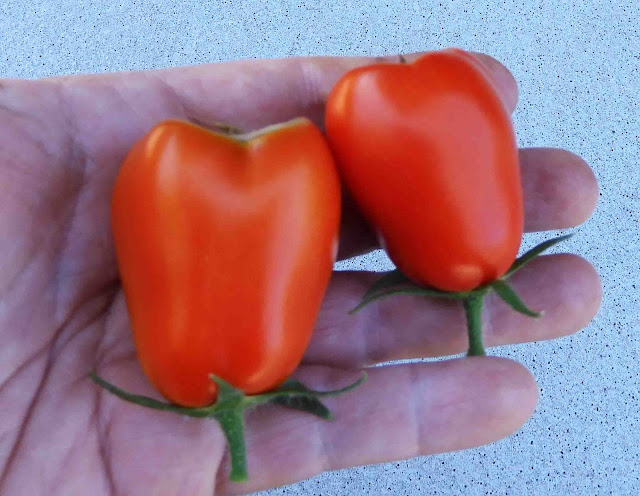 Sadly, they have blossom-end rot. 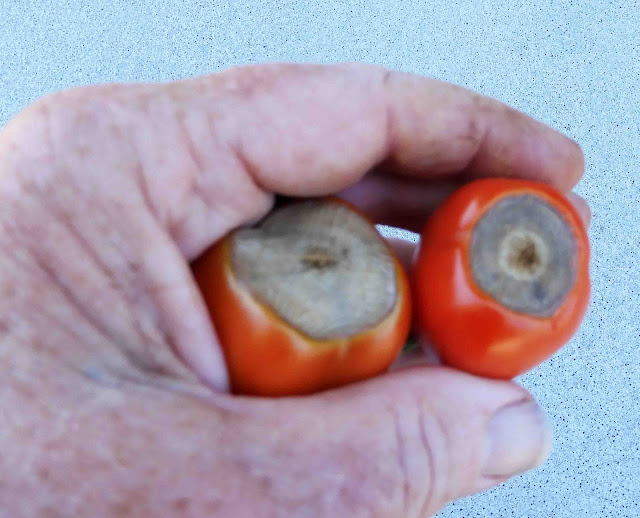 Not to worry. I did some reading about this. It can happen because of a calcium deficiency in the plant, but it's more complicated than that. You can read about it right here. I'm not too concerned because as the article notes, "[t]his can happen especially on the first tomatoes of the season." While I was in the greenhouse, I noticed one green one had fallen on the ground, and it too had the rot. Looking at the others, they all look fine, and so I'm kind of chalking this up to the "first tomatoes" problem. Hopefully, it won't develop on the rest. Mike checked the watering schedule and the moisture in the soil yesterday. We'll keep a close eye on them, just in case this turns out to be a watering problem. Oh yes, and that timing-of-the-harvest problem mentioned earlier? Well, I'm worried about it with these too.

I was reminded that yesterday was National Lemon Meringue Pie Day, which sounded something like a mandate to me. Instead of pie though, I made this Lemon Meringue Tart for Two. 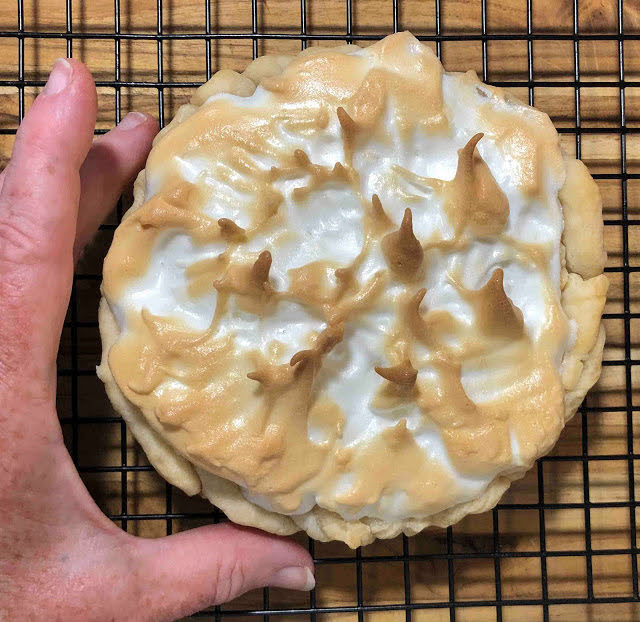 I made this once before while we were traveling. When we're in the RV, I use Pillsbury pie crusts. At home, I decided to try their from-scratch recipe. The recipe called for an even split between all-purpose flour and whole-wheat pastry flour. Since I had a whole bag of whole-wheat pastry flour, I used that, but this could just as easily be done using only all-purpose flour.

Finally, I made my way into the sewing room around 2:00 p.m. My first stop was to make a mug rug for my partner in the Teal Mini Swap. I can't show this yet, although I'm fairly certain my partner doesn't read my blog. It's disappointing that I haven't been able to connect with my partner, despite numerous tries. It's not as much fun when there's no contact. 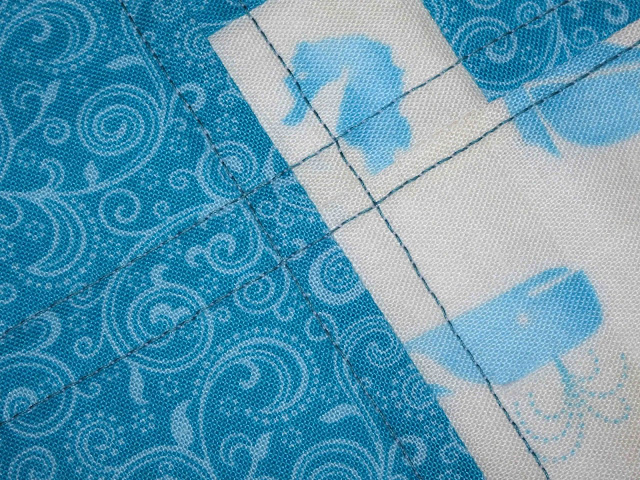 My next job was to add a hanging sleeve to Tuxedo Tales. Smitty has concerns about this quilt.
This notion of cats wearing tuxedos is troubling to me. I hope you're not expecting us to put on formal attire. 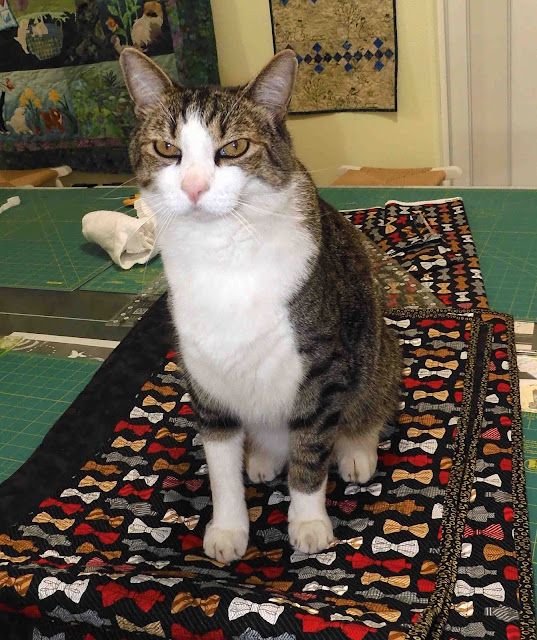 No way, Smitty. There's just no way I'm going to put on a formal in this hot weather. And don't even bother asking me to the prom. Even if I wanted to go, I'd save myself for the quarterback on the football team. 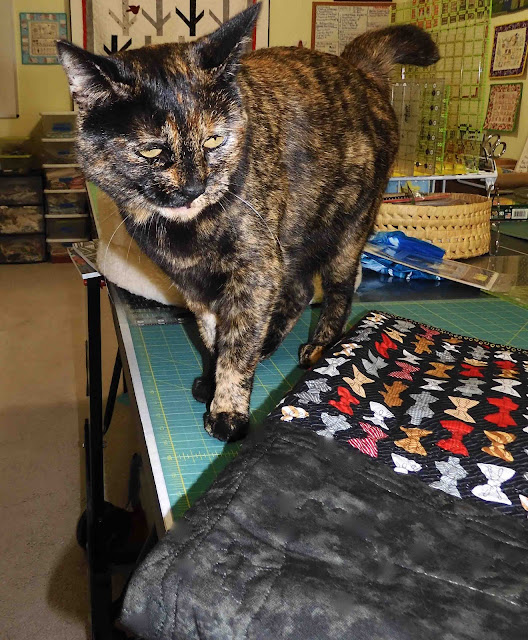 So I had some cut-off fabric from the edge of the quilt, and I made a sleeve from that. 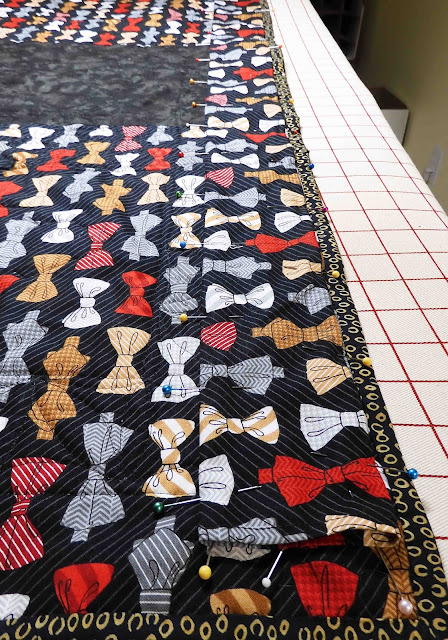 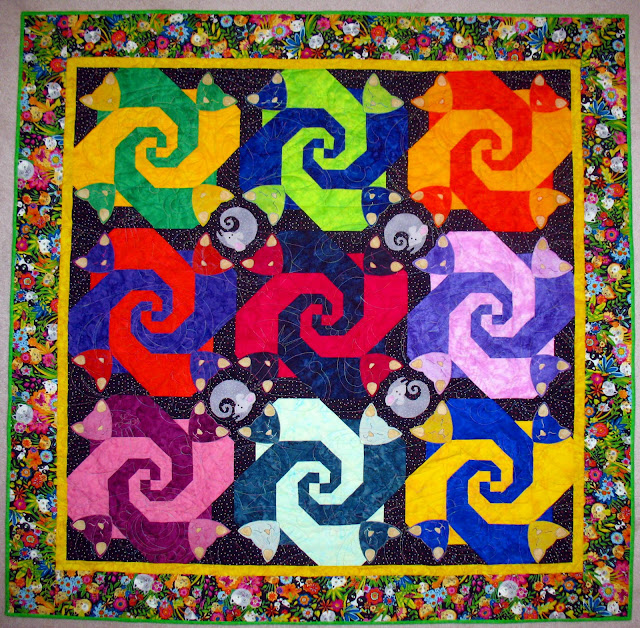 There is still a little room on the first floor for smaller quilts, but this one is too large. You can tour the Mewseum beginning at this post. More recent additions can be seen here, here, and here.
Smitty helped me sew on the sleeve for the tuxedos, and I think he's taking a shine to this quilt. It has excellent napping features. 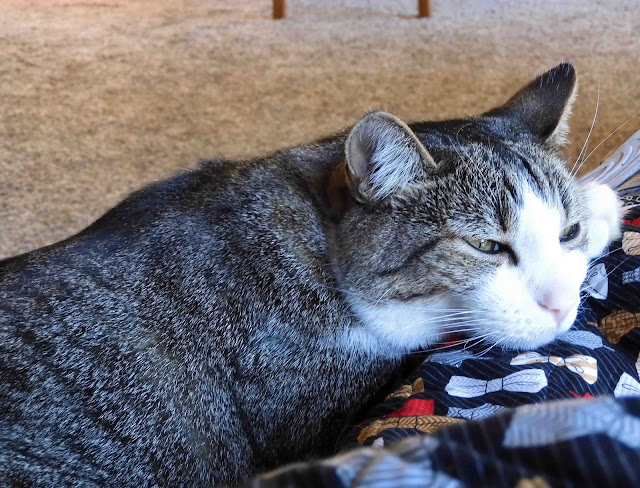 Also, in the hot weather, it seemed like a good time to put out the Outback Sunrise table runner. Cats on the table is usually outlawed, but Smitty tests all the table runners when they're switched out. It doesn't make a lot of sense to him to put out a quilt and not expect a cat to lie on it. 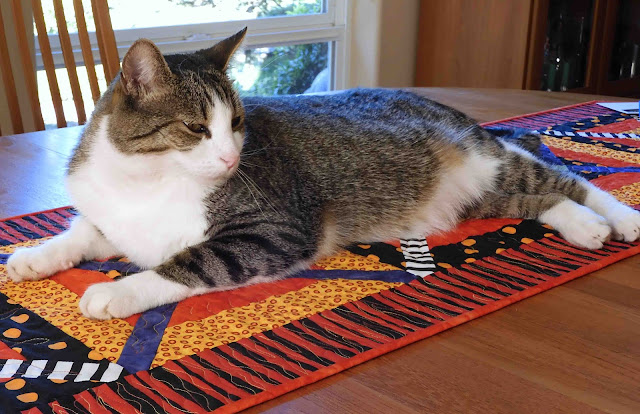 So that brings me to the end of my day yesterday. I'm going to get out early and harvest my green beans. I don't think there are many ready yet, but sometimes I'm surprised. After that, I think it will be a mostly sewing day. Mike and I have considered driving into town for a short outing, but in this hot weather, staying inside also sounds like a good idea.

Just made my aluminum foil tart pan and waiting for my crust to defrost. This sounds like a winner. My camping menu notebook is starting to fill up.

Hi Barbara, just caught up on your posts. Yes to home grown veggies and pies for two, cute kitties and trips to have picnics. You are keeping busy and happy, the pair of you. Love to see what you make for supper and what’s under your needle. Take care now.

98 degrees - uffda, that's pretty warm. Hope you all stayed cool. Pretty sunrise photo, too. Smitty looks good on that runner. Wilbur and I have differing ideas of where he should be, so we're still working on that. Mostly he's on our bed during these hot days, where he can stretch out, stay cool, and snooze.

That sunrise is indeed spectacular. Who knew there was such a thing as Lemon Meringue day - but I suppose it stands to reason because there seems to be a 'day' for pretty much everything. It's been so long since I've had lemon meringue pie....sigh.