A few things have happened ahead of schedule, while some things are in wait-and-see mode. As for me, I'm trying to turn off the parts of my brain that have a lot of practice thinking up things to worry about. Toward the end of the day yesterday, I realized I hadn't taken a single picture of anything for today's post. That always prompts me to take a walk around the house, where there's always some good blog fodder.

Let's just start with the echinacea that are having their moment as stars of the garden. The bees are loving it. As I paused here to take their pictures, I noticed how the bees will mostly just sit on the centers of the flowers, as if in a trance. They seem quiet and relaxed, and so I'm going to think about their calm stillness when my brain starts ginning up things to rile me. 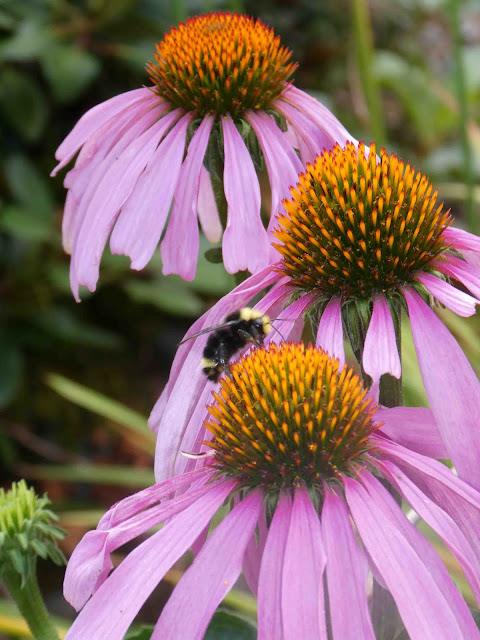 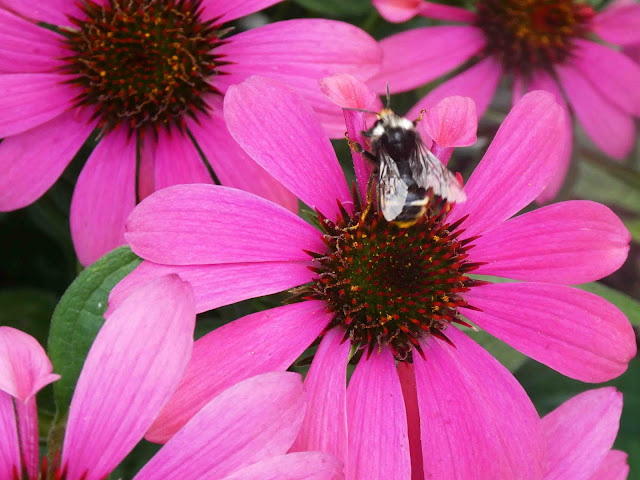 Walking on...I've been checking the greenhouse every time I walk by. There were a lot of naysayers about Mike's solution to the squirrels-in-the-greenhouse problem. Since he finished the job there's been absolutely no sign of digging. They were getting in at the corner toward the back, but it all looks good now. Possibly we'll be able to start growing things in there again the next time we grow vegetables. We're hoping to pull off a trip to Alaska next summer, and so there probably will be no vegetables for at least another summer. 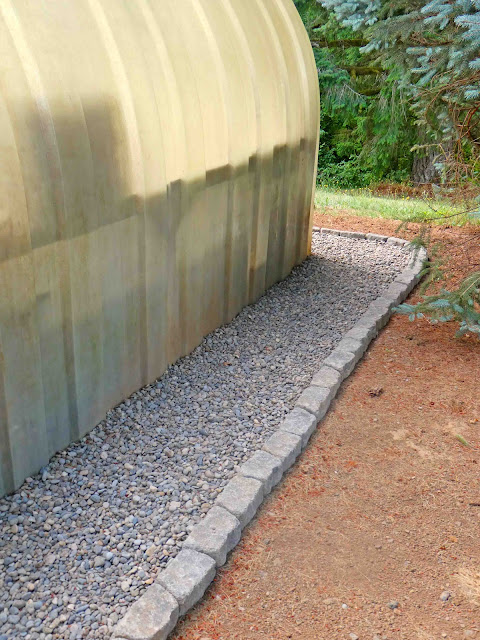 The squirrels ate every single one of my sunflowers this year, and they ate half the cucumbers I planted. We still have three plants left. So far I've harvest exactly four cucumbers. There are lots of tiny ones left on the plant, but I'm afraid I won't get enough for even a pint jar of refrigerator pickles. Better luck next time. 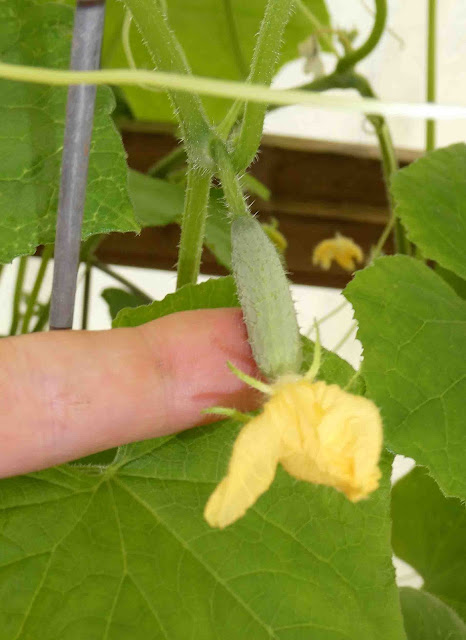 Also on the too-late-for-harvest are the Sun Gold cherry tomatoes. We've eaten a few straight from the plant, but there are scads of green ones that will be left behind. We'll leave them for the house sitter staying here while we're gone. 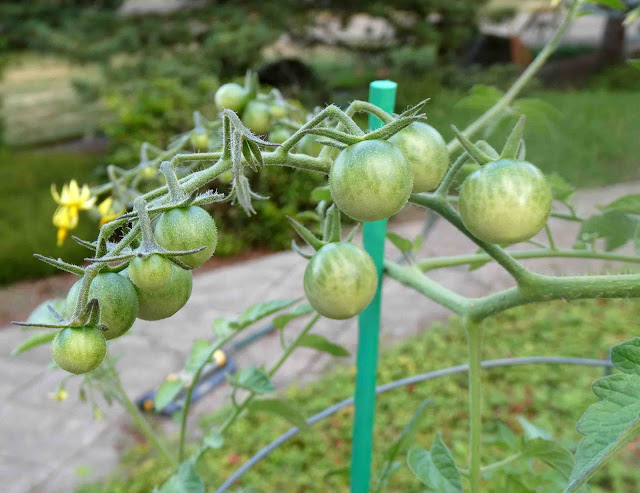 The apple tree produced lots of apples this year. There might have been enough for an apple pie or two...or maybe an apple crisp. Sadly, they too are behind schedule. I blame our cold wet spring. 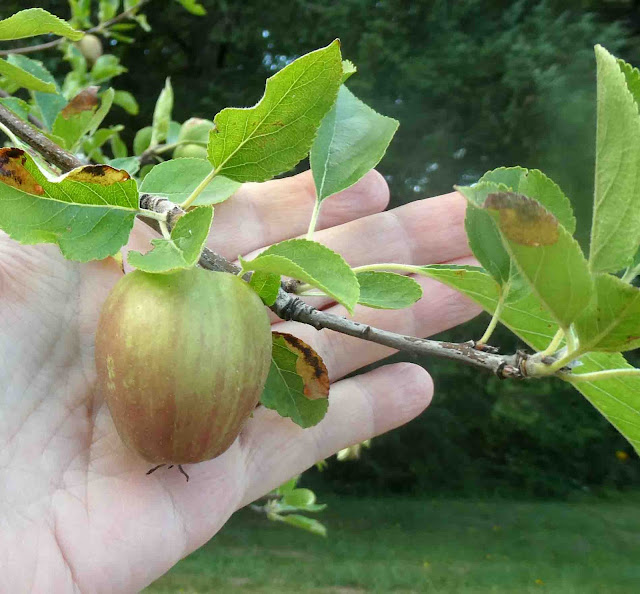 Early on, I checked the plum tree almost daily for any sign of plums. It bloomed during our late April snowfall. After several weeks with nothing, I gave up thinking there would be any plums this year. As I passed by the tree yesterday, I noticed exactly one green plum. It gave its all, but it won't be ready before we go. 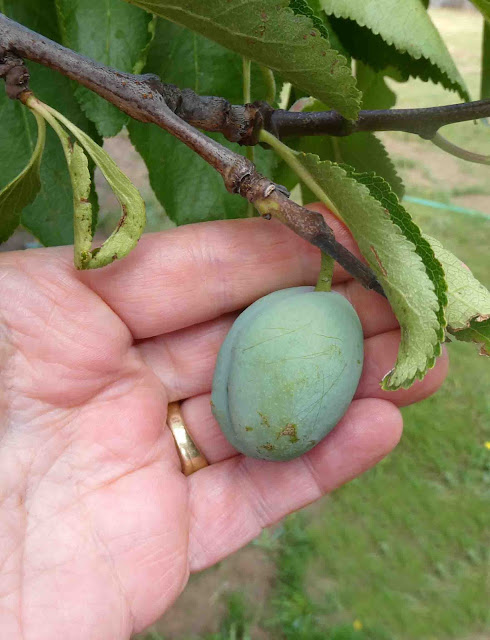 I was on my way to the bee garden where I've had the most gardening success this year. It's basically a weed garden, and so it's hard to go wrong. The flowers are very colorful, and the bees are humming everywhere. 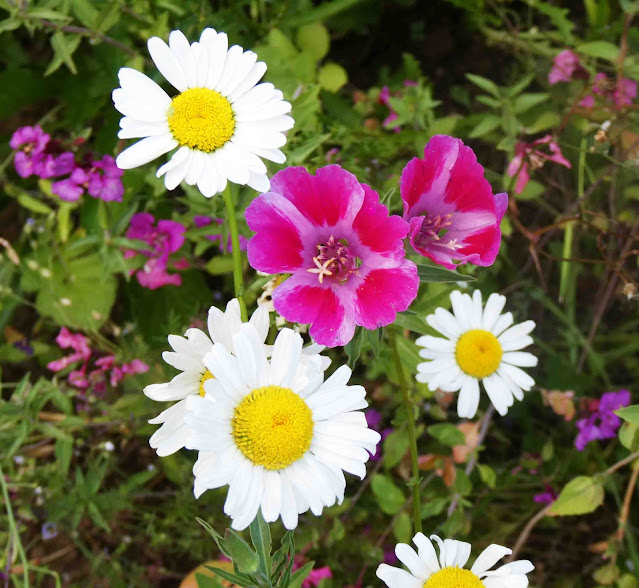 This newby appeared since my last pass-through. It's a Coreopsis. Last year, some of these had darker centers. They may not have shown themselves yet. 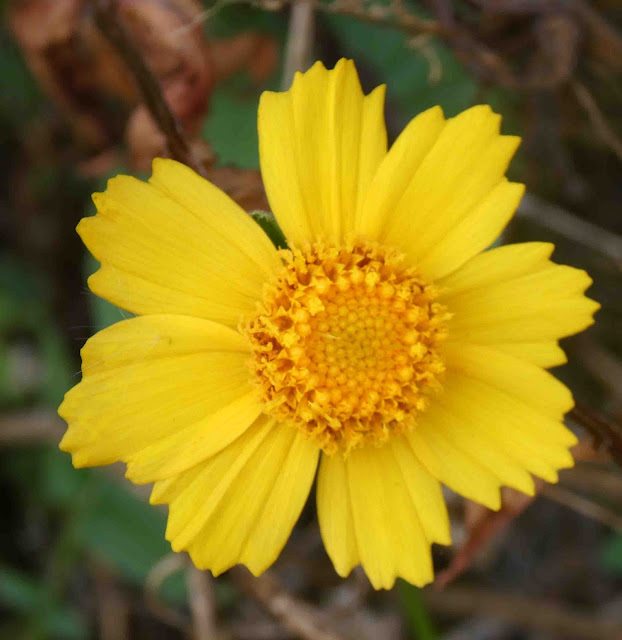 And I noticed more of the Evening Primrose. These were not in last year's mix, and so they surprised me with their appearance this year. 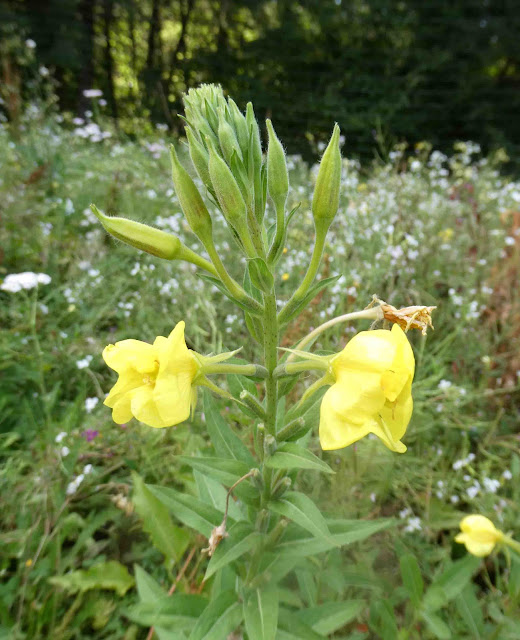 Several of you suggested I come out at sunset to watch their bloom. I might have been too early or too late, but I enjoyed them anyway. 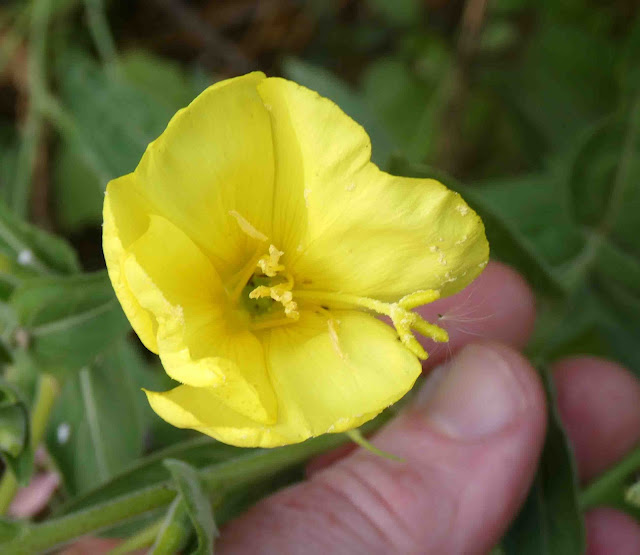 Heading back to the house, I noticed these two pink dahlias in among the potted dahlias. 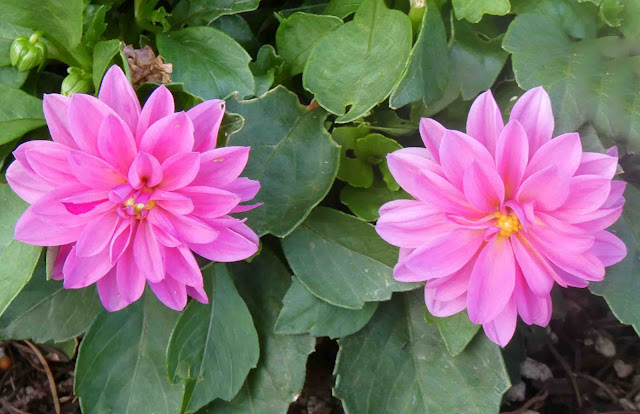 I spent a little more time on my slow-stitching. This is my challenge piece, so you only get a peek. 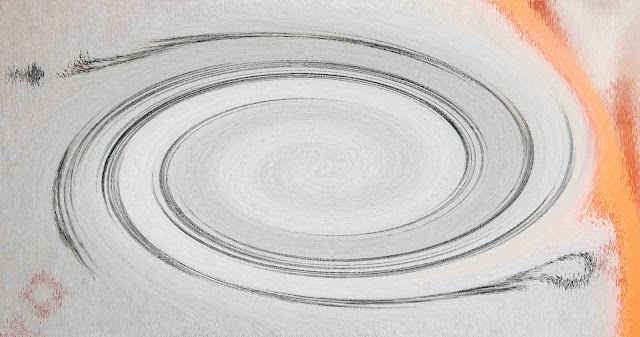 Miraculously, the contractor sent a crew a day early to move the furniture back inside the house. How do you like what we've done with the place? 😞 (Sigh.)

Miss Sadie seems to have found her center again. She's been showing herself more, rather than hiding in my office. Yesterday, she played with some of her toys. She's the only cat we've ever had that actually played with her toys. This morning I left her snuggled up in her quilt, snoring. We have to apply Advantage to the kitties before we leave, which always turns into a fight practically to the death where she's concerned. I've been strategizing about how to least disrupt her serenity. It might be best to do it at the same time we deliver her to the RV for travel. Both things are stressful for her, and it seems as if combining them will mean only one strike against us, rather than two. 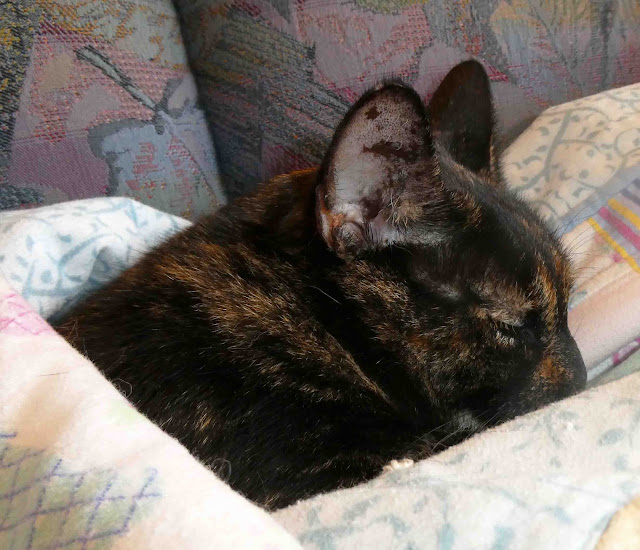 Smitty takes it all in stride. He's like Mike. Worrying and getting bent out of shape is women's work. The basement has been closed to them ever since the work started downstairs. It means their house is 2/3 the size it usually is. Smitty has given up guarding our upstairs bedroom, and he's even allowing Sadie on the bed at night now. Miracles never cease. 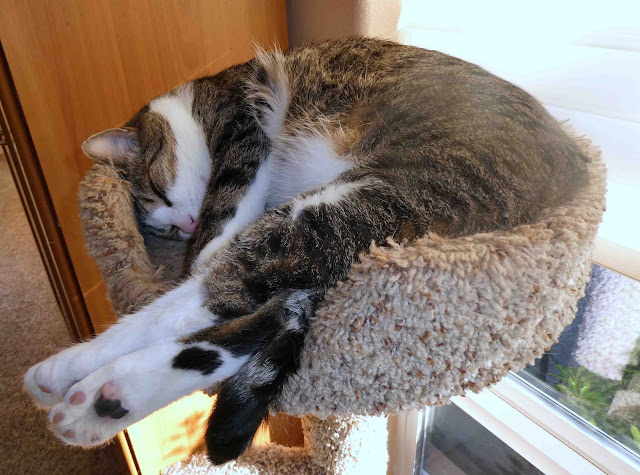 We're having dinner with some friends visiting from Texas this evening. Aside from that, I'm in laundry and packing mode. The next several days will be busy with packing and cleaning, and I'm not sure I'll have much to tell you beyond that. Let's just say I'll blog if I have anything of interest to say...not that anything I say is "of interest," but you know what I mean.
If I disappear for a few days, you can count on hearing from me again, probably no later than Sunday. If you've traveled with us before, then you know we're at the mercy of wi-fi and cell phone signals. I'll always blog if I can get internet access. If not, we'll have to catch up in our time traveling machine. Rest assured, I'll tell you every single itty bitty detail of our trip, no matter how trifling or minute. That's just how we literally roll here at the Traveling Three Cats Ranch. I hope you'll come along.
Posted by Barbara at 8:55 AM

Glad to hear that the folks did show up to move your furniture…
Looking forward to traveling along on your trip….I always enjoy going along, seeing and hearing about all the places your travels take you.
Wishing you safe travels!!
Sandra B
scb304@juno.com

Wow, your garden looks gorgeous. Shame on those squirrels for eating so much. How dare they eat all of your sunflowers. They need to be lynched! Interesting about your Coreopsis having different colors of the center one season to another. Thinking back on it, I've seen that happen in an old garden of mine (no longer live there), but kept thinking I must have planted a different version. Either way, you've reminded me how pretty this plant is and inspired me to plant it where I'm living now. It grows well in hot & dry southern California.

Have fun on your adventure.

Enjoy the trip. Everything else can wait.

I broke a few branches of green tomatoes off my plants before the first frost and just laid them in a box in my garage. The tomatoes all turned color a week or so later. You might want to take some of the little Sun Gold cherry tomatoes with you. I think a lot of our winter tomatoes are picked mostly green and they ripen on their trip north to the grocery stores.

Thanks for the wildflowers. As I've said before, I'm homebound mostly due to difficulty walking, but I feel as if I get vacations following along on yours. You bring it all to life in such a witty way. I've got 2 indoor cats also. And Gus pushes his little rescue sister Harley around too, so I enjoy the antics of yours. How about the climate bill finally passing? Yippee.
I mainly do small New York Beauty quilts, as they are easy for me to handle with my muscle limitations. Anyhoo, I just wanted to let you know how much pleasure you give me with your blog. - Janis

I'll be along for the ride/trip. I'll be quiet and wont take up any room, you will hardly know I'm there.
I saw on the TV news the other night a story about Death Valley and remember you travelling there. There was flooding there of all things, hard to imagine!

That’s a shame you won’t be home to taste the plum or apple. As for the greenhouse, type this in the google search bar: Top 17 Winter Vegetables to Grow in The Garden. Have fun on your trip, looking forward to your blogs.

Glad to hear that your furniture is "in" even if it is "Higgeldy-piggeldy"--!!
I hope all goes well for your take off on your trip--
Looking forward to virtually traveling along with you...hugs, Julierose

Waiting to travel with you!

I have to say major disruptions in my schedule sets me backalso. I totally understand Sadie's adjustment issues. I never thought I was feral though, he he. Havea great trip, I'll be along thank you for the invite.

Glad you've managed to get everything inside without having to call-up reinforcements.
I think what I love the most about 'our' trips is that you do all the planning and packing, Mike does the driving and I just enjoy the view!!!
It's a pity the fruit couldn't stick to the schedule but.... There's always another year.... Happy and safe travelling.
Xx

I absolutely love going on your trips through your blog. Thank you for all your great photos from home and when you travel. My feline girls, Lola & Lucy, send their greetings to Sadie & Smitty. Praying you have safe traveling.

Gosh, this tale of travel will go down prefaced with carpet woes. I'm sure you could come up with a more clever title! Anyway, I'm glad the furniture is back in the house. Hope the packing and prepping goes well! I'm excited for your trip!

Oh yes, I fully plan to travel right along with you, at least in my mind. Closest I'll get to a trip now that DH has developed sciatica unless we fly which isn't half as much fun.
Wonder if, thinking about bees sitting quiet on the flowers, if they get high on pollen.