The day we leave is nearly here. We've spent the past several days packing and preparing. Mike has worked all week getting the RV in tip-top condition. It's been frustrating for him at times, fixing one thing, and then discovering something else that needs fixing. I believe he has it all done now though. Just before sitting down here, I found him washing the RV. That's always the last chore before hitching up.

Yesterday, I took some time to snap a photo of the state of the states. If you were with us on our last big sight-seeing tour around the perimeter of the USA, you might remember when we added the last state for that trip...Louisiana. Here's what the map looked like then: 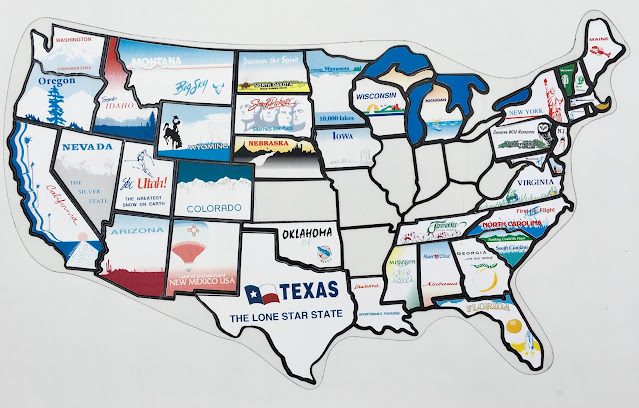 That picture was taken in January of 2018. Since then, we've sold the RV we took on that journey, and we have a new one now. The old RV had fiberglass siding and decals for decoration. The map was stuck right to the passenger side wall. The new RV has a paint job thoughout, and so we've hesitated to stick a new map on it. It didn't really matter when we weren't adding any new states.

For this trip, however, we're adding four new states to the map. We ("we," meaning "I") really wanted to continue filling in the map. We'd seen folks sticking them to the sides of their slides, and we decided to do it that way. It can only be seen when the slide is open, but it's better than nothing. About a month ago, I added all the states to the map. I was sitting in the darkness of the RV on a low stepstool when I did this. Some of the states got a little cattywampus, but I still think it gets the point across. I give you the state of the states on the new RV: 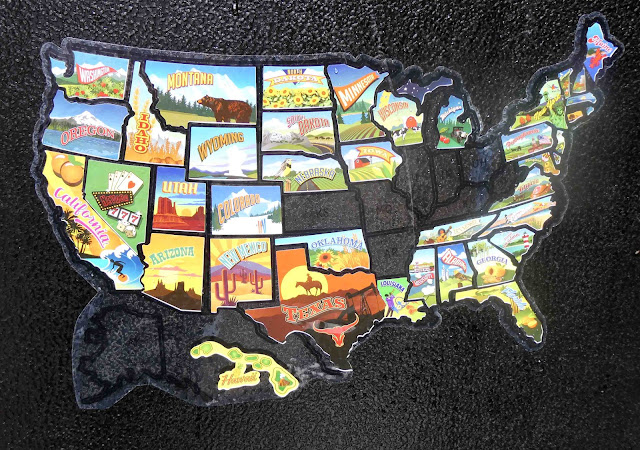 This trip we'll add Illinois, Indiana, Ohio, and West Virginia to the map. Of course, I will keep you apprised of every sticker added.
Also, I'm including a map of our route from the RVParky app...I'm so happy to have found this app. It's been on my phone for years, and I only recently discovered its many talents. 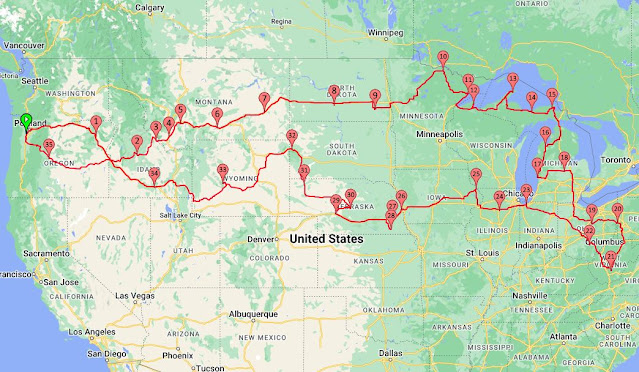 Our journey will be approximately 8,000 miles when you include driving around for sight-seeing at our chosen destinations.
You might recall I rerouted the beginning of our trip because of a wildfire burning a little too close for comfort in eastern Idaho. Probably we could have gone, but we didn't want to chance it. Recently, it occurred to me that we could see those areas on the way back. Our final planned stop is in Lander, Wyoming. We wanted to see Lander on a previous trip in our truck camper, but then had to reroute after some mechanical difficulties. I'm hopeful nothing like that will happen this trip. When we finish in Lander, there are multiple ways we could come home. It occurred to me that we could drive up through Jackson, Wyoming, through Teton National Park, and then cross into Idaho at nearly the same place we'd planned originally. It will only delay our return home by a few days.
So here's our alternative ending, weather permitting. 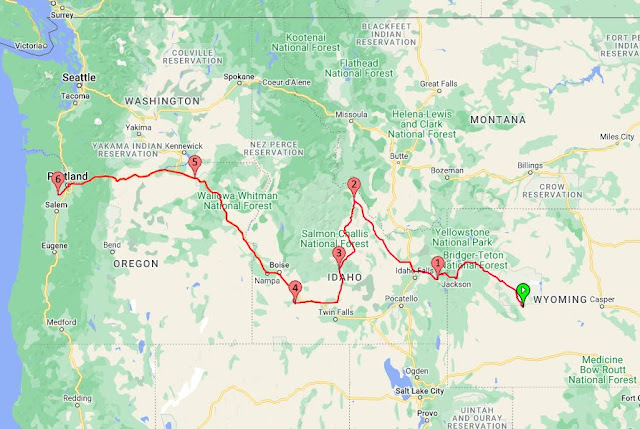 It will be nearing the end of October by then, and so snow might have already fallen. If that's the case, we'll bag this whole effort and return home via a more southerly route. We'll keep an eye on the weather and make our decision when the time comes.
Tonight we're having dinner with a couple of people who'll be keeping an eye on the house while we're gone, picking up our mail, etc. One of them will move in after we leave. Since our guest room is still a shambles, we'll change the sheets on the bed tomorrow morning, and they can use our room while we're gone. Mike has the sprinklers all set up on timers so that watering can continue while we're gone. It'll keep things from burning up since we're still getting some hot summer weather at our place.
Tomorrow evening will see us in LaGrande, Oregon. It's our usual first stop when we travel east. I expect to have wi-fi and a good cell signal there. When we move on to Stanley, Idaho, the next day, we probably will not have signal, and so we'll have to time travel to catch-up. You might want to make sure your time-traveling immunizations are up-to-date.
Okay, so maybe no post tomorrow, but probably by Monday I'll have something to tell you about our drive, and about the RV park in LaGrande. We stay there often, and there's always plenty to see just wandering around the grounds. Signing off now. I'll see you on the other side.
Posted by Barbara at 12:40 PM

Once you have traveled, the voyage never ends, but is played out over and over again in the quietest chambers. The mind can never break off from the journey. ~ Pat Conroy

Safe travels! Thanks for taking us along :-)

Have a wonderful trip! I'll be following along and enjoying it, I'm sure.

WOwser that is quite the trip!! I wish you all the best and hope you enjoy it fully and have good luck...hugs, Julierose

Have a wonderful trip!

Have a wonderful trip and be safe!!!


Safe travels and have fun. Hope it's a smooth trip. You will be coming very close to me but your last itinerary update showed you were not planning on stopping.

This is awesome! We are about to head from New Mexico to Florida in our Tesla. The trip will take us 17 days, 5 destination cities. We were wishing that each of the Tesla Superchargers had stickers for us to collect. I may have to get creative and design my own.

Looking forward to travelling along with you. Always enjoy reading about your adventures.