As always, my day started with slow-stitching, and I filled in some more of Calendula Patterdrip's broom straws. 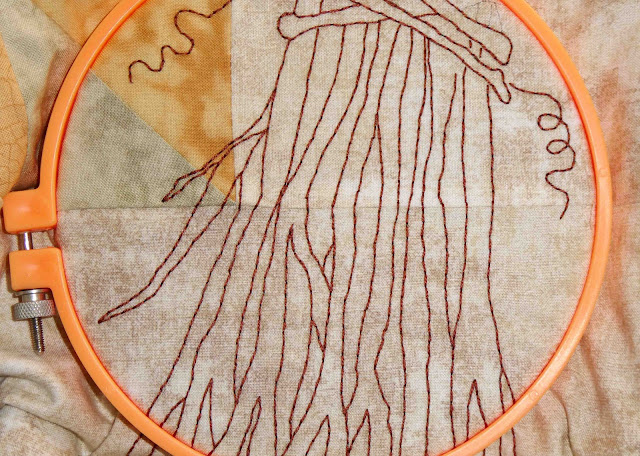 I've moved my hoop up to where all the straws are tied to the broomstick. It should start going faster now. I'll pick it up there this morning.

My day kind of went off the rails yesterday. There I was, minding my own business, checking the list of to-do's on the day's calendar when I saw a note to "make reservations at Iowa state parks." When we take our Great Lakes tour later this summer and fall, we're trying to stay in as many state parks as we can. The state parks are less expensive (and more interesting) than private RV parks, and so I've really endeavored to take advantage of them for this trip. With the price of fuel right now, every little bit helps. And many of the state parks have "reservation windows" so that everyone has a chance to get a spot if they're paying attention.

Okay, so Iowa...there was one park where I needed to make a reservation. Plenty of spaces were available. We wanted to arrive on a Saturday and stay two nights. But I was thwarted when I learned that if one arrives on a Saturday, one must also reserve Friday. Well...that simply wouldn't work. It would throw off everything that came before, and so I needed to make other arrangements. We'll still see the park, but we're going to have to stay elsewhere. And realizing that...the rest of the day became a manic, panic day of making reservations and rerouting the trip. It meant no sewing, and plenty of teeth-gnashing.

Also, I figured out that after September 30th, pretty much all the municipal parks (state, county, and city) go into first-come-first-served mode, and so I wasn't able to make reservations at many places. It's a little worrisome not to have a guaranteed place for the night when you're towing a big fifth wheel. That late in the year, it shouldn't be a problem, and so I'm laying my worries aside until we're actually on the trip.

Since routing the trip back in May, I've changed the route slightly once we start heading west again. Here are the route maps I've created. You can see where we're going. I can only list ten destinations per page, and so each page begins with the last destination from the previous page. Also, I've listed certain cities, not because we're going to stop there, but because I wanted to keep us on a certain route, in order to travel scenic byways. So here's the trip as it stands. It could still change:

So there was no sewing, but plenty of cooking yesterday. As I mentioned in yesterday's post, I made a couple of cold salads for our dinner last night. It was warm enough to eat outside. Mike asked for this family-favorite Seafood Pasta with Lemon-Saffron Herb Dressing. 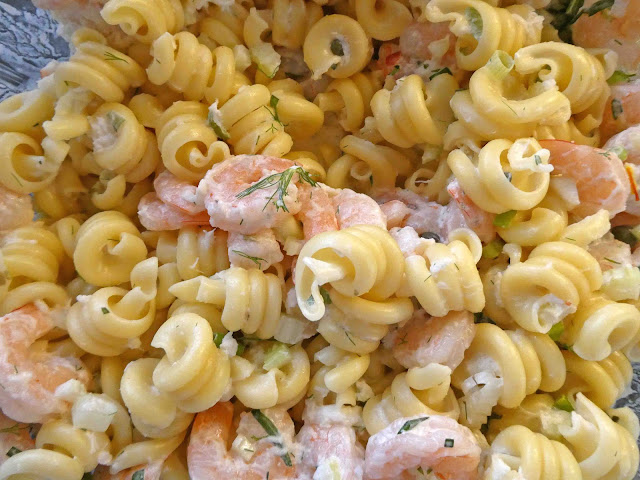 Usually I make this using the trumpet-shaped campanelle pasta. It holds onto the dressing well. When I can't find it, this trattole shape is a good choice. Also...saffron. I am very fortunate to have been gifted with a lifetime supply. I've kept it in darkness inside a metal can that seals airtight. It continues to maintain its fragrance, and so I figure it's still good. It's very expensive though...ridiculously expensive...and so you can leave it out. I promise you won't notice it's missing.
But it seemed like we needed more than just a pasta salad, and so I also made this salad of beets and orange sections: Beets with Orange Vinaigrette. This is so easy and yummy. It was a good choice as a side dish. The recipe calls for raspberry vinegar, but you can substitute something else. I've used sherry vinegar before, but apple cider or rice vinegar would work just fine. 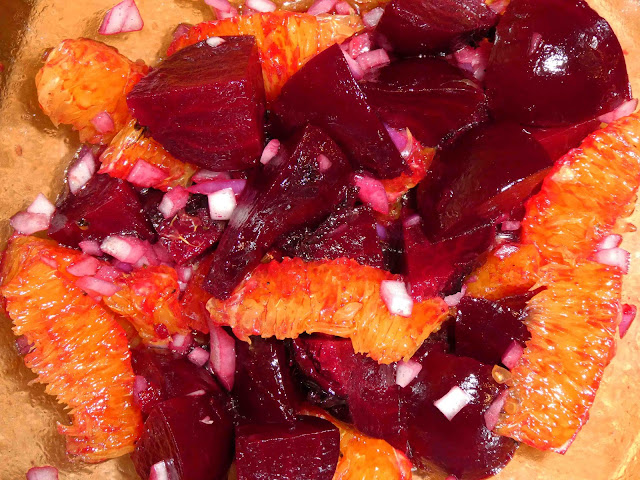 And then, I had a yen for this favorite summer dessert. These are Root Beer Granita Floats. You need just three ingredients: One liter bottle of root beer, vanilla ice cream, and Pirouettes cookies. (The Pirouettes are optional, but hey...any excuse for those is a good excuse.) 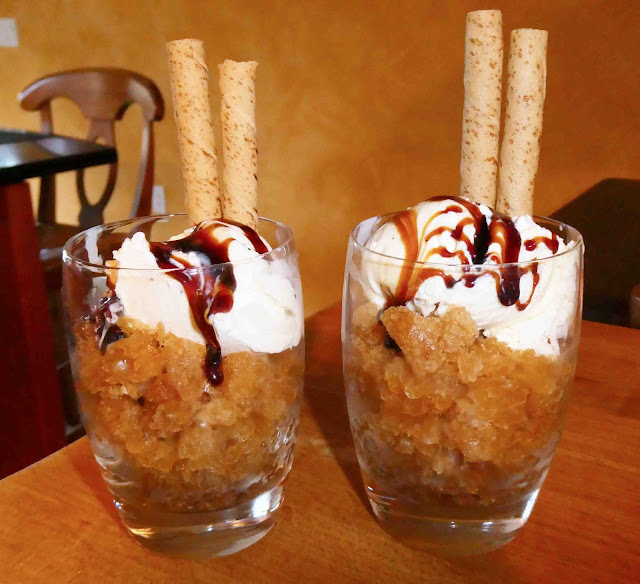 This is super simple. You pour 4 cups of the root beer into a 9 x 13 cake pan. Put it in the freezer, and then check on it each hour, and scrape or "fluff" it with the tines of a fork. Eventually, you'll have root beer ice that looks like this: 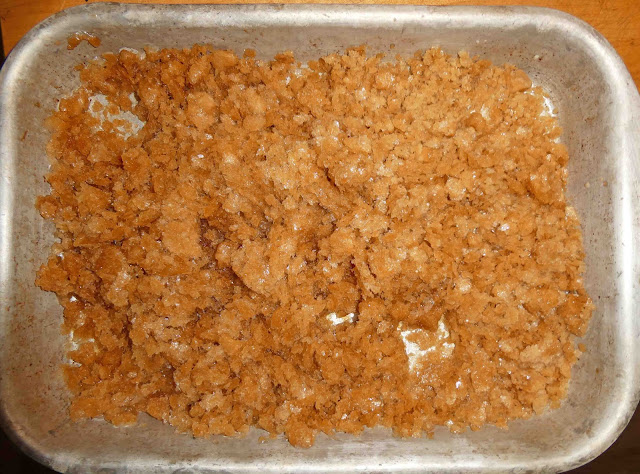 Then boil down the remaining root beer into this root beer syrup. Just put it in a pan and boil, boil, boil, until it's reduced to one-half cup. Mine took about an hour. 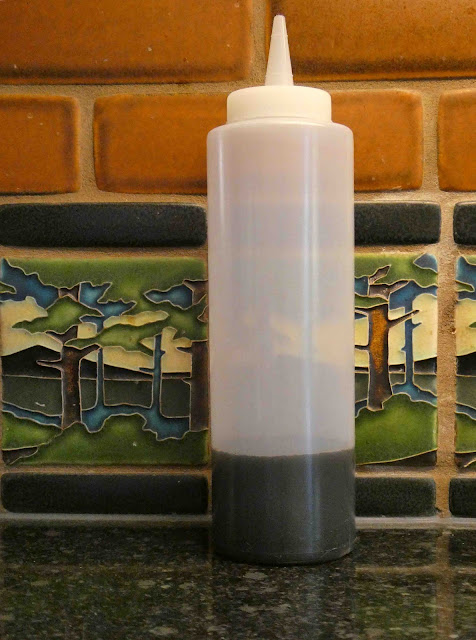 And that is one tasty and easy dessert on a hot day. Mmm, mmm, mmm. It's a great choice for the Fourth of July.
Okay, so it's time to choose a goal for July's

Since I'm half expecting to be kicked out of my sewing room this month when new carpeting is installed downstairs, it seems wise to choose something I can work on in the upstairs quilting room. Next up is Ella's Flower Garden. My July goal is to quilt and bind it before month's end. 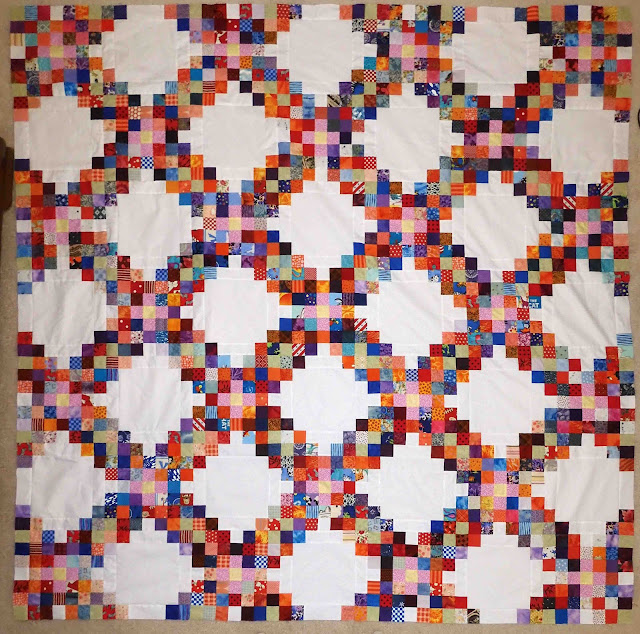 If I'm really good, I can have it along for hand-sewing the binding while we're on a week-long trip mid-month. That's probably too much to expect, however.

Okay, time to get on with my day. I'm determined to finish up the New Mexico Kitchen block today. Nothing...and I mean nothing...is going to stand in my way.

Traveling – it leaves you speechless, then turns you into a storyteller. ~ Ibn Battuta

I've been to Sleeping Bear Dunes in Michigan. There are dunes to climb, they are a good exercise and areas to walk around. we've enjoyed it. Our daughter lives close by so she takes us there when we visit. Enjoy!

Fun to see your route and itinerary, and I'm already looking forward to your posts (when you can). Your food is making me drool. I need to try that pasta salad!

Great deal you've done those broom straws-- yay!! The took a long while...

I love that Ella's Flower Garden[--but no more big quilts--]I wonder as I gaze at it in "undisguised envy!!!!" ;000--if 4 of them would look good for a small size??? A diamond shape??? or 3 for a heart like shape? I am finding it really hard to find smaller patterns that I like--so used to big quilts...
Working on my little fabric pages is keeping me happy in between though...

Hope you've gotten those reservations straightened out--that is one long trek you'll be taking...how neat!!I say "Go while you can" for sure!!
hugs, Julierose

I probably sent this before but it looks like you will drive by Amanda Colonies in Iowa. There is a nice shop maybe called Fern Hill right near the highway. The shop sells quilts, fabric, antiques and desserts I think. Then in the Colony/town there is another nice quite large quilt shop but I don’t remember the name. There was a nice ice cream shop there and several restaurants etc. there was also a regional theater that we enjoyed one evening. Have a fun trip. I be living it vicariously with you and your blog!

What a great trip you are going to take. Thanks for the recipes, they all look wonderful!

Love the progress of Calendula Patterdrip's block. The seafood pasta salad looks so good I'm going to try it and the Root beer Granita too. You travel plans have me a bit envious. Safe Travels and happy stitching to you.

Your traveling takes a lot more planning than I realized. That is quite a long trip with lots of interesting stops planned. That beet salad looks very tasty. I hope you get to do some sewing today.

Your Ella's Flower Garden quilt is gorgeous -- can't wait to see how you'll quilt those blank white spaces. And oh my, does that beet and orange salad ever look good! I've never had anything like that before. Lately I've been loving summer salads made with watermelon that have popped up on the seasonal menus at a few local restaurants -- like strawberries with watermelon and basil, or watermelon with cucumber. We just ate the watermelon plain when I was growing up so now I feel like this is a whole new world of watermelon that I never knew about -- same thing with your beet salad! Who knew you could do something with beets besides just plain beets?! :-)

Love the intentional pink flowers with yellow centers in this quilt. Very cute. I've never seen it like this before. Thanks for the recipe links!!! Yum.

Really wish I liked the taste of root beer because those look so good.
Your trip is shaping up - hopefully the gas prices lower substantially before you head out.