If Tuesday was a lazy morning, Wednesday's could be described as slow. I managed to accomplish everything I wanted to yesterday, but I was moving through the day at a snail's pace. Sometimes I have to remind myself there's no time deadline for anything. Today I'll be dragging my feet again because it's a grocery shopping day. Also, I need to water the flower pots, and so it will be afternoon before I can get any sewing done.

On the slow-stitching front, I've nearly reached the top of Calendula Patterdrip's broom straws. Yesterday morning I filled the rest of my hoop. 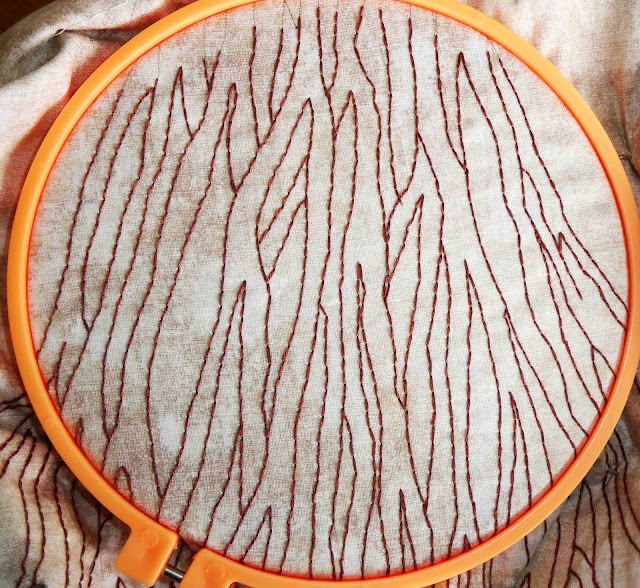 Here's what I've stitched so far.

And next, you can see that I've stitched up to where the straw is attached to the broomstick. It'll be good to move into an area not so densely stitched. 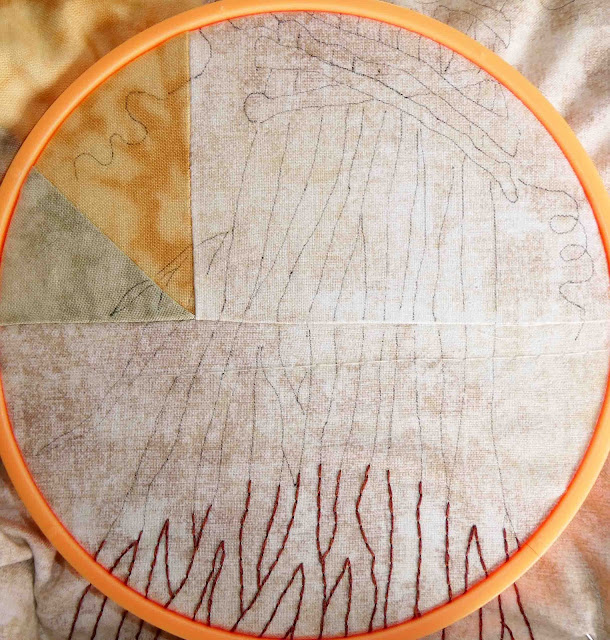 The kitties and I went out for a stroll around the garden after that. Oh my...the rose bush is covered in flowers now. The deer must be off their feed. 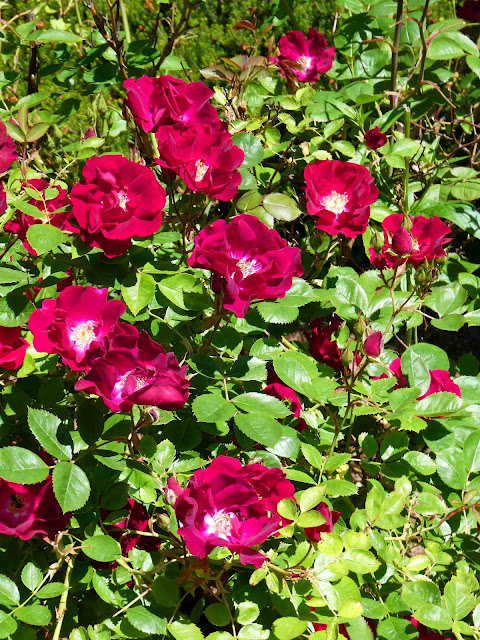 Also, I noticed the hens and chicks are putting up flowers. 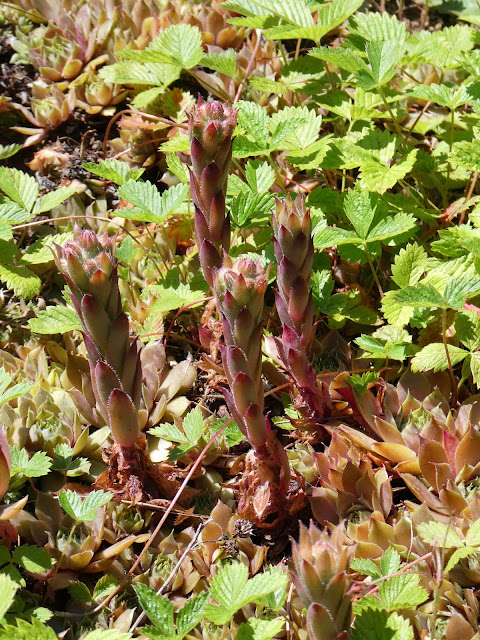 These will bloom in about a week or so. They are the funniest flowers and look like they should be in a Dr. Seuss book. We were in the middle of our "heat dome" last year at this time, and temperatures were reaching above 110°F. The hens and chicks didn't bloom in that heat, and so I haven't seen them in a while. They're being inundated by the wild strawberries that share their bed. Looks like I'm going to have to do some weeding, and soon.
The first flowers have appeared on the echinacea now. They'll soon become the most watched thing in the garden. 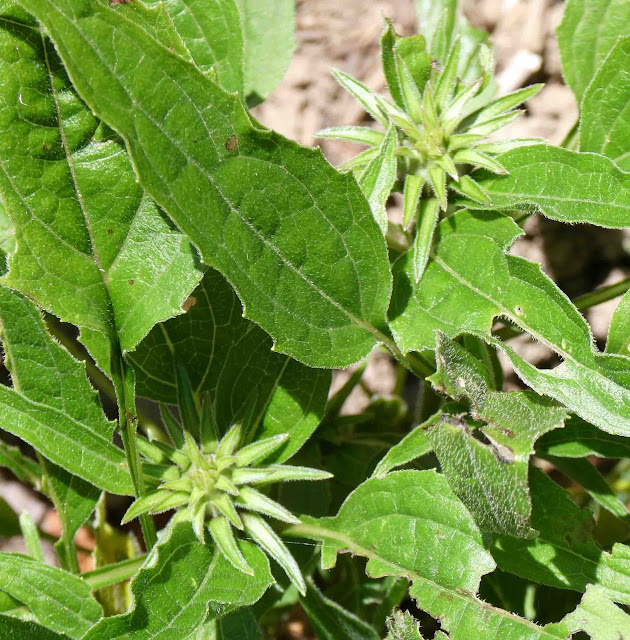 Right now, I'm watching the daylilies. They should be opening any time now. 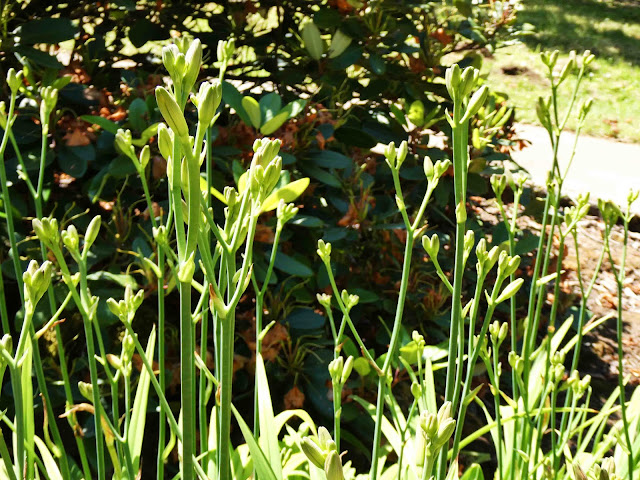 And there's the lovely lavender. It's my favorite fragrance. I'll be cutting some of this to dry and save for next year's Bees Knees cocktails. 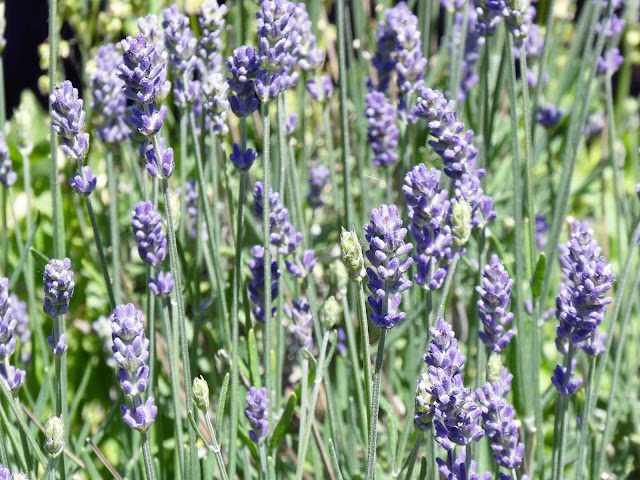 Also, I wanted to show you how nicely the wisteria is filling in above the front door. We had to replace this last year when our old one died. I'm surprised at how fast this one is filling in, but I haven't seen any flowers yet. It might take another year to establish itself. 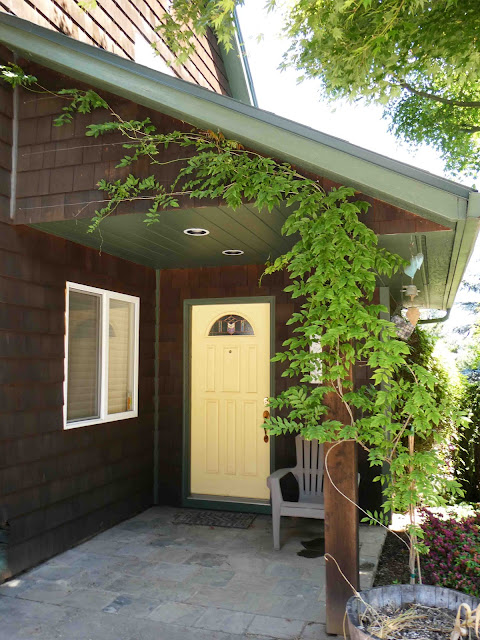 Now, where is Smitty? Has anyone seen Smitty? 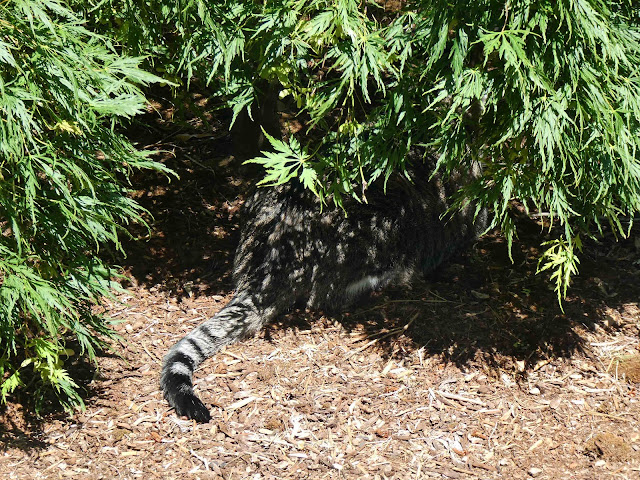 Back inside, I found him ready to finish up the applique on the last New Mexico Kitchen block. 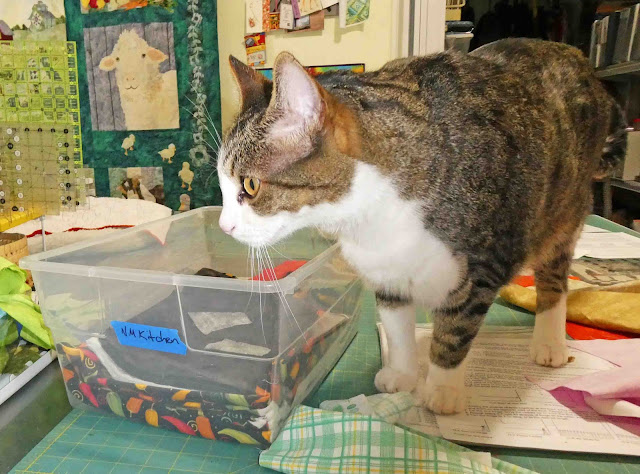 Here's the recipe that accompanied this block. I had a picture of it for yesterday's post, but realized I'd cut it off on both sides. So here you go. I've never had Posole myself, and so I don't know if it's good, or if this recipe is any good. Go ahead and try it if you like. Just let me know what you think.

When I finished sewing for the day, all the applique was finished. That jaggedy green thing on the left is supposed to be "oregano." It gave me a chuckle. Oregano doesn't look like that. It looks more like parsley to me. 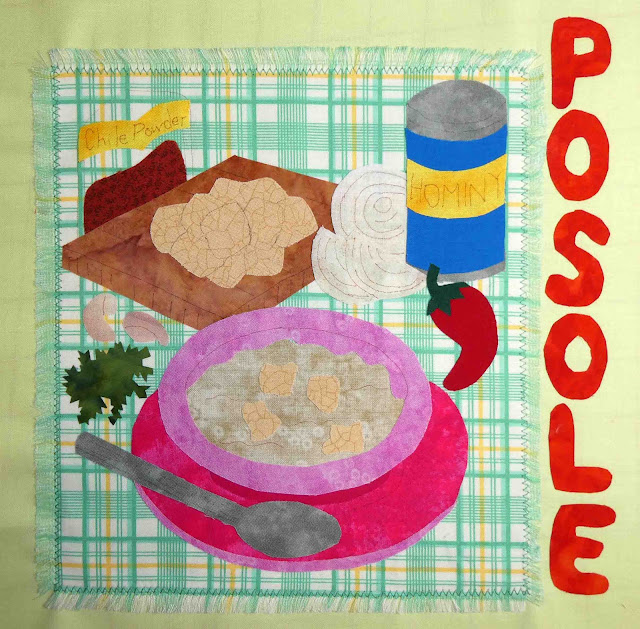 From here, I'll need to do the top-stitching, and there is a little bit of hand embroidery to do. When that's finished, I'll add borders to the block, and that will be the last of them. Yay! I'm going to love this quilt, but I am getting tired of working on these blocks.
Okay, so grocery shopping this morning. The list is quite a bit shorter than last week's list. We're going to do some recycling, and I need to water the flower pots. Other than that, it'll be all sewing all the time...and it won't be a lot of time.
Posted by Barbara at 8:04 AM

Some people are always grumbling because roses have thorns; I am thankful that thorns have roses. ~ Alphonse Karr

I just love this group of blocks you've been working on. Going to be such a cute quilt! When you showed your wisteria, it made me shudder (LOL). I have a wisteria bush and that thing is a pain! It grows faster than a weed and those branches twine around everything. I whack and whack and it grows and grows. I didn't plant it--it came with the house. One of these days, I'm taking it out somehow. The short-lived blooms don't make it worth all the whacking.

There's a lot of stitches in that broom! I look forward to seeing your New Mexico blocks as a quilt top. I know you haven't enjoyed working on them, but it will definitely have a story! The wisteria looks so nice by your door!

Just finished doing our grocery order (oh, the joys of curbside pick up!!). I have always hated grocery shopping and must thank covid for the intro to curbside.
We drove by a field of lavender on Thursday - what a sight! I, however, will give it a wide berth lest I trigger an allergy attack.
Seeing your wisteria reminded me of the one we planted at our old house. It grew astonishingly well but never blossomed. Not, I suppose, overly surprising when you consider it's not even supposed to grow at all in this northern climate.

I l-o-v-e posole. This recipe seems to be a quick version. My recipe uses seasoned pork shoulder, stewed tomatoes, and roasted poblano peppers (they're sweet, not hot). It simmers for several hours and is more of a stew than a soup. Yes, it's a bit of work, but I make a big pot and freeze at least half for an easy future meal. Even here in Texas I've never seen it on a menu. But I once bought a commercial-size can of hominy in clearance and, after a quick recipe search, decided to try it. I encourage everyone to try it.