My morning routine generally begins around 5:00 a.m. Mike and I are fairly early to bed...old people that we are. And then I'm generally up pretty early. When I was a teenager, I could easily sleep until noon, but now my body starts telling me it's time to get up and move those creaky joints. So, I get my coffee, check in on Facebook, play my word games, read my email, and write my blog post. By then, Mike is usually up, and so I make breakfast, and then do my slow stitching. And now...I'm doing a short exercise routine after my slow-stitching and before my shower. Oh yes, and let's not forget the part where I love up on my cat. 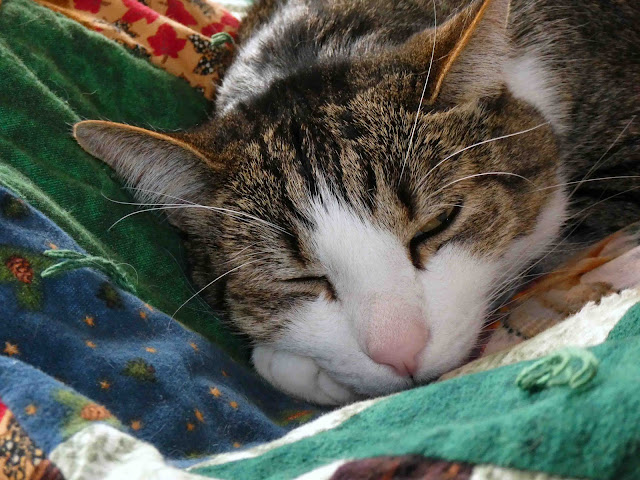 Also, I must suffer the disapproving gaze of Miss Short Tail, who yearns for the door to open. Here, she's using her pawsome powers of pawsuasion to encourage me to let her out. 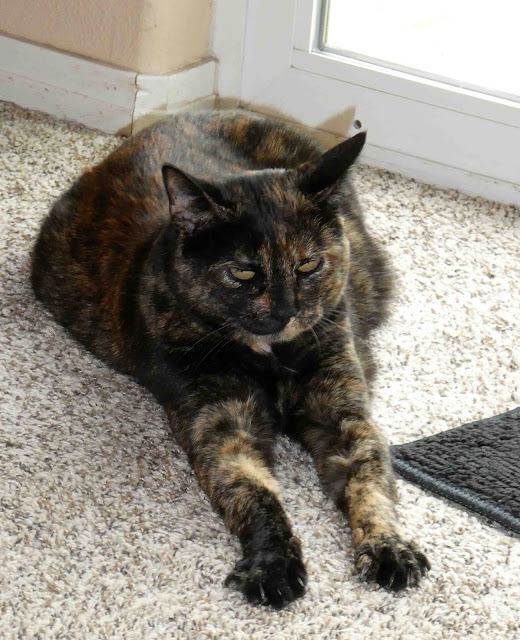 My life would be purrfect if only I could get outside and kill something. 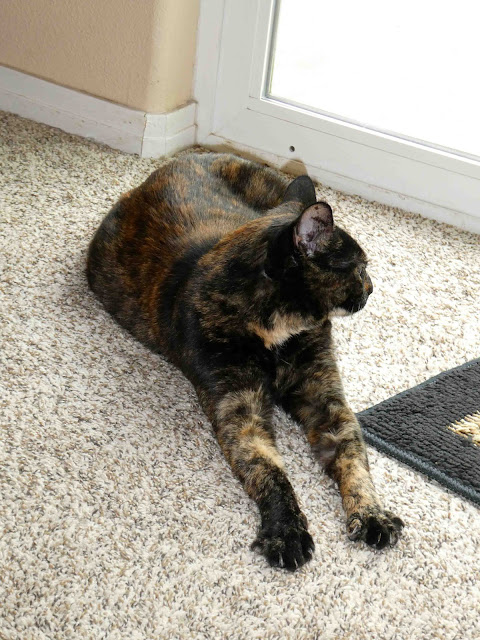 So, that's probably more than you wanted to know about my morning routine. I only bring it up because I've noticed that if any one of those things is done out of order, it throws off everything else, including the rest of the day. And yesterday's routine was off because I inserted the need to make another state park reservation before writing my blog post. I might as well have gone back to bed then because the rest of the day was completely off. By day's end, I couldn't even remember how I'd spent my time.

Well. I'm happy to report that I did get my state park reservation accomplished. Our Great Lakes trip is shaping up nicely, and we're spending many a night in a state park. I'm kind of excited about all the stuff we're going to see. But getting back to yesterday, and trying to remember what happened, I did accomplish my slow-stitching...more than usual. I wanted to finish off the sugar shaker, and then I was close to finishing the rest, so I did. 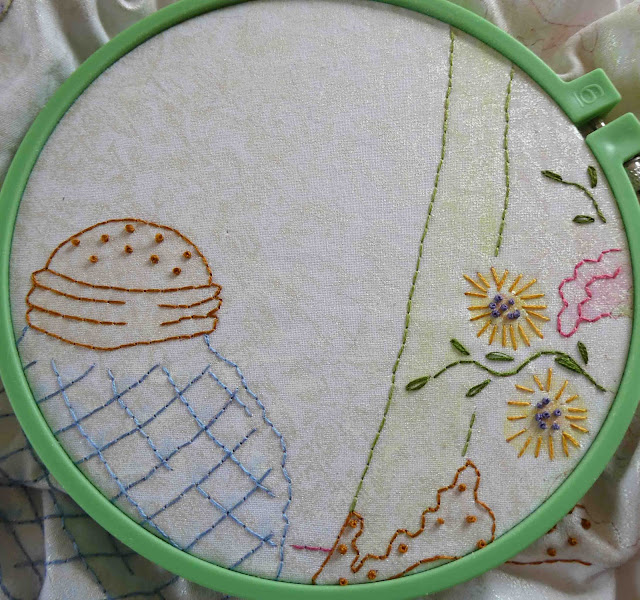 I did my little workout and then went outside to fill the bird feeders. While I was out, I checked on the blooming things. Right now, I'm watching the poppies and the peonies like a hawk. This peony is getting very, very close. I think it may open before the poppies. 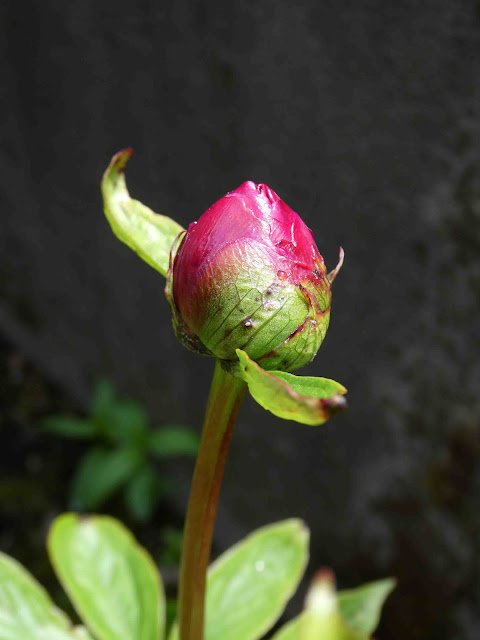 To its right, the stargazer lily is getting a bunch of flower buds now. I think this is going to be a stunner when it blooms this year. 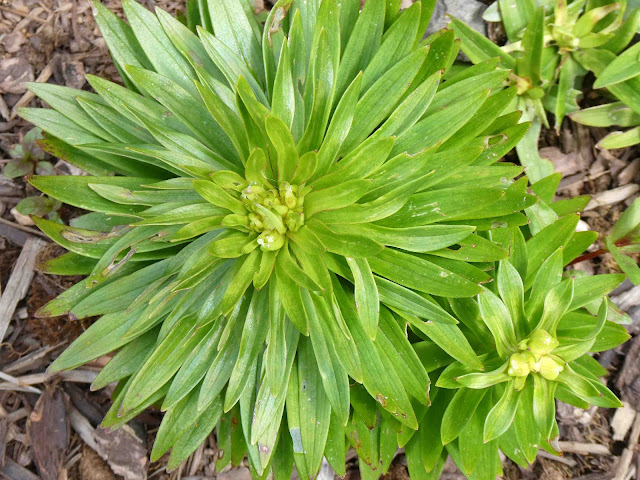 Walking on, I could see our sad little apple tree covered in flowers. They are so delicate and pretty. I'm curious to see how many apples we'll get this year. 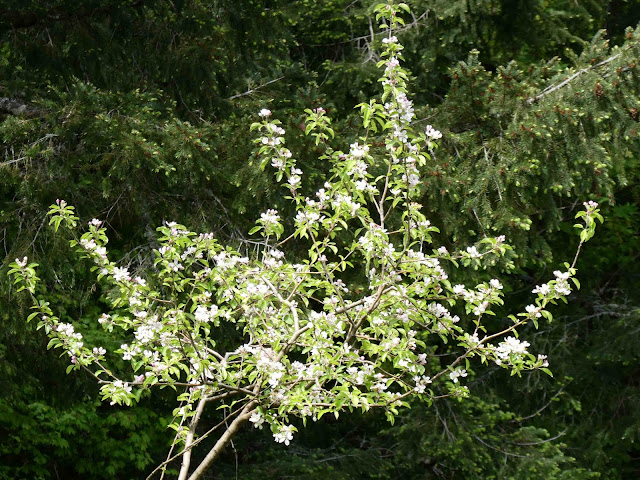 The tree has never done well, but it has begun producing apples the past couple of years, and I'm starting to think we shouldn't count it out. It might turn into a big apple tree eventually.
The fencing we put around our tomato cage seems to be doing its job protecting it from the squirrels. I'm checking it every day for tomatoes, but so far, there are only flowers. 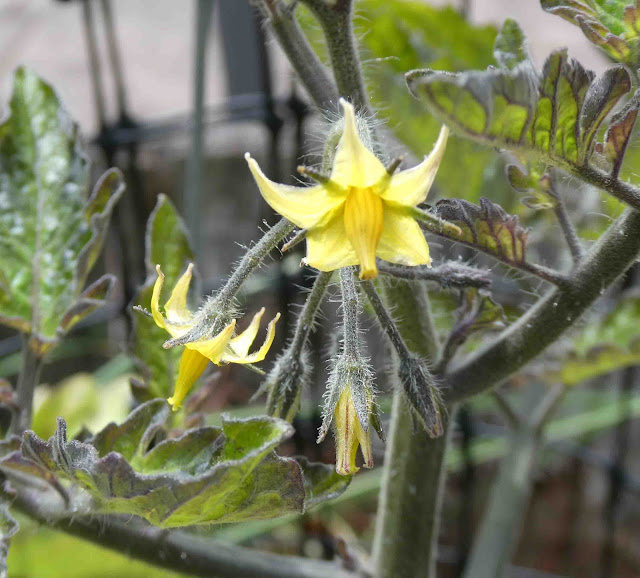 I wanted to give you a larger view of the lithodora. It has become a bright blue carpet of flowers. 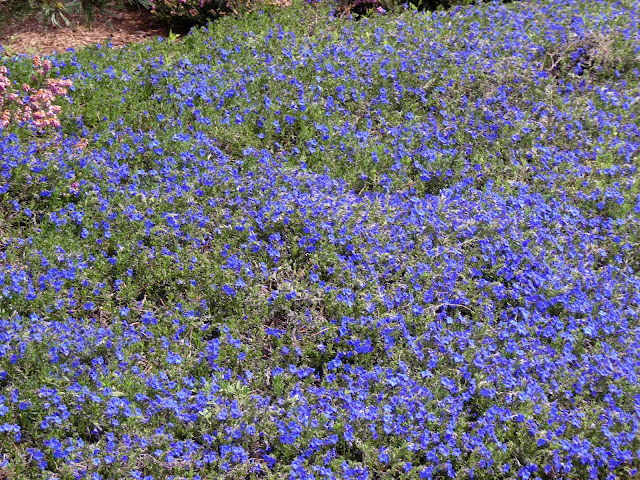 Walking on, the azaleas are amazing right now...so much color. It's hard to believe they can naturally bloom so brightly. 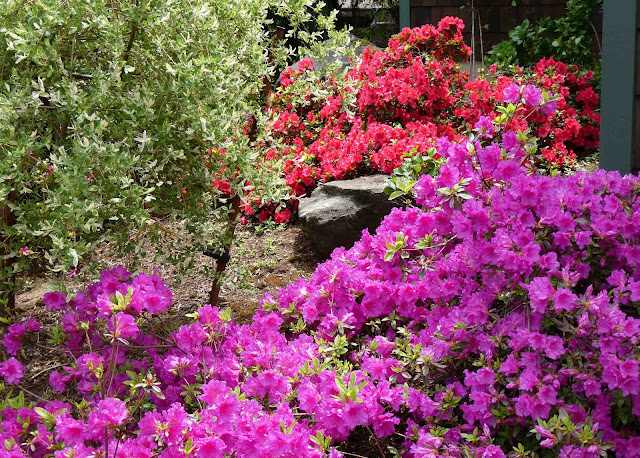 The flowers are beginning to open on the golden chain tree. This is another one I watch with great anticipation. 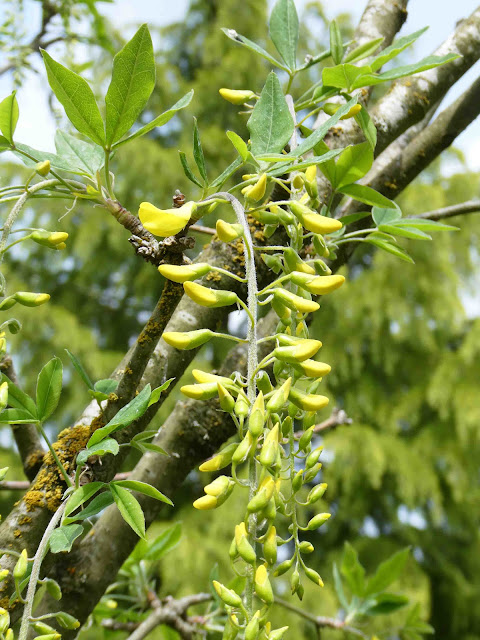 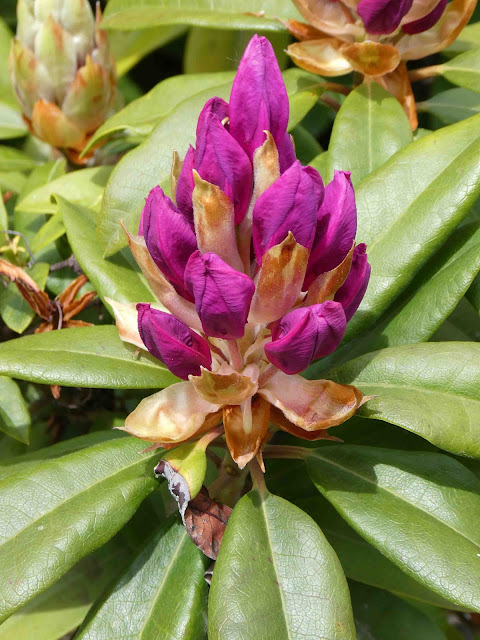 This is the azalea at the front door. It's planted under a tree and doesn't get as much sunlight. It's usually the last one to bloom. 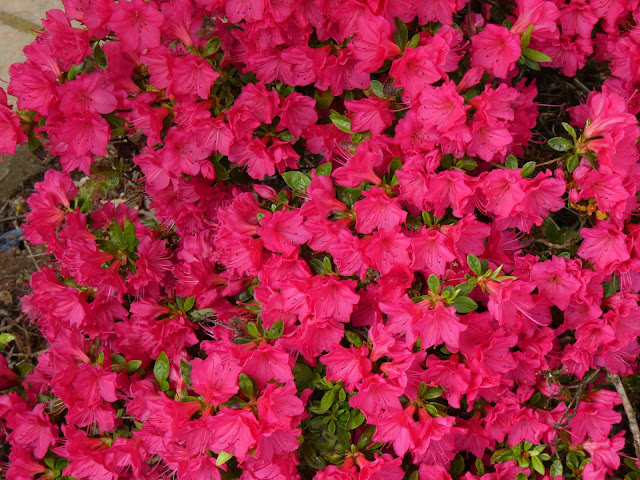 Turning around, I could see that one of the trees growing wild along the property line is blooming. This is on the garage side of the house, and I don't usually pay much attention to it. 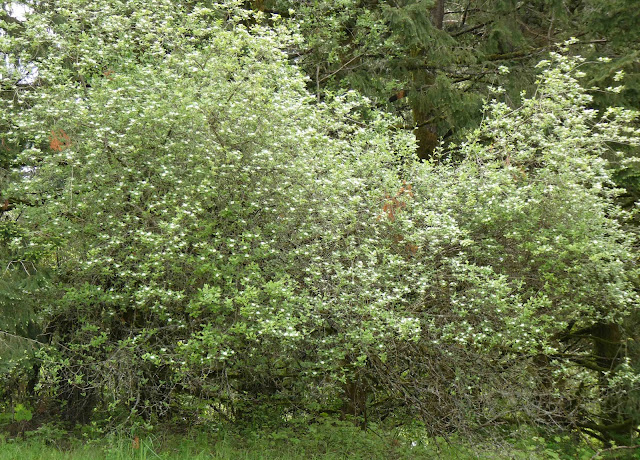 Yesterday, I walked up closer to get a better look at its flowers. I don't know what this is, but the flowers are very pretty and delicate. Each individual flower is about the size of a dime, and the cluster is about as big as a golf ball. Probably, it should get more respect than it does. 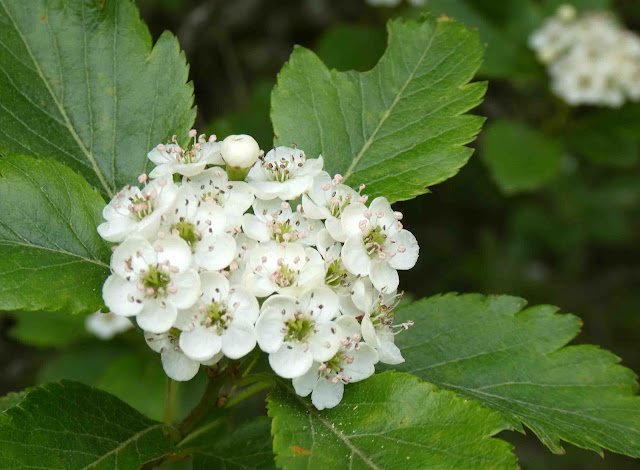 Behind the garage, the cherry trees have cherries! I worried about this because they were blooming when that heavy wet snow fell. I was afraid our cherry crop would be ruined. This is the Black Tartarian. There are cherries on the Bing as well. 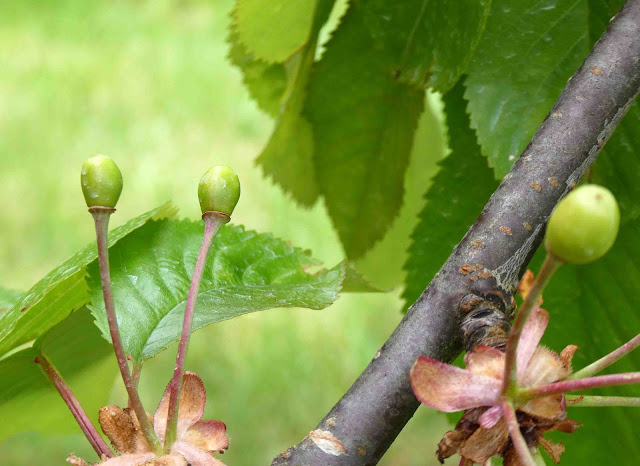 Closer to the garage, I noticed the blueberries are flowering. It's the first year for these, and so I'm not sure what to expect from them. They've had flower buds for weeks, but they don't seem to be making much progress. I don't really know what they will look like if they ever open. Also, their bed is next on the list for weeding, along with the peonies. 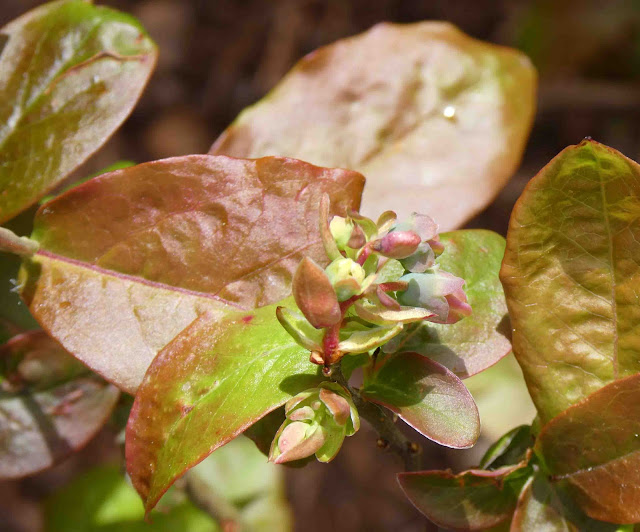 After that, I went back inside. It was after lunch time. Mike had to leave for a haircut appointment, and we were still waiting on the mold guys to come. It didn't seem like I could really do any sewing until they arrived. For one thing, I can't hear the doorbell when I'm in the sewing room, and I didn't want to miss them. So, I waited and scrolled on my iPad for a while, finally tipping back in the recliner for a short nap. My cat was there to help with the napping part.
The mold guys didn't show up until around 4:00 p.m. They promised us they wouldn't be more than about 40 minutes, which ended up stretching into two hours. They vacuumed all the surfaces, and checked moisture levels. There is still quite a bit of moisture in the wood within the walls, and so they set up a large industrial fan to draw moisture out of the room. It is venting through an open window and there is a filter to collect any remaining mold spores the might be floating around.
While they were working, Mike and I enjoyed the afternoon sunshine. We were enjoying all the bird activity. Hummingbirds were buzzing around our feeders. I snapped picture after picture trying to get something. They are so quick, it's hard to capture them in photographs. I did manage this one... 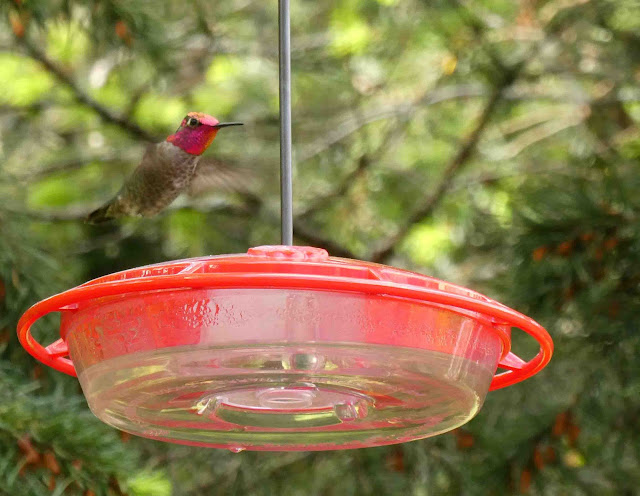 And we were thoroughly entertained by this black-headed grosbeak, singing his guts out at the top of one of our fir trees. It was some distance away, and so I was using digital zoom to get close enough. He had a very impressive repertoire of songs. 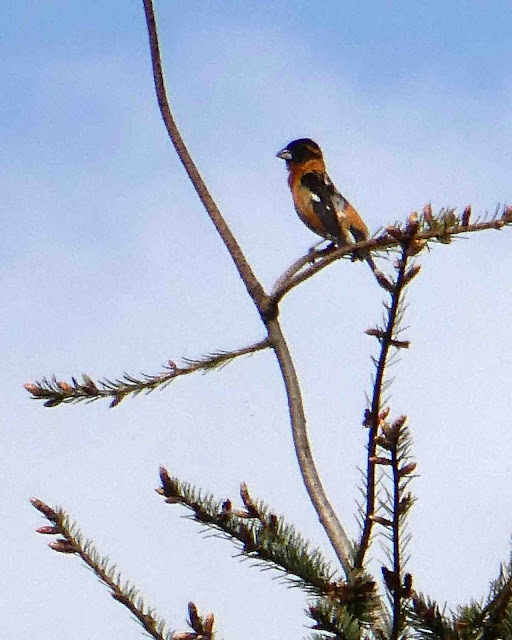 Okay, and so that was my day. I told Mike it was an "easy" day, and then I tried to explain what that meant. It meant that I was just doing whatever seemed right at the moment without feeling pressure to do anything else. The afternoon was at the mercy of the mold guys. Would they show up? How much were they going to do? How long would it take? It didn't seem like I could really do anything until these questions were answered, and there was something freeing about that.
So today the insurance guy is coming out. This will be the first actual thing the insurance company has done. So far, we've done everything...hiring different people to do different tasks without any help from the insurance company whatsoever. It leaves one wondering what our premium payments are for. In any case, someone is finally coming to look at it this morning, and the guy from the company doing the restoration will be here as well. We'll probably be negotiating how extensive the repairs will be...mainly, can we replace the carpet in the whole of the downstairs, and how much will the insurance cover? Things are looking up though. It's beginning to feel as if we'll get the downstairs put back together eventually. The wheels of progress turn slowly.

Before I go, here's a little housekeeping item. I don't know about other people, but recently I've had problems leaving comments on some people's blogs. The comment section prompts me to "Sign in with Google," only I'm already signed in. I've tried signing out and signing in again, and I've tried other solutions to no avail. Yesterday my friend Pat from Amity Quilter and I tried an experiment. She changed her comment setting to a "pop-up window," and that solved the problem at my end. I checked my own settings, and I already had my comments set for a pop-up window. You might want to check your own settings. It's pretty simple, and here's a screen shot:

Go to your settings, scroll down to "Comments." Right at the top, change your "comment location" to "Popup window," and that should solve the problem for the rest of us. Yeah, I know...Blogger. I happen to like the Blogger platform, but sometimes it can be frustrating. And who knows why or how this changed? Certainly not me.

Okay, so after we've met with the insurance guy, we need to head to the grocery store, and then the day will be my own again. There was no progress on my challenge quilt yesterday, but I'm hoping to get some done today.

You can count the seeds in an apple, but you can't count the apples in a seed. ~ Karen Jensen

I've been struggling with comments, too, but yours likes me today. Tomorrow might be another story! Your plants all look fabulous and I hope the pipe saga comes to an end soon. At least it sounds like you didn't have to rearrange the sewing room, so, you know, small victories.

Hi Barb, the pop-up comments seems to be much better. I have been having issues trying to leave comments on other sites as well.

I haven't had any trouble leaving comments on your page. Today, though it popped up one of those pictures you have to click on the square that contain a certain object. There are a few other sites that it wants me to log in using Google even though I am already logged in and nothing I do fixes that.

Thanks for all the lovely outdoor photos! Beautiful Spring!

I hate being knocked out of my routine, recovering from my fall has been very frustrating for this reason.
Your Lithidora is beautiful, and your lily is something yo look forward to.

I think the Google team would like blogs to completely disappear, as they frequently make changes which cause problems, without any notification. I've changed my comments to Pop Up. Thank you.

I don't think I've had problems commenting, but I'll keep that tip in mind, just in case. Your azaleas are gorgeous, along with all your other blooming things! Poor Sadie - dreaming of hunting! Glad things are moving along with the plumbing fix!

I always enjoy the stroll around your garden. Thank you for the tip re the commenting issues - I've linked to your post on my blog so it might help others.