The upcoming work replacing the carpet in the basement has me mightily distracted from my usual routine. Yesterday I ran virtually all over town and spent most of the day driving (or riding) from one place to another. I reported in yesterday's that I had five stops to make in town. Actually, there were six. I was home a little after lunch time. Later, Mike announced he was driving into town the other direction. It was getting too late in the day to start on anything, and so I decided to ride along. I'd say I didn't accomplish a single thing, but that wouldn't be true. I accomplished all those errands, but then I didn't do any sewing, nor any housekeeping. (As you might imagine, I'm terribly upset about the housekeeping.😜)

Smitty was 'zhausted with all this running around. 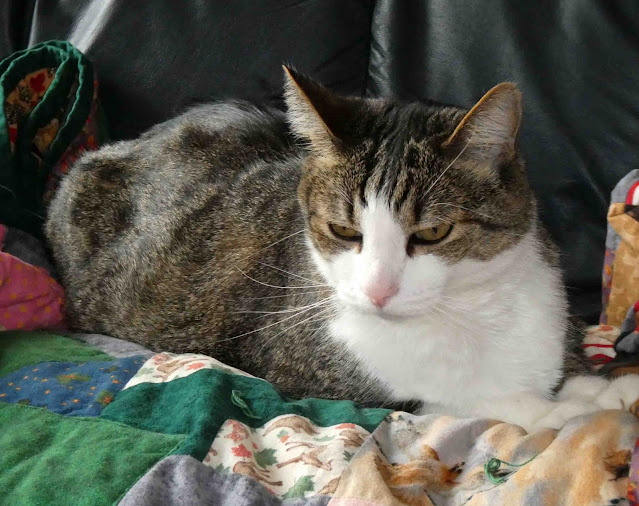 It was around 3:00 p.m. when we left home for the second time yesterday afternoon. With it being a Friday afternoon before a three-day weekend, the traffic was absolutely frightful. We passed by a high school just as it was letting out, and so this one-hour trip turned into something more along the lines of 2-1/2 hours. Fortunately, I had an easy dinner planned.
Many times, I've linked to a recipe for Hot Dungeness Crab Appetizer. It's a copycat recipe from a now-closed local restaurant known as the Hall Street Grill. The restaurant was in business for nearly 25 years when it closed suddenly (and rather mysteriously) overnight. Even vendors were notified by a sign on a locked door when they arrived to deliver bread and rolls. Employees learned they were now unemployed via the same sign. So that was weird. Just now I Googled it to see if any explanation had come up. Nope. We'll always wonder what happened. It was a very popular restaurant, one we counted on for a guaranteed good time when we wanted to celebrate a special occasion.
Okay, but getting back to the recipe, I usually make this as an appetizer dip, which is how the restaurant served it. You can serve it hot or cold, and eat it with crackers or slices of crusty bread. Either way, it is delicious. Here, you can see it served up as an appetizer in the square red dish near the middle of the image below. 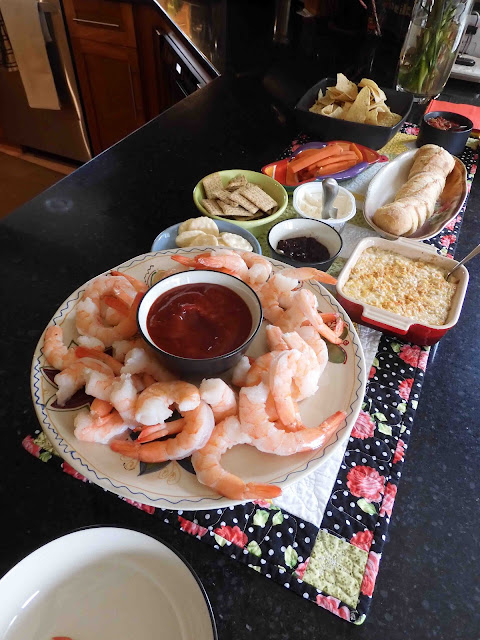 For last night's dinner, I spread it over English muffins, then toasted them in my toaster oven. A sprinkle of paprika pretties them up some. So we had open-faced crab sandwiches for last night's dinner along with a small side salad. After running around all day, it was nice to make something quick and easy. 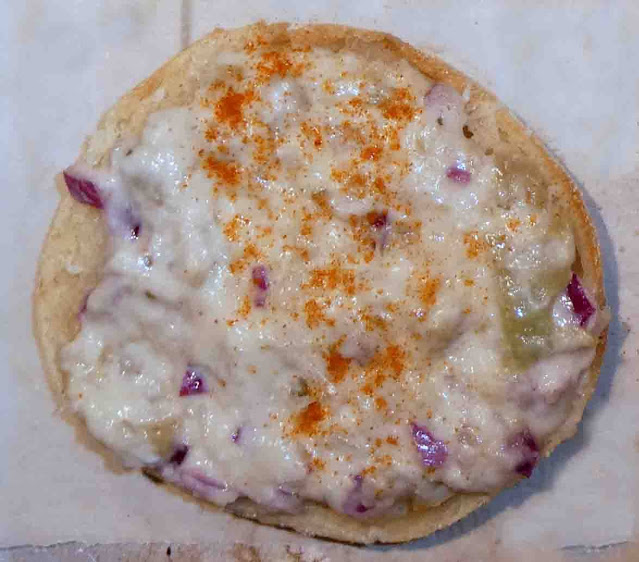 Oh yes, and that was one of my errands...getting a can of crab to use in the recipe.
And just so I'd have something to tell you in this post, I did my slow-stitching first this morning, finishing up most of the tablecloth edging and the bottom of the pitcher. 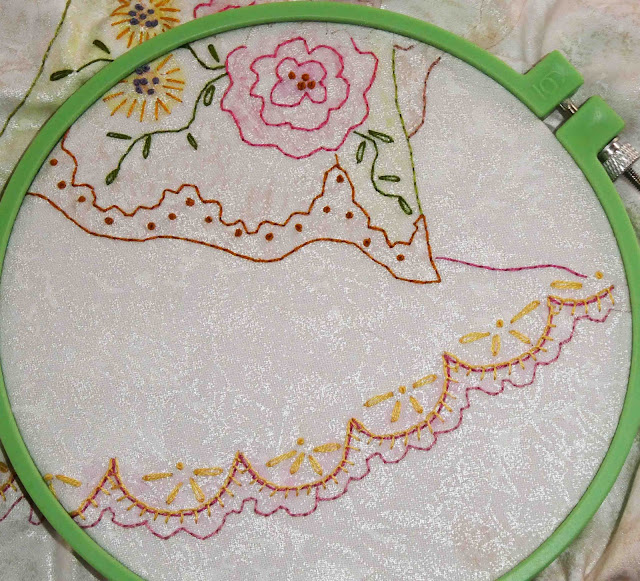 All that's left now is to finish the pitcher and then stitch the remainder of the "shelf" and "bracket" to the right. 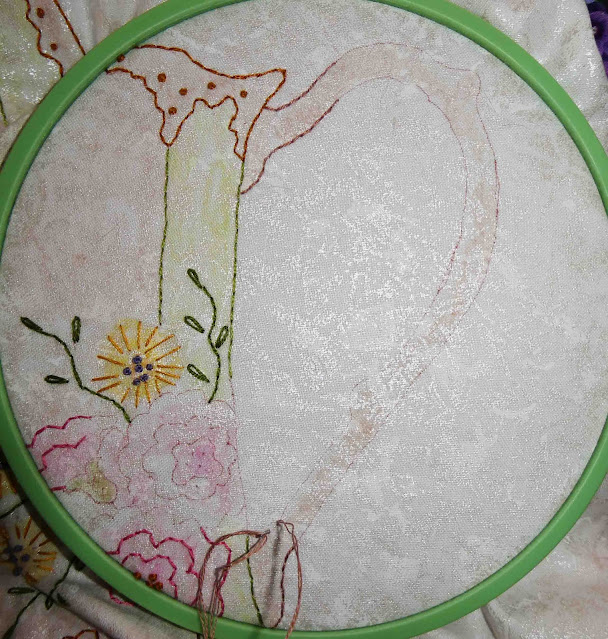 It'll be good to get this huge piece finished. I'm more than ready to work on something else. I took the first stitches on this back on April 27th, so I've been working on it for a full month. I thought it might be finished this week, but it looks like it will be next week now.
Today we're going to a wine tasting and food paring at one of the local wineries. Erik and Mae invited us to join them last week, and that will be a delight. This morning, Mike and I have committed to emptying one of the bookcases downstairs. It's shelves are loaded with DVD's that are never watched, and so those will probably go to the Goodwill...or maybe we'll save some to put in the RV for times when we can't get television any other way. I'm still hoping to get some sewing done today. The animal in the basement is getting restless waiting for the rest of his body.
Posted by Barbara at 8:47 AM

A good restaurant is like a vacation; it transports you, and it becomes a lot more than just about the food. ~ Philip Rosenthal

Just bookmarked that recipe. Yum. Sounds like the perfect dinner after a busy day!

The crab dip sounds amazing. Good luck with the continuing clean out. Once that new carpeting is in you’ll be happy.

Methinks you are deserving of a wine tasting as a break from clearing out and moving everything.