Happy Father's Day out there! We're celebrating here with Father's Day Eggs Benedict, Mike's favorite breakfast. Aside from being Father's Day, it's going to be a day to catch-up, and then hopefully, I can feel as if I'm back into a routine. We had a nice day yesterday. There was a lot to do during the day. I spent the morning hoeing weeds in the garden. We had so much rain for the two weeks prior, it was hard to find a day to get out and wallow in the mud without getting soaked to the skin. Yesterday was my day, and the weeds were having quite a party in among the vegetables. I hoed those suckers until not a single one was left standing. Sometimes you just have to bring in the big guns, you know?

I was tired when I finished with that, and so I sat under a tree for a while, cooling off, and enjoying a tasty refreshing beverage. Then, I grabbed up the camera and took a little walk around. I was most excited to see flowers on one of the pickling cucumbers. Upon closer inspection, I noticed an eensy-weensy cucumber. It's blurred in the image below, but you can see another one right behind it. 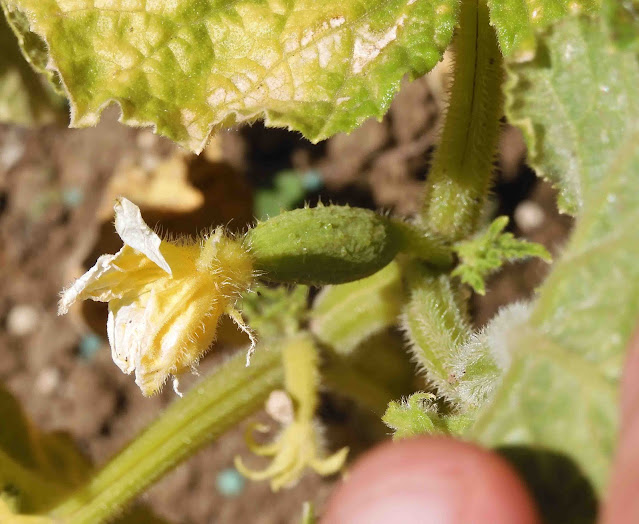 The garden has me feeling a little more optimistic now. We didn't get vegetables in the numbers we planted them, but we're going to get enough...and that's all I really care about. Last year's garden was so abundant that I stopped harvesting some things, and offered them up to neighbors for anyone who wanted to come and get it. (Perhaps I need to install a gong for later in the summer and put out the word that the gong means "Come and get it!!!")
The crop that's done the best in this year's garden is the sunflowers. I have about a dozen different varieties planted, and many are forming flowers now. It's always hard to wait for the flowers to appear. 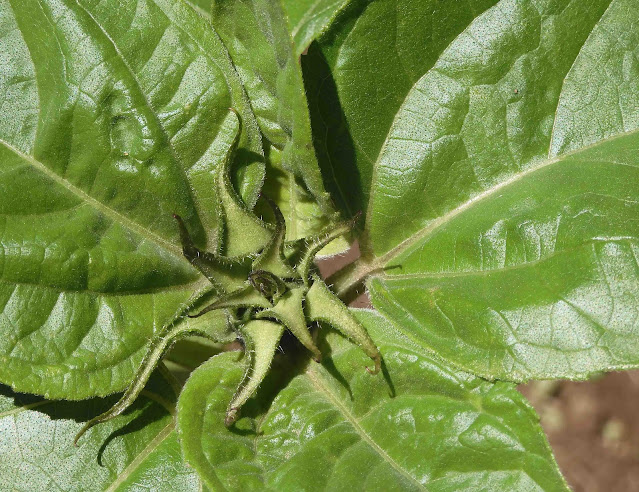 Walking around the rest of the yard, I found lots of plums and ripening cherries. Also, there are several dozen apples on our sad little apple tree. They are still small...about the size of an olive. We never get enough from this tree to do more than a dessert or two, but hey...dessert is the most important meal of the day. 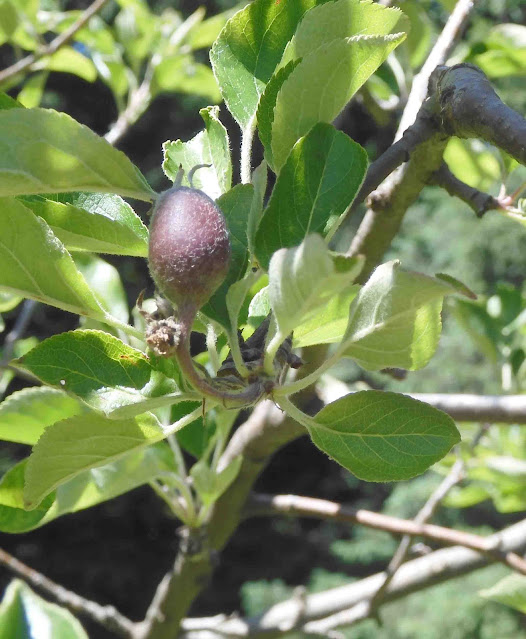 All of the hydrangeas are covered in flower buds. A few have bloomed. This blue one was first to show itself. 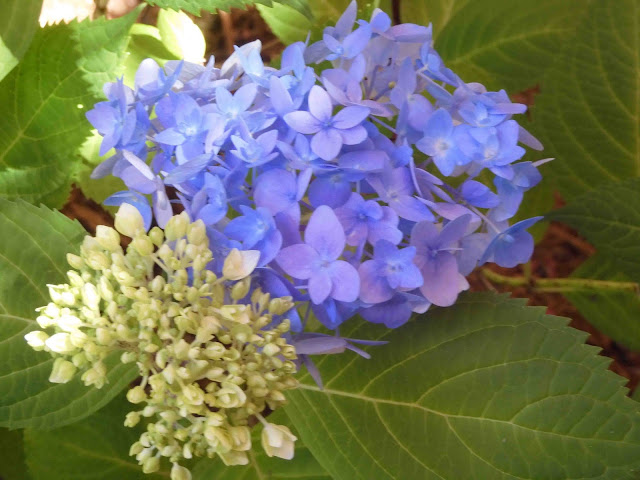 Yesterday, I noticed its pink neighbor had produced a flower. There will be lots more of these within the next week. 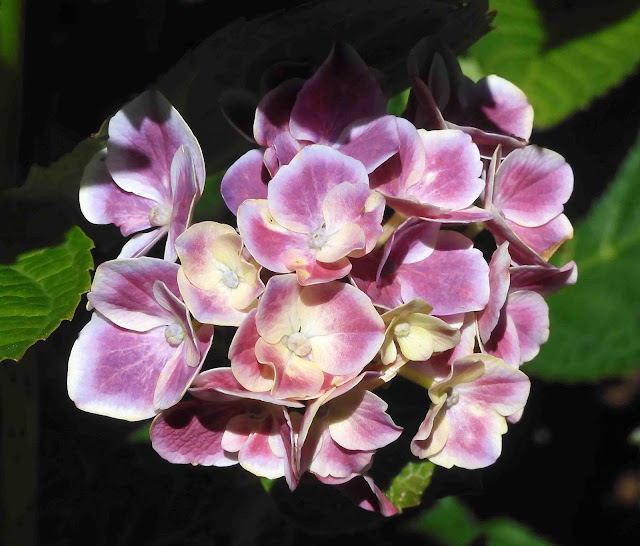 I'm expecting to see some echinacea soon too. One flower is beginning to color up. 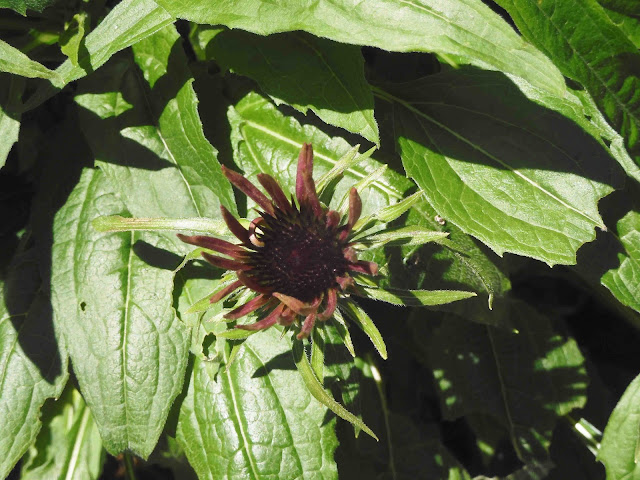 The first daylily has bloomed, and there are dozens of buds on these plants. They should be putting on a show very soon. 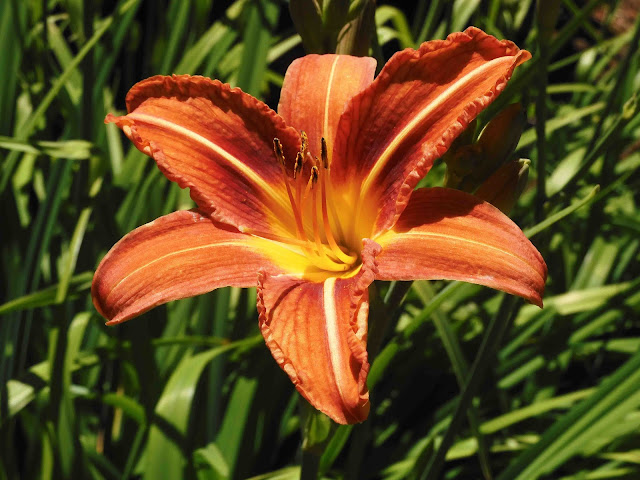 Fingers crossed the stargazer lily gets to bloom. It has lots of flowers, but often, some critter comes along and bites them off before they open. Critters...stay away!!! 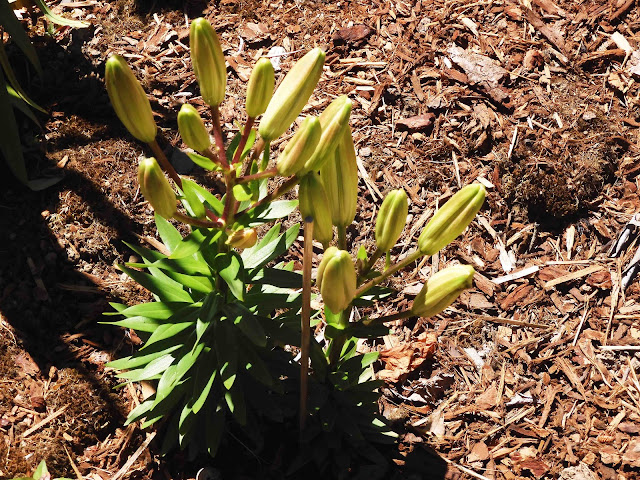 One of the calla lilies has put up a speckled leaf now. I believe this one might be a yellow one. It has a neighbor to its right that has yet to poke its head above ground. I hope we'll see it, but the cold winter may have killed it off. My recollection is that it likes to be last to the party, and make a grand entrance. There's still hope. 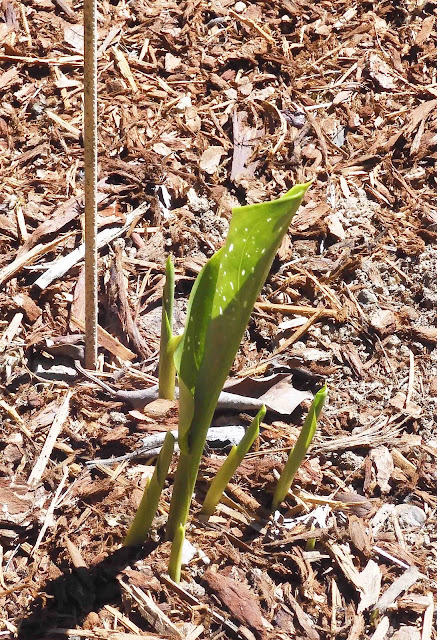 I was getting hungry for lunch by then, and so I headed back inside where I found Miss Sadie cooling her tummy furs on the top of the china cabinet. The sun was a little warm for little black cats yesterday. 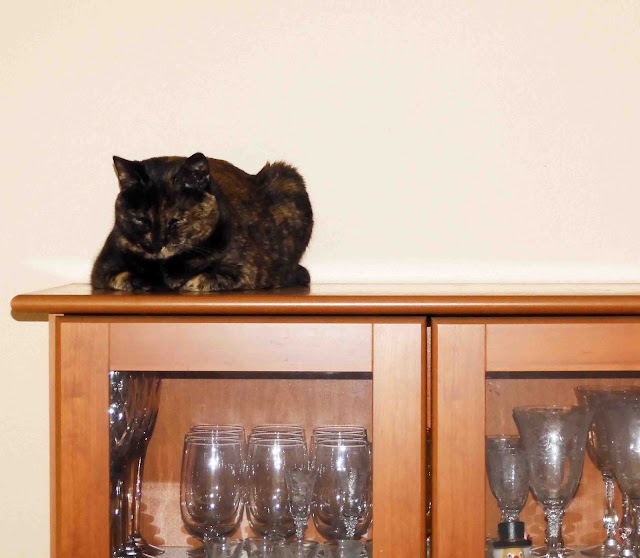 She looks like she's settling in for a nap, doesn't she? 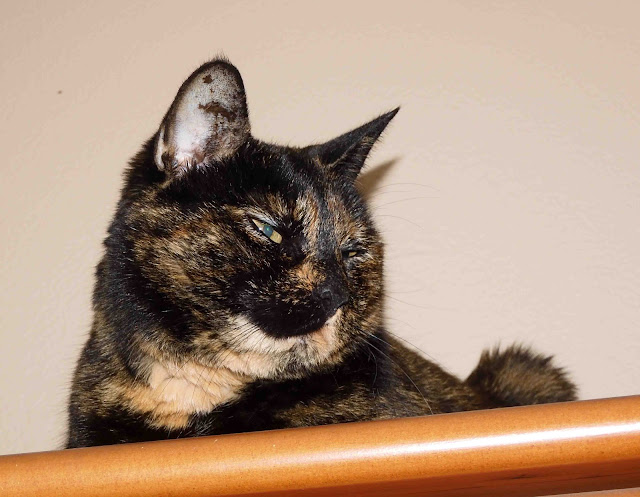 As I mentioned in yesterday's post, we were invited to Erik and Mae's house for barbecue last night. Their garden is looking great. Our elevation is higher, and so we're behind where they are with their plants. It's difficult to see in this image, but they tried the method of growing green beans around the bottoms of their corn so that the green beans are climbing the corn stalks. 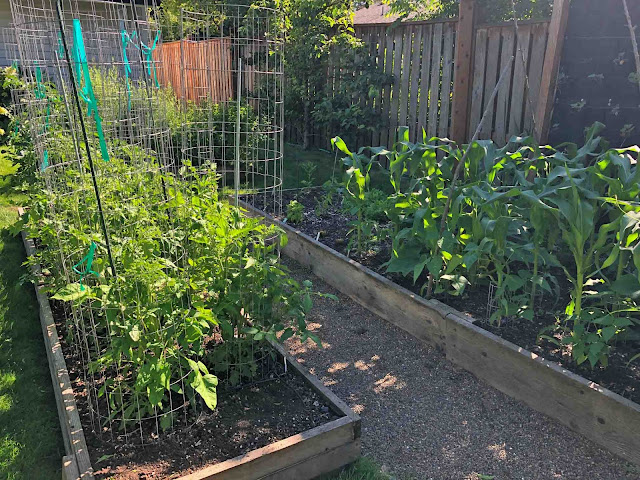 We had a nice evening and the most delicious smoked brisket I've ever eaten. Erik was up at 3:00 a.m. yesterday morning to get it started in his smoker. He first slathered it in mustard and then added salt and pepper. That was all the seasoning, and then it was roasted and smoked for many hours. When it reached its final temperature, he wrapped it in butcher paper, and then let it rest in an insulated container to keep it warm. When he brought it out for carving, it looked like this: 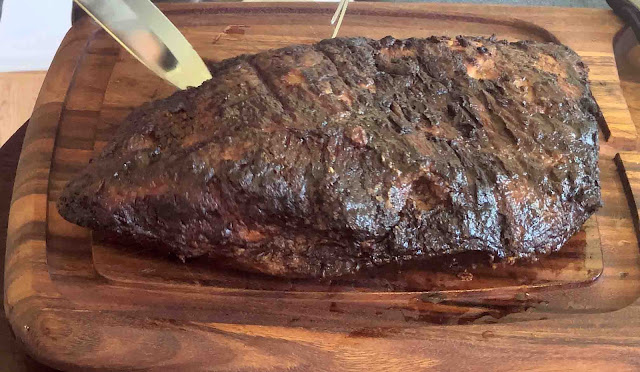 There were eight of us for dinner, and everyone contributed something. I brought a Dill Potato Salad. Mae made a green salad from lettuce in their garden, and she made a corn salad using fresh corn and some other goodies. Matthew and Lyndsay brought the makings for a rhubarb pie and baked it while we ate dinner. All and all, it was a great dinner and a nice chance to get together with family and some of Erik's friends.
Earlier in the day, I decanted the sage blossom vinegar that was started a few weeks ago. It always looks so pretty when it's newly bottled. Interestingly, the color fades after a time, even if it's kept in a dark environment. It does retain its flavor, however.

The only sewing I did yesterday was to finish up the latest section on Calendula Patterdrip's Cottage. If you're wondering, those are eyes of newt. 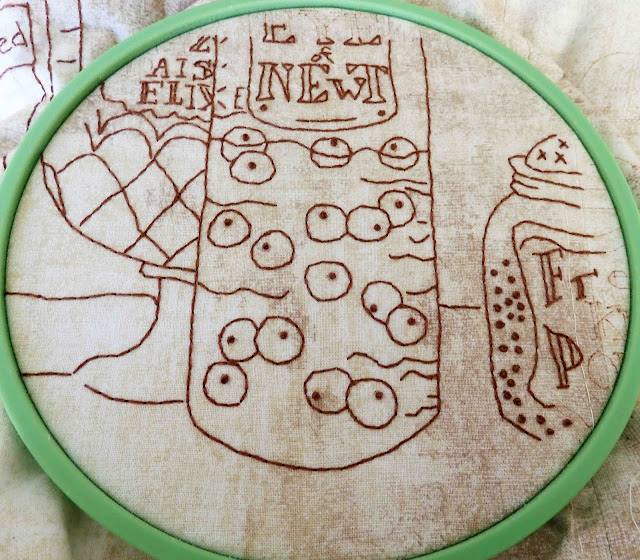 And, surprisingly, I've already stitched to the seam line between blocks 3 and 4. I have some more to do above, but Block 3 is close to being finished. 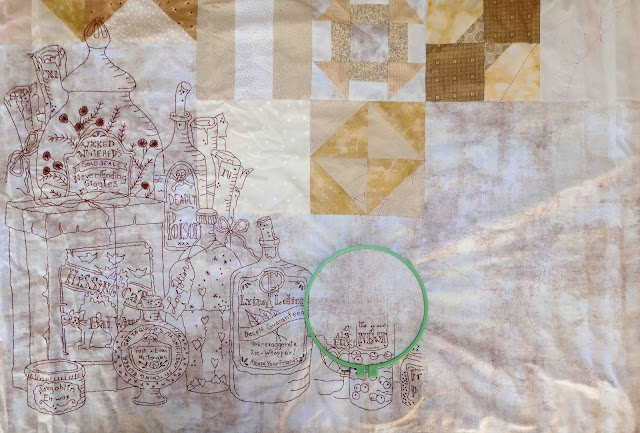 And so that brings me to the "taking stock" portion of this post. I need to water the flower pots and do some weeding this morning. Oh yes, and first...eggs benedict for the father of my children. After that, I need to finish unpacking the camper from our last trip. I've been bringing things in piecemeal, but there is still some stuff to bring inside and put away. After that, I can finally get back to my sewing. I've been threatening to start on this Sonora Desert piece, but I've taken it no farther than the picture I showed you last week. 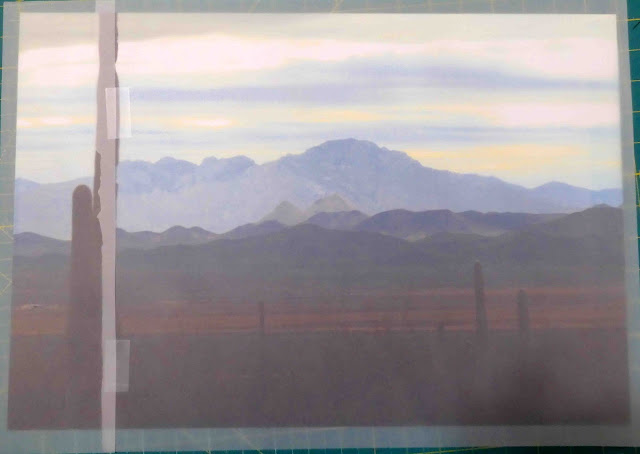 But now, I've kind of decided to make a baby quilt for the new baby of one of Matthew's friends. It shouldn't take too long. I'm still deciding on a pattern, but it will be something quick. More about that in tomorrow's post. For now, it's time to get going on that breakfast. I hope you all have a Happy Father's Day where you're living.
Posted by Barbara at 7:48 AM

A father carries pictures where his money used to be. ~ Steve Martin

I must get myself some hydrangeas... I just love them!
You are making fantastic progress on the cottage project... eyes of newt LOLOL! So fun! I love seeing it!

What a blissful post. Happy Father's Day to Mike. I'm sure he is going to enjoy the Father's Day Eggs Benedict you are going to make for him. Nice way to start the day. I hope you also find time to stitch (or sew).

You have been busy! Your garden looks lovely. My hydrangeas I have been cutting and bringing inside. If I leave them out in the 106-107 degree weather we have been having, they get crispy fast. Hope you have a great week!

The flowers in your garden looks great. I really like your embroidery.

Lulled by the lack of evidence of deer damage, I have not been diligent about spraying the deer repellent. Hence a sudden discovery that lots of day lily buds have been devoured and the Starfire phlox is nothing but stalks. And the first chipmunk made his presence known two days ago. I know he's been here longer since the dahlia tubers I potted up and put on the deck have been nibbled. Sounds like you had a wonderful pre-Father's Day dinner with the family.
Pat

Happy fathers day to Mike! Your trip photos of the Palouse area reminded me of our last trip to Oregon in 2015 when we drove through that part of Washington. Good memories, need to revisit the many photos we took. Your garden is doing far better than ours this year. It must be one of those lean years, which since canning lids are scarce as hens teeth, may just work out.

One 1/2 of my front garden/yard is nothing but Japanese Maples and hydrangeas, which are over 6' tall and just starting to show their colors. Need I tell you how tall the maples are ??

Your plants are looking great. The Blue Hydrangea is gorgeous. I've never heard of planting beans by the corn like that - clever! On my goodness - that brisket looks really good!