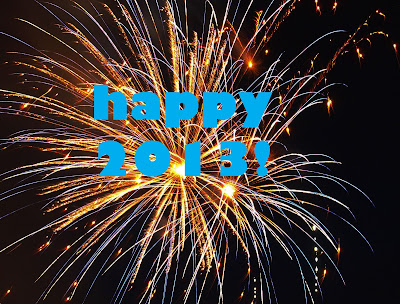 Happy New Year, everybody!  I hope 2013 brings you nothing but good things!

We're starting the year off with a bang.  The family is coming up for some good food, good football, and lots of fun.  (We always have fun when we get together, so that last part is a given.) 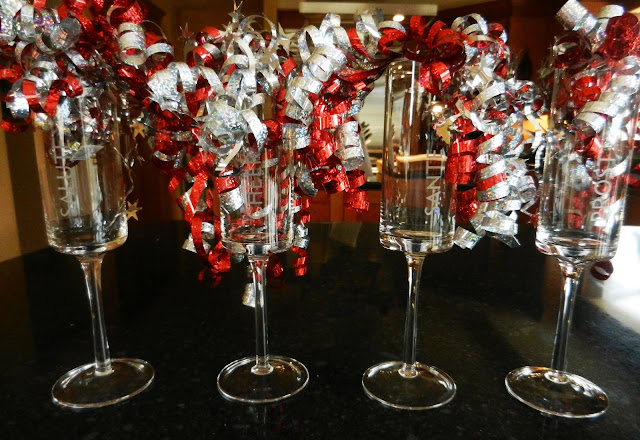 I thought you might enjoy seeing my quick and dirty table decoration.  I can't take credit for it.  It was seen as a store display, and I thought it was cute.  It's just some inexpensive champagne flutes and some of those curly ribbon stick-on bows.  Festive, huh?  Only the best for my family.  This will be an informal dinner though.  Things are just going to be served up on our breakfast bar, and everybody can help themselves.

On the menu today: 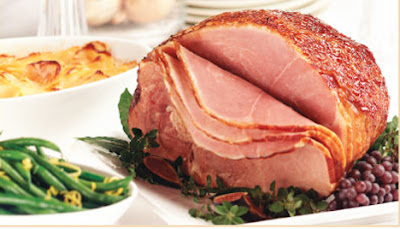 Yeah, that's not my ham, but you get the idea.  So simple.  You just buy it at the grocery store with your $10 off coupon.  Bring it home.  Put it in the refrigerator.  On the big day, take it out of the refrigerator.  Put it in a warm oven until it's warmed the way you like it.  (It's advisable to take it out of the cardboard box first.)  Serve.  A simple recipe, to say the least.
~~~

Also, Ina Garten's Maple Baked Beans (click on the link for the recipe). 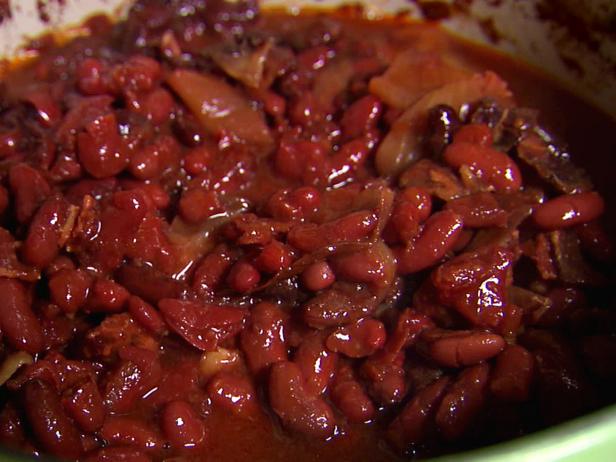 Yeah, those aren't my beans either.  This is the image from Ina Garten's recipe.  One of my New Year's Resolutions is to steal more images off the internet.  Not really.  I've made these beans before.  They take quite a bit of time, including soaking the beans for 24 hours ahead of time, then simmering them for 50 minutes on the stove top, then baking them low and slow for 6-8 hours.  But, man, if you can think ahead enough to get the timing right, baked beans have never tasted so good.  Yum.  My stomach is growling just thinking about them.
~~~
Let's see.  What else?

Oh yes, my mother's Seven Layer Salad.  It's one of the lasting legacies of my dear mother, gone now for nearly 16 years.  She was such a dear person, and I still miss her.  She was the one who introduced me to this recipe after attending a family reunion, and it's been a family favorite for at least three generations.  There are a lot of different versions of this recipe, but here's the way my mom did it. 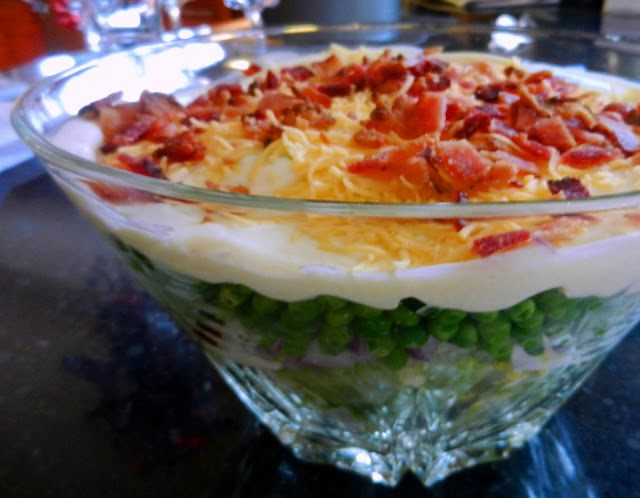 Layer first six ingredients (lettuce through green pepper) in a large
salad bowl.  Add sugar to mayonnaise and frost and seal entire top of
dish.  Top with grated cheese and crumbled bacon.  Cover and refrigerate
for 8-12 hours or overnight.

But that's not all.  Also on the menu is my favorite potato salad recipe of all time:  Dill Potato Salad. 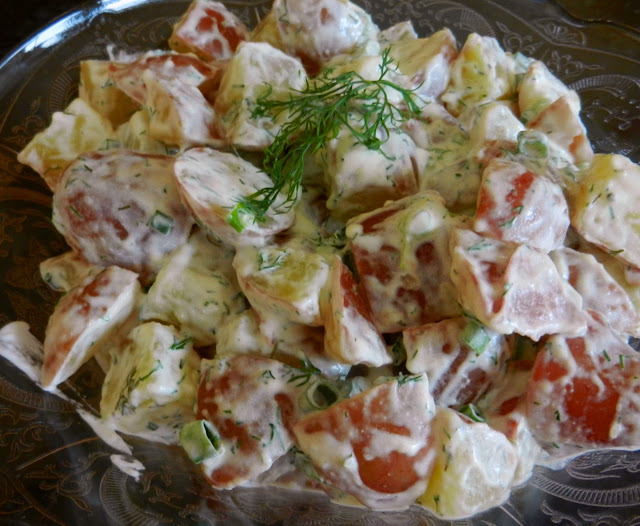 It's a recipe first published in the June/July 2011 issue of Cook's Country, and if you are a fresh dill lover like I am, then you will love this potato salad.

Combine vinegar and 1 tablespoon minced dill in bowl and microwave until
steaming, 30-60 seconds.  Set at room temperature until cool, 15-20
minutes.

Whisk mayonnaise, sour cream, remaining dill vinegar, mustard, 1/2
teaspoon salt and 1/4 teaspoon pepper together until smooth.  Add dressing
to cooled potatoes.  Stir in scallions and remaining 2 tablespoons minced
dill.  Cover and refrigerate to let flavors meld, about 30 minutes.
Season with salt and pepper to taste.  Serve.  (Salad can be refrigerated
for up to 2 days.)

My notes about the recipe:  I wrapped the chopped dill leaves and stems in cheesecloth and then placed the sachet inside a tea infuser.  Also, I use red potatoes and I leave the skins on.  I like the way the green dill looks with the red potato skins.  Yukon Gold works just as well, and Yukon Gold is noted for holding its shape a little better after they've been boiled.

And you can't have a New Year's Feast without dessert can you?  (See above references to starting your diet tomorrow tomorrow tomorrow tomorrow.  Just imagine you're saying it while standing in a canyon.)  We're having Mike's favorite cheesecake:  Bailey's Chocolate Chip Cheesecake. 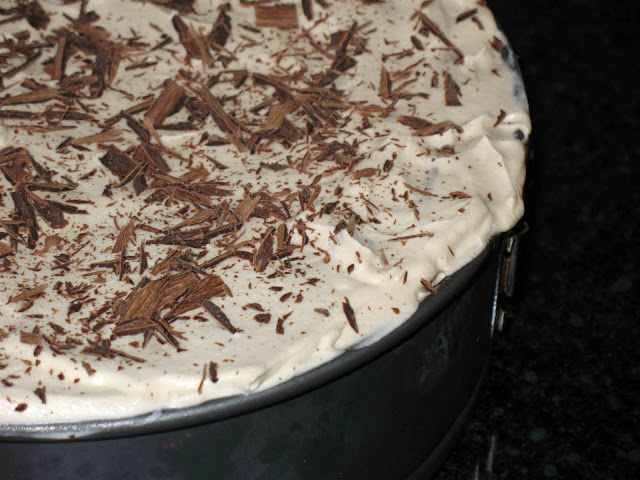 I blogged about this when I made it last year.  You can see my post with the recipe right here.  This recipe was published in Bon Appetit in 1989.  I was just a babe in arms then (if by babe in arms, you mean a woman married 14 years with two children).

What I didn't tell you in the recipe I posted last year is that there is a non-alcoholic substitution for the Bailey's Irish Cream. If you've avoiding alcohol, you can substitute non-alcoholic Baileys Coffee Creamer, which is available in different flavors.

It's perfect for coffee, desserts, and even "virgin" variations of some cocktails. The chocolate variety tastes slightly like the liqueur, without the subtle hint of whiskey.

So that's it for me for the day.  I'm off to enjoy it.  But before I go, here's what's happening outside my window as I'm writing this. 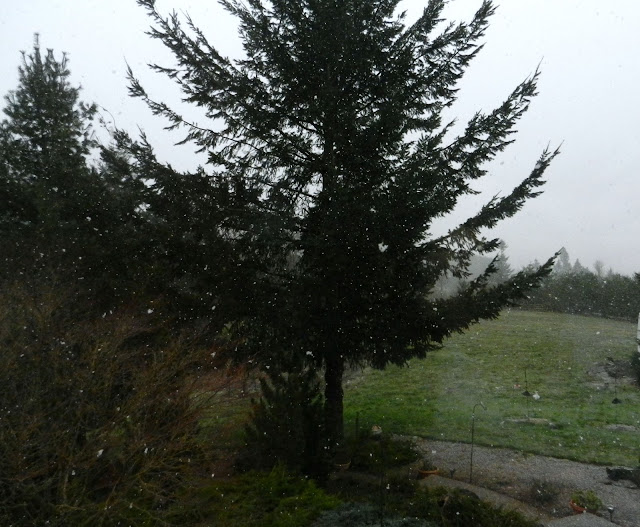 Do you see those white flecks in this image?  That ain't no digital noise.  It's snow.  So much for our week of sunshine.  Oh yes, and do you see the mountains in the background?  No.  Neither do I.  But that's Oregon for you.  Happy New Year!
Posted by Barbara at 11:43 PM

Happy New Year to you and yours. Thanks for sharing your life and quilting with us.

Happy New Year to you and your family Barbara. Thanks for sharing your travels, quilting cat stories and calamities. I'm looking forward to more fun and quilting in 2013.

Happy New Year to you, my darling friend, Barbara! We went to bed early...Todd had to get up and go to work this morning, so we went and drove through the Galaxy of Lights, grabbed Peppermint Shakes from Sonic and were in bed by 10:30! LOL! Today I'll put on the traditional Split Pea Soup in the crock pot. Your layered salad looks great...Todd doesn't like it so the only time I get it is at get-togethers where someone else brings it! :)

Happy New Year to you my friend, I'm glad you had your family all together, I'll have that today at the zoo.

Thank you for the yummy post and a Blessed New Year to you, also!! Hugs, D

Happy New Year, Barbara. It's 7:35 a.m. and the turkeys are right on time. It's 10 below and the sun is coming up. It will be a beautiful New Year's day. Enjoy.

Happy New Year!This posting has me craving your 7 layer salad...is 9:00am too early for salad? :) I will be making this soon, thanks for sharing the recipe!
sowingstitches[at]gmail[dot]com

It all looks delicious, Happy New Year, whether it's fog, snow or rain!

Snow, snow everywhere. We have it too. My granddaughter, Taylor, was making snow angels and trying to eat the flakes. Happy New Year, the table looks great and I'm sure the dinner was fantastic.

If you're interested, Taylor's photo is here, scroll down to her trying to catch the flakes in her mouth! Funny girl.

We're going to be wild and crazy today, My Guy is making pizza.

Enjoy your day with your family. Happy 2013!

Love the decorations -- I'll have to remember that for next year. My menu was not as elaborate, everything looks delicious!

Happy New Year to you!!! Thanks for sharing the recipes, Barbara. I *love* dill potato salad and can't wait to try this one out.

WOW! That was a lot of cooking! Me, I just made a pot of vegetable beef soup!

OK, the food looks AMAZING and I love snow and I watch football...So I will be there shortly!

Happy New Year Barbara!
Thanks for all the laughs, sighs, drools & quilts over the past year.

Happy 2013, Barbara, Mike and family and Cats. I love your blog and look forward t more interesting fun this coming year. Thanks.

Happy New year, dear friend, your family, and your furbabies! Wishing all the best for you and yours! Hugs!
(I remain firmly convinced of your ability to do absolutely anything. I mean, after all, you have the pictures to prove it. LOL)

Happy New Year Barbara! I wish great blessings and happiness for you and your loved ones in 2013!!!

Happy New Year, Barbara! With sleet & snow on New Year's Eve, I opted to stay put and watched some of my favorite movies until midnight. I had a crock pot of corn chowder as a treat and will share the leftovers with my daughter tomorrow at lunch.

No quilting for a couple of days here--I'll have my 7-month-old grandson. He's taken off crawling since I saw him on Christmas, so it should be an interesting couple of days! Back to my projects and taking advantage of a couple more end-of-year sales going through the weekend on Friday.

Happy New Year. Your cow block is absolutely Moovalous. I love all your recipes too! Thank you for all the #CreativeGoodness, yummy recipes and fun!