A Drive in the Country

As expected, I was able to finish up the sixth plate for Pieces of the Past yesterday. 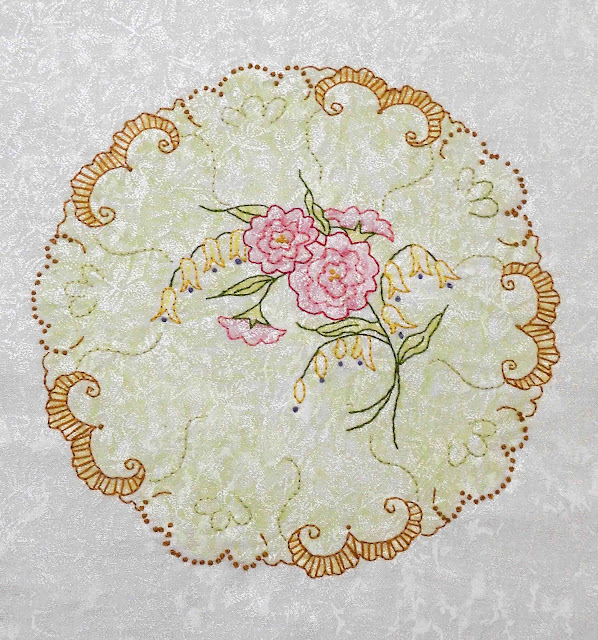 There are nine plates altogether. Here are the six I have so far. 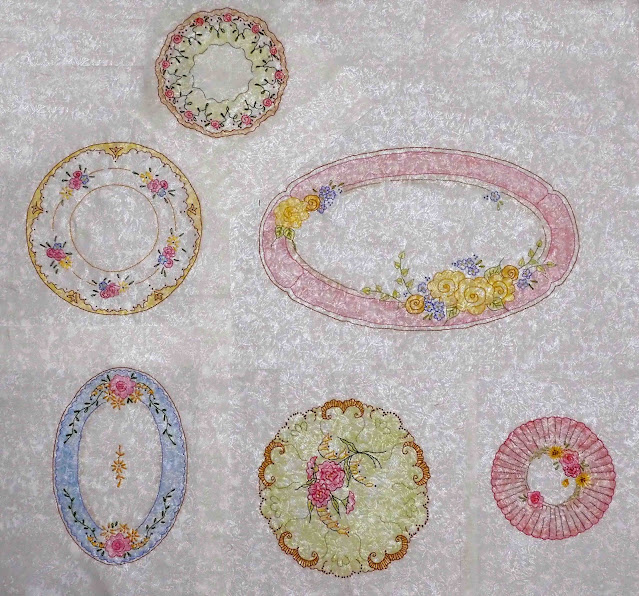 And that meant I needed to trace out my next project. This will be the "short" project on my list. This pattern for "An Irish Blessing" is from Yvonne McKee of Belfast, Northern Ireland. I purchased it when I attended the International Quilt Festival in Galway, Ireland, back in 2012. I looked to link to the pattern, but I could find nothing about it. Yvonne McKee owned a quilt shop in Belfast at one time, but the shop has closed. 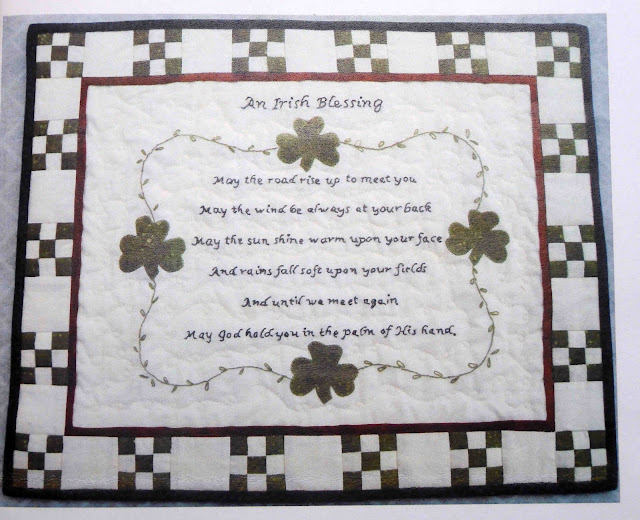 There was a white tone-on-tone shamrock fabric in my stash from another project, and I traced it onto that. I'll get started on the stitching this morning. I decided to do the appliqued shamrocks after I finish the embroidery. 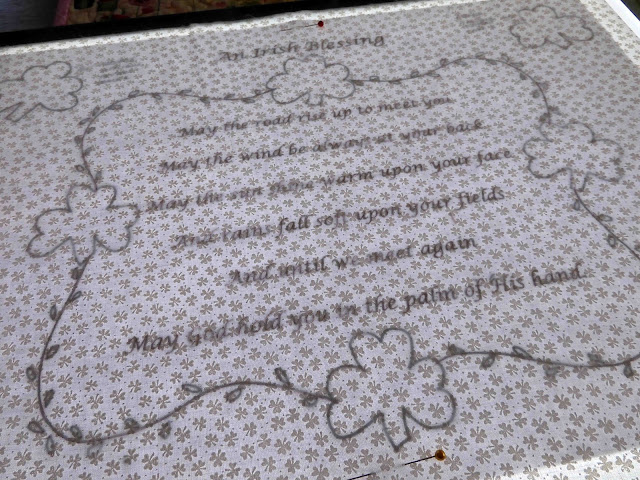 It was time to head out to pick up one of our wine shipments. The second shipment is at a winery closer to Salem, and they were closed yesterday. We'll have to take another drive next week for that one. No problem though. It was such a beautiful day yesterday...a nice day for a drive in the country. Mt. Hood accompanied us as we went. 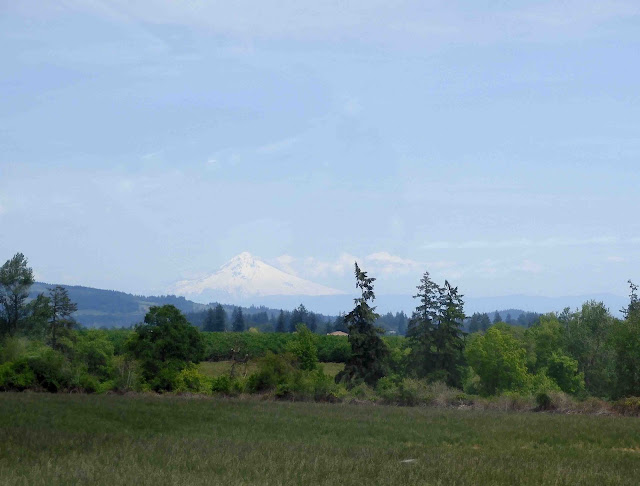 Poppies are blooming everywhere. This next image shows a field at the bottom of our hill. 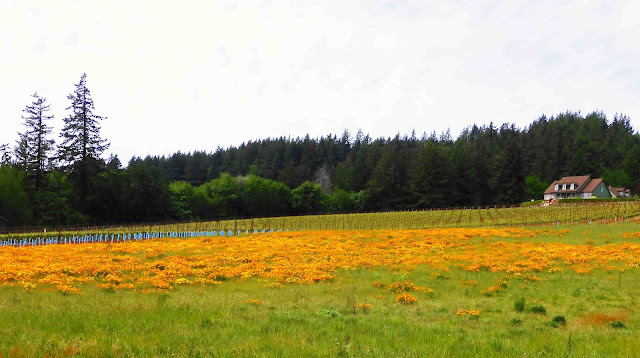 This next image was taken as we turned into the driveway at the winery. 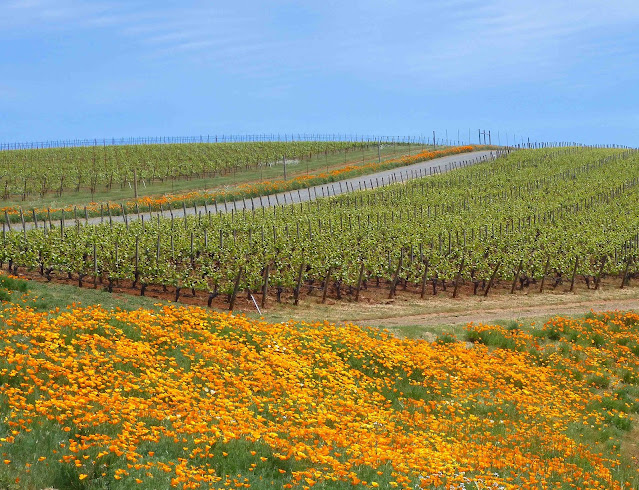 We picked up our wine, and then went out for lunch. I had a strong yen for a Reuben. I usually deprive myself of that particular sandwich since the dressing is pretty high in calories. Yesterday...no dice. I had me my Reuben with no apologies. It was delicious with a side of sweet potato fries.
When we got back home again, I was able to finish up the applique on the latest block for New Mexico Kitchen. There were some errors in this pattern. Some of the applique templates were missing altogether. Some were not reversed. It's fine though. I got 'er done. 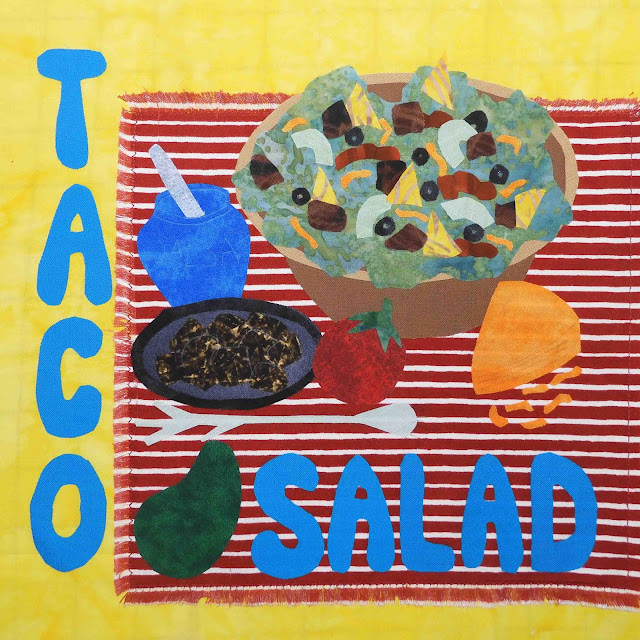 It was time to stop then, but I had just 20 minutes left on my audio book, and so I listened to the end while I started the top-stitching. When the book ended, so did my stitching, and I left it right here for today's effort. 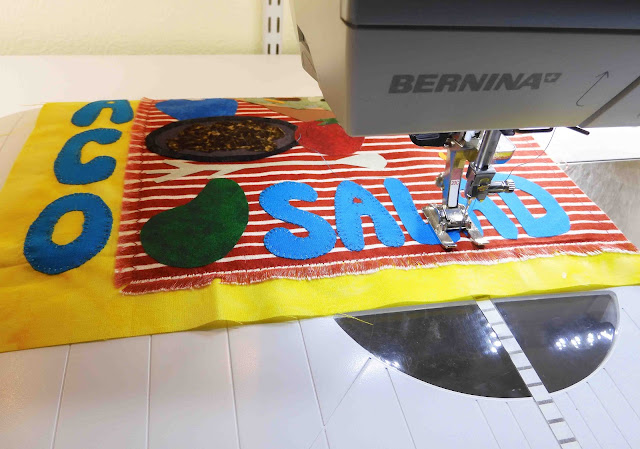 This will take a while since there is a lot of detail to be stitched in. I believe I can do most of it by machine, but there will be a little hand-stitching too.
Just before dinner, I got outside and took a little walk around. Mike has been hard at work spreading bark dust all around the yard. It's the first time in many years he's done this, and everything is looking really nice. He also planted the last two chive plants (from Erik and Mae) in the culinary herb garden. Maybe next year I'll have enough chives for chive blossom vinegar. 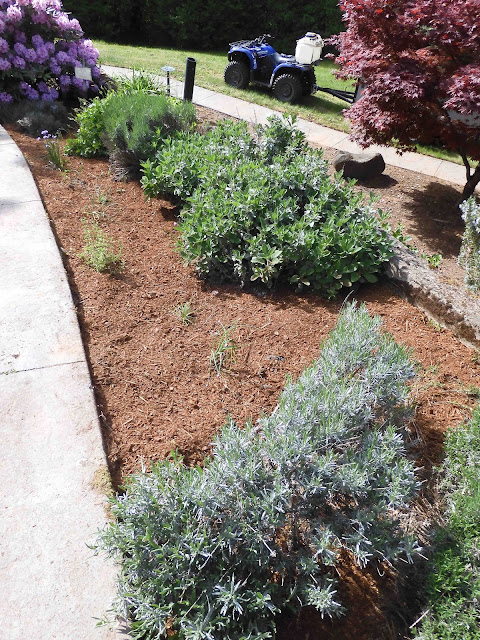 The azaleas are amazing right now. Mike added those stepping stones so I can get to the hummingbird feeder without stepping in the mud during our rainy season...which is long. 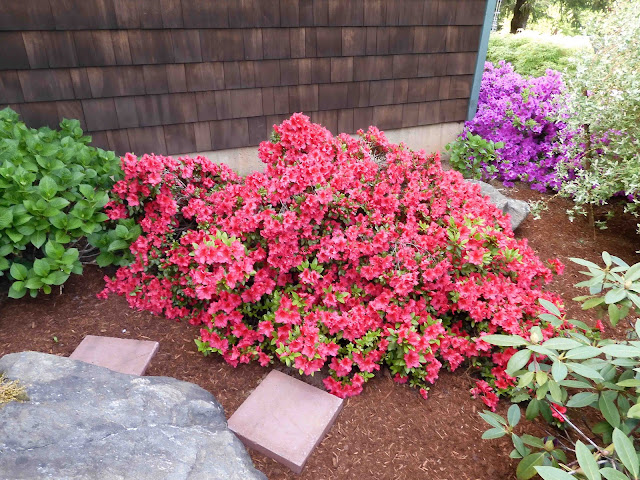 Here's another of the azaleas. 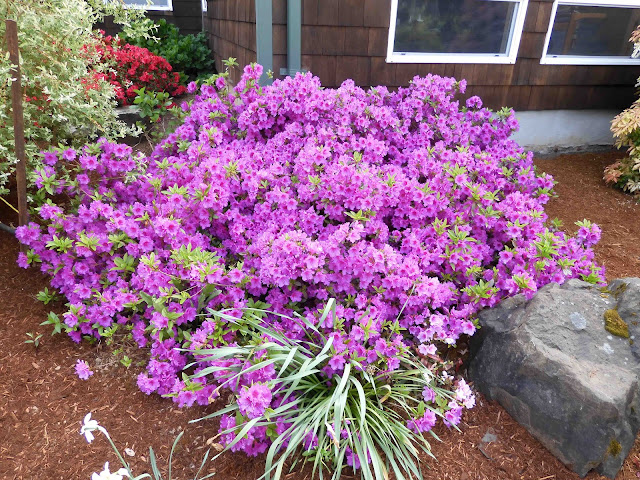 I'm happy to see the cyclamen has bloomed without further interference from piggy squirrels. Sorry for the blur in this image. Sometimes I have trouble getting my camera to focus up close. 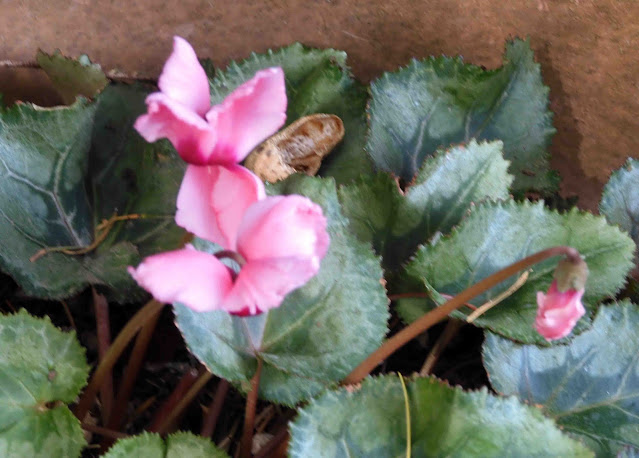 Case in point...it took me eight tries to get these first flowers on the blueberries in focus. I'm told the blueberries won't do much for around 3-4 years. Nevertheless, I'm happy to see the flowers. 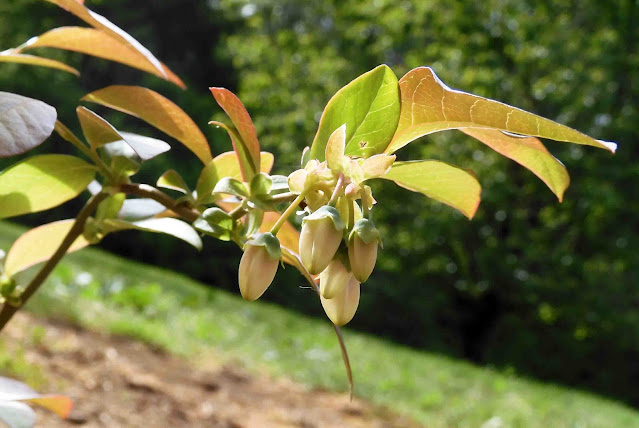 Last year, I noticed this large wild shrub growing along our property line. I don't know what it is, and it's been there all along. I don't know why it took me so long to notice it, but it's blooming right now. Maybe one of you knows what it is. 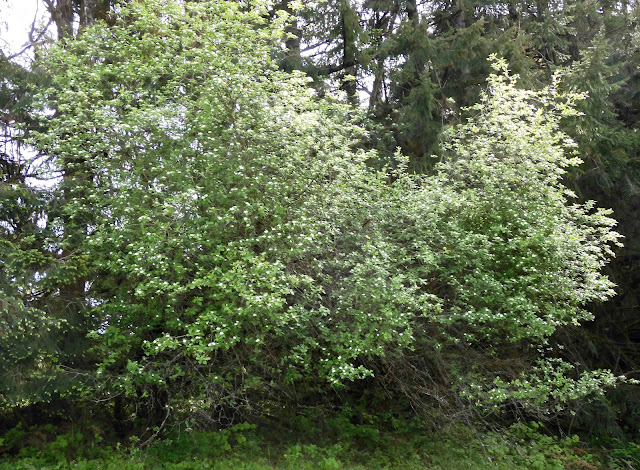 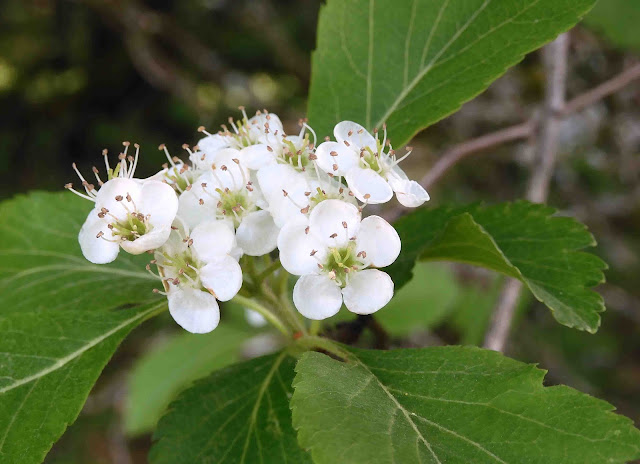 The new clematis from last year seems to be loosening its hold on its buds. I'm hoping this one will open within the next few days, and we can get a look at it. 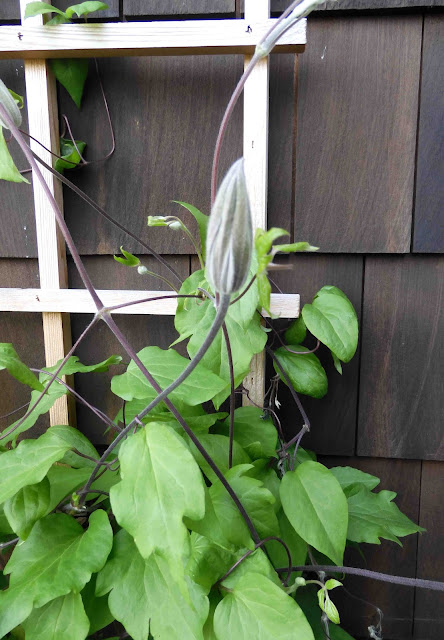 In the greenhouse, the first flowers are forming on the zucchini. These are going to get planted in the garden within the next week. Looks like they could use some fertilizer. 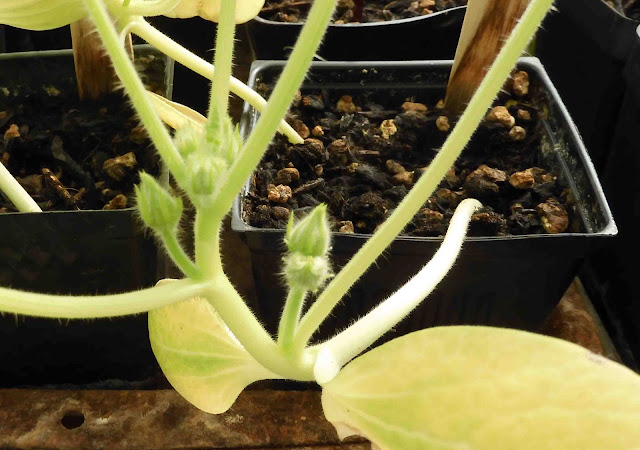 And that brings me to the biggest job for today...repotting the tomatoes into their largest pots of the season. Mike has a haircut appointment this morning, but he's left me plenty of potting soil so I can get the job done while he's away this morning. I can't be hefting 40 lb. bags of potting soil around just yet.
First, though, I'll get started on the Irish blessing stitchery. The day is just getting started. There is lots on today's agenda. Time to get going.
Posted by Barbara at 7:40 AM

When anyone asks me about the Irish character, I say look at the trees. Maimed, stark and misshapen, but ferociously tenacious. ~ Edna O'Brien

Beautiful poppy fields!!
We planted two apple trees this morning and ordered two French White lilacs and some Nellie Stevens Hollies (all deer resistant); the NS hollies we planted 5 years ago are just beautiful this spring. Full of blossoms...
My Grand-mere always had French Lilacs...so I am thrilled to have found some...

Your plates are just beautiful, Barbara!! I do like that pre-coloring--it adds so much...I have some big Rose blocks for cross stitching and I think I will try some coloring to fill in the big areas...
Your gardens look so lovely--springtime is so hoepful isn't it?
hugs, Julierose

Oh those fields of poppies! Wow. How I would love to see them for real. Can't remember when I last had a taco salad (or a Reuben!) and now I'm craving both.

Could it be spirea? My grandmother had them and they are so pretty.

How sweet that Mike thinks of you and makes your life easier. Granted it is to get work done, but it is work you want to do.

Yes, it is wine club pick up time here, too. Lots of vineyards are doing deep discount promotions. One of the wine we really like is 60% off if purchasing a case most were 50% off. Some of our better vineyards were hard hit by Covid as they do the bulk of their high profit sales at wine tasting events. (Meaning full price or small discounts).

There is such satisfaction in planting your garden. Hope and lots of dreaming of the tasty results.

I obviously missed this post, so I'm commenting late. Those poppies blooming are just gorgeous! I just realized that the greenhouse we go to for our plants is known nationwide for its clematis. Who knew?!

Hummingbirds are clever, move the feeder and they will let you know you are messing with their GPS coordinates. They are funny that way. Beautiful azaleas and the projects are beautiful.

So much beauty to see!
Love the plates project!
Happy Stitching!

Hi,
Lovely embroidered plates...I really like all
your flowers, but really like the Poppies.
Have a great day!

I love those plates and the Irish Blessing quilt. I stitched a cross-stitch with that saying for my mother many years ago. Your azaleas are beautiful. Love the views around the winery too. Have a great week.

Your embroidery work is stunning and Taco Salad is so much fun. Loved seeing the views along the countryside. Have a lovely week.

My first time visiting your blog, your embroidered plates are beautiful! According to my "Picture This" app, which is a plant identification app, the shrub you aren't sure about is a Fireberry Hawthorn, also know as a Goldenberry hawthorn. It's botanical name is Crataegus chrysocarpa. It's amazing what you can learn on an app...hope this helps! I've bookmarked your blog so I can look through your old posts..when I'm not at work!

Barbara, photograph your greenhouse for us, please. the photo of the repotted tomato plants is in there isn’t it? It looks lovely. Carol in Texas