When I finished yesterday's post, I went downstairs to be greeted by this guy, uh, girl, uh...who knows? 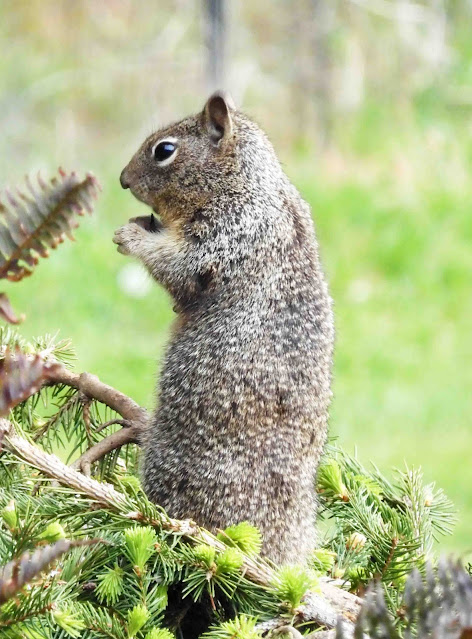 I have an idea this is a pregnant female. We usually get at least one litter of kits each year. They are awfully cute when they emerge from their hole and start running around.

As I mentioned, Big Bertha came home from the spa yesterday, and Pfelicity took her place. It's nice to have her back. Pfelicity does a good job, but she doesn't have the knee lift that Big Bertha has, and I really miss that...especially when I'm top-stitching applique. I didn't do any sewing on her yesterday to speak of. I plugged her in, and got her ready to go, then sewed just a bit to assure that everything was working properly, and then decided to trace out the next embroidery block.

Calendula Patterdrip's Cottage is close enough to finishing, I wanted to get the next block for Pieces of the Past ready to go. This will be the 6th plate for that quilt. The white fairy frost background fabric I'm using doesn't photograph well, but here's the plate I'll be working on next. 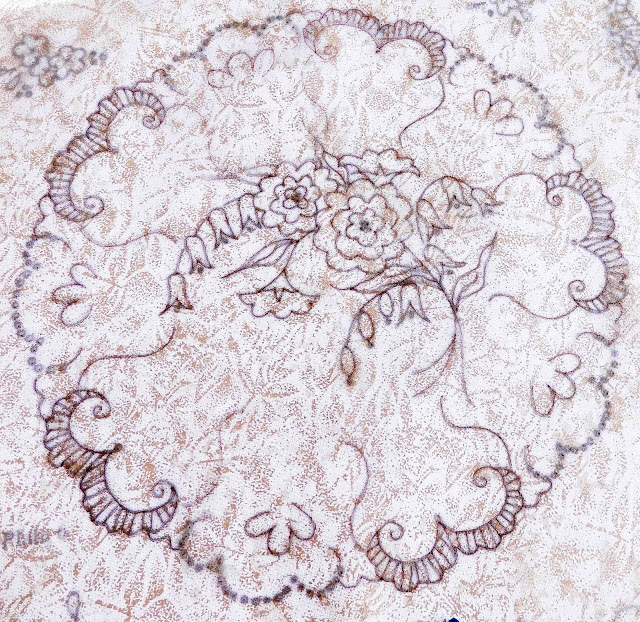 There was some coloring to do, and now it's ready for stitching. 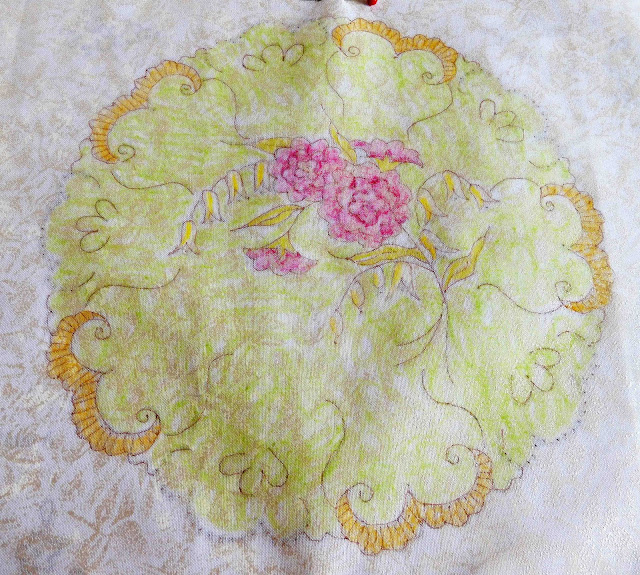 With that ready, I got to work on the quilting for the Poppy Mosaic. In the bobbin, I'm using this 30-weight variegated Coats & Clark thread. These come in such pretty colors. 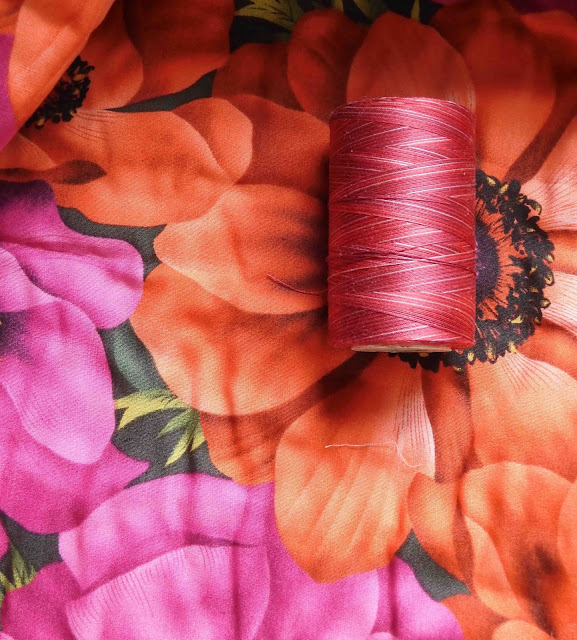 On top, I'm using mostly 40-weight YLI machine quilting threads. I started with black and did some pebbling in the flower centers. 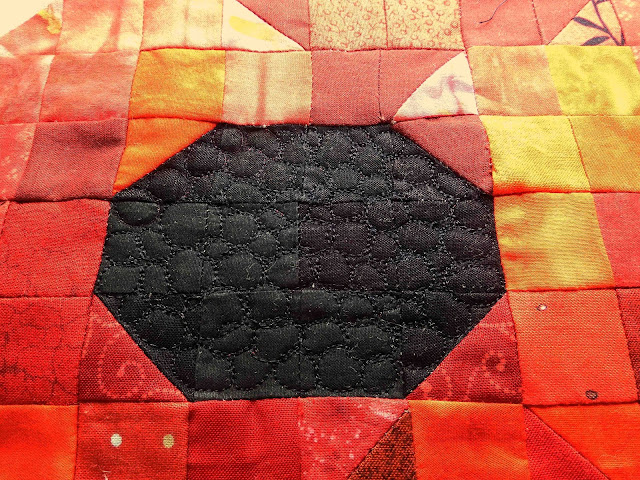 Then I switched to a variegated red for the red poppies. I don't have a lot of this thread left, but there was plenty for my needs. 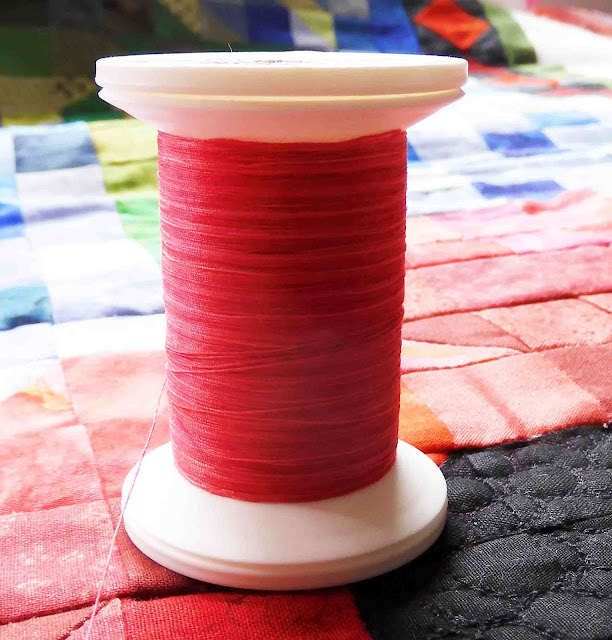 It's a little hard to see, but I did some wavy lines extending from flower center out to the edge and then back again. 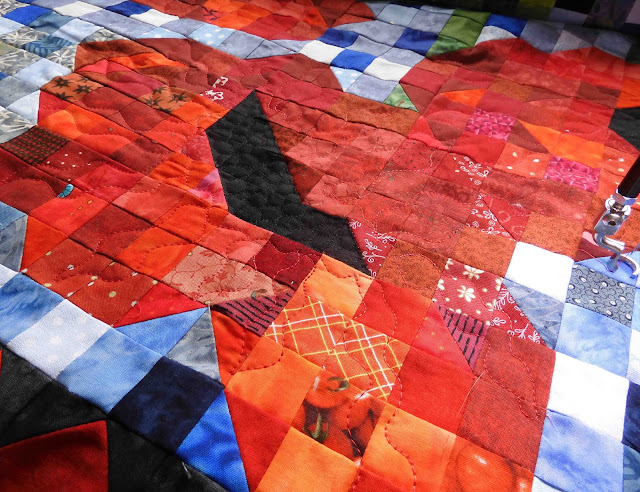 Of course, my quilting cat was there to help. How could I ever get anything done with him? 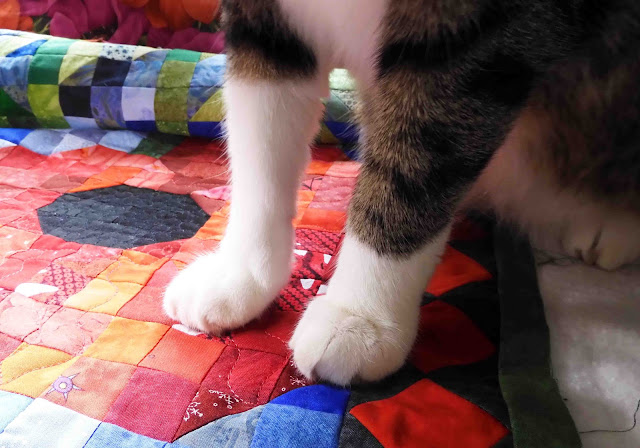 When the flowers were finished, I switched to a variegated blue for the sky portions. 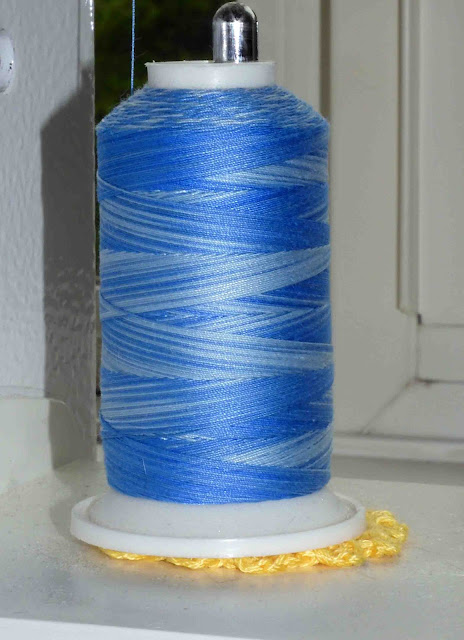 I'm making a windy sky and, in general, just a lot of wavy lines in the sky. When I move down toward the middle of the quilt, I'll do more swirls...or maybe some McTavishing. The blue portions of the mosaic are more spotty as I move along the quilt from top to bottom. I was just getting started on this when I decided to quit for the day. 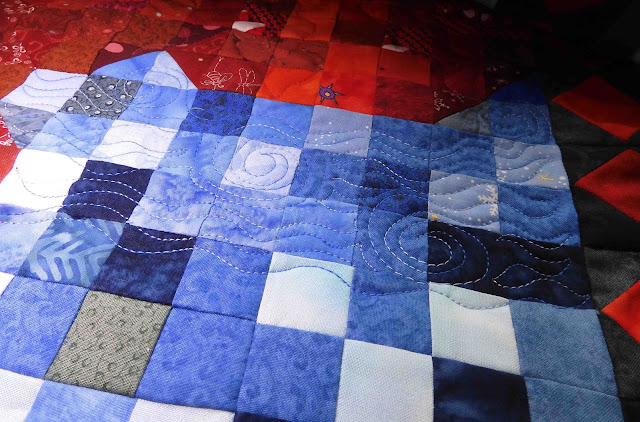 It was nearing dinner time by then. When I left the quilting room, I found these two...very worried about whether their dinner would be served up on time. 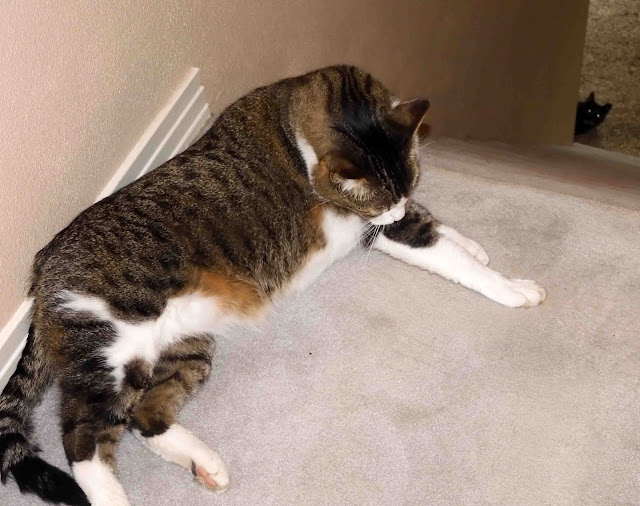 This morning, I'll do some more stitching on Calendula Patterdrip's Cottage. I don't know if I'll finish the section I'm working on today or tomorrow, but I expect it will be no later than tomorrow. After that I'll get back to my quilting. It's looking like a sunny day, and so there might be some weeding on the agenda as well. 'Tis the season for weeds, after all.

It is a token of healthy and gentle characteristics, when women of high thoughts and accomplishments love to sew; especially as they are never more at home with their hearts than while so occupied. ~ Nathaniel Hawthorne

Too bad there isn't birth control for squirrels (just sayin'). I like the way you're quilting the poppies. Have to ask because I'm curious...do you know the brand of that variegated blue thread? It's so pretty!

Love that variegated thread for the quilting --really nice look...
Our squirrels are constantly digging digging digging holes in our yard--hate it. They and the chipmunks 9which, unlike a lot of others, I do not find cute at all!!) have tunnels all over--I am thinking like the guy in Caddyshack..BOOM
good-bye for ever!! Anyway...I got my next applique pieces traced onto freezer paper-- now I am resting --baby steps, right??? I got the butterflies sewn in rows (3) with their alternating fairy fabric...now to start another embroidery piece...decisions, decisions....hugs Julierose

I think Smitty is dreaming of all those juicy tiny morsels in his future!

Very pretty threads that will showcase your project beautifully. My quilty buddies have stayed out of the fray of late - maybe I haven't been working on anything that suits their taste.

All of those variegated threads will blend in well in their respective places. I was surprised you are using a 30wt thread in the bobbin. The poppy quilt is going to be a nice companion to the pansy one.
Pat

I love the knee lift on my machine. Once I was used to it, I let people in the market for a new machine know how helpful it is to improve ones sewing. Dang nab squirrels. In our neighborhood, unlike the rest of the area we live in, reside in trees. I’d been hearing a thud from time to time where I sit next to a window. I finally saw what was causing the noise. You guessed it, a squirrel. I guess it wants inside the house as the cat food on the back deck for strays is not to its liking. The squirrels thunder across our roof all the time. It catches visitors attention. There is no attic so no buffer for the sound.

The poppy quilting is looking good! We have beautiful sunny days here, but cool temps and chilly wind. I met a friend for coffee yesterday and we sat outside; both of us were pretty chilled when we were done. Later that evening, I realized my face was sunburned. Enjoy your time outdoors today!