When I went downstairs after writing yesterday's post, I found the kitties hard at work. Sadie had lap-warming duty: 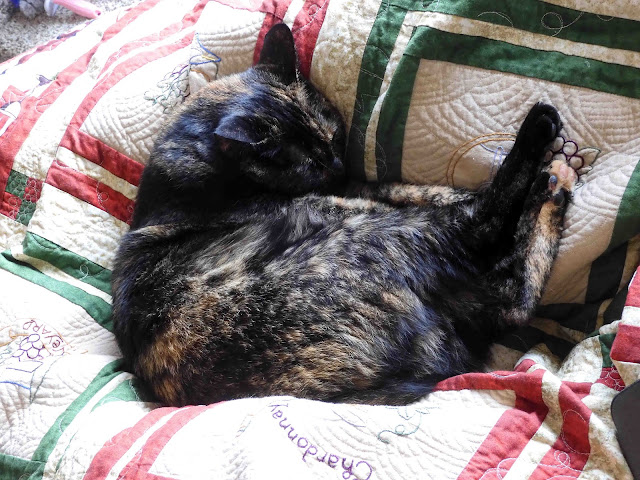 Smitty was...hm...keeping his kitty pole balanced? Those things tend to topple over sometimes, and so he was keeping it at a proper cant. 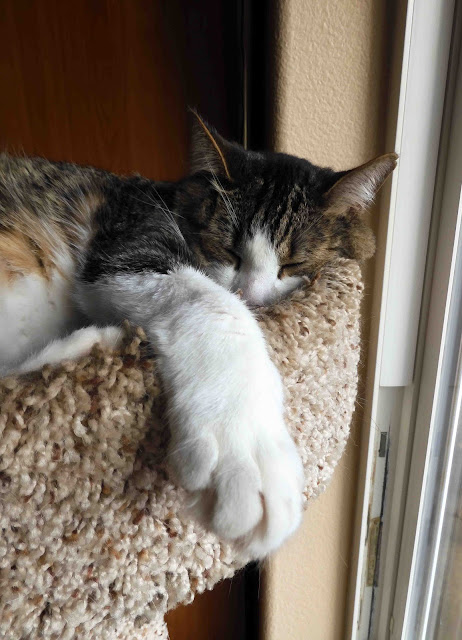 It was a good day for gardening yesterday, and that's what we did. Sunshine is nice, but any dry day will do. I needed to do some planting and some pruning. There will always be weeds to pull, but that wasn't on yesterday's agenda. Instead, I planted two more chive plants in the herb garden. The sage plant and the three lavender plants so took over in the herb garden, they crowded out the rather large population of chives I had a few years ago. I was actually thinking I might need to thin the chives, but then, the garden did it for me. Now, I don't have anywhere near enough to make chive blossom vinegar. The only chive blossoms are the ones you see in the foreground of the image below. I've marked the new plantings with pink arrows. 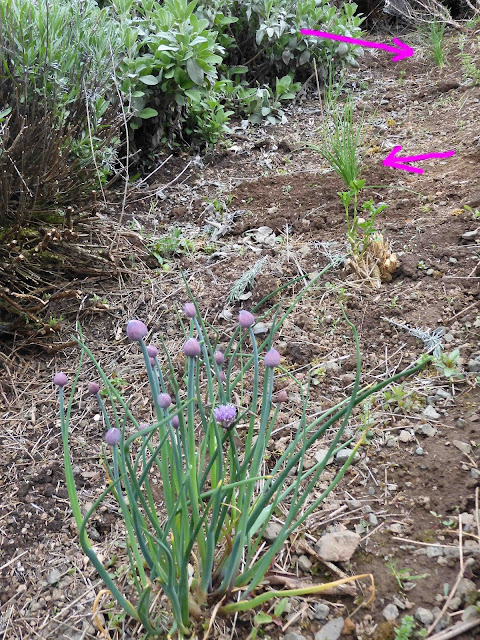 Also, I planted the cherry tomato in one of the whiskey barrels. It's a little hard to see below, because it shares its barrel with some wild strawberries and some volunteer pansies. It's right in the middle with that little bamboo stake. Look closely, and you can see its yellow flower on the right. 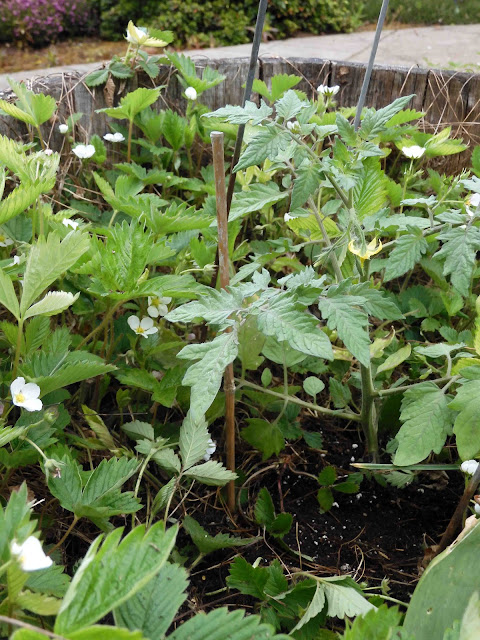 You might remember that last year's cherry tomato was eaten off to the ground the day after I planted it. This year, we've put fencing around the tomato cage. I don't know if we'll leave the fencing, but it will offer protection until the plant is large enough to fight for itself. 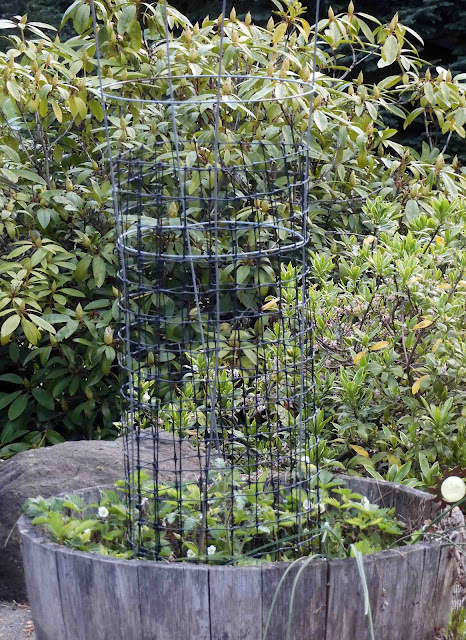 I severely pruned back a hydrangea that had grown leggy. Then, there were three little pots of black eyed susans to plant in the whiskey barrel at the front. After that, I took a little walk around to see what's blooming.
The first fully-opened rhododendron has made an appearance. I believe we have five rhodies, but only two of them have flowers right now. 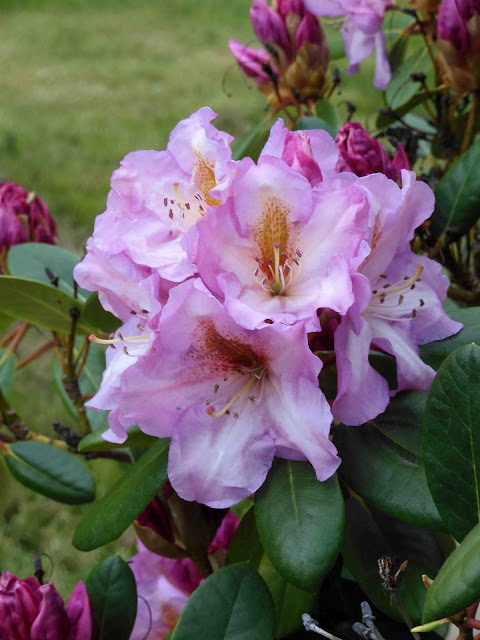 I worried that the echinacea might not return this year, but there it is. Looks like the raking fairy needs to come get rid of all those dead leaves. Patience, Grasshopper. 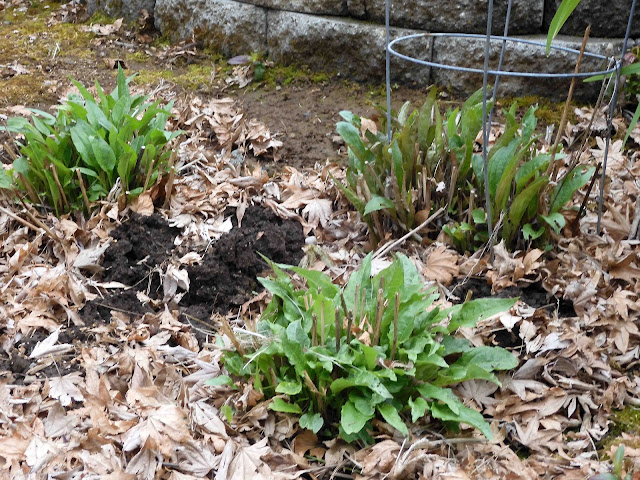 Mike planted the new clematis. It's a small plant, growing only to about 3-4 feet, and so we've given it a free-standing trellis. I'm excited for it to bloom. 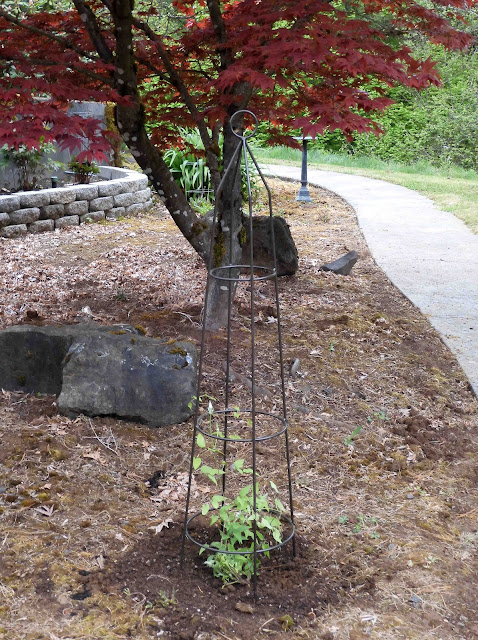 The apple tree is the last of the fruit trees to bloom. This is our sad little apple tree, but it produced about 3 dozen apples last year. 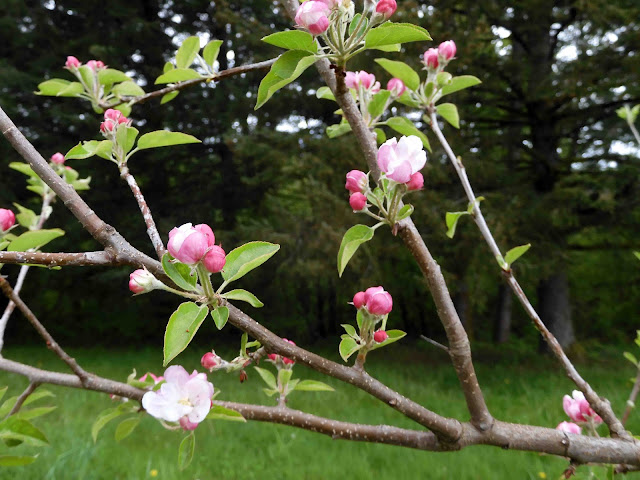 Also, I found more buds on the poppies. The poppies always generate lots of anticipatory excitement. As you look at these pictures be sure to pause for a moment to admire my beautiful (cough) manicured fingernails. And, yes, I did cut myself while chopping onions a few evenings ago. It's always the middle finger. I'm sure there's some kind of message there. As for the poppies...here are a couple more... 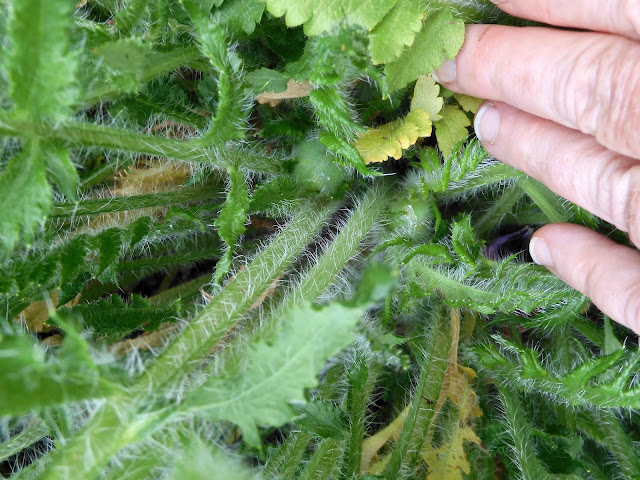 There's another one over here. 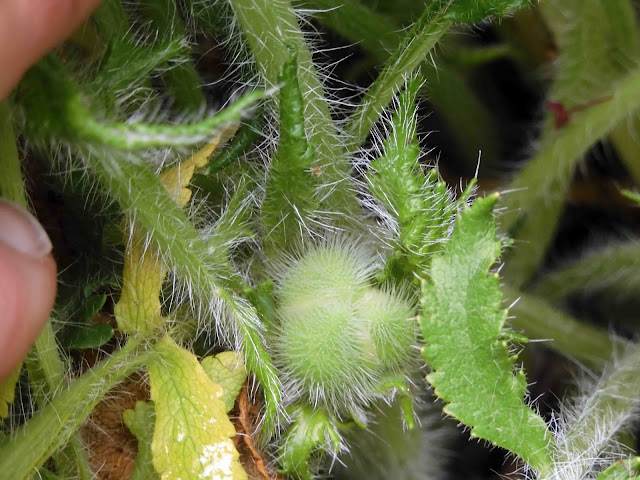 The lilac is beautiful right now. 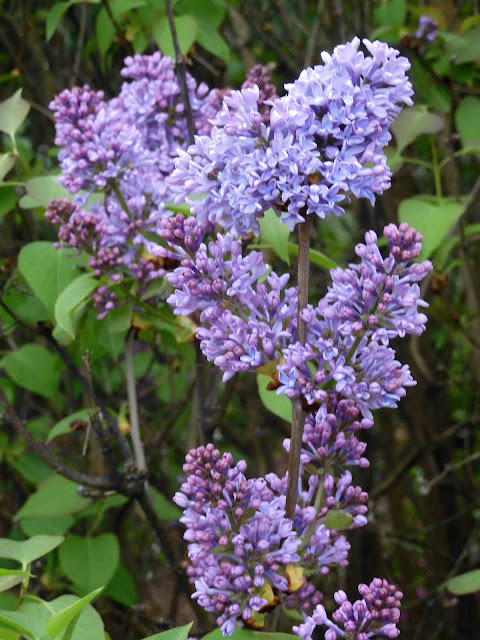 And the golden chain tree is developing flowers. This is one of my favorite trees. 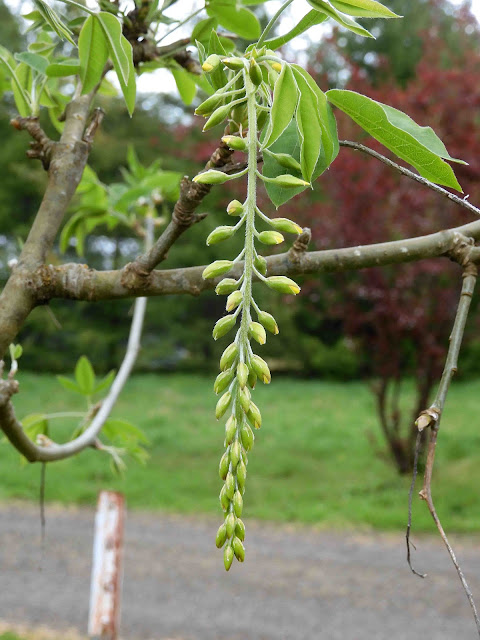 The Gracie Memorial Catnip Garden is doing well. It sprang up there in that corner last year, behind one of the hydrangeas. It probably thought it was being a weed, but we let it stay and moved Gracie's stake nearby. 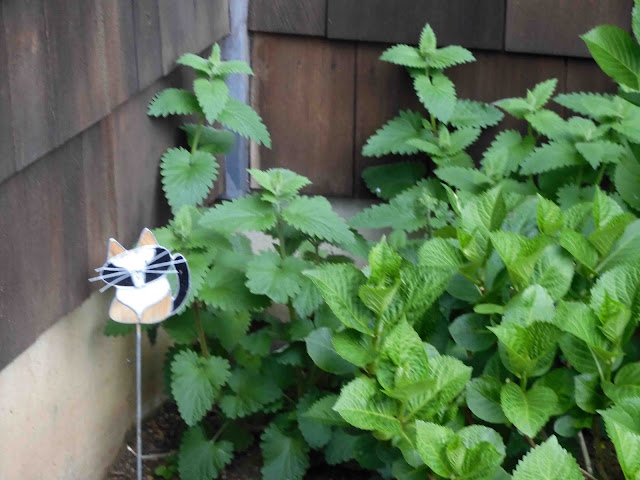 The red azalea is blooming away. 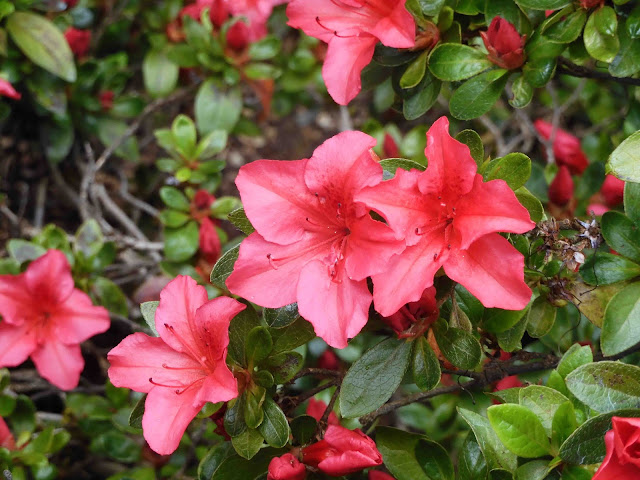 While I was standing there, a hummingbird came to the feeder. 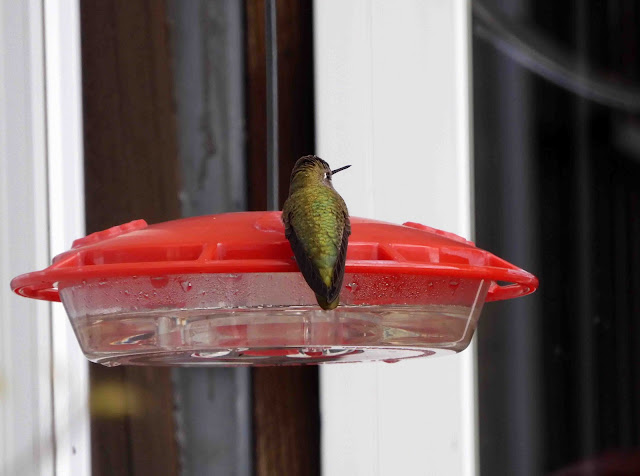 It probably thought turning its back and ignoring me would make me go away. 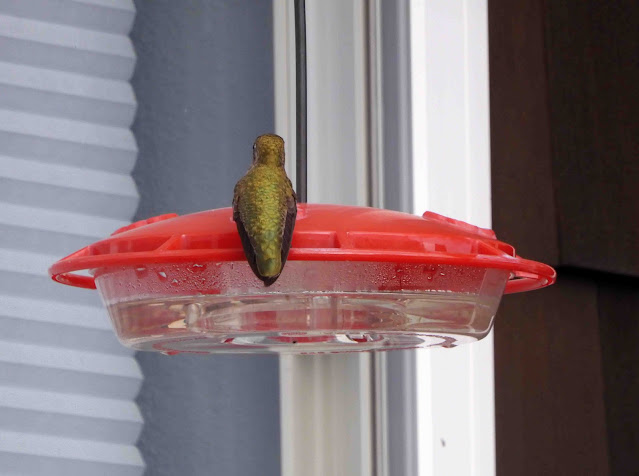 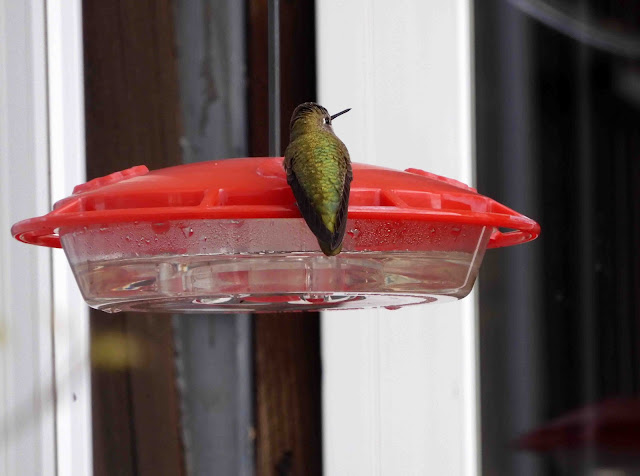 Kitties were interested in something else. Squirrels would be my guess. 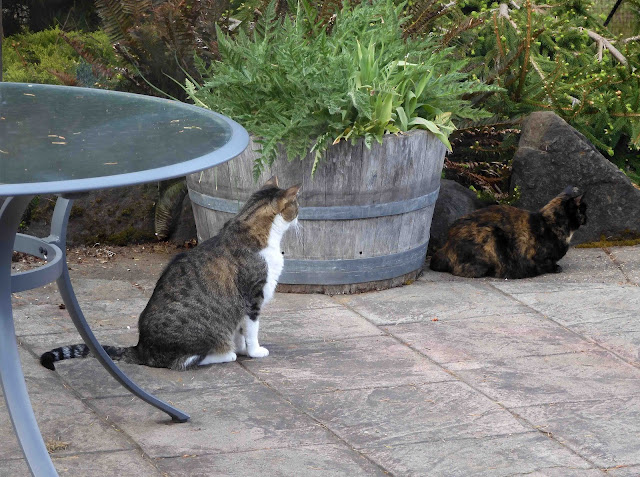 So I could have done some sewing then, but Mike finally commited to an ATV trip to Colorado in mid-September. We went a couple of years ago, and we had such a blast, we've talked many times of returning. There was a question in his mind whether to go to Colorado, or whether to go see a car race with our son during the same time period. The car race is still "TBC" (to be confirmed), and so he said something along the lines of "screw it," and decided to start planning for Colorado. Well. Count me in.
The only thing better than taking a trip is planning it, and so I went to work looking through my folders for items of interest, estimating mileage, looking for campgrounds, etc. I came up with these two maps for the beginning of our trip. I can only enter nine destinations per map, which explains why there are two overlapping itineraries. Here's the first. This one is pretty well settled. It mainly gets us to Ouray, Colorado, and Silverton, Colorado, but we will probably stop for a day or two in Goblin Valley State Park for some sight-seeing. 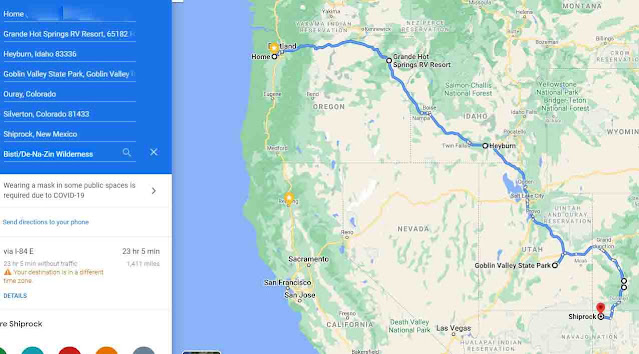 We'll be riding ATV's in Ouray and Silverton, and then moving on to northwestern New Mexico to see a few places we've wanted to see for a long time. It's always too cold in that area when we travel in winter, and so this seems like a good opportunity to knock off another few bucket list items.
The next map is still in flux because our plans also include riding ATV's in northern Arizona. I've added in some destinations we'd like to see, but this is all subject to change between now and then. Mike still has to take a look at the Arizona OHV (off highway vehicle) book and figure out where we should ride.

It's am ambitious journey so far, but I've already deleted about four destinations. They turned out to be so remote there was really no place to stay unless we were prepared to drive a hundred miles or more both directions to see them. Maybe if we were younger and into backpacking or tent camping, but I'm afraid those days are long gone.
So, instead of sewing, that's how I spent the rest of the afternoon. Today we're picking up Big Bertha from her spa treatment and dropping off poor Pfelicity. Pfelicity doesn't get a lot of sewing time since she's the machine I take to classes and when we travel. In the time I've owned her, she's never been in for service. It seems like a good time to pamper her a little.
When I came upstairs to write this post, I noticed Smitty has lap-warming duties today. 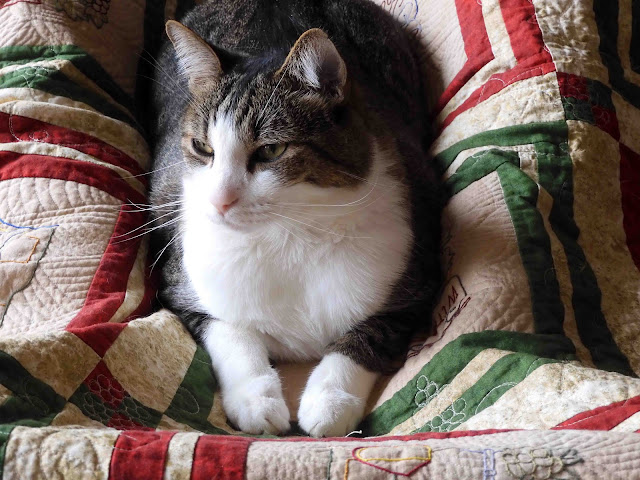 Poor Smitty. It's just work, work, work. The cat never gets a break. And, obviously, he doesn't get nearly enough to eat either. Please paws for a moment and say a purr for Smitty, the Brave and Overworked.
Posted by Barbara at 9:02 AM

Wherever you go, go with all your heart. ~ Confucius

I love your garden photos--so interesting to see how things are doing this year...so far I haven't gotten any herbs planted--a bit early yet here...
This year I plan to pot them up lining our front patio...but, I did send for some caladmiums for the shady corner near our front doorway...

I am getting that spring "antsy" gardening bug--even though I don't really call what I do really gardening anymore--more like some "puttering about..but it's all good...;)))

That is quite an ambitious trip you are planning...looks like fun...
Hugs, julierose

Hovenweep is a nice place to visit. It is a little out of the way. When we saw it years ago, it had similar sites to Mesa Verde but less developed. We lived in Four corners region years ago.

I'm constantly surprised at how far along your garden is compared with here where the daffodils are just barely starting to bloom now. How exciting to be planning a trip - hopefully things will be much safer by then. At least being able to camp lessens the risk overall. Amazing to see a hummer sit still long enough for photos.

Always look forward to your flower photos - we have weeks to go before anything here. NY is lifting all restrictions on May 19 - not that I will do a lot of 'mingling' yet, but it is a sigh of relief.

It looks like a lovely day in your garden. What a thrill to see the blooming possibilities. Sadie and Smittty look to be very content. I attended a water aerobics class in the morning and took a long nap afterwards. All the plans for the day were discarded. I wonder what new parks or curiosities you will put into your trip planning. You always seem to find some unique possibilities in your travels.

You have quite the green thumb!

Looking at the Rhodie, I've decided I might need some for my yard, so I'm going to look into that when we go get our spring plants. I'm a bit envious of all your lovely plants (maybe there's an inner gardener in me after all?). Have fun planning the trip - I can see how that would be such fun that the hours would fly by!

As Sharon said, your plants are much further along than ours. We still can have nightime temps in the 30's and frost is still possible until late May. I have a whiskey barrel planter that is falling apart and need to figure out what to put there instead. I'm lousy at garden record keeping, but I think it's probably about 15 to 20 years old. There's always something that needs to be replaced.
Pat

those leaves make good mulch, and help keep weeds out.