Yesterday morning, I thought I knew how the day would go...slow-stitching, then more quilting. I spent way more time on my slow stitching than expected, but I was determined to finish off Block 2 for Calendula Patterdrip's Cottage. 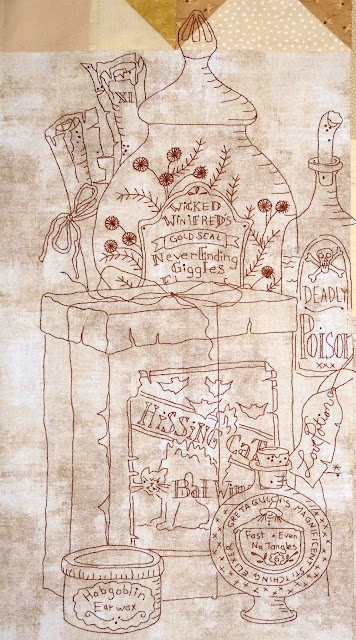 As I've mentioned before, this very large piece is made up from Blocks 2, 3, and 4 of the quilt pattern, and it spans nearly the entire width of the quilt. It takes up approximately 1/3 the height of the quilt as well. Block 2 is probably the most densely stitched of the three blocks. 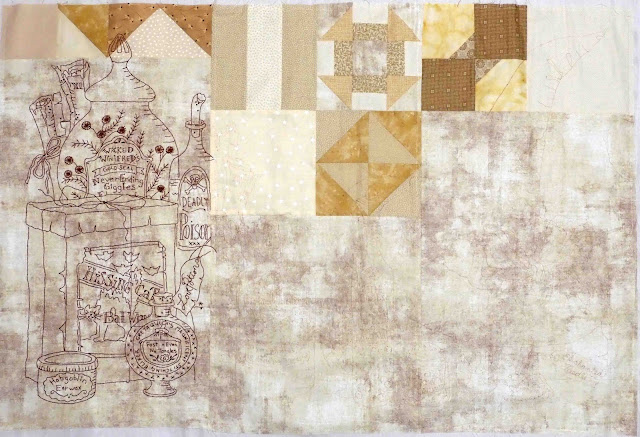 From the get-go, I decided to stitch the blocks one at a time, as if they were separate. And so I stitched to the seam line between Blocks 2 and 3, and I'll leave it at that until its turn comes around again. It's hard to see in the image above, but the whole design is traced. When I've finished with all three blocks, there is also a tree branch that will be traced in across the top. It's intended to meet up with the branch in Block 1. You can see it on the left in the image below.

I made a mistake when I traced in and stitched the tree branch on this crow block. It took me a while to figure it out, but then I realized, I can fudge a little when I trace in the rest of the tree branch. I'll be adding in the birds' feet at the same time. If this doesn't make sense, then don't worry. It isn't important, and it'll all make sense eventually.
It was a nice day out, and so I went outside and pulled a bucket of weeds. The place is looking a lot better, except for the tree limbs that are still scattered around. We're making progress. The worst of the weeds have been pulled now (or at least sprayed), and so we're making headway with the weeds too.
We had a little "We're All Vaccinated Now get-together" with our closest neighbors last night. The neighbor hosting the event laid out quite a spread of cheeses, sausages, home-baked goods and wine. My small offering was this plate of  Cherry Tomatoes Stuffed with Mozzarella and Basil. 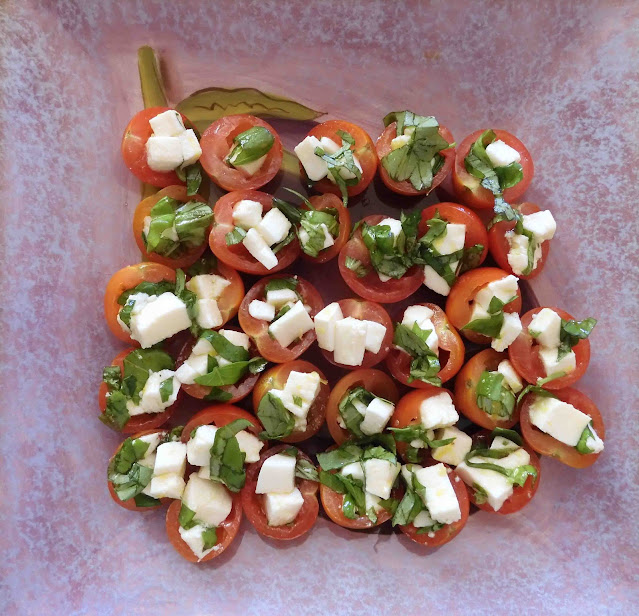 This dish is a lot better with delicious garden tomatoes, but those are not in season here yet. I went with the grocery store variety because I was trying my best to use up a large log of fresh mozzarella cheese. I purchased some for a recipe several weeks ago. While making my purchase, they had large logs, reduced to half price, or else much smaller logs for full price. The larger ones were actually cheaper than the smaller ones, and so it made sense to go that way. Ever since, I've been trying to figure out how to use up the leftovers. This little dish used the last of it. 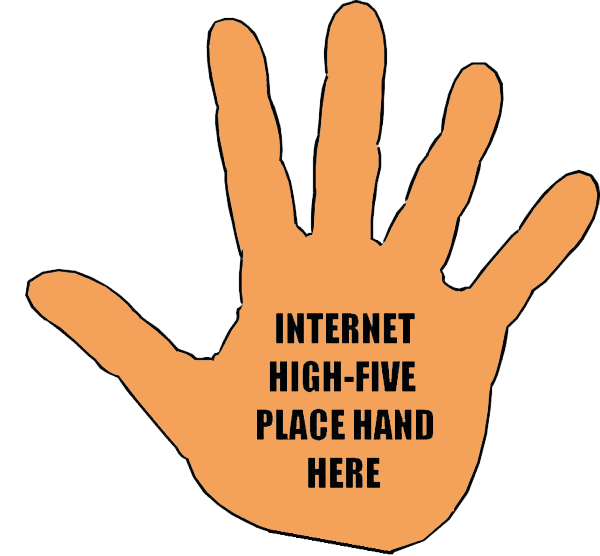 There was only about an hour left in the day by that time, and so I didn't get very far with my quilting. I finished up the section of sky I was working on. Sorry for that bright sunshine in the upper left. 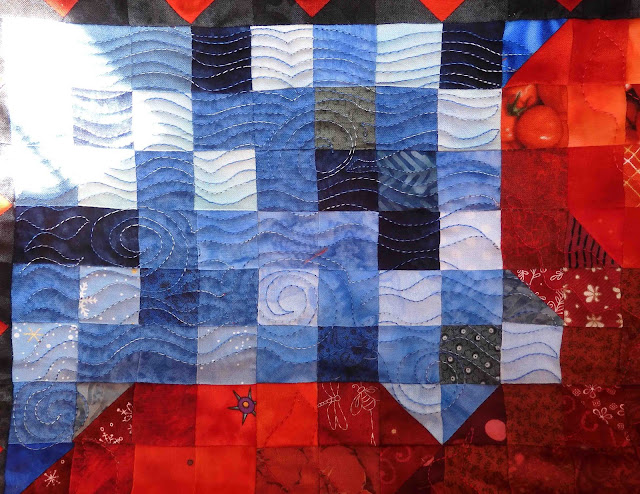 The section on the other side of the quilt was a little more tricky. The connected pieces of sky take up a large portion of the quilt, but with lots of little narrow areas, nooks, and crannies. I'm doing the same design there. 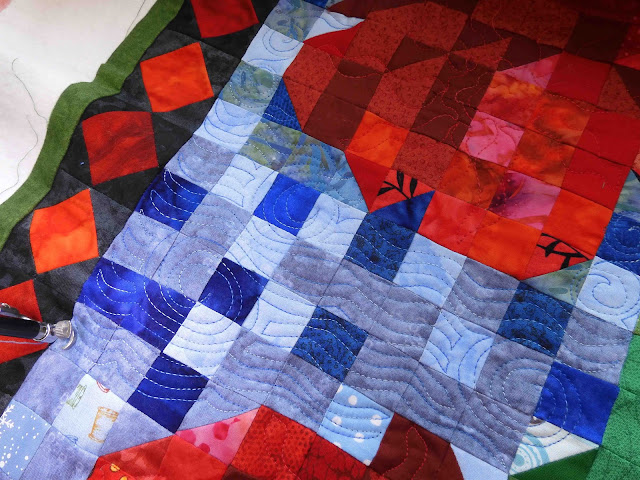 In these little narrow areas, I'm doing back and forth reverse twirly-swirlys (technical quilting terms...try to keep up). 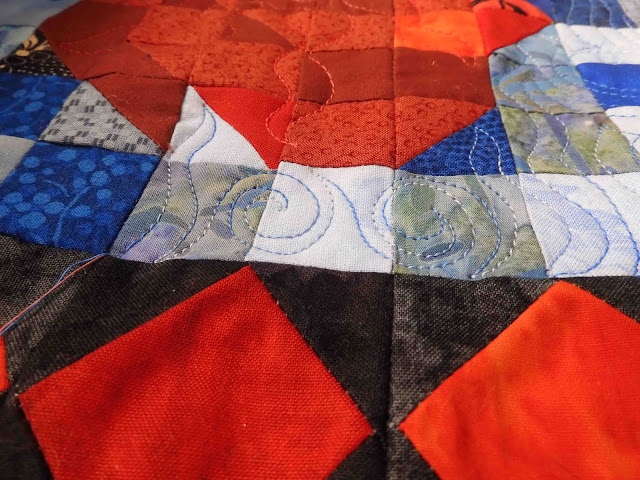 I'm thinking of doing that same thing in the narrow stems of the flowers, and so that little section was a good place to practice my idea. Hopefully, I'll get a little more done on it today.
In the final few minutes before leaving last night, I hooped up the next block for Pieces of the Past. There was a little short piece of floss loose in my project box, and so I stitched just the tiniest bit in the upper right-hand corner. 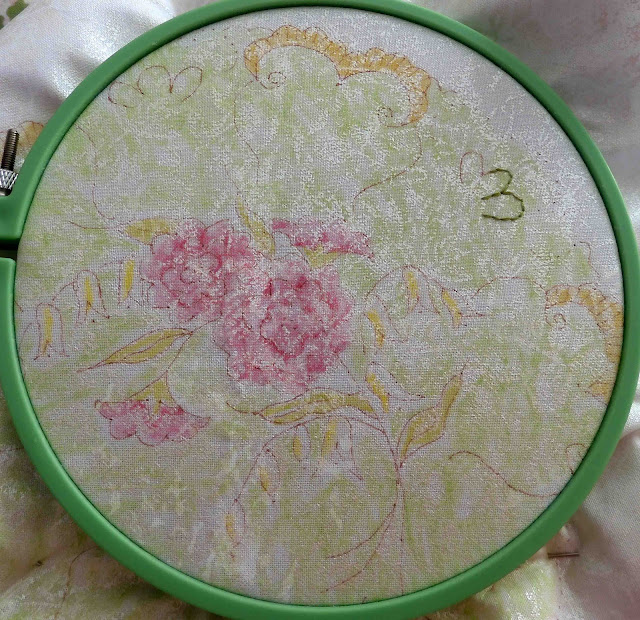 When I'm finished here, I'll get going on this full speed ahead. And it's slow...so full speed is actually just a snail's pace.
So that's all I have for you today. Happy Cinco de Mayo, everybody!
Posted by Barbara at 7:37 AM

I can think of many reasonable excuses for needing a cocktail, but Cinco de Mayo is always a no-brainer. ~ Rachel Hollis

You left out cats!!! I'm probably going to try to emulate your sky quilting on the piece I'm working on.

There's more than one reason to celebrate Cinco de Mayo! Enjoy every one of them!

Hi Barbara, slice that Mozzarella into about quarter inch slices, alternate with slices of Roma tomatoes and cucumbers. Season with your favorite seasonings, I use tarragon, garlic, italian seasoning or greek seasoning. Sprinkle with olive oil and balsamic vinegar (I like white from Trader Joe's). I usually put in a tray type tupperware container with lid in the fridge to nibble on or have with lunch or dinner. Yummy!

Oh, and mu basil is going strong right now and I have the cheese - will have to pick up some cherry toms. You are getting more quilting done than I - no matter how little you think.

Your Calendula Patterdrip's Cottage is going to be stunning. I love you stitching on that rather large block. It alone, would be beautiful framed but in a quilt it will sparkle. Definitely sounds like a fun day with beautiful creativity, great conversation, friends, food and plenty of joy. Happy Cinco de Mayo.

Your CP Cottage will be so lovely--nice idea to do the embroidery in smaller sections...
The stuffed tomatoes look yummy --nice that you could get together with neighbors once again...
Hugs, Julierose

I like unplanned days - which is what most of mine seem to end up being these days. I obliged and did the high five - couldn't resist.

Cinco de Mayo was a quiet holiday for the second year. Usually there is all kinds of partying in our Hispanic community. Car horns blare, flags wave and lots of mariachi music. Taxes essentially done. Just need to hit the send button and store the hard copy data. At the end of the day hubby came home to find my car had leaked transmission fluid. It ran all the way out of the garage. Ah...tow truck will be called in the morning and taken to the mechanic.

Like your progress on stitching. Nice of your neighborhood to have a vaccination gathering.

You made the most of your unplanned day, I think! Yay for figuring out how to use up that mozzarella, too! You and your neighbors have been through quite a bit (fire, etc.) without being able to be together - I hope you all enjoyed catching up.

Those tomatoes look deeee-licious! I think I'll borrow the idea for our smocking chapter's retreat at the end of the month. Might do some with feta and rosemary, too.

I'm amazed by how much stitching you manage to get done even on a slow day, and it's all lovely.