We were up and out of the house early yesterday morning, sowing seeds in the garden. We had it all finished just a little before lunch. Of course, our success was mostly due to the purrticipation of the farm cats. They kept the squirrels at bay while we built bean poles and strung garden twine. 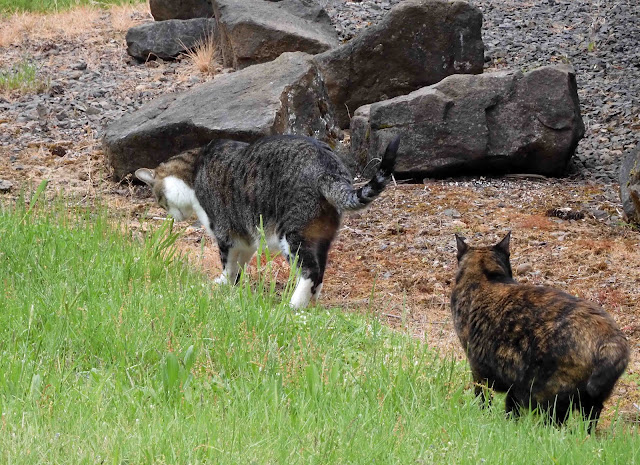 When it was all finished it looked like this: 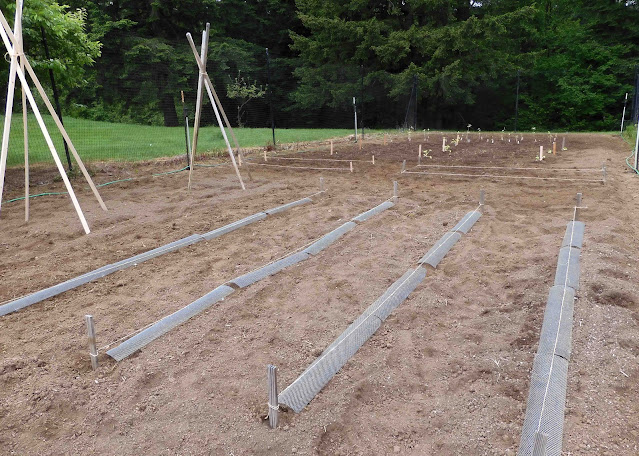 There are three bean seeds planted around each leg of the bean poles. The four rows in the foreground are for corn. They're covered with gutter guards to protect the freshly sprouted seeds from crows. (I don't know if the crows would be a problem, but we do this anyway.) The four perpendicular rows toward the middle are beets. Last year, I planted the beets in two long rows, but I decided I wanted to be able to walk through the middle this year. Don't ask me why. I can't really say. Beyond are hills of cantaloupe, zucchini, and melon. Beyond that three rows of sunflowers. Beyond that...the bee garden. The wildflower seeds arrived on schedule yesterday, and now they too have been broadcast over the soil. Nothing to do now but weed and wait.
When we were finished, I took a little walk around. I noticed plums forming on the plum tree. 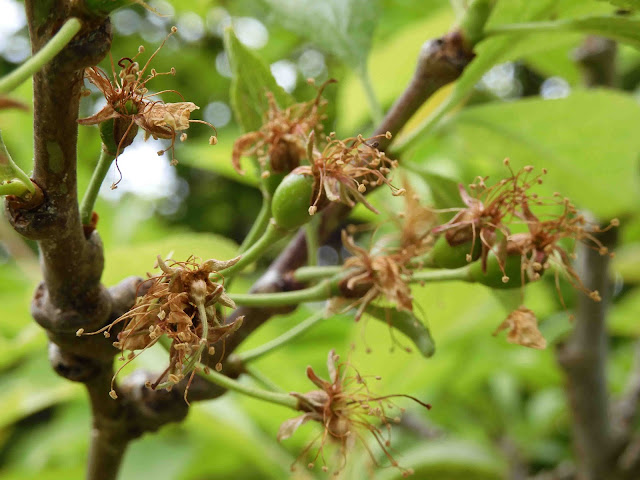 Checking the watering inside the greenhouse, it seemed like a good time to fondle the tomato blossoms. I've mentioned this before, but I should explain to anyone who might be new that the tomatoes are grown in a greenhouse because of our short growing season. I've read that just the wind blowing through should be enough to pollinate the flowers. Also, we get flying insects through there, and they do their part as well. Nevertheless, I give them a little help with a soft make-up brush by brushing and touching the flowers with the tip of the brush. 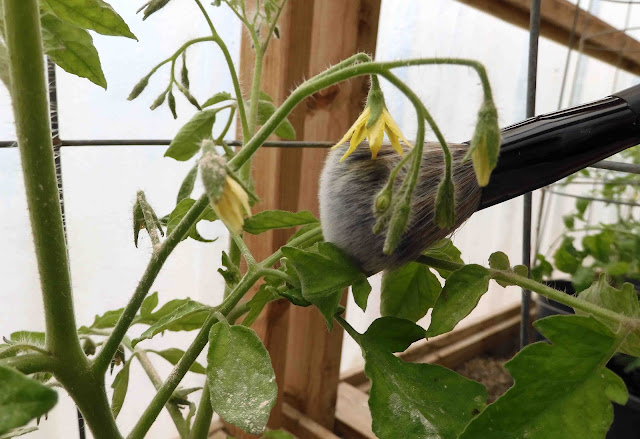 After yesterday's post, my friend Carol in Texas asked to see the greenhouse. Carol, you are no-reply, and so I can't respond to you personally. For anyone else who would like to see the greenhouse, you can read my old blog post right here, written about a month after it was delivered. Mike had just finished creating a floor using gravel and brick pavers. It's a fiberglass greenhouse from Solar Gem. It's a quick and dirty way to have a greenhouse, and comes as a sort of kit.
After we'd been using it for a while, we made some modifications from its new condition. We moved the potting bin to the opposite side since the left side gets more sunlight. Also, we added some industrial barrels filled with water (I think they held vegetable oil originally), and painted black to add thermal mass. It keeps the greenhouse warm even after the sun sets. You can see a more current picture right here. Mike also set up an automatic drip irrigation system. This is the 11th season we've used our greenhouse, and it has worked well for us. Many a tomato and gallons of salsa have resulted from our efforts.
Moving on, I was finally able to get an in-focus picture of the cyclamen. 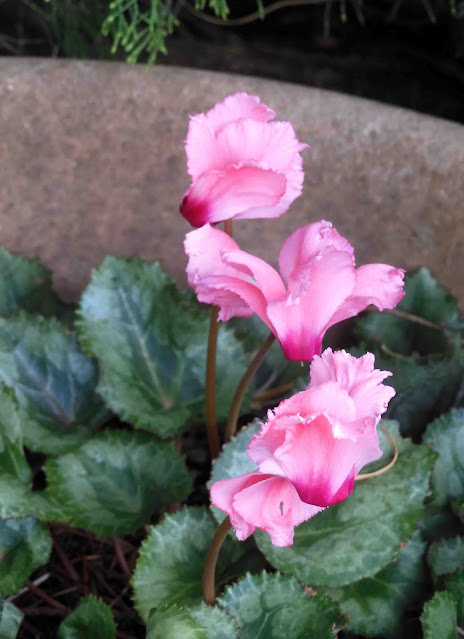 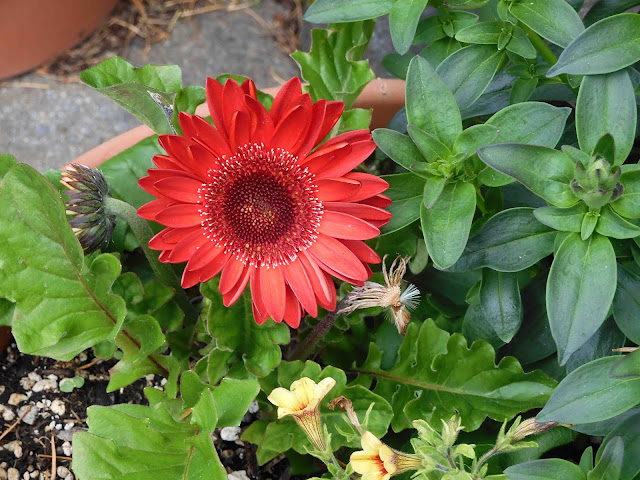 All of the annuals are doing well right now. 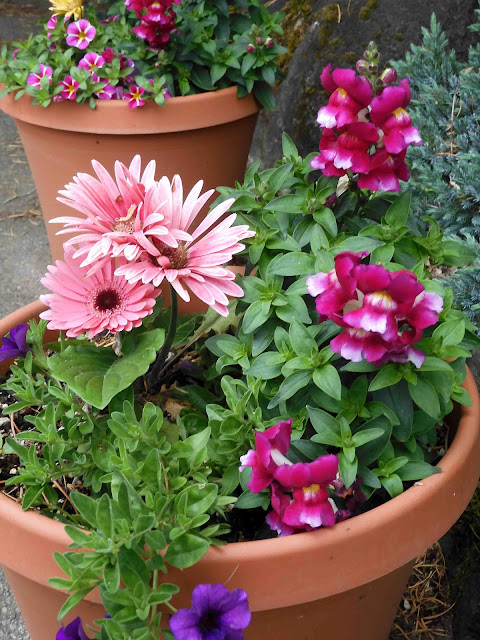 I'm on diligent flower watch, waiting for this clematis to bloom. The petals are turning purple now. Surely it will open on the next warm day, don't you think? 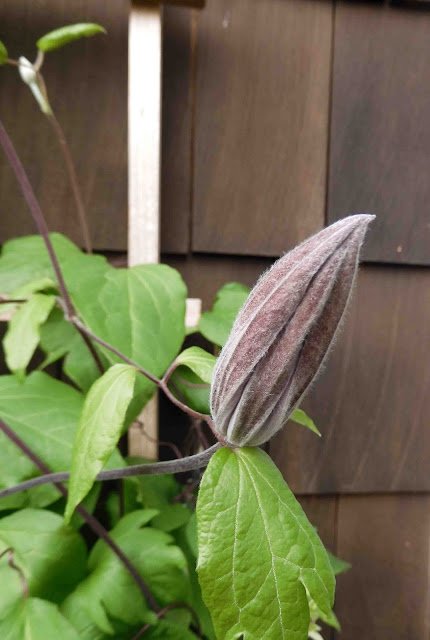 The golden chain tree is looking good. I've worried about its lack of foliage. When I was in town yesterday, I noticed the others looked just like ours, and so I guess my worries seem misplaced. 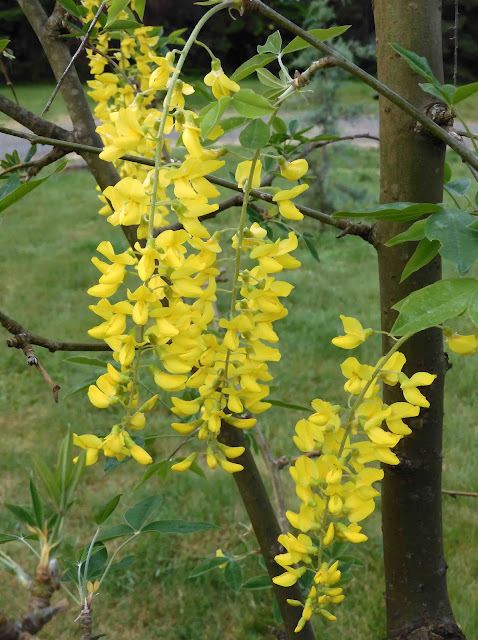 Also on eagle-eye flower watch are the peonies. They are covered in buds. It's the second year for these. If all the buds open and bloom, we should have lots of flowers this season. 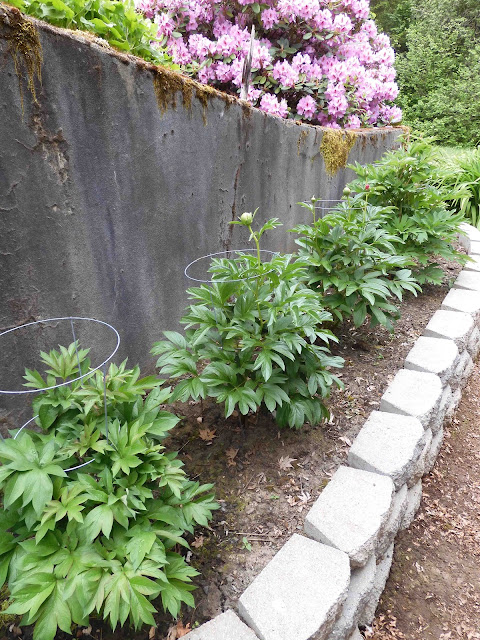 My money's on this one to bloom first. This one is called "Joker." 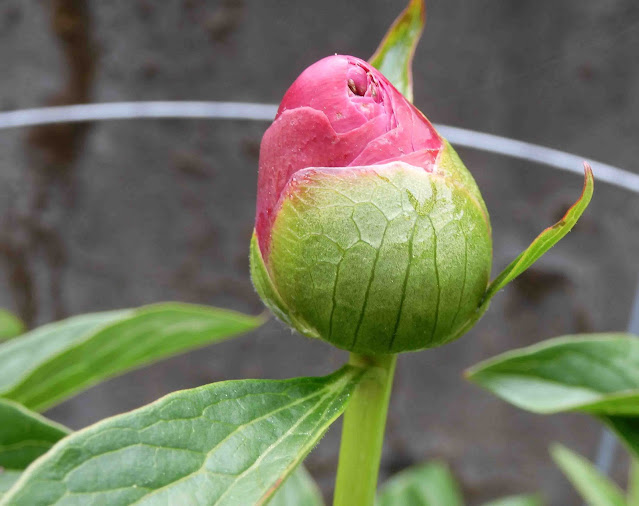 Here's a picture of one I swiped from the internet. This is what it should look like when it blooms. 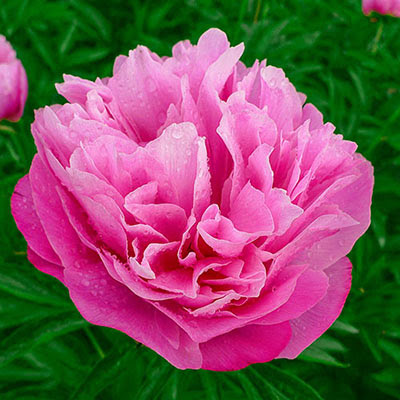 This next one is the Rosy Prospects peony. This is the one that broke my heart last year. I'm not sure I trust it now. Does anyone else get emotionally attached to their flowers? 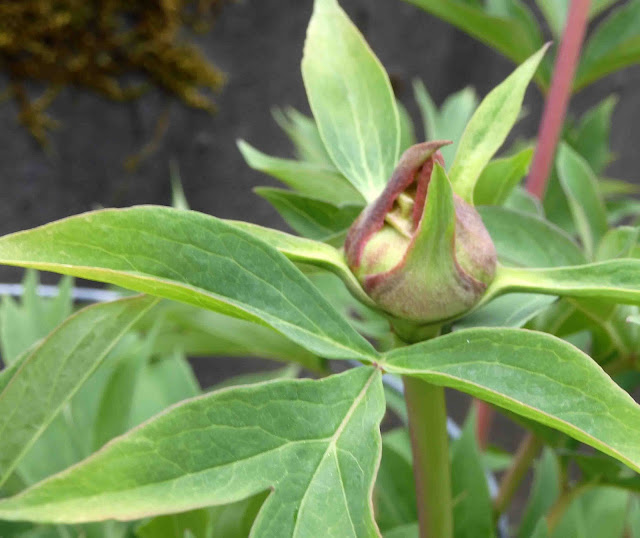 The first rhodies to bloom are fading now, but this one is just taking over as the star of the garden. It still has a ways to go, but more flowers are opening. 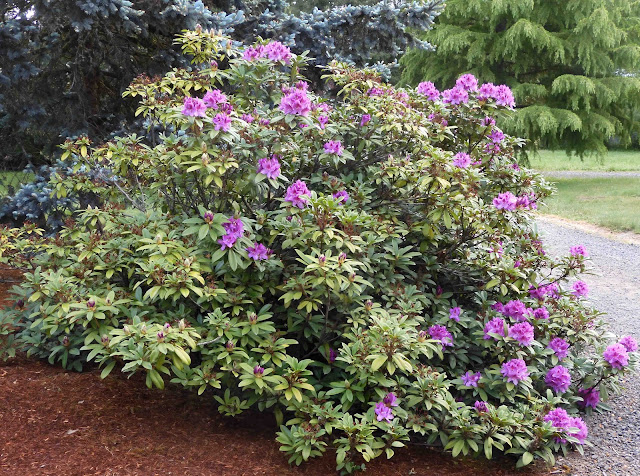 Here's a close-up of one of the clusters. 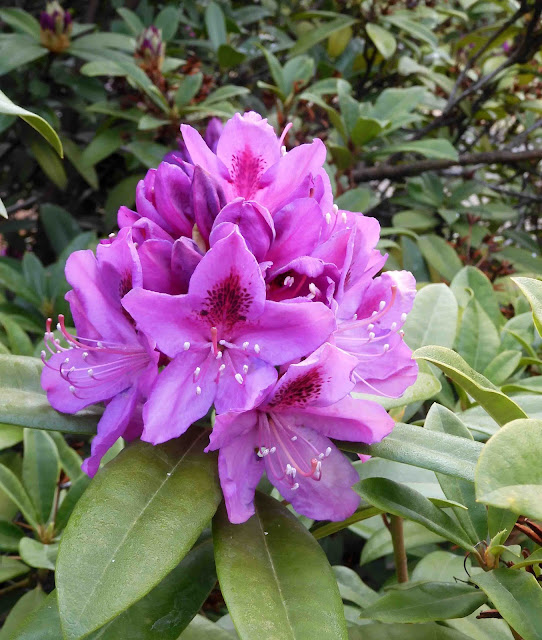 And here are the first flowers on the newly-planted blueberries. I doubt we'll get many blueberries, if any at all, but it's good to see the flowers. 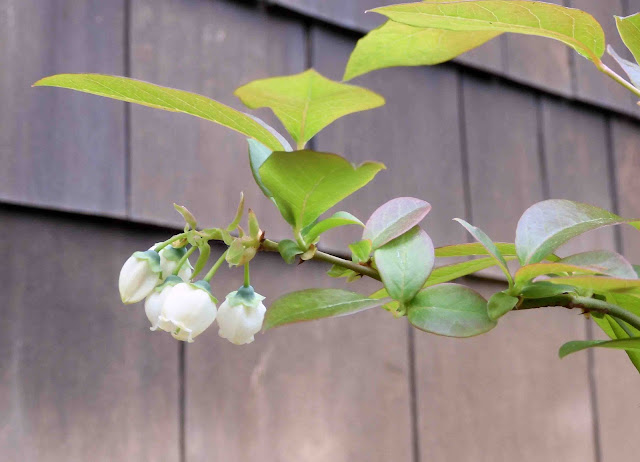 As for the rest of the day, I had PT after lunch. My therapist took range of motion measurements again yesterday, and I'm still improving in all areas. Only certain movements cause pain these days...reaching over my head or across my body, in particular. It's better every day.
I'd read on Facebook that my favorite local produce market had local strawberries. I decided to stop in and see if I could find some large ones. I hit the jackpot and bought four quarts. 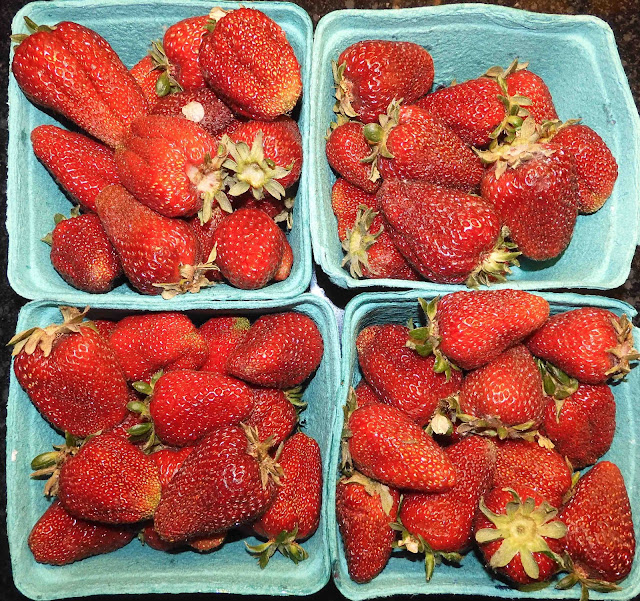 Mike can't have the strawberry seeds. I only buy the large ones and then cut the seedy sides off. These are a nice size. 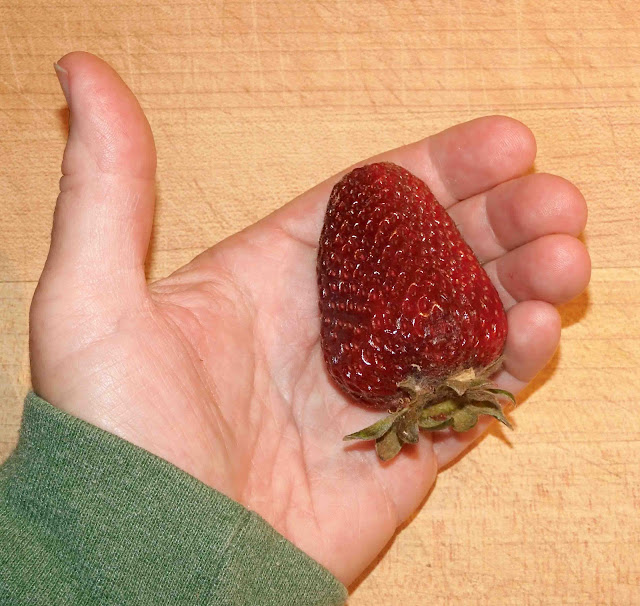 Today I'll start the process of making strawberry ice cream. It generally turns into a two-day effort. I'll make the custard and let it sit overnight so that it's nicely chilled when I put it in the ice cream machine to churn. By tomorrow, we should have some delicious homemade strawberry ice cream. As for those seedy sides, I'll use them to make some strawberry-infused vodka. I'll say more about that tomorrow.
There were four days set aside on the calendar for putting in the vegetable garden, and we had it finished in two. That means I have two relatively unscheduled days for sewing. Next up, I want to make up the 11th of 12 blocks for the Dancing Chickens and Flying Pigs quilt. It'll be my next hand-embroidery project, but I need to have the applique finished first.
And that's it from the Three Cats Ranch this morning. Time to get out and check on the flowers again.
Posted by Barbara at 6:51 AM

Instead of past, present and future, I'd prefer chocolate, vanilla, and strawberry. ~ Ashleigh Brilliant

Your freshly seeded garden looks so well organized and ready to sprout! You guys did an awesome job and I'm impressed how fast you both worked. I was thinking it would take several days to complete. Beautiful flowers and I appreciate you sharing the blueberry flowers. I've seen those when in British Columbia, but wasn't sure what they were. And I think your strawberries need a new name as they are so large. How about King Strawberries?

i was thinking about you and your bike accident today as I tripped on a sidewalk and broke my shoulder yesterday. Any advice or tips you can pass on would be appreciated. Love your garden pictures.

You have a nice sized garden plot there; you should get a bountiful crop from it all...
What gorgeous strawberries...and strawberry ice cream sounds amazing...
hugs, Julierose

It's amazing you have time to sew with all that garden fun. It must be absolutely gorgeous just to walk your yard! Such fun to see!

On face book I found a group called Winter Sown, and they collect seeds... like those strawberry seeds, and start them growing for the next season.