Yesterday afternoon, I returned for a PT appointment, after about a 10-day absence. We were at the beach, and then I rescheduled my Monday appointment for Wednesday, figuring accurately that the COVID vaccine would make me sick. It did, and so I was glad I'd changed my appointment. Anyway...it was a "re-evaluation" day, and so he took some measurements. Improvement was noted in all directions on my range of motion, but I still have a ways to go. I'm happy to say I'm making good progress, and my pain level has decreased to the point that I sometimes forget the whole unfortunate episode ever happened.

And all of that to say as I was leaving my appointment, I noticed this beautiful lilac in bloom. I love these dark ones. 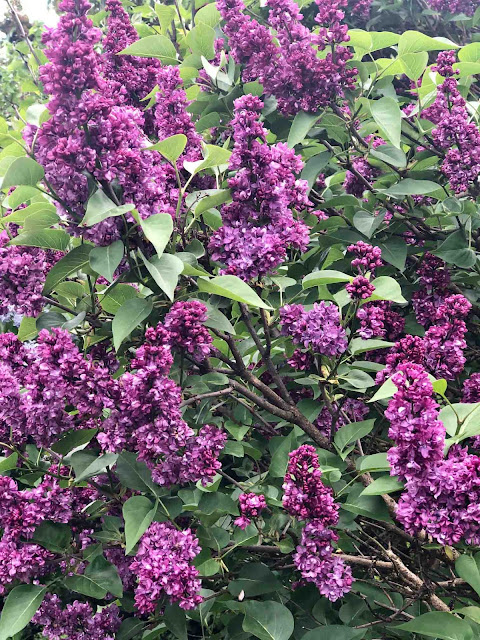 Back home, I needed to fill the birdfeeders, which gave me an excuse to walk around and see what's blooming at the Three Cats Ranch. A couple of the rhododendrons are starting to open. This one is usually first to the party. 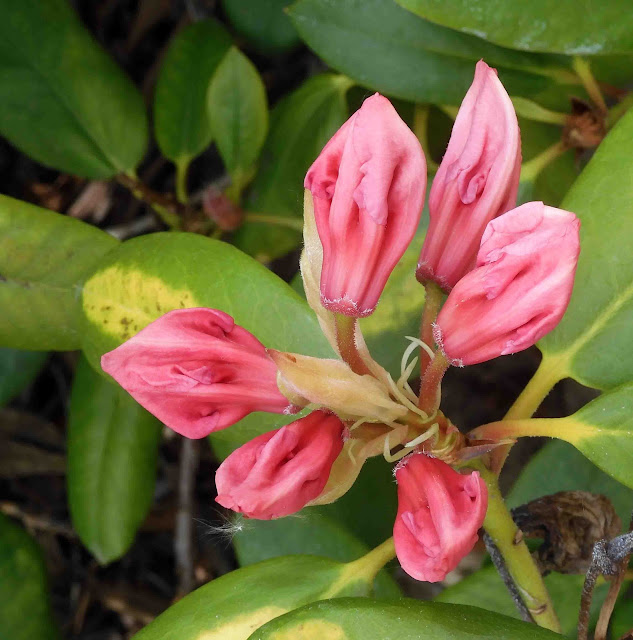 Down the sidewalk, and at the other end of the herb garden, this one is getting ready to open too. 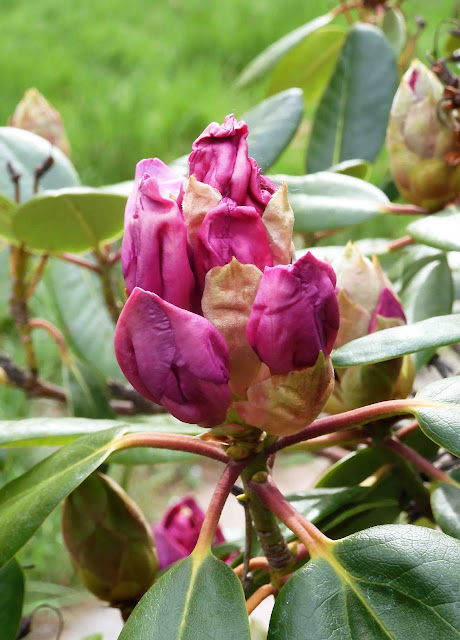 Also, I noticed a flower on the potted cyclamen. I was kind of surprised it came back this year, and so I'm happy to see it's going to bloom as well. The flower bud was at kind of a weird angle for its picture. Hopefully, the squirrels won't eat it. The past couple of years, they seem to have developed an appetite for the flowers, including my recently planted geraniums. Squirrels! (Daily fist shake.) 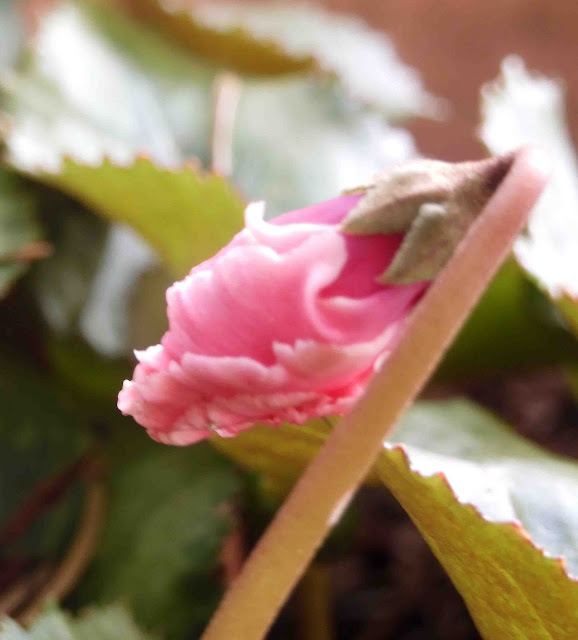 Also, I was happy to see one of the lily bulbs is coming back. I have four lily bulbs planted around the inside bend of a hairpin curve (did you get that?) in our sidewalk. I'm always surprised when they come back because they received nothing but neglect when they were still in pots. Mike gave them to me at various times. When the blooms were gone, the pots sat outside for months, completely ignored, until I planted them in the ground one by one over the years. They come up each year, and bloom away, then disappear. I keep a bamboo skewer next to each one so I know where they are when they're in hiding. 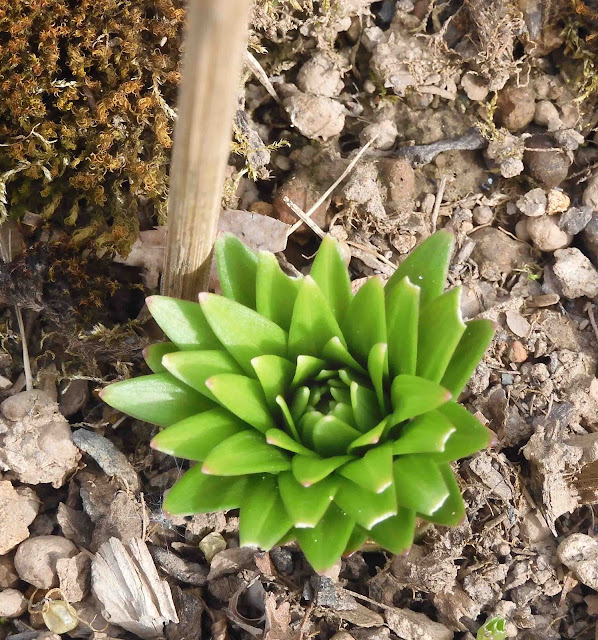 In other gardening news, my thanks go to friends Kathy and "Unknown" who gave me the hint to wrap my melon seeds in wet paper towels to sprout. So, I gave that a try, wrapping them in paper towels, and then putting the whole little package inside a covered casserole. I put the whole shebang in the bread proofing box along with the potted seeds. Less than 24 hours later, three had sprouted. You can see two on the left and one on the top in the image below. 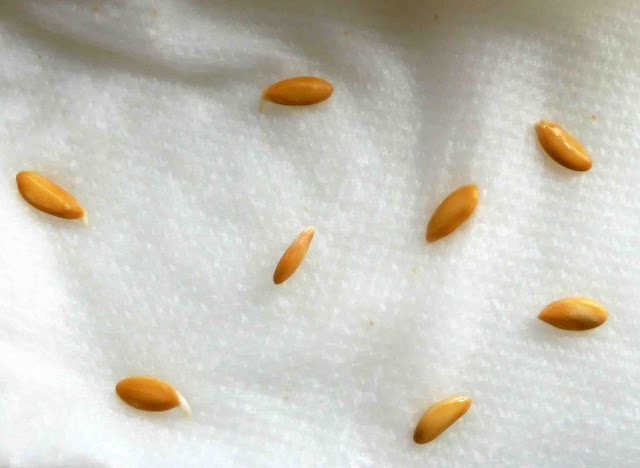 So, I plucked those three up and poked them into the potting soil. I left the rest. I'll let them sprout a little longer and then plant those too. There are still a few seeds left in the packet, but I'm more hopeful I'll get some cantaloupe for the garden. Fingers crossed I see some green shoots in the coming days.
In the sewing room, Sadie was Johnny-on-the-spot as my sewing helper yesterday. She has laid claim to the snowman quilt, and she's not letting that cat Smitty horn in on her territory. 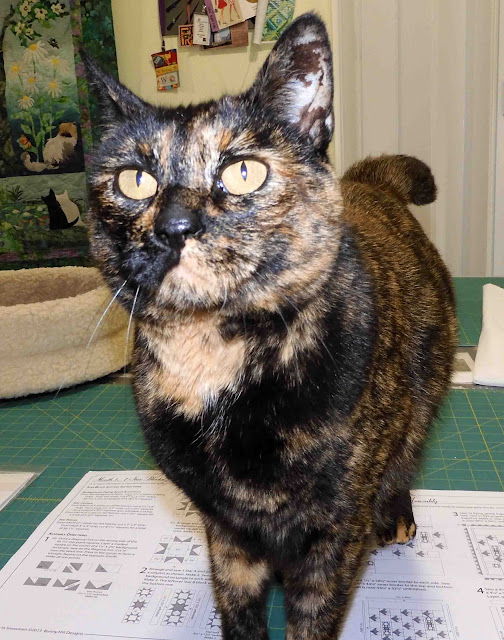 She helped me cut fabrics for the three borders. The narrow white is the first border, and the wider red and white is for the outer-most border. The rectangles and squares are for making 48 flying geese for the middle border. 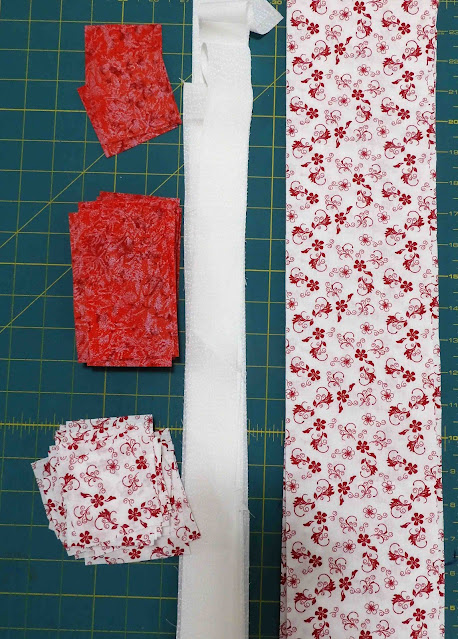 I was only just getting started on them when I needed to leave for PT yesterday afternoon. I left them just as you see them in the image below. 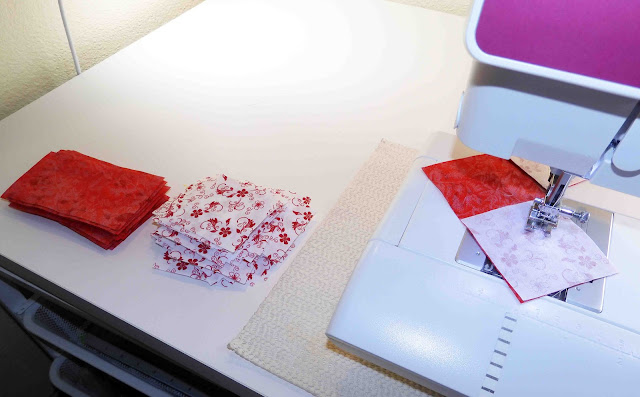 It might seem like a lot of tedium to make 48 flying geese blocks, and then sew them into borders. Just remember I made 96 friendship stars a couple of years ago, and so 48 flying geese sounds like a piece of cake in comparison.
Outside, Smitty was taking an afternoon bath on his catio. 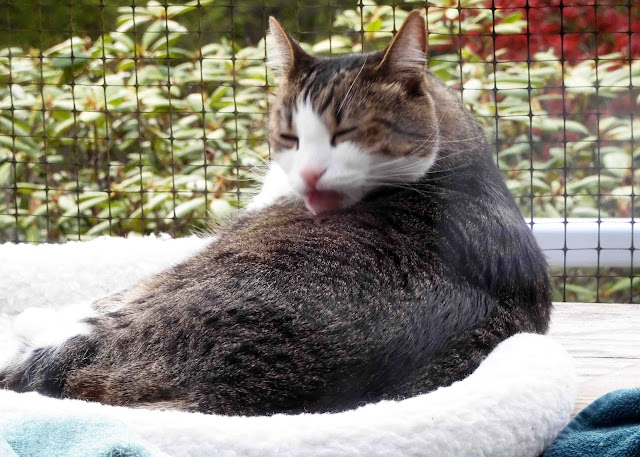 A little purrivacy, if you don't mind. 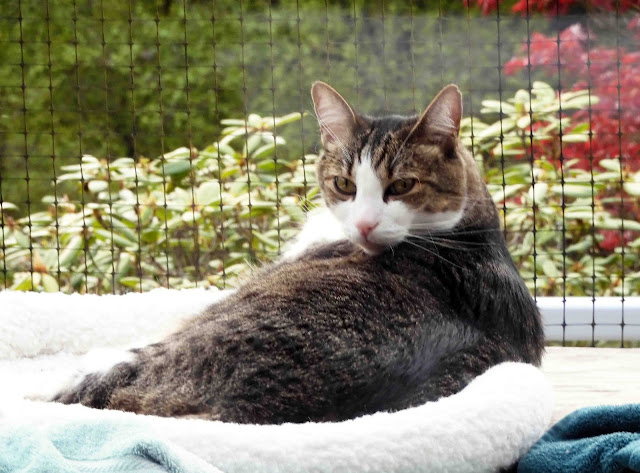 The only other sewing I did yesterday was to stich and stitch and stitch on Calendula Patterdrip's Cottage. Now I've moved my hoop again. The end is in sight for this one. 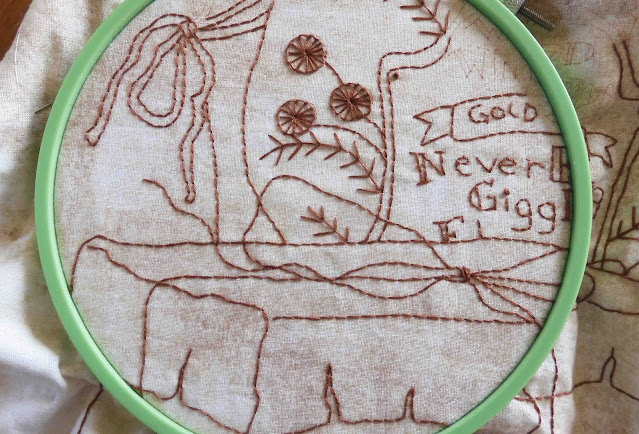 Doing so much stitching kind of made my thumb hurt, so I'll probably take a little break from this today. Mike and I are heading out to the grocery store...our favorite task of the week...not...and we'll stop first for our beloved Egg McMuffin on the way. It's a nice warm day for gardening, and so I'll probably get out and pull some weeds before heading into the sewing room to knock off those flying geese.
Posted by Barbara at 7:45 AM

Don't judge each day by the harvest you reap but by the seeds that you plant. ~ Robert Louis Stevenson

I'm happy to hear you are making great progress in PT. Very good sign you'll soon have a full recovery. Your flowers are amazing. So many gorgeous colors.

Neat that your seeds are sprouting using that method!! Lots of pretty flowers blooming for you, too.
Glad to hear that the PT assessment went so well. Hugs for a nice weekend Julierose

Glad to hear your shoulder is healing nicely - that's good news. And those wonderful dark coloured lilacs are my favourites too. I love their scent but I don't dare have them in the house anymore. However, I must admit if I were to come across a bush of them I'd still bury my nose and take a huge sniff (and sneeze the rest of the day).

Good news on the PT progress. Thanks for sharing the lovely photos of all your blooming things! The kitties are looking happy and content, too. Hope the grocery shopping goes well. I got mine done earlier this week, it wasn't fun, but it's done!

Glad to hear the PT is making good progress - important to keep up the home exercises. Oh, Lilacs and Lily of the Valley are my favs.


sorry to be unknown, but my old computer died, and I just can't find some of the old passwords. I found the book I used to garden with on Amazon. Your library may have it also. With the method I used, the seeds were allowed to form roots and first leaves, in a few days, so they sprouted the next day in the dirt. I'm housebound now, but I really enjoy living vicariously thru your adventures. Thanks so much for letting me tag along.
The name of the book is THE NEW SEED STARTER'S HANDBOOK.

I'm glad the damp paper towel method worked for you. I'm pretty sure it's something I picked up reading Organic Gardening magazine years ago and I've used it on stubborn sprouters a few times. Planted sprouts seem to be less enticing to squirrels and birds, too/

I'm still in love with Calendula Patterdrip's Cottage. Even the name makes me smile.