Mike and I had to run an errand in town yesterday morning. It was lunch time when we arrived home. After lunch, I spent a nice day in the sewing room. When we left, Sadie was basking in the morning sunshine. 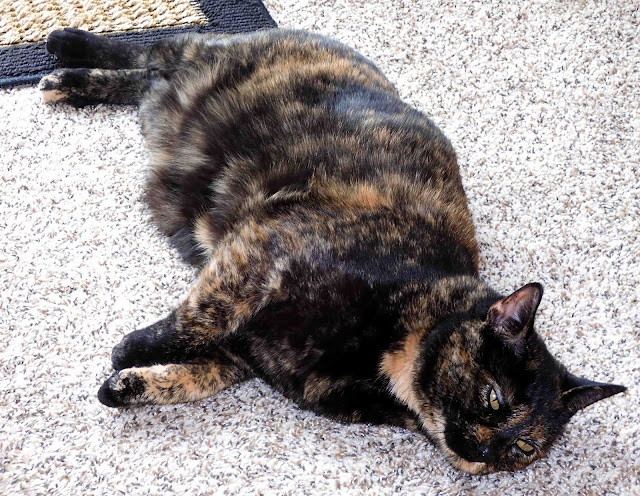 After lunch, I went straight to work sewing together the center section of the I Believe in Snowmen quilt top. I laid out all the blocks on the floor, and then considered the best strategy for sewing it together. You can see those little 3-star sections are staggered, and so sewing it row by row wasn't going to work. 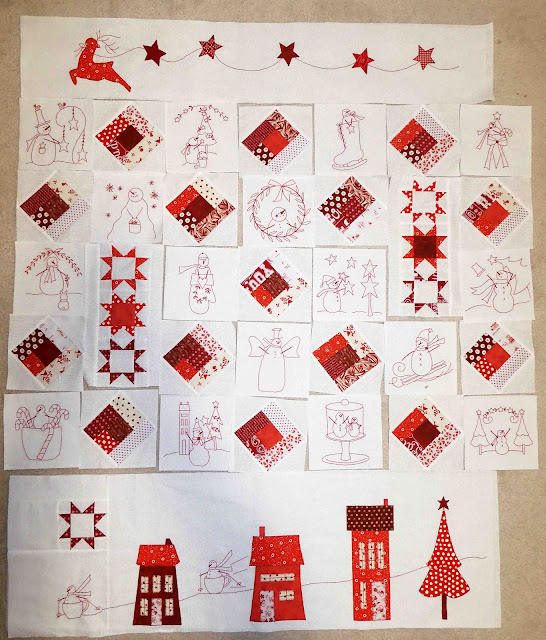 While I was considering my options, the kitties decided a different arrangement of blocks was in order. 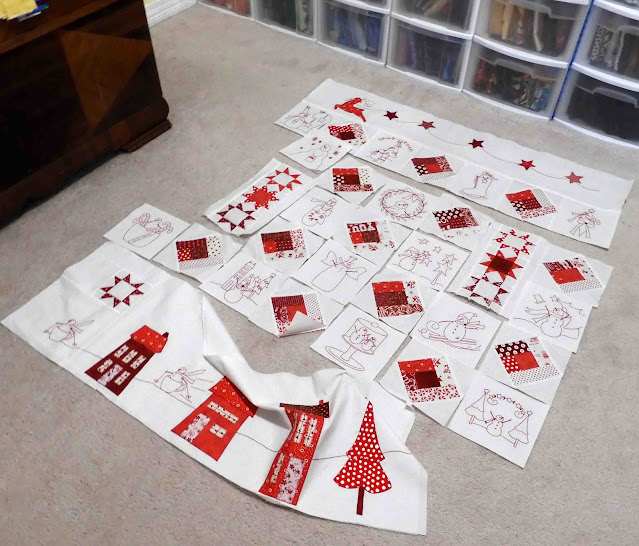 The center rows of blocks were sewn together vertically to make this all come together. As I worked on those vertical rows, Sadie staked her claim to the quilt top. 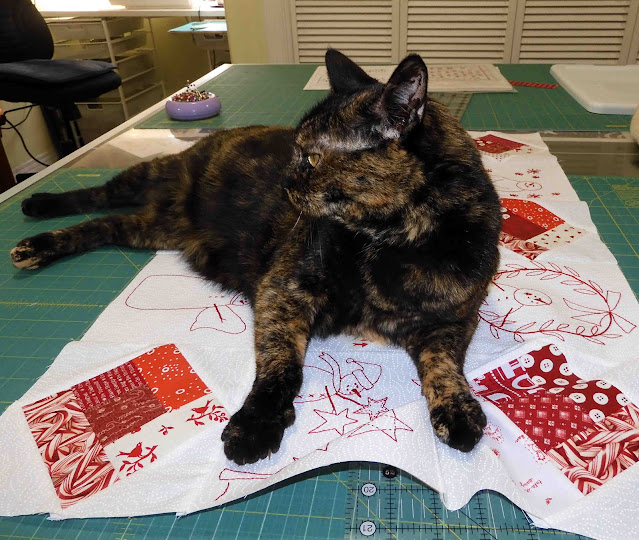 With her help and support, I had it finished by day's end. 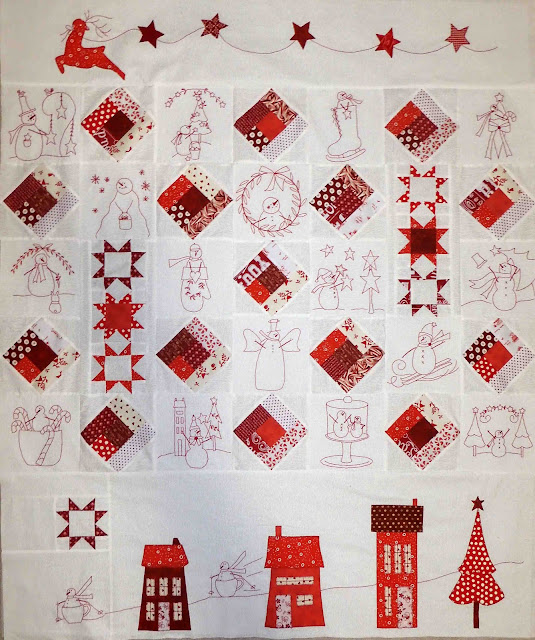 Now, it's still a long way from being "finished" finished. I still need to add three borders, and one of the borders is made up of flying geese. I still need to make all of those. I had to give my wrist a break from cutting and trimming. I don't know about you, but holding that ruler with my left hand always gives me a case of tendonitis. I've learned to pamper and baby my wrist through this process. Usually, I can keep it from becoming a full-blown inflammatory problem.
In other sewing news, I finished another hoopful of Calendula Patterdrip's Cottage. 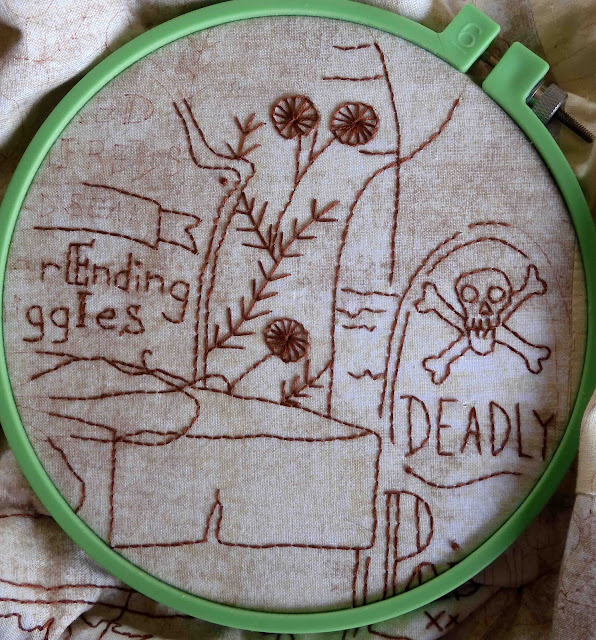 And let me just say, I'm ready to be finished with this large section, but it's probably still several more days before I can set it aside and move on to something different.
Last night for dinner, we tried another new recipe from our diet. This was so simple and good, I wanted to tell you about it. I'll say my version wasn't particularly photogenic, and so I'm swiping the image from the online recipe to tell you about these Sriracha Shrimp Rolls. 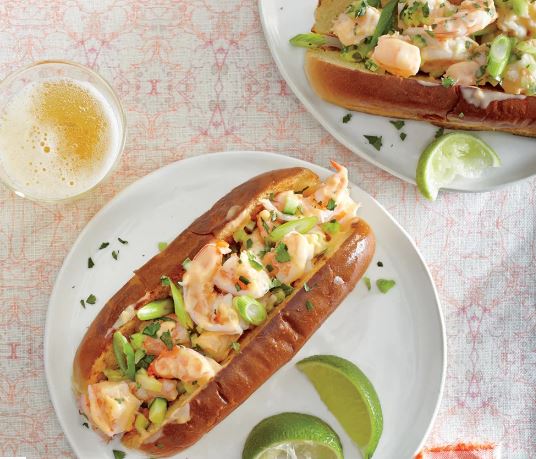 I've linked to the recipe back there. I made it just as written, but I had an open bag of precooked shrimp, and so I skipped the whole part of the recipe where I had to cook the shrimp. They're chopped up to make the "shrimp salad," and so you could even use those salad shrimp you see at the butcher counter. Using the precooked shrimp made it quick and simple. I used Hoagie rolls and toasted them in my toaster oven. It was delicious, and easy enough to do in the RV. I only made half the recipe for the two of us, but there's enough left for lunch today.
I'll get back to my sewing this morning, but I have PT this afternoon. It puts quite a crimp in my day, but my wrist will probably thank me for it.
Posted by Barbara at 7:42 AM

Cooking is one of the strongest ceremonies for life. When recipes are put together, the kitchen is a chemical laboratory involving air, fire, water and the earth. This is what gives value to humans and elevates their spiritual qualities. If you take a frozen box and stick it in the microwave, you become connected to the factory. ~ Laura Esquivel

I really like the new quilt - I love that it combines several different techniques. It would be pretty done in blue too (just sayin'). (ps - I can now see to comment again....yay!)

Good for you backing off a bit on the cutting--I wasn't so smart this last time!! And so, am having to rest up really well for 3-4 days at least.
I love how your Snow Peeps are coming together with those star blocks..so pretty and striking in the red/white combo.
Hugs from still chilly ;((( CT Julierose

That recipe looks like a good one, and easy. I need to remember to get shrimp on my next grocery run. Kitties are very opinionated about quilt layouts, aren't they? :-)

I think red blocks and cats are just like waving a cape in front of a bull!