Yesterday was one of the warmer days we've seen this spring. Mike and I had to do our grocery shopping first. We got there early and were home by 10:30 a.m. Another cup of coffee, and we were off to do our worst in the garden.

First, we were confronted by this rat bastard. I gave him (or her) an extra shake of my fist before we went to work doing other things. 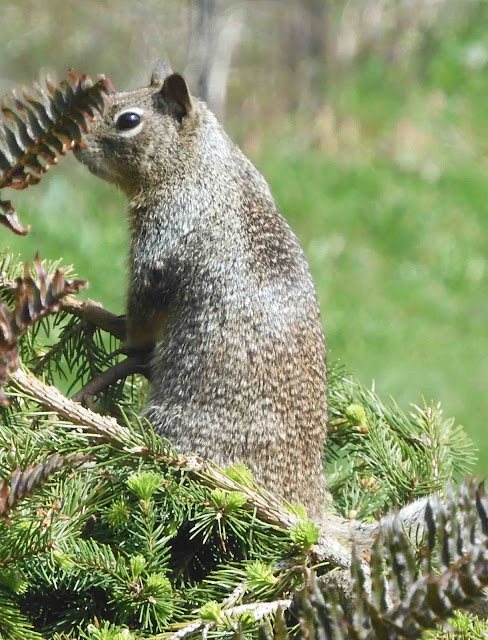 Our goal for the day was to weed and tame the culinary herb garden. This garden has been in the ground for around 15 years. Herbs come and go, but some stay forever...and become huge. Last year, I whacked back the sage plant to about 1/4 its previous size. This year, I heard a rumor that the three lavender plants had elected their own government, written their own Constitution, and were planning to stage a coup to take over the world. We had to launch a pre-emptory strike to quash their rebellion. Now they are all cut back to a more manageable size. They're not looking so menacing now, are they? 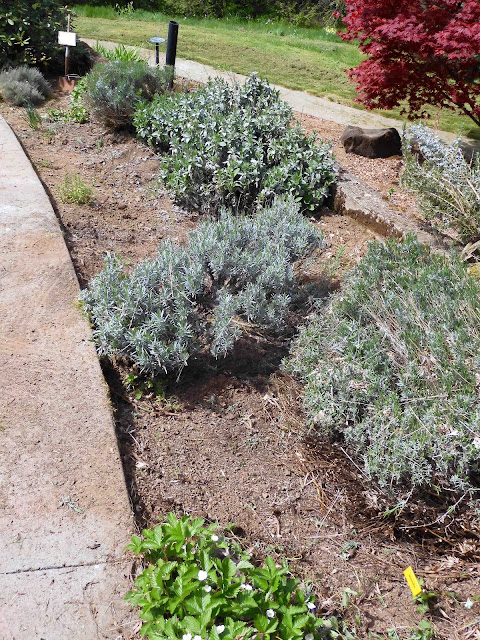 They were so large, they'd inundated all the chive plants. The chives have not recovered, although I hope they will by next year. Also, I have two little pots of chives to plant here in some of the open areas.
What you see here starting at the top of the picture is some thyme, and some sorrel (hiding behind one of the lavender plants), Some of the smaller things are chives, parsley, and oregano. In the middle is a huge sage plant. The two large plants toward the bottom of the image are two more lavender plants. Just poking in from the right side of the image is some rosemary. Most often the rosemary dies off in the winter, and I have to replant it. This one has been going strong for several years.
Mike helped with the whacking. I did the weeding, and the culinary herb garden looks a whole lot better now than it did in its "before" picture. And, frankly, it was such a mess I was too embarrassed to take a "before" picture. It wasn't an unpleasant job. The lavender was fragrant to cut, even without any flowers. And I was weeding out the invasive mint...also very fragrant as I pulled it up.
We were both pretty tired (and hot) by then. I went back inside, took a shower, and then spent the rest of the afternoon sewing together the 48 flying geese blocks. Today I'll get busy sewing them together to make the middle border for I Believe in Snowmen. When I have that finished, I can sew all three borders to the quilt, and I'll have myself a finished quilt top. 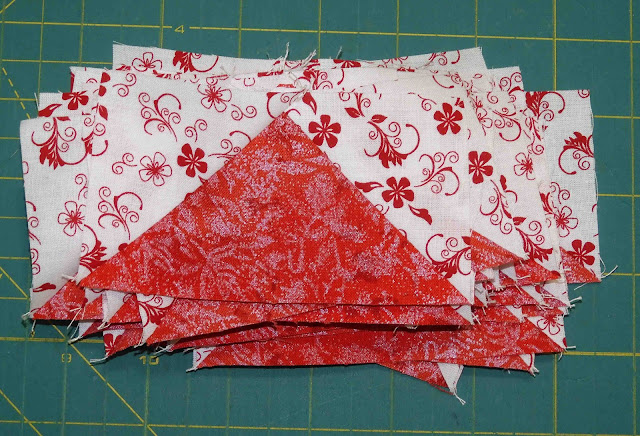 With all those cut-off corners, I'm making good progress on the next quilt in my "trashy" series. 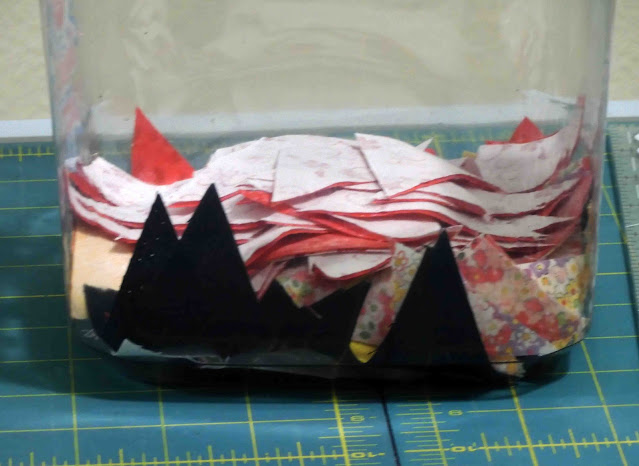 It was getting too late in the day to start anything else, and so I went back outside and took a picture of some of the blooming things. These yellow tulips are the final tulips for this year. They share a whiskey barrel with the mint. I've been worried the mint didn't survive the ice storm, but it's starting to come back now. 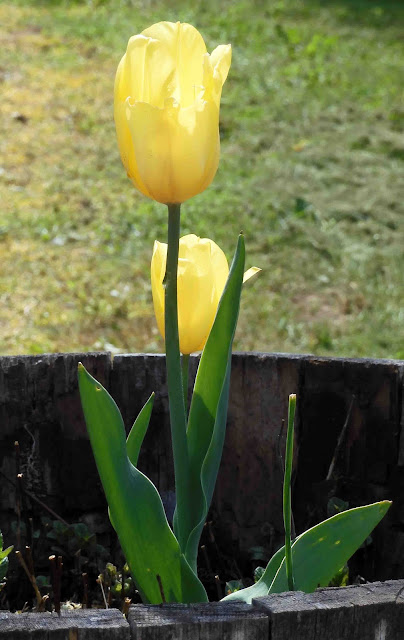 One of the rhodies is opening. It should be covered in flowers sometime within the next week. 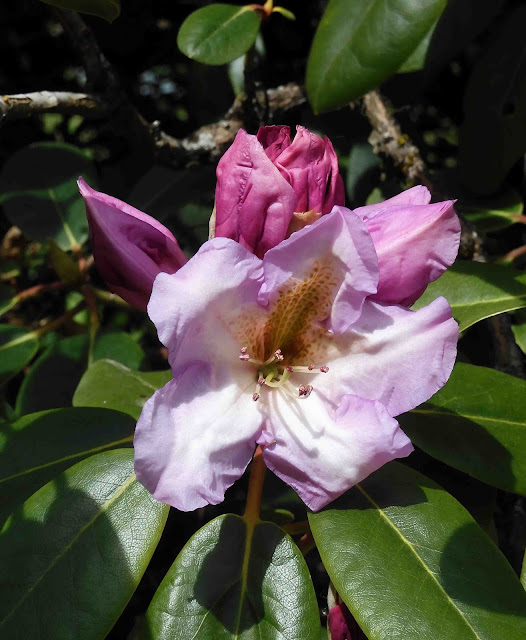 Same goes for the azaleas. 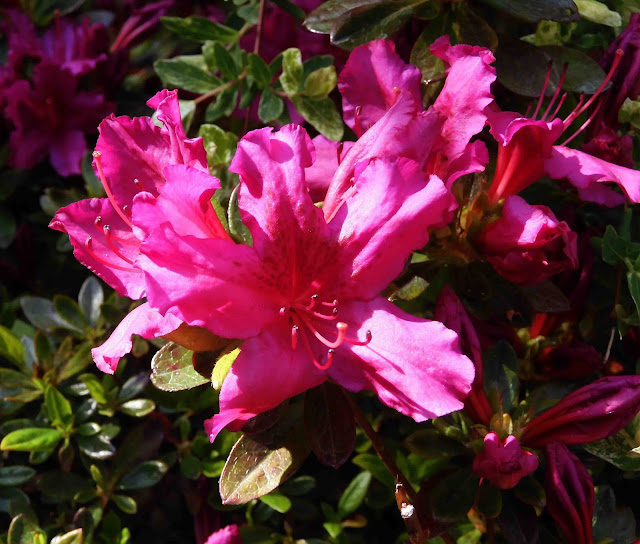 The Andromeda is beautiful right now. Often, I marvel at how one plant can put on such a show. 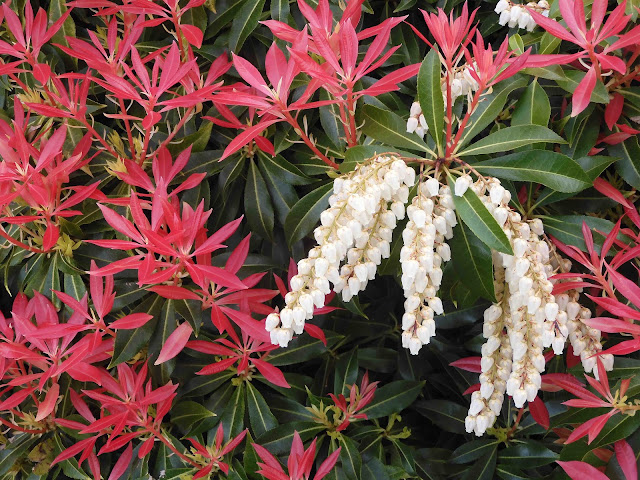 Here's the whole bush. Mike has been trimming the top off once it finishes its spring bloom. I believe it's actually enjoying the process. 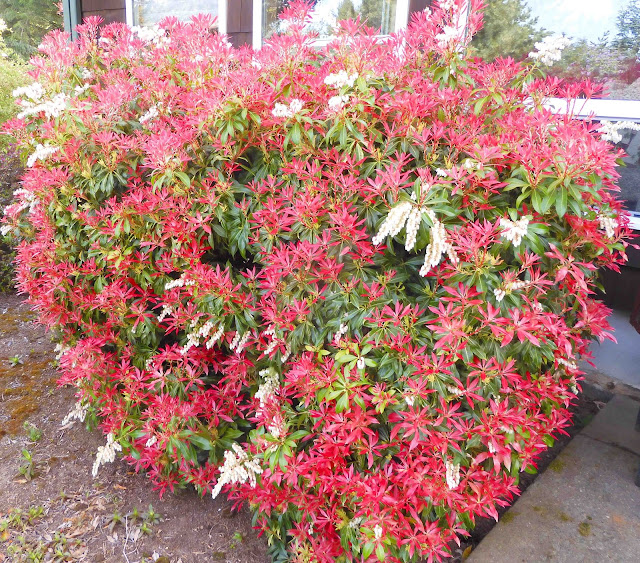 Finally, I know y'all are waiting on tenterhooks wondering what happened with the little melon sprouts. Three have broken the surface of the soil. I'm only showing one here since it was the easiest to see. It occurs to me that I should take them out of the proofing box now and put them under the grow light. There are a couple more seeds still wrapped in wet paper towels. I expect those have germinated by now too. 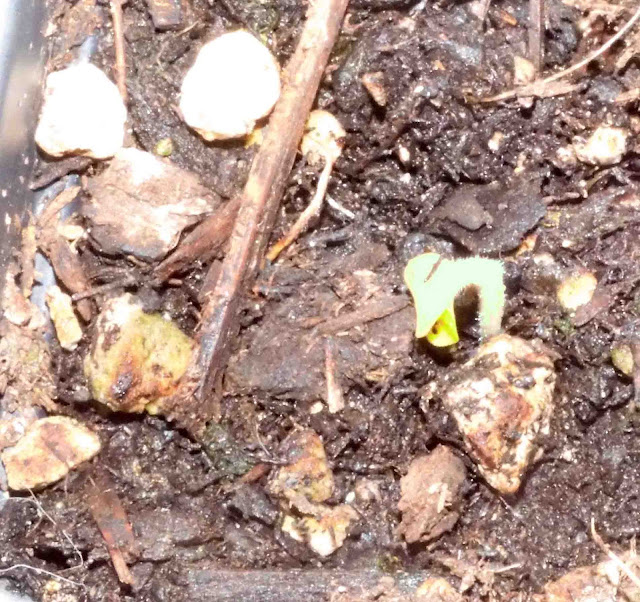 Tomorrow's post will be The Endeavourers reveal for the "Color Theory" challenge. Here's one of the peeks I gave you as I was making it. 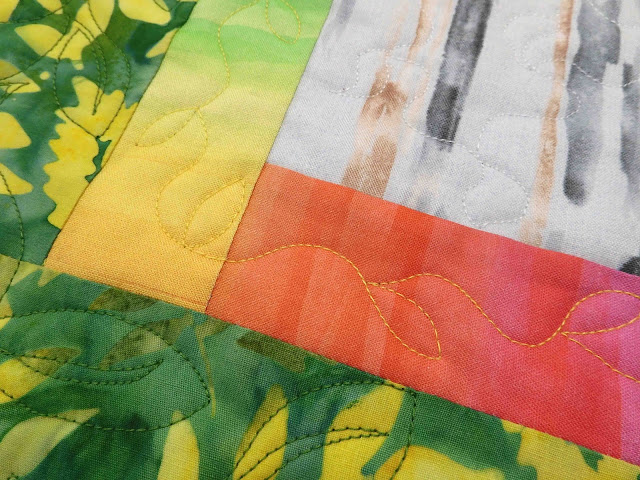 Tomorrow, you'll see the whole thing, and read about the process of making it. There's a story behind it.
It's cloudy and cool again today. I expect to spend the day in the sewing room, but I have some housekeeping to do too. I skipped my slow-stitching yesterday to give my thumb a rest. Today I'll get back to that as well. Spending the day fast and slow stitching seems like a great way to spend a Friday.
Posted by Barbara at 7:55 AM

The garden suggests there might be a place where we can meet nature halfway. ~ Michael Pollan

Nice work cleaning up the herb garden area--it is really so wonderful to get the benefit of those scented plants while working!!
I am sore still--so I just wound some bobbins today and did a bit of applique--now to rest--AGAIN!! Quite windy here and gray...
hope your weekend sees you feeling more pain free...hugs, Julierose

So nice to see more spring flowering shrubs yesterday and today. We're back to windy and the 40's today, so no outdoor work. I need to get myself motivated to so sew. I didn't think anything could kill chives or mint, not even the deer or rabbits. I woke up too early this morning, I think I need a nap.
Pat

I think you and Mike have been feeding your pet squirrel too much yummy food. Looks like he is putting on a lot of weight. Probably has high blood pressure and going into early stages of diabetes. He may rally the PETA to make you pay his Vet bills. LOL! Fun post and your garden looks lovely. I'm glad you knocked down the emerging government!

ah, the dreaded grocery shopping - how we hates it. However - I have discovered the joys of curbside pick up via online ordering. What a joy! I don't have to get up at dark thirty in the morning and battle the masses any longer. A nice person brings our groceries to the car, loads it all inside, and off we go. I hope that service extends long past the end of covid!! I have never seen an andromeda plant before - it's spectacular!

Your Andromeda is gorgeous. I miss them as we had a large one in Oregon and always looked forward to their blooms. Have yet to see any here, probably too cold. Snowing here tonight after yesterday's floods. What's left for tomorrow she wonders.

Love the catio, the blooming things you have already and the way you are trying to sprout things. I’m wondering if the wet paper towels would work with flowers seeds to give them a head start. Love reading about your day and glad you are vaccinated too.

I would imagine working on that culinary garden was a bit of work, given the size of the lavender even after you're finished. At least you had some good fragrance to enjoy. It looks great! I have my challenge piece posted on the member site, but will do my post on my blog this Monday.

Nice day! You made all happen and can check off many boxes regarding life’s errands. You even had time for your pleasure. Today should be my last day doing taxes. Then I will let it rest a day or so before sending it in. We will see if that plan holds.

Fresh herbs in cooking is a way to elevate ones cooking. There is such a difference between fresh and dried. I do try to keep my most used herbs growing.

A couple years ago, pre-covid, I was visiting my brother in the Pacific NW We drove up to the La Conner, WA area but the season wasn't right to see the huge tulip fields in boom so we stopped at one of the nice nurseries there and oohed and awed over the plants. I found a rosemary labeled for cold tolerance down to a low I was sure would survive here in NE Central Oregon. It is doing beautifully here, I am so happy to report. Love your andromeda. My sis has had some of that beauty in her yard. I will have to check to see if it is drought tolerant. If so I may have to get one!