Last Leg of the Journey

It was another day of driving and worrisome weather. All's well that ends well, though, and we made it into Bend, Oregon, with no problems at all. Before we left, Smitty was snuggled up in a quilt. It was cold outside, even if it was warm inside. 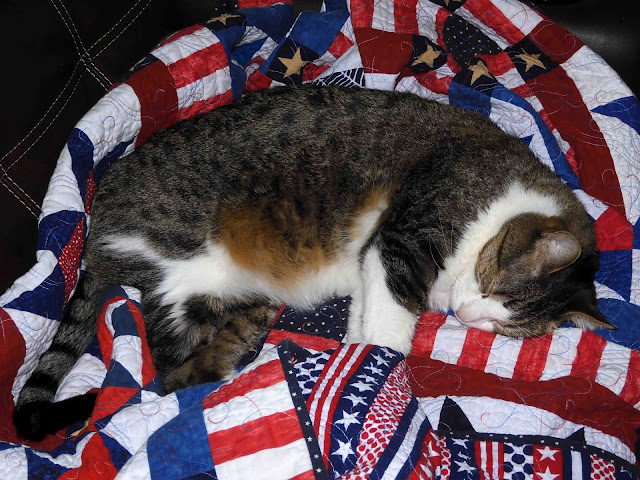 It snowed during the night, and the little quilt in their catio was wet from it. We threw it in the dryer and when it came out all warm and fluffy, we covered him up with it. Ahhhhhhhhhh. 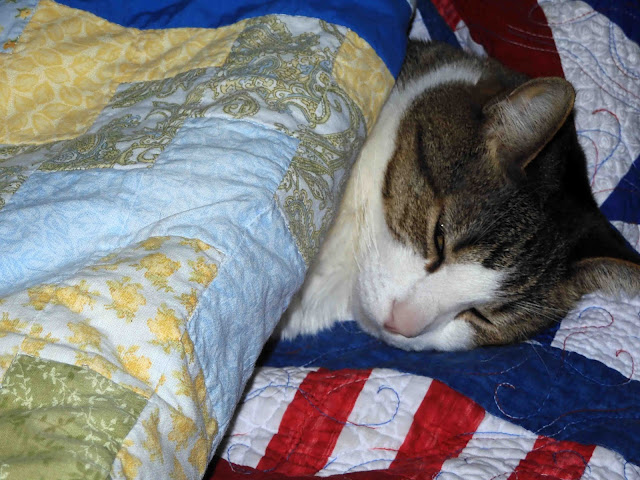 There was about an inch of accumulation as we left the campground. When we reached the main road it was clear, but we were still a little worried about what we might find down the road. 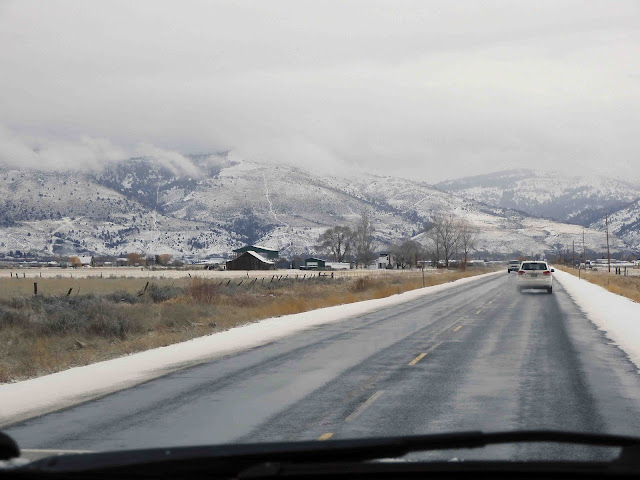 We were heading out into what's known unofficially as the Oregon Outback. We saw a few barns at the beginning of our journey. 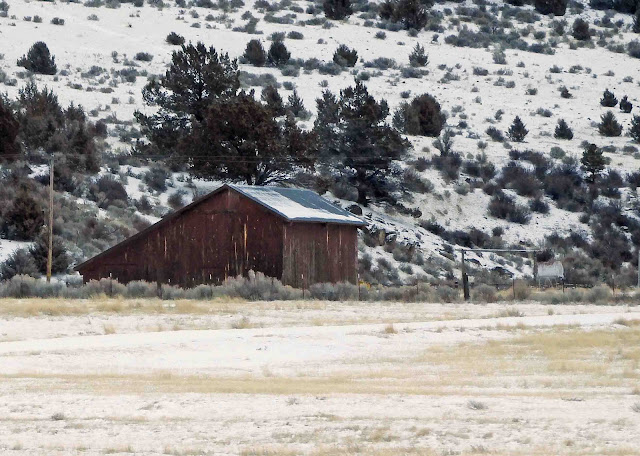 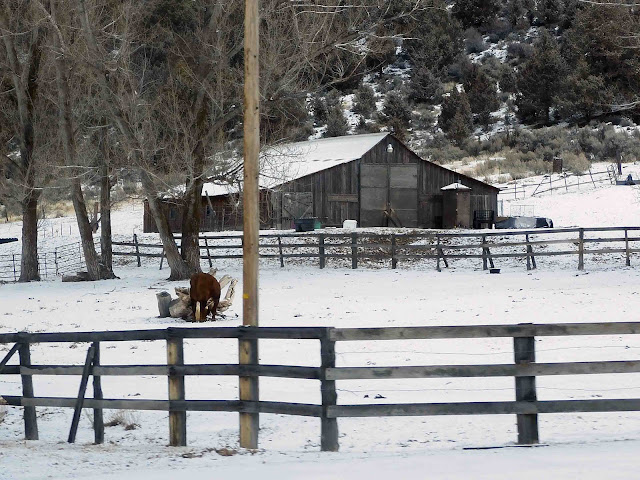 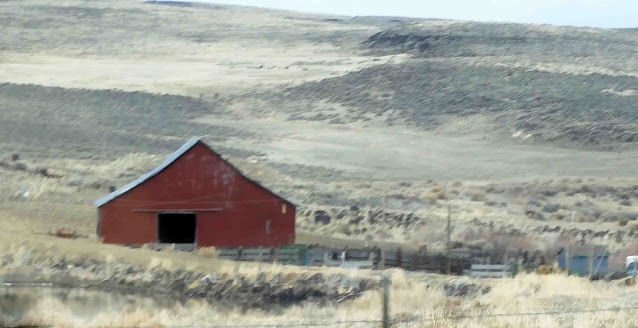 I realized we were traveling the Oregon Outback Scenic Byway and so I pulled out my scenic byways book to see what I could find out. This is a road we've never traveled before, and so it was interesting to learn we were traveling alongside the Abert Rim. 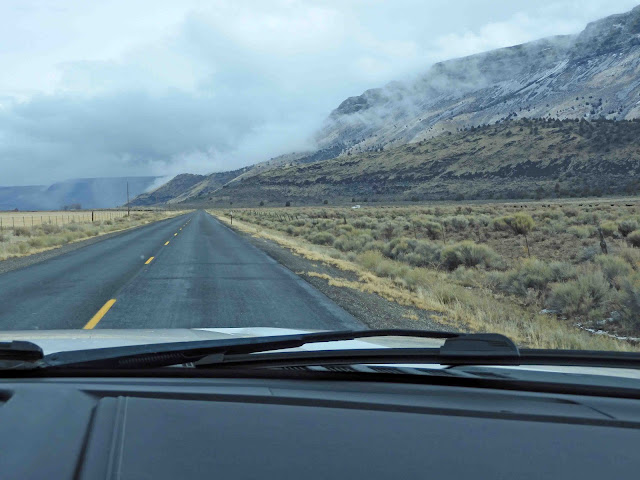 Wikipedia tells us that the Abert Rim

is one of the highest fault scarps in the United States. It rises 2,490 feet (760 m) above the valley floor, finishing with an 820-foot (250 m) sheer-sided basalt cap. It was formed during the Miocene epoch. At that time basaltic flood lavas covered much of eastern Oregon. In subsequent faulting, great blocks were tilted and Abert Rim is at the western end of one of these blocks, while Lake Abert lies on top of another. Stretching more than 30 miles (48 km) from Lakeview north to Alkali Lake, Abert Rim is also the longest exposed fault scarp in North America.

Cool! You know I love this stuff. It stretched on beyond us for many miles. 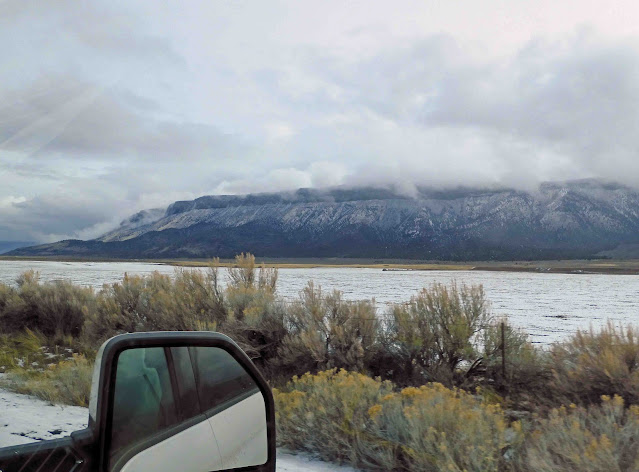 On cue, Abert Lake came into view. It was immense. No way I could capture it in a single image, and so I'll show you a series of images. 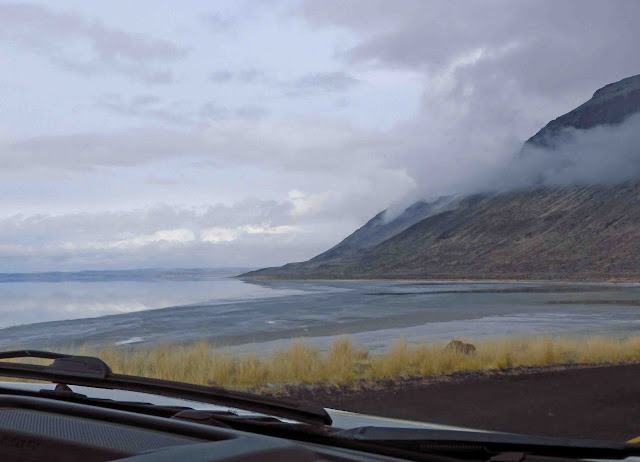 I was wishing I could have gotten this from a different angle, but the colors of the landscape reflecting in the water were interesting. 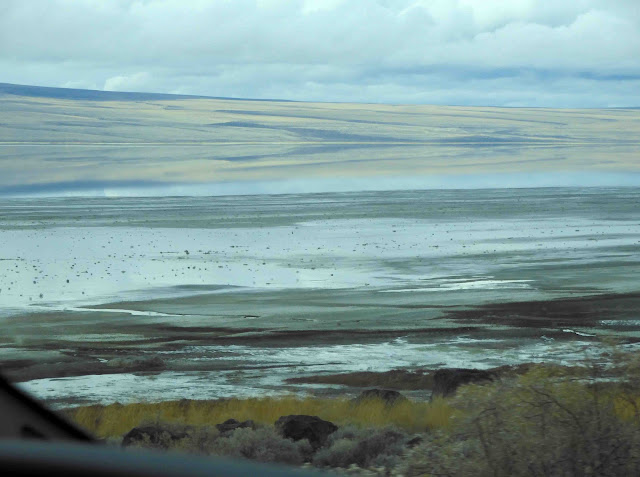 It too went on for miles as we drove by. Wikipedia tells us that Abert Lake

is a large, shallow, alkali lake in Lake County, Oregon, United States. It is approximately 15 miles (24 km) long and 7 miles (11 km) wide at its widest point. It is located 3 miles (4.8 km) northeast of the small, unincorporated community of Valley Falls, Oregon. The lake was named in honor of Colonel John James Abert by explorer John C. Fremont during his 1843 expedition into Central Oregon. No fish live in the alkaline waters of the lake; however, its dense population of brine shrimp supports a variety of shorebirds. The lake is also an important stop on the bird migration route known as the Pacific flyway. 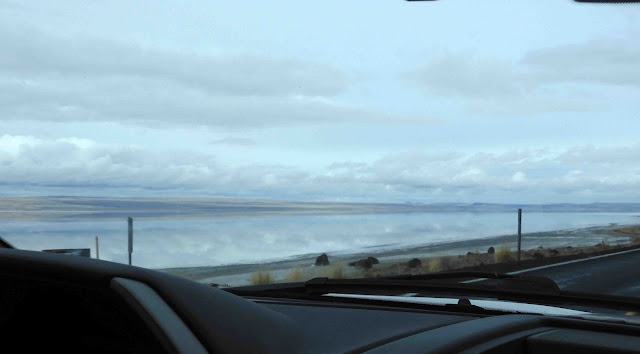 Just up the road was another huge lake called Alkali Lake, but it wasn't as interesting photography-wise. From there, it was just a long, long road through the uninhabited landscape. 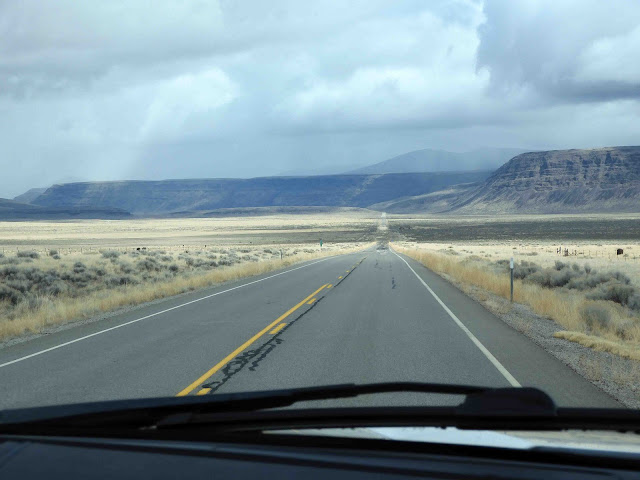 We saw a lot of what you see below, stretching out for many miles in all directions. 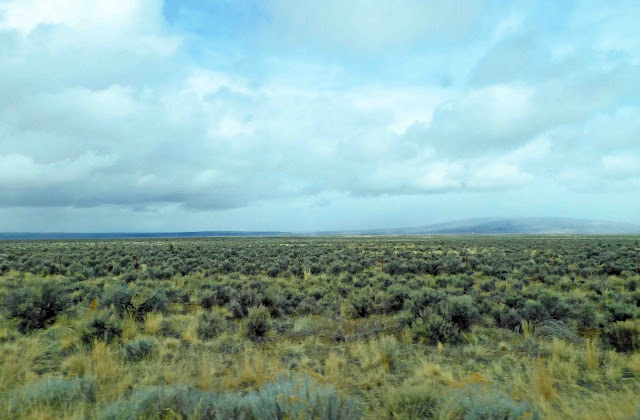 Eventually, we rounded a bend, and the Cascade mountain range came into view. The area approaching Bend and Sisters is breath-taking. 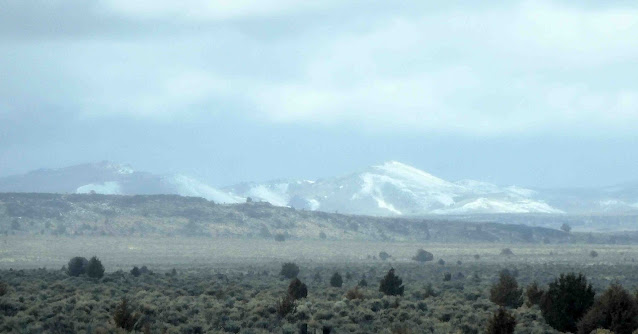 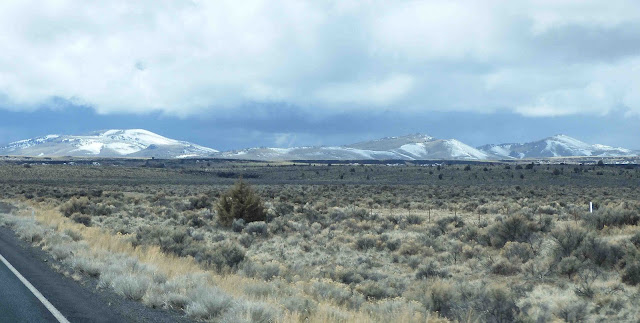 As we approached Bend, it looked like this. We were happy for the clear roads and for no snow on the ground. 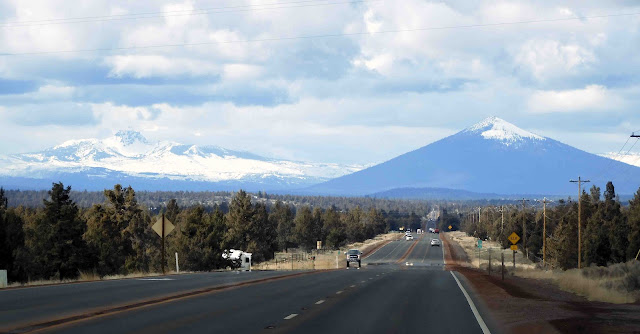 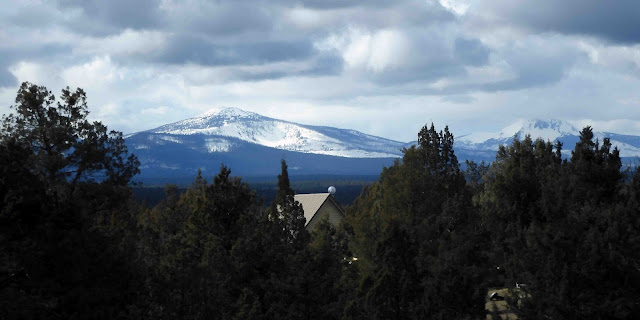 So we spent the night in an RV park just outside of Sisters, Oregon. It's a very nice park, and it was warm enough to be out with just a light jacket. It was kind of nice to roll in a little earlier in the day.

I spent some time with my slow-stitching. I've filled enough of this portion, and so I decided to move my hoop to the bottom of the piece. 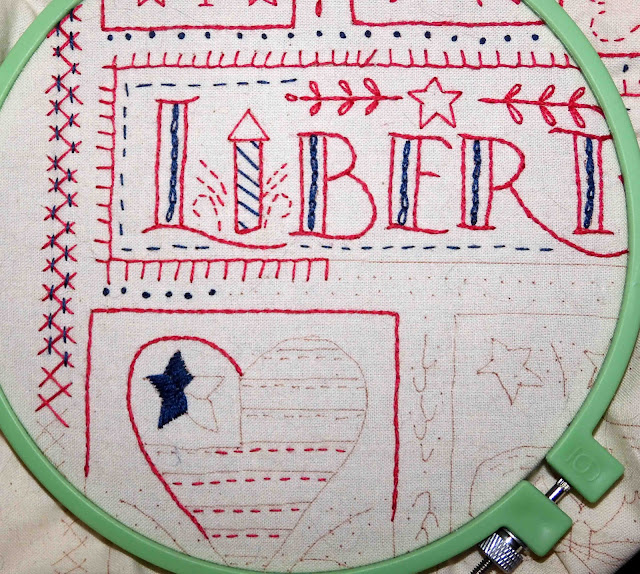 Now, I'm at the bottom, and I expect I'll have the embroidery finished within the next few days. 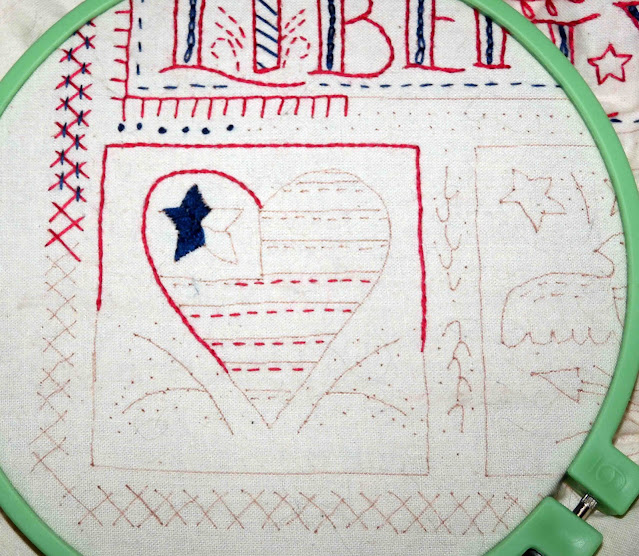 The kitties are chomping at the bit to get home, as you can plainly see. They've had to work hard keeping us awake at night this trip. Sadie has given all her toys extra attention, and we often hear her chattering with them in the middle of the night. 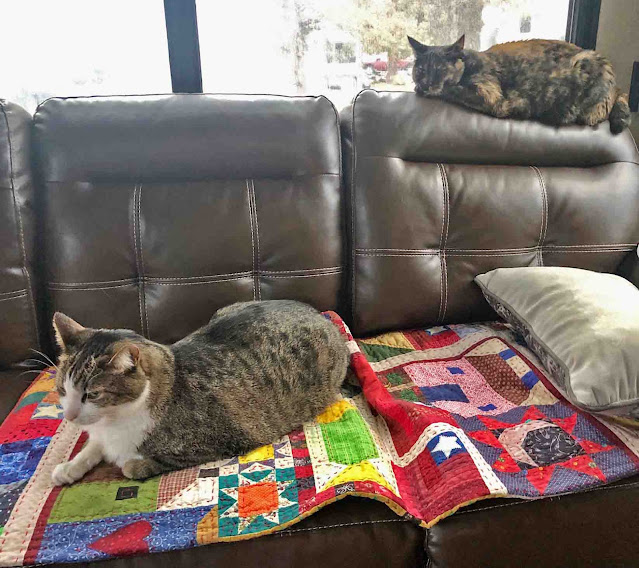 We thought we might have to avoid the Santiam Pass over the mountains, which would have added several hours and many miles to our trip. As it turns out, traffic cams show the pass clear, and so we should be home in early afternoon. I'm hoping, hoping, hoping I haven't miss the bloom of the crocus. We're told there's significant damage to our trees, and those crocus blossoms will certainly offset the shock of all the limbs we're expecting to find on the ground.

Next time I write, I'll be sitting at my desk. Until then...happy trails. I hope you've enjoyed the trip.

I have two homes, like someone who leaves their hometown and/or parents and then establishes a life elsewhere. They might say that they're going home when they return to see old friends or parents, but then they go home as well when they go to where they live now. ~ Aleksandar Hemon

I love the pictures! Yet another must visit! I love "traveling" along with you, your hubby, and the kitties!

What beauty you were able to see on this leg of your adventure. But all that snow on the ground even turned my knuckles white. Stay safe and I hope that when you return you'll be delighted with the bloom of your crocus and the tree damage will not be as bad as you might be expecting. But boo hoo, just the same. I hate to see trees get damaged during bad weather.

You've had a grand adventure and I enjoyed all the photos along the way..;)))
but there is no place like home--especially after a long trip...enjoy hugs, Julierose

Another wonderful trip away, but there is no place like home!

Love how snuggly the kitties are - they seem to enjoy the trips as much as you. BUT home probably looks to all. You are timing your 'get out of dodge' perfect this year - left Oregon before it got bad and left the Arizona and Nevada before this big loopy mega snowstorm moves in.

Oregon has such cool geology. We've been to Bend. Many, many years ago now and visited the lava caves. That was really cool. Hope your drive home was uneventful and the damage at home isn't too bad.

Your trips are always a joyful ride. Glad you all made it home safely.

Well, I know you made it home safe and sound. I'm sure the kitties are delighted. Sorry to hear about the damage to the trees.

Thanks for taking us along as virtual armchair travelers. The sights have been amazing. I've posted two photos of my crocus on IG in case yours are already gone.
Pat

I'm sure when the kitties get home they will be so happy to RUN and move, and explore their space again! MOM! You've kept us cooped up too long!