Happy to be Home

Our drive yesterday ended up being shorter than expected. We'd worried about getting over the mountain passes. We had the option of driving north to the Columbia Gorge where we could get around the mountains, or we could drive over the mountains via the Santiam Pass. We checked traffic cams over the most worrisome passes, and the roads looked clear. Snow had fallen a few inches overnight in Bend, and that had us a little worried, but we figured it was worth the risk to shorten our trip by almost half.

Before heading out from the RV park, this tree outside our window caught my eye. I don't know what it is without being able to see its leaves, but the red berries were interesting. They were about the size of peas. 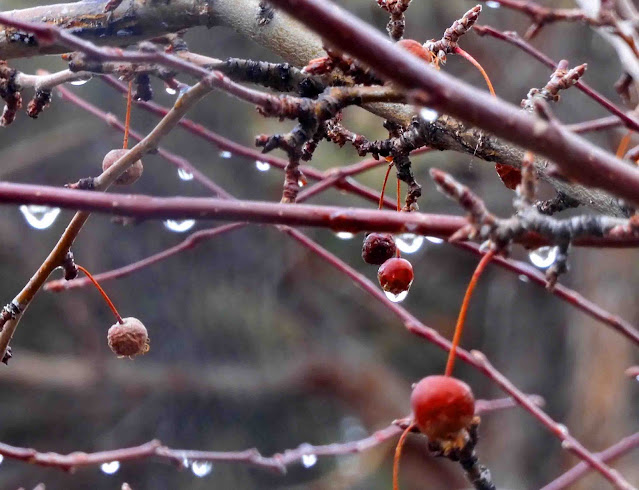 We got diesel in Sisters, and drove past the Stitchin' Post quilt shop. It was tempting to stop, but honestly, I don't need a thing, and I've been there many times. Home sounded better than fabric at that moment.

So much snow in the mountains was a little worrisome. 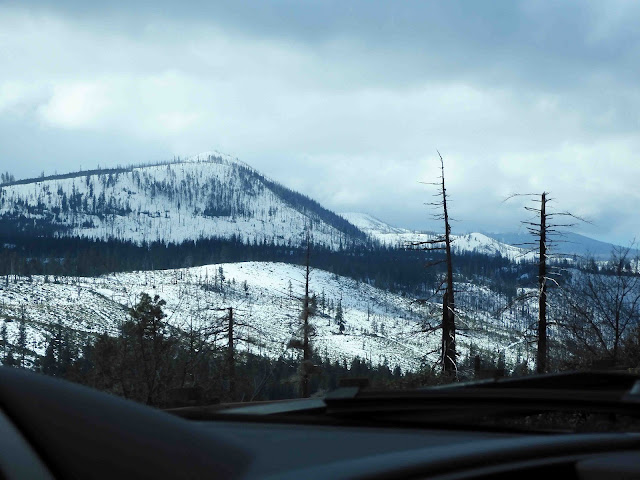 Fortunately, when we reached the Santiam Pass, the roads were clear. 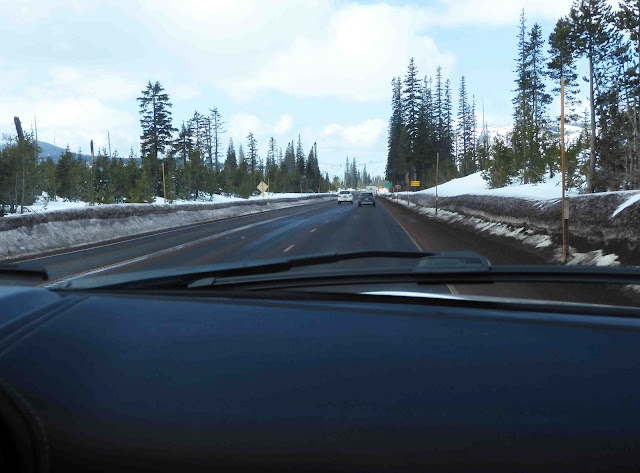 With the most worrisome part of the trip behind us, we could just focus on the miles ahead of us. It was quite a different landscape from the day before. 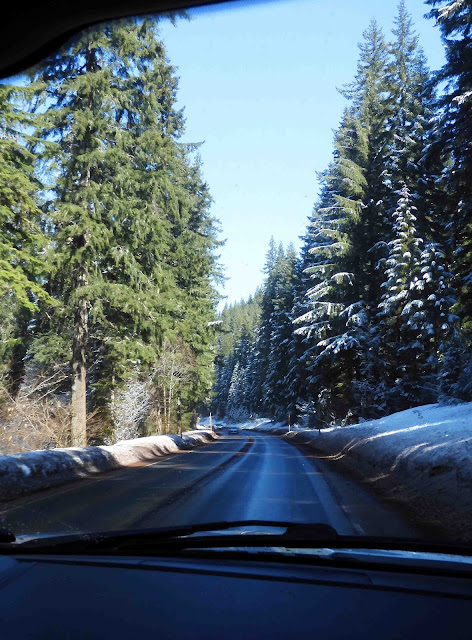 Sadly, this area was decimated by wildfires last summer. We drove through miles and miles of burned up trees, burned up equipment, and homes and businesses burned to the ground. Only their brick and stone chimneys were left. 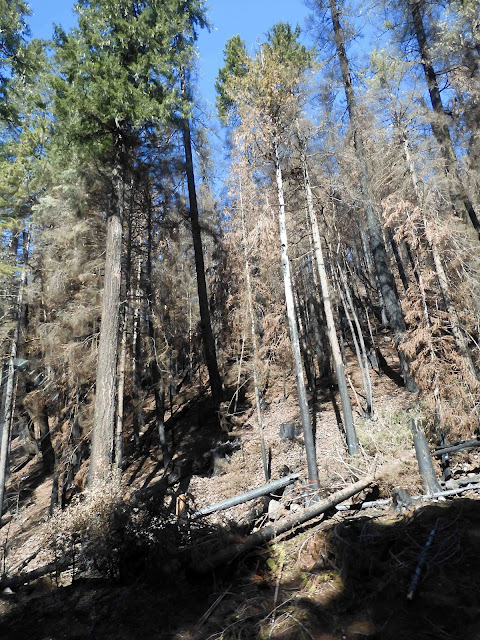 Twice we found lane closures and followed lines of cars behind a pilot truck to get through. They were salvaging what timber they could, and cleaning up the rest. 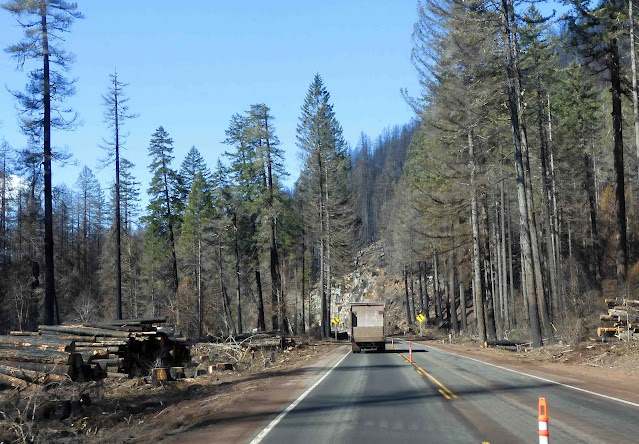 They seemed to be cutting the trees most vulnerable to falling across the road, but some were left, despite their trunks being blackened. Those white streaks in the image below are reflections from my window. 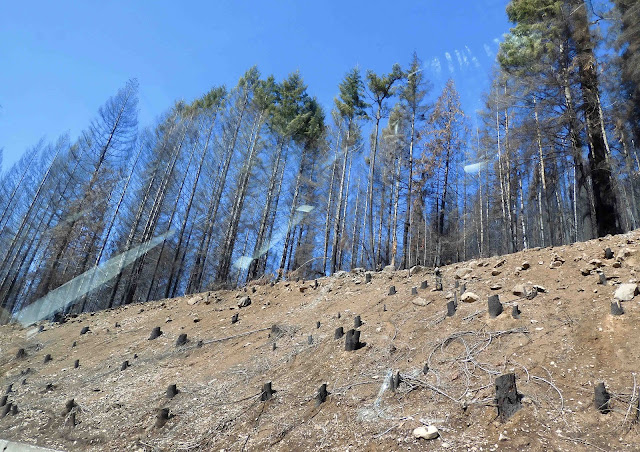 Once out of the forest and closer to home, we started seeing trees damaged by the ice storm last month. Sad to see. 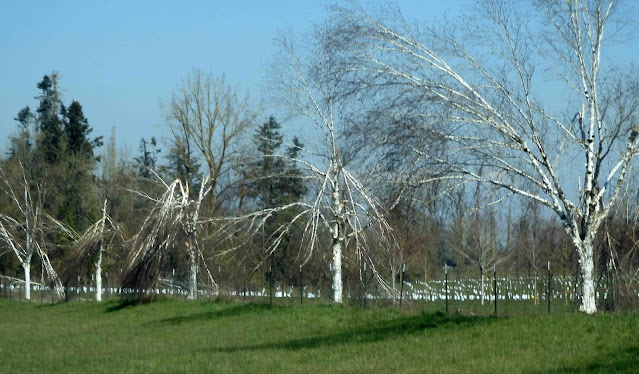 As we turned off I-5, we could see our hill off in the distance. 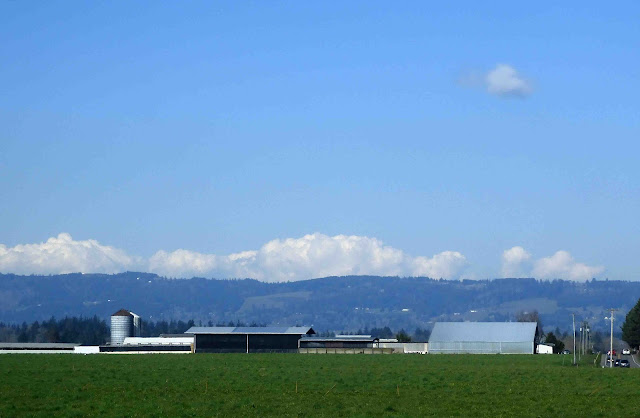 Once we were parked, we opened the doors and set free the cats!!! 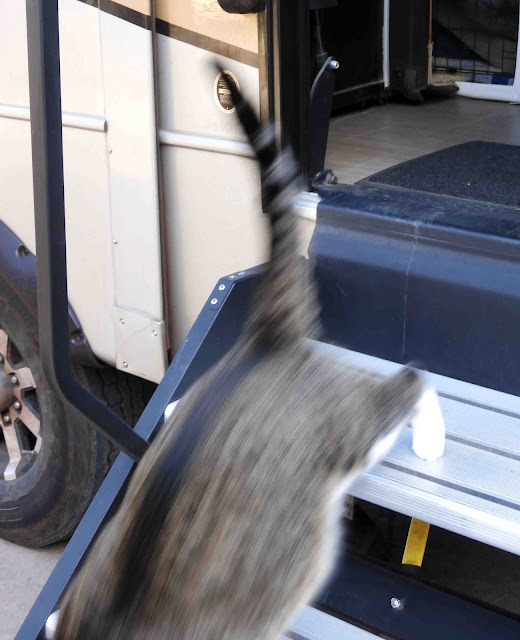 There's a reason for that blur. 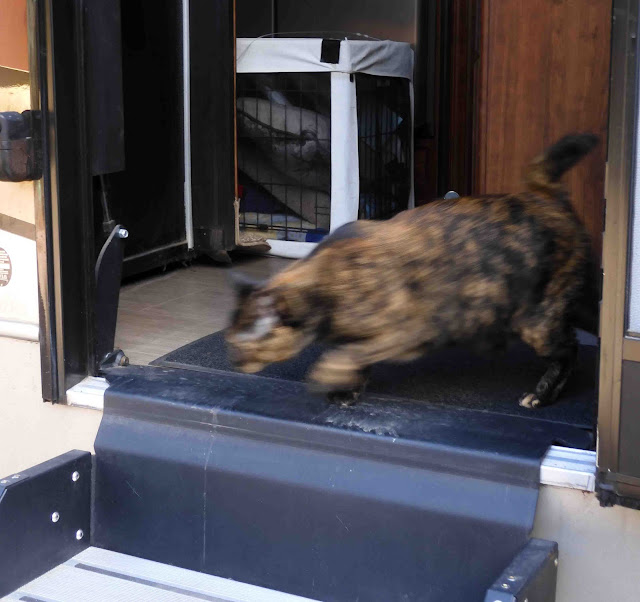 Things didn't look too bad. The Japanese Maple tree near our front door lost a large limb, but it did better than it has in previous ice storms, when we lost half the tree. 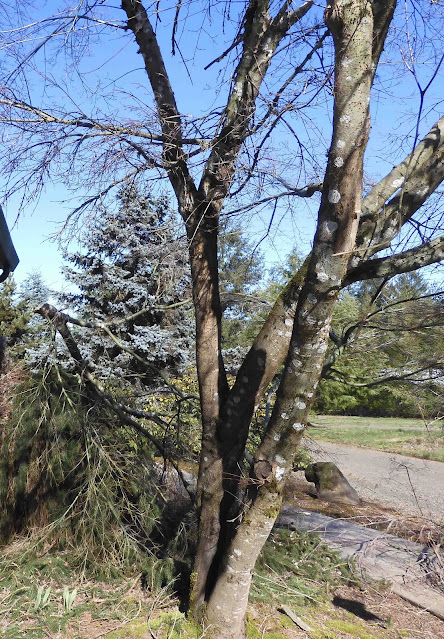 The worst damage was to some of the evergreens. Two of our big Douglas firs lost a lot of big limbs. You can see one of them in the image below. It's not a good picture because of the bright sky, and the tree was in shadow. I've messed with the highlights and contrast to try to make it easier to see. You can see the downed limbs on the ground, and there are more hanging up higher in the tree. 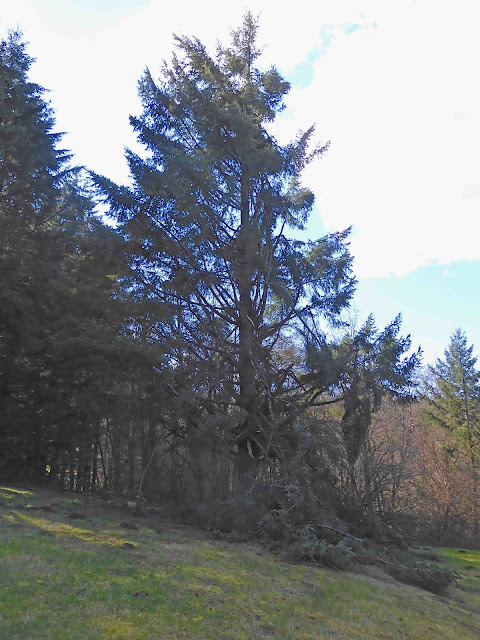 There is another Douglas fir that looks similar, and one of our white pines also lost some big limbs. Fortunately, the catio roof was still intact, and that was one of our biggest worries. Mike did some work on it last summer, shoring up the roof panels. If it can stand up to this storm, then it's probably good for now. The only thing I'm worried about now are the new plantings from last year: the clematis, the wisteria, and the blueberries. It's too early to tell, but I hope the ice didn't kill them. Younger plantings always fare worse.
And, oh happy day! The crocus are blooming! We planted more than 50 bulbs last fall. Only about a dozen have come up, but there may be more along the driveway. I'll check today, and maybe we'll get some more before they're finished. I noticed the daffodils are heading up, but they aren't even close to opening yet. 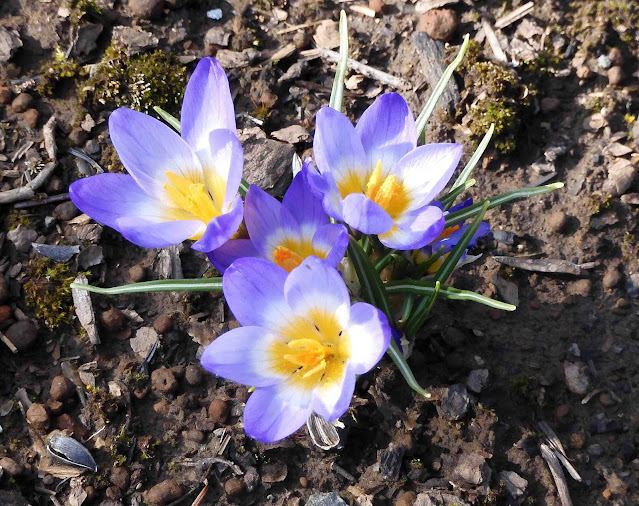 I was also happy to see that all the peony bulbs were budding out. I worried they might have been eaten or frozen, but they all seem fine. Obviously, we have a lot of yard clean-up to do, and that's the way it is in spring. Weeding and raking is in our future. 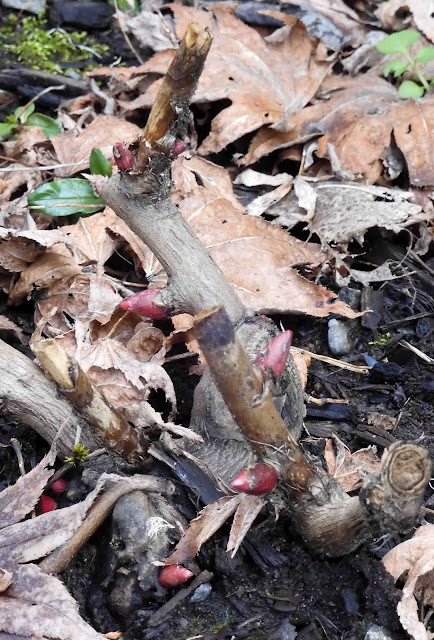 The poppies are looking good. I looked for some buds, but found only ladybugs. There were three on this plant. 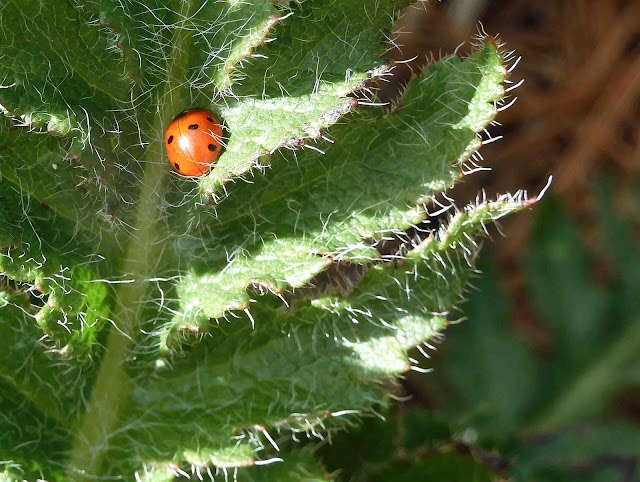 The greenhouse looked a little messy, and so I peeked inside to see what was up. Obviously those rascally squirrels have been up to no good. They ate half a box of flower bulb food! Who would have thought...? 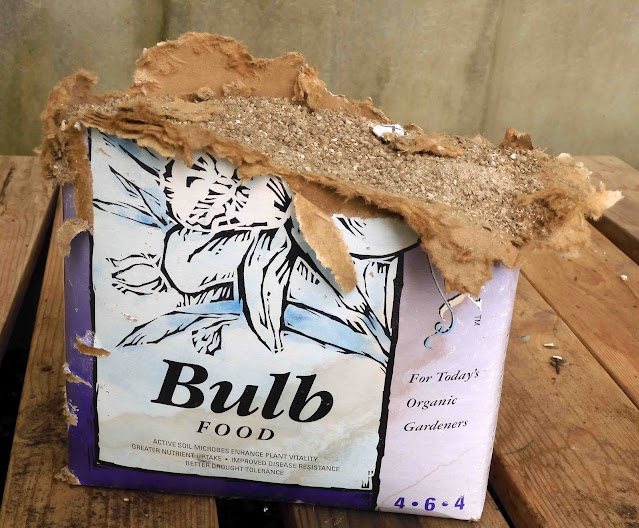 Also, they'd messed around with the slats that cover the potting soil. Inside, I found dead "shrubbery" they'd brought in for who-knows-why. F*ckers.
Smitty wanted just one thing...grass. He went straight to his favorite nibbling place. 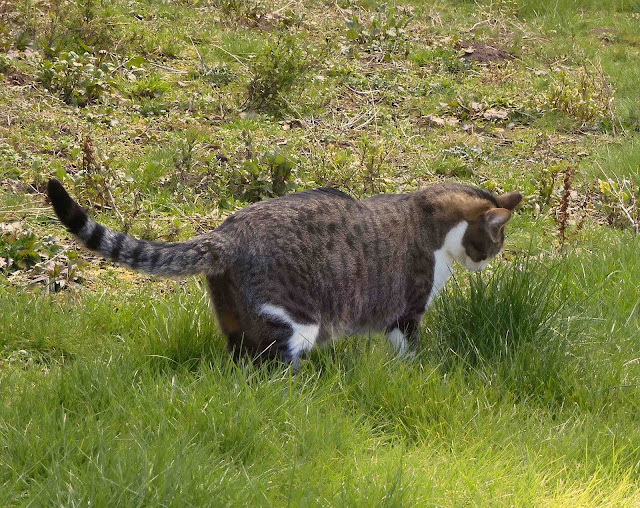 Sadie went to the same place. She always waits for him to show her where the best grass is. 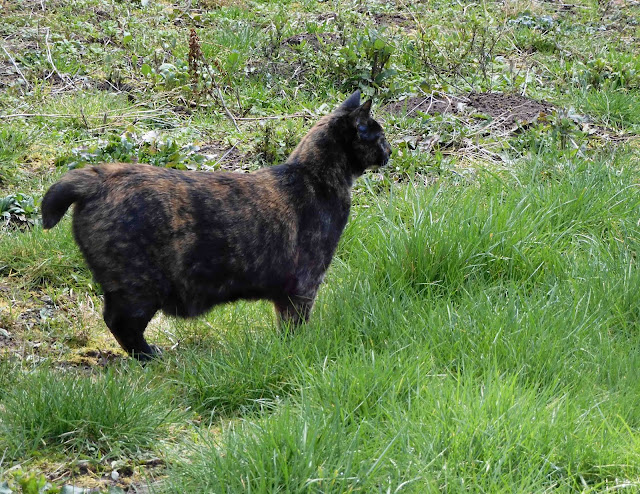 They seemed a little anxious and overwhelmed with their freedom, and so they were both inside for the night within about 20 minutes,. They had a good run around while they had the chance.
With just a few days left before St. Patrick's day, I wasted no time getting out my St. Patrick's day runners. This little table topper goes on the breakfast bar. 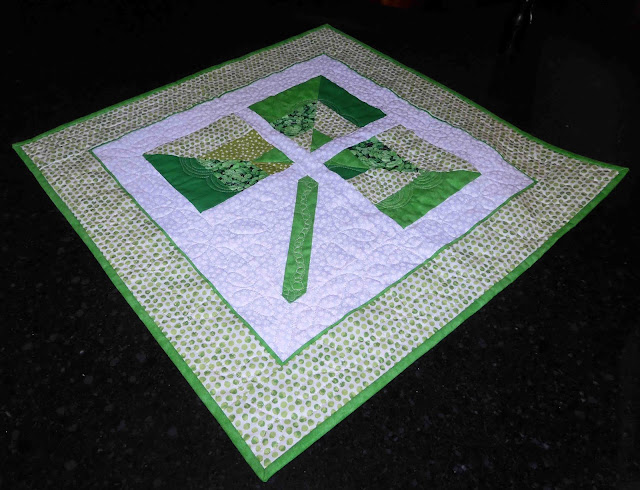 And here's a table runner I made a couple of years ago for the dining room table. 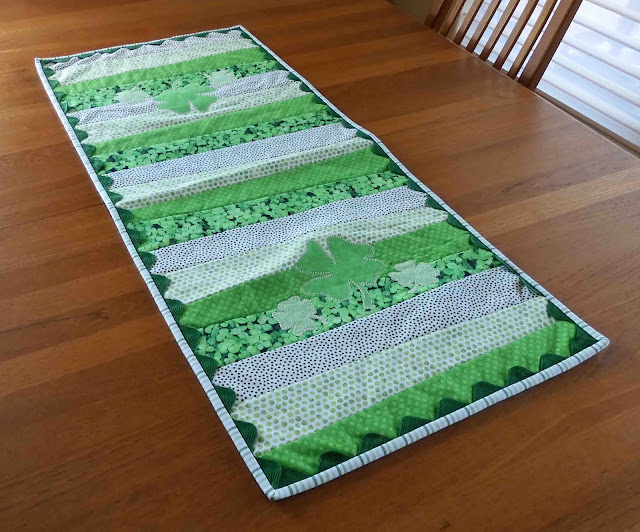 We only did a little unpacking yesterday...mainly food...and then we watched the news and Biden's speech. I worked on my slow-stitching and listened. 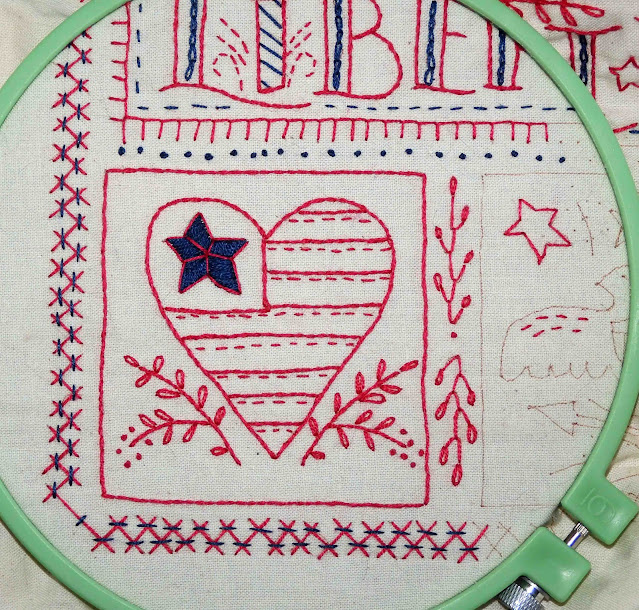 Now I've moved the hoop to encompass the last of it, and that's where I'll start this morning. 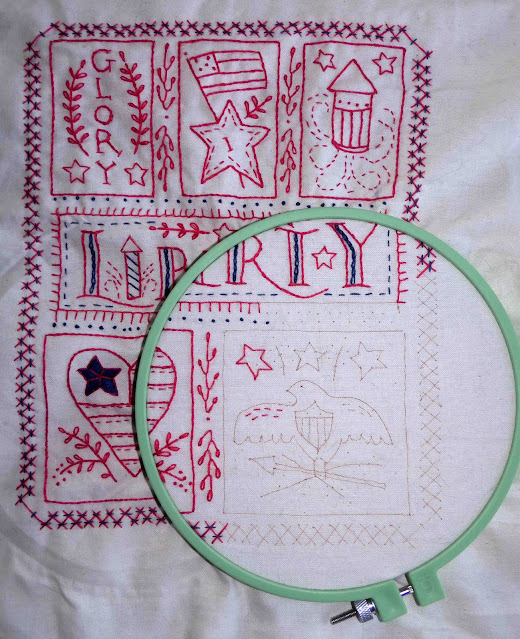 Today we'll do some more unpacking. Mike was kind enough to bring in most of the food last night, and so I expect I can get the food and my own belongings unpacked today. I'm still not able to carry anything heavy, and so I just load stuff into a laundry basket, and Mike carries it into the house for me. We need to make a short trip into town for a few things, but I believe we have enough food to get us through the weekend. I don't expect we'll get to the grocery store before Tuesday, because vaccines are Monday afternoon. Yay!
So that's it for Rainbirds 2021. Now we're back to the Three Cats Ranch until the cold winds threaten again. We have a couple of trips planned already, but nothing major until September. I'm looking forward to getting back to my sewing room and my seasonal planting and canning. Daylight savings time begins again this weekend. It looks like we've cheated Death once again.
Posted by Barbara at 9:14 AM

Welcome home! Glad to see your ice damage wasn't worse. We haven't seen crocuses yet but the snow is melting fast the past three days and we can see rapids on the creek from the kitchen window. Meaning it's way over its banks. Always interesting to see what it leaves behind when it recedes and how much it might have changed its course. I got my shot last Sunday, one-and-done. Was sick for one day afterward but fine since.

Welcome home --sounds like you are in good shape for the weekend...Daylight Savings time--yes!! Hugs, julierose

I'm very pleased you're all back home safe and sound and that your property wasn't too damaged by the storm. I love your slow stitching.

Your photos of the forest clean-up from the fires reminds me of driving along I-10 in the Florida Panhandle in March 2020 and seeing the destruction and clean-up remaining from Hurricane Michael in 2018. How eerie to see the same result from fire and rain.
Anyway, welcome home. It's a relief to see that the damage at your home isn't too severe. What about power outages? Did you lose food in the freezer? Take your time settling in and good luck with the shots on Monday. I get my second Pfizer next Saturday, but my husband has to wait another week to get his Moderna.
Pat

I visit to Sisters would be fun, it's on my bucket list if we get to Oregon again someday. Those squirrels have been partying in your greenhouse; I hope they found the bulb plant food more enticing than the bulbs themselves! Fun to see the kitties so happy to be home, and you two as well!

Ah, home again. Nothing like that first night of sleep and waking up in your own bed. If you think you will have a reaction as in other vaccines, you might consider grocery shopping on the way home from the vaccine. But I’m sure you thought of that.

Saturday is my two week after date. Those antibodies should be fully developed. The relief is quite remarkable after a year of constant vigilance. I’m sure you will notice the mental lift afterwards. I was downright giddy the day after #2 shot symptoms were over.

Yay! Home safe and sound. Love the kitty blue pictures....it’s not just humans who can’t wait to be HOME :)

Glad you are home safe and sound. I’ll get your patterns in the mail next week.

Keep entertaining us with your life!

Wow, your cats clearly are happy to be home. Amazing you were able to even catch a blur of them in your picture they were so eager to get home. Great photos. I'm glad to hear you made it home safely and weather was not all that bad for a day on the road. Still, you have more tree damage than I had hoped. Your squirrels are amazing. I would think their tummies would not feel so well and they'd only take one meal of your fertilizer, but it does look like they have been coming back to enjoy your "dine in" experience.