There wasn't a whole lot to see yesterday. We traveled north on US Hwy 395 for all but the last few miles of the journey. Let me tell you...there isn't much to see between here and there.

So let's just back up to yesterday morning. You can't see it very well in this image, but Sadie had a cat's eye view of the dog park beyond our site. She kept an eye on those wild woofies. Only when she was certain they wouldn't cause any mayhem did she allow herself to enjoy her morning sunbath. 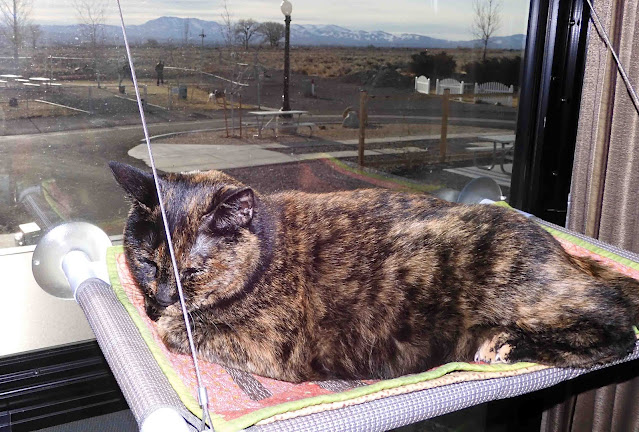 We were staying in Minden, just south of Carson City. We hitched up and drove north to Carson City where Mike fueled the truck while I ran into the grocery store to get some dry cat food. I think we have enough to get us home, but we won't have any when we get there. We do have our purriorities, you know. And we know what's impurrtant in life.
As we left Carson City, heading north, we caught this view of the mountains. 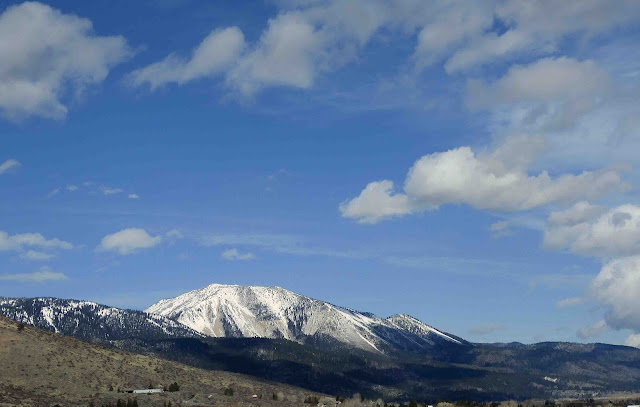 As I mentioned, we drove north on US 395 until just the last few miles of our journey. And what an engineering marvel this is, built on the side of a hill. 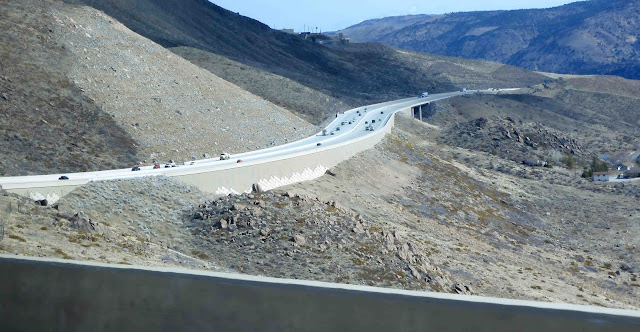 From there, this is pretty much the view we had for the whole live-long day. 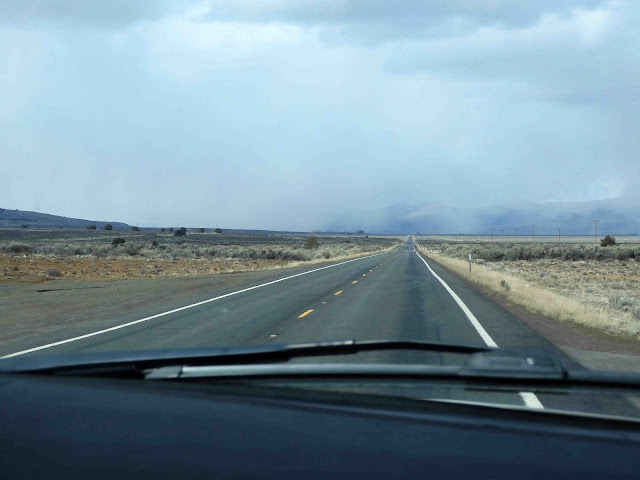 We were driving along the Nobles Emigrant Trail, and you can read more about it at the link I've given you. Here and there, we saw a barn. 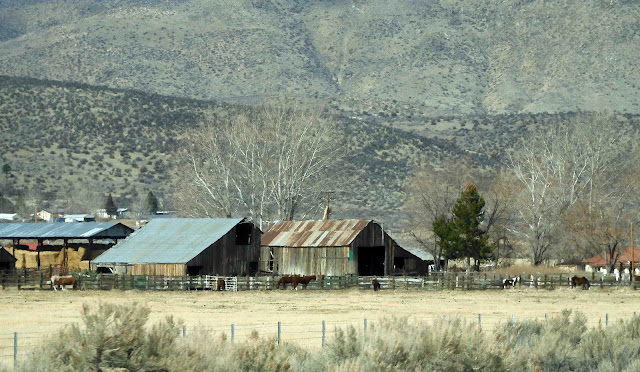 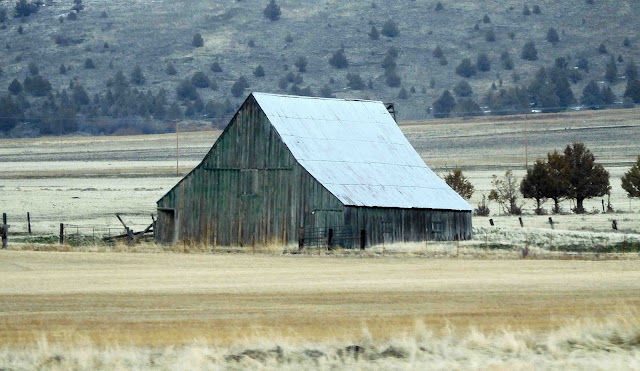 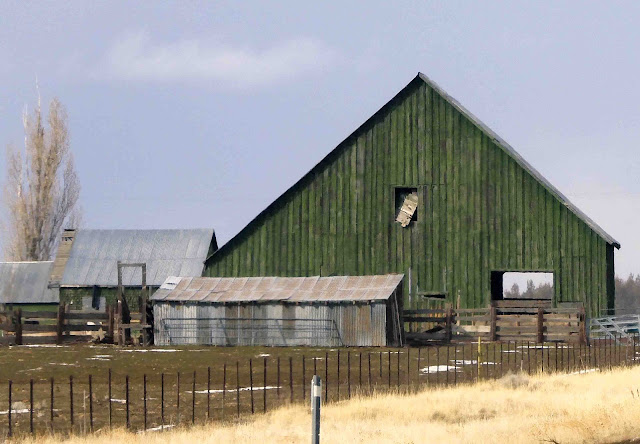 And this is ranching country. I thought this barn might have a quilt block. I suppose it could qualify as a quilt block, but only if it were applique. 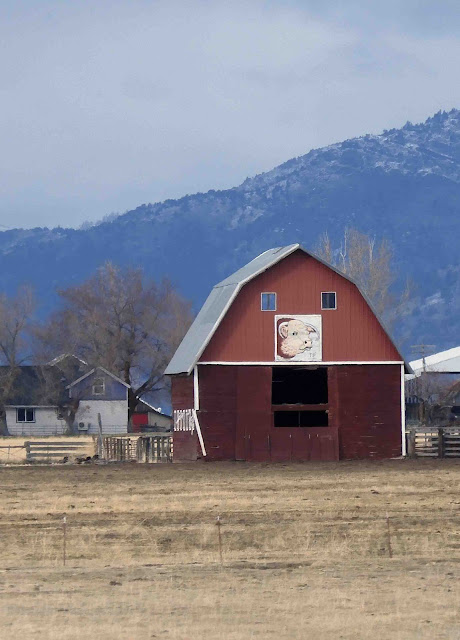 Some were more sheds than barns. 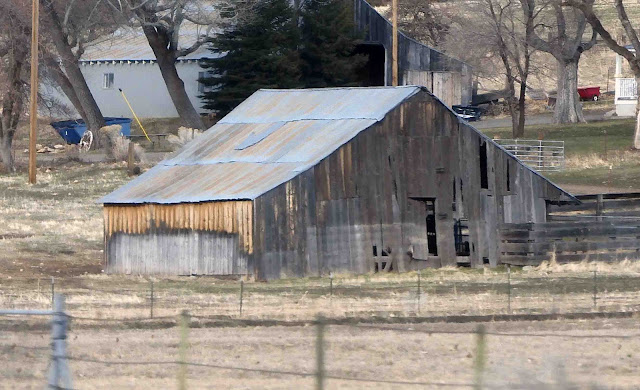 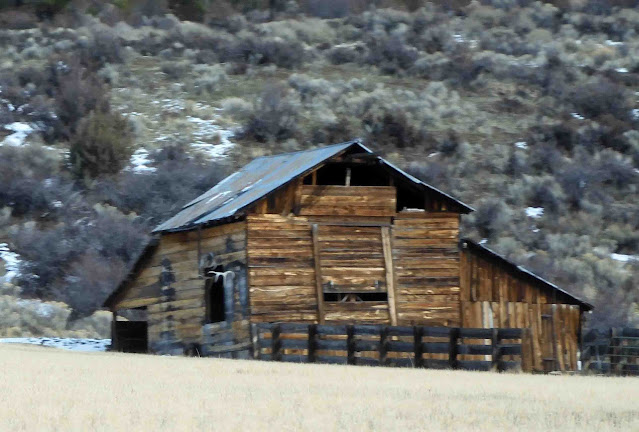 And I liked this old broken down water tower. We don't see these very often in our travels. 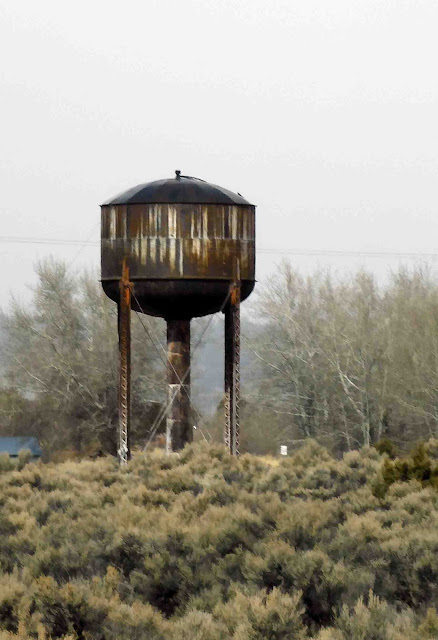 And what the heck is this? We don't know. 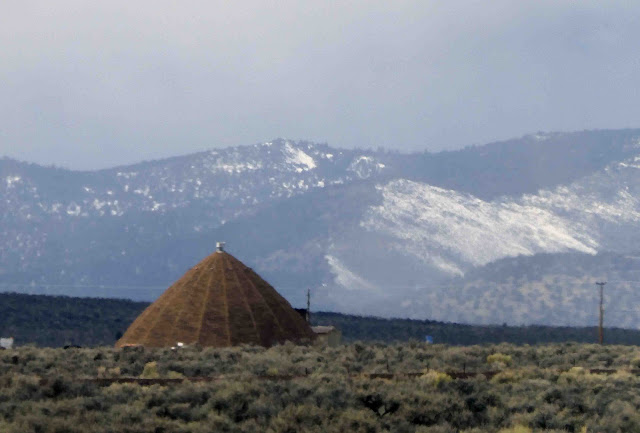 Just before crossing the California-Oregon border, we passed by Goose Lake. This is technically a "basin" since water doesn't flow out of it...only into it. We were able to pull off the road for a pano. Look to the left side of the image below at the tiny farms there for scale. (Remember to click on the image to make it larger if you like.) It was positively immense. And no way could I capture the whole of it. It extended around both curves in the road.

It's a part of the Great Basin of the United States. I was curious about this and so I consulted my dear friend The Google. According to The Google,

Goose Lake is a large alkaline lake in the Goose Lake Valley on the Oregon–California border in the United States. Like many other lakes in the Great Basin, it is a pluvial lake that formed from precipitation and melting glaciers during the Pleistocene epoch.

Now, this sort of stuff fascinates me.  If you click on that link I've given you, you'll learn that

The Great Basin is the largest area of contiguous endorheic watersheds in North America. It spans nearly all of Nevada, much of Oregon and Utah, and portions of California, Idaho, Wyoming, and Baja California, Mexico. It is noted for both its arid climate and the basin and range topography that varies from the North American low point at Badwater Basin in Death Valley to the highest point of the contiguous United States, less than 100 miles (160 km) away at the summit of Mount Whitney.

Whoa. I never knew Badwater Basin was a part of such a huge geological formation. And we were just there with the kids last year. Remember this picture? 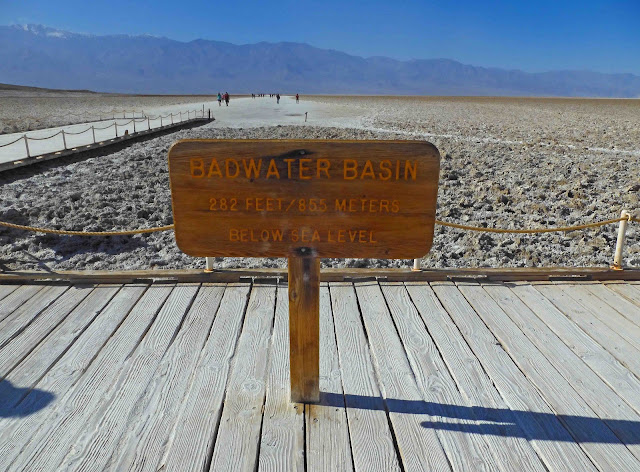 And if you didn't feel like clicking on that link I gave you back there, I understand. I don't like being bossed around either. So, I'll just share this picture from the same page to give you an idea of the size of this formation. 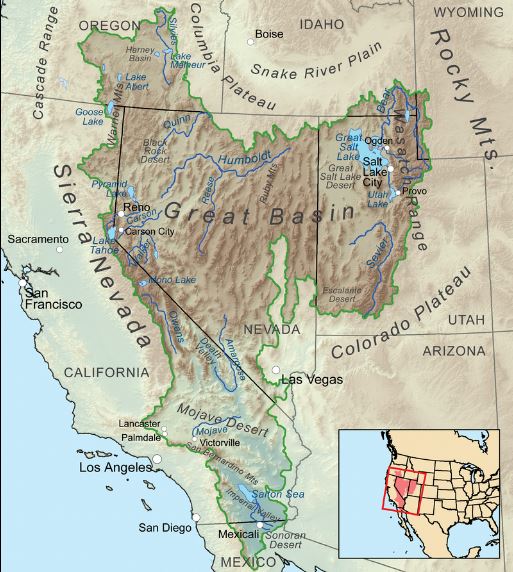 Driving on, we started getting into some snow, which is always worrisome. The roads remained clear, but the snow was falling fairly steadily in big flakes.

We had just a little way to go to cross the Oregon border and make our way to our final destination for the night. It was good to see this sign, and it's always good to be home. 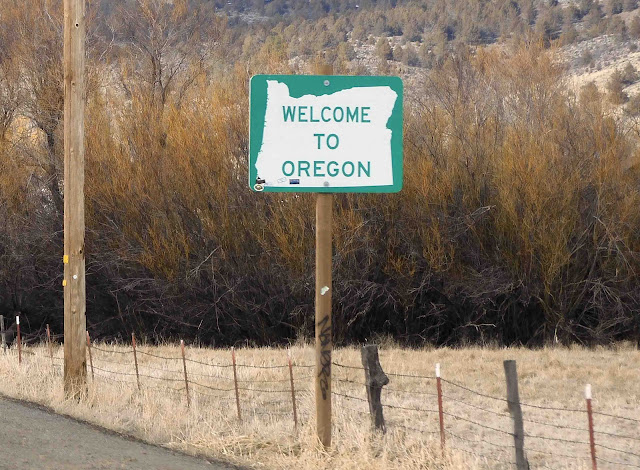 This is a 5,000 acre working cattle ranch, although the RV park portion of the property is off by itself. We're well off the road. There are no trains going by and no airplanes taking off and landing nearby. It's quiet...and dark. It's a great site. We'll definitely remember this. After we got hooked up, the snow stopped and the sun came out. Looking south, we could see this: 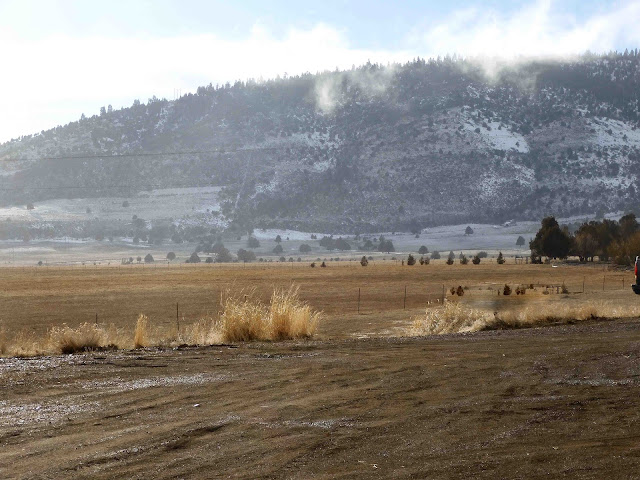 Looking north, we saw this: 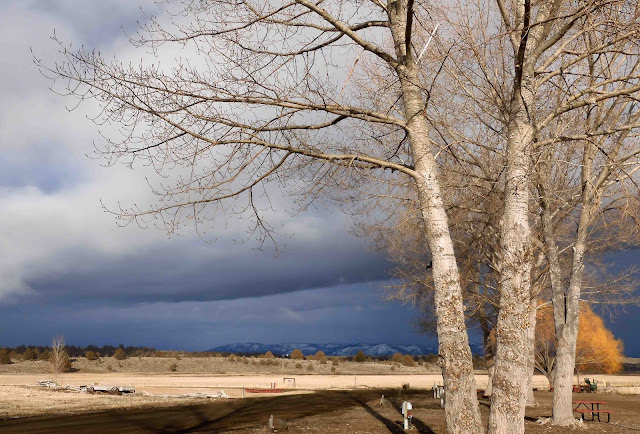 We had a quiet night, but woke up to about an inch accumulation of snow...never a happy thing when towing a big fifth wheel.

We're hoping to find ourselves in Bend this evening, and we have a site reserved there. We've checked all the traffic cams along the way, and it looks like smooth sailing, despite the small bit of snow. We still have to get across the Cascade range somehow though, and so it looks as though we'll have to drive all the way north to the Columbia River on Thursday and make our way west through the Columbia Gorge. It's a little longer route, but barring any ice storms, it's the safest route we can take.

So now I'm back into maybe-I-will-and-maybe-I-won't blog again before we get home. We'll all find out together. We have vaccine appointments booked for Monday, and so...come hell or high water...we will be there to get those vaccines.

I like to cook my own food and serve it on dishes that I washed. I like to eat in my own spot, drink a cold soda, and watch a good cop show. So, when I’m out, I just look forward to that moment when it’s time to go back home. ~ Unknown

Hi Barbara...
I have enjoyed following along on your latest travels! As always, I have learned a thing or two about parts of our country I have never visited, through your awesome pictures and all the facts and details you share about the pictures...
In today’s post you showed a picture of a dome structure that you mentioned not knowing what it was... I know what it is!
In Virginia, they are salt domes, used by our Dept of Transportation to store salt and chemicals for deicing the roads in icy or snowy weather. There is an opening in one side that allows the big trucks to back right up to the domes to load up the salt or chemicals before applying to the roadways. I don’t know why that particular shape was chosen, but there are a number of them throughout the state.
Safe travels to you and Mike, and the kitties as you complete the last leg of your trip!
Sandra B
scb304@juno.com

Enjoyed reading about this trip. Sending safe travel vibes for the rest of the trip. Can't miss those vaccine appointments.

Yay for vaccination appointments!!!!! I’ll keep you in my thoughts as you travel home. Good thing you restocked the feline chow ;-)

What a beautiful pictures you have made from this trip.Beautiful country.
Wish you a save trip home and happy vaccine-day!

So happy to have been on the back bumper again for this trip. You show us so many places of our wonderful county. Safe travels for the rest of the trip--and NO reaction to your vaccine shot. :-)

I don't think I've ever seen a green barn! Love the color. Hope you made the leg of the journey through the snow safely. Glad you are able to get your vaccines, too!

There was all kinds of weather here on Wednesday. It was one of the fiercest storms of the season that even had an accumulation of hail. Let’s hope what this day’s post showed is your encounter with the storm and nothing more. By traveling the by-ways of the US you take a step back in time. All travel across the US was like this years ago. A much quieter existence. Travel safely as you go. We want to see you on the blogishere with your Covid vaccination story.

The US has some really cool geology and topography. It's always fun to see your travel photos. Thankfully, no snow for us, it's warmed up enough for just rain, but the wind hasn't been nice.

I do like riding along in your front pocket to see where you are and what is happening around you. Your blog is so informative and educational as well in so many ways! Thank you for all that, but especially for your humor!