When I see snow, I'm reminded of a bit Garrison Keillor did on A Prairie Home Companion once when he talked about folks in Minnesota in the dead of winter. Snow was piled so high and deep that folks just didn't want to talk about it any more. So, in conversation, he said, "It's no problem," but what the listener heard was "It's snow problem," and yelled "SNOW! Don't talk about it! Aaaarrrrgh!" Still makes me laugh. So, yeah, here one hour from the often-hottest spot in North America...with snow. So, it's snow problem. But it is annoying. Fortunately, the sun is coming up, and so it won't be around for long. This first image is directly behind us: 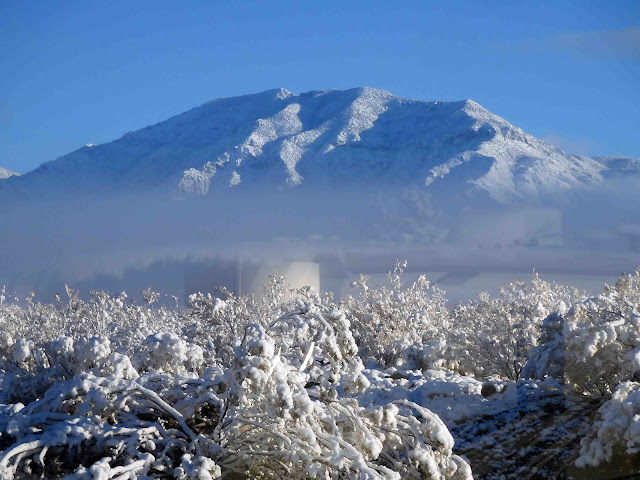 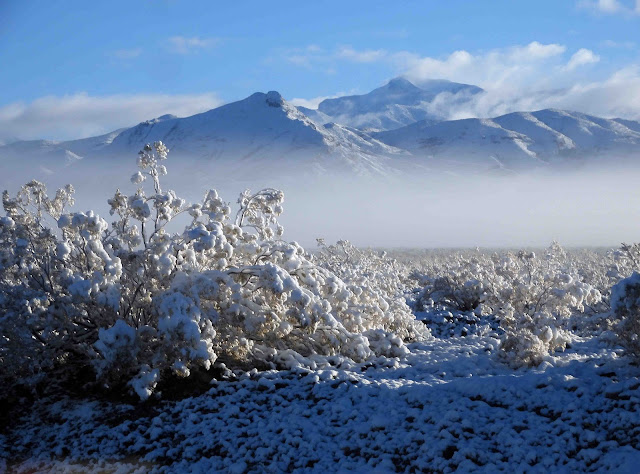 It made for an interesting sunrise this morning. It took the sun a little while to rise above the clouds. 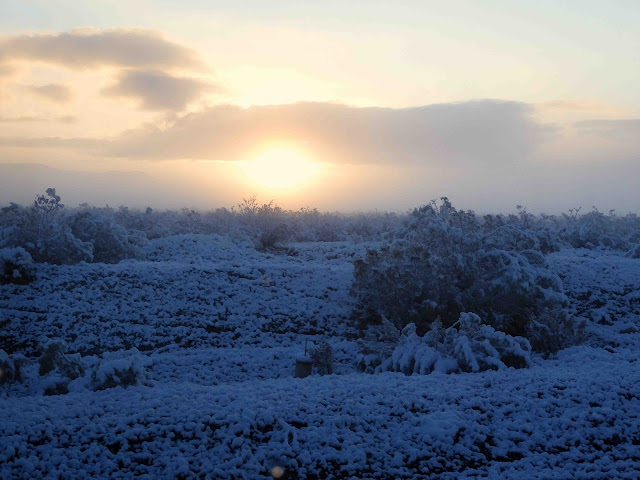 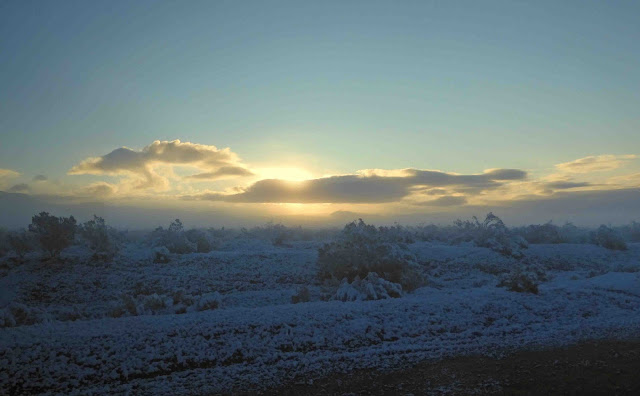 And what self-respecting hummingbird will stick his beak into a feeder that looks like this? 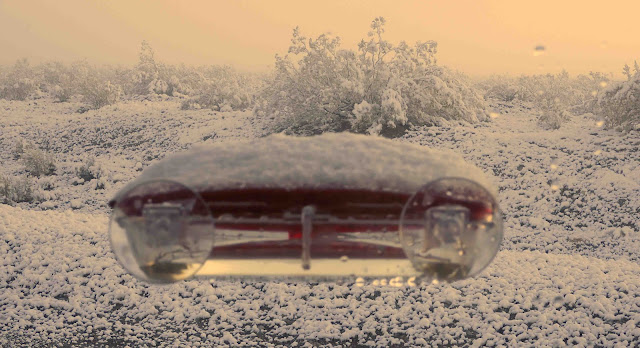 The nectar doesn't appear to be frozen though, so I suppose stranger things have happened.
Certainly no self-respecting cat will be inhabiting a snow-covered catio though. 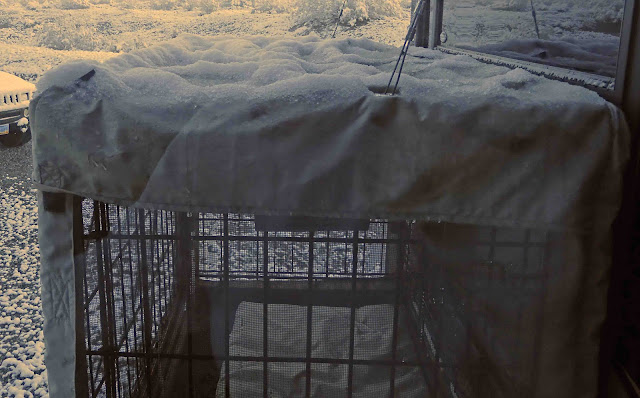 And what about this rosemary bush where the bunny lives? Don't you suppose the bunny is cold? Or is this some kind of bunny igloo? 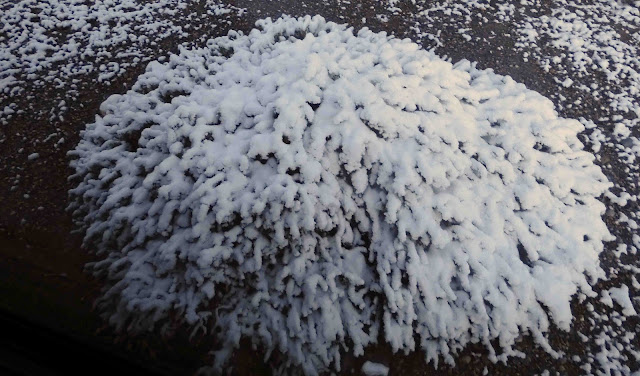 And look at Mike's truck. I was taking this through a window, and so I couldn't get the whole thing. 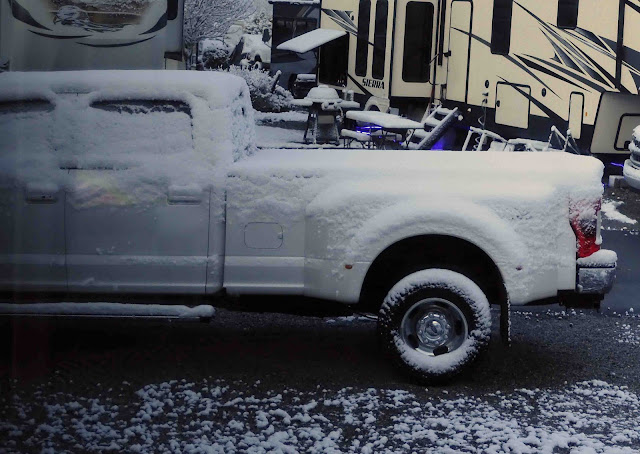 And just looking at the truck, I'd say we have about two inches of accumulation.
So yesterday was kind of a lazy day. I think I'll just stop talking about sewing until I actually do it. I realized by the end of the evening that it's shoulder pain that is holding me back as much as anything. When I first injured my shoulder and thumb, the pain was excruciating. Any movement was scary with the prospect of pain. And 7-1/2 weeks on, the pain is tolerable, but it is still present 100% of the time. Sometimes I'm more comfortable than others, and I have ways to reduce it by changing position, adding a pillow, etc. But I'll just say that being in pain 100% of the time...even tolerable pain...is exhausting. And so I'm taking a lot of naps. When I think about dragging everything out to sew, even with Mike's help, it seems like a lot of effort for just a little pleasure. It explains why my sewing mojo isn't what it usually is.
But the good times keep on rolling in because we made a quick trip to the grocery store to get some OJ and some small trash bags. As we were leaving, I spied a display of shot glasses, and picked up the first (and maybe the only) shot glass of the trip. Whoo hoo! 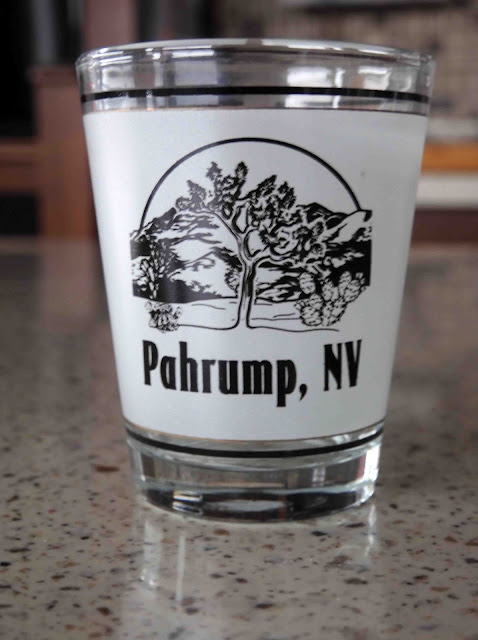 As we were driving back, we noticed the mountains were covered in snow. Note that the desert floor is clear though. The accumulation we have now is what fell overnight. 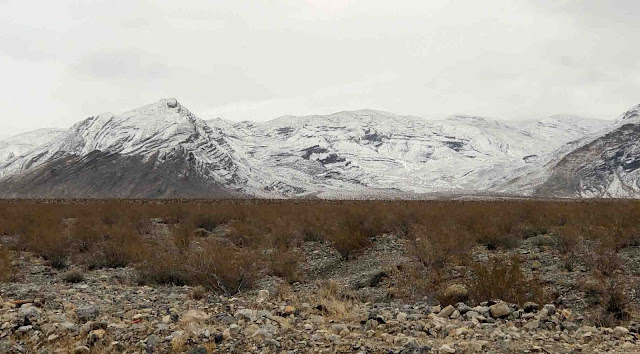 There was some time for slow-stitching yesterday, and I expect I'll fill this hoop this morning. 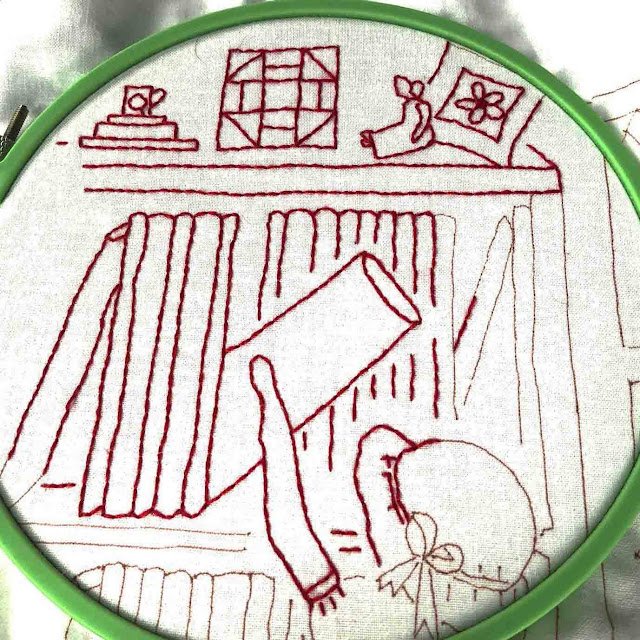 Smitty was my stitching kitty yesterday. 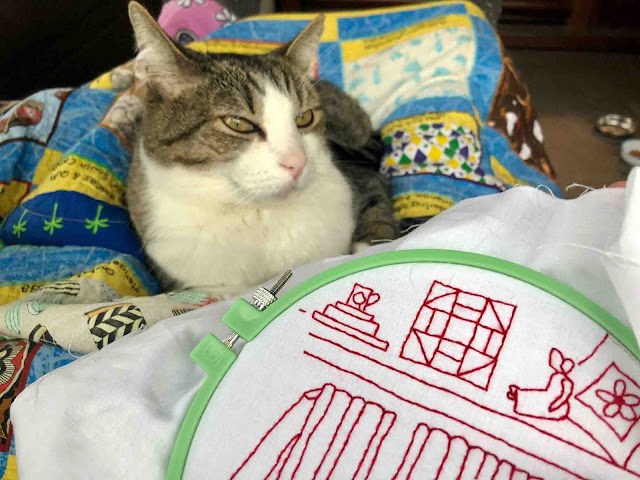 So there's nothing on today's agenda. I'd say I'll get the sewing machine out and sew, but I probably won't, given my past record. Maybe I'll start with just a cutting mat, rotary cutter, fabric, and instructions and do some cutting and see what happens. I'd like to get started on one of the minis. We'll just see where the day takes me. My highest priority is staying warm. The weather is supposed to get warmer as the week goes on, so I don't expect this snow will last for long.
Posted by Barbara at 8:35 AM

Kindness is like snow. It beautifies everything it covers. ~ Kahlil Gibran

I woke up to snow here in Tucson this morning! While there wasn't as much as you have, it was still exciting for this old desert rat. The sun is trying to come out so what little accumulation there is will be gone shortly. If you don't have to drive anywhere it's fun to watch.

Oh my, that was unexpected (or maybe not for you). We had a some snow this morning, probably an inch or two. But we won't be warming up this week. Daytime highs for Thurs and Fri are supposed to be in the teens.
I bet Smitty didn't want to talk a walk today.
Pat

The snow is here now and will be for another 24 hrs. so we might be buried. I have no energy today other than to nap with the furkids.

Your snow is very beautiful. We have just lots of rain :(

Oh my goodness, what a difference a day makes. Beautiful photos, but I'm sure the weather brings a chill. Not sure if you are still able to get out on walks, but hopefully you are keeping warm in your RV and enjoying the quiet time. It won't last long. I think another storm is coming, but soon it should be dry (and warmer) again. The plants in my yard are very happy with the rain, but more is supposed to come on Friday. For me this is perfect quilting weather. Lentil soup for dinner tonight.

My friend and I made a trip to Death Valley back in late Oct. It was hot and dry the 2 days we were there but I was talking to a gal at the pool who'd been camping (in a TENT!) there for a month. She said when she'd first arrived, it was down in the 30's a couple of nights with very high winds (IN A TENT! UGH). YIKES

I read your blog everyday because I am a "cat person", I love to garden, I love to quilt, I love to cook, and I love to learn about new places.

So your blog is terrific reading for me.

A question about cat etiquette: Do your cats respect your personal space? My 2 cats have a tendency to want to sleep high up on my torso. If I let them, they would probably sleep right on my face. In your photos, your cats seem to sleep mostly on your legs which I wish my cats would emulate.

Also---what treats do you feed your cats?

We've had snow about 2" off and on all day...and now it's freezing drizzle out there...good night to be inside...rest up hugs, Julierose

I love your daily quotes! Thank you!

I well recall how exhausted I was when I had lower back issues. It gave me a whole new appreciation for those who live with chronic pain. I sure hope you get some answers soon as far as moving ahead with your shoulder issues, and something that will lessen that pain. Snow -- really? And right after the wash & wax guys were there!

Maybe if you don't talk about sewing you will actually end up doing it since when you talk about doing it you don't. :-)

The snow is so pretty. Maybe that could be your photo challenge for the day.

And we have snow on our hills. Have not read whether there was debris flow from last nights rain. I am reading you first. I do like seeing fresh fallen snow. It looks so magical. It is a once in 20-30 year event to reach our home. When we lived in Germany I loved opening the Rolladin up and seeing the trees and houses looking like a fairy tale. Going over slippery roads is another matter. Thanks for the pictures. Sewing will come. It might be good to take your time warming up to the possibilities.

Holy crap! Our friends in Phoenix posted far off snow covered mountains (ok, so, not all that far off, and truth be told, only snow capped and dusted at that. But then there was one of a dusting in Cave Creek) and I wondered if you would see any of it...who knew it would accumulate! Meanwhile, we hit 83 today, but will be 39 tomorrow night. Bat poop crazy!sorry to hear you are suffering so much. Chronic pain IS exhausting, painful (duh, right?),and can lead down the rabbit hole into serious depression. Hopefully, your slow stitching can keep your outta that dark place. How long before you get another xray?

Snow? Yuck!!! Makes for some pretty pictures though, but I don't have to say I like it. Hopefully that's a one off for your trip and there won't be any more.

It's nice to wake up to a winter wonderland occasionally, even better if doesn't affect the roads! I'm sorry to hear you are still in quite a bit of pain. Do you have a follow up appointment at some point to check on the healing process?

Snow is beautiful, when you don't have to go out in it!