A Breath of Fresh Air

What a dull news morning it was this morning. I read most everything with a light heart, and I don't believe a single gasp escaped my lips as I sipped my coffee. Yesterday morning was greeted in a similarly light-hearted way. We watched the swearing in ceremony, and then Mike made celebratory waffles for breakfast. 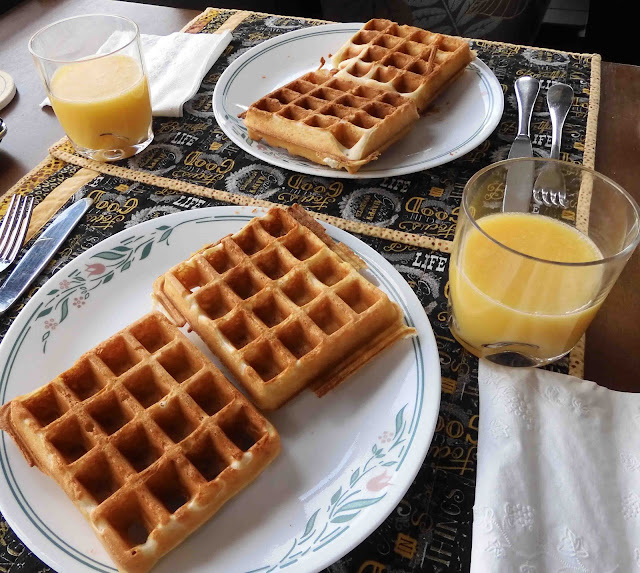 Waffles are Mike's signature dish. He makes them the way my mother taught us...with Bisquick, the way they do it on the box, only we substitute club soda for the milk. It makes them nice and light. Mike's been making waffles more often since I broke my shoulder. Now that I'm back doing most of the cooking again, I figure he's not getting off without making waffles now and again.
While I was listening to Biden's speech, I was just getting started on the Quilt Shop redwork. This is a fairly large piece, and so it will take me a while to finish it. I just hope I brought enough floss. 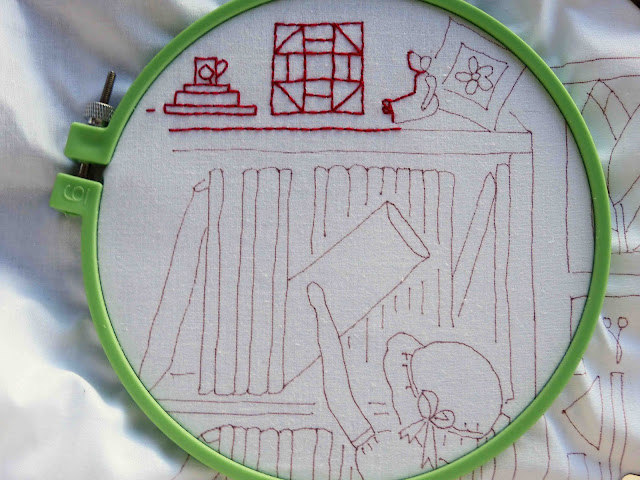 My thumb is giving me trouble, and so I might need to hold off for a few days. My shoulder is feeling pretty good most days now. I can move it most directions, although I'm still far shy of full range of motion. The thumb, on the other hand, is taking lead spot as the injury that hurts the most. I did quite a bit of slow stitching in my push to finish the Rise and Shine piece. Now, I believe my thumb is letting me know it's had quite enough of that nonsense. I'm stubborn though. Probably I'll have to make it hurt worse before I'll give up on my morning slow stitching.
After breakfast, we went out for a walk around the RV park. The mountains behind us are called the Spring Mountains. You can see there is snow on the peaks in the distance. 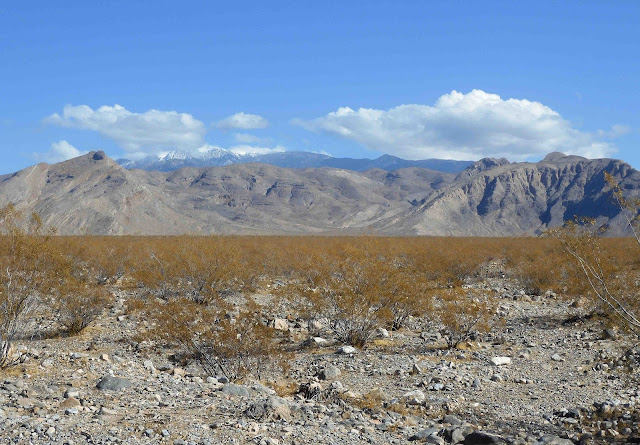 Mike wanted to check the pool area to see if the pool is heated. The hot tub in the foreground is nice and warm, but the pool beyond is icy cold. If you're thinking of doing any lap swimming, it will need to be in the hot tub. 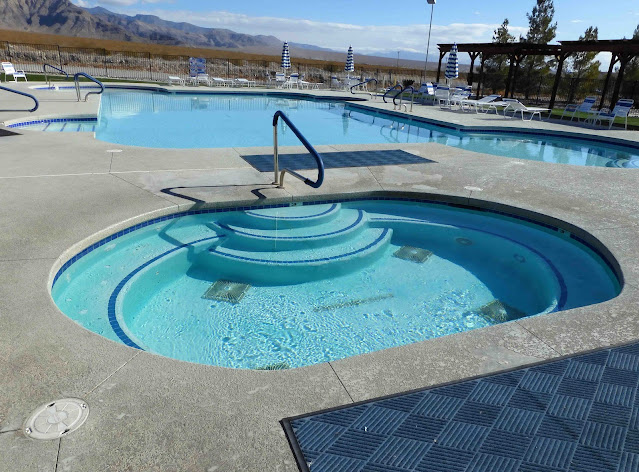 Here, I took another blue shot, this time with lines. 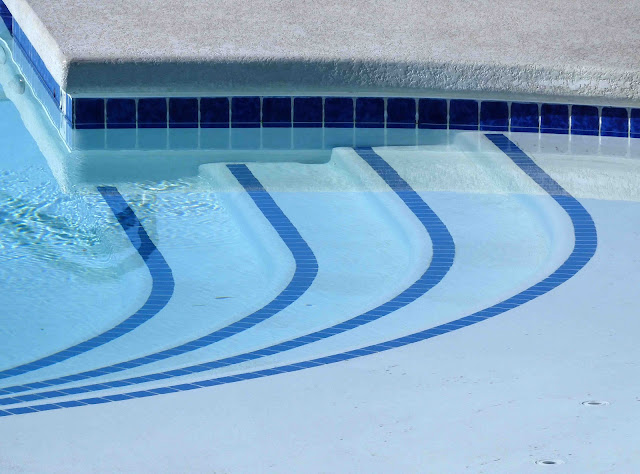 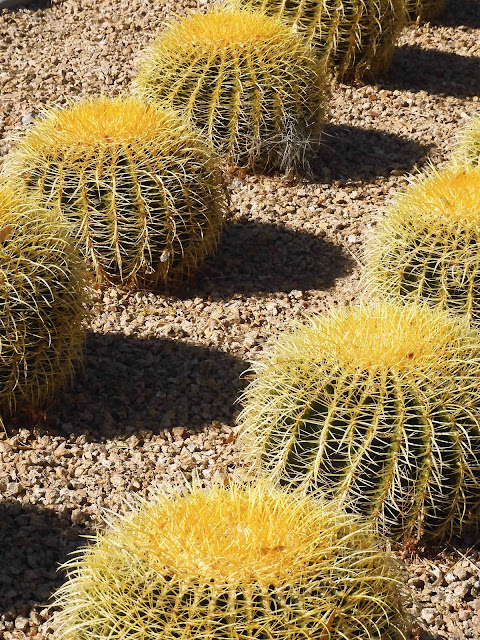 They have nasty thorns though, so touching is discouraged. 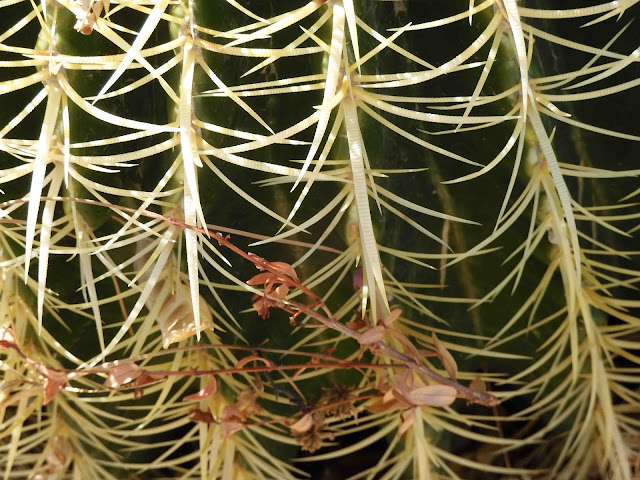 Later in the afternoon, we got Super Smitty out for a walk. He was on high alert, and honestly, have you seen a more macho mancat in your whole life? 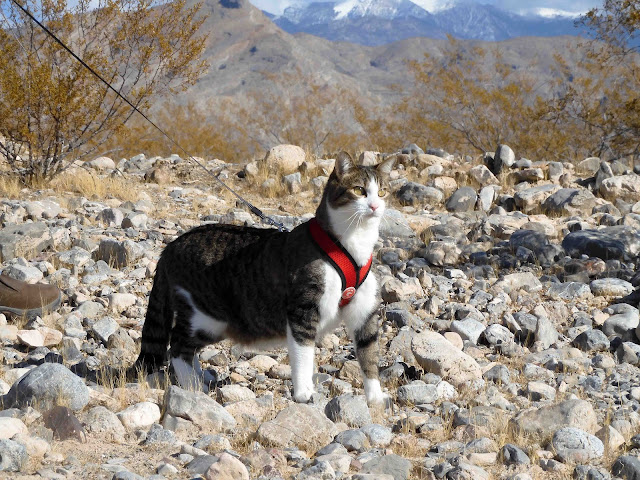 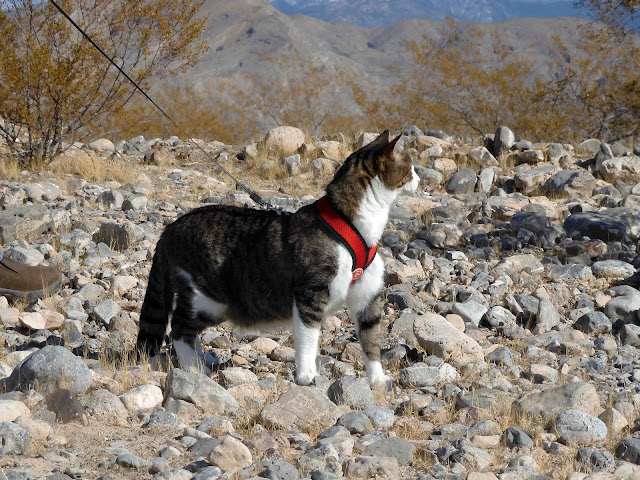 I thought it might be a pretty sunset. The "sunset" never really materialized in the way I thought it would, but I liked how the setting sun cast a pink tinge on the snow-capped peaks. 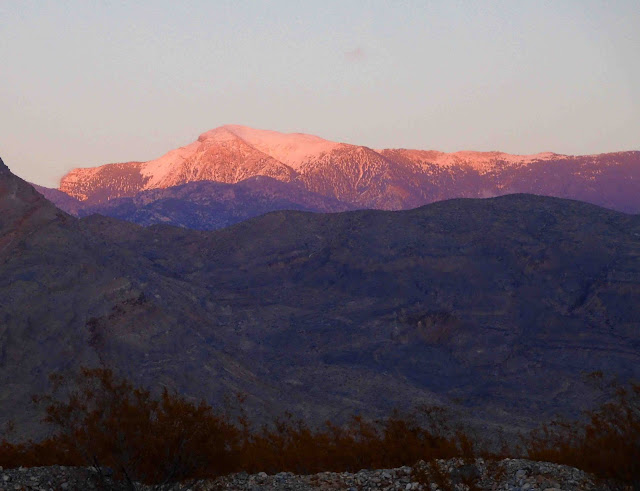 Up until last night, we've been eating leftovers at every meal. When we're home, I'm often freezing half of what I'm making for future RV trips. We've finally exhausted our supply of those and the leftovers they produced. Last night, we were back to regular cooking for the first time. I raided the freezer looking for cuts of meat I'd stowed away before leaving home. Among them, I found these hunks of tri-tip that we marinated to make this Barbecue Sirloin and Blue Cheese Salad. So yummy. 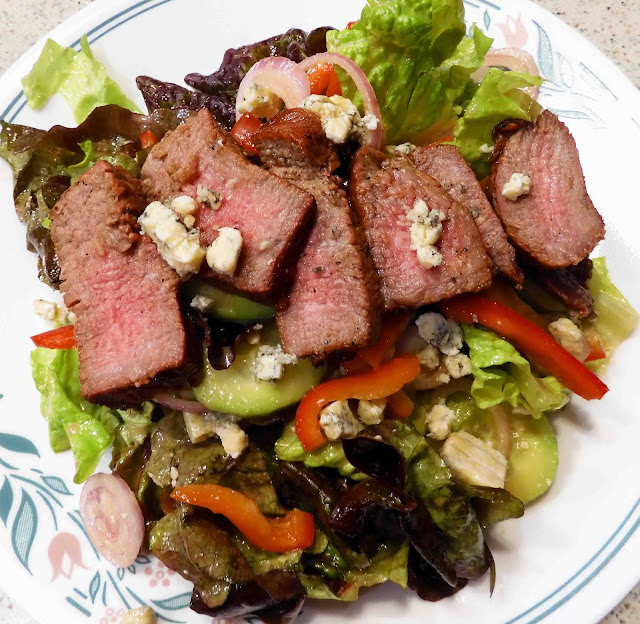 The recipe is one from our diet. If you click on that link I've given you, you'll see that it includes a rub for the meat. We've done it that way, but last night, we marinated the meat instead, using our favorite "Better than A-1" marinade. It's good either way. It just so happens I forgot all about the rub until I'd already made the marinade.

So today a crew is coming by to wash and wax the RV. It's a traditional maintenance task when we make our Rainbird trips. Mike would ordinarily do this, but we pay someone to do it when we come south. It's a lot of work, and it would take Mike days to do it on his own. A crew can do it in a few hours. It's a man thing, you know. He already took advantage of the coin-operated car wash here at the park to wash his truck.

Just before dinner, there was a little excitement here at the park. Someone drove on the road behind our rig (had to be a guest here at the park) and fired two gunshots off into the desert. Well, don't you know that got folks riled up. A park employee lives in the RV beside us, and so he had some words with the offender. Mike spoke with him later and the employee told him the "guest" was a "lunatic," and that the park would handle it. Hm. Mike's going to pay a visit to the office this morning to check up on this "handling" business. It's illegal to discharge a firearm in an area like this, and we were none too happy to have it happen right behind our rig. More on that when I know more.

I'm not sure what's on today's agenda. I'm still threatening to get out the sewing machine and do some sewing. If nothing else, I might start doing some cutting for a little mini. Or I might make a mask out of some camper fabric I have. There's no telling what might happen when the sewing machine comes out. It's Pfelicity, you know, and she loves a sewing party.

Let us then, fellow citizens, unite with one heart and one mind. Let us restore to social intercourse that harmony and affection without which liberty and even life itself are but dreary things. ~ Thomas Jefferson in his Inaugural Speech of 1801

I listened to the news without gritting my teeth , my jaw is going to be so much better now. Hope is a wonderful thing. I'd lost it but have found it again.

Dull news is so refreshing, isn't it? The sun was shining a bit brighter today and the air was much sweeter. We have certainly turned a corner and are heading towards better days! I need to try my Bisquick waffles with club soda...such a good idea! Sure hope they get to the bottom of the mystery shooter and get his guns locked up. I was so happy there were no reports of violence yesterday, but this may be one! Stay safe!

I'm happy the news isn't showing signs of violence and the day is peaceful. I'm also happy your shoulder is doing so much better and I'm hoping it continues, as well as your thumb stops hurting very soon. Would a nice soak in that heated jacuzzi help? Watch out for that lunatic. The guy is definitely wacko to be shooting a gun so close to where people are trying to "relax and enjoy" life. I hope the rest of your stay is quiet and enjoyable. Enjoy time with Pfelicity. I like your idea of a new mask with camping fabric. I'm thinking of making one this weekend with Valentine's theme fabric.

Your redwork piece is going to be really pretty...give that thumb its rest--I dealt with my thumb/wrist for months before I realized that rest was the best cure...
Hope they banish that shooter--not good...
Stay safe Hugs, Julierose

After a happy happy tearful day all day, I had gritted teeth this morning when I awoke to wacko texts from my BIL. Jack says we can't divorce his family, but I am not so sure. The salad looks great and the marinade is going on my Must Do list for sure. Since Smitty clearly did not appurrove the 2 shot salute, would he be soothed by knowing that he had a 21-cactus salute instead? What is wrong with people - no gun ranges near by? Seriously, some gun folk are so busy asserting what they think are their rights that they neglect the duties that go with them. No patience for that ever again.

Weren’t the arts parts so beautiful? Loved the rendition of the patriotic songs, Amazing Grace and the POET! Each had me with glistening eyes. Such heartfelt and moving moments. It stirred my patriotism like nothing else in the last four years. This new hope brings with it the reasons why I do love my country. I pray we see a Congress that can find a compromise for the good of the nation and its citizens.

Good to see your routines coming back.

We did watch the ceremony too; an historic day for our country. That photo of Smitty is quite something; he is a handsome cat! Bummer about the thumb giving you some issues. Hope the pain goes away so you can keep stitching. Yikes about that guy firing off shots. Hope they oust him from the park.

I think most people were glued to their tv's watching the inauguration and I'm pretty sure I heard a collective sigh of relief when it was over and there was no undue demonstrations. And then you have to go and have all that excitement! Wow - hope they get that idiot behind bars and keep him there for a good long while.

The ceremony was just outstanding in so many ways. Smitty is one handsome manhunk for sure. Hope the park quiets down safely.

My husband was talking on the phone with a friend in Michigan who said he hadn't heard his wife swear at the TV for the first time in 4 years. At least two thirds of the country felt refreshed and hopeful on Wednesday. Now if the media could get over their addiction to the former President, we might be able to forget about him for a while.
Pat

LOL It's almost (notice I said almost) humorous to see the takes from different sides this week....fully half of the country is disgusted and the other half is relieved. They don't seem to be able to talk to each other, or try to persuade one another, without being labeled. :)
We'll see what are the real consequences of the first flurry of executive orders......watching carefully.
Your quote on unity is a good one, thank you, - unfortunately, not many today seem to like this one: "Without freedom of Thought, there can be no such thing as Wisdom; and without Freedom of Speech, no such thing as public Liberty." (Benjamin Franklin)
Love the manly pic of Smitty! He's a doll!

Oh Smitty, he's so fine, I almost lose my mind!

It's good to hear that your shoulder is healing up well. Sorry for the troublesome thumb. Hopefully that's better this week. Smitty looks very handsome in his walking vest.