Yesterday, I was only just getting started in the sewing room when the phone rang. We don't have a land line any more, and most of the calls that come in on my cell phone are telemarketers...or something. Who the heck knows why they're calling? Anyway...if they aren't in my contacts list, and the name doesn't display, and the call is coming from another state, as this one was, I don't bother answering. About five minutes later, the doorbell rang. I heard the bell, but Mike was upstairs and he answered. If it had been just me here, I probably would have ignored that too. Our delivery people usually just drop packages on the front porch, ring the bell, and then drive off. Where we live, there's no worry about thieves.

So, I was kind of surprised when Mike yelled down the stairs, "Barbara, you have visitors!" I was turning off my audiobook when I heard footsteps coming downstairs. A man and a woman came into the room, both wearing masks. The masks made it difficult to recognize them, and I was scanning my brain for the faces of my neighbors and coming up empty. Then, with great surprise, I realized it was a couple I'd gone to high school with...of course, they weren't a couple then, but they have been for, hm, let's see...48 years. Meet Ken and Pat. To say I was flabbergasted would be an understatement. 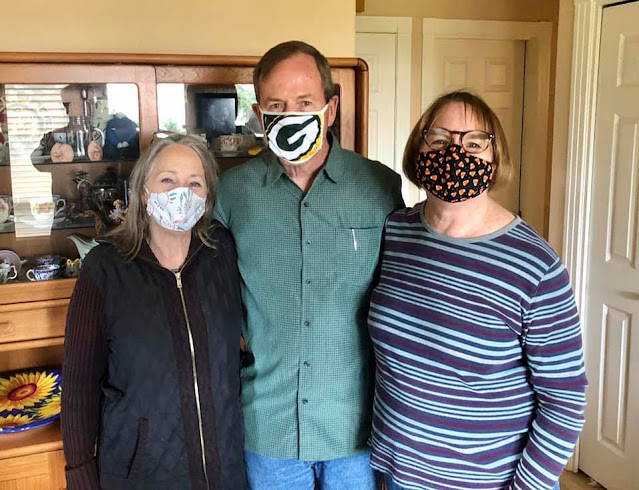 Ken has a job that requires some traveling, and they were just passing through...Ken for his job, and Pat was along to visit one of their daughters who lives along the way. They were only here for a few minutes. They even left the engine running in their car. I felt kind of bad I wasn't able to offer up more hospitality, but whoa...I was just glad I was dressed and fairly well put together. What great fun seeing them. Except for one high school reunion more than 20 years ago, I haven't seen them since the day we graduated high school in 1862 (yes, you read that right). We don't look half bad, do we?
Several months back in a moment of generosity, I offered to make themed masks for some of my friends. Ken and Pat wanted something western themed, and I made masks for them from some long-horn steer fabric I bought while we were in Fredericksburg, Texas. They brought flowers as a thank-you yesterday. So sweet. I'm guessing these are from their garden at home in Northern California. Dahlias are my favorite flowers. Pretty, huh? 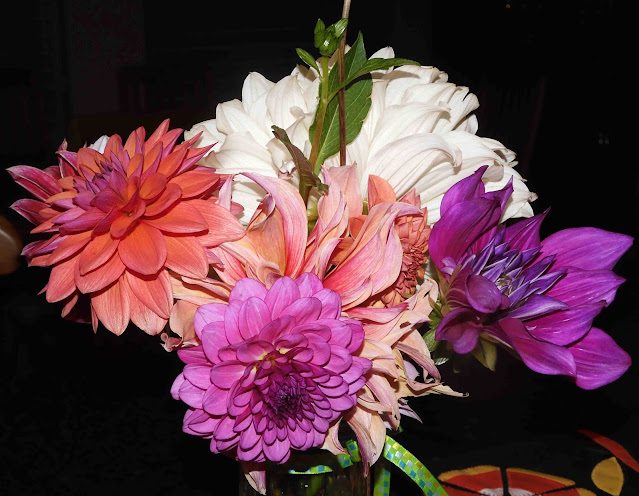 Okay, so that was a nice surprise for the day. Back in the sewing room after they left, I finished fusing the applique for the Dancing Chickens and Flying Pigs block. 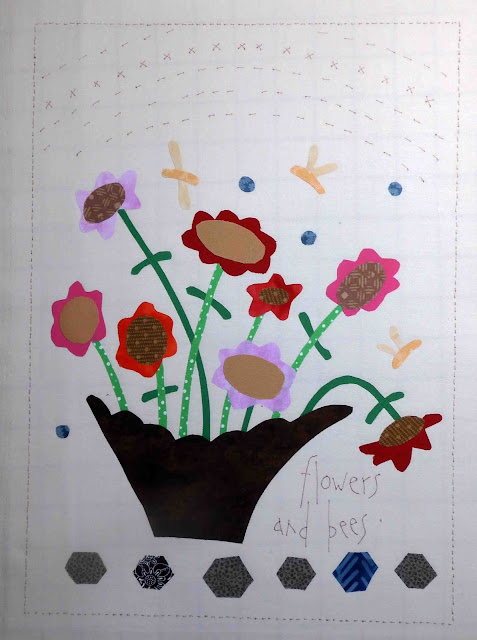 Sadie has an opinion about this quilt.
Whoever heard of dancing chickens and flying pigs. That's purrposterous. 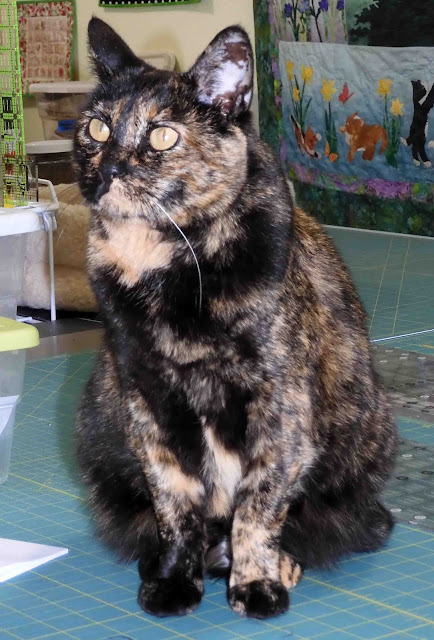 She fails to recognize that some people might think talking cats are purrposterous.
The top-stitching is nearly finished now. I just need to go around a few more pieces. Top-stitching all those skinny green stems was an exercise in tedium. I probably spent at least an hour just on that section. When I stopped for the day, it was needle down, ready to go. 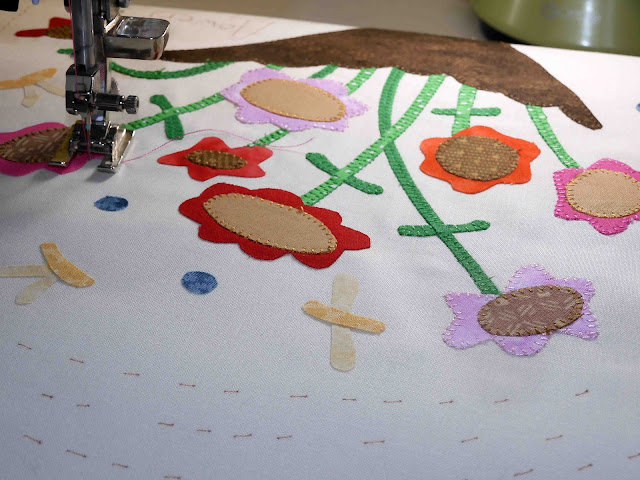 This morning, I finished stitching all the flags on my  embroidery piece. 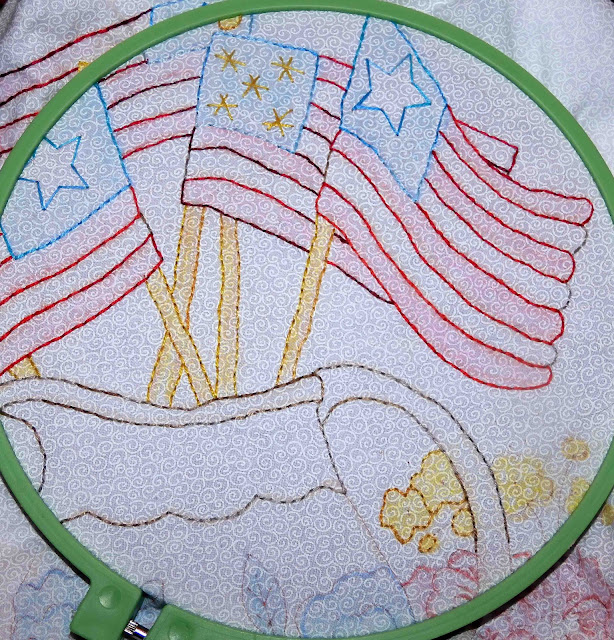 Now I'm very close to finishing this off. It's a good thing I'm nearly ready with the Dancing Chickens block. 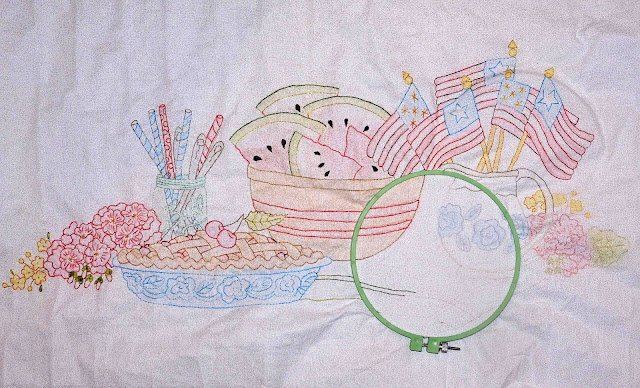 Today we're making a short grocery shopping trip...meaning the list is fairly short...not the usual 50 items we're usually hunting down. After that, I'll get back to my sewing. It shouldn't take long to finish with the Dancing Chickens block, and then I'll get on with another row of blocks for the City Bank quilt. If I'm feeling really energetic, I might even do some housework.
Posted by Barbara at 7:52 AM

Say what you want about aging, it's still the only way to have old friends. ~ Robert Brault

Ah, there's a beautiful song called Old Friends by Kenny Rogers and Dolly Parton. Do you know it? I guess there's still a need to get dressed in the morning, even if it's still bra-less! Covid has brought out the sloth in all of us I think!

OK, so what's the 1862 joke? My grandmother was BORN in 1884 and I know you're not THAT old, lol. Anyway a nice surprise for you to get the visit and the thank you.

We have no cell service on this mountain so the land line is a must. Most of the calls that come in are not for us so I pretty much ignore the phone which has proven to cause problems and I must mend my ways.
Be well and stay safe.
xx, Carol

1862? Wow, you're all so remarkably well-preserved!!! So nice to have a visit from long time friends even though it was a short one.

Wow. I am of two minds. First, wow, how fun to have visitors! But second, how on earth did you recognize people you hadn't seen in so long? I didn't even recognize my step daughter on her recent surprise visit until she took off her mask! I would have been at a total loss. Then again, I guess it speaks to how young your friends have remained since they must look a whole lot like they did 20 years ago!

How fun to have surprise visitors pop by and give you such beautiful flowers. Very nice surprise and sounds like you had a wonderful day.

How nice a surprise if only for a few minutes. I actually got brave and went out to the hairdresser for a cut and style.

How fun to see old friends, even if for a few minutes. My Guy gets pretty aggravated with all the nonsense calls on our cell phones. It makes it hard when we are waiting on a call back to do with some type of service, especially if it's a service guy coming from Tulsa, it's hard to know do we answer it or is it a telemarketing call.

How fun to have a visit from friends from years past! I don't usually have friends who stop by, so I'm usually in grubby wear, no makeup, etc. 1862, huh? Hahahaha. Thanks for the chuckle.

That certainly brightens up one’s day to have old friends stop by. Being dressed was a bonus. We ignore calls, too. On our land line there is an answering machine so I do keep an ear out if a message is left. Most do not leave messages. Of those who do about half are people we want to talk to.

You are working it in your sewing room. Yesterday one bowl cozy done and patternwork on daughters cow pajama bottoms.

Yes, I no longer get up to answer the phone. If they know us, they can leave a message and we'll call back. I hate all this junk phone calls, just like junk mail!