As I came upstairs to write this post, I noticed the moody sunrise sky. 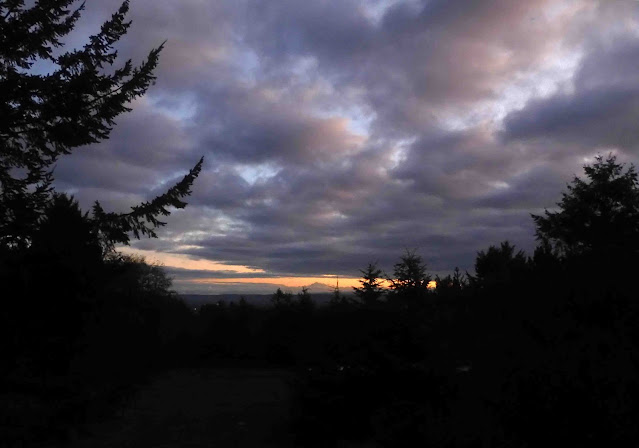 The sky looked like this yesterday morning as the sun came up. Eventually, the clouds burned off, and we had a nice sunny day. It was a little on the chilly side until around noon. I had in mind to do some yard work, but I wanted to wait for it to warm up a little.
The day started with a Halloween mask using these two fabrics: 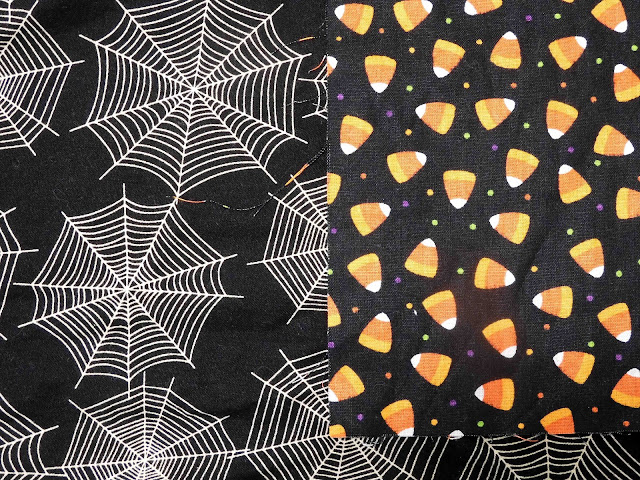 Sadie was glad I'd seen the light...or maybe I'd seen the dark. It's hard to know what she was thinking, but she identifies with the black cat in herself. She thought I'd made a terrific error in judgment by not making a Halloween mask before this.  #blackcatsmatter 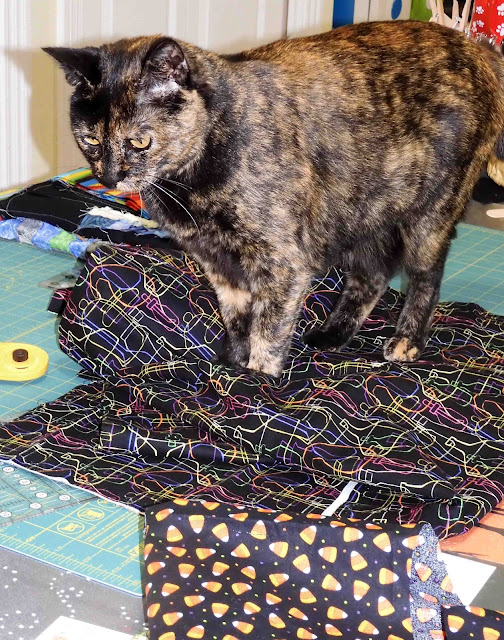 Let's all just hope this mask will only be worn for one season. I wanted it to be reversible, and so I had to do the anti-fogging wire a little differently from my previous masks. I'm using double-fold seam binding for these. Usually, I just sew it to the lining of the mask. For this one, I first sewed the top seam of the mask, then opened up the two fabrics and put the wire channel inside. After threading the wire through, I continued on to completion just as I always would. 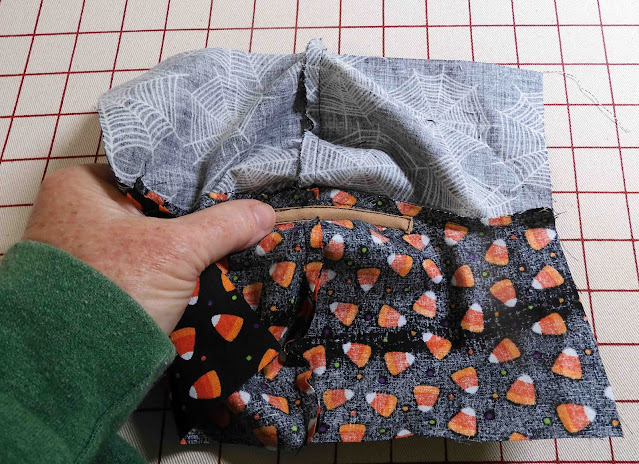 Now I have essentially two masks in one: I can have candy corn...

Or spider webs. It all depends on whether I want to be sweet or scary. Which one do you suppose I'll use while grocery shopping?

When I had that finished, it was warm enough to venture out. I took a little walk around the house to see what was what. The first thing I noticed is that the purple poppy is still blooming. Its little flower stalks are sparse, but I'm guessing it has put out about 50 flowers over the season. 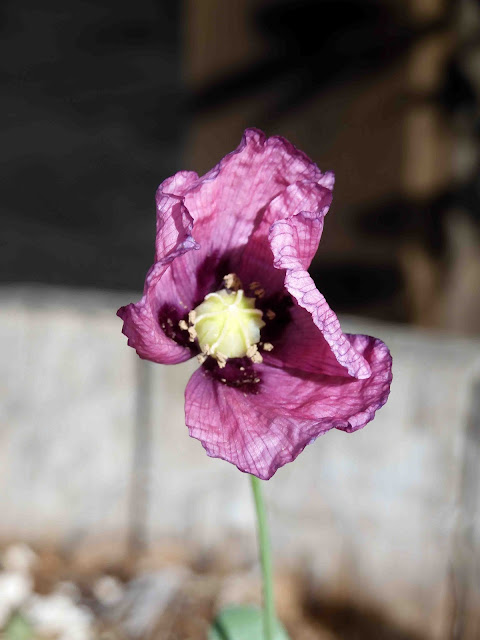 This one is just about finished, but you can see there are still buds coming. If the overnight freezing weather we're expecting can just hold off a little while longer, there should still be some blooms coming. 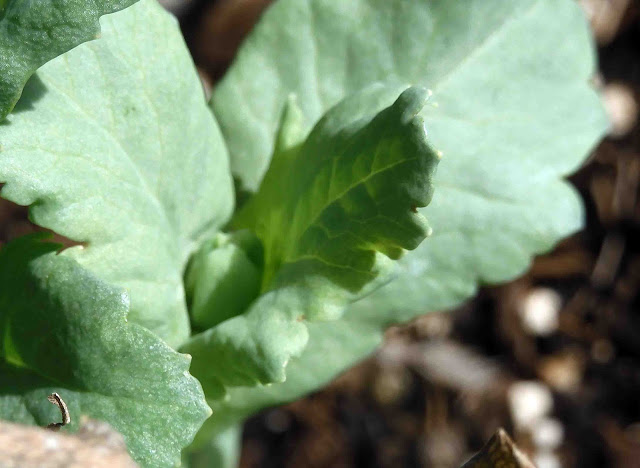 Our leaves are only just beginning to change. Just the tips are turning on this Dwarf Japanese Maple. 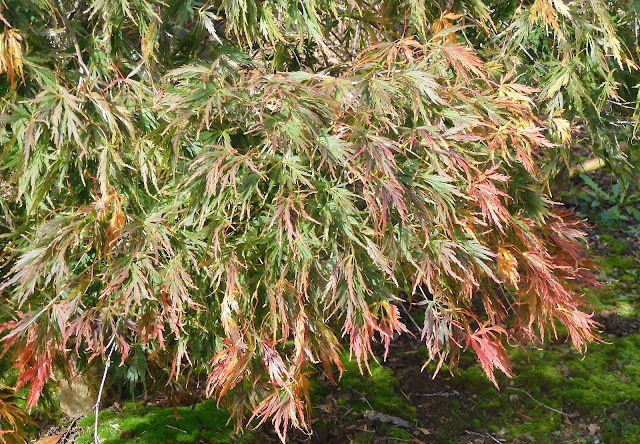 The larger Japanese Maple is beginning to turn too. This one will be flaming orange before it's finished. 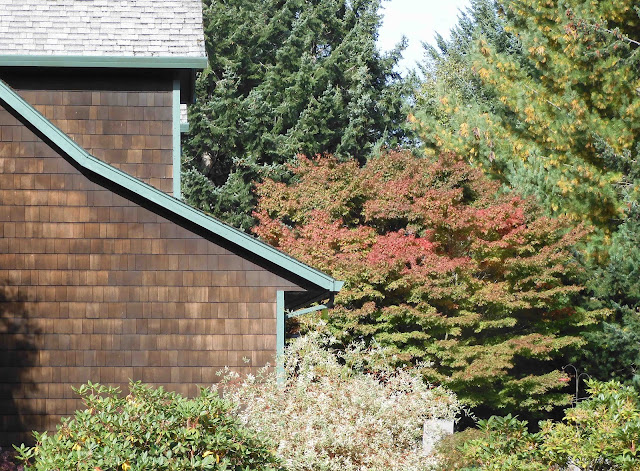 Looking out across the field, this big maple has lost most of its leaves, but there are still a few red ones at the bottom. 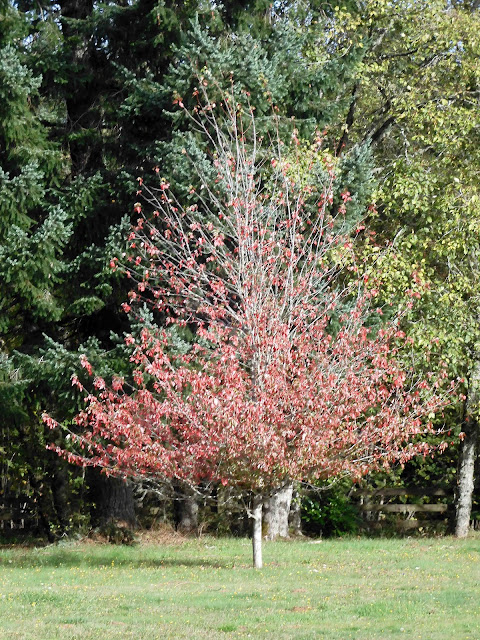 Here's a crazy sunflower coming up at the edge of the driveway. The squirrels planted it there. It's a little late to the party, but maybe it still has some time to bloom. 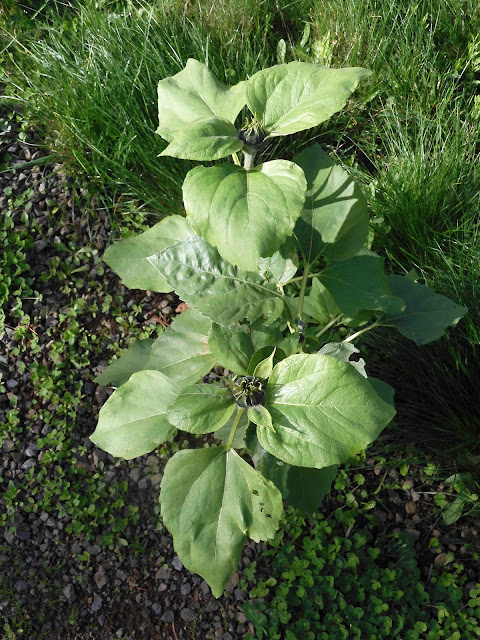 So the object of my desire for the day was to cut back the peonies. They still had some life in their foliage, but I decided to go ahead, rather than do this job in the rain. There were large red buds near the soil's surface, which would be next year's growth. 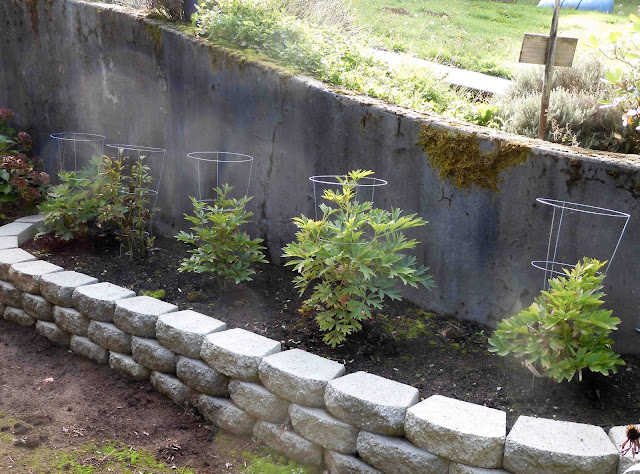 Also, I wanted to whack back the culinary herb garden. You can see the lavender and the thyme were growing out over the sidewalk. I felt kind of bad cutting back the lavender. The bees were still buzzing around the bloomed out flowers. 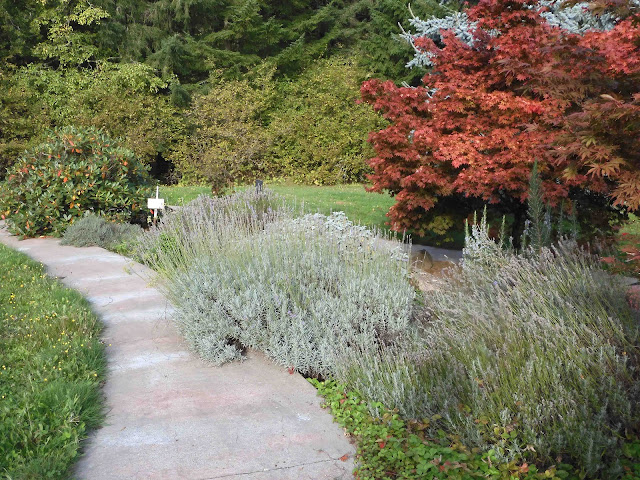 This past spring, I cut this huge sage back to half the size you see here. It prevented the chives from seeing the sun last year, and almost no chives grew. In previous years, there were so many I started wondering if I'd have to thin them out. So it took the sage almost no time at all to return to its previous huge size. I cut that way back again. Also, near the bottom of this image, you can see some Italian parsley. The parsley didn't come back this year either, and so I'd replanted it. When I went to cut the sage back, I discovered parsley coming in like the worst kind of weed. I dug out all but one of the plants. Honestly, I don't need that much parsley. Sheesh. 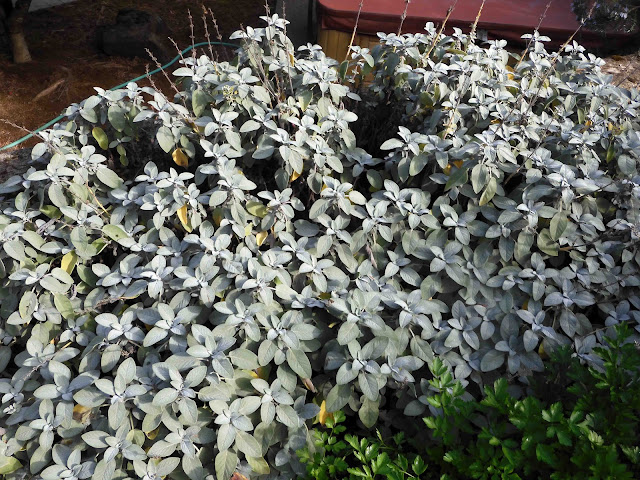 When I was all done with my slash and burn gardening, I had a big pile of cuttings for Mike to pick up with the tractor. Smitty helped in this effort by throwing all the clippings on the pile as they were generated. He's a very hard worker. 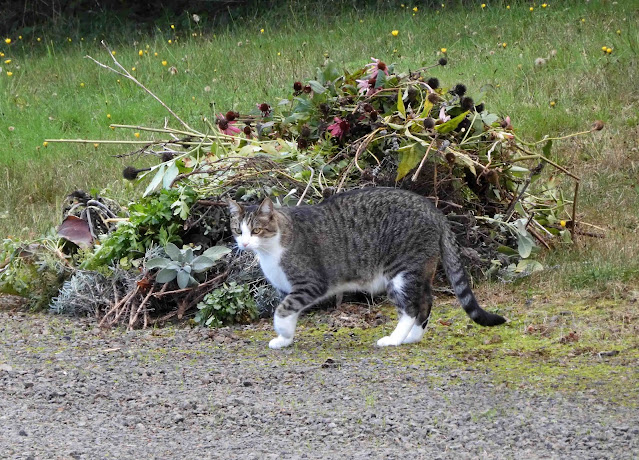 My final garden effort was to harvest the last of the tomatoes from the greenhouse. Now the water is turned off, and they are done for the year. Thank you, tomatoes, for an excellent season. 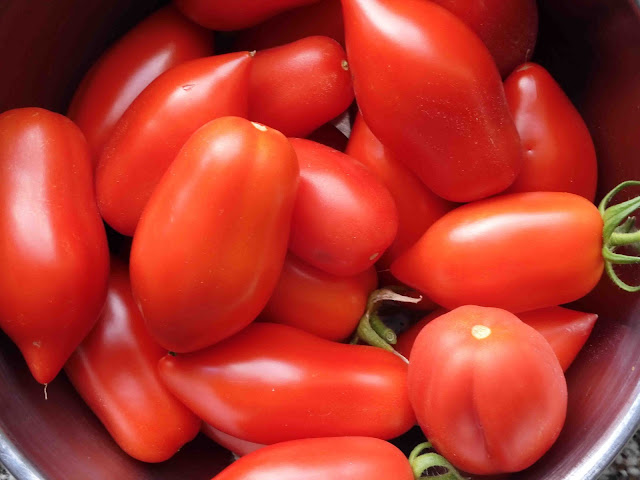 Okay, so we had some lunch, and then I got to work in the sewing room. I made the quilt back for Waste Not Whatnots, and then I started making the 9th block for Dancing Chickens and Flying Pigs. This is the picture from the pattern. The original quilt was done in wool, but I'm using scraps from my stash. 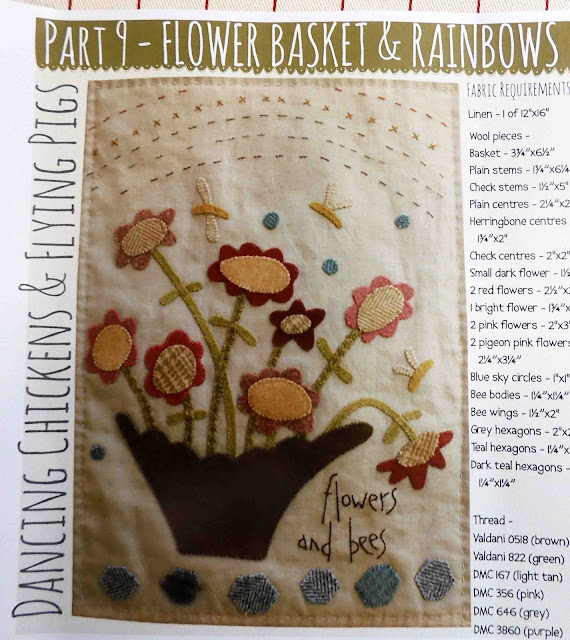 Smitty was protecting my other projects from the wicked feather toy. He earned his kitty keep yesterday. 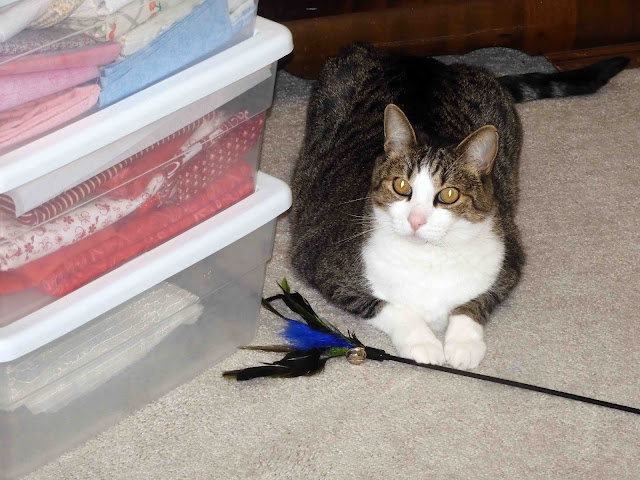 When it was time to stop, I had most of the applique finished. There is still a little more to do, and then it will be ready for top-stitching. 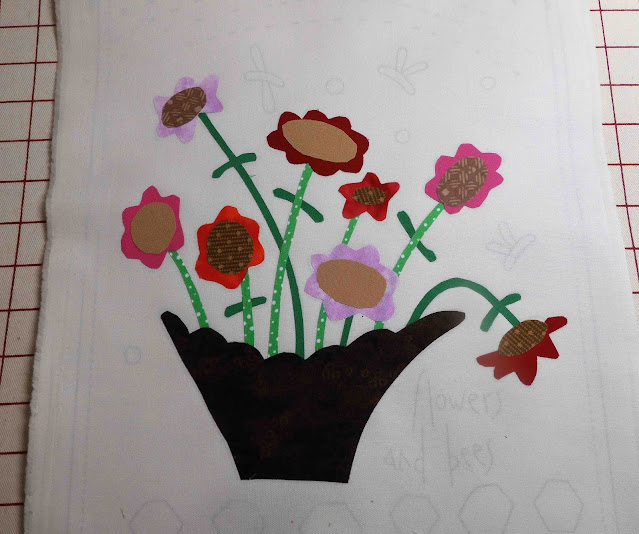 I'll get back to it today, and I'll hope to finish the top-stitching. When it's finished, I really am going to make the next row of blocks for the City Bank quilt. There are a few housekeeping items to take care of, but mostly, I'll be sewing today.
I've been looking for a way to include more physical activity in my day, and so I'm going to try committing to taking a short walk after lunch. It's an easy commitment when the weather is good...not so much when the winter rain comes. The sunlight will do me good, and the exercise won't hurt one bit.

I like gardening. It’s a place where I find myself when I need to lose myself. ~ Alice Sebold

I think I need a little lie-down after reading about all that you accomplished (with Smitty's help). Those tomatoes look so good - I bought some cherry ones at the store and had some for a snack with my afternoon coffee. Yum!

Beautiful tomatoes, nothing beats the smell of fresh tomatoes gathered from the vines. Mind you, the scent of lavender is also a great favourite of mine, we have two pretty bushes in bloom at the moment.

I always feel a little sad at the end of tomato season. There are still a few green tomatoes on our plants and just a couple of days with sun would see them ripen. I live in hope. I also need to cut back our sage and lavender, if tomorrow is dry it will get done then. The leaves on our crab apple tree are clinging on for dear life and haven't yet even considered changing colour.

our trees are about bare and snow is in the forcast. My CSA delivery friend is ending his 'route' this weekend so guess the crops are at their last. Cute little new project.

Meanwhile, we had to turn on our AC as it got SO hot and humid last night--dense fog everywhere--and still here this morning...
everything is so still --where oh where are those cool, crisp Autumn days I ask you????;000
Your flowers are so cute on that DC/FP's block...
Hugs, Julierose

Your herb garden really took off this season! You really do have lovely grounds around your home. Those lovely tomatoes look so bright and cheerful. Today, I'm back at Gypsy Wife; I paused yesterday to do a pattern test for a friend.

Beautiful foliage and pictures. Those tomatoes look so fresh and good! It has been so hot and humid I have had to lay off my walking the last 3 days. BUT tomorrow I will get out and sweat and hopefully the weather will cool off for the week end and then on Monday it will really be nice - think in the 50’s in the morning - my kind of weather! Enjoy your day!

OOPS - I really like that block. Are you using wool? I have never used wool.