We got through our grocery shopping trip without too much trouble yesterday. I'll never forgive my grocery store...one of those mega marts...for moving the cat food to the far end of the store. It's their way of forcing pet owners to walk through the whole store, presumably picking up non-list items along the way, before they can finish their grocery shopping. Walmart does this too, and that's only one reason I dislike Walmart. Anyway...we didn't need cat food yesterday, and so our mileage was less. And this begs the question...why move the pet food? Why not move, say, the candy or cleaning supplies? Why are only pet owners singled out for this extra grocery shopping insult? (Shakes head in disgust.)

Okay, so back home and in a better mood, I finished up the top-stitching for the ninth Dancing Chickens and Flying Pigs block. This one is called Rainbows and Flowers (I think). 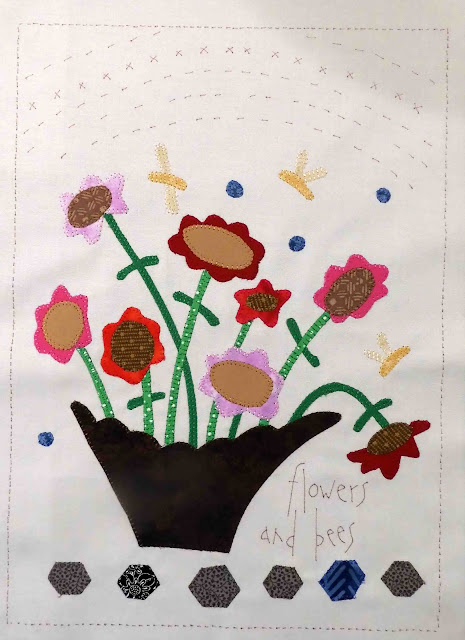 It has almost no embroidery on it, and so it won't take long to finish it once I start stitching.
Also, I made another mask for Mike. He let me do something with a little more pizzazz in the form of this Corvette fabric. He has a 2001 yellow Corvette, and so I chose the yellow car from the larger yardage. 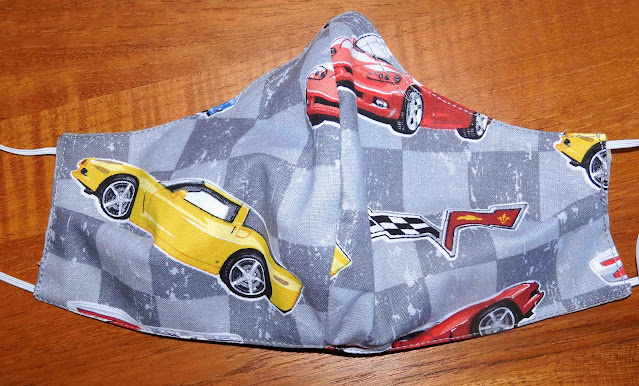 He prefers the straps that go all the way around the head, but he needed one with ear pieces he could wear when he gets his haircut. He usually only wants something plain and boring for his masks, but he consented to the Corvettes this time. Such a wild man, I'm telling you. Maybe it's permanent retirement that has allowed him to run amok.
With those two things done, I made good on my pledge to sew another row of blocks for the City Bank quilt. It has 7 rows of 6 blocks. The original pattern is all done in blues and greens, with the exception of one "lavender" block. I was going back and forth about whether to add in something from the purple bin. I'm making this quilt as a way to use blue and green scraps. I'm running out of appropriate blues and greens in a large enough size, however, and so I took my own walk on the wild side yesterday by adding in one purple block. I kind of like it. Maybe I'll add in a few more purples. 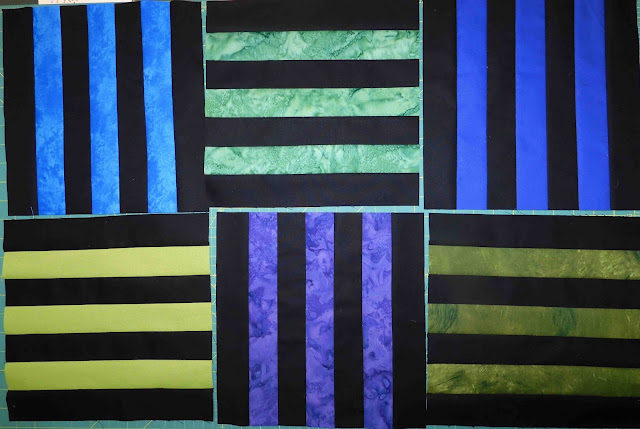 So I have four rows complete now. Here are all the blocks I have so far. 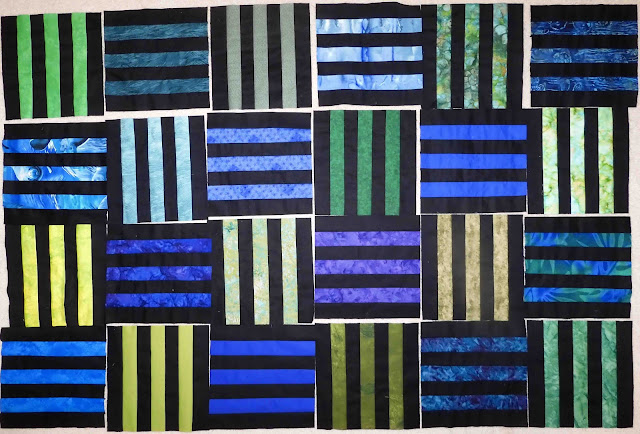 Today I'll make the next block for the Ties & Tails quilt. I've made this cat before, but this time, the bird will be facing the opposite direction. This is the picture from the pattern cover...sorry for the blur. I think this is a Sadie cat. 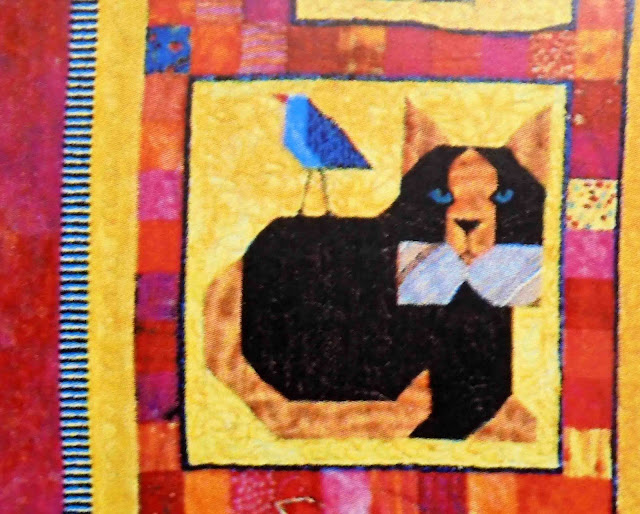 So that was all the sewing I did yesterday. For dinner last night, I tried this recipe from our diet for Spiced Meatball, Butternut, and Tomato Stew. This turned out to be a delicious and hearty choice for a chilly autumn day. 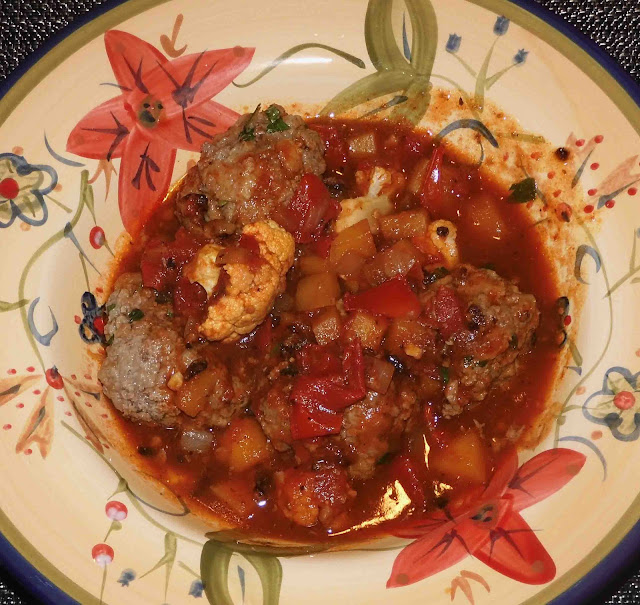 The meatballs are made with bread that has been cubed and then soaked in some low-fat milk. It gave them a nice soft texture that I liked. They are supposed to include some finely chopped cilantro. I thought I had some in the vegetable crisper, but when I found it, it had taken on the appearance of a failed science experiment. No worries. I substituted fresh parsley, and that was just fine. It still had plenty of flavor without the cilantro. I'll stick with parsley in the future since cilantro never lasts very long in the fridge. And I know some people really dislike cilantro, so no worries, you guys. Just use parsley, and it'll be great. It also gave me a chance to use some of the tomatoes I've harvested.
Okay, so today, I really must do some housework, but that won't take all day. If the weather holds, I'm going to force myself to get out for a walk. I think if I can get over the hump, I might actually enjoy a short walk. 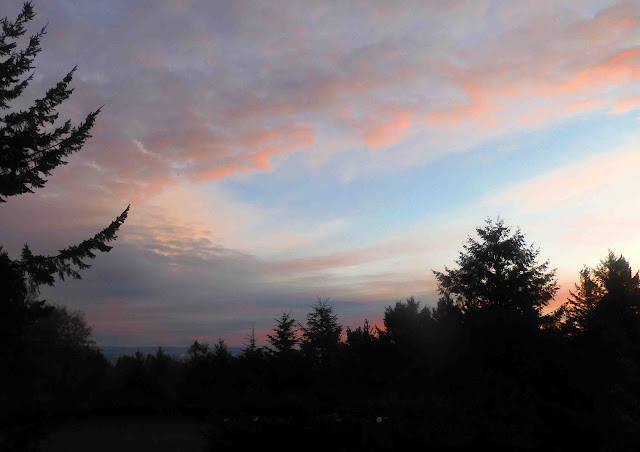 There's a 60% chance of rain today, but this morning's sunrise is looking like we could actually see some nice weather. I know some of you are seeing snow already. How's the weather where you are?
Posted by Barbara at 7:47 AM

Supermarket automatic doors open for me; therefore, I am. ~ Craig Bruce

Oh I hate when supermarkets "re-organize" and move everything..means your list (which I write in order of the aisles--a bit OCD, but otherwise I'll forget things!!)--you go in armed with your ordered list and --NOPE--you have to re-learn the store's layout...aaargh!!
Especially now with the on and off availability of products...
and the one-way aisles--don't get me started!! ;000

I'm down to one geriatric cat with particular tastes! I used to purchase all of her supplies at one of the Pet@#$ chains. Since all hell broke loose this spring I've been ordering everything (food, litter, snacks)through Chewy. I have it set up for auto-ship. Has worked like a charm!
I'm a few years older than you and am on my own. I work hard at limiting my exposure and don't go anywhere unless it is an absolute necessity. Buying FLuff's supplies online is a big help with that.

Your hubby sounds so much like mine. "Just make it black"...BORING! As for stores...well...I work in one and let me tell you that the folks who work there are no more impressed with the decisions from corporate to move everything every other week than shoppers. We never know where anything is and then shoppers are frustrated at us! Never mind time spent moving everything 3 pegs to the left... But why pet food is so far from the door is a mystery. I'm all for putting something like underwear (at large stores like Wally world that carry such things) back there! So I just try to buy way too much when I'm getting my other groceries to avoid extra stops! (Great advice for hindsight, right?!) Just keep quilting and you'll get your sanity back. At least that is my hope!

Our grocery store has the bread, milk and eggs in the farthest corner from the front door they possibly can - drives me insane. Don't have a clue where they hide the cat food because I haven't needed any. I read once that it's a marketing ploy they utilize to force people to notice things they wouldn't normally (and of course buy them!).
As for DH's and masks - I get where you're coming from. Resident Chef always wants boring too. For years he only wore blue and black and for a change black and blue. I've finally convinced him that maybe a little purple or green might be okay but it's been a 42 year battle.
We've had a lovely day here - sunny and quite warm. Better enjoy it because it's not going to last.

It's a non-food (people) convenience item. Made me think and our stores have them toward the back with the cleaners, soaps, and paper products. And like Julie, I make my list to follow the store's aisles - quick in/out.

Thank you for such an enjoyable read and my first smile of the morning. I can relate to the stores and the husband. ^^

Hi, I've been enjoying your posts for a while now and kept meaning to leave a comment. You have inspired me...last year I was on a quilting frenzy because it was the only way I could deal with my only sibling's illness and death. This year so far I hadn't done any...until yesterday...I dug out all of my UFOs and finally sat down at the machine to sew the binding on(the rest to be handsewn). Thank you for your voice being out there...You are read and you are appreciated. :)
In Pennsylvania right now...foggy in the mornings...gets up to 60s-70s. I'll take it...

Ah, the grocery store switcheroo. I shop at two different supermarkets (not Walmart). One of them completely rearranged the entire store last winter and I still can't find things or have to backtrack because I go to the area something used to be. I've never liked grocery shopping (or any other kind for that matter, well, except for fabric). Now, in the age of Covid, it's even more stressful, but, at least here, people are still wearing masks. We hit 79 degrees yesterday, a new record, but it's 49 degrees now at 11 AM and that's as high as it's going to get. Our season of gloom and gray has started and will last until next April and I won't even get a break in FL this winter. Maybe I'll get lots of quilts done, instead, ha.
Pat

We have been using curbside pickup or having Walmart deliver to the house all year. Walmart does not charge extra, but our ONLY SATX store is HEB. We have a store in LV where we live and they tack on 3% on our groceries just to do the curbside, but it does save me the time and energy and keeps us away from the Virus.

But I completely understand your frustration. Mine is that they only carry 25% of the brand names I like and they love to sell only the smaller quantities so you can pay more for the luxury of not having to drive to SATX.

When the Virus is dead I am going back to SA to get my groceries... or continue on with Walmart.com deliveries. They do great and prices are better.

My local Ralph's move things around about every six months. But, since ince I now do pickup instead of going shopping myself, it no longer bothers me!

I do not find it amusing at all when the grocery store rearranges so I have to go on the hunt for almost everything and relearn the aisles. I mean, c'mon already. That's a great mask for Mike, by the way! We spent the day helping our daughter clean her place before we move her home this coming weekend. She's is so organized, it really wasn't that much work, but I'm still tired!