We managed to get through the grocery store yesterday with a minimum of teeth-gnashing. Our list was long, but it was at least half produce. Once we finished gathering up all of that, the rest was pretty easy. When we got home, it was lunch time, and then...time to sit and stitch. Sadie helped with that. 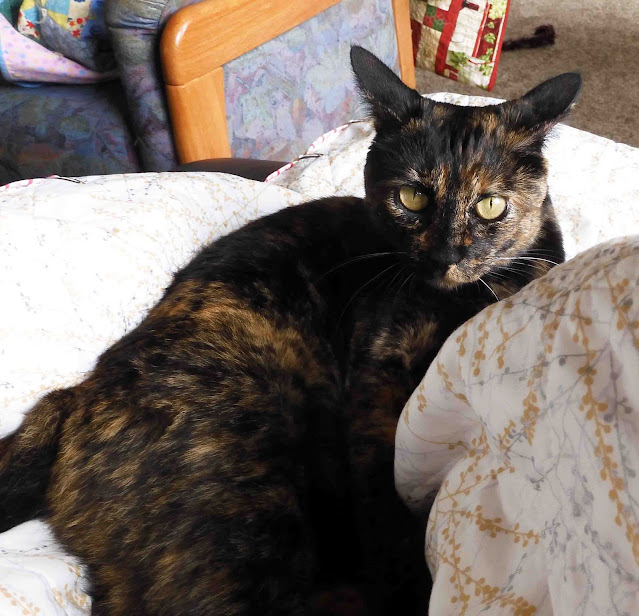 She's still not sold on the candy-stripe pink binding. We have to be careful with Sadie. She's such a tiny thing, we sometimes resort to calling her names like "Sweety Petitey," and she finds this extremely offensive. She insists she is not sweet, nor petite, and in fact, she lived as a homeless cat, raising kittens on the street. There's nothing "sweet" about her hard-scrabble life. In fact, she's thinking about running for purresident in the next election. Obviously, her candidacy would be historic. And all of that to say that pink is not her color.

So despite her purrotest, I managed to get around the second corner of the quilt. I was just inches away from rounding the third corner when I stopped for the day. Hopefully, I can finish it up today. 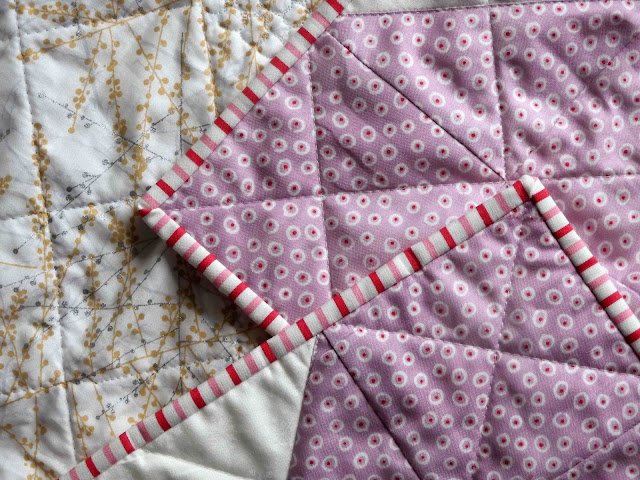 While I was stitching I was thinking about the approximately three bazillion bonus half-square triangles waiting for me downstairs in the sewing room. As I've mentioned, I have them in all sizes, colors, and "genres." Pinterest has given me a lot of ideas, but most of what I find there has some sort of theme or consistency to the configurations. I'll be hard pressed to come up with anything like that in mine.

So, excuses aside, I started with the 1-1/2 inch pieces. I have hundreds of them. Some are half square triangles, some are 1-1/2 inch solid pieces left over from some of the mosaic quilts I've made. So this first one was an attempt to follow an image where they were sewn together to look like hard candies. This probably requires stealing an image from Pinterest, so let me see if I can do it while giving credit to the original...hmmm...so this first idea originally came from Moda Bake Shop's Peppermint Candy Quilt posted back in April of 2018. It's actually a pretty cute idea. Here's the image I found on Pinterest: 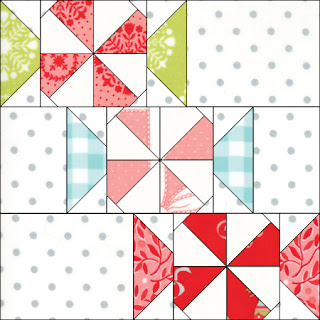 Mine loses something in translation, and I didn't even bother looking at the original. I just used the scraps I had to try to mimic it somewhat. Then, I realized I had 7 pieces across, but only 6 down, and so I used one of my scraps across the bottom to square it up. It ended up at about 7-3/4 inches. 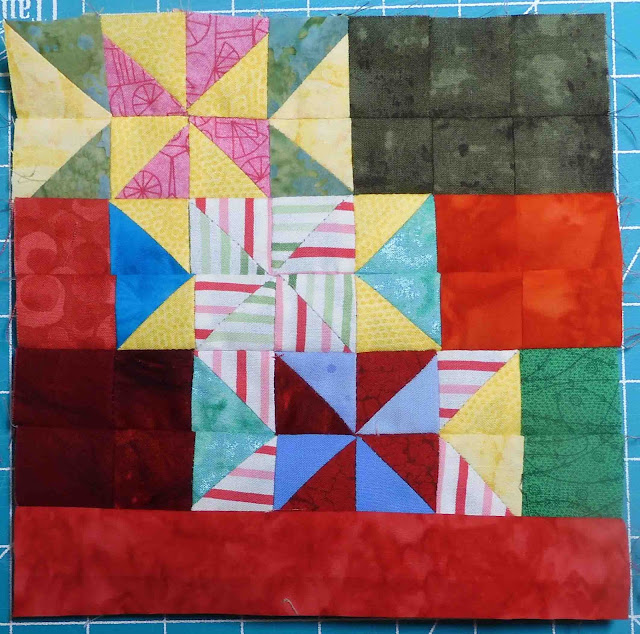 And I just continued on with this size until I'd used about 3/4 of them. This one worked out pretty well...nothing fancy... 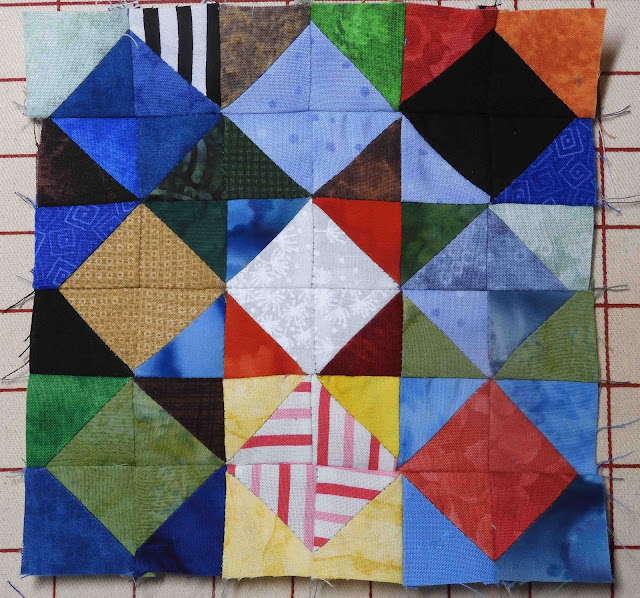 And then I used some of the same-colored ones to make this block: 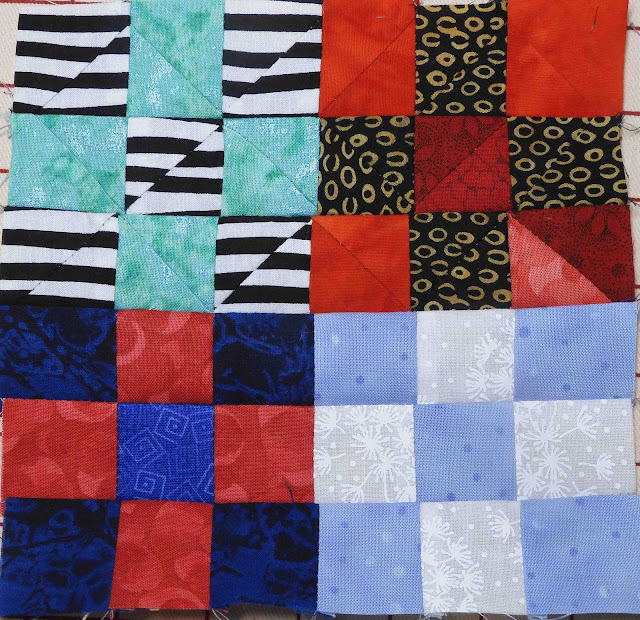 Each of those two above ended up at 6-1/2 inches. By then I was getting tired of working with such small pieces. I had four of these 3-inchers, and I sewed them into a pinwheel. 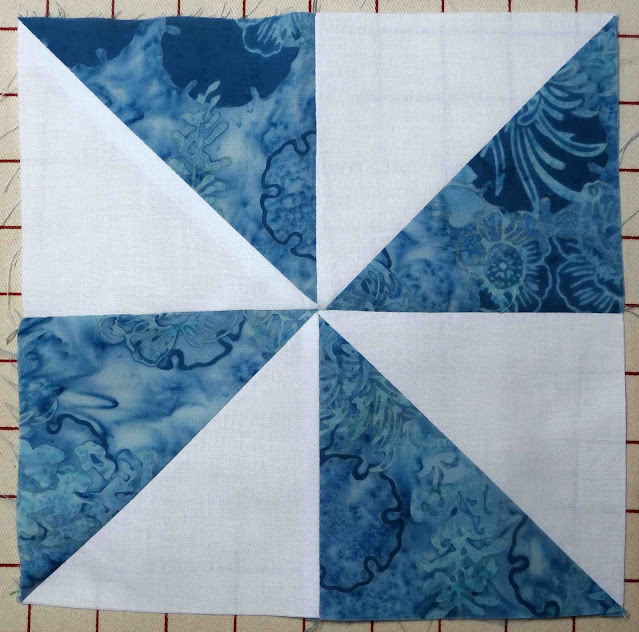 Then I had this piece. These were already sewn together from 1-1/2 inch pieces. I still had a bunch of solid pieces left, and so I started adding to this one. I'll just keep going with it around and around until they're all used up, but I was only getting started when I quit for the day. 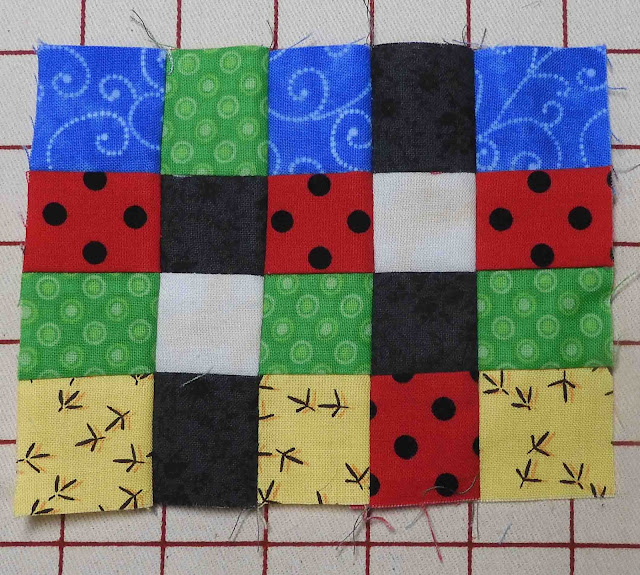 So I have lots more of these in different sizes, and I'll just sew them together in different configurations. Then, I have some ideas about how to incorporate them into a quilt top. It'll all come together in the end somehow.

There was no kitty help for any of this. I went in search of Smitty, and then remembered he was fully involved in a photo shoot for his Sexiest Mancat Alive spread. You can look for it in the next issue of Cosmeowpolitan magazine. 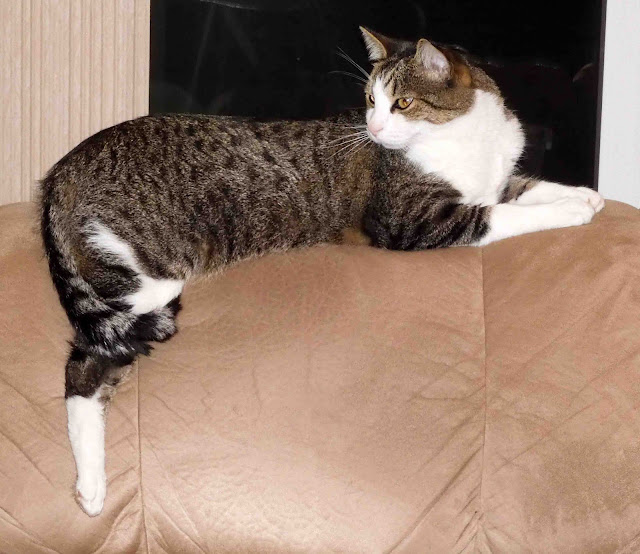 So I'm not sure I'll get much sewing done today. I need to head to downtown Portland again this afternoon for a routine visit with my dermatologist. Regular visits to a dematologist are the cost for years of competitive swimming in Hawaii and Southern California followed by more years of life-guarding. We didn't have good choices for sunscreen back then, and fair-skinned people like me are paying the price for it now. Next year, I'm going to schedule these appointments more carefully, so I don't end up with them one on top of the other.
Posted by Barbara at 7:50 AM

As anyone who has ever been around a cat for any length of time well knows, cats have enormous patience with the limitations of the humankind. ~ Cleveland Amory

Happy that you made it through the grocery run unscathed!!
Finally more significant rain here today--
I was able to finish sewing the last border on both dolly quilts and begin the backing.

I would vote for Sadie. She seems adaptable, industrious and brave. And hearing your grocery store laments, I remember mine. There used to be a time I didn't mind them. But with the empty shelves and paranoia/rudeness surrounding the pandemic, I dread my weekly visits. (Also, when did food get so expensive?! Okay, I know...) Yet I remind myself that once it is over, I have the skills to feed the hubby and myself at home and not rely on others to prepare my food safely or wear their masks properly, so I can stay home for a while again. (Though a meal out is a nice break, too, particularly after staring at an angry pile of bonus half square triangles that refuse to talk!)

Every quilt I've made so far, and of course there have not been that many, have been scrappy quilts. I've never planned ahead with either pattern or fabric, because I managed to accumulate a lot of fabric before I had any idea what to do with it. I won a lot of it, I couldn't resist buying some of it, then when my first quilts were quilted I had extra backing to add to the stash. It is part of the fun for me, going from 'gee that's kind of pretty' to 'wow, a quilt.' Someday I want to make a grown up quilt like you do, but there is still SO much fabric to scrap away. As for Sadie, I get it. It is hard to give into softness when you have had to be strong and tough for so long. Girl's gotta stay vigilant. I hope someday she can relax into her pink side; she seems to get closer to it every day.

I love scrappy quilts so I looking forward to seeing what you create from the half square triangles. From what you've shown us it will be a fun top when complete.

Sadie is a feisty feline - would she approve of that? That look on her face cracks me up. Looks like you are having fun creating with those HSTs and other little pieces. My challenge quilt is done (squee), all except for the binding. One more deadline project, and I'm set free! Woohoo!

I've been pondering what to do with the gazillion bonus triangles I've accumulated, all different sizes, and not necessarily normal sizes. But then I've been pondering what to do with all the fabric I now possess, both scraps and yardage and it's exhausting. But I don't think I can stretch out on the top of the love seat like Smitty and I certainly wouldn't look as fetching, if that's a word that can be used to describe a mancat.
Pat

Love your scrappy blocks Barbara, cannot wait to see the final product. What gorgeous cats you have! They are just beautiful.

My grandma made quite a few scrappy quilts. Somehow she was able to make them sing in harmony. I like following your thought process as you develop your quilts. In general, you make each quilt sing it’s own tune.

I'll be checking the newstand for that edition of 'Cosmeowpolitan' - I do hope Smitty will be the centre spread! I think your new quilt is going to be fabulous. So many wonderful different fabrics!

Your hard candy blocks do not have the snowball corners. Is that intentional to make it your own?

Lots of fun colors and fabrics in your scraptastic blocks!