It rained most of the day yesterday, as it will for the next few days. It was a perfect day for slow-stitching. First up, I finished the section of the embroidery hoop I was working on. 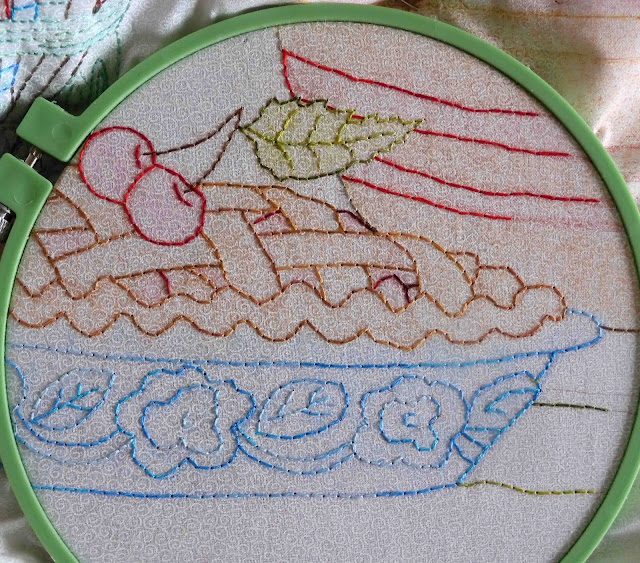 Now I've moved the hoop north to encompass the watermelon. I think this would have been better stitched during the summer. With such wet weather, the idea of watermelon just makes me sad for the long winter that's coming. 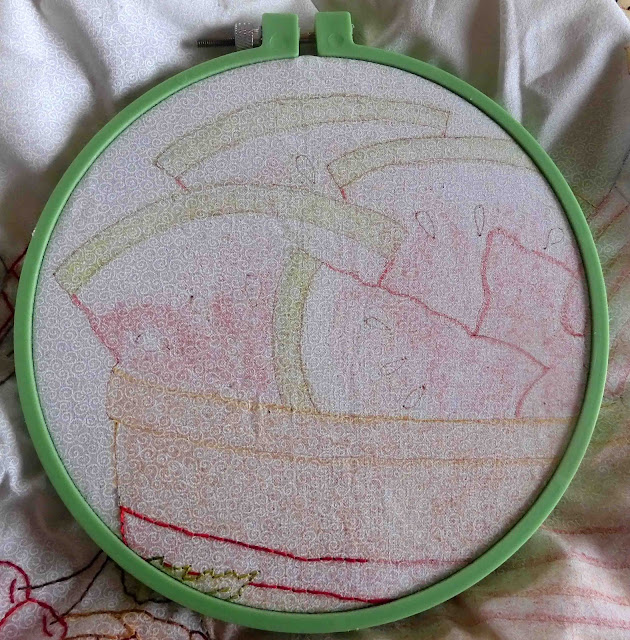 Not to worry though. I just snuggled up under the Snow Globes quilt and went to work stitching the binding. Now I've turned the first corner. 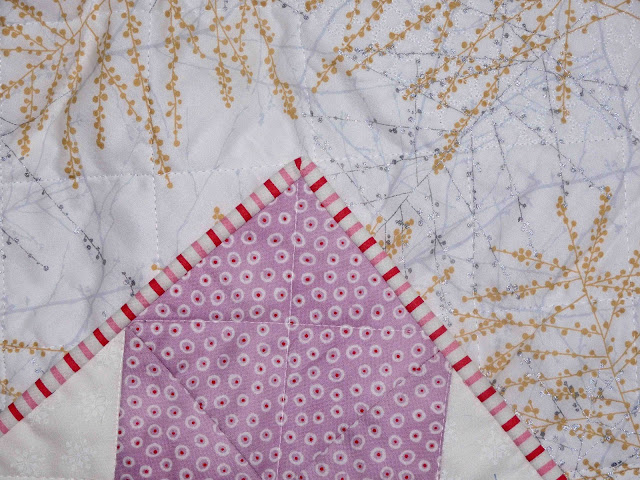 Don't you love a quilt that's large enough to snuggle under while you hand stitch the binding? Slow-stitching at its finest. I was still in my pajamas at noon. And, honestly, isn't that the best kind of day? So when I finally got over my slovenly ways, I headed into the sewing room.
It's true I said I was going to make another row of blocks for the City Bank quilt. But then I took a look at my white board to remind myself of my October goals. My goal for each month of 2020 has been to finish quilting one large quilt, finish quilting one small quilt, and sew one set of blocks into a flimsy. This "one set of blocks" goal has included my "trashy series" of quilts made from bonus triangles and other cut off bits from finished quilts. Already I've accumulated yet more bonus triangles, and so I decided to work on those instead. 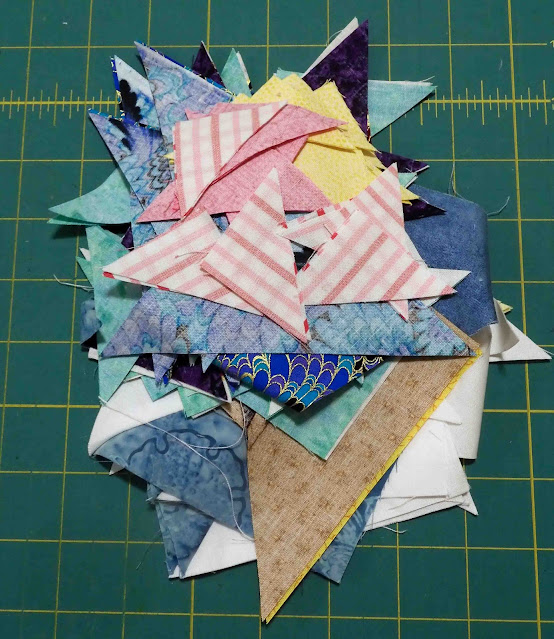 Some of these are cut off triangles from sewing binding strips together, and so they were matched sets. I decided to divide them up so that each half of the half square triangle was different. Now they're all sewn together, and they are a mostly mismatched bunch of different sizes and different "genres" of fabric. I have in mind to sew the same-sized groupings into different kinds of quilt blocks, and then sash them together into a single quilt. The name of this quilt will be "Waste Not Whatnots."
I was just about to give credit to Benjamin Franklin for coming up with the phrase "Waste Not, Want Not," but then checked with The Google just to be sure. According to The Google:

This adage was quoted—and perhaps coined—by Maria Edgeworth (The Parent’s Assistant, 1800), who wrote that those very words “were written over the chimneypiece . . . in his uncle’s spacious kitchen.” It was widely repeated throughout the nineteenth century, but has been heard less in the current throwaway society.

So there you go...another myth busted. Did you think Benjamin Franklin got the credit? This being the stupidest holiday of the year, Columbus Day, seems like a good day to be busting some myths. And, nothing against Columbus, but really...why do we celebrate him? Couldn't we just as easily celebrate, say, Vasco da Gama? And when you think about it, Columbus was one of those men who refused to ask for directions. He was looking for India, but he got lost and ended up "discovering" North America. And since North America was already inhabited, it was hardly "discoverable" by Columbus who just happened to bump into it. On the other hand, Vasco da Gama actually did find India. I rest my case.
Okay now that I've had my little rant, perhaps I'll be better behaved in the grocery store today. We have a long list, which is at least half fresh produce. Fortunately, the produce section is the first stop on our path through the store. Except for that, it'll be all sewing all the time.
Posted by Barbara at 7:33 AM

A ship in harbor is safe, but that is not what ships are built for. ~ John A. Shedd

My home calendar lists today as "Indigenous Peoples' Day", which makes more sense to me than Columbus, that bully, if we are going to celebrate something. We mostly call it "no mail day," a sad event for those, like us, who get excited at every letter and package. It is cold and damp here, too, with vegetable beef soup simmering on the stove.I need to learn to do a proper binding match, my trianges are not so neat as yours, and neither are my strips.

Your picture stitching is lovely--yes, sad that watermelon season has come to an end...It is cold here today only 41 early on and raining and gray..damp. That being said--I hope to sew together the 2nd dolly quilt center this afternoon...
Good luck with shopping--I used to actually like to go grocery shopping...something about those one-way arrows that gets to me...
Ah well, at least the shelves are better stocked...
hugs, Julierose

Watermelon may be out of season but my stepdaughter found one for her yummy watermelon and cucumber salsa that she served with the grilled salmon and chicken for yesterday's feast at their house. Love stitching down bindings on large quilts, especially since I'm always looking for extra warmth.

We are rainy as well thanks to the remnants of Delta (so glad we didn't get the worst of it). I took Mom grocery shopping a couple days ago - handling her is a single project. And then the next day did my own - luckily our little store 2 miles up the road is not a source of stress.

Well, there were no news reports of mass murder in Oregon, so I am assuming the grocery shopping went okay. I enjoyed your little rant. And your stitching looks lovely.

I love your rants and todays was so good. I got severely told off when I was at school for asking how Columbus discovered North America since there were already people living there! It's wet and rather cool here and stitching binding on a large quilt would be very a welcome and warming task.

I noticed far fewer Columbus Day car, mattress, and appliance sale ads, whether from Covid issues or cultural awareness, I'm not sure. I guess the appliances is because of supply chain inventory delays. Sadly, we haven't lacked for election ads. As far as a no mail day, we hardly notice since we get so little mail these days anyway. Glad you survived another shopping trip and had the afternoon to de-stress in the sewing room.
Pat

Ah - the dreaded shopping trips. I was up at dark-thirty this morning to grocery shop during 'senior's hour'. I hate shopping even at the best of times but having to get up that early and deal with post-long weekend shortages in the the store is enough to drive me mad. It's SO stressful! I'm not totally 'up' on the history of Columbus but I always thought he had his nerve thinking he discovered America when everybody knows it was already occupied.

Since everyone seems to be giving a weather report, I’ll play along. Yesterday was the best day we had in months! No smoke, a light breeze and temperature got into the lower 80*s. It’s been so long but will be shortly lived. The wind direction is shifting and the heat is coming. We expect mid 90*s, strong winds and the smoke to come and blanket us once again. At least some of the fires are contained and a few put out. Others grow in acreage. Those are the ones we will see the smoke from. We pray no new fires start.

Cleaning house and work on NICU smocks. A replacement fence is going up between us and the uphill neighbors. That will complete the task of new fences all around. We hope it lasts 30 years as it is made of redwood.