Keeping Calm and Carrying On

The past couple of weeks have been stressful. There's certainly enough in newspaper headlines to scare anyone. Add in a fire near one's home with an evacuation of several days' length, and you have a level of stress that requires a little recovery time. It was an exhausting effort to stay positive while we were evacuated. After yesterday's grocery shopping trip...pretty easy as those things go...my energy was tapped out, and I took a good long nap. By 2:00, grocery shopping was the only thing accomplished for the day. Eventually, I decided some slow-stitching time might get me moving. 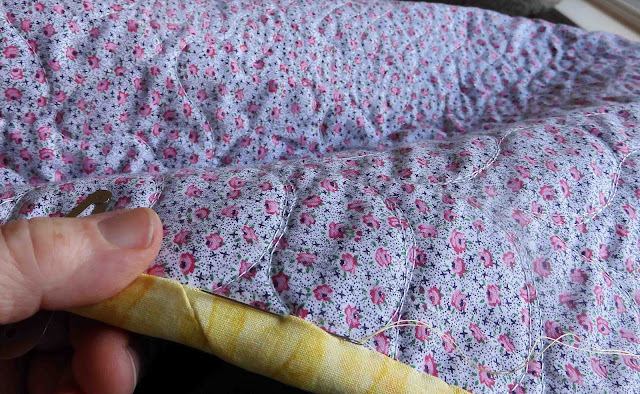 Smitty was no help at all with this. He sat across the room having a spa session while I was hard at work with my stitching. 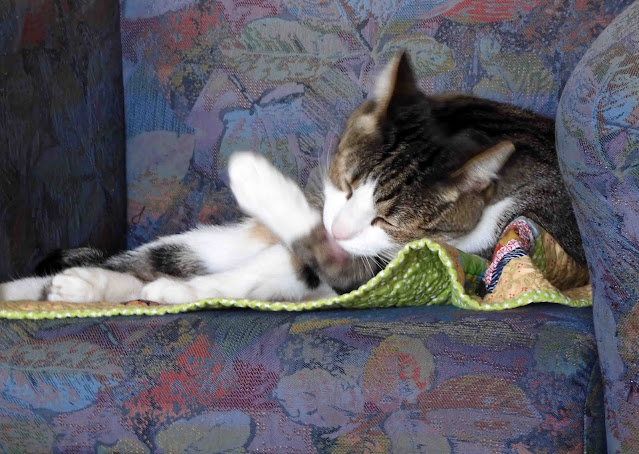 Still, I managed to turn one corner on the Bag Ladies before I was finished. I'd say I'm a little less than 1/3 of the way around on this. 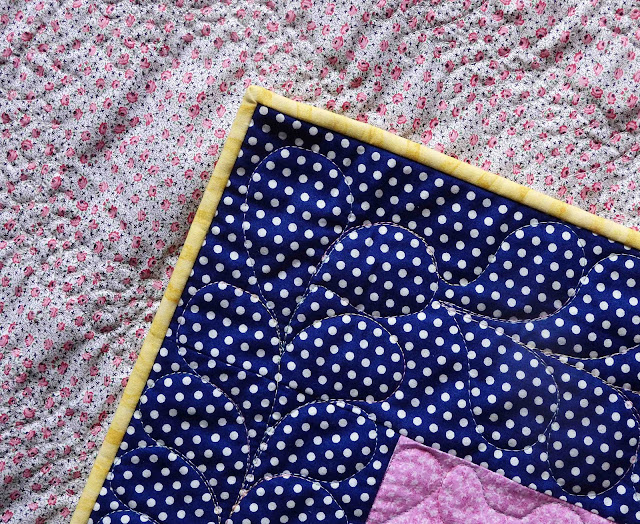 When I was finished, I encouraged Smitty to join me in the sewing room to help with the Jenny's Flower Garden blocks.
Do I *have* to? Oh, bother. 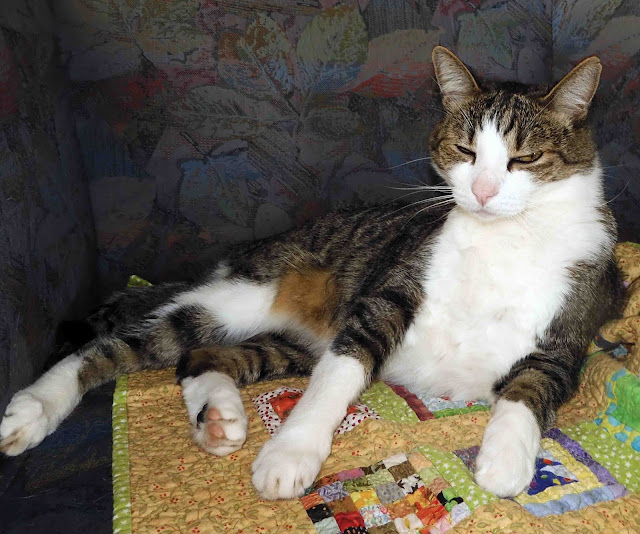 Under protest, he snoopervised the laying out of the squares for randomness. 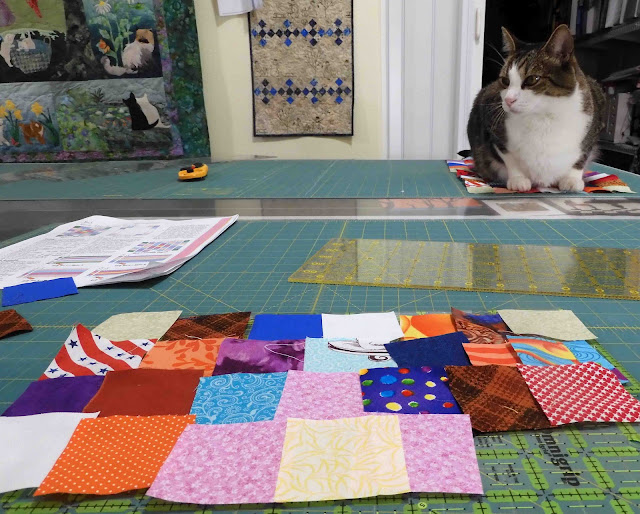 And he held down the blocks from yesterday. You can't sew with those things running around. 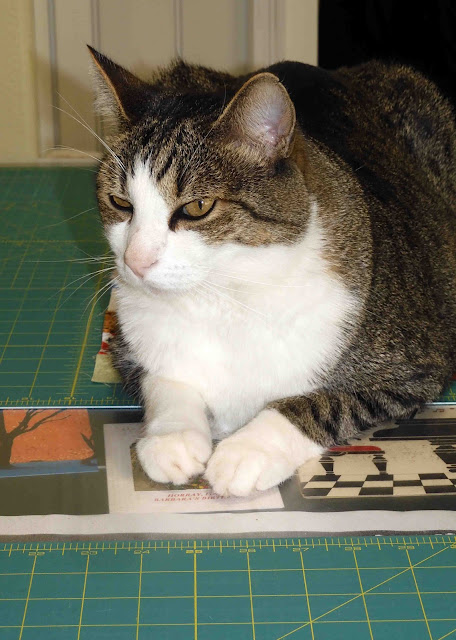 When it was time to make dinner, I had two more "flower" blocks. 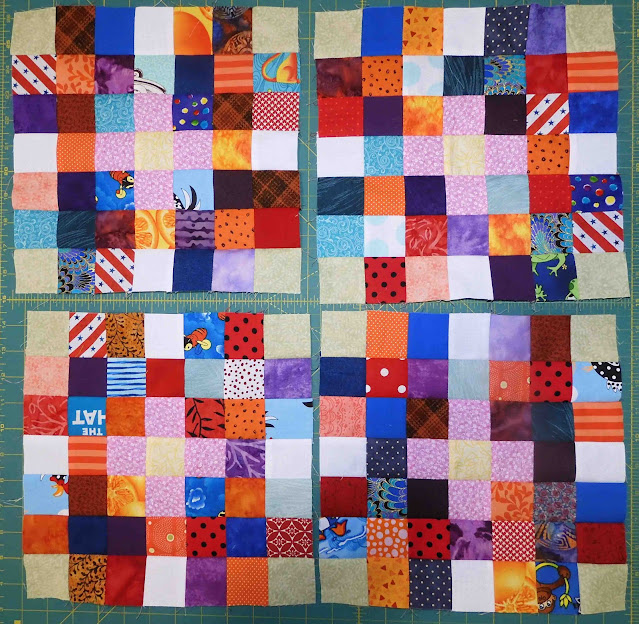 Today, I'll make the three blanks and that will complete another row.
Heading upstairs, Sadie joined Smitty on the catio. 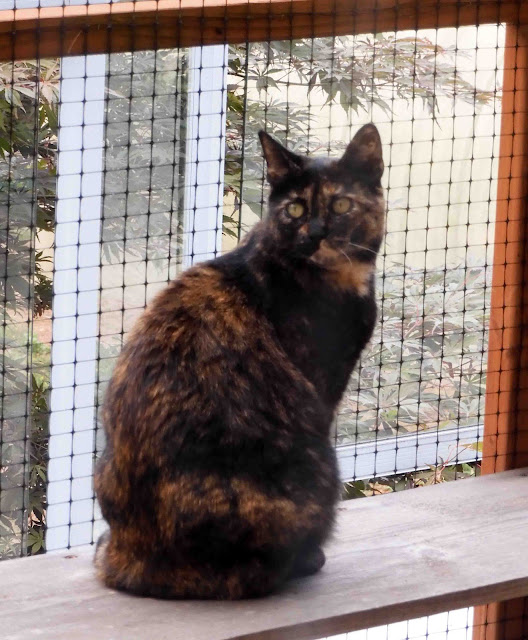 I heard them discussing the upcoming election while I was slicing tomatoes. Neither of them has registered to vote, but they have strong opinions about certain candidates. 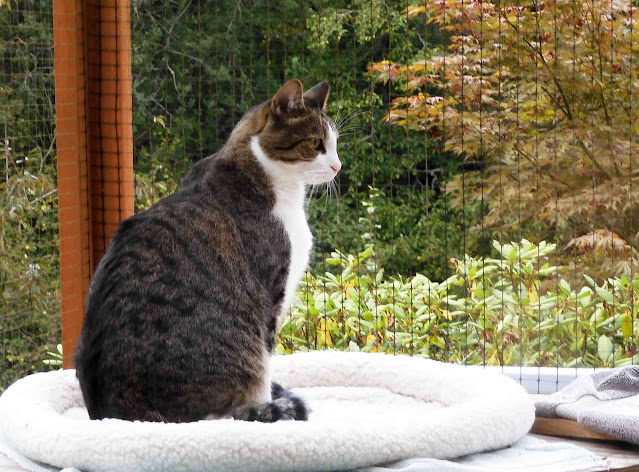 The only other thing I did yesterday was to harvest any corn that looked ready. I ended up with 13 ears. We'll eat some of it, and I'll freeze the rest. Also, I picked more tomatoes. Already I had three pounds set aside for some Roasted Tomato Soup with Broiled Cheddar. I'm linking to the recipe there from Smitten Kitchen. It's the second time I've made this. My croutons weren't very good last time around since we were camping, and I was using sliced hoagie rolls. For yesterday's version, I used sliced baguette, and it was vastly improved. 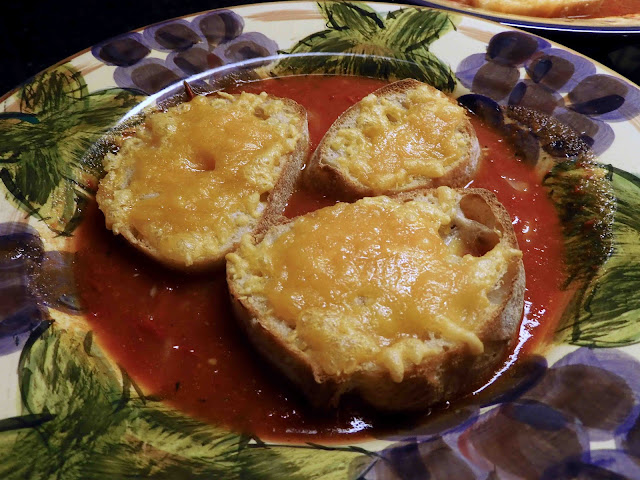 When I canned tomatoes this past month, I first roasted them at a high temperature to remove the skins. It also generated quite a bit of liquid from the tomatoes. All the liquid was saved. Ordinarily, I would use that in canned plain ol' tomatoes, but I didn't do any of those this year. Instead, I froze it as veggie stock, and used it in this soup. It took that bright fresh tomato flavor over the top. Delicious. A little worcestershire was added for more salt and depth. Also, I short-cutted the method for making the cheddar "croutons." The result is what you see above. It was so good, and a nice way to end the day on the first day of fall. So here's how I did it:
Roasted Tomato Soup with Cheddar Croutons
adapted from Smitten Kitchen
serves 4-6
Ingredients:
For the soup:
3 pounds plum tomatoes, halved lengthwise
2 tablespoons olive oil
2 large or 4 small cloves garlic, unpeeled
1 teaspoon finely chopped fresh thyme leaves or 1/4 teaspoon dried
1/4 teaspoon (or more to taste) dried crushed red pepper
2 tablespoons Worcestershire
4 cups chicken or vegetable stock
1/4 cup grated raw onion
For the Croutons:
4 1-inch slices from a large loaf of rye bread, whole wheat sourdough or crusty bread of your choice, toasted and lightly buttered on one side
1 cup coarsely grated cheddar (or more to taste)
Directions:
Make soup: Preheat oven to 400°F. Wrap garlic cloves in a tight foil packet. Place tomatoes, cut side up, on large rimmed baking sheet. Sprinkle generously with salt and pepper. Drizzle tomatoes with olive oil. Add foil packet of garlic to tray. Roast until tomatoes are brown and tender (garlic will be very tender), about 1 hour. Cool slightly.
Unwrap garlic packet and peel cloves. Transfer cloves, tomatoes and any accumulated juices to a blender or food processor and pulse machine on and off until tomatoes are a chunky puree. Transfer tomatoes to medium pot and add thyme, crushed red pepper, worcestershire, and stock and bring to a boil. Reduce heat to a simmer and cook, uncovered, for 25 minutes. Remove from heat and adjust seasonings to taste. Stir grated onion into the warm soup.
Create Crouton: Generously sprinkle grated cheddar cheese over top sides of toasted bread slices, and toast in a preheated 350 degree oven until cheese melts and croutons are toasty. Float toast slice(s) in each bowl. Serve immediately.
Do ahead: Soup can be prepared one day ahead, and kept covered in the fridge. Rewarm before serving, or before finishing with cheddar croutons.
* * * * *
As I've been writing this post, the rain has started up outside. We're expecting rain all day and for the next few days. It's most welcome. Sadly for me, housework and lack of motivation have returned from their vacation. They missed out on all the evacuation excitement, and so they're raring to go. I'll have to indulge their needs a little today too. Otherwise, it's going to be a mostly sewing day. I'm going to get a start on the next plate for Pieces of the Past. 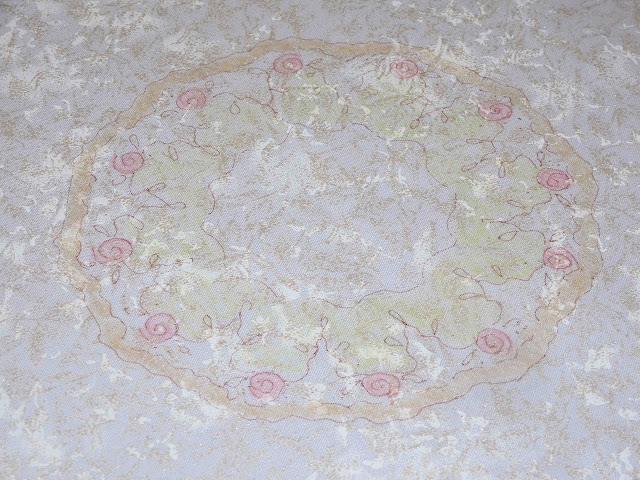 And then I'll continue stitching on the binding for the bag ladies. And I'll finish up the row for Jenny's Flower Garden. If that doesn't keep me busy for the day, I'll get started on the next block for Shop Hop 2.0. When I last worked on it, I had three blocks made.

After that...I don't know. I'd say the sky's the limit, but with rain falling, I'll be limiting myself to the interior of the house.
Posted by Barbara at 7:45 AM

The flower blocks are pretty with the pink centers....I am soaking Navy Beans for our Bean soup on Friday...looking forward to that...
Lovely day here--if it weren't for the constantly barking neighbor's
dogs (aaargh!!) I'd be out on the deck...so annoying!!
Hope you can catch up on your rest--I will be reading this afternoon and probably napping...hugs, and stay safe Julierose

I can't even imagine; I am stressed to the breaking point without an evacuation! I am impressed that you are able to divert yours into gettingso many things done, which I seem incapable of. I saved that tomato soup recipe last year and haven't made it yet. I have made other tomato soups but never have the bread on hand for this one. Now I am lusting for it so I'm adding a baguette to this week's grocery list for sure.

You've definitely been put through the paces lately. Glad you could enjoy a long nap. I'll bet that tomato soup tasted delicious; nothing beats fresh tomatoes. We are having rain here this morning.

Your tomato soup certainly looks a whole lot more tasty than the canned stuff that I grew up on! Too bad Smitty and Sadie can't vote.

Glad that you and the kitties have recovered from all the stress. It hasn't been great since March and to have all the evacuation stuff thrown in there too just wasn't fair.