With rain falling for most of the day, it was very nearly sewing all day long. I was brave and did a little housework too. It allowed me to sew without guilt. The morning's slow stitching had me getting a start on the next plate for Pieces of the Past. 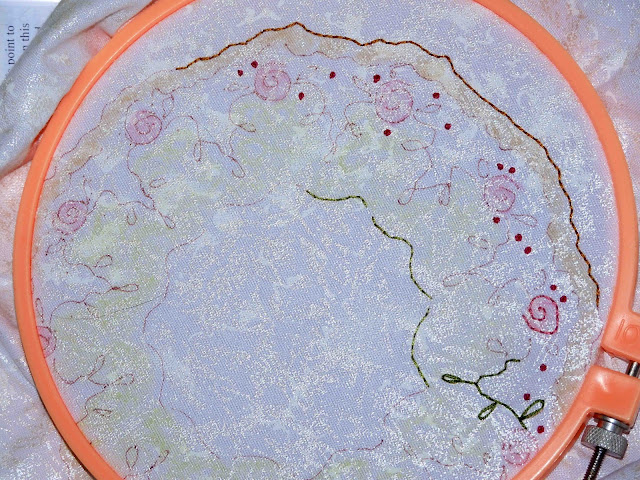 It's a small piece, and so I expect it won't take long to finish it. When I was ready, I did my housekeeping chore, and then rewarded myself with some slow stitching around the binding for the Bag Ladies. I've turned the second corner now. 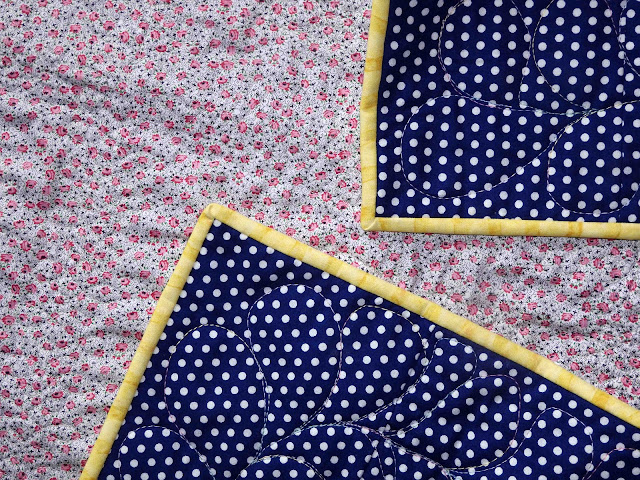 And time flies, doesn't it, because it was time to collect the mail then. I found my Teal Mini Swap mug rug there along with several fat quarters and fat eighths of fabric. My swap partner completely ghosted me this year. I tried half a dozen times in different ways to contact her. Then, disgusted, I went ahead and made her mug rug and mailed it off. I mention my disgust because I didn't even bother to take a picture of the mug rug I made. It was a mug rug with teal "plus" blocks on a blue crab fabric background. (She lives in North Carolina, and I made use of the blue crab fabric I bought while we were traveling there.) 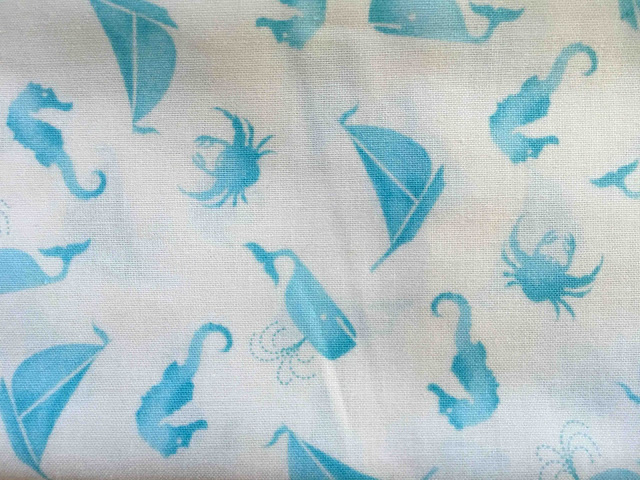 So, I mailed that off about a month ago, and never heard word one from her. It was kind of a disappointing swap experience. The thing is...in a swap, it's the relationship that comes from it that makes it fun for me. The swap is only secondary. So...anyway...(picks self up, dusts self off), Beth, who organizes this whole thing, also sets up an army of "angels" for just this sort of occurrence. My angel, Nancy, sent me all this cool stuff, and that's my mug rug there at the bottom. The teal spoon was the fabric used in this year's swap. Thank you, Nancy. It was a very fun package to open, and it went a long way toward salving my wounds of disappointment. 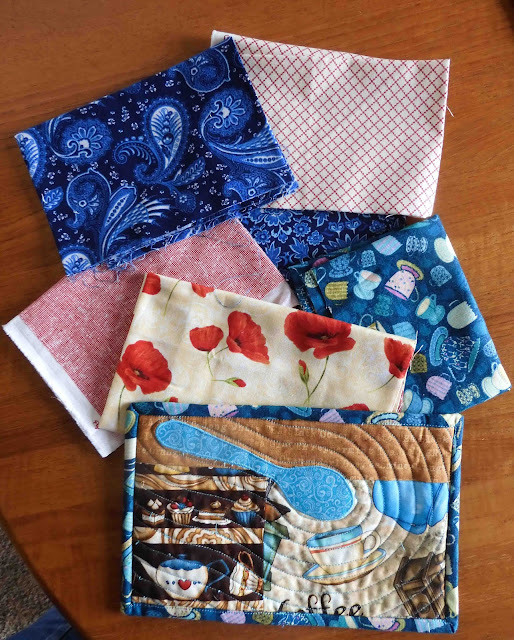 Also, I received a fabulous package from Nanette, who decided to unload a bunch of Cynthia England patterns and a Cynthia England book. Someone told Nanette I might be interested in this stuff, and whoa! I forget who told her, but thank you. And thank you, Nanette. If you're unfamiliar with Cynthia England's work, I highly recommend doing a Google search for her name. You can find her gallery right here. If you do a YouTube search, you'll find some video tutorials about her technique. I was lucky enough to see this fabulous quilt when I attended the Northwest Quilting Expo in 2018. 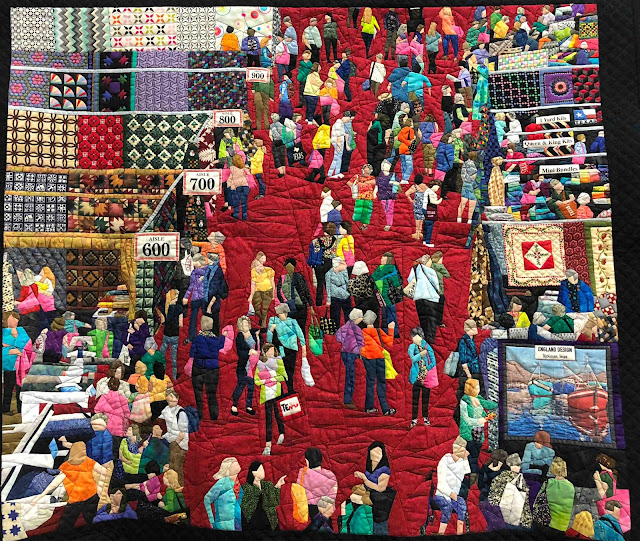 As for yesterday's mail, what a treasure trove this was! 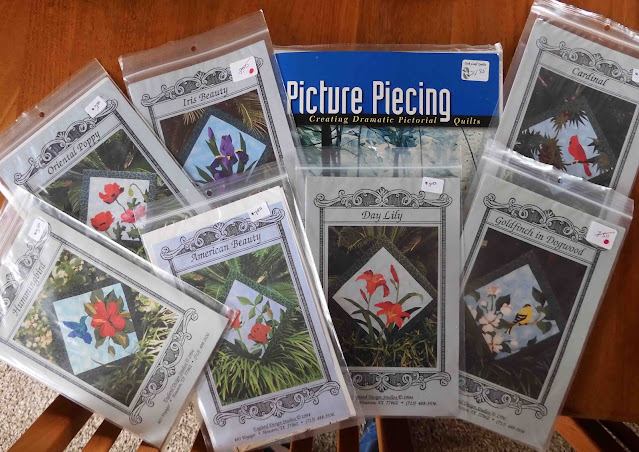 Also included was this pattern and the fabric kit to go along with it. 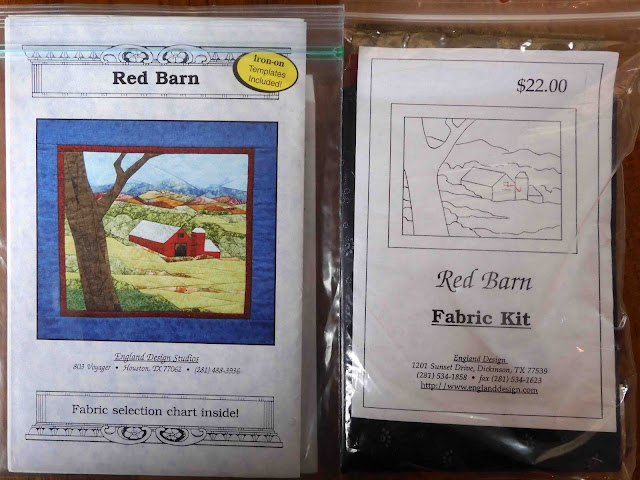 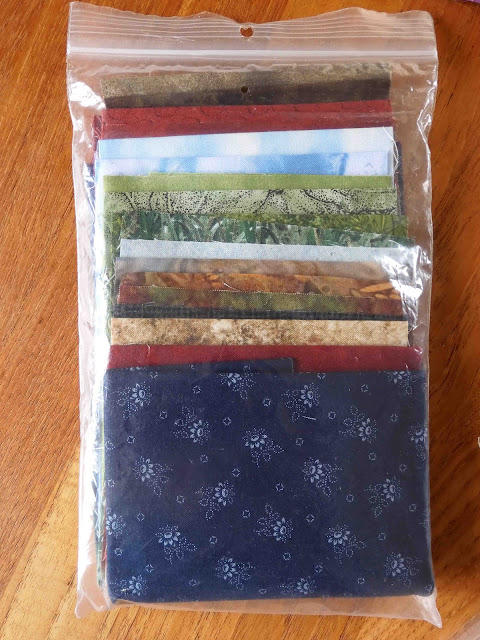 Well...I'm going to have fun with all of that. Those will make great take-along projects when we head south this winter.
So back in the sewing room, I finished up the three "blanks" for Jenny's Flower Garden. I ended up with a lot of oranges and dark purples for these blocks. Oh well...they'll be spaced randomly throughout the quilt, and so it probably doesn't matter there wasn't more variation. 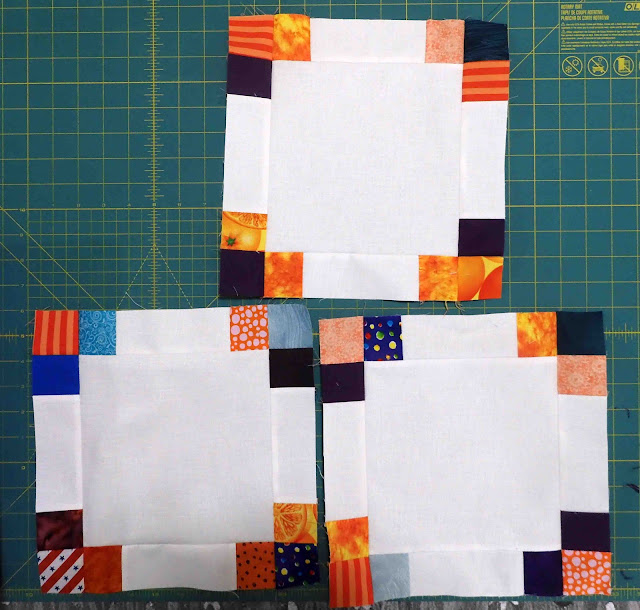 With those done, I had another row complete. I've laid all the blocks out to show the design of this triple Irish chain. When all the rows are complete, it will be set 7 blocks by 7 blocks. 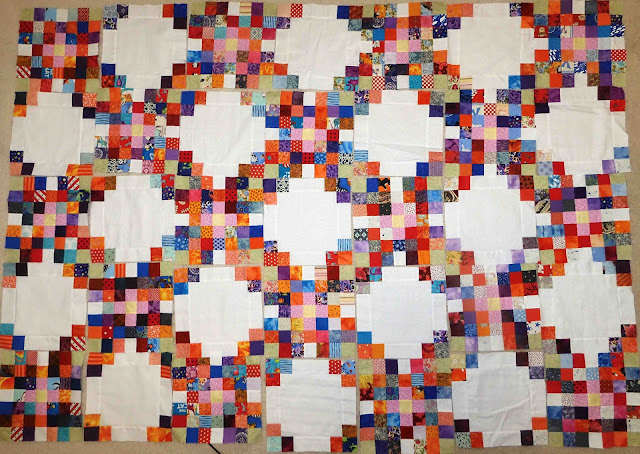 And with that finished, I was also able to get on with the next block for the Shop Hop 2.0 quilt. This time, I'm using a fabric I picked up at It's Sew Moab from our last trip to Moab, Utah. Mike and I love Moab, and we've visited many times. Our last trip was to ride ATV's. I couldn't find a fabric specific to ATV's, but this Jeep fabric seemed like a good choice. I drive a Jeep, after all. 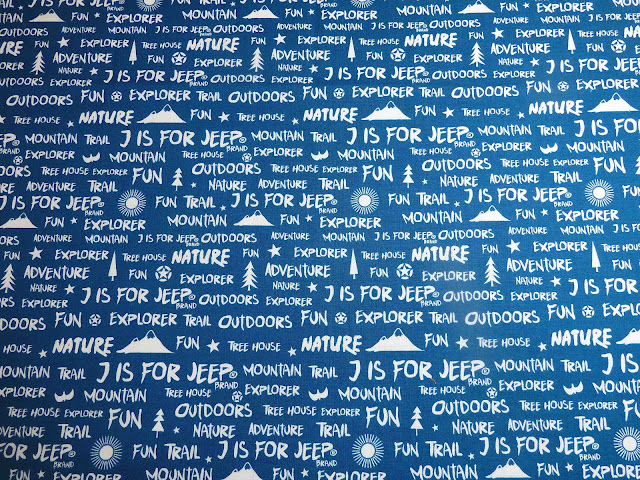 But on a visit in 2006, Mike and I rented a Jeep and drove Schaffer Canyon Road in nearby Canyonlands National Park. It was great fun. Here, Mike was surveying the view. 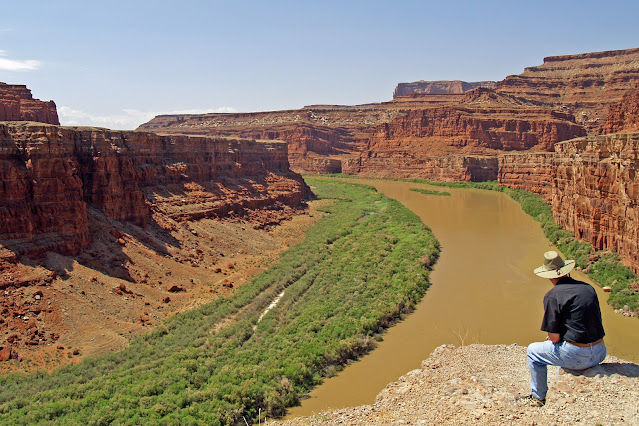 Along the way, we passed this immense natural bridge. It was about 5 feet wide and many hundreds of feet above the canyon floor. It was possible to walk across. Ordinarily, this sort of thing would be too scary for me. The width of the bridge was enough that I felt safe venturing out and boldly lying down for this next shot. At least lying down, I wasn't afraid of falling. 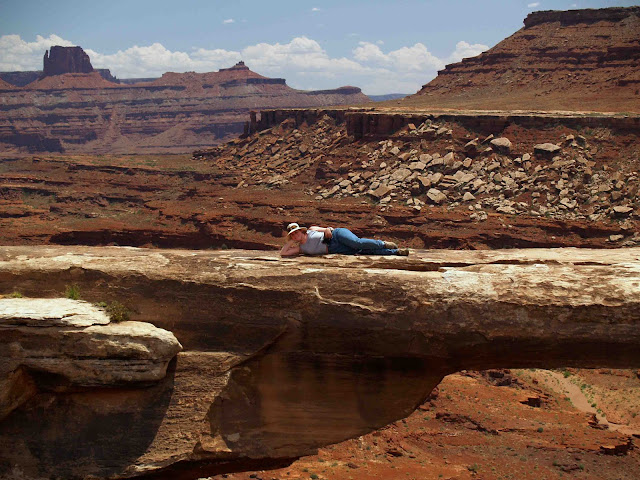 Okay, so enough reminiscing...let's get on with this block. A few of you have asked how I do the lettering, and so I'm just about to tell you. I first print it out on a regular sheet of paper. In this case, I'm using a 22 point font called "Banschrift SemiBold." It's a good idea to write down where this file is stored on your computer so that you don't have to reinvent the wheel with every block. I just reopen the old file and put in a new name each time. The font stays consistent. 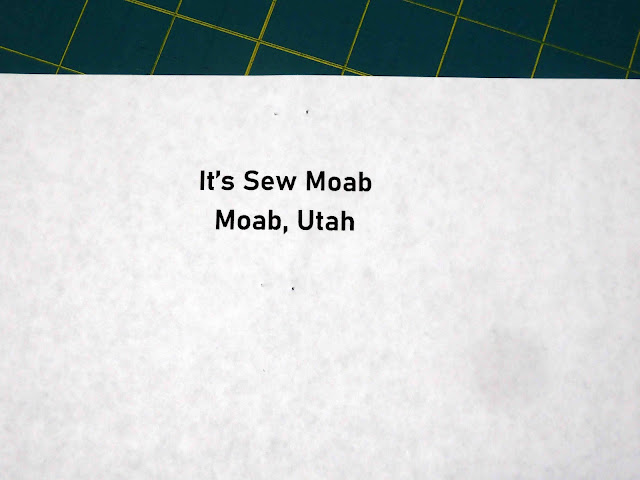 Then, it's traced out on a large piece of fabric a little wider than what I'll need for the finished block. Also, you need to leave enough room for your embroidery hoop...unless you're one of those hoopless people. Definitely, I am not among you. This one was short, and so it stitched up pretty quick. I'm just using two strands of black floss and a simple backstitch. 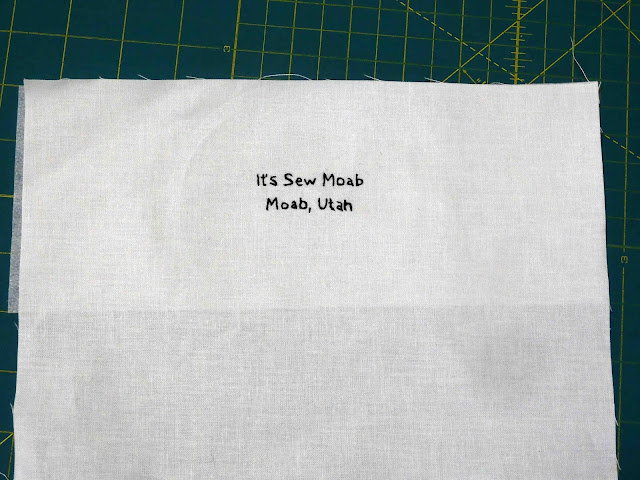 Another way to avoid reinventing the wheel with each block is to take a photo of the first one indicating how to trim. In this case, I've lined up the 1-1/2 inch line on my ruler with the bottom of the lettering. 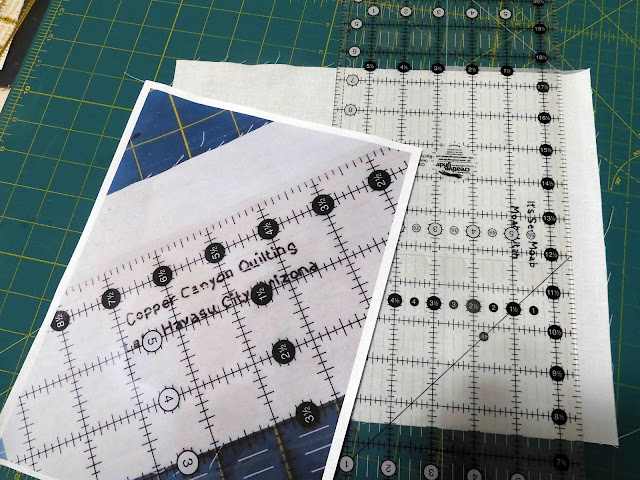 Trim the top there, and then measure for the bottom and sides, and you have your block's "name plate."

The strips were mostly all cut from the last block I made, and so this one went together pretty quickly. 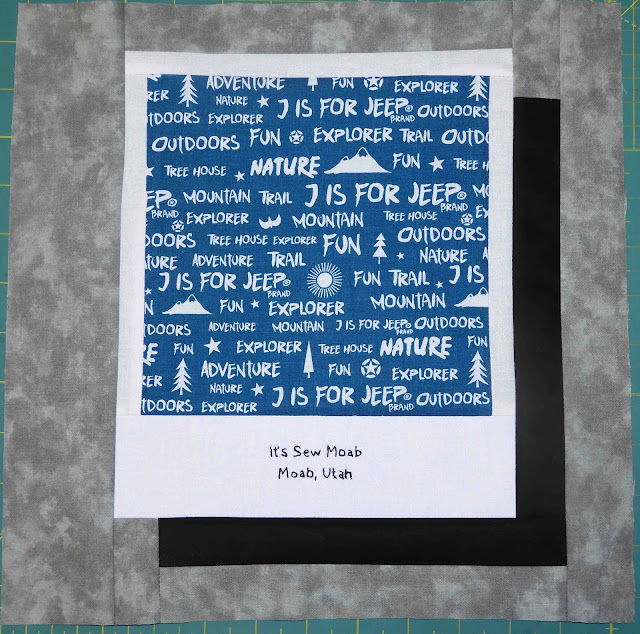 These are the four blocks I have for this quilt so far. 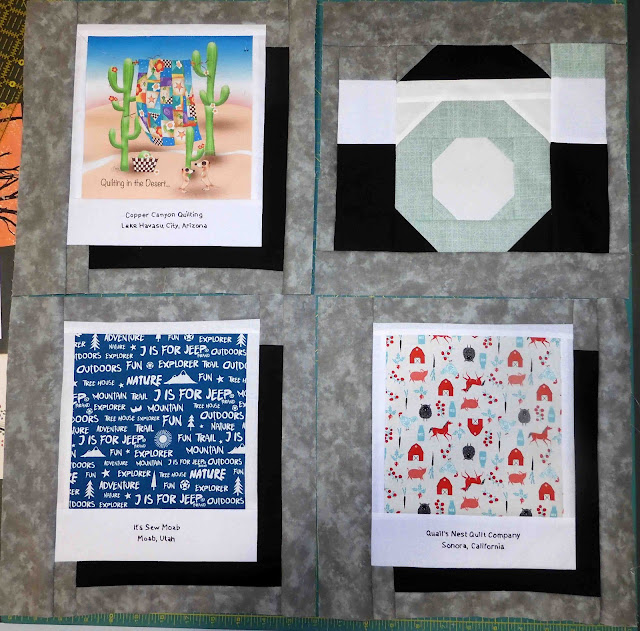 You can find the tutorial for the photo quilt block right here. The camera quilt block tutorial can be found right here. I like how this is turning out. The photo quilt blocks are especially cute for this quilt. I'm not sure yet how many blocks I'll make before I'm ready to sew it into a flimsy, but the camera block will be right in the middle.
Okay, so for today's sewing, I'll get started on the next block for New Mexico Kitchen. I'll be making the Blue Corn Bread block. Here's the picture from the pattern cover. 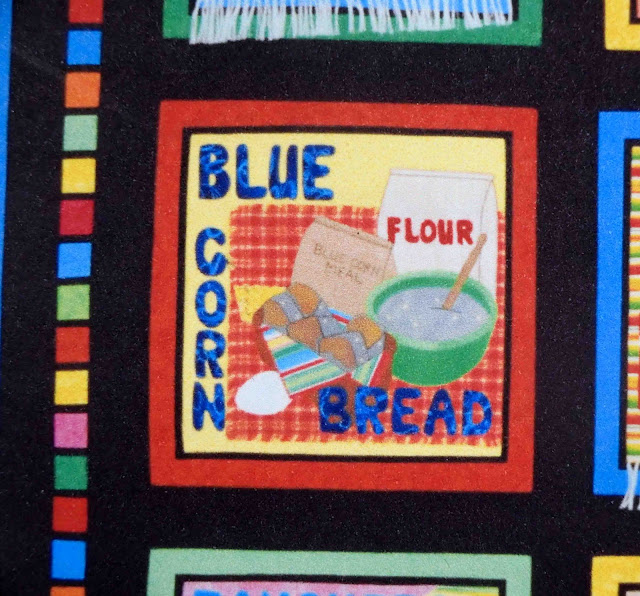 These take a while to make, and so I don't expect to finish it today, but I'll get a good start on it.

So there was lots of sewing yesterday, and not a cat in sight. It's hard to get good help these days.

i absolutely love the Polaroid idea for your blocks - makes me want to start another UFO! I'll have to dig around, as I don't have "planned" purchases, but I'm sure I'll find enough that I remember where I bought them. My favourite is a red toile I bought in Rome, Italy!

I really like the photo trick for trimming blocks. I take photos of my machine settings when I switch between projects.

What a cute little cheesecake photo of you! I have a similar one of myself, at age 24, probably the last time I dared lie down because I was sure I could get up from the ground.

Wow - those sorts of mail days are rare these days....lucky you! Too bad about your swap partner though. You wonder why she signed up for it if she didn't plan to follow through, but I guess some people are just in it for what they can get.

That barn quilt project is perfect for you! Glad it found a home with you to brighten the swap experience.

What a great haul of happy mail. It's very nice that Beth has some angels to help out when swap mates disappear (perhaps she fell victim to Covid or some other medical emergency). And particularly disappointing because I think I read that this was the last year the teal swap was being held. I have heard of Cynthia England and think I may even have one of her patterns somewhere, but I never developed a passion for paper piecing. You really accomplished a lot, and all without feline assistance. How could that be?
Pat

Hi Barbara, Gretchen from Gretchen’s Little Corner told me that she thought you would love the book and patterns! I am so very happy that you love them! I love to share and pay things forward from all the times in my past that people shared with me. Enjoy and will be looking forward to seeing the results. Have a blessed week! Hugs

Very sorry about your Swap partner. It really makes things difficult and so unusual for a quilter.

The Polaroid quilt is going to be a fun one. Someday I'll make one, I think, because I like the 3D look. I've had a few swaps like that. Really frustrating. I'm glad there was a swap angel to help you out, though. Oh boy, you are going to have fun with all those patterns and the barn kit. Someday I'd like to see Moab.

I have to say I was thinking the same thing as MisPat. She could have flaked, which your gift should cause her some embarrassment.

Let those fur balls know that you are docking their time card. You can’t expect treat pay if you don’t show up for work.

Have a great day with your mail haul.

You have such diversity in all your projects! Variety is the spice of life. What a nice bit of mail to receive - this is why I stopped taking part in swaps (and postage costs).

I participated in an Apron swap this summer. I knew who I was supposed to mail my apron too, but I didn't know who I was supposed to receive an apron from (still don't). I never received an apron, and the hostess never could contact her again. Sorry it happened to you. Glad someone else stepped up to the plate.

Sorry you didn't have a fun swap partner, that's so disappointing. Love you photo blocks, that camera block is definitely cool.