Blue skies! We can breathe again! (Breathing is a very important ingredient to a happy life.) 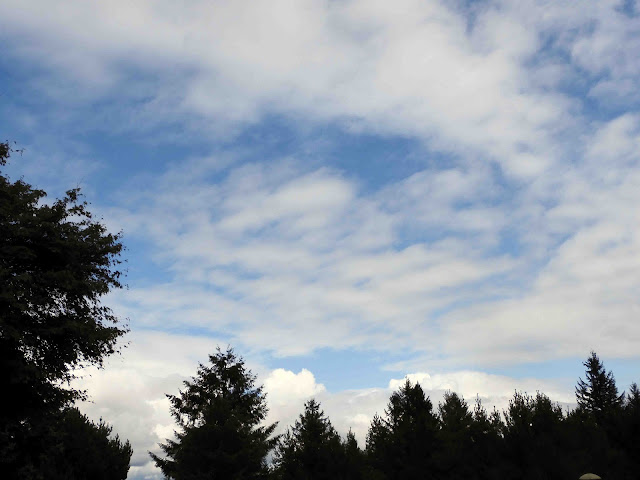 The kitties are enjoying life at home again too. They were out for us while we did our outside chores. Sadie thought she saw something off in the trees.
Smitty! There's a mouse over there. I heard it scurrying through the leaves. Just follow my pointer nose, and you'll see what I'm talking about. 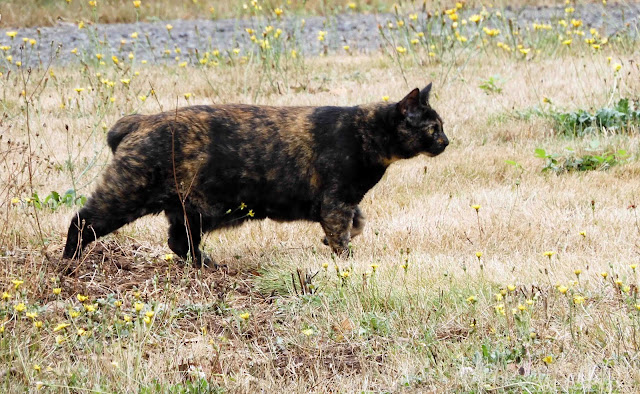 It was the wind, Sadie. You're going to have to learn to listen for their itty bitty feet steps. There is nothing there. 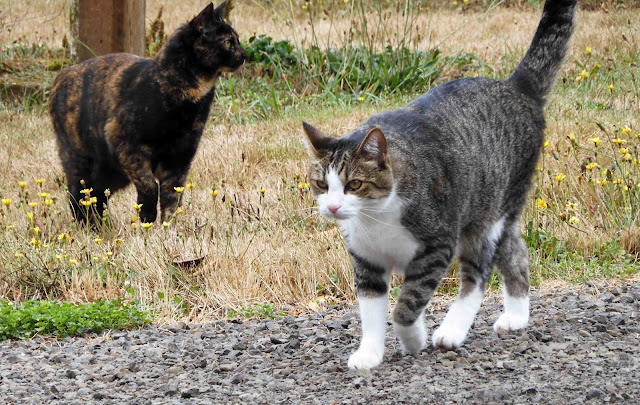 Are you sure, Smitty? Don't you think we should at least go look? 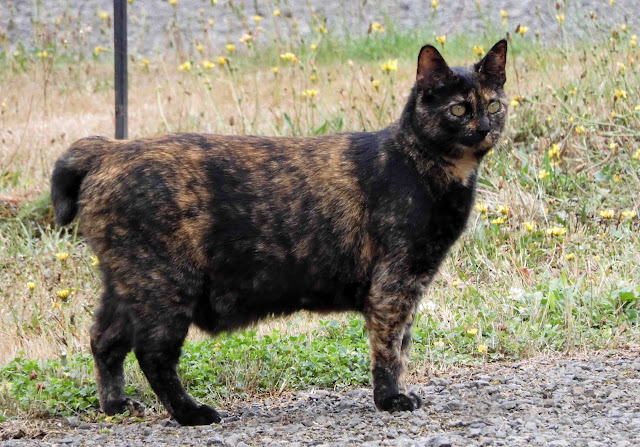 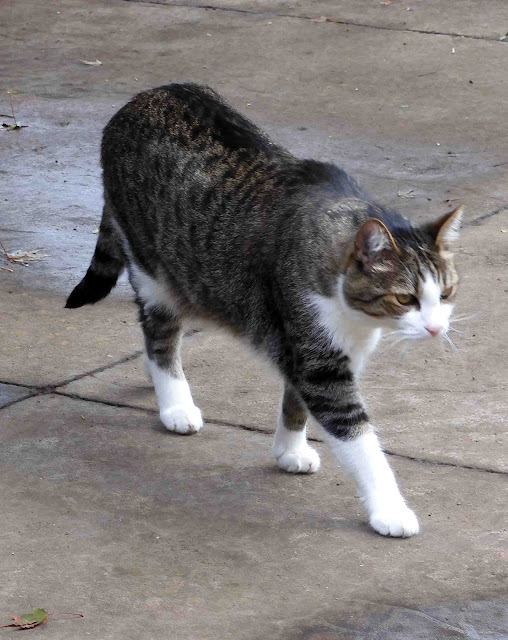 Smitty headed to the other side of the garage where he found the mouse of his dreams. Meanwhile, I was harvesting corn. I harvested eight of the largest ears. And there is more. There is so much more. Erik might come up today to collect some. 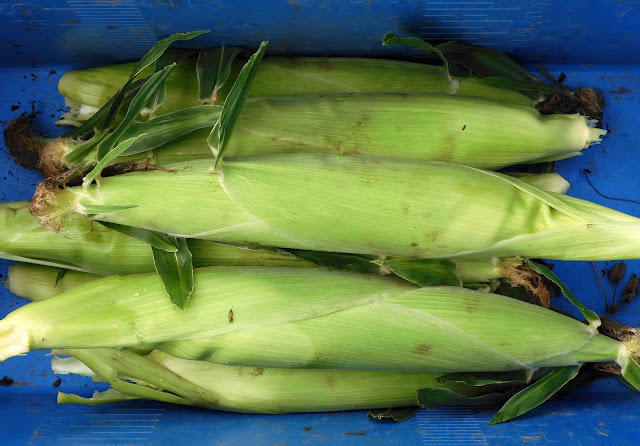 There isn't much to show in the garden these days. Things are winding down for fall and winter. Nevertheless, our sad little apple tree has had its best season ever. They aren't beautiful, but they are plentiful. I'll just leave these for the deer, but I did pick a half dozen or so earlier that were used for baking. I don't even know what kind of apples these are, or even if they're good for eating, or even if they're ripe at this stage. They worked well for my baking project when I turned them into a Magic Apple Plum Cobbler. 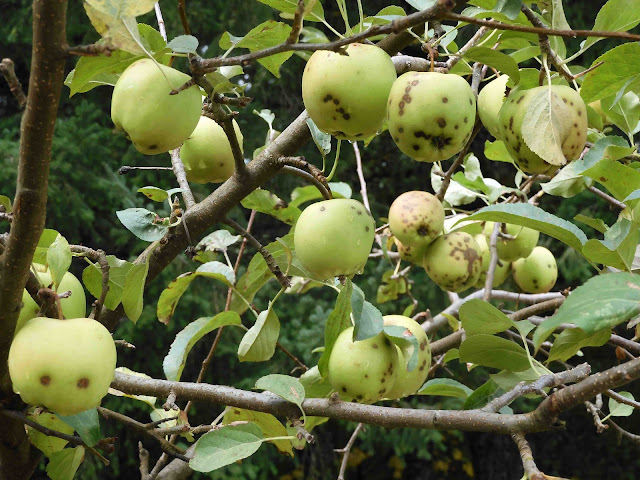 When I was finished outside, I got back to my quilting. I'm happy to say that all the sashings and cornerstones are quilted now. All that is left are the three outer borders. 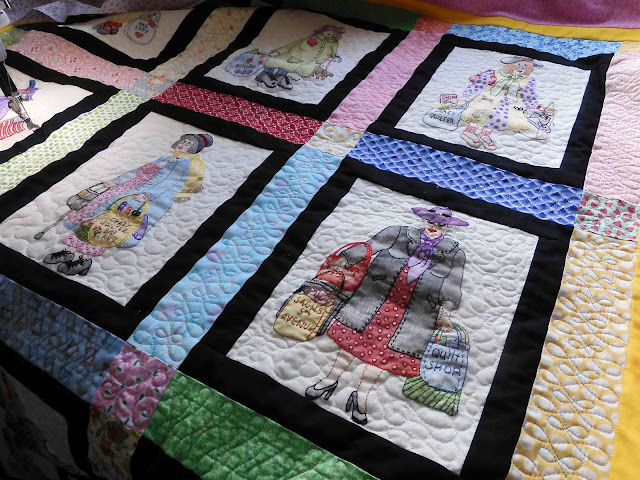 As I mentioned yesterday, I quilted a pinwheel into the cornerstones. I could keep this design going without cutting threads by quilting half the pinwheel on the horizontal pass, and the other half on the vertical pass. 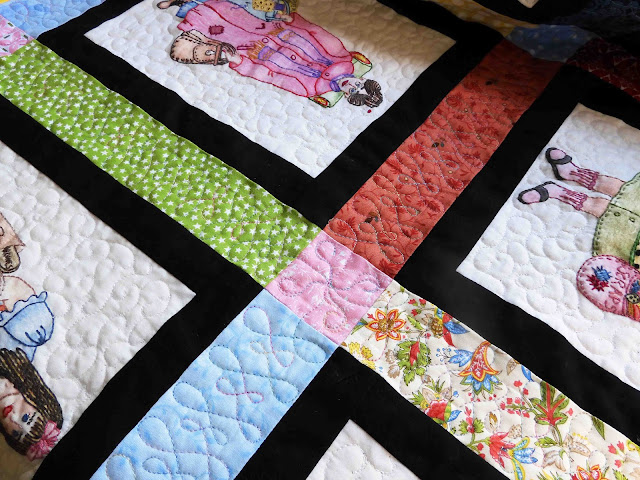 I left it needle down on the narrow yellow border where I'm doing Lori Kennedy's "Paperclip" motif. I like this motif because (a) I can do it, and (b) it gives a nice texture. 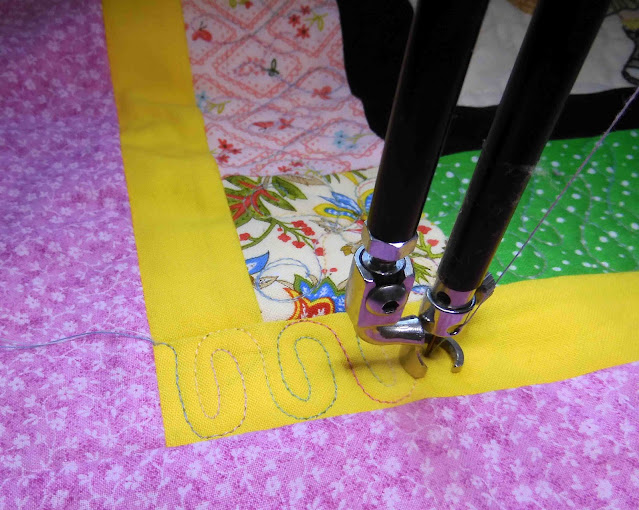 There was only about an hour left in my sewing day at that point, and so I headed into the basement sewing room to cut 2-inch squares for Jenny's Flower Garden. To make the blocks for the next row, I need 180 of them. These are cut from my smallest scraps. When I had to stop for the day, I had 150 cut. 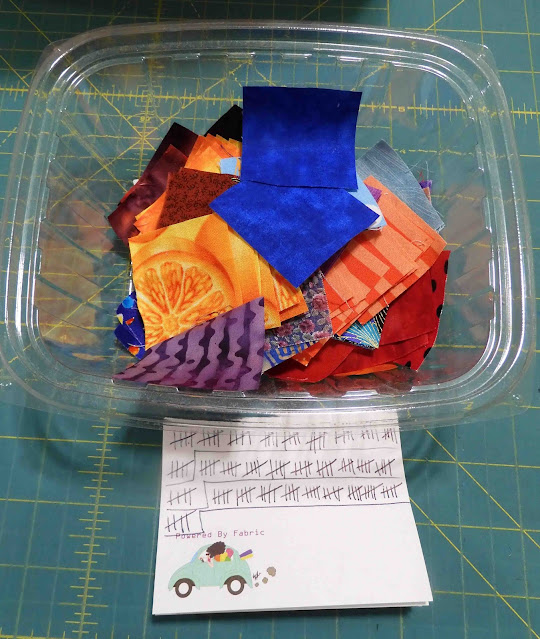 I needed to stop a little early because I was making Creamy Corn Chowder for dinner. This recipe is a bit of a to-do, but it's worth it once per year when fresh corn is available. It's so tasty. I'll link to the recipe in a minute, and I'll give you a tip on how you can make it a little less time-consuming. But first, I wanted to show you this nifty trick I picked up from America's Test Kitchens.
It's kind of a messy job cutting the kernels from the cob. I've placed the tip of the cob on a plate before, but I still ended up with kernels flying everywhere. American's Test Kitchens published a tip to use a bundt pan for this. It gives a stable base to hold the cob, and the corn falls into the pan. 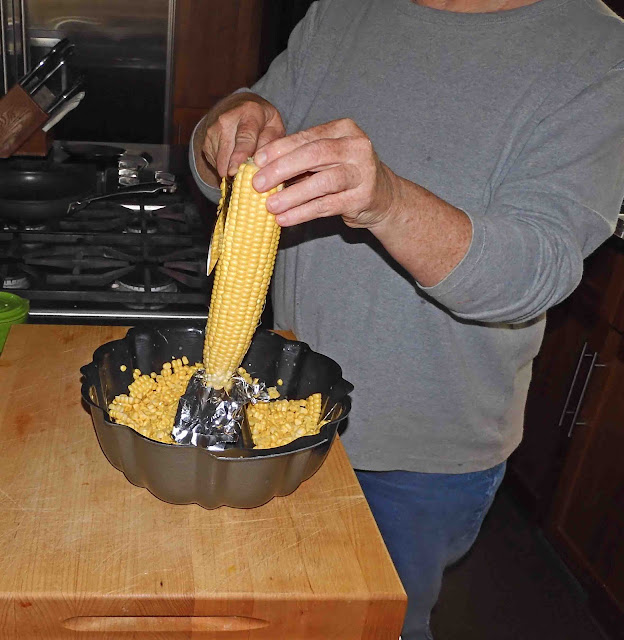 I covered the center tube with a couple of layers of foil. The knife was hitting the pan with every down stroke, and I worried about damaging the nonstick surface of my pan. Cutting a small piece of foil and then folding it several times took care of that.
About an hour later...Creamy Corn Chowder. Yum. So delicious. There's enough left over for another meal too. 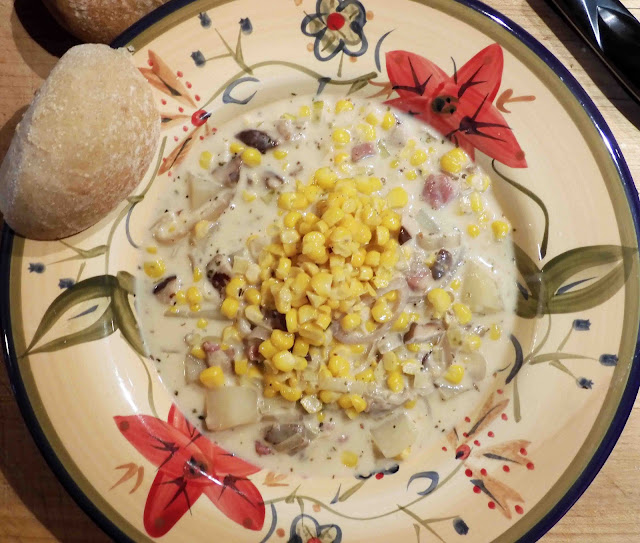 You can find the recipe for this right here. I only make half for the two of us, and I still have leftovers. You can shave quite a bit of time from the cooking process by using 4 cups of vegetable stock...store-bought or homemade. Of course, if you're only making half, then you'll only need 2 cups.

So today I'll get out and pick another bucket o' weeds, and then I'll get back to my quilting. I don't know if I can finish all the borders today, but I'm hopeful.

Fresh air--yay!! It must have felt so good to breathe in great lungfuls...
Looks like you are back getting your quilting going again...
pretty threads on that...
The corn chowder looks delish...
Enjoy Hugs, Julierose

Finally fresh air, I am glad that everything goes better in your region.
Like your bag ladies and your quilting work.
Have a nice day.

So glad you have clear skies, the kirries are finding mice, and the corn crop is coming in. Routine is calming after the past few weeks for you!

Easiest (and yummyist) corn side dish ever: Cut the corn off the cob. Melt butter in a pan, add minced garlic and cook. Add the corn until heated through. Salt, pepper and serve. I wish I had more corn so I could make more of this.

I’m glad you have blue skies. I hope the rain put all your fires out. We had blue skies over the weekend. Today starts a new “Spare the Air” sequence of days. Not sure how high the readings will get but have been told not as high as the orange skies days. Currently we are 130 and rising. It will be better if we can stay under 200 but we will see. We are not safe until late October when, perhaps, the first rains come in. I’m hoping they come sooner. Staying inside with no exercise is not working for me. But sewing is.

Very clever - not only using the cake pan but also the use of foil for protection. Fresh corn and fresh air - both are blessings.