Just take a look at this wonderfully wet world. 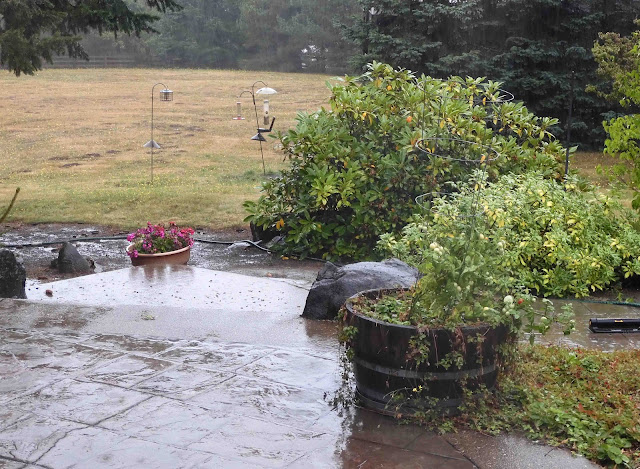 We got more than an inch of rain in less than 24 hours. I thought there might be more today, but it looks like the chance of that is slim. It's fine though. There's more forecast for later in the week. In the meantime, I have corn to harvest! And some weeds to pull! It's perfect weeding weather.
The kitties are lapping it up (pun totally intended). When I came upstairs to write this post, I left Smitty snuggled into Mike's lap. 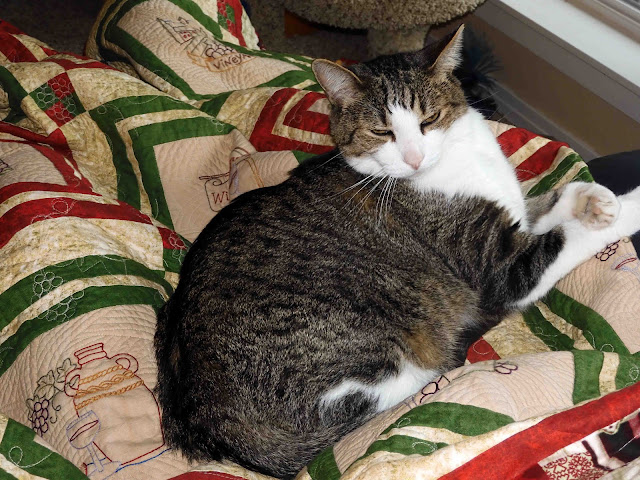 Sadie was sitting on me until I got up. She's settling down some after her stressful week. I think getting back to more regular sewing has them both relaxing into things a little more. Kitties need their routine. And, honestly, I do too. 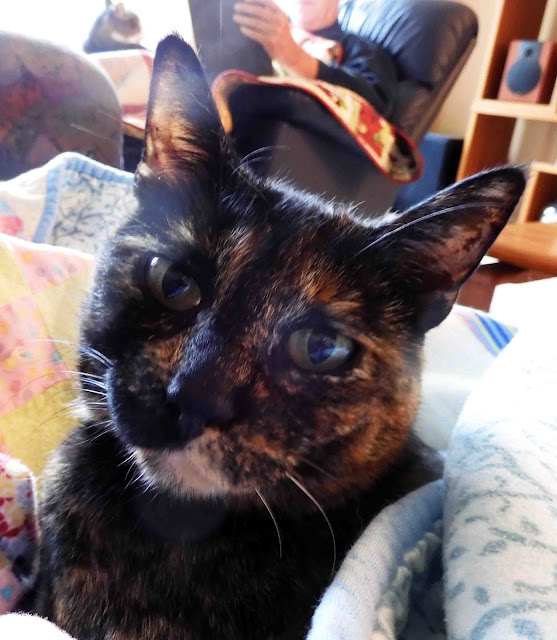 Yesterday I finished quilting the last three bag ladies. This is Millicent. 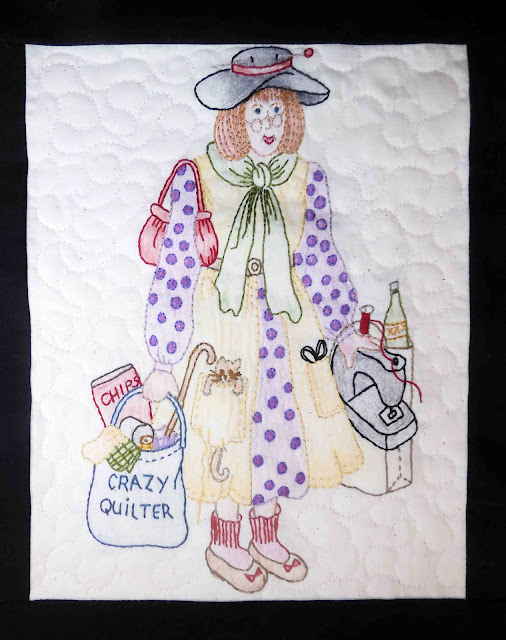 Here, we have Thelma. Her buttons are missing. I think I just forgot to add them. 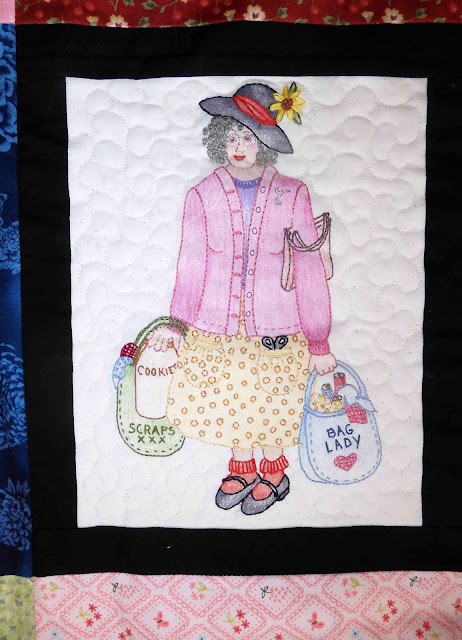 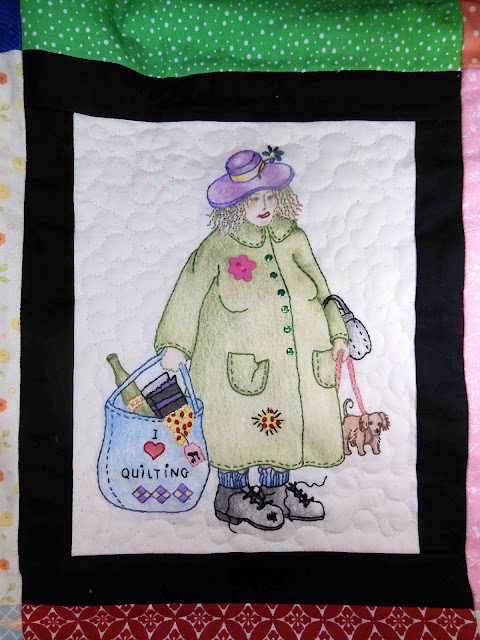 Of course, Smitty was there to make sure everything was going to plan. He was offended that Ernestine has a woofie in tow. 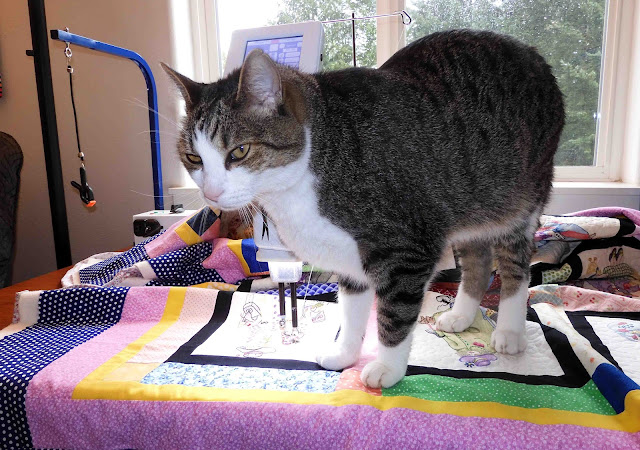 I've been using a "natural" white thread up to now. The rest of the quilt will be done in this Coats & Clark Star variegated thread. 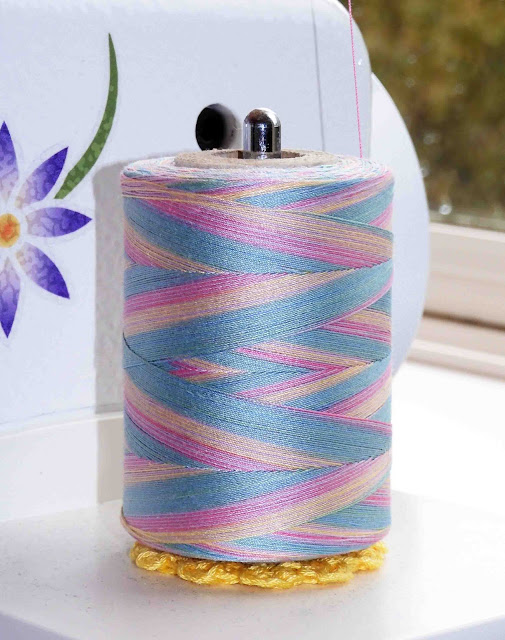 These threads come in such pretty colors. For some reason, I have an idea Coats & Clark stopped producing the Star line, but there are lots of sources online. Maybe I'm wrong about that. You can see the many colors available right here. Once I had the thread loaded on the machine and I'd adjusted the tension, I went to work on one of the horizontal sashings. I'm doing a loopity-boopity-swoopity motif. Two big loops, and two small loops. I used a ruler and a Hera marker to mark two lines so that I could get the loops fairly consistent in size. 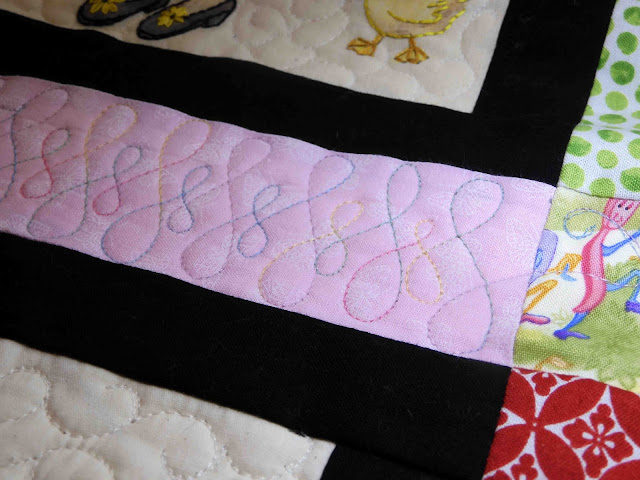 I'll do a little pinwheel deal in the cornerstones, but I'll only do half until I start working on the vertical sashings, and I'll finish them off then. Here's another little section of the sashing. 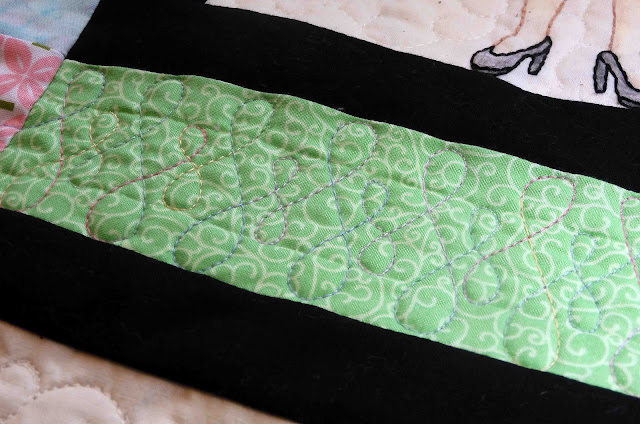 I was only going to do a little bit of that. Sometimes when I get a rhythm going, it's hard to get my hands to stop. It was getting time for dinner though, and so I didn't have much choice. There are still four horizontal rows of sashing to do today. If it goes quickly enough, I might do the vertical rows today too.
There was no time for sewing in the sewing room yesterday, but the UPS man brought a couple of deliveries. I'll be finishing up Appalachian Memories pretty soon, which will open up a slot on my embroidery dance card. As I've mentioned before, I have so many embroidery patterns on my to-do list that it's almost impossible to choose among them. I use a random number generator to help me decide. This time, Mr. Random chose Calendula Patterdrip's Cottage. I've had this pattern stowed away in my sewing room, literally, for years. 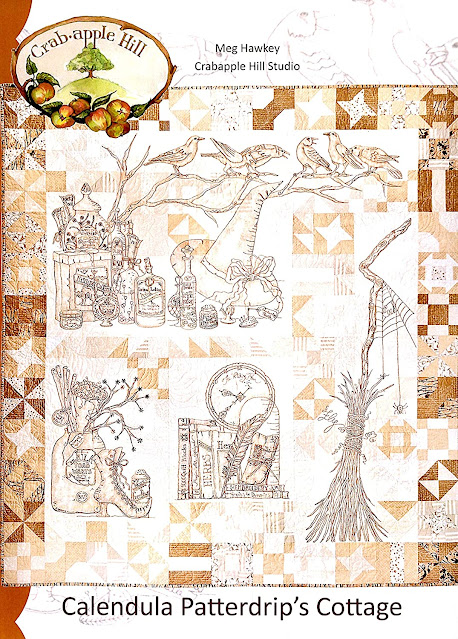 I didn't have an appropriate fabric for the embroidery backgrounds, and so I ordered three yards of this one: 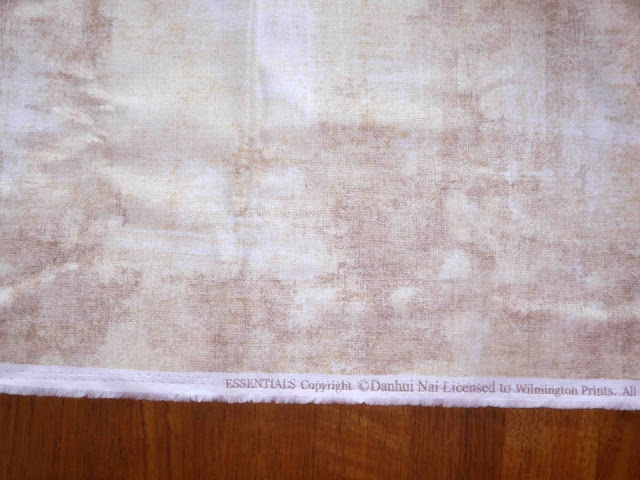 It'll be used in the pieced blocks too. Also, the pattern suggested a variegated Cosmo embroidery floss...around 20 skeins. When I tried to order them online, I couldn't get them in the quantity I needed, and so I went with a DMC solid golden brown. Those arrived yesterday too. All of the embroidery will be done in the same color. 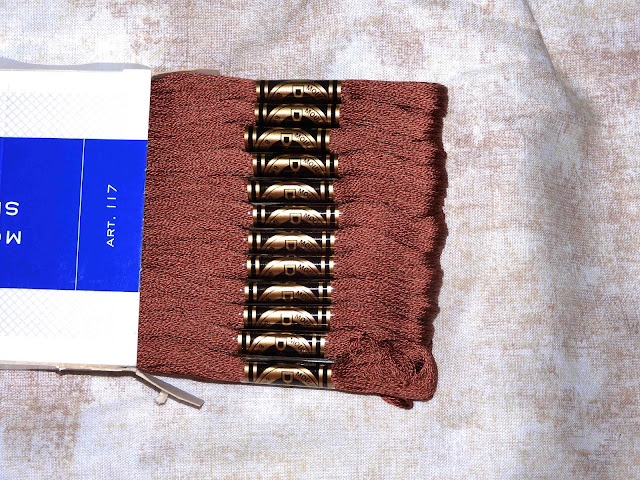 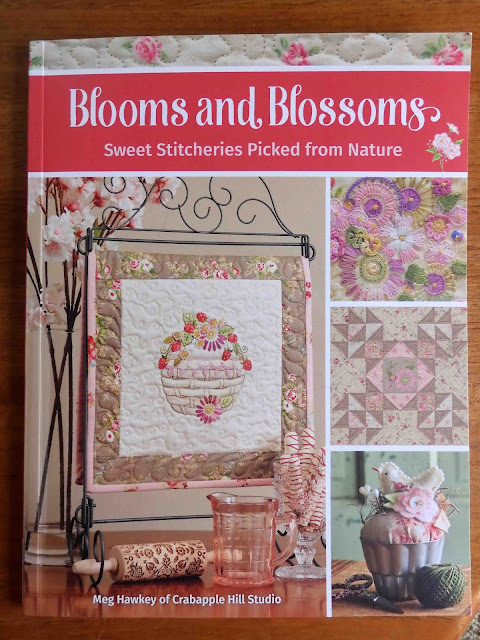 It has some very cute patterns for small quilts, needle books, pincushions, and wall-hangings. It also contains a good section about preparing a piece for embroidery and a good stitch dictionary. For someone looking to get back into hand embroidery (or just starting up as a beginner), it's a good resource.

Today I need to get some laundry done, and I'm going to weed a small patch outside. We're going to harvest at least enough corn for corn chowder for dinner...a favorite of mine. Aside from that, I'll just get back to my sewing. My kitties' needs are paramount in that regard. Mine needs are only secondary.

Love that verigated thread! I have the witches pattern - somewhere.So happy you got a good soaking and more on the way.

Like your new embroidery pattern; I just got some embroidery pieces in the mail--(if an) when I finish my butterflies I will begin another project--5 more to go...still x-stitching on The Luna Green one...

We all need routine, I think. I know you made your chowder, and it looked very tasty. Fun to see the ladies all quilted up. Seeing that wet ground in your area is comforting.

Yeah for an inch of rain. That will help and yes, getting to the weeds after rain is always on the agenda, even if it doesn't always happen. The new embroidery project is a delightful. I have two friends who work many Crabapple Tree designs. I don't seem to have the patience to do them. Corn Chowder sounds wonderful.
Pat

I don't usually get wildly excited by thread but I have got to have some of that variegated thread. Just having it in my thread box would make me happy and I know it will get used. Pleased you have had rain and it would also be nice here. I've had to water the garden daily to ensure everything stays alive.

That thread is gorgeous! I love variegated threads but haven't seen that particular colourway. Your bag ladies are such fun - there's a ton of details on each one. And yay for rain!!!