You might not see much progress, but a whole day's effort was put into one quilt block yesterday. It still isn't finished. The kitties weren't much use in this. They just wanted to go take naps in their Clubhouse. 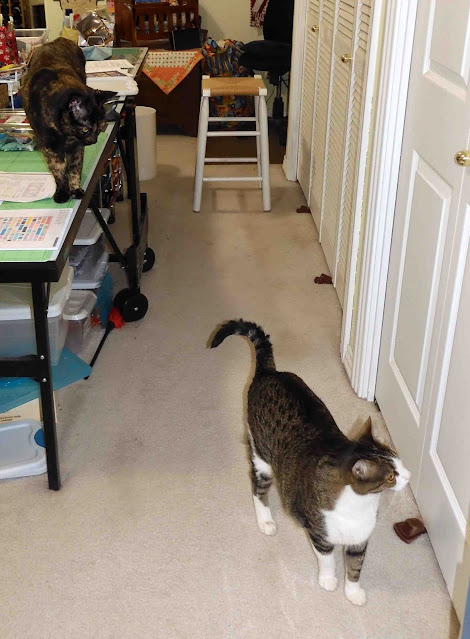 They always go bounding downstairs when I head into the sewing room. I think, "Oh, the kitties are going to help me sew today! How delightful!" And then they just stand at the door to their clubhouse meowing and yowling and begging to be let in. There are a couple of things to notice about this picture. First, Sadie is so tiny, nimble, and strong that she bowls Smitty over as they jump into the access point. This time, I made her wait and give the big guy time to get settled. Also, there are doorstops at each door. This is because Sadie is so strong and clever, she can open the door herself. She'd just as soon move out and have her own apartment. If we let her, she'd just live in the Clubhouse, coming down only for meals. Cats. Can't live with 'em, and can't live without 'em. Especially that last part.
These New Mexico Kitchen blocks are cute, but they are time-consuming. I was able to finish off the fusing yesterday. 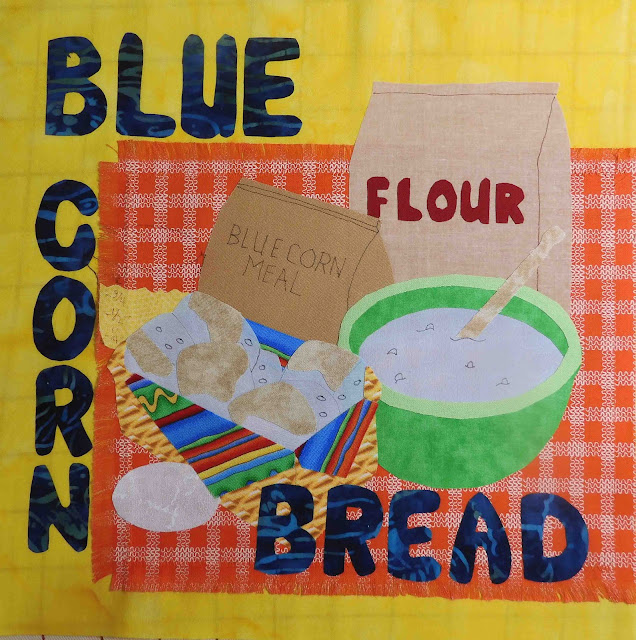 Then I went to work on the machine stitching. You can see I've filled in the measuring cup on the left. I'll be hand-embroidering measurement markings. Also, I'll be hand embroidering the lettering on the "Blue Corn Meal" bag, and adding in some bits of corn to the bread and the batter. 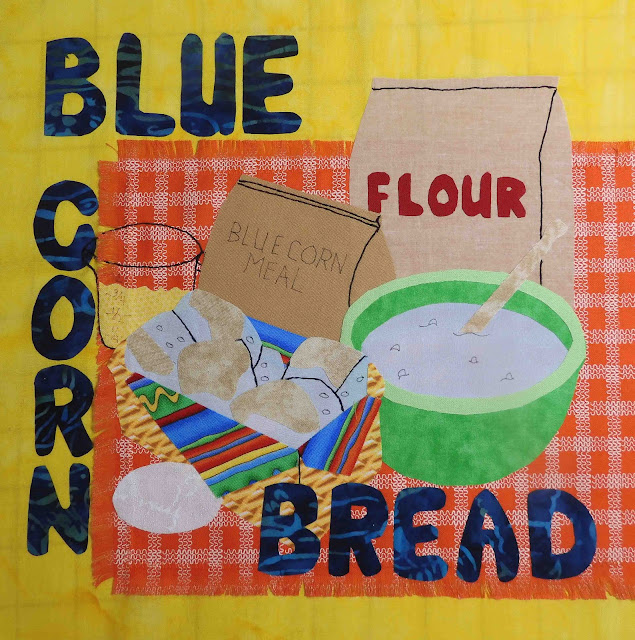 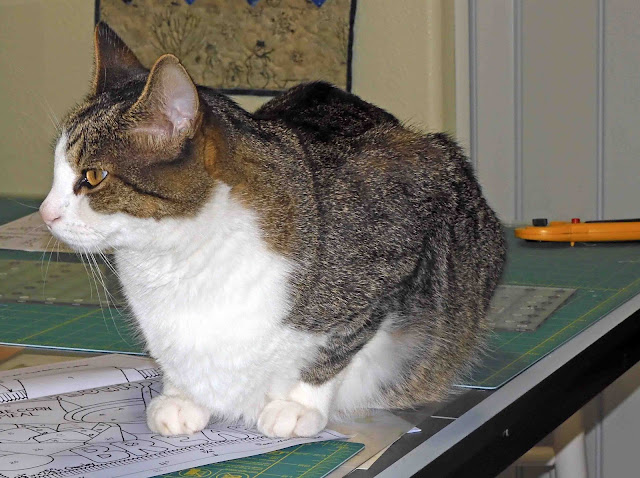 I was working away at the top-stitching. It's probably about halfway done now. The blue lettering took a good part of the day with all those cut-outs on some of the letters. 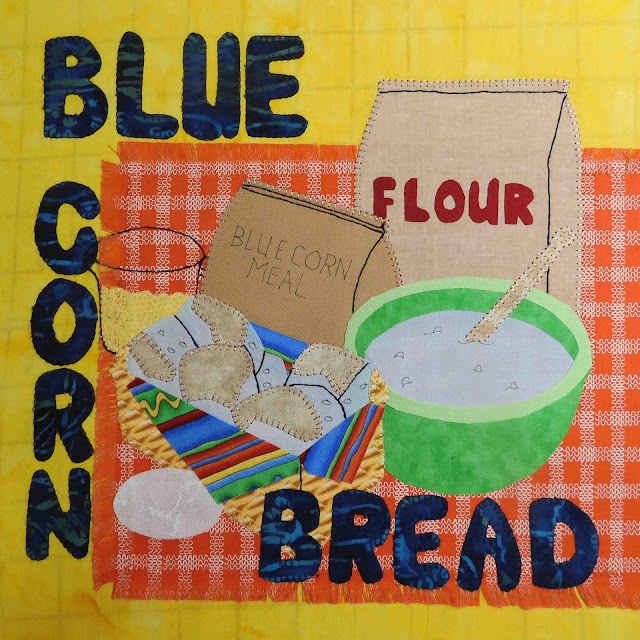 When I left it, I was lined up to stitch the "Flour" lettering. I'll use red for the cloth in the bread basket too. After that, there won't be much left. 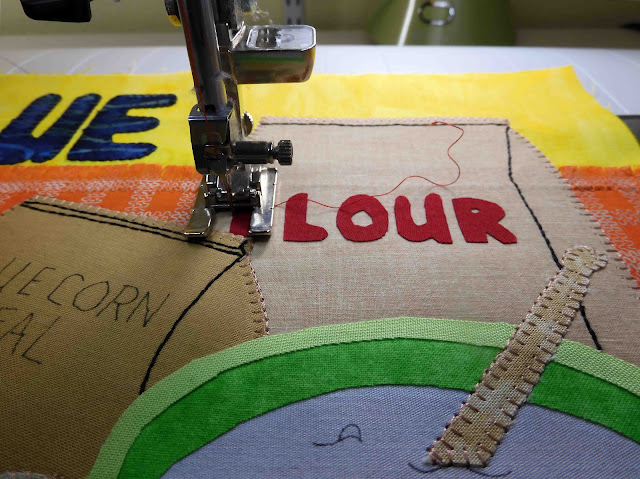 The blocks have two borders, and I'm hoping to get this one finished today.
It was time to stop for the day. I had soup on the menu, and it took an hour to make it. While that was simmering away, I made this cherry pie for two. I use Pillsbury crusts for these. In such a small pie plate, I only need one crust from the box of two. The bottom crust is cut, and then I've been using the scraps to make a top. Yesterday I was feeling lazy, and so I just kind of draped it around the top and then brushed it with egg white. I was expecting a really terrible looking pie, but it turned out kind of okay. I imagine it looked a lot worse after we ate it. 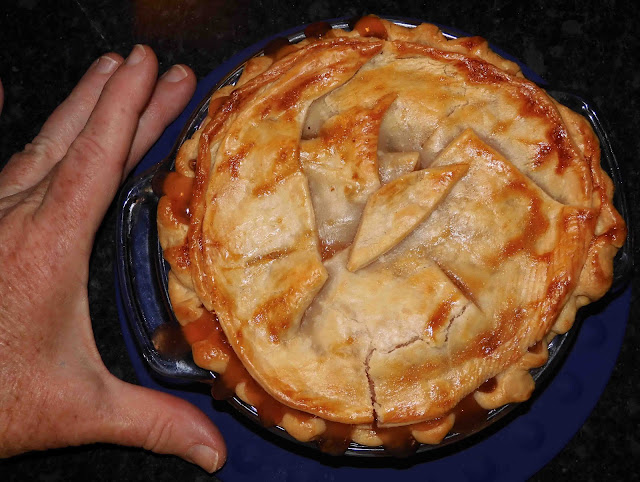 This morning I was searching the blog to see if I'd given you the recipe for last night's soup. I couldn't find it anywhere, and this is something of a travesty. If you like hearty soups in winter, you simply must try this one. I didn't take a picture of mine, but I found this image online. It looks pretty much the way mine looks. 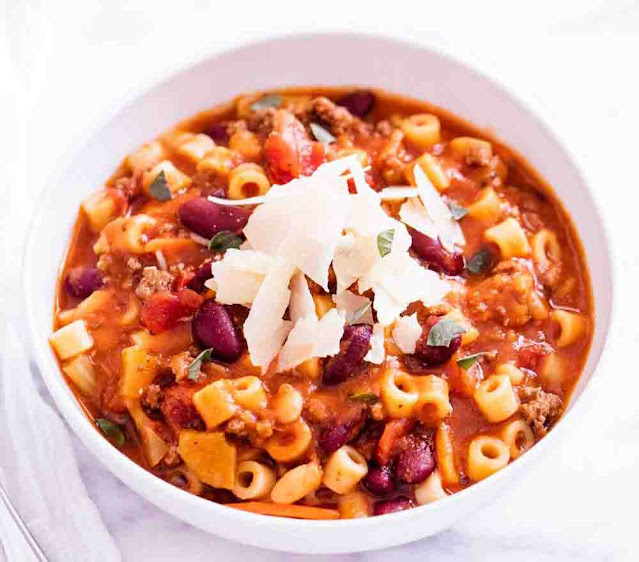 (image source)
If you've ever eaten at Olive Garden, then you might have had their Pasta e Fagioli soup. We love the soup. It's been a while (years) since we've been to Olive Garden, but we used to go there just for the soup and a side salad. Oh yes, and the bread sticks. So yummy. Quite some time ago, I found a copycat recipe that was very close. And let me just tell you, this recipe makes what we call a sh*t-ton of soup around here. We usually have it two nights, and then I freeze whatever is left. I was going to link to the recipe, but then realized I've adapted the recipe some, and so here's how I do it:
Pasta E Fagioli from Olive Garden (Copycat)
adapted from CDKitchen
Serves a crowd
Ingredients:
1 1/2 teaspoons olive oil
1 pound ground beef
1 cup chopped onion (about 1 medium)
1 1/2 cups slivered carrots (available pre-packaged in the produce section)
1 cup diced celery
28 ounces canned diced tomatoes
1 can red kidney beans (16 oz.)
1 can white kidney beans (16 oz.)
5 1/2 cups beef stock
1 1/2 teaspoons dried oregano
1 3/4 teaspoons ground black pepper
3/4 teaspoon Tabasco sauce
24 ounces pasta sauce
1 cup uncooked ditalini
Shredded Parmesan cheese, optional
Directions:
Saute beef in oil in large pot until beef starts to brown.  Add onions, carrots, celery, and tomatoes and simmer for about 10 minutes.
Drain and rinse beans and add to the pot.  Add beef stock, oregano, pepper, Tabasco, pasta sauce, and ditalini.  Simmer uncovered until celery and carrots are tender, about 45 minutes.  Ladle into bowls and sprinkle with fresh Parmesan cheese if desired.
* * * * *
We had some excitement here this morning. Smitty was gazing out his window, minding his own business...and by that I mean, the field is his business...and his territory. 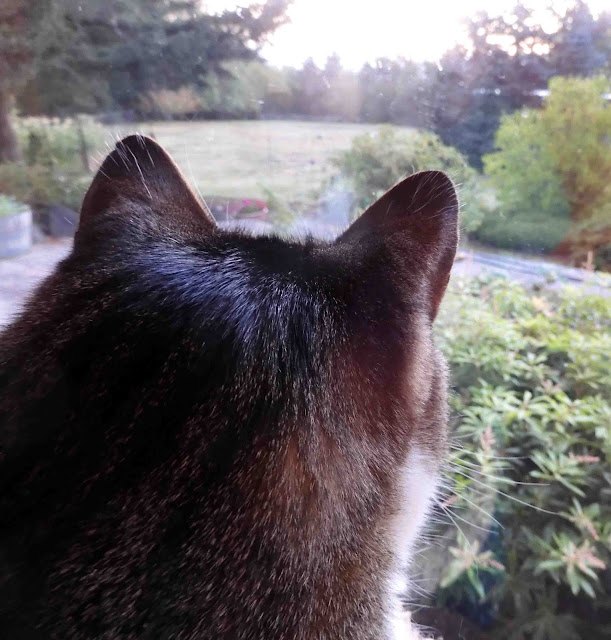 When who should show up but Bob, the cat. He was out hunting gophers. In Smitty's field! 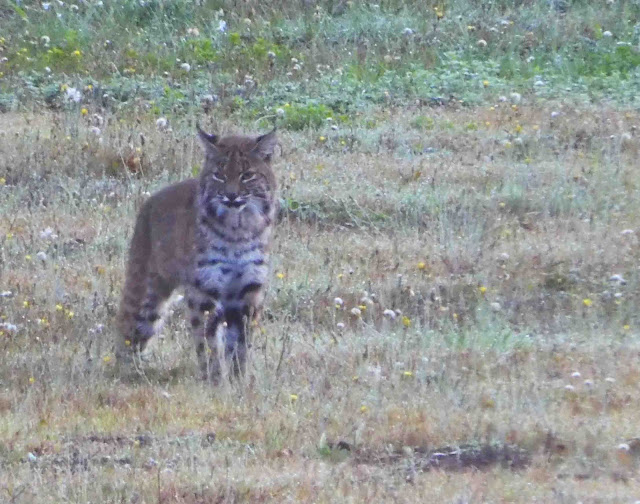 The light wasn't great for these shots, but isn't he a handsome fellow? 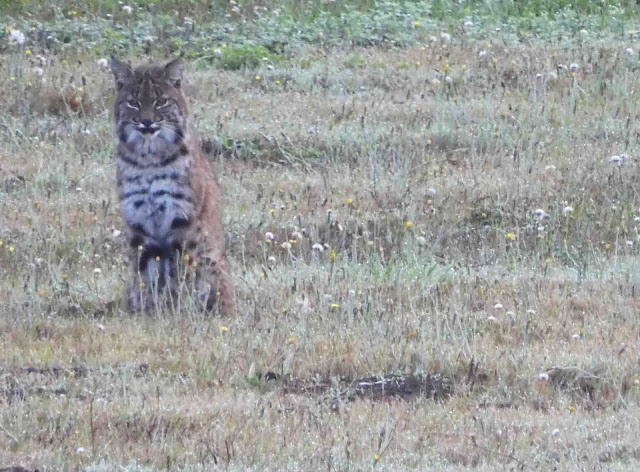 Not as handsome as Smitty, mind you. 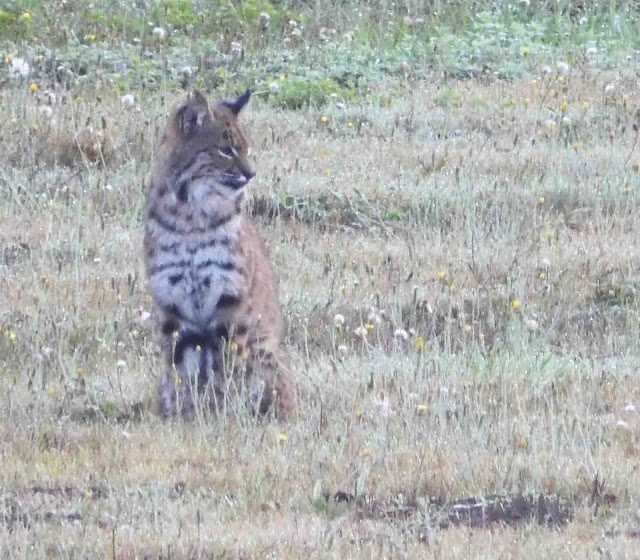 So, he sat there a while, and then he moved on. Smitty does the same thing, but in a more compact form. And Smitty's tail is much more impressive. 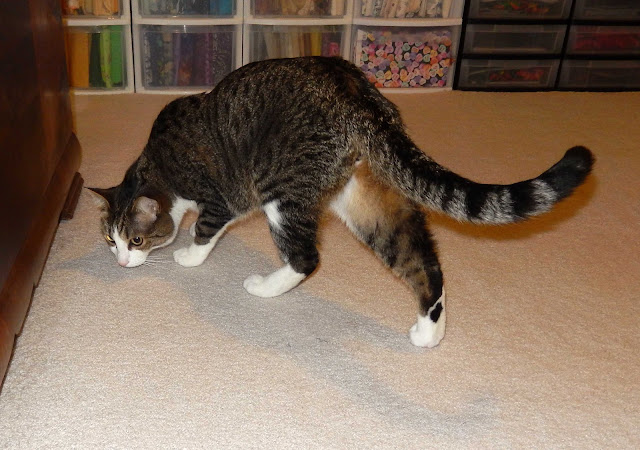 So today I'll get back to working on my quilt block. I'm hoping to have it finished by the end of the day. Since our September vacation turned out to be a rather eventful non-event, we planned a short outing for ourselves to the Oregon coast next week. I'll say more about that in tomorrow's post.

Those blocks look like they take a lot of work--this one is looking really good.
Was that "Bob, (comma) the Cat or a bobcat??? I couldn't tell...
Anyway, very pretty fellow--but not a match on Smitty;)))
hugs, Julierose

That recipe looks yummy! Quick question -- is the ditalini cooked when you add it or does it cook in the recipe when simmering? Thank you for sharing!

Love your new block. Great soup recipe, I may have to try it!

What a pretty cat. Looks like he has some wild in him.

The recipe sounds delicious and I will try it out in the near future. Bob the cat is rather beautiful but not a patch on Smitty who is a very elegant young man.

We have those cats here. We don’t see them often as they tend to stay in the more wild environments of the hills. During droughts and fires we see them more often. Bob looks like a well fed fellow. One day you will need to show everyone how you organize your sewing room and what you chose for tables, bins etc. I’m curious about the picture where Sadie is on the table waiting for the Clubhouse to open. What is the wheeled thing? I also see 2 chairs. Do you use each at a differnr station or is one for a cat to get a closer look?

That soup recipe is currently in the hands of Resident Chef - I remember Olive Garden and really miss them. They closed here in Canada a number of years ago - at least a lot of them did, not sure if it was them all. Your corn bread block is looking amazing - what a huge amount of detail in one block!
AND - that bobcat - amazing!!!!!!!

Thank you for sharing your Pasta E Fagioli recipe! It looks really yummy. I love "soup season"! In the eleven years we've lived at the camp, we've seen a bobcat twice ... both times in the driveway near our RV. We don't even see them on the nature cameras we have up. And Smitty's tail is *definitely* more impressive!!! :)

Your block is looking good! You amaze me with your talent! Thanks for the soup recipe - I will definitely make it since my husband loves the Olive Garden soups. That bobcat is a handsome fellow - just love his face. We recently returned from a sanity trip to South Dakota’s Custer State Park and the Badlands. We have been out there many times but we saw so many more animals this trip - so fun! Bison, wild burros, coyote, wild turkeys, pronghorn, deer, mountain goats, and bighorn sheep. I also ventured into Betty’s Quilt Shop in Rapid City and what a treat that was. Lots of regional fabric and old sewing machines and it was just a delight. I recommend to anyone in the area, plus it is right next to a coffee shop so others in your group have something to do while you shop!

Your blue cornbread block is moving right along. Cool photos of the Bob Cat. I imagine Smitty was none too pleased with the interloper.

Oh, Bob! How I wish he would visit us here! We hear reports of him not far from here but have never seen him in our neighborhood, maybe because we have too many woofies. Your block is amazing, as always, as is Smitty's tail.

Bob, the cat, doesn't look anything like Bob the Street Cat... great movie by the way! Beautiful creature, thanks for the photos.