Well, I have to start out today's post with an apology. When I took the pictures off my camera just now, I was waiting for the appearance of a cute picture of Mike and Smitty watching TikTok videos together. Only then I realized I'd formatted my memory card after I'd taken the picture. Duh. I usually format the card every time I take pictures off the camera. I've had problems with the card becoming corrupted if the pictures are simply "deleted," and so I'm in the habit of formatting. So I did my slow stitching, took the picture, then forgot all about the picture and formatted the card. I will regret losing that picture for the rest of my life. Maybe I can get the two of them to pose again, but I doubt it. Because you know...cats. And you know...men.

Instead, I have only this picture of Smitty...shocked! I tell you, shocked!...that I should forget about any pictures I'd taken of him. 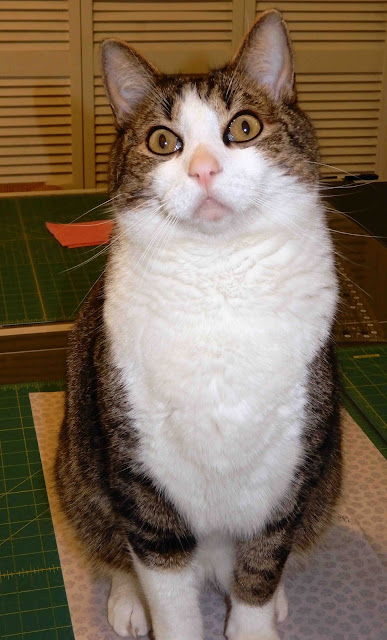 And Sadie is wondering why I'd even bother taking pictures of Smitty, and why I would care if I'd deleted them, accidentally or otherwise. 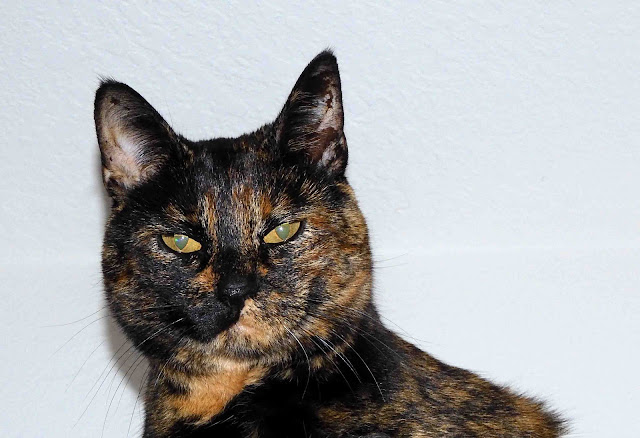 But oh well. The day goes on. I drowned my sorrows in this batch of Red Root Relish. My yield was 9 half-pints. 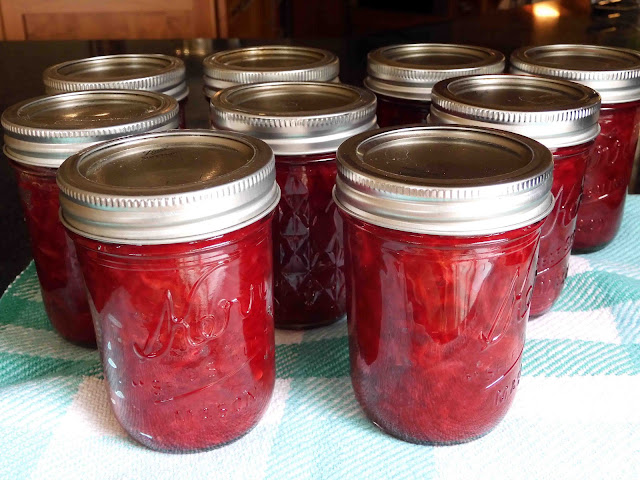 I wasn't sure what to expect from this. It's made from beets and red cabbage, and it has some horseradish in it. I expected it to have some kick. It doesn't really, but it's very tasty. It's a little like red cabbage sauerkraut, and it should be good on something like brats. It's supposed to taste best after sitting for a month, and so I'll try to be patient about opening the first jar. I'm thinking we'll take some brats on our next camping trip and open a jar then. As for the recipe, you can see it for yourself right here. I found it originally in the Ball Complete Book of Home Canning. Then, I found it online with metric measurements and some ideas about possible additions. I made it as written. It might be good with a little bit of crushed red pepper, but I like it as is.
Okay, and then I hoed the garden and watered the flower pots. I was on my way to the shower when I sat down at the quilting machine and finished quilting Tuxedo Tales. 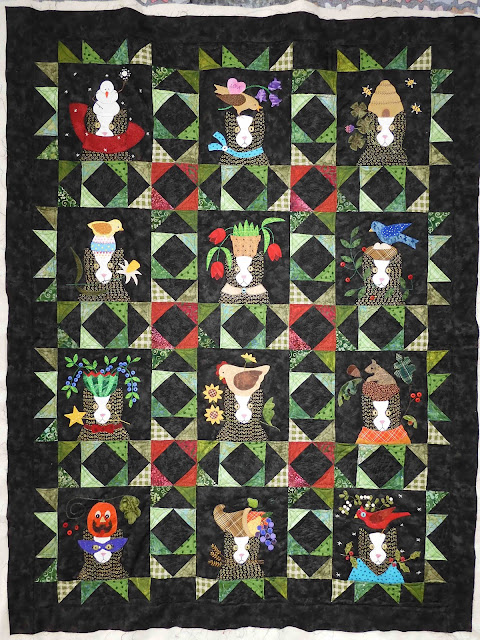 Here's a little close-up of how I finished it off. I've sworn off templates since the last debacle, and so my lines are all done free-hand these days. 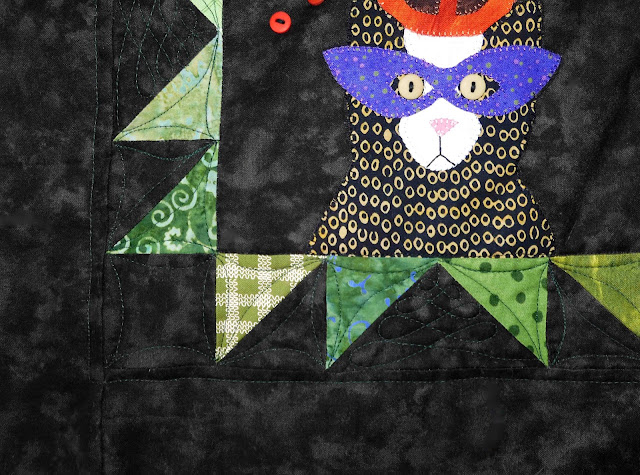 Then, and only then, did I stop for a shower. Afterward, I added the binding. As I mentioned in a previous post, I wasn't happy with the selections for a binding from my stash. I even went shopping for something else, but didn't find anything. Then I relocated the fabric used for the cats, and that seemed like the obvious choice. 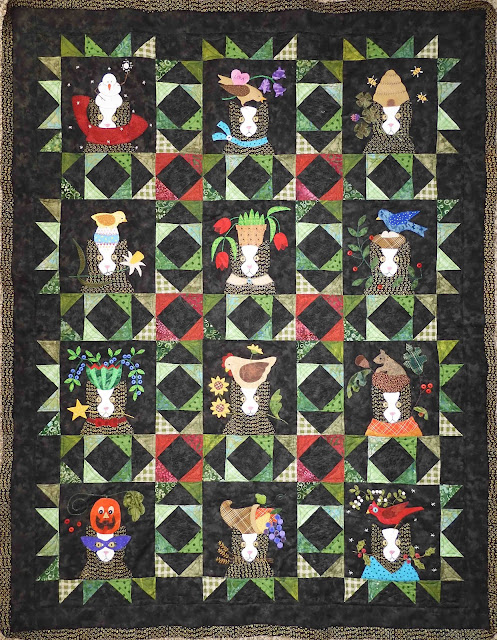 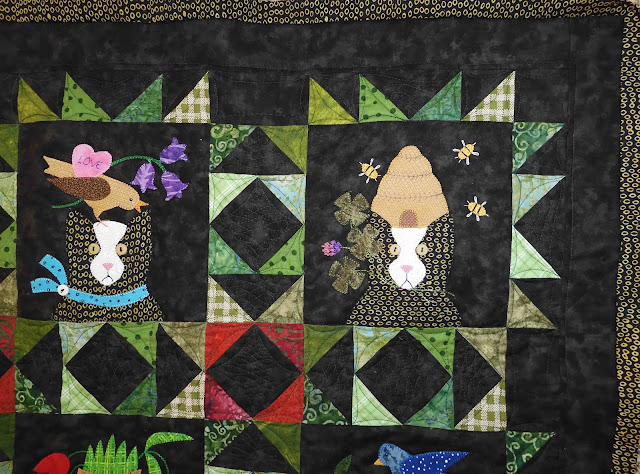 So now, it's folded up in the living room awaiting clipping and sewing. It's a smallish quilt, and so it shouldn't take too long to finish.
Next up, I'm hoping to quilt the Chicken Buffet quilt before the month is over. It's relaxing over my sewing chair, and I'll start on it in a few days. 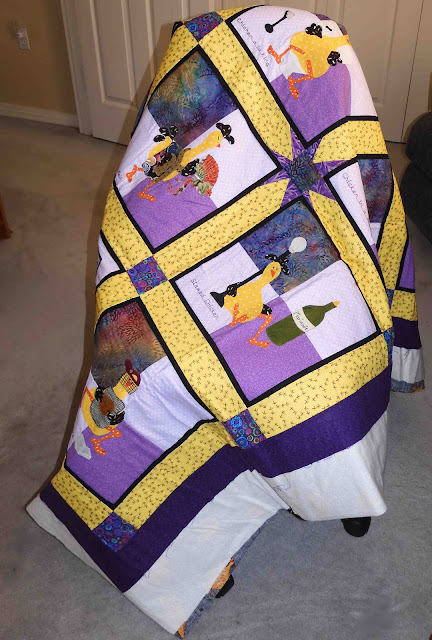 In the meantime, I have a couple of projects to start. One will be the next challenge quilt for The Endeavourers. Our next prompt is "The Sea." I have some ideas about it, but nothing set in stone yet. Also, I need to make a mug rug for the Teal Mini Challenge, a fundraiser for ovarian cancer research. I've tried unsuccessfully to contact my partner, and she hasn't attempted to contact me either. So...kind of disappointing...it makes the swap a lot less fun.

As I mentioned in an earlier post, Mike and I are participating in the Pathfinder study today at Oregon Health & Sciences University. We're having some blood drawn. As I understand it, the blood will be used to check for "cancer signals," which can indicate the presence of cancer in different parts of the body. Of course, we're both hoping for a negative result. If the result is positive, then we'll submit to other forms of testing, which could include things like colonoscopy or mammography. Continued testing would be at the expense of the study, but any treatment would be under our own health insurance coverage. So anyway...I have to say it's a little scary to embark on this, but of course, early detection improves chances of survival from cancer. And...it's just a study. If it works, it could be a boon to future early cancer detection and treatment. You can read more about it at the link I provided earlier. After that, we'll probably get some lunch somewhere with outdoor dining.

With that going on, I'm not sure how much sewing will get done today. On the other hand, it's an excellent way to avoid housework. For now, I'll get back to my slow-stitching. There's still some time before we need to head out.

Tuxedo Cats is really lovely--I do like that border--just perfect...
Hope the testing results turn out okay...
Hugs on a rainy day--finally;))Julierose

I'm not part of that group for mug rug swaps but I'd be happy to swap with you. Just let me know. Love the cats quilt, great purrrsonalities.

Love the cat quilt. I'm not part of your mug rug group but I'll trade with you if you'd like.

OHSU is a good place to go for cancer study. Having been diagnosed with Sebaceous carcinoma of the right eye this year, I have gone through a lot of tests and operations. They are good doctors. The only problem I ran into was that they are all so specialized sometimes it is hard to know who to go to when something unexpected occurs. I have a surgeon who deals with cancer, and octoplastics (sp?) who deals with my eye and reconstruction, then the oncologist, my primary and just recently a cornea specialist. I think in general mot people won't have that many doctors but they are all great, and they take good care of you! The fact that one of my cousins worked there, and just retired the beginning of the year, helped me navigate through the system. Sorry, just my two bits about OHSU!

I love the picture of Smitty looking shocked 😳 I have seen that face on my kitties as well, especially when I feed strays or my neighbors cat, Remy, who likes to dine out at my house everyday! Sometimes they will text me just to make sure that he is still around, if they haven't seen him in a while as they know he likes to hang with my kitties.

I had always thought of donating my body to science for study - even if only for a good laugh.I got that shocked look from both my furkids when I returned from a grocery run with Mom and brought back NO treats. I think the repeat of the kat fabric for the Tuxie binding brings full circle of the character to it.

It's always a sad feeling to realize you've lost a good photo for any reason. Tuxedo Cats is so cute and you made pretty quick work of the quilting. You are definitely on a roll with the finishes. Sounds like an interesting study and it would be very helpful if they could find a blood test for cancers.

Oh, sorry about losing the photo. Would've been fun to see that one, but the photos of Smitty and Sadie brought a smile to my face. I bet that relish would be tasty on pork chops too, maybe? I like the use of the cat fabric for the binding on Tuxedo Tales; it seems to tie it all together. I'm hoping the tests come back negative too.

That's a bummer to lose the photo - it's always the special ones that tend to disappear. Thank you for the link to the beet relish recipe - I've printed it and it's going in the 'ideas for Christmas-giving' file. Tuxedo Cats is adorable - I love the expressions on their faces.

Ya hoo!! The tuxie cats are looking fantastic with their quilting :) Can't blame you for swearing off templates....they are DANGEROUS! Like Smitty is to small furry things in the yard ;)