Our morning appointments went smoothly yesterday. We each gave up four(!) vials of blood. After that, we decided that our blood loss warranted a lunch out. We found an outdoor dining area and enjoyed the sunshine and warm temperatures. After that, we headed for home and a rather lackluster afternoon. We had our afternoon cups of espresso and then we both took naps. It was mid-afternoon by then, and it seemed too late to start anything, and yet too early not to. It seemed like a good day to catch up on a little housework and then settle myself for slow-stitching the afternoon away.

First, I finished off the 8th block for Dancing Chickens and Flying Pigs. This one is called "A Walk in the Park." 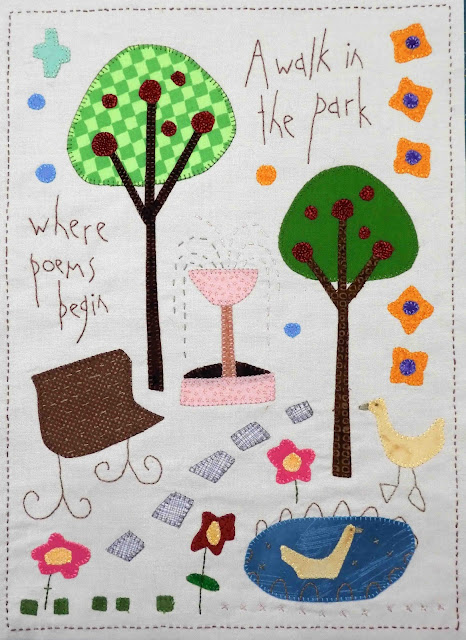 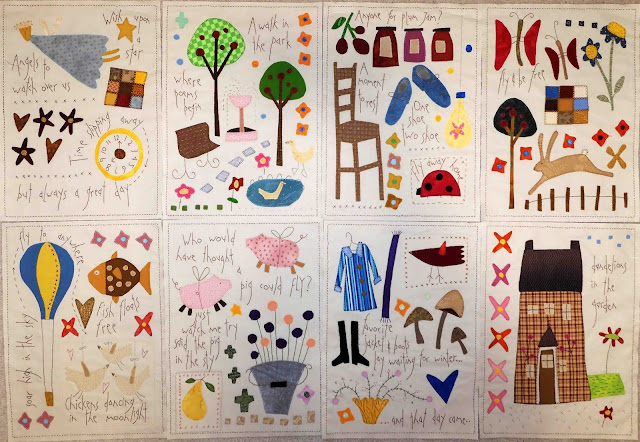 With that one finished, I went to work hand-stitching the binding for Tuxedo Tales. I had in mind to turn two corners, which I did: 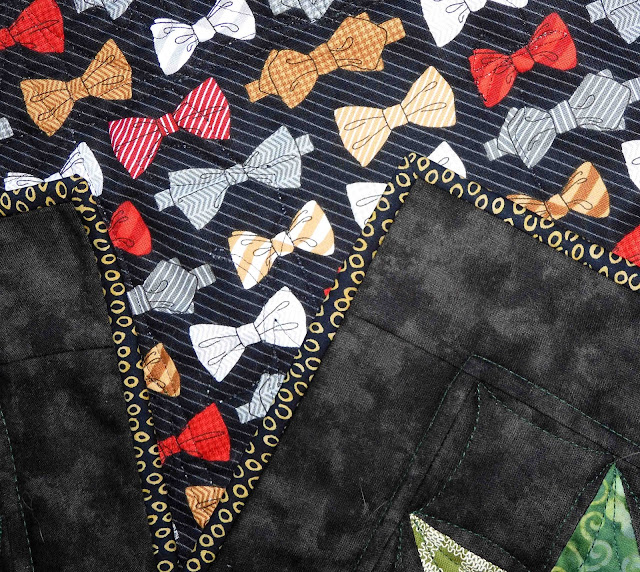 It was getting close to dinner time by then. Shrimp was on the menu, and I first needed to shell the shrimp. Then I tried something new with a recipe I've been meaning to try for a long time.

Here's the thing: I've had to figure out a way to keep myself organized with my recipes, frozen foods, and cooking, kind of in the same way I use a white board to keep myself organized for quilting. Here's the method to my madness: when I make up the week's menu before each grocery shopping trip, I mostly choose dishes from the Cooking Light Diet. We aren't losing weight, but we're maintaining our previous weight loss despite all the desserts I can't resist making. So there's that. But we also have our old standby favorites. For example, Mike loves his Chicken Marsala, and so I'll add in one dish for the week from our favorites list. Then, I'm also having to use the "bargain meats" I pick up at the grocery store that go straight to our chest-style freezer. For a while, meats were piling up in there, never to be seen again. And so, I make myself choose something from the freezer to use. Finally, I have a long list of "Untested" recipes on the Paprika app, and so I make myself choose something from there. Before Paprika, I had stacks of recipes printed off and sitting on my desk. Now, with the app, they're out of sight and out of mind, so I have to make myself do it. I know. This is a very complicated form of discipline, but it's how we roll here at the Three Cats Ranch. One must be disciplined when one lives with cats. And a man.

So anyway...I tried this "untested" recipe for Shrimp Fajita Bowls. This was really good. Now, I've reclassified it from "Untested" to a "keeper," which basically means checking and unchecking some boxes on the app. 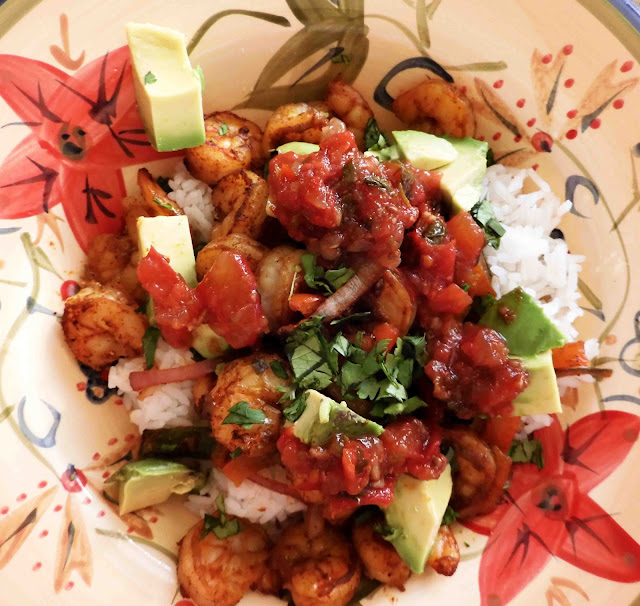 It's made by slicing thin some red onion, red bell pepper, and jalapeno. Then the vegetables are mixed with some spices and the shrimp. The recipe will tell you to broil this, but I don't like broiling. Instead, I roasted it in a 450° oven for 15 minutes, stirring every 5 minutes. Then it was piled on top of some jasmine rice, and topped with chunks of avocado, chopped cilantro, and salsa. Yum. It took a while to shell the shrimp and slice up the veggies, but then it cooked itself. It would be a good one to prepare ahead, and then an easy finish at dinner time. It's also a pretty good camping recipe. The whole mix can be prepared ahead and frozen to take along.

After dinner, we always check through the laundry room window at Smitty on the catio. There, we found him blissed out in the waning sunlight. 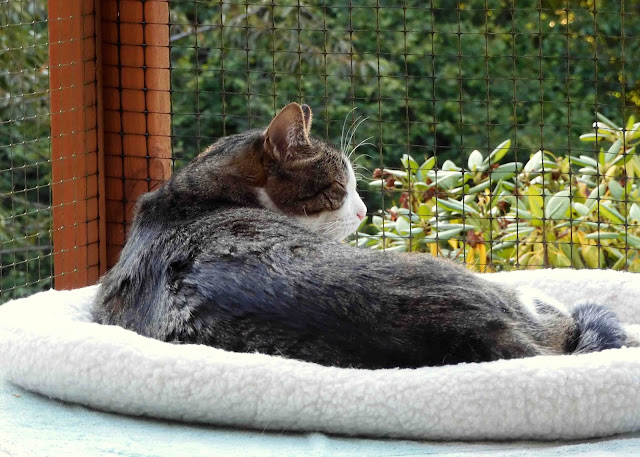 We had to go outside to find Sadie in her little house. There's a warming pad inside the little house that only activates when someone lies on it. We're pretty sure she spends her nights out here. 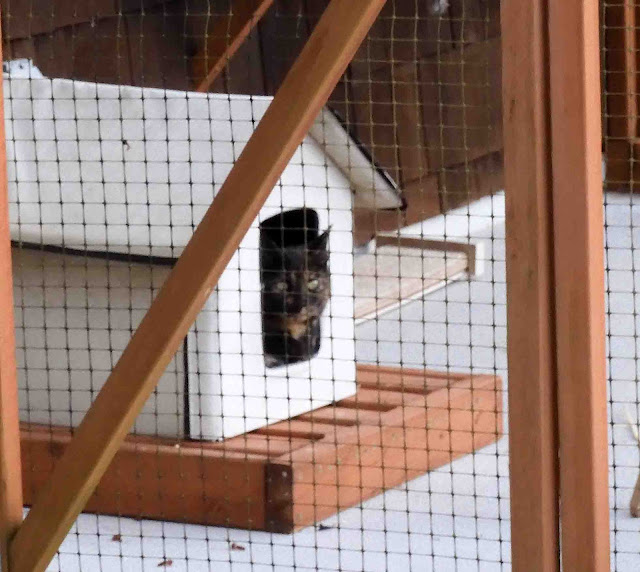 As I mentioned in an earlier post, this has been my week for appointments. Today I'm getting my eyes checked. The eye exam is welcome because I really want some new glasses. I've never liked the ones I have, and I can pick some new frames this time around. I'm not looking forward to the foray into Costco though. (I get my eye exams at Costco.) Costco is one of my least favorite stores. I haven't been since my last eye exam, which was before the pandemic started. I can't rule out the possibility that I'll need to murder someone. This is offered up as a warning to anyone who might be shopping at the Wilsonville Costco today. Steer clear of me.

If I survive the trip to Costco and don't get arrested for murder, I'll get back to my slow-stitching. In fact, there's no time like the present, so I'll get started on that right now. Maybe I'll have a finish for tomorrow's blog.

Your finished blocks for "DC's and FP's" are just so neat--they make me smile...hugs from afar Julierose

I have avoided Costco since March. Last week I stopped at their gas station and was amazed at how few cars were in the lot considering it was the the first few days of a new sale flyer. I quickly masked up and dashed inside. Absolutely painless! So much so that when I headed to the registers to check out I walked right up to one with no one in line. Have faith! Hope you have a similar experience!

We will be finally getting a Costco this fall and I am uber excited about getting to go there in two years when the newness settles down and the pandemic is under control. Until then I will rely on local markets where there are plenty of people who seem to need killing. The idea of an untested folder in Paprika is brilliant, I am going to organize my app just as soon as I can force myself to do something. This is why I rely on you, just brilliant. No fish or seafood recipes for me, though, even though Jack loves both. I am sure my brother chasing me with fish guts and my mother insisting that shrimp and lobsters are exactly (EXACTLY) the same as bugs has nothing to do with it.

I have never shopped Costco - I rate it along with WalMart which I heartily boycott. I'm allergic to shell fish, but that recipe and dish looks great! Let me know when you are ready to add the FP pattern to your sales page, I would love it.

Interesting comments on Costco! It is the only place I go shopping, apart from a farm shop some miles away (but so worth it). I go to Costco once a month or so, I like the space,and organisation....so different from our local supermarkets which are small, and appear to be full of rude people....just assuming from the comments on our local residents' blog.

Believe it or not, I've never set foot in a Costco. I have been to Sam's and was happy to give up my membership. I just never enjoyed that type of shopping, even if it saved me some cash. You have a good method for your recipes. I still have the paper method; I really dislike using my phone or computer while trying to make a recipe. Not sure why. I need to try more of the recipes I have in my "to try" stack. Dancing Chickens and Flying Pigs is looking good. Congrats on the Tuxedo Tales finish!

I have a love/hate relationship with Costco. There are a few things that we like to buy there but the store itself is a lesson in frustration, particularly now. The local one (nearly 45 minutes away so it's not really local) is only allowing a certain number of shoppers inside so you have to line up outdoors. But when you get inside it's every man/woman/child for themselves and there's no social distancing measures in place. We mustered our courage a few weeks ago and went but we won't be returning anytime soon. I won't be buying glasses there again either - my last pair was set incorrectly and I never could see properly.

Yum on the shrimps and such cute kitties!! Did you survive Costco? Every optical shop we've seen has closed up and aren't seeing people. So good luck there. We only have Sam's Club membership now, I think bc they are more prevalent around the country. Anyway, we use the scan and go app... As we choose an item, I scan the barcode of the item using the open app on my smartphone. When we have finished shopping, I simply swipe the green bar to pay by credit card. It pops up a QR code I show the door clerk, and out we go. No contact, no lines, no piling stuff on conveyor belts, no unclean buggies. Last time we were in store (a while ago) we saved about 30 mins, just not standing in checkout lines. Fantastic experience!

Oh! So fun! I love your cheerful blocks!

What fun blocks! Hope your shopping trip goes uneventfully, and you don't get arrested! Happy stitching!

Oh my your Dancing Chickens and Flying Pigs is going to be an awesome quilt. You can't help but smile when you look at the blocks!! My that recipe sounds really good! I use Alexa to save favorite recipes and it's nice to have them there to scroll thru for an idea for dinner.

I love those whimsical blocks. I have given up on BJs and Costco. With just the two of us, I don't need the big box stores. I re-enrolled in BJ's last year and realized that the items that I had hoped to get large quantities of were not available and what was available I certainly didn't need in large quantities. I miss their meats, but not enough to make the trip. Good luck with the eye exam. Love the kitty pics.

Is that mesh strong enough to deter coyotes for having a meal of your babies?

You made me laugh out loud about the Costco adventure... I get it! I can't even manage to go into a place like that! Hope you didn't have to murder anyone and safely got your glasses and got out quickly!
I love your Walk in the Park block... the opposite of a Costco outing!
Thanks for taking the time to link up with the Slow Sunday Stitchers!

I think I'm lucky as I have a Costco and a Sam's Club very close AND they both have a special time for we "elderly" over 60 shoppers. I can get in and out in 30 min. I'm not much of a shopper and dislike all stores. I get what I need and am gone. I go to a good produce store and that's it for me and shopping. Now of course fabric stores are the exception ..............