Okay, so you have to be super old to get that title. It's my adaption of a song from Fiddler on the Roof. Please tell me you remember that. And if you're prone to ear worms, as I am, then you'll have one now. You're welcome.

So anyway...masks took up most of my day here at the Three Cats Ranch yesterday. First though, I made another 4 pints of zucchini relish. That's probably all the zucchini relish I'll do this year. I have some other ideas for the zucchini harvest to come. 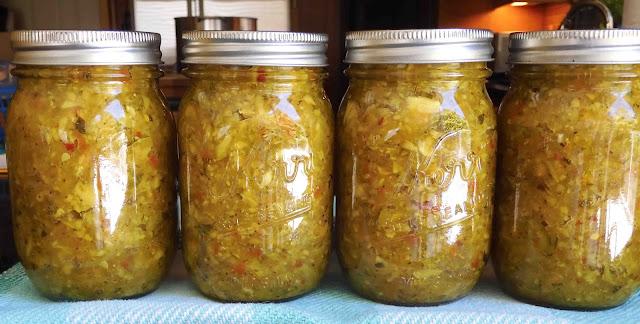 After that, I got to work re-making a few of our masks. Two of the six I made for Mike and me were the right shape, but I wanted to try adding a wire. Many people have offered up suggestions about how to do this, and I think it kind of comes down to personal preference and supplies on hand. I happened to have some jewelry wire on hand. I had it in two sizes, and I settled on this 22 gauge wire. 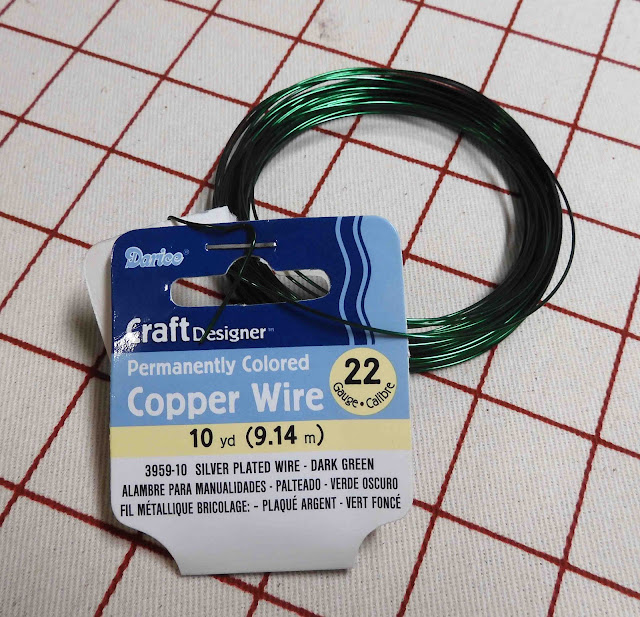 It was leftover from a short-lived foray into jewelry making from way back in 2010 when I tried making these little Christmas tree earrings. I actually like the earrings and I wear them at Christmas, but I never did anything else with this. 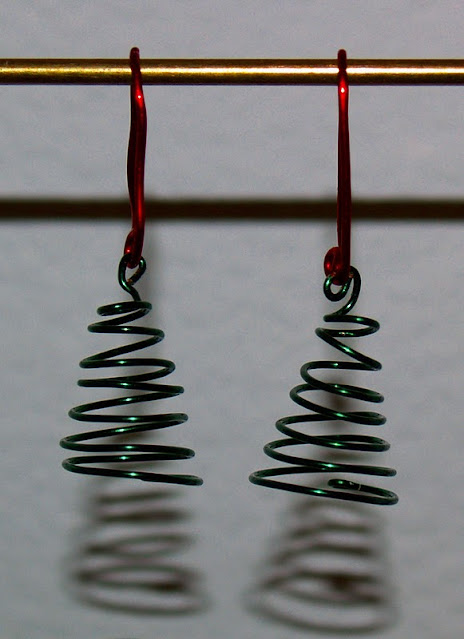 Someone suggested putting a gold bead where the green meets the red in those. I think that's an excellent idea, but I never went any further with it.
As for the masks, this next one was already made in the shape we like. I've been top-stitching all around the whole mask when I attach the elastic. This one happened to have a wide enough "channel" around the mask that I could poke the wire between the stitching in the seam and thread it through the channel formed by the top-stitching. 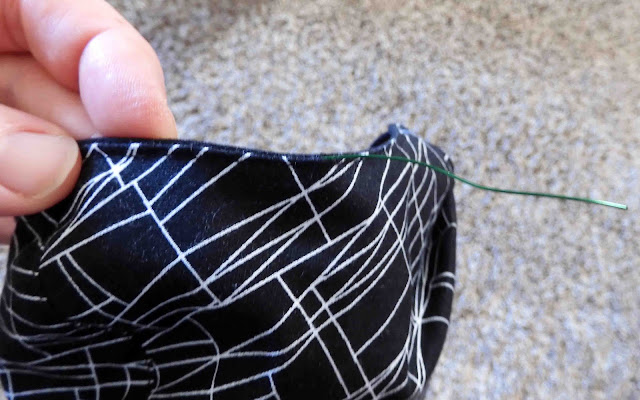 It was a little tricky getting it past the center seam, but I got 'er done, through sheer brute strength and dogged determination.

The second mask was stitched too closely, and I couldn't work the wire through. Instead, I used a piece of double-fold bias seam binding to create a little channel and I threaded the wire there. This seam binding has been in my stash literally for decades, and blue was the only color I had. So, yeah, that's what I used. 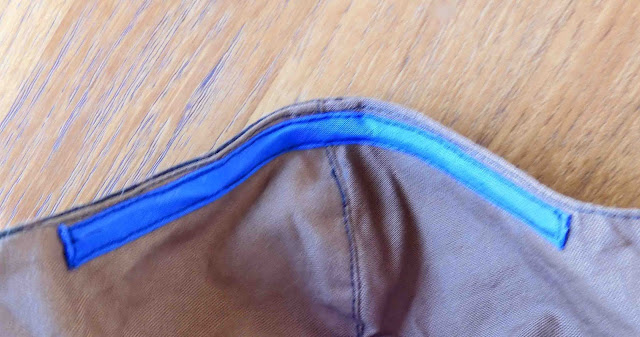 The color doesn't matter since it's inside the mask. From the outside, it looks like this. 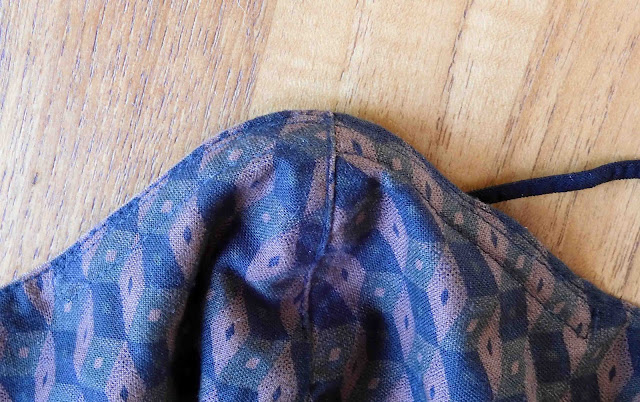 That ended up being my preferred method.
I wanted to make two more masks for myself using the Creative Grids template. I tried first to make the top-stitched channel, figuring I could always use the seam binding if it didn't work. I'll tell you how I did this, but I don't recommend it. It ended up taking as long to make this mask as it did to do the rest all put together. Either way, I start out top-stitching very close to the edge. 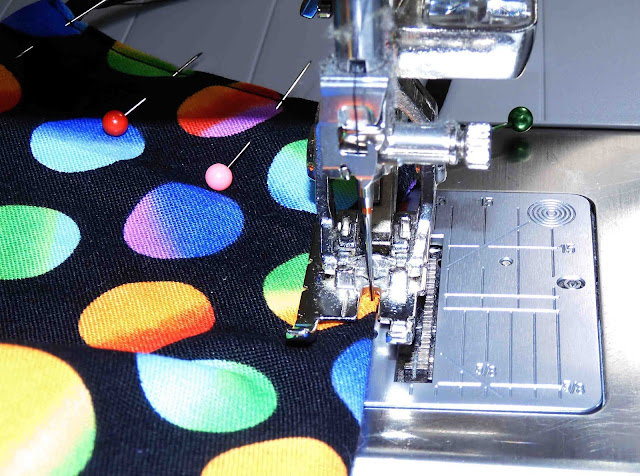 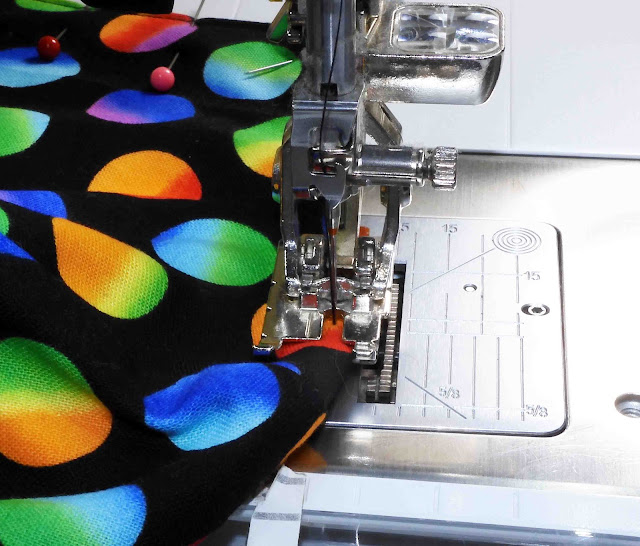 And this would have worked fine, except I had a heck of a time getting the wire pushed through the center seam. I ended up doing the second one using the seam binding, and that would be my preferred method from here on. So here are my three masks. I know...no cats. What the heck is going on here? 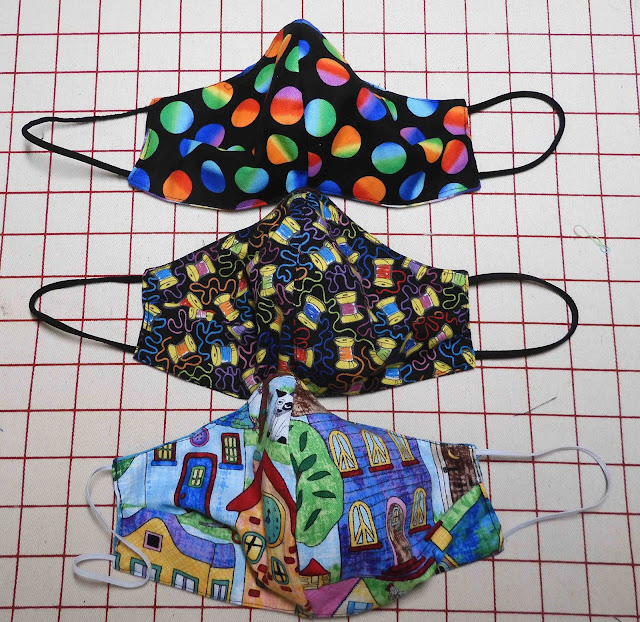 So that took up most of the afternoon, but I still finished quilting all the sashings on the Tuxedo Tales quilt. I laid it out for a picture, but the quilting doesn't show up very well in this image. 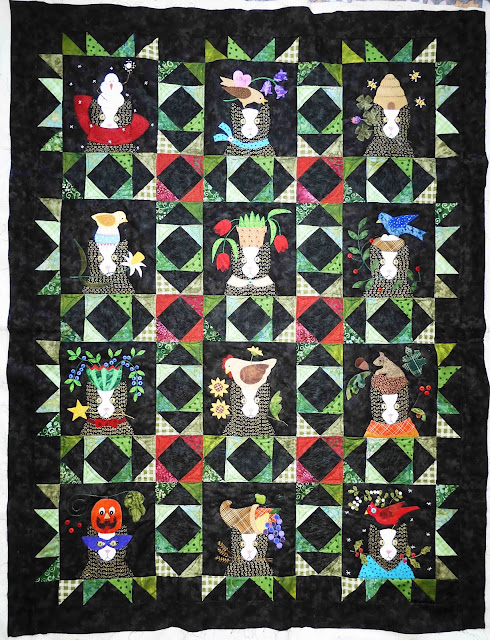 Here's how it looks from the back. The white speckling seems to be a reflection off the Bottom Line thread. It doesn't look like that in person. And, again, the quilting doesn't show very well. 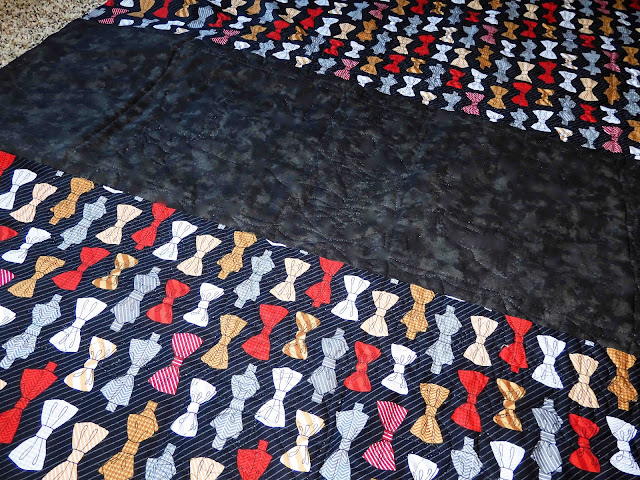 So now I just need to quilt around the outside edge. I was just getting started and setting it up when I quit for the day. I believe I'll be able to work my way around the whole thing without cutting thread, heading back in the other direction to make the curved line across the top and finish it off. (I hope that makes sense.) Then I'll stitch one straight line in the outer border and it'll be ready for binding. I should be able to get that finished today. As I'm looking at this, I realize I missed a spot where the flying goose is. I'll have to fix that on my way back across. 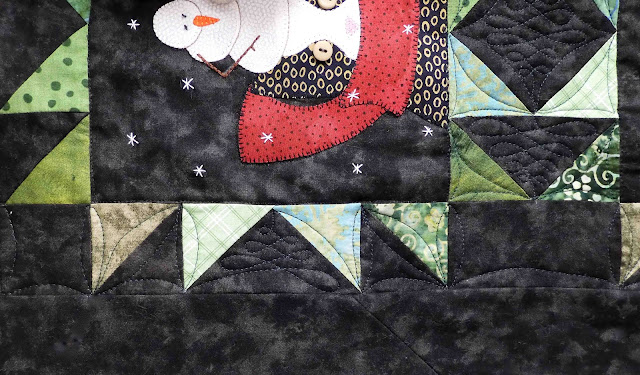 Sadie chose Mike as her snuggle companion this morning. She was all stretched out and snuggled in when I came upstairs to write this post. She seems completely back to normal after her dental work. 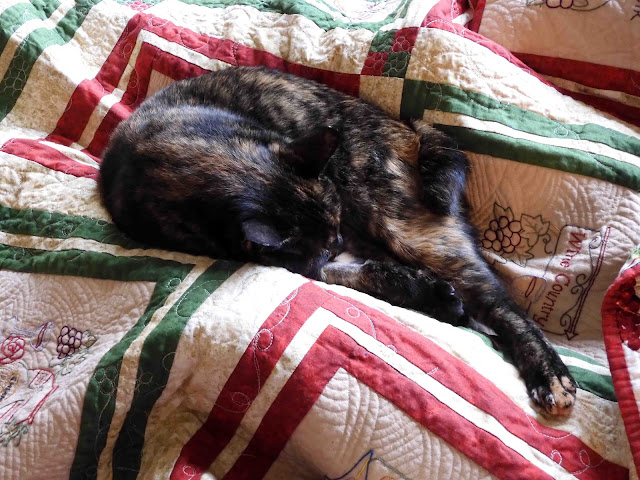 On today's agenda, I'll be making something new with my beets: Red Root Relish. It's made by dicing up the beets and adding them to some shredded red cabbage. Then some spices, and you've got yourself some relish. I haven't made it before, so I hope it's good. Originally, I had in mind to pickle the beets I've harvested, but I already have six jars. It seemed like a good time to try something new. I'll pickle the next batch. That and quilting...oh yes, and maybe some housework...and you have the plan for the day. What do you have planned for your day?

Well I "slate'd a dragon" today--(went grocery shopping)
At our Publix grocery stores here in Florida--they clean off the carts before they are put in the entry way for us to pick out and use--we can't do them ourselves any more--but--I still always have a wipe to clean my off--cause I have seen --like today--some one touch the handles and then change their minds on which one they want to use--and everyone is suppose to have a mask on now--but did run into a woman with 4 kids taking up the entrance to an aisle with no mask on her or any of the kids!!!( I did not harm her--but, I wanted to!!) Grocery shopping has always been a chore for me--and now since March it is even worse--yet it is my only shopping I do now--No now wait--today I did 'fly' into a JoAnn's for a new pair of small sewing scissors as both of my smaller(actually they are middle sized ones) ones I use to cut fabric shapes out with--both went on strike last week and refuse to cut fabric--(that's cause the lady of the house has also used them for paper--opps!!) and oh my goodness--are scissors expensive---cost was $17.99 good thing I had a 40% off coupon--and even with that I think they were expensive!!!
I did get a quilt finished with basting threads for hand quilting before my friend showed up to take me grocery shopping!!!
give kitties a treat from me--
luv, di and stay safe--

Your discovery of some missed quilting stitches on Tuxedo Tales reminded me of an instance back in the dark ages, before I started quilting, when I did a lot of embroidery, specifically cross stitch and some stamped samplers. On one particular stamped sampler, I finished the stitching, had it framed, hung it on the living room where it still resides, and didn’t notice that I had missed some outline stitches around some flowers that were done in satin stitch, until last fall when the living room was painted and I made the discovery when I was rehanging the sampler. I have to add that the room has been painted several times in the decades since this was initially hung! Why I noticed it this time is a mystery...however, since so much time has passed, and even if the time had been shorter, there is no way I am taking it all apart just to “fix” it! Of course, now every time I pass by it my eyes go right to that exact spot!
I have to tell you that seeing pictures of your vegetable garden brings back some really special memories for me...my father always had a large garden every summer, and my mother spent many hours canning vegetables and making strawberry jam. Over the years I have tried my hand at growing vegetables, but we just have too much shade to have any success at it. So thank you for posting about your garden. The pictures always make me smile!!
Glad to hear that Sadie is back to her old self after her dental appointment...and back with Smitty! Give them both a little chin scratch for me!

I haven't tried putting wire into masks yet because I've heard so many people were getting poked with it and didn't like it. Will be interested to hear your verdict after you've tested it out. Re zucchini - have you ever made zucchini lasagna? It's a favourite for us...along with the more usual things like muffins and quick breads.

I think I am done with relishing and pickling! and I am running out of room in the freezer (saving space for the tomatoes)

So here's another ear worm: "He wore a mask, He wore a monster mask" -- sorry, too much sugar this morning, maybe (sugary pastry for breakfast) - but I needed something to counter the Fiddler song (one of my favorite plays/movies). I haven't put any wires in my masks yet. So far, we're doing okay without them.

I have used pipe cleaners for the wire and they stay put and no poking. I hand wash my masks though. I did sweet pickles this morning! Now on to finishing a few blocks of a baby quilt I am making.

I used Pipecleaners in a couple....they work ok however I haven’t washed them yet....don’t know how they will stand up to that.....I had to enlarge my screen to find Sadie’s face ....she is so cute!

Yes, I got the Fiddler reference, but thought Wendy's Monster mask was a good one, too. I did the grocery store run today and luckily didn't encounter any maskless people and fortunately no kids. Here in western NY, people still seem to be heeding the mask rules, but we got started way earlier than other places. I only made one mask which I did put a pipe cleaner in, but I hated the way the mask fit (it was too short to go from my nose to under my chin), so I just use the blue surgical ones my husband ordered online. They work fine for the amount of time I need one and I don't feel like I need to make a fashion statement with my mask. Going to be hot this afternoon, so there may not be any sewing going on today.
Pat

Yummy! Well, today so far, watering the lawns, sorting magazines to store, reading my quilt blogs, putting things away... in other words life. You are always sew much more productive than I am. Keep up the good work, and I am singing along.