There was time to squeeze in another day of sewing yesterday. I went to work sewing together zillions of bonus triangles collected over about three years' time. If you've read my post from yesterday, then you'll remember these: 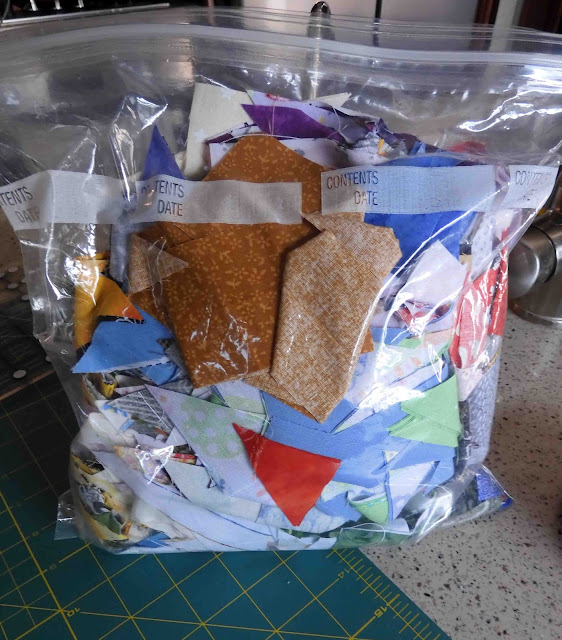 Oh my gosh...there are way more triangles there than I imagined. In my dreams, I thought I'd have those all sewn together in about an hour. After two hours yesterday, I'd barely scratched the surface. It would be generous to say I'm about one-third of the way through the bag.

Of course, no sewing day is complete without help from one's sewing cat. 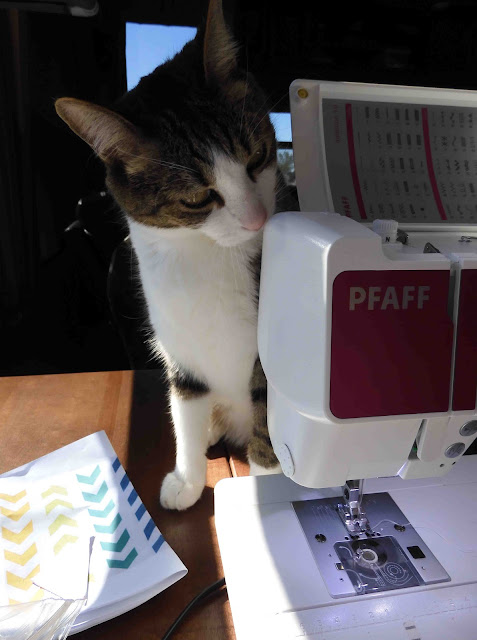 Pfelicity makes an excellent chin scratching post, just in case you were looking for something like that in a new sewing machine. Smitty gives Pfelicity Pfaff a five-star review. 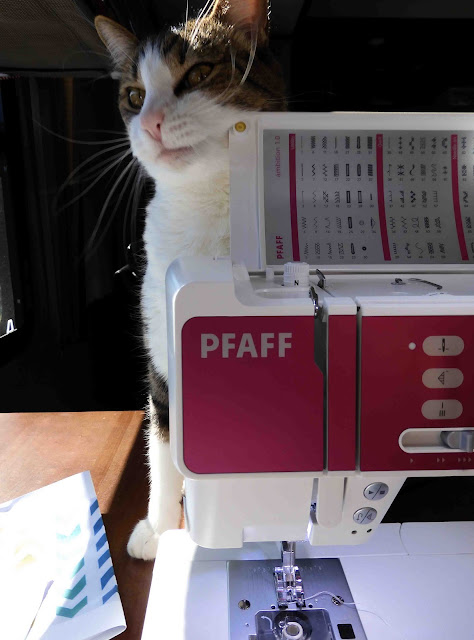 So the triangles are all different colors and sizes. My approach was to start pulling them from the bag and then sewing them into half square triangles. Most of them were paired up with a contrasting color. Some were obviously cut from borders and so they were the same color. Some had no mates at all. But sew them together, I did, and as I went along, I wondered how I was going to turn this into anything that makes any sense. It occurred to me that my first step would be to sort them into sizes. There are still many more to sew, but I did sort yesterday's lot into sizes and then stored them in sandwich bags. 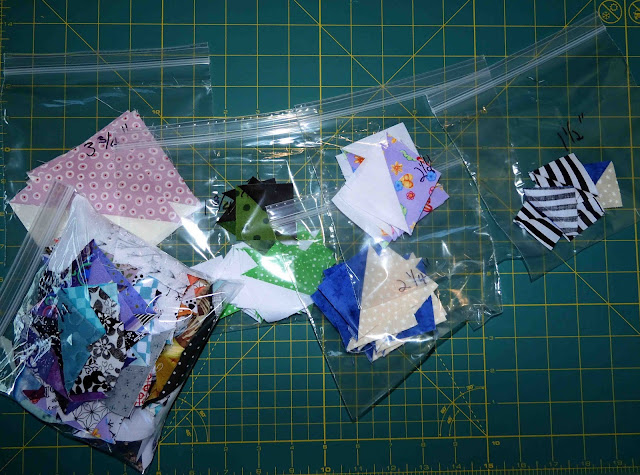 This is one of those wrist-killing projects because they'll all need to be trimmed eventually. For now, I've just trimmed off the little "rabbit ear" corners from the seam allowance. Also, I've given whatever quilt results from this mess a name: Triangulation. And I figure any quilt that has a name is well on its way to being finished! (As if.) So, this is clearly going to be a longer-term project than I first anticipated, but there it is. A finished quilt begins with a single stitch...or in this case, a single half square triangle.

There was also some slow-stitching yesterday. I'm having fun with the inchies, and keeping up with them so far. I'd traced yesterday's wrong, but managed to cover my tracks with the assigned lazy daisy stitches and French knots. No one will be the wiser, and you won't tell, will you? 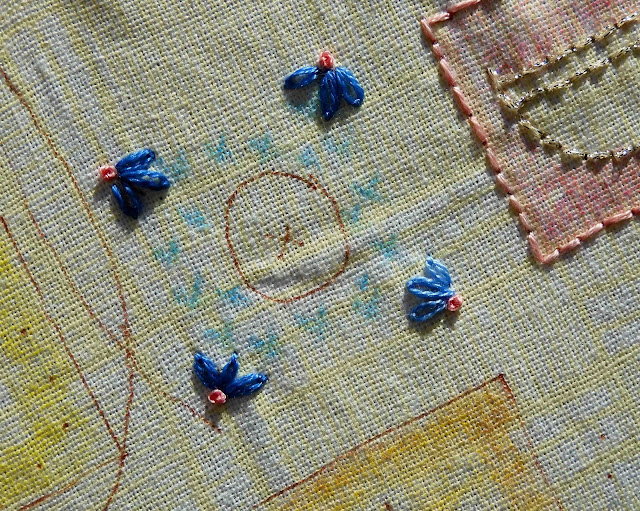 The center was left open on this one for a button to be sewn on later.

Okay, and in the "What-did-we-order-from-Amazon-now?" category is this seed feeder for the wild birds. It's now suctioned to the window a couple of feet away from the hummingbird feeder. So far, it hasn't attracted any birds, but my fingers are crossed. 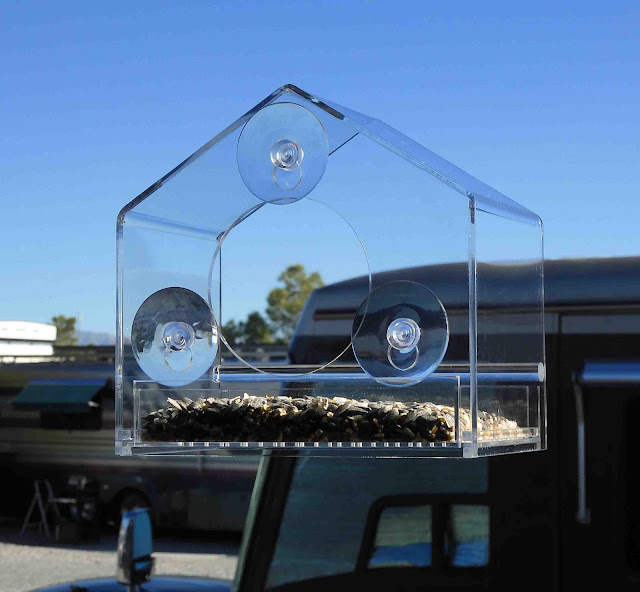 Also this below. Now what's going on here? See that cat? And see that cat toy? And at the top of the image is the couch on the back wall of the RV. There was an inch gap where skittering toys went to die. Only, they didn't die. They lay there calling to the cats. "Try to get me now, Mr. Pussycat!" And try they did. In fact, they tried so hard they were ripping up the upholstery on the couch. 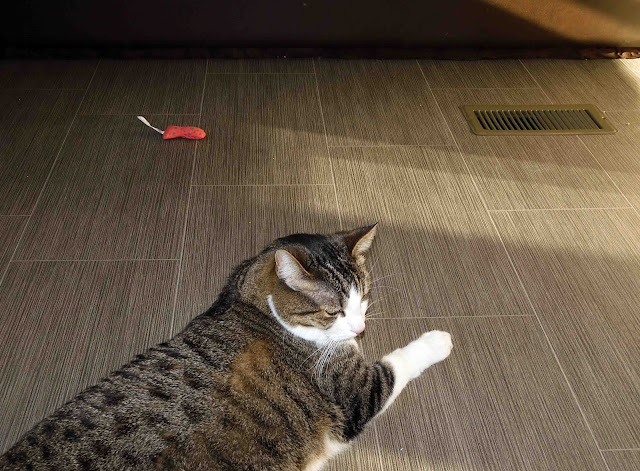 We were spending half our lives lying on the floor with a flashlight and a broomstick handle, fishing out toys to save the couch. So we got the bright idea to order a couple of door draft stoppers, and we used the same broomstick handle to shove them under the couch, effectively blocking escaping toys from entering. 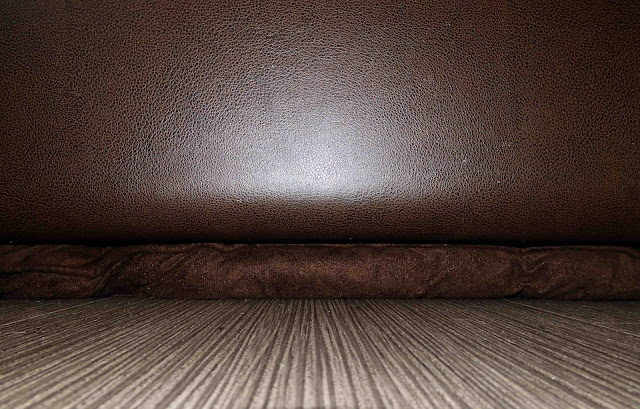 It's working beautifully. There's more than one way to skin a cat...although no cats were skinned in this process. In fact, we've saved any cats from being skinned, because, believe me...we were considering our options in that regard.

In the "What's cooking?" category, I wanted to share a new recipe I tried. When we're traveling, I'm always on the lookout for recipes that are easy to make, don't make a big mess, and use up items in the refrigerator. On this trip, I brought a lot of food purchased before we left home, and I'm still making my way through it. There were several packages of gourmet cheeses, and I didn't want those to go to waste. In particular, I had a hunk of Gruyere (which I happen to love), and I was looking for a way to use the last of that. Enter, these French Onion Grilled Cheese sandwiches. I'm borrowing the picture from the NYTimes to show you how delicious they looked. 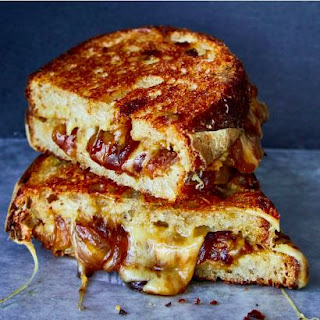 The recipe will make two sandwiches. I used one whole yellow onion, and one half onion retrieved from the vegetable bin. They were first sliced vertically. Slicing vertically makes for a sweeter onion flavor. It took about 20 minutes to saute the onions to a nice golden brown. Then...and this is the genius of the recipe...the onions were mixed with the grated cheese so that the cheese melted before it was added to the bread. Then, the sandwiches were grilled in the same skillet I used for the onion. I especially liked their idea of putting the butter in the skillet, rather than smearing it on the bread. If you're a fan of French onion soup, you will almost certainly enjoy these sandwiches. Also, I imagine you could use a different cheese if Gruyere is not your thing.

So today should be another day like yesterday. I'll get back at those triangles, and I'll get in some slow-stitching. Also, we've promised ourselves we'll get out for a walk today. The weather was so cold on the first two days after our arrival that we pretty much hunkered down under quilts. The past several days have been lovely, and the weather is looking good for Erik and Mae's visit. They'll arrive tomorrow. I want to make a salad for our cookout tomorrow. Otherwise it's going to be a mostly-sewing day.

I made your overnight lasagna for guest coming today --this is a new standby recipe for me (remember my story about lasagna soup;000?A new husband's fave!! And now this cheese/onion sandwich one--oh yes this will be for us tomorrow...it looks so yummy--thanks so much for all these lovely recipes pour deux!!
I also drew one block of the inchies wrong--out of Alpha order!! Yikes--what was I thinking? anyway..I need to begin working on these...
hugs, Julierose

Great idea for under the couch. We should try that for under the entertainment center, there are always dog toys and/or matchbox cars under there. Your inchies are coming along beautifully. I hear your pain about all those triangle squares, I just pieced 144 tiny ones for my monthly mini, and there are tons more in several swiffer refill boxes. Have a great time with Erik and Mae.

I, too, am a Gruyere lover. I would totally make that sandwich if onions liked me, but, alas, they do not. Years ago I saw a sandwich recipe that used Gruyere & sliced pears in a grilled sammy. I never have made one, but it sounded delicious to me. It did inspire me to add some apricot jam (or whatever was on hand) to make a grilled cheese and they all worked out wonderfully.
I just know you're going to have a marvelous time with kids - enjoy the next week with them!

I have learned to do up my triangles after each project and then store them by size. Then when I need them, they are all done for me. It's a never ending supply as I always keep my cutoffs.

Enjoy Red Rock Canyon. Several years ago we came over for our daughter's wedding in Vegas and the best bit for us was the trip to the Canyon. Loved it and if we go back to Vegas....we will just HAVE to go Red Rock.

I related very well to DOG toys going under furniture to be fished out with a yard stick. My favorite chair has the underlining in tatters. I tried the stuff the bottom of the furniture technique. Worked on the couch but my chair is too high for even a rolled rug as a deterrent. Those triangles look like a big ongoing job. The sandwich looks great. Think we'll have Monte Cristos today.
xx, Carol

I recognize that cat toy :-) brilliant idea, putting draft stoppers there! I need to find all the toys that have skittered under our furniture, which means I really should clean. But not today. We are having a snowstorm, and I'm going to sew. One of our latest cheese loves is a truffle gouda. Oh my goodness. So incredibly good. Or should I say, goud-ahhh!

I found a print that I decided to use as a mini panel center in a little quilt, put some borders on it, then it went into time out till I got inspired for more. I've decided to put some saved hst's from cut offs at opposite corners of the next round before the final border. That would be one use for those.