Last of the Zoo Animals

I still have some more zoo animals to show you, but this will be the last of them. We were as impressed by the physical structure of the zoo as we were by the animal exhibits. I'll add that we didn't walk past the larger African animals (think elephants, giraffes, and other hooved critters) until we were leaving the park. I didn't take any pictures of them. I was pictured out by that time, and the other stuff was more unfamiliar and interesting to these zoo-goers.

Let's just start with this Desert Dome. What a cool structure...but warm inside. It was a desert with desert critters who appreciated the warmth of their environment. 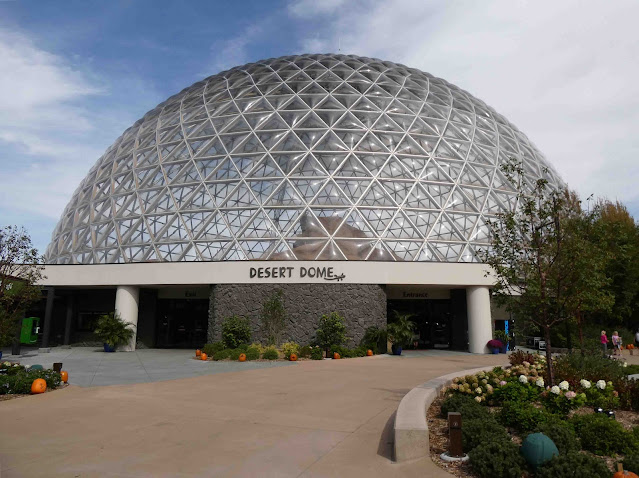 I can only identify a few of the animals. These below are mongoose. 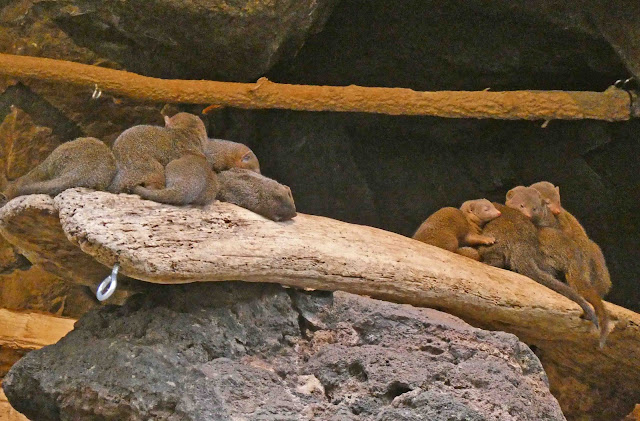 This is a diamond-back rattler. It's too bad he's such a hostile critter because his skin is so beautiful. 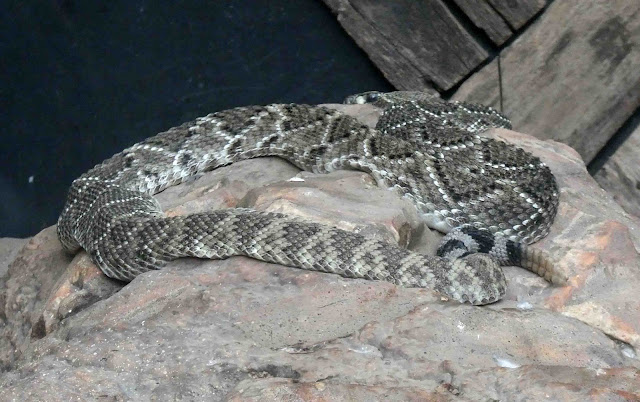 What we really came to see at the zoo was the Lied Jungle (pronounced "leed") exhibit. Walking through the opening into the exhibit, it looked like this. There, running vertically to the left of center, was a large banyan tree trunk that appeared to support the whole structure. 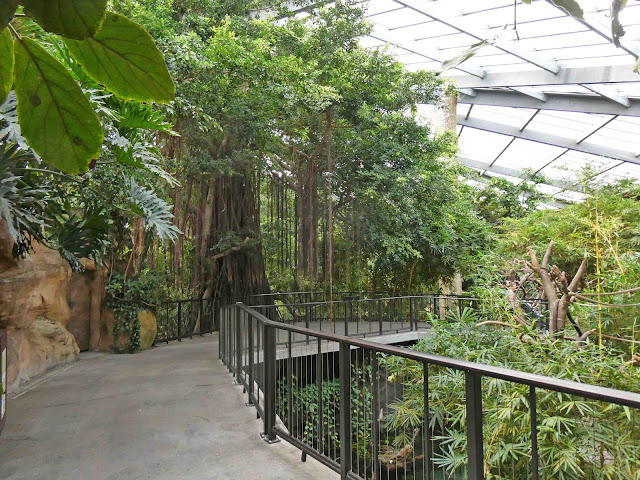 Inside, we saw some precious small primates. They were a little shy and sleepy, and it was hard to get a good picture of their faces. 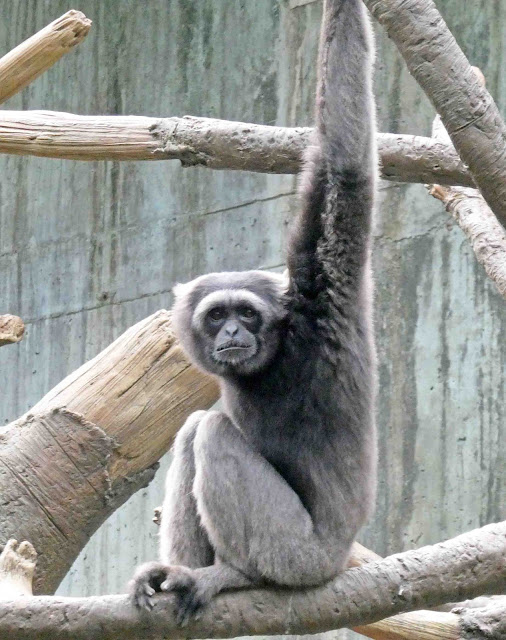 These are "flying foxes." I really should have taken a video here because there was constant motion in this cluster. 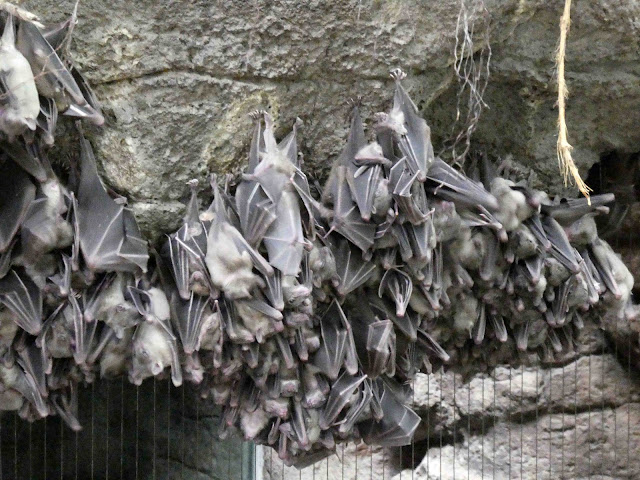 These are Malayan tapirs. They're a very large animal, about the size of a fully grown pig. 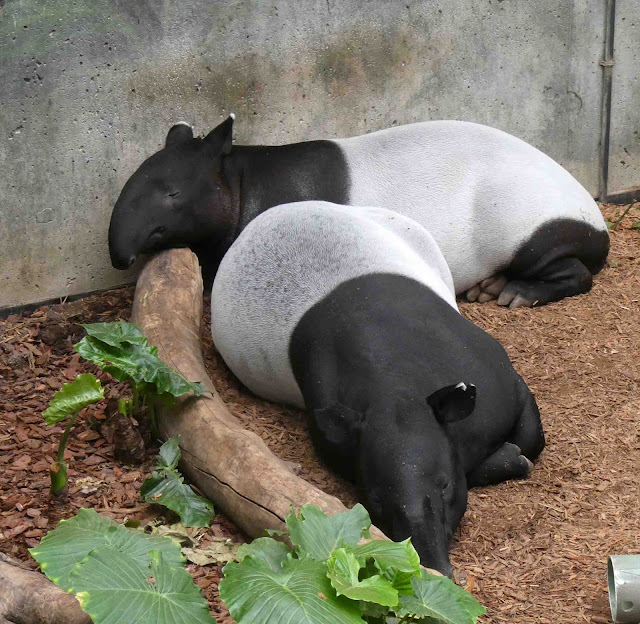 These next guy is a Fransois' Langur. 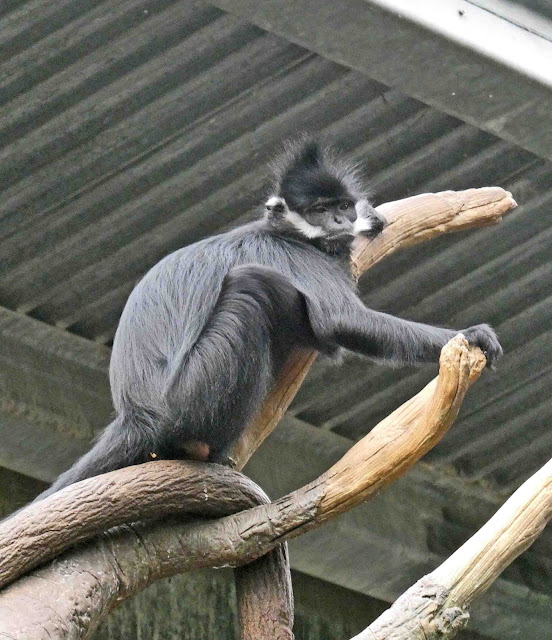 And this guy was so funny. He kept ducking down behind the lower part of the image so that we couldn't see him, and then he'd pop up like this, as if playing peek-a-boo. 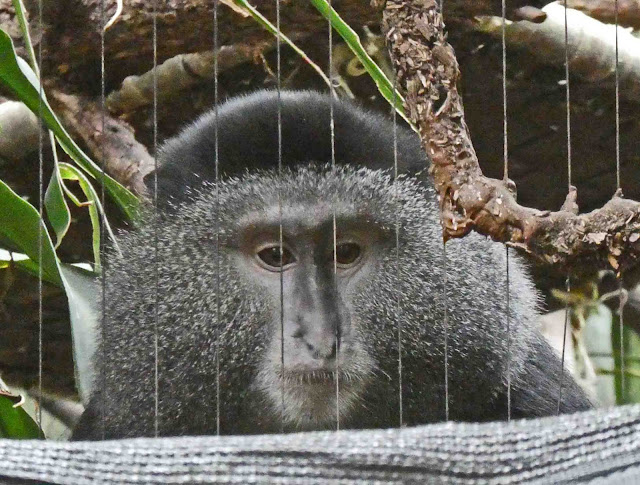 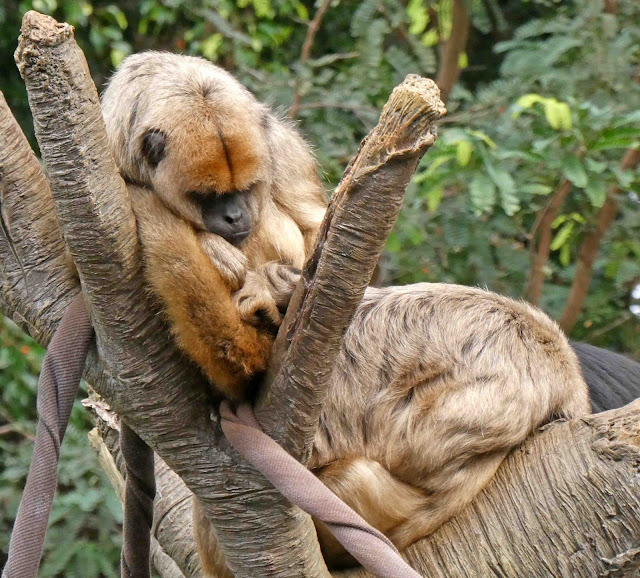 These are black spider monkeys. We enjoyed their playful activity. 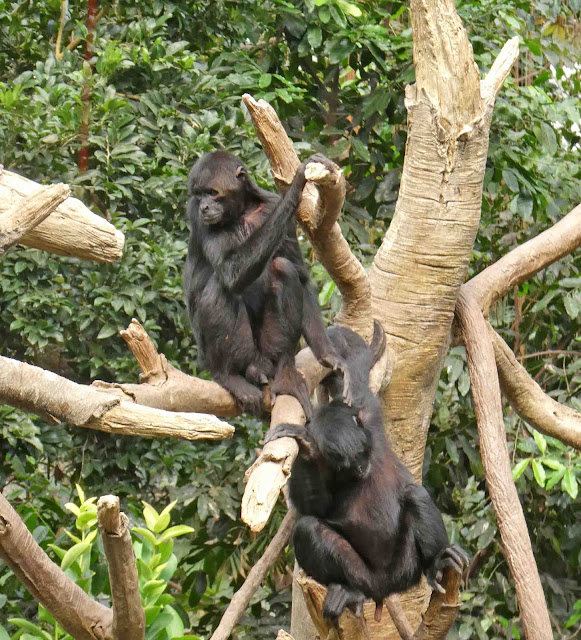 This next one is a squirrel monkey. He was smaller than the rest. 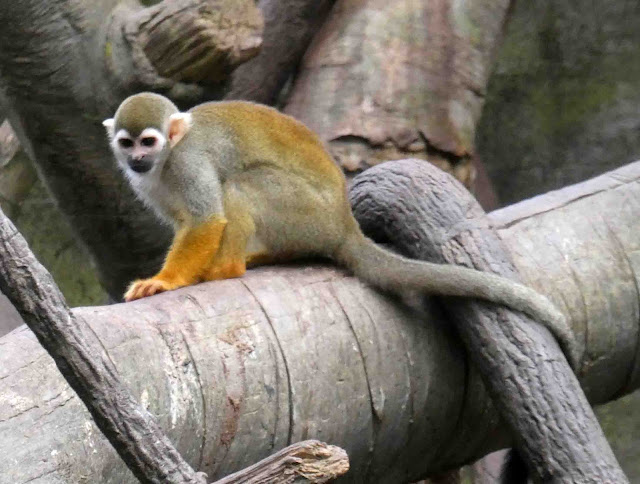 And look at the tails on these! They were long and lovely, like a horse's tail. 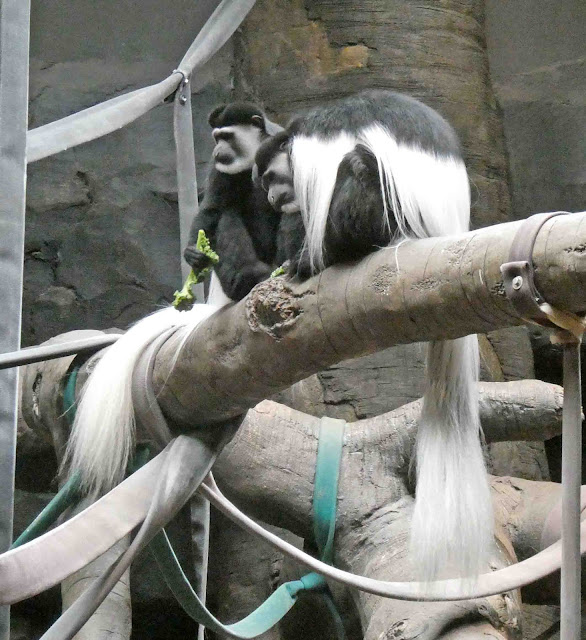 This gorilla sat still as if in quiet contemplation. 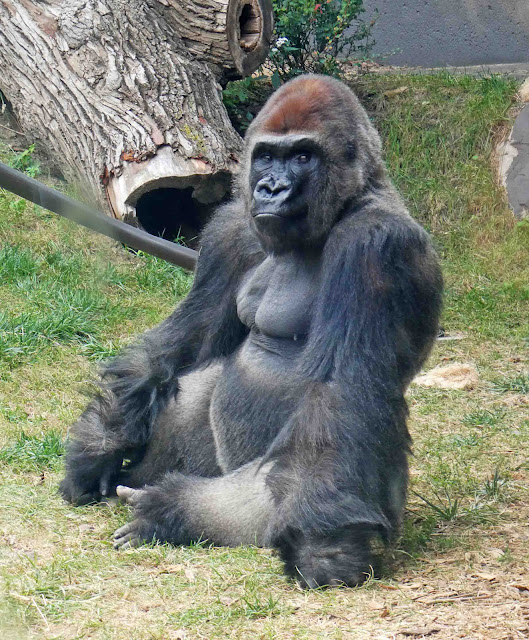 This is a red macaw. 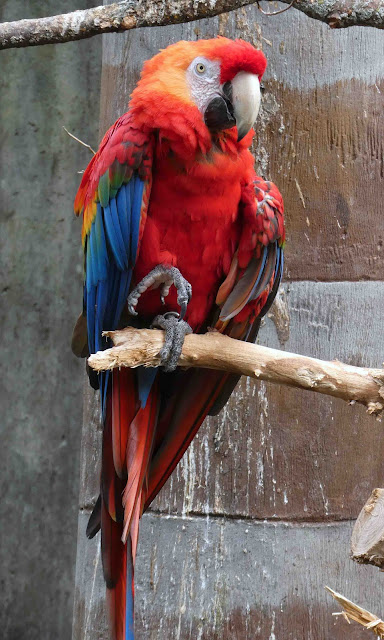 To his right was a blue and yellow macaw. 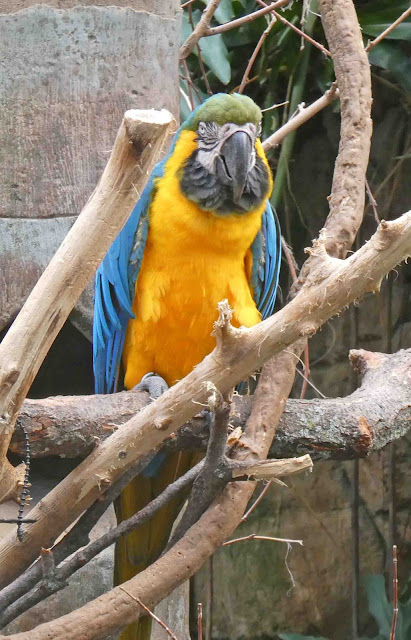 And, oh my gosh...what a funny bird! I was wishing he'd raise his head for a better look, but he was too intent on pecking at his legs. This is a West African crowned crane. 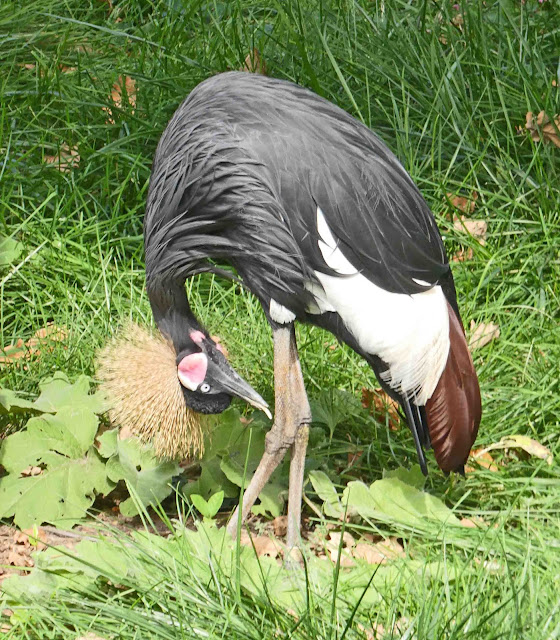 We read every sign trying to identify the white birds here. I believe they are a kind of stork, but we never saw a sign to tell us. 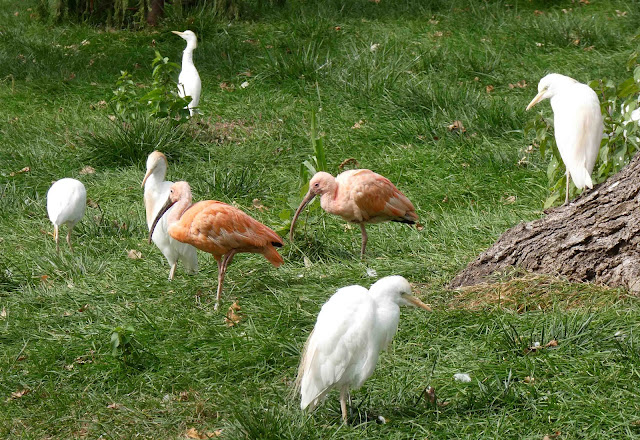 This is a straw-necked ibis. 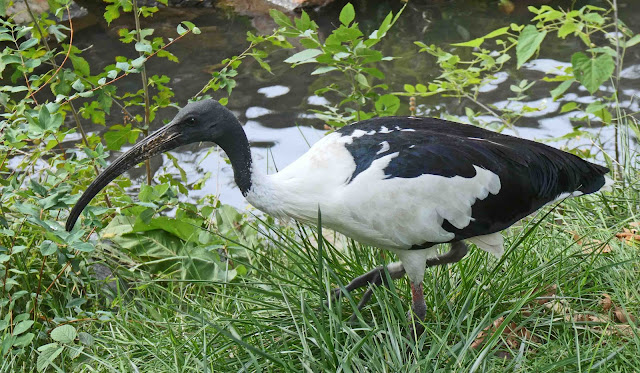 And this is a meerkat. He seemed sad and lonely, and appeared to be alone in his enclosure. I have a feeling his friends were probably out of sight and sleeping. That was the case with virtually all the large cats. Their exhibits were all empty. 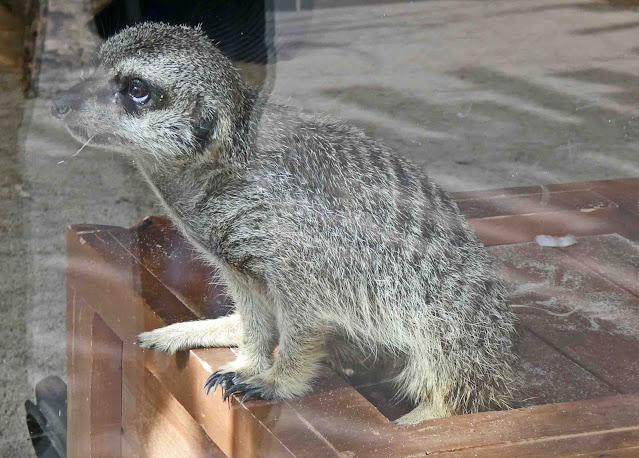 This is a little klipspringer. He's about the size of a small goat. We saw him in two different exhibits. 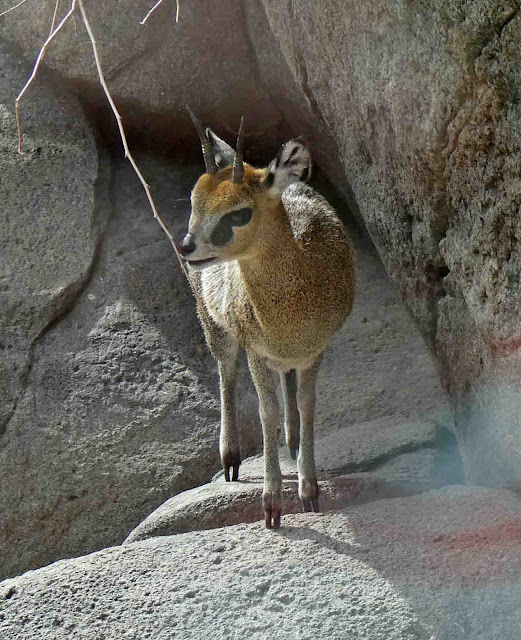 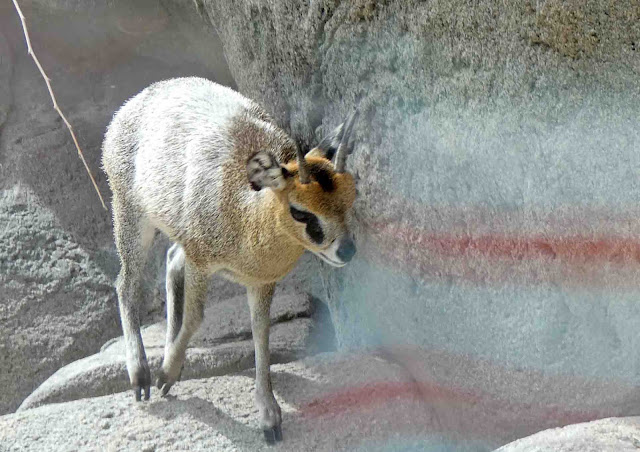 And I'll finish out the zoo photos with one more video of the jellyfish. They are absolutely mesmerizing. (If you can't see the video, click on the title of this post to be taken to the actual blog. You'll be able to see it there.)
Okay, so I still need to tell you about yesterday's quilt shop, but that will need to wait for later in the day today or tomorrow. Right now, I'm going to get going on my slow-stitching. If I'm going to finish it today, I'd better get stitching.
Posted by Barbara at 7:22 AM

I love to go to the zoo. But not on Sunday. I don't like to see the people making fun of the animals, when it should be the other way around. ~ Ernest Hemingway

Love the dainty little klipspringers, so pretty. Certainly lots to see at the zoo. Such an interesting day for you both.

Looks like a fun time at the zoo. You captured some great shots!

I love seeing the monkeys in the zoo but have to admit I've never seen any with tails like those! Macaws are such impressive birds and it's hard to belive such spectacular colours can exist all together. Lots of quilt inspiration there!