It was a relatively short day of driving yesterday. We hated to have to move Sadie who was enjoying a morning nap on her window hammock. But move her we did. We were just about 20 miles from the state line, and so we passed into Illinois just shortly after getting on the road. 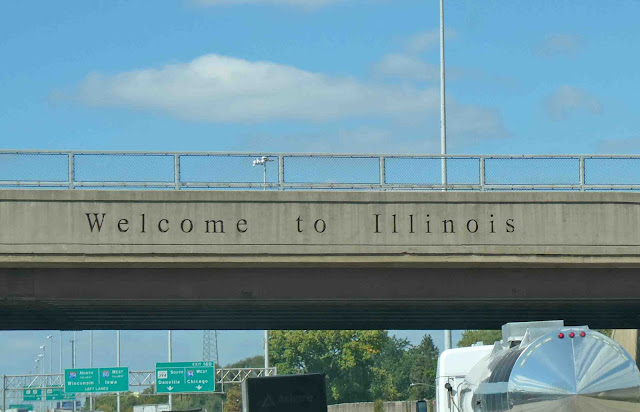 Until the final few miles of our journey, we were traveling the interstates, and so there wasn’t a lot to see beyond zillions of trucks. We were near Chicago here, and there was lots of industry in the area, meaning lots of trucks too.
Of interest was the span across the Thornton Quarry. I wasn’t able to photograph it as we drove over, but I found this image in the public domain: 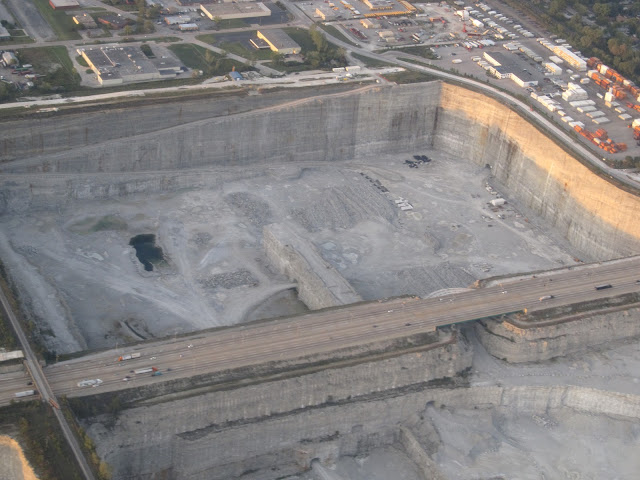 (Image credit: https://www.flickr.com/photos/kenlund/7993014132/)
You can see where the interstate crosses over the deep pit running diagonally through the middle of the image above. Well. Don't you know something like that required that I consult with my friend, The Google. Wikipedia tells us that:

Thornton Quarry is one of the largest aggregate quarries in the world, located in Thornton, Illinois just south of Chicago. The quarry is 1.5 miles (2.5 km) long, 0.5 miles (1 km) wide, and 450 feet (137.16 m) deep at its deepest point. Gallagher Asphalt Corporation has been operating on the grounds of the quarry since 1928. A dryland dike carries Interstate 80/Interstate 294/Tri-State Tollway over the quarry.

As part of the Chicago Deep Tunnel project, both Thornton Quarry and McCook Quarry will serve as reservoirs to reduce the backflow of storm water and sewage from Chicago area rivers into Lake Michigan. It is estimated that the reservoir will help protect 500,000 people who live in the surrounding 14 suburbs it serves, and will save the city around $40 million worth of damages each year.
The quarry contains Silurian reefs which formed when the Michigan Basin was covered in sea water more than 400 million years ago.

Have I said lately how much I 💗 the internet?

So, there wasn't a lot to see at the beginning of the trip, but as we moved into the more rural areas, we started seeing more barns and fields of corn. The barns tended to be way far off the road, and so it was hard to get very good pictures of them. 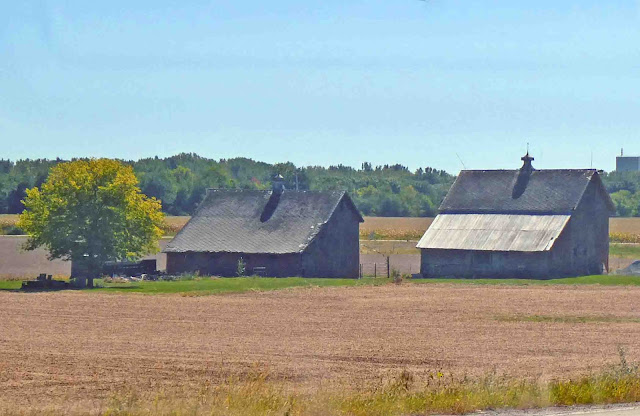 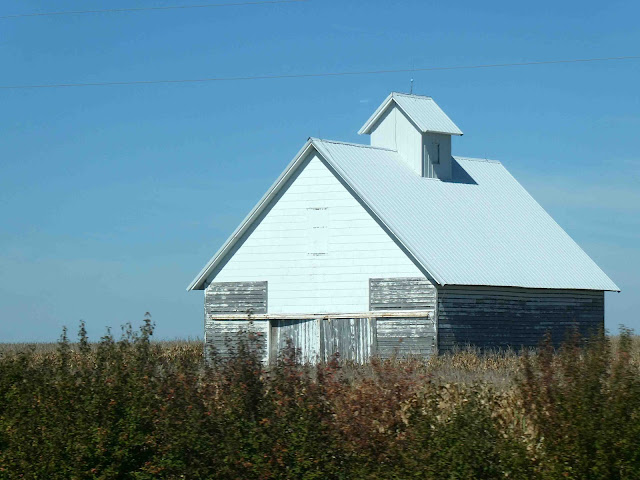 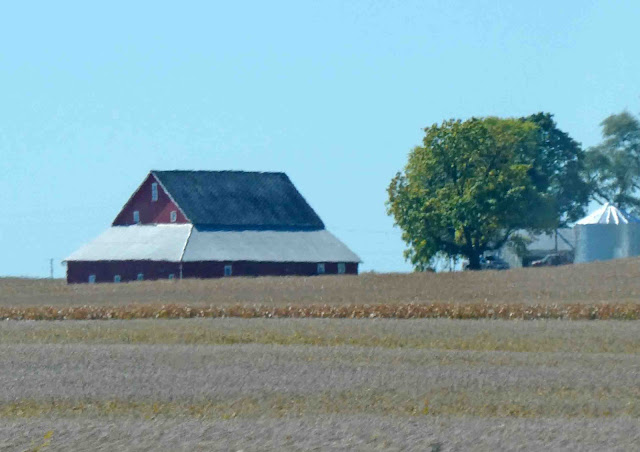 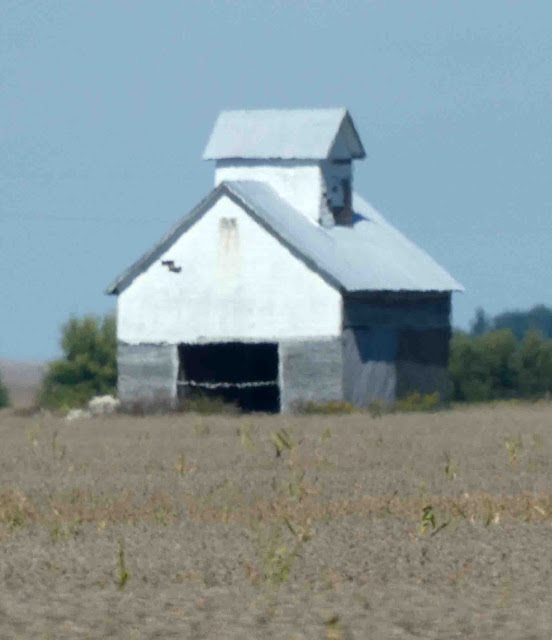 At the very end of our journey, we left the interstate and crossed over the Illinois River. 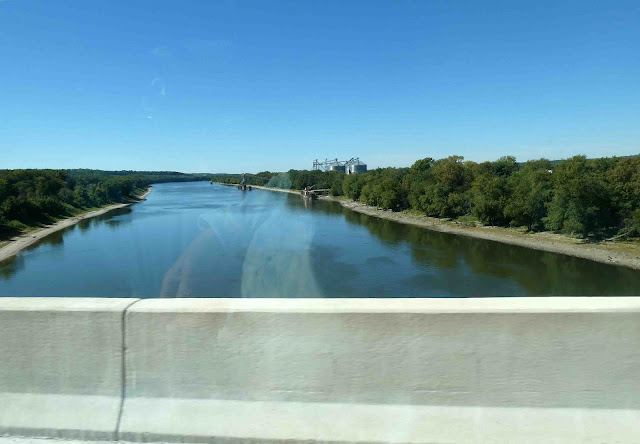 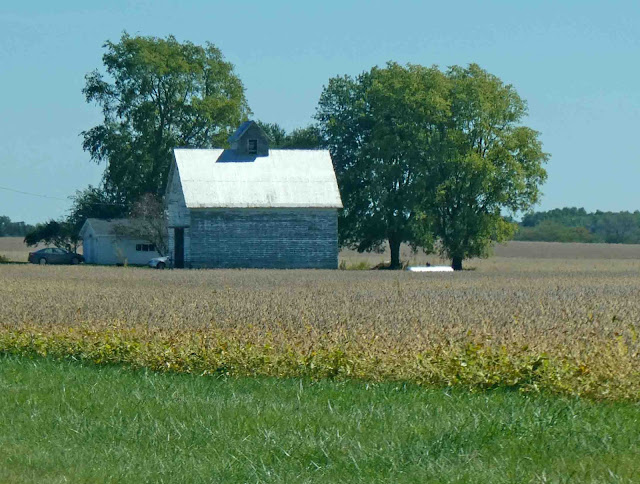 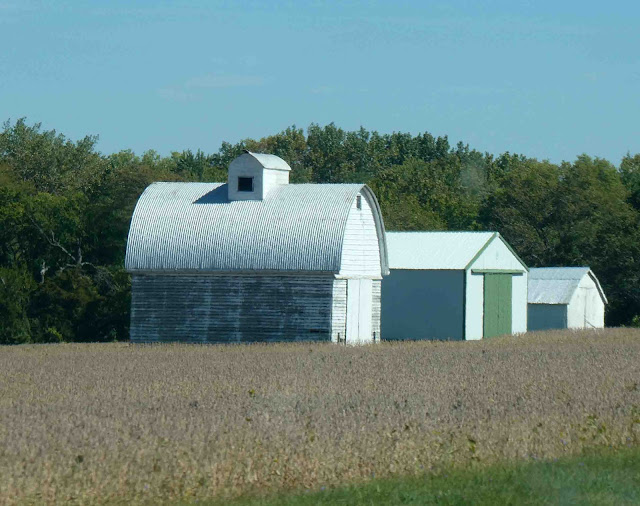 before reaching our final destination of Starved Rock State Park. 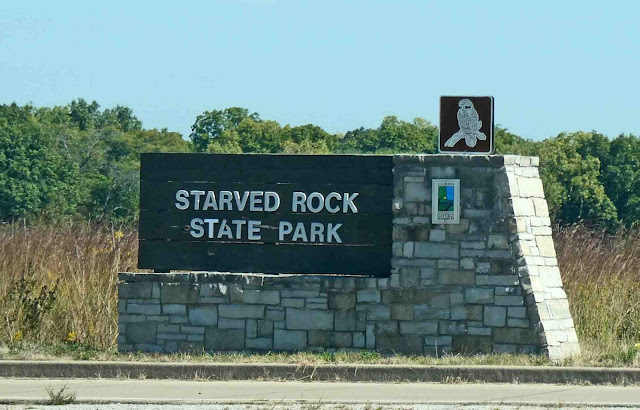 The signage here could use a little work. There was nothing indicating where the campground was, and so when we came to this sign, we turned in. We never saw a sign for the campground, but we did suck in our breath when we came to a sign indicating a low clearance bridge ahead. 13'1" was the limit, and we are at 13'5". Yikes! And oops. We turned around and came back out the way we came in. When we reached the t-intersection of the main road, we could see the sign indicating the campground directly across from us. No way anyone could see that sign without first doing exactly what we did. As it turns out, the campground was just down the road. And it's a nice campground, with lots of space between rigs. Mike and Smitty wasted no time getting our for a walk. 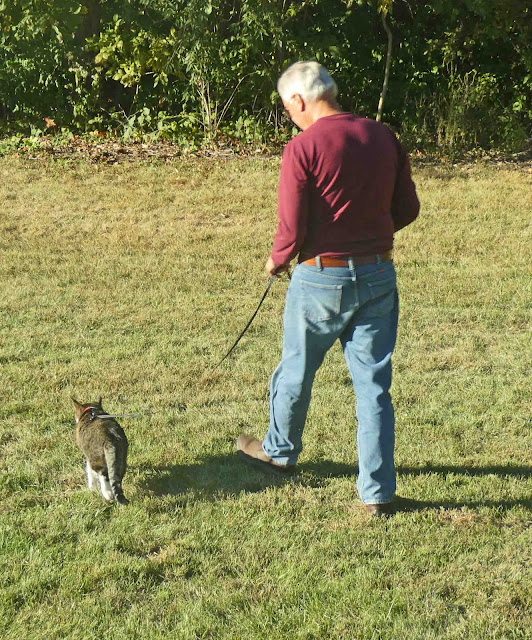 Smitty was champing at the bit to get some of that Illinois grass...even though he was concerned about "Illinois." Would it make him "ill" and "annoyed"? We couldn't be sure without giving it a try. 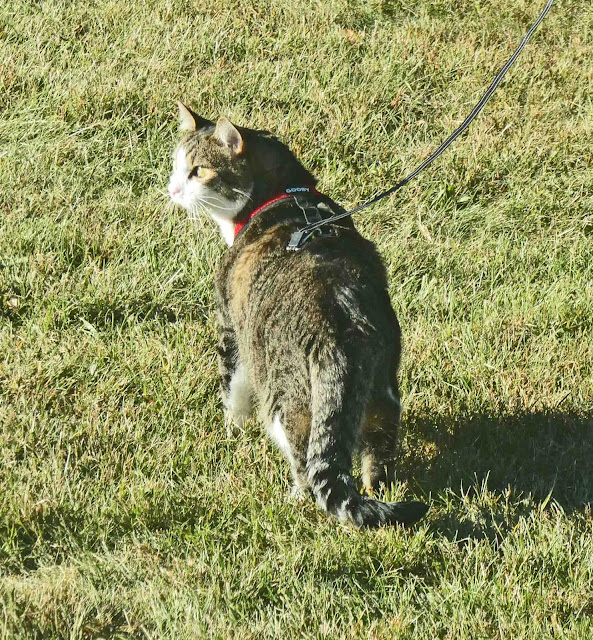 Sadie enjoyed Smitty's walk from the sunny comfort of her catio. 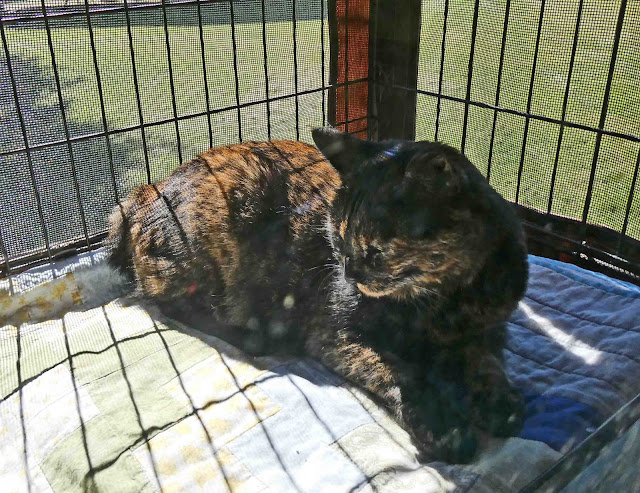 There was just a little left to do on Block 5 of my project, and so I finished that off. We're in an electric-only site, which means I don't have enough water to run it through the wash yet. The picture below still includes the Sticky-Fabri-Solvy. I'll show you another picture when it's rinsed and pressed. 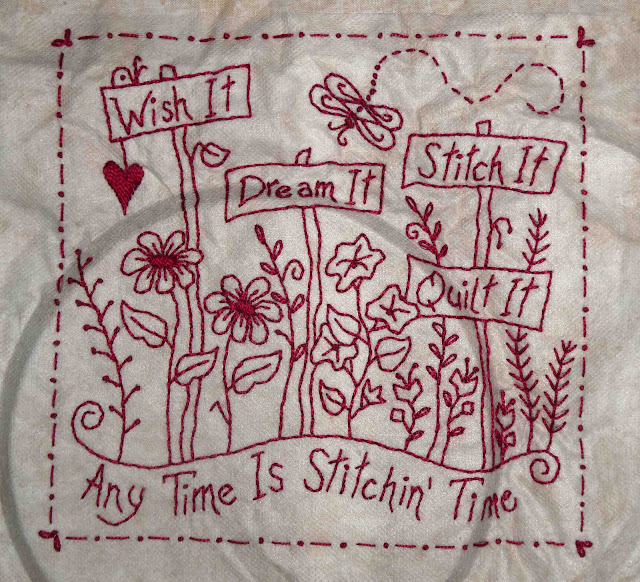 With that finished, it was time to make up the next one. I thought I'd taken a picture before I hooped it up, but apparently not. You'll have to wait until it's stitched to see the whole thing. 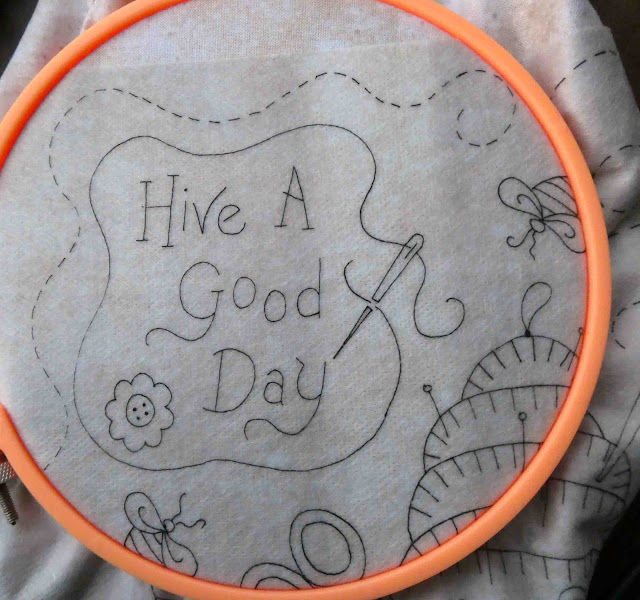 And with October 1st nearly upon us, I'm going to make this my goal for October's 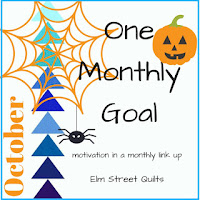 I'll link up there when the party starts tomorrow. We'll be back home again for the finishing party.
There was just one more vitally important task to complete for the day. We added Illinois to the map on the side of the RV. 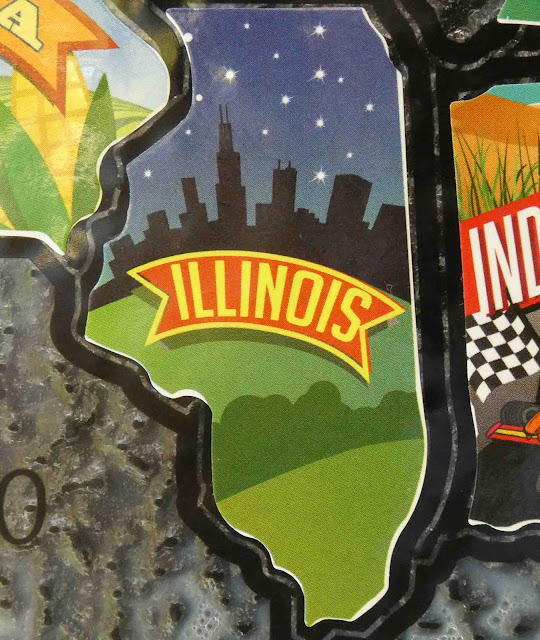 Ta-Da! It's the last new state we'll be adding this trip. That's 45 states down, 5 to go.
Okay, so I'm dealing with very slow internet again. I managed to get this post up and running, but I don't know if I'll be able to tomorrow. We're doing some sight-seeing here at Starved Rock State Park today, and that usually means lots of pictures. Our next stop is an actual RV park, and so we should have better internet there. And all of that to say that I'll post tomorrow if I can, and if not...we'll take another trip in the time traveling machine.
And, Florida...I'm so, so sorry for what you're going through right now. We were sad to read about the bridge out to Sanibel Island. It was one of the places we visited on our USA Perimeter tour. One of the pictures I took there went into my One Word Wonders Sketchbook project...this one, labeled "Plentiful": 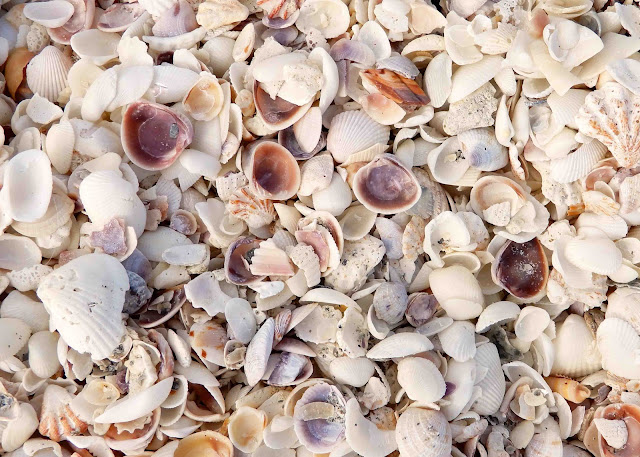 You can read the post I wrote about Sanibel Island from December, 2017, right here. If you're in one of the affected areas, Sanibel Island's woes may be the least of your worries. Best wishes for an easy clean up for you, but I'm afraid you're in for a long slog, and you have my sympathy.
As for my South Carolina friends, please stay safe.
Posted by Barbara at 5:59 AM

Illinois surpasses every other spot of equal extent upon the face of the globe in fertility of soil and in the proportionable amount of the same which is sufficiently level for actual cultivation. ~ Abraham Lincoln

You are about 30 miles south of me right now. Good black dirt and lots of cornfields and you know you are in Illinois.

Glad you made it through the truck traffic okay, and enjoyed seeing all the barns along the way, too! We were stunned seeing the damage to Sanibel, as well as the rest of the areas affected. So sad about the loss of lives, especially.

Bad signage can certainly lead to frustration, and possibly an accident. It's not easy when towing to be able to turn around again, unexpectedly. I'll be interested to find out the tale behind the name Starved Rock?

More barns - yay! I would have hated all that truck traffic you went through so I'm sure you were relieved to put that area behind you.
With the two massive storms, Fiona and Ian, there is much to be concerned about for sure. Hopefully that's the last of them for awhile.

I crossed over the Thornton Quarry a gazillion times when traveling to and from work when I lived in Calumet City and then Lansing, Illinois over 18 years ago. My job moved to the Aurora Airport in Sugar Grove, IL and I've been in this area now for 18 years now.

Anxiously waiting for your experience as well as pictures from Starved Rock. My family used to go there when I was just a young kid, what now seems like a hundred years ago.

Hope you have wonderful weather for your hiking. I guess if you don't, you'll finish your stitching sooner?

I've been traveling that road over (through?) the Thornton Quarry my entire life. When we were kids, we'd always greet it by saying, "Hello, Moon!", then when we got to the opposite side, "Goodbye, Moon!" I still say that, actually, even though we can't actually see the surface anymore.
Barbara, what do you use to transfer stitching designs to fabric? A Micron pen, or a fine-point Sharpie?