Every Blooming Thing in August

When I came upstairs to write this post, Sadie was champing at the bit to get outside. We always make them wait until about 10:00 a.m. It gives the "bad dogs" time to clear out of the area. This has been explained to her many times, but she persists. 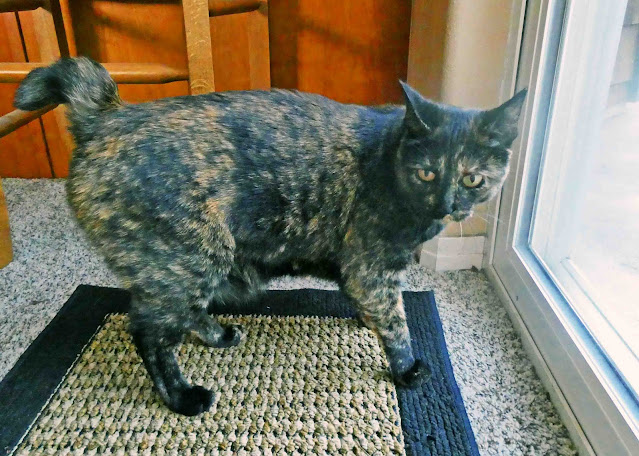 Hey...don't walk away from me! You forgot to open the door! 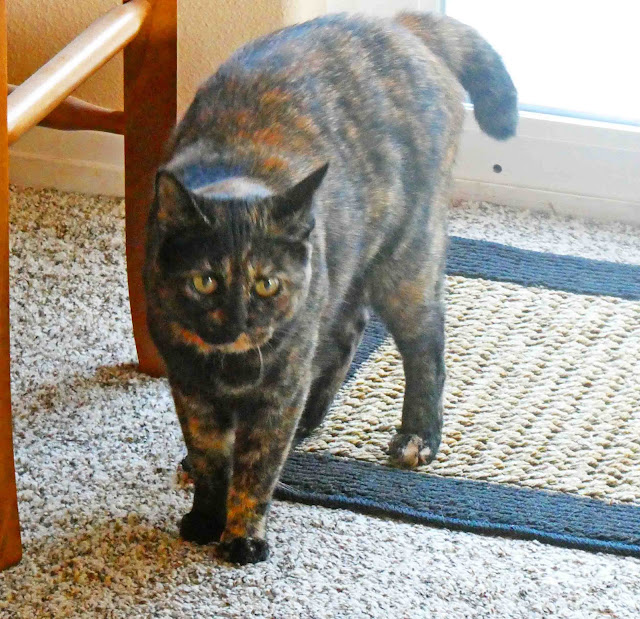 Smitty takes it in stride. He lets Sadie do the heavy lifting. Besides, going out later gives him a chance for his morning nap. 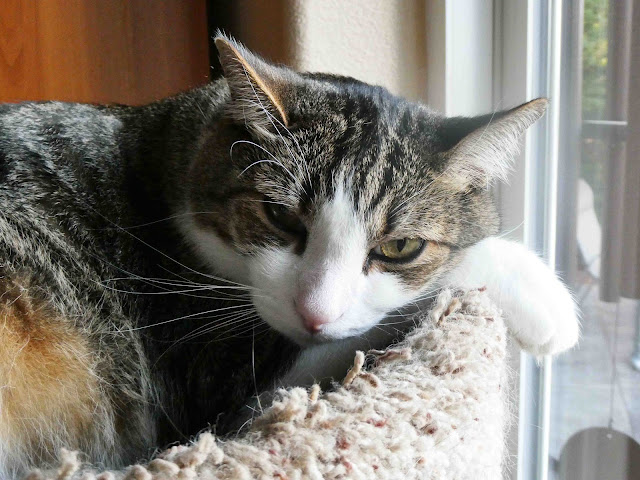 So there isn't anything of note to report from yesterday. Mike and I towed the fifth wheel into town to do some measuring. I can't remember if I've mentioned this already, but he noticed an unusual wear pattern on one of the tires. He worried there was a problem with the suspension. As it turns out, it's just a bolt that sheared off and needs to be replaced. We were measuring the distance from the hitch to the tires, and he was determining if the axels were parallel. They are, which makes this a small job, rather than something more involved. Phew! All this last-minute nail-biting has me on edge.
As we were sitting in the living room yesterday evening, I happened to notice these pine cones high overhead, covered in sap and glistening in the sun. 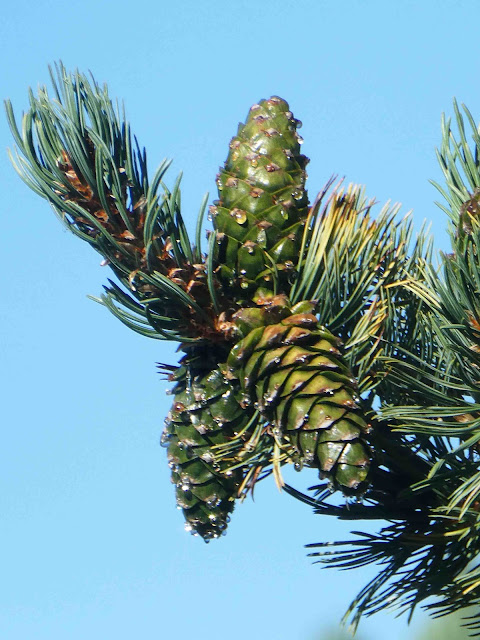 It motivated me to take a walk around the house. The squirrels left this potted dahlia alone long enough that it was able to bloom. They've taken to biting off the buds practically the instant they appear. 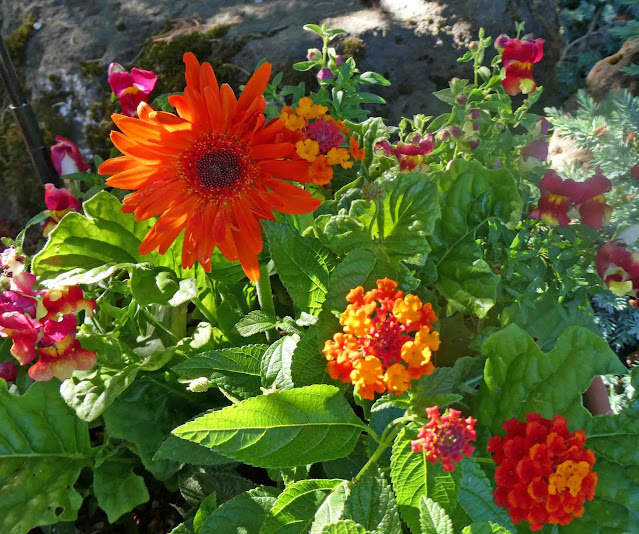 This next pot, in particular, is a favorite target since it's right next to their little hidey hole. 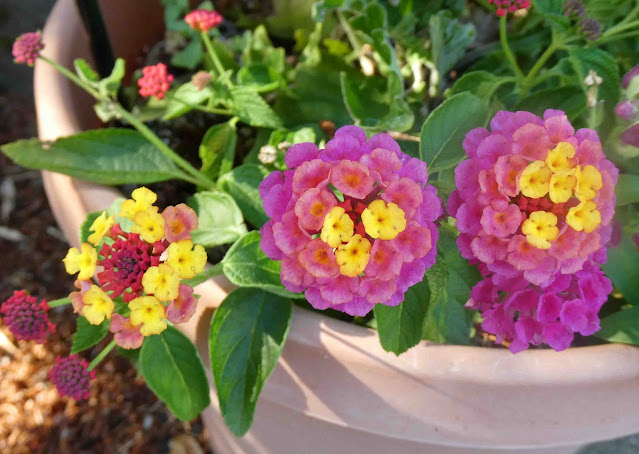 The clematis is nearly finished for the year. It was a good performer this season, despite the snow that fell in April, just as its buds were forming. 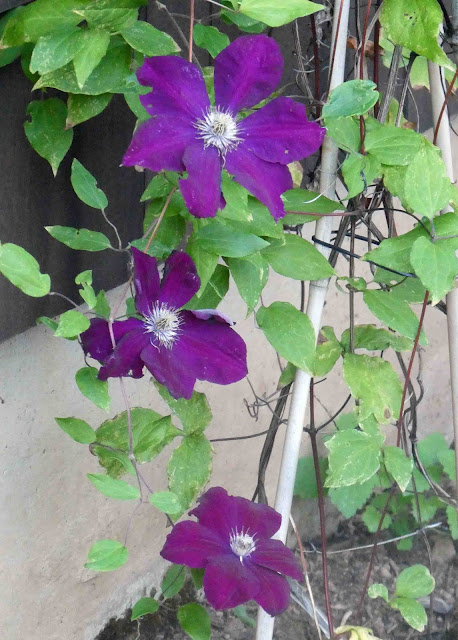 Is this the bluest hydrangea you've ever seen? 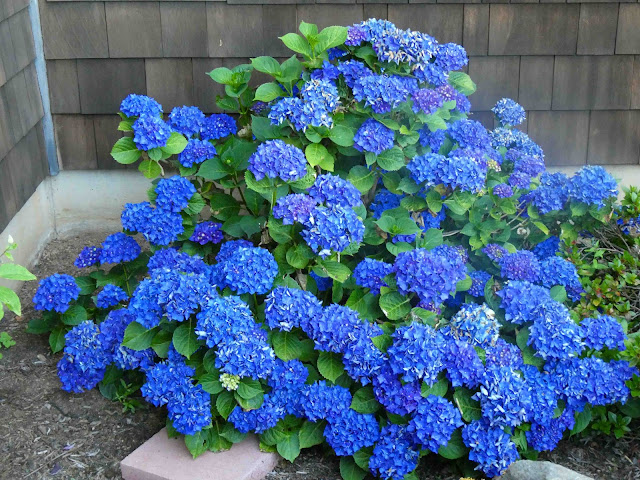 It's looking a little bedraggled from the heat. It has really put on a show this year though...bluer than blue. 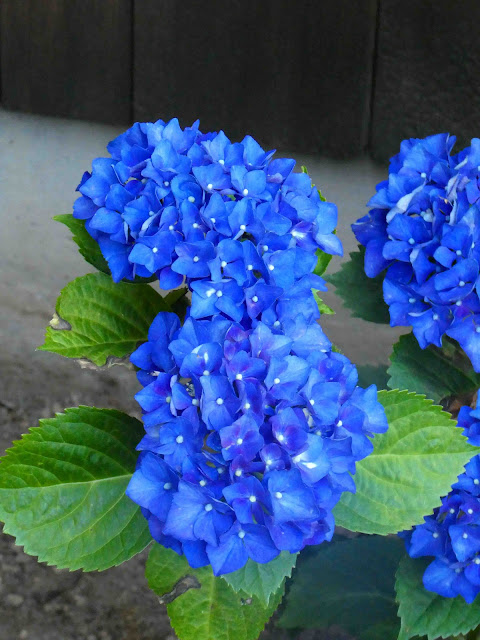 I noticed more color in the bee garden, and so I wandered through there taking pictures of anything I saw. 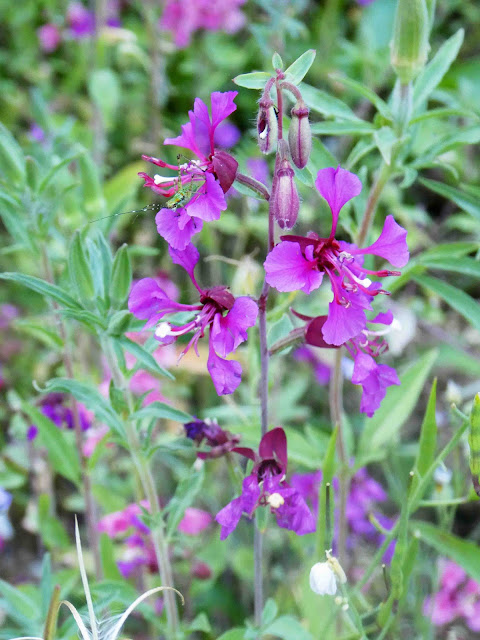 These are called "Chinese Houses." 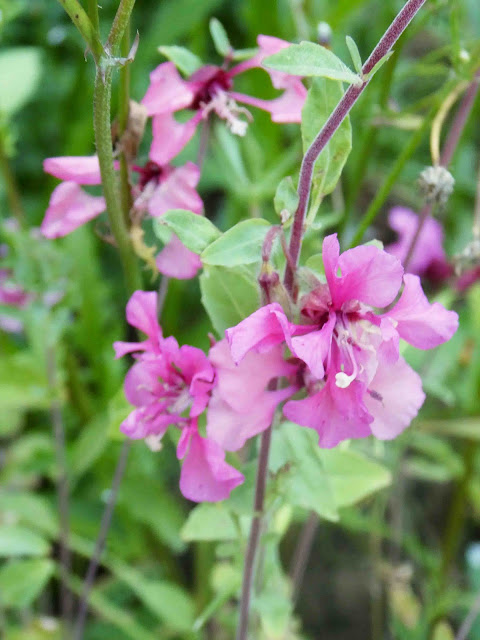 The next one is "Godetia." 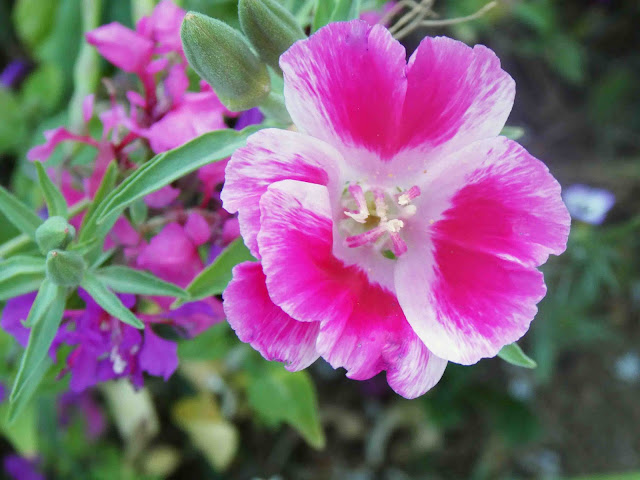 I was happy to see this Black-eyed Susan. I don't remember these making an appearance last year. 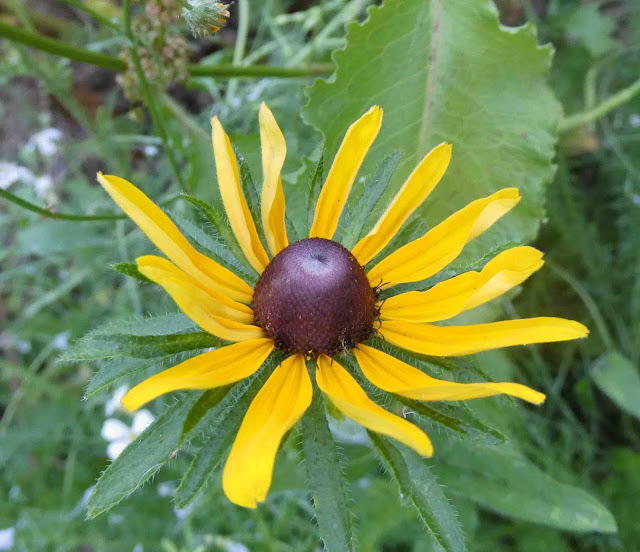 Now here's something new. These were taller than anything else. I'm going to keep watch over them for the next few days. It's hard to tell if they're getting ready to bloom, or whether they've already bloomed. I don't see anything like this in my seed mix, and so I can only think a bird or some other critter introduced it. We welcome all flowers to the bee garden, no matter whose idea it was. 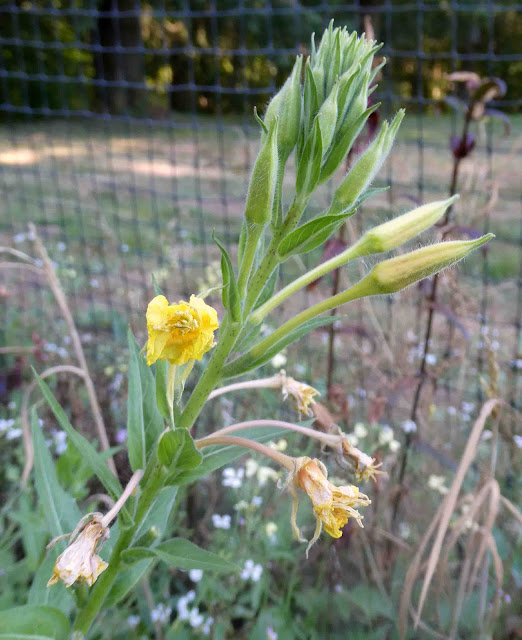 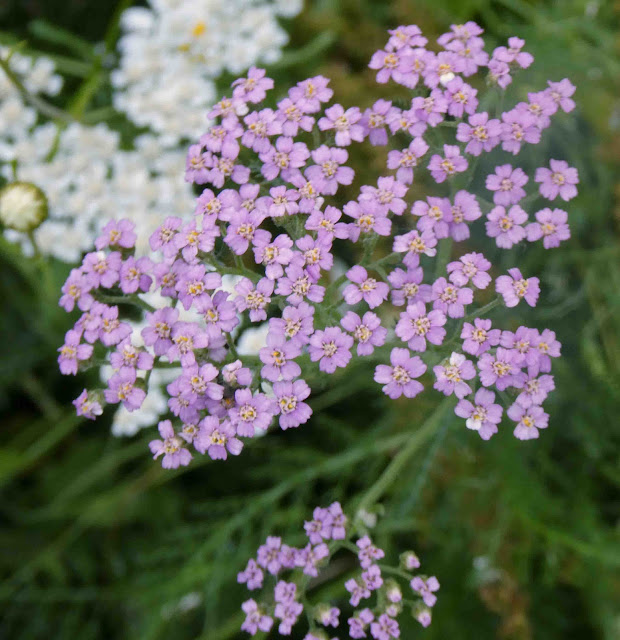 We have it in two colors. 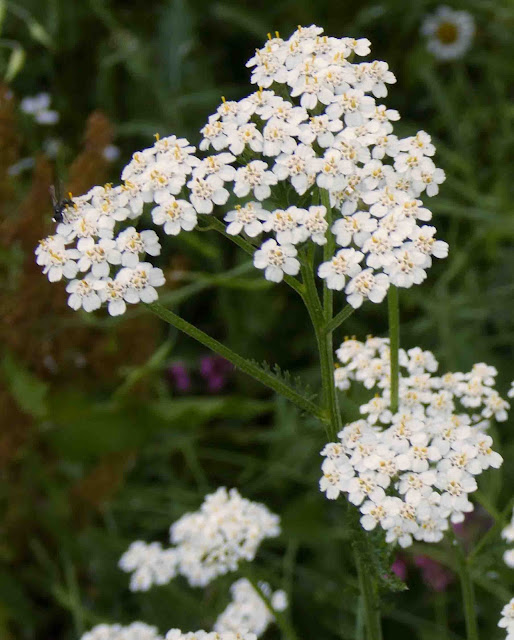 I found two more pickling cucumbers in the greenhouse. Yay! If I can get a half dozen or so, I'll have enough for a jar of refrigerator pickles. Mike loves them, and so it would be nice if we could get something for our gardening efforts this year. 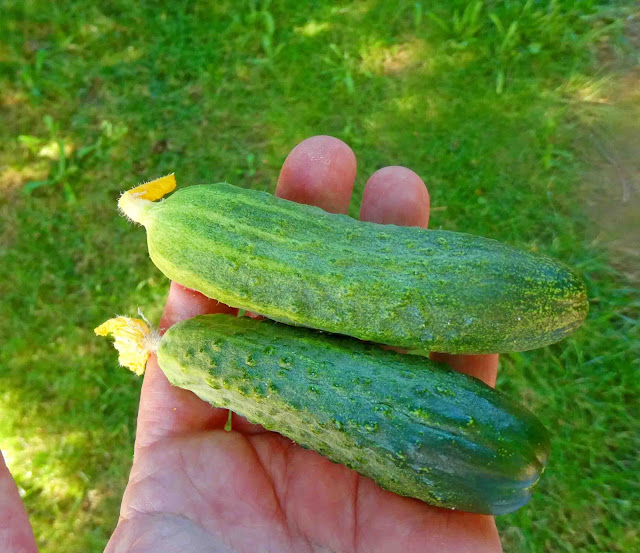 Okay, now here's the volunteer catnip. It is thriving in this rocky patch in which it decided to grow. The one I planted from a purchased pot around the front of the house looks about half dead. Go figure. I'm giving this until the last minute to get as large as possible before we leave. I'll clip it off at the ground and dry it in a paper grocery sack. We should have freshly dried catnip for the kitties within a week or two. They prefer it to the grocery store stuff. 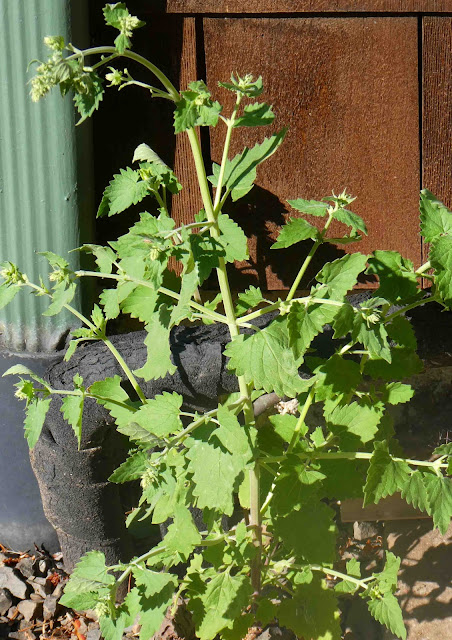 And that's all I have for you today. This morning I need to get out and water the flowers. I'll be working some more on my slow-stitching too. I feel at a loss about how to fill my time if I can't sew. I suppose I could start quilting the I Believe in Snowmen quilt. It's unlikely I can finish it before we leave, and so I'm hesitant to start on it. Besides, I can't sew the binding on until my sewing room is put back in order.
A better idea might be to bake some cookies for our trip. I can freeze them for now, and then pack them along when the time comes. Yeah...that's sounding like a better plan.
Tomorrow's post might be later in the day. Mae and I are heading over to the Swan Island Dahlia Festival in Canby. It's a photographer's paradise, and it's been several years since I've been able to go. Dahlias are on sale while the festival is on, and I want to buy four dahlias to plant next spring. Mainly, I'm looking forward to spending some "girl time" with my favorite daughter-in-law.
Okay, so it's Sunday morning. We've missed our Sunday morning pancakes the past couple of weeks, and so we'll enjoy those for breakfast. It's going to be hot today. We'll try to stay cool.
Posted by Barbara at 7:52 AM

I think I like wildflowers best. They just grow wherever they want. No one has to plant them. And then their seeds blow in the wind and they find a new place to grow. ~ Rebecca Donovan

You have a lovely garden full of blooms this year...that pink yellow-centered one is gorgeous!! Sadly none here...with this heat even the lily leaves have yellowed and are dying already--at least it was something green about!!

We are hoping for rain and I've been doing my abbreviated rain dance (my back won't let me do the entire thing!!Think Elain on Seinfeld--not a pretty sight!!) hahaha Hope all gets straightened out for you. hugs, Julierose

I've just recently started to make refrigerator pickles and so far my husband likes them. What recipe do you use? Unfortunately I have had to use regular size pickles from the grocery store. :( I have combined several but always on the lookout for some that others have tried and liked.

Beautiful flower pictures, as always. My 2 blue hydrangeas did not come back up this spring, and I'm quite sad about that. But my white ones are thriving.

Wow, your soil must be quite acidic to get hydrangeas that blue. I've given up trying to grow hydrangeas, mostly because the deer won't leave them alone. And I forget to add the chemicals to make them bluer. I do have one tree hydrangea (a Peegee), but it's suffering from borer damage and I don't think it's going to last much longer. It's over 30 years old. I hope you had fun at the dahlia festival. I love them, but never got them dug last fall., I have a source for free ones, but just didn't feel like all the work they entail.
Pat

Your yellow mystery flower is an evening primrose. They can be pretty, but they can also be really invasive. If you don't want a thousand of them in the garden next year, cut the stalk before the blooms set seed.
Your blue hydrangea is gorgeous! I have one, but it's scrawny from having been planted in a lousy location and then having my ersatz lawn guy "trim" it practically down to the soil level last year, and the blossoms are a much lighter blue. It's quite pretty, but I like yours better. (Lawn guy also pruned all the buds off my rose of sharon just as it was getting ready to bloom. I have fired him.)