You're probably waiting on tenterhooks to see if the carpet will be laid in the basement today, aren't you? No? Well, I sure am. As Monday morning's minutes pass with no notification, it's looking increasingly unlikely. Sigh. Even Mike, the eternal optimist and most patient person I know, is losing hope that the job will be finished before we go. There's no forcing the issue, except that they will have to move the furniture back into the house by week's end, finished or not. Also, we haven't paid them for anything, and so there's some incentive to get it finished. They can finish or else sit on their empty wallets until we get back. Even Congress might have been able to get the job accomplished faster, and you know that's saying something.

Okay, well, let's move onto happier topics. I filled the hoop on Pieces of the Past yesterday. 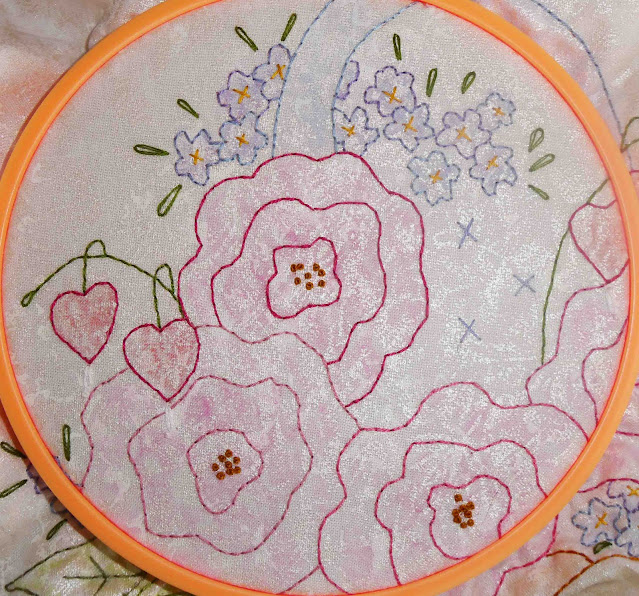 I should have this one finished in the next day or two. Also, I found the rest of my embroidery projects in the garage, and managed to pull out the box for the Joyful Journey quilt blocks. Fortunately, everything is cut. I have a lightbox upstairs, and so I can trace out the next design and have a new one to work on. With so much frustration, there must be embroidery. There's something gratifying about stabbing one's needle into something again and again and again without mercy nor conscience.
It was watering day yesterday. But first, I checked on this newby in the bee garden to see if any more flowers had opened. This is one weird plant. I don't think I've seen anything like it, even among the wildflowers we see growing at the side of the road. It almost appears that the flowers have faded before they even open. 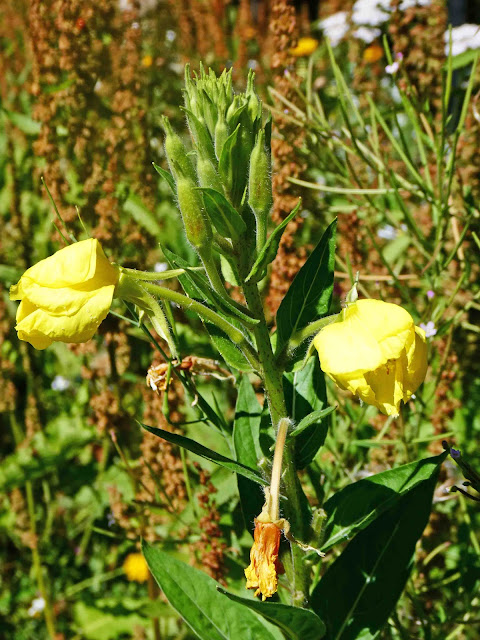 I held this one up to see the center. It occurs to me that I could take my phone out and use the "information" feature to identify it. I might try that later today. 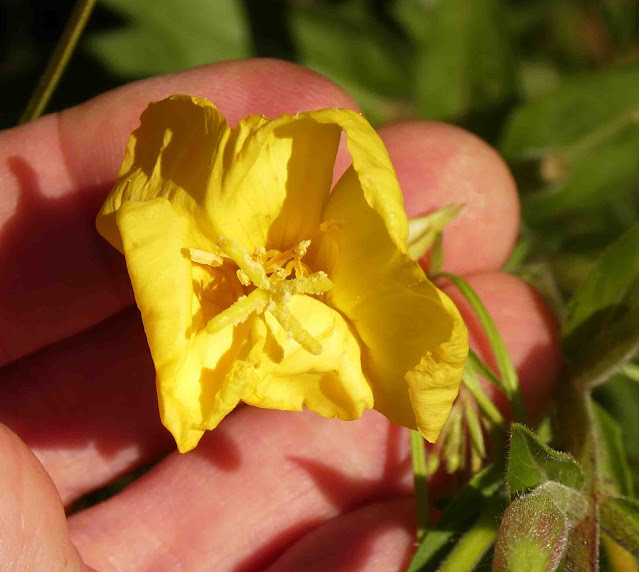 When I did my "every blooming thing" post yesterday, the hydrangeas around the back of the house got short shrift. They were in bright sun when I took those pictures, and so their colors didn't show well. I captured them in the morning shade. This is the variegated one. 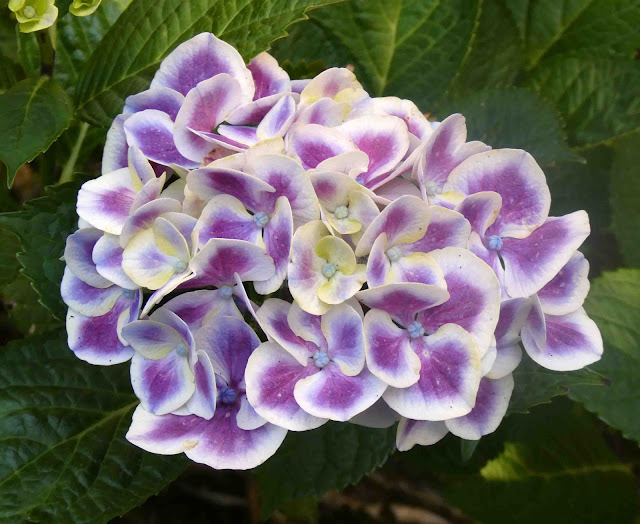 It's neighbor to the left has pink flowers and blue flowers on the same plant. 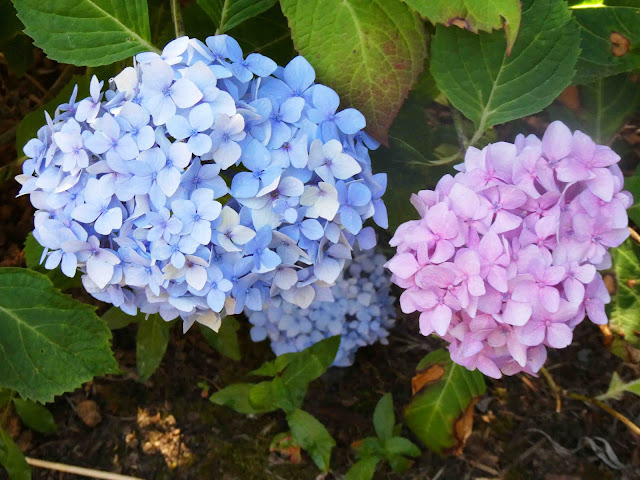 Sometimes it has pink and blue on the same flower. 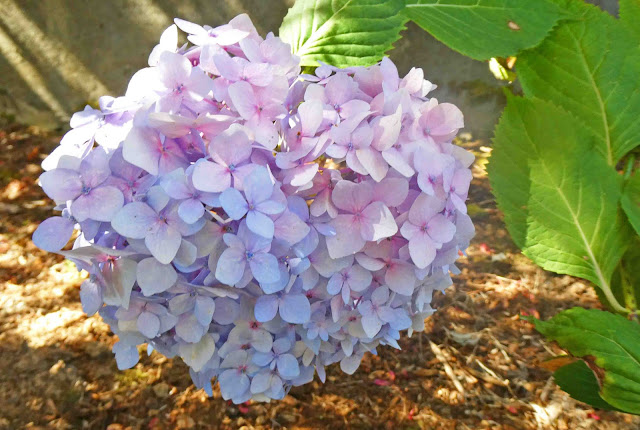 And let's just talk again about this bad cat. We let her out around 8:30 a.m. yesterday. She came in around lunch time for some kitty treats, and then she was back out. We could NOT get her in the rest of the day until well after dark. We feared she'd completely regressed to her formerly feral life. 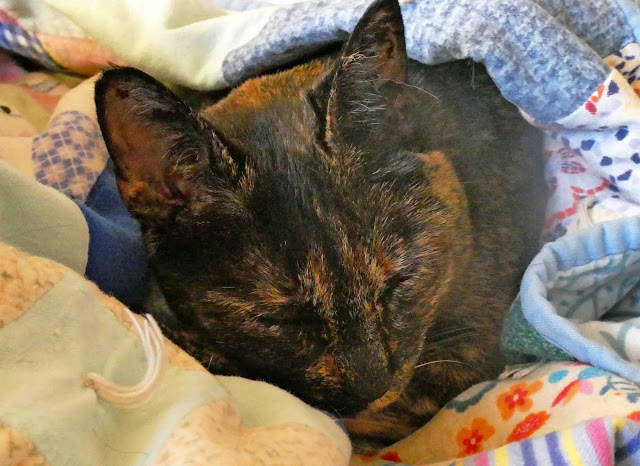 We even resorted to a cat's worst nightmare: riding the ATV (aka the "Critter Getter") around trying to scare her up to the door. When the ATV didn't work, Mike fired up the leaf blower. Nothing. We finally gave up, setting a timer every 20 minutes and checking the door when it went off. Finally, on our last check before turning out the lights, she came in. Well. Don't you know her wings are clipped. She's not going out again before we leave.
Smitty is completely worn out from pacing the floor half the night waiting for her to show herself. 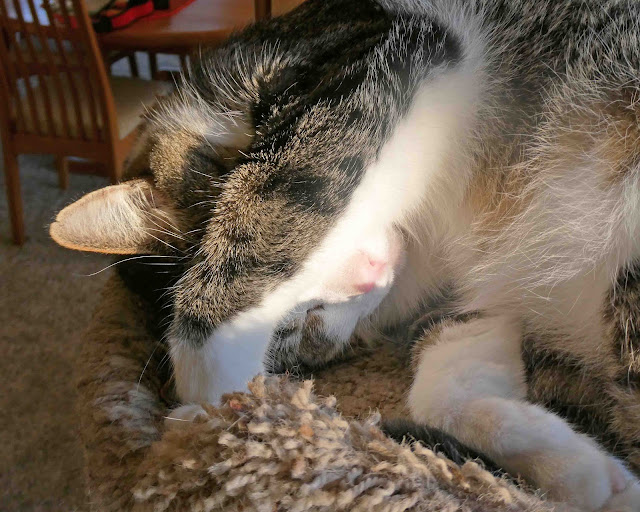 Cats...can't live with 'em...can't live without 'em. If truth be told, I think they know it.
This morning I'm heading over to Canby for the dahlia festival. Mae is going with me, and so it's going to be fun. I've charged the batteries on my DSLR camera, and so look for some pretty dahlia pictures tomorrow morning. And, please, cross your fingers along with me. We haven't given up all hope on the carpet today. Lots of finger-crossing might get the job done...or at least get it on the schedule.
Posted by Barbara at 7:45 AM

One day's delay is another day's lack of progress. ~ Stuart Bowen

What an absolute nightmare about that carpet--they are bad bad boys!!! I am crossing my fingers for you--keep on stab stab stabbing that embroidery--maybe that'll get 'em moving!!

Nice that you can get out for a bit and try to forget your woes with the Dahlia Fest...hugs, Julierose

It's hard to tell from the picture but that might be an evening primrose, which would explain why the flowers appear faded. It blooms at night.

I hope by the time I'm typing this comment the carpet is being laid, and you are happily enjoying the dahlia festival with Mae. That sounds like so much fun! I just finished grocery shopping, all went well. We are having lovely weather here today, so not sure there will be much sewing. We'll see! That Sadie! What is up with her lately??

The yellow flower is Oenothera, Evening Primrose. I brought one home from Italy about 20 years ago and every now and again one will pop up in my garden. I think it is a native in your country.
I'm worrying with you about the carpet. I'm living in a 'building site' at the moment so I've stopped worrying about it to keep you company.....lol

I think that is an evening primrose. Go out atsunset to watch them unfurl.

Argh! That and our outdoor teak furniture. The container ship arrived at the Port of Oakland and was delayed 2 weeks due to the back up of unloading. Once at the dock it took about a week to unload the boat and clear customs. At least we know the container for the store is here. Now we are waiting on truckers to pick up the container and deliver to the store. The truckers are on a work slow down due to a new California law about their work and employment status. It’s been 2 weeks since the container has been on the dock waiting for a trucker.

Is your carpet having a delivery problem in getting to the store? Or finding enough qualified workers to hire? This is a constant issue in our area. Hopefully the carpet will be laid soon.

It's enjoyable to watch the flowers open for the evening primrose. They just slowly open, you can see it happen. It's cheap entertainment, it's better than watching the grass grow!

It's such a nightmare when work doesn't get done when it's supposed to. I hope the carpet gets laid before you leave on your trip. Young missy Sadie needs to behave, staying out so late. My daughter's female cat is behaving badly as well. She likes to sleep in doors most of the day and then try to escape after dark.

I suspect that flower is a moonflower - only blooms at night. We had them in our previous garden and you had to be out in the middle of the night to see them. At one point we thought we'd watch them open and parked in our lawn chairs (much to the astonishment of the neighbours I'm sure). Worth it though to watch them start to shake and then open a wee bit, shake some more (altho' maybe tremble would be a better term) and open a bit more until finally they were in full bloom. By morning the flowers were spent. PRetty fascinating.