If you're like me, a long weekend throws everything off. It's Tuesday, but it feels like Monday. Yesterday was Monday, but it felt like Saturday. Perhaps that's the reason it took me about half an hour to find the Flannel 4-Patch project when I was ready to sew yesterday. As you know (if you've been paying attention), we've been moving things all around in the basement for months, readying the place for plumbing repairs, clean-up, and new carpeting. Despite all that, the sewing room has stayed mostly intact, although some things have been moved to different locations as new spaces have been cleared.

I searched and searched and searched, picking up the box that contained my project at least three times before I noticed I had it in my hand. It's kind of like looking for your glasses while wearing your glasses. (My apologies to my friends from Facebook who already know this story from too many tellings. I always like to focus heavily on the parts of my life that indicate my advancing senility. You never know when you'll need a good excuse for something.)

But let's just back up to the beginning of the day. When I finished writing yesterday's post, I noticed Sadie was enjoying the morning sunshine from our bedroom window. 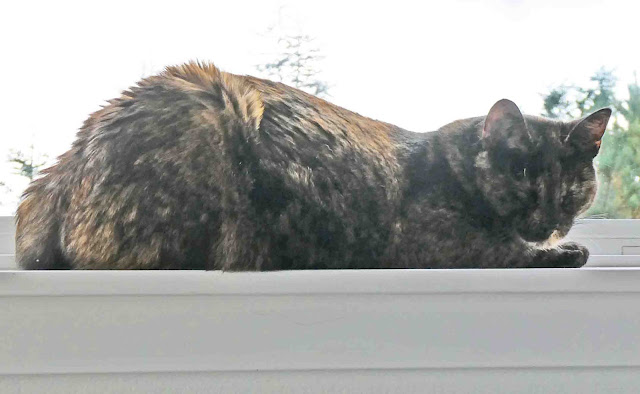 It's a treat for her when she can be upstairs. Smitty has drawn a bright red line at the top step where no other cats but Himself can venture. A cat has his limits, and they must be enforced.
Downstairs, I stitched up another section of Calendula Patterdrip's broom. I'm getting very close to the broomstick. 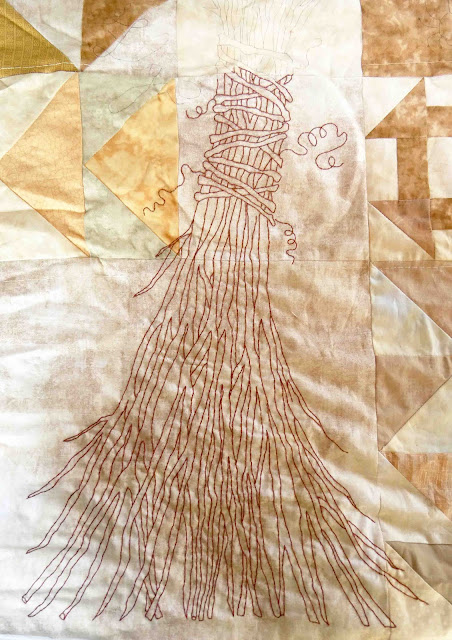 After that, I took a walk outside to look for the new bloomers. I found one of the daylilies open. These are going to be very pretty in a day or two more. 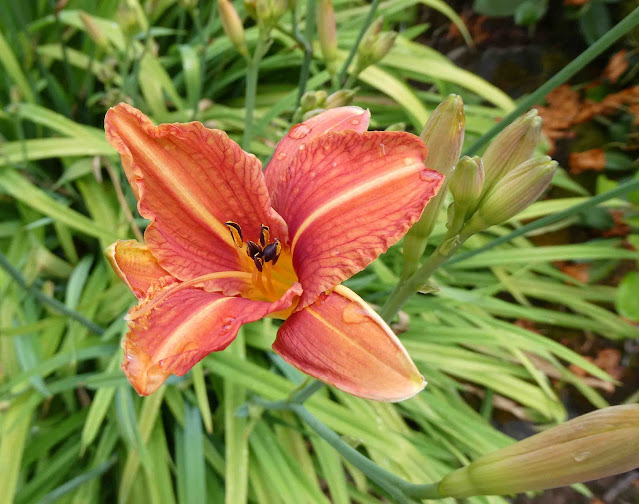 Also, I noticed one of the hydrangeas is beginning to color up and bloom. There are other hydrangeas. They are still in tight buds. 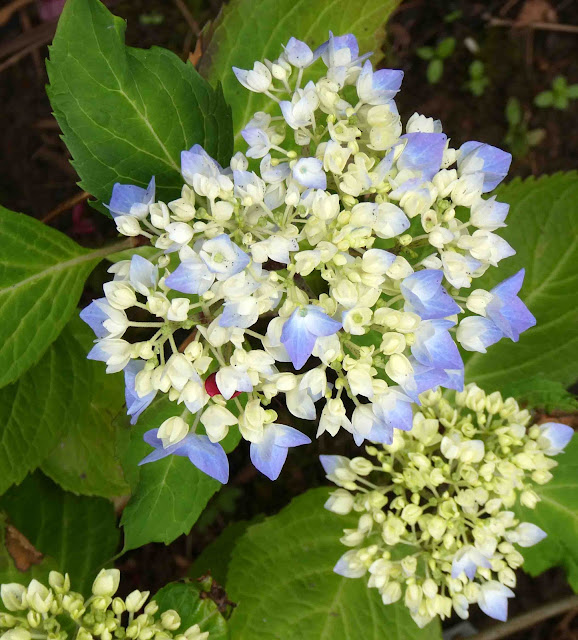 The Red Cardinal clematis has three flowers now. I'm hoping some others will open before these start to fade. 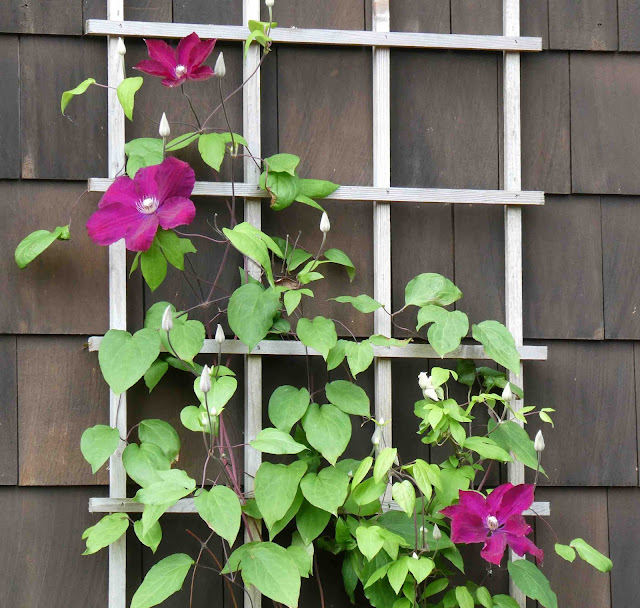 And yay!!! The first little tomato. I planted this Sunsweet cherry tomato from a mature start way back in April. The deer and squirrels have been eating it, and so I'm only just now seeing the first fruit. 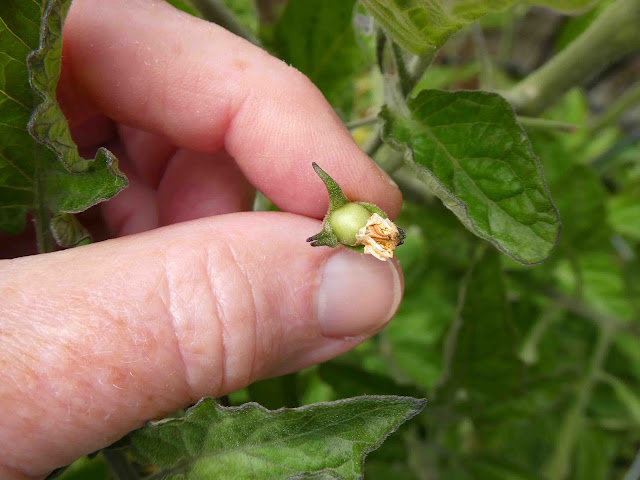 Having been no help at all finding my project, Sadie was at the ready to help with the sewing part. 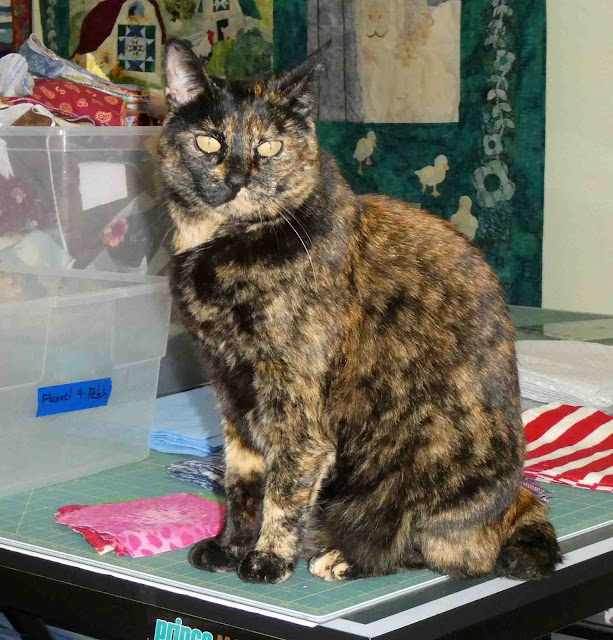 Together, we sewed two more rows for the Flannel 4-patch. The top three rows were done in the last go-round. I'm in the process of making three more rows, and the bottom two were made yesterday. They aren't yet sewn to the top three. I'll make one more row today, and then sew the whole thing together. 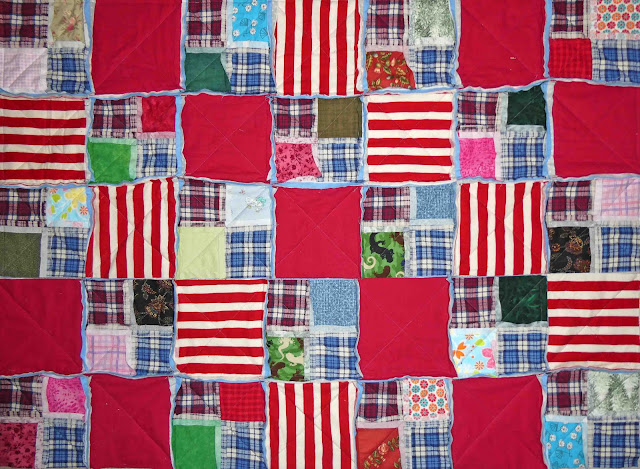 I wasn't sure I was going to like this when I started, but as I add more rows to it, I like it better and better. Here's how it looks from the back. 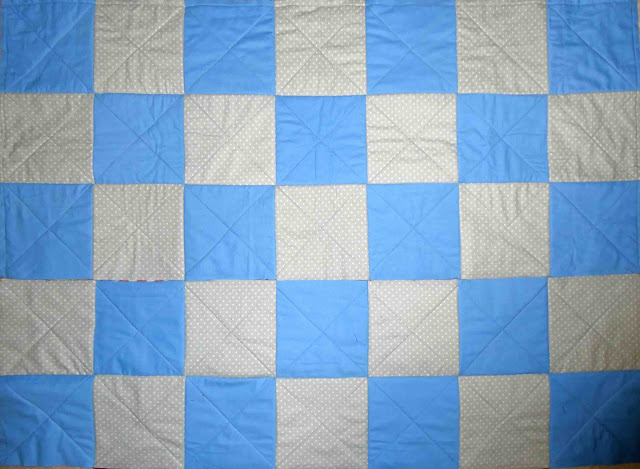 Today's goal will be to make one more row and then sew the six rows together. When that is finished, I'll start in on another section for the Purrfectly Pieced quilt. I started this last time I worked on my WIPs, and just one of five sections has been completed.

Probably I'll make a trip into town today. I need to mail off a package, and I need to pick up a few things at the grocery store. There's nothing on tonight's menu, and so I'll have to figure something out in my travels. But that reminds me to tell you about a new recipe I tried last night for Bulgogi Sloppy Joes with Scallion Salsa. How's that for a Korean-American fusion of foods? This isn't my picture. I swiped this one off the website. 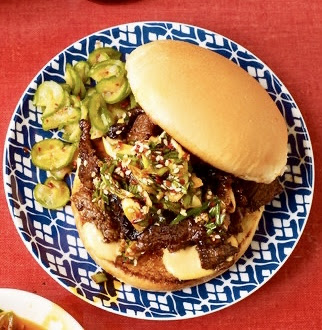 They aren't difficult to make, but they do require some advance preparation. The meat (I used skirt steak) is sliced then, and then marinated overnight in a very interesting marinade. There is a pureed Asian pear in the marinade! If you read the directions, they're a little scary. When you're ready to make the sandwiches, you use a large skillet and remove the meat from the marinade using tongs. Even allowing it to drain until it's no longer dripping, I still ended up with a lot of liquid in the pan. Given enough time...about 20 minutes, in my case...it will evaporate, and the meat will start to look crispy at the edges. When I read the directions, I didn't believe it, but it's true. Just keep cooking until the liquid is gone, and you're meat will probably be ready by then. The only thing I would say about this recipe is that it was very salty. When I make it again, I'm going to try substituting 1/3 cup water for a part of the one cup total of soy sauce. I was using low-sodium, but the dish was still a little too salty for our taste.
It is suggested they are served with Sam Sifton's Cucumber Kimchi, and that too is marinated overnight. The cucumber kimchi was surprisingly crunchy given how long it sat in marinade. We liked that a lot. I'd make it again even without the Sloppy Joes to go with it. (I left out the "optional" krill/baby shrimp. That didn't sound good.)
So that was as celebratory as we got for the Fourth of July...a new recipe, eaten outside to enjoy the nice weather. There weren't too many fireworks around our place, and they stopped early enough we weren't bothered by them. Judging by some comments I read on Facebook this morning, others were not so fortunate.
Okay, so time for breakfast, and time to get going on the day. It'll be Monday on Tuesday around here. I'm hoping I won't get lost anywhere along the way.
Posted by Barbara at 8:37 AM

It does not matter how slowly you go as long as you do not stop. ~ Confucius

I think your flannel quilt is going to be perfect for snuggling under this fall and winter. I'll admit I chuckled over your search for the project!

I have had the same problem in trying to find some of my projects lately. I have to start organizing and labeling soon. That flannel quilt looks quite comfy. I love all of your flowers.

I'm like you in getting the days all mixed up when there's a holiday. Then again, I can manage to mix them up even without benefit of a holiday!
Looking forward to seeing the next bit of the Purrfectly Pieced project.