My morning was busy yesterday. Of course, no day can get off to a good start without some slow-stitching. I stitched up the next section in my hoop. 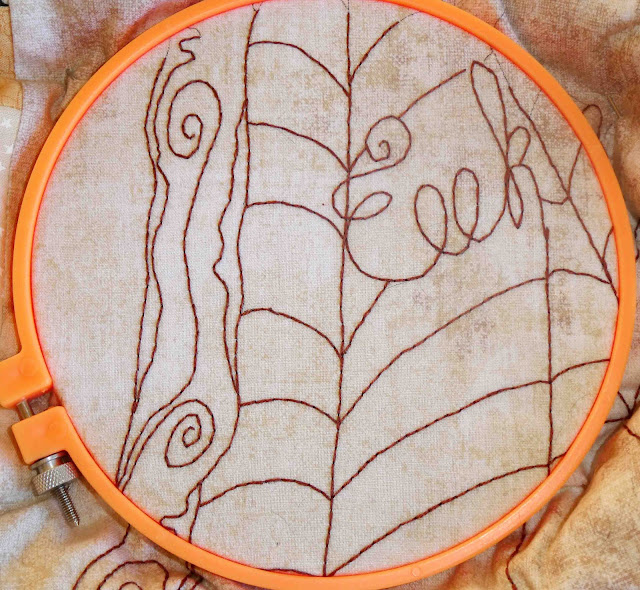 I think that "Eeek" there is to remind me that I'm close to finishing this piece. All that remains now is to stitch to the upper right corner in the image below, and this one will be finished. 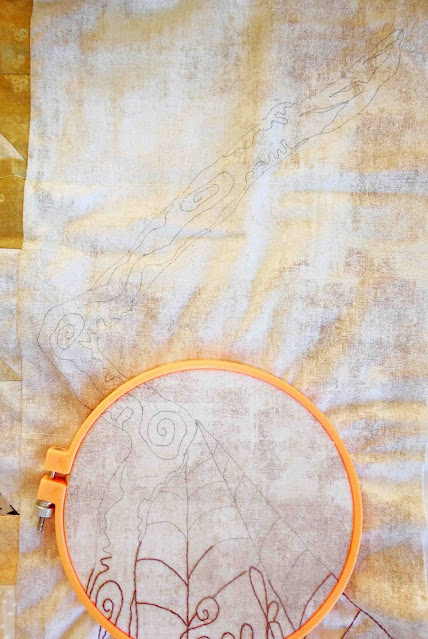 I'm happy to be nearing a finish since I was pretty sure this might be a life sentence of stitching, but there you go. Little by little, they get done. But in Eeek-speak, I told myself I need to get busy making up another stitchery!
After I'd finished my slow-stitching, I had in mind to do a workout. Mike decided to go back to bed for a while, though, and the treadmill is in the bedroom. (I like being next to the window so I can watch the kitties and the birds outside.) Instead, I did my outdoor chores first. The bird feeders needed filling, and the flower pots needed watering. It was a good excuse to take a walk around and check in with the blooming and fruiting things.
The blue hydrangea is in full bloom now. 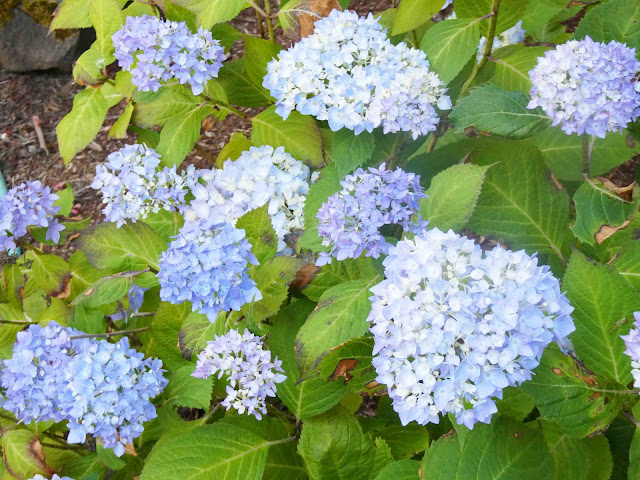 To its right, the variegated pink is starting to open too. 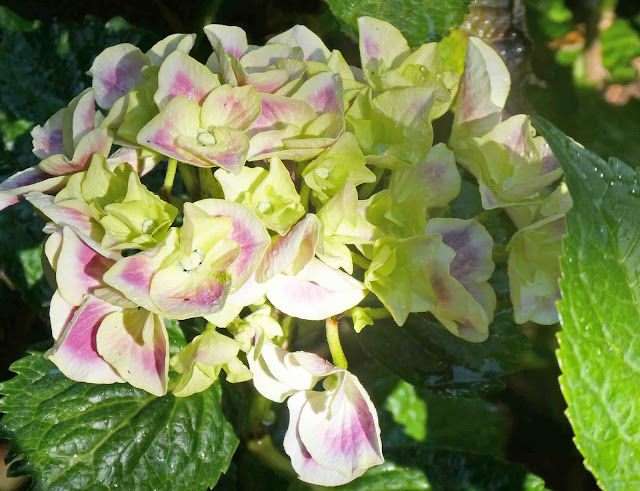 Around front, the purple has opened up just a bit more. This will be covered in flowers within the next few days. 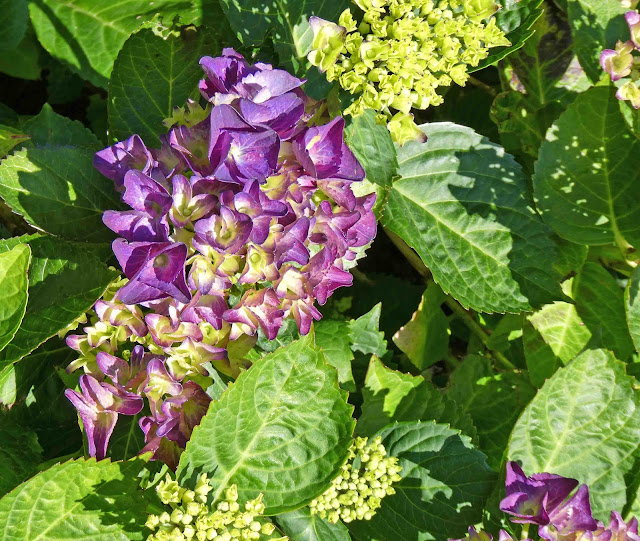 The echinacea are set to make an appearance any day now too. 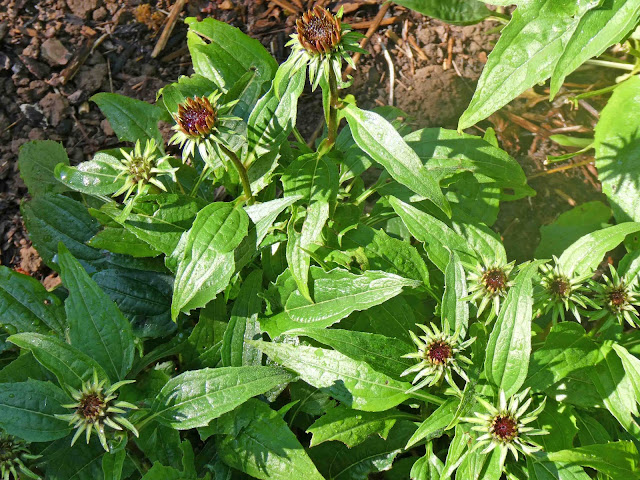 I counted 34 apples on our apple tree. I'm hoping I'll get enough for an apple pie or an apple crisp, but these have a long way to go. They're only about the size of a large olive right now. 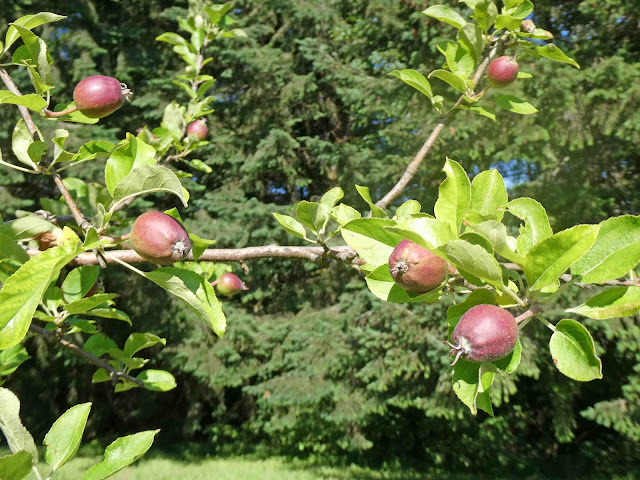 We have a small crop of cherries on the Black Tartarian tree. The Bing has produced nothing this season. We had that snowfall in late April just when these were blooming. I'm happy for any cherries we can get this year. Fortunately, I still have plenty that were canned from last year's bumper crop. 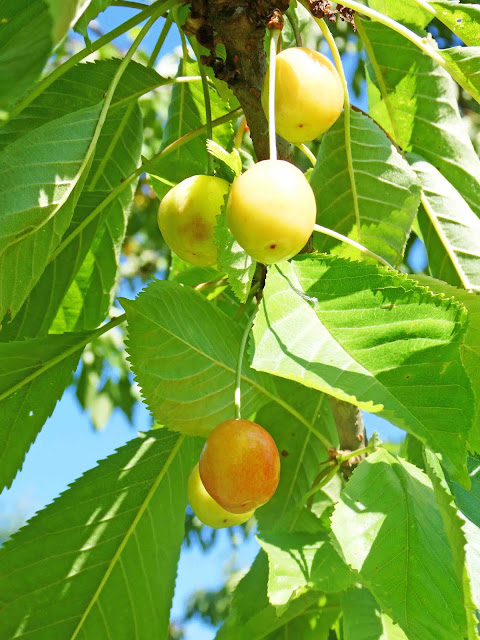 Inside the greenhouse, I noticed another flower had formed on the pickling cucumbers, and I also noticed these eensy-weensy cucumbers. There were at least three. Maybe we'll get some cucumbers after all. 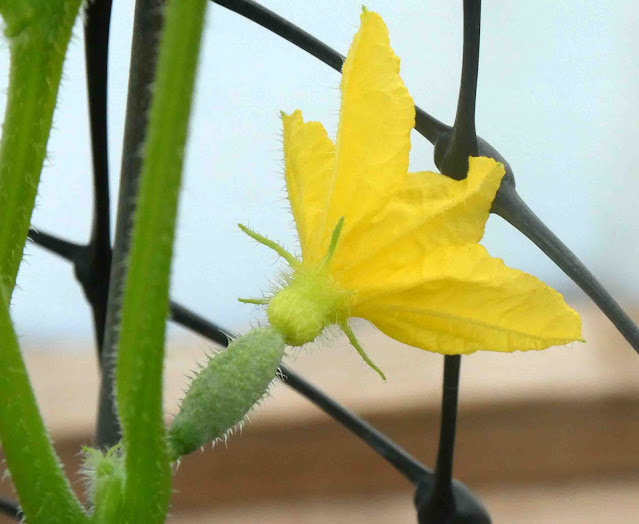 Only one of four blueberry plants has produced berries for this first season of their lives. Is it just me, or do these seem to be taking on a blue tinge? 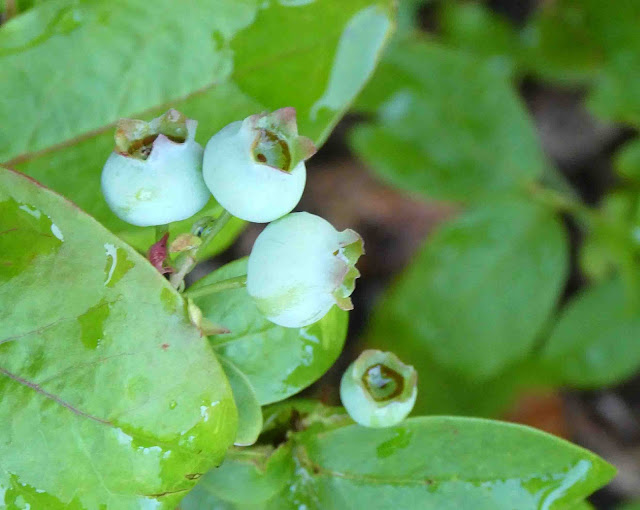 Even though there are just a few, I'm still planning to make Lemon Cheesecake Mousse and use the blueberries as a garnish along with a little mint leaf. Here's one I made a few years back: 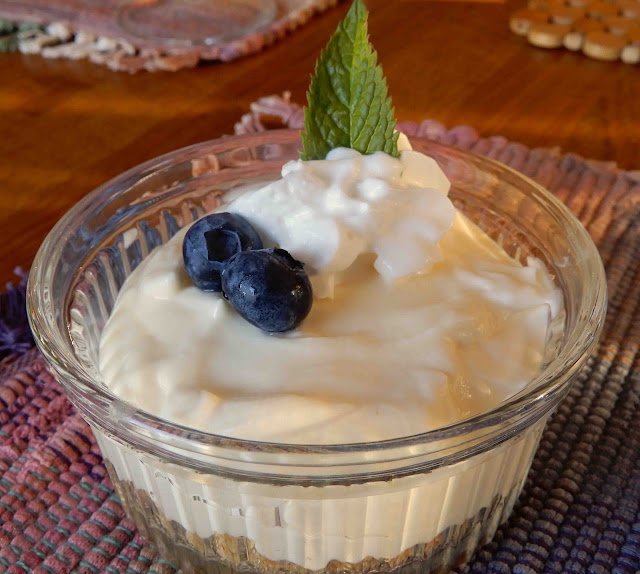 If you only try one of the many recipes I link to on this blog, you simply must try this one. It is so delicious and light. It's an excellent dessert after a big meal. It's also no cook, but it does dirty a lot of bowls. You can find the recipe right here. Making half the recipe is enough for four people, and so this dessert for two becomes dessert for two for two nights.
Okay, and so back inside, I did my workout, and I had one housekeeping chore to do. As I said, it was a busy morning. I was finally able to get into the sewing room after lunch. Smitty was my ample-bodied assistant for the day. 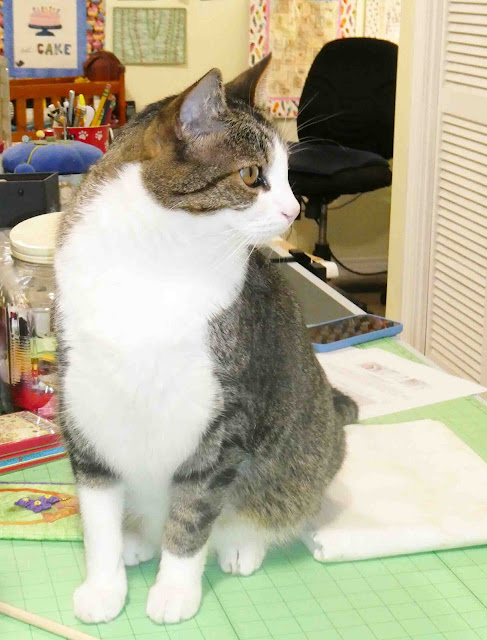 He was super helpful getting the binding sewn on to Ella's Flower Garden. I used the same green I'd used as repeating "leaves" in the block pattern. 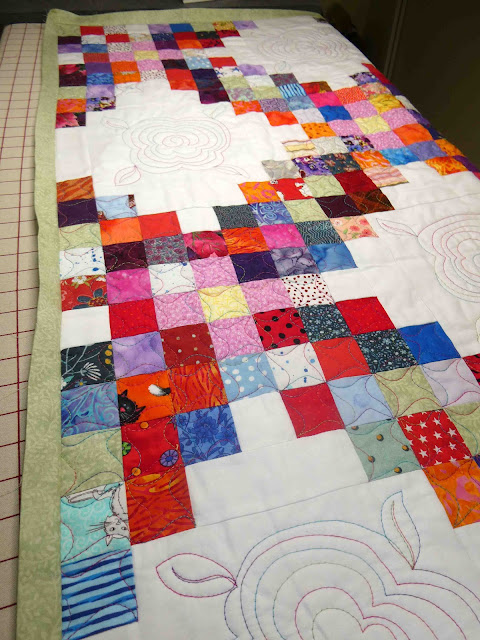 In response to my Eeek moment, I made up the next block for the Domestic Affairs quilt. Both projects were packed up to take along on our getaway next week. Take a look at the image below, though. Do you see a problem? 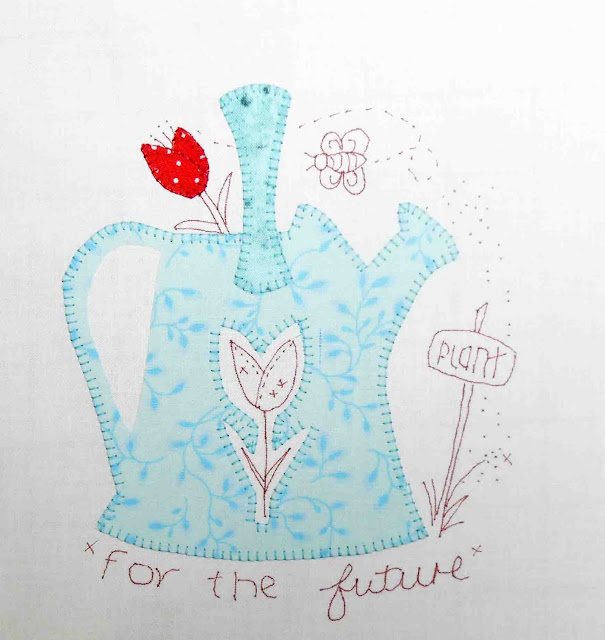 Last night, I woke up and realized I'd forgotten to top-stitch the inside of the handle on the watering can. So I fixed that first thing this morning...even before I'd had my coffee. The kitties wondered what the heck was going on...we never sew before our coffee. 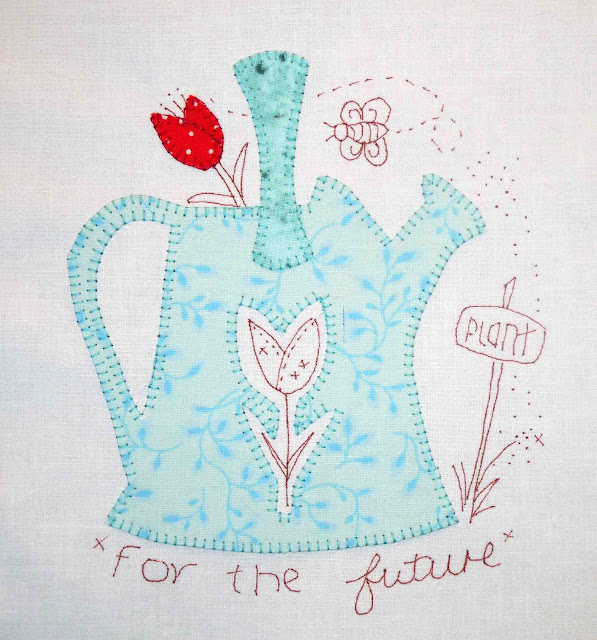 Phew! That was a close call.
Okay, and then I tried a new recipe for Hoisin Sloppy Joes for dinner. This isn't my photo. I swiped this one from the internet. This was really easy and very tasty. 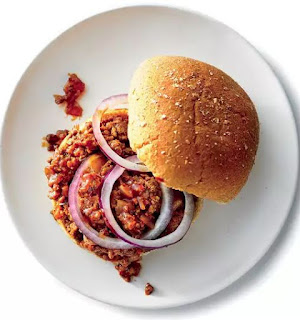 (Image credit)
I made it as written except that I substituted Mai Ploy for the Sriracha. I prefer the sweetness of the Mai Ploy over the spiciness of the Sriracha. If I'm remembering right, I saved this recipe while we were following the Cooking Light Diet. The Cooking Light Diet has been discontinued, sadly. We lost quite a bit of weight when we were following it, and so we were sad to see it discontinued. In any case, this has less than 400 calories per Sloppy Joe, and so it's a diet-friendly dinner. It took only about 10 minutes to make it from start to finish. It's a good recipe for RV cooking...always appreciated.
Today I'll tackle the laundry and I have one other housekeeping chore to do. After that, I'm going to get busy sewing together the Ties & Tails quilt. There's a section in the middle where I'll need to add some red patches, and there's going to be a Y-seam there. I've done Y seams before, but it'll probably take some figuring. 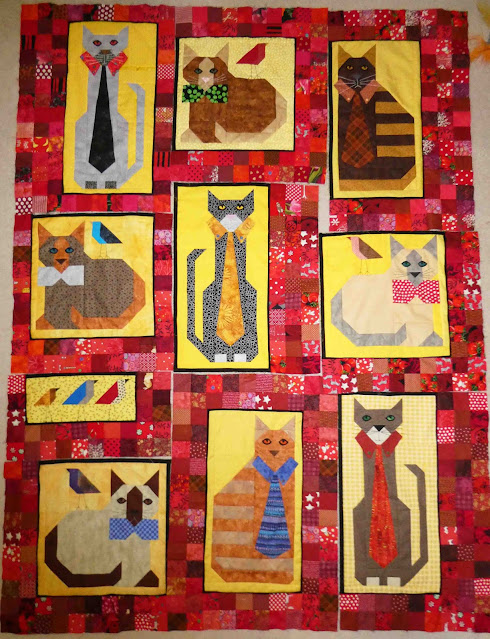 If memory serves there are a couple of borders to sew on as well. That should keep me busy for the rest of the day and beyond.
If you haven't already entered my giveaway, there are two days left. Don't miss out. A big thank you to the many of you who have left such nice comments, and it's been good to hear from some of you lurkers too. I tend to be a lurker myself, so thanks for stopping long enough to say hello.
Okay then. Let Friday's fun begin!
Posted by Barbara at 8:15 AM

Let the beauty of what you love be what you do. ~ Rumi

My belated congratulations on your blogiversary. I didn't comment on the giveaway post because I don't "need" any more fabric. I do enjoy your posts and admire how productive you are. Also enjoy the armchair traveling I get to do.
Pat

I think those sloppy joes might be our dinner tonight - using pork rather than ground beef.

I don't sew before coffee either, as a general rule. Safer that way. LOL

The cat quilt is so FUN! Enjoy your trip!

Congrats on your blogiversary. This lurker has your web page at the top of my bookmarks.

Don't you mean a partial seam rather than a Y seam? They're much, much easier to implement once you get the order straight.

Congratulations on 12 years Barbara. I can’t remember how many years ago I started following you. If I recall, there was a posting with you and your family and you had made a cat quilt(duh lol) for Matthew’s girlfriend at the time. At least this is my recollection- I’m old you know-well actually we’re the same age lol. So of course you piqued my interest. That’s a lot of writing and picture taking and I feel like we’re friends even though we’ve never met! One day maybe. Don’t enter me in the giveaway because I already have that fun fabric collection. Haven’t decided what I’ll use it for but I love the mid century look of it. Cuz you know I’m mid century-ish myself! I always enjoy your ramblings and photos and of course your cats.