Yesterday I got a bee in my bonnet to finish everything about the great closet-cleaning-out extravaganza we've been engaged in since discovering our plumbing leak back in April. And don't think for one minute that we would have been motivated to do any of this were it not for the plumbing leak. We've been accumulating stuff for decades, despite our insistence that we were going to get on the cleaning-out bandwagon. As it turns out, disasters are good motivators.

So there were more boxes to take to Goodwill, and then we drove across town to take my two custom-built classical guitars to a music store that will sell them on consignment. I've had them listed on Craig's List and eBay with nary a nibble, but plenty of spam. While across the river, we dropped off a few things with Matthew, including a ukulele, an album of his senior pictures, and his baby book. And that's the last of it. (Dusts off hands and then raises fists in victory.)

It was another warm day. The kitties were outside for a while, but then came in and melted across various surfaces like so much tiger butter. Smitty was especially droopy. 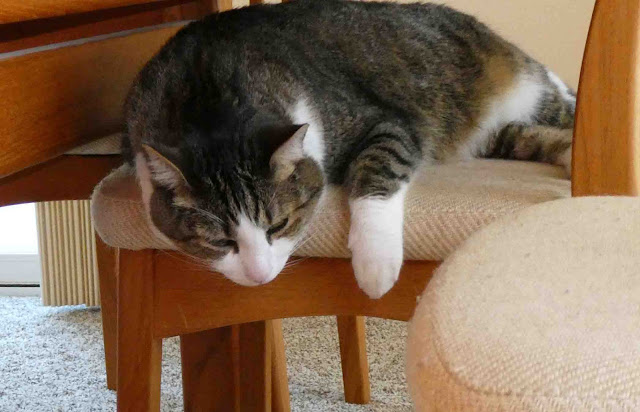 Sadie laid down in her brushing spot. When one hides under bushes to avoid sun exposure, one picks up a lot of pine needles and other plant droppings. She needed a good brushing. 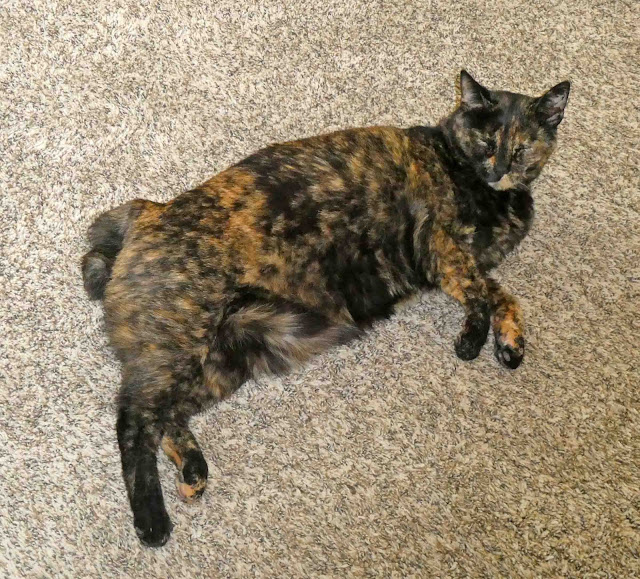 The only morning slow stitching I did was to stitch up the next "name plate" for the 12th Shop Hop block. 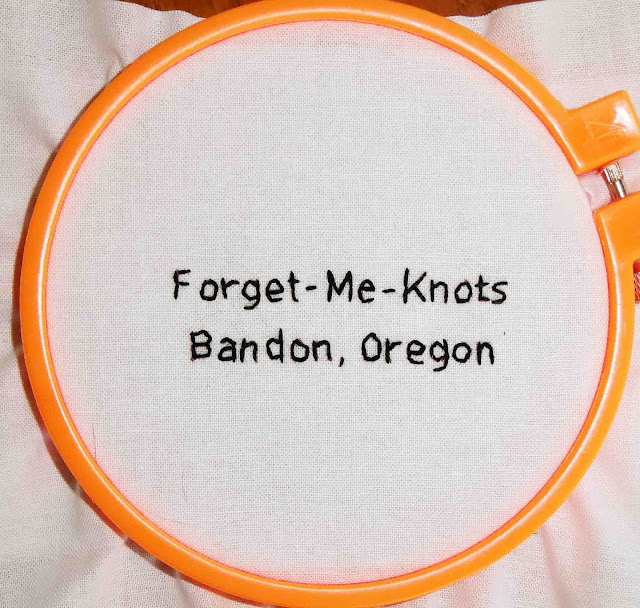 I'll get to sewing the block together today.
We stopped and got a late lunch at Pizzacato, where we can get pizza by the slice. It meant we weren't hungry for dinner last night. We didn't arrive home until around 3:30 p.m. I sat in the shade outside and stitched up the last of this portion of Calendula Patterdrip's broom. 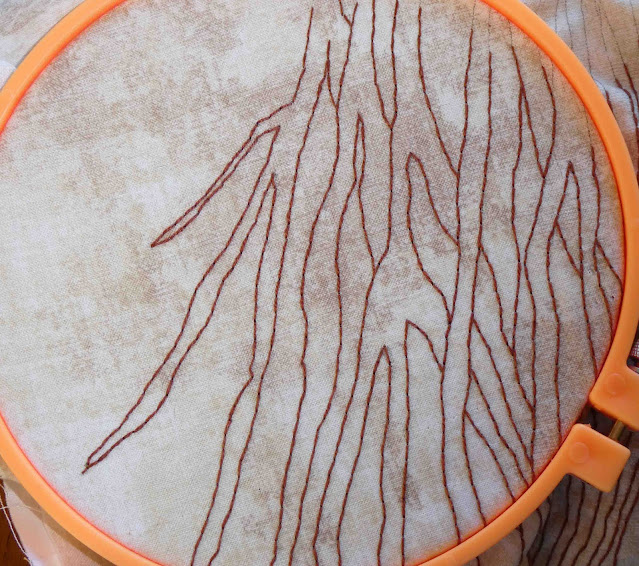 Now I've moved my hoop up, and I'm happy to announce I can fit the entire width of the broom in my hoop. It shows I'm making progress on this. 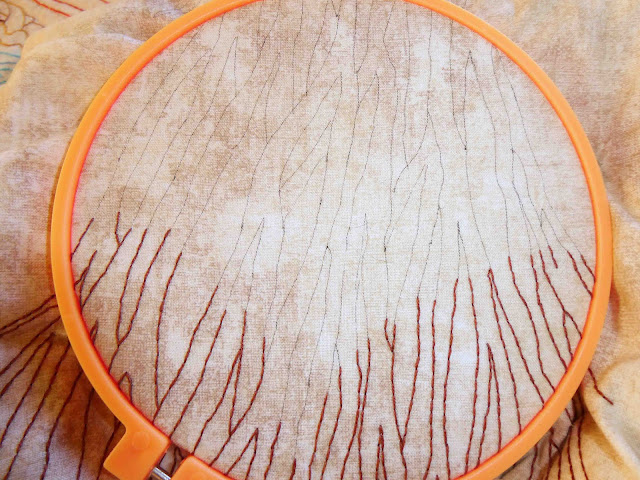 Today will be a mostly sewing day unless something unexpected pops up. The weather is much cooler today, although still sunny and summery. Possibly I'll get out for a walk. On the other hand, a lazy day seems completely in order. We'll see which side wins.
Posted by Barbara at 7:16 AM

To live more simply is to unburden our lives - to live more lightly, cleanly, aerodynamically. It is to establish a more direct, unpretentious and unencumbered relationship with all aspects of our lives: the things that we consume, the work that we do, our relationships with others, our connections with nature and the cosmos, and more. ~ Duane Elgin

I'm taking a cabinet today, inspired by you, and the fact that I need to get it cleared for the upcoming expansion project.

One doesn't want to have a disaster to force cleaning out things but it seems sometimes it takes one to really get us motivated. Good for you!!
And yay for broom-widths into hoops!

My mother had a Lane cedar chest just like yours. I think she gave it to my older sister. My grandmother's hope chest was far more interesting. She went through it with me once when I was about 9 years old. As well as the expected quilts and table linens, there was a huge stack of "risquê" postcards from Florida, a bears paw from a bear her did had shot, several wooden cookie rollers and a fox fur coat with foxtails for the collar. I have no idea where the chest or any of the contents wound up, but the memories are certainly entertaining.