The weather is heating up at the Three Cats Ranch. I believe yesterday might have been the warmest day of the year so far, and today will be even warmer. A year ago, we were trapped under a heat dome, and the days were *very* warm...record-setting heat. Just yesterday, I read in our local newspaper that nothing like that is anticipated for this string of warm days. After so much rain, we're reluctant to complain about the sunshine.

Sadie knows what to do. She hides out under the dwarf Japanese maple tree outside our living room windows. We call this the "umbrella" tree. 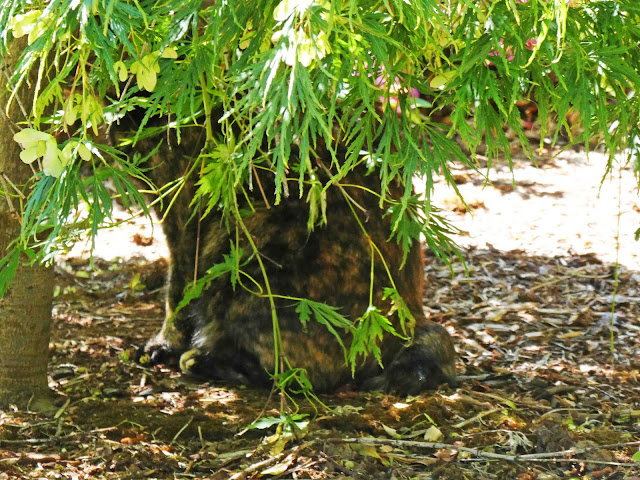 It's impurrtant to purrtect your furs from those cancer-causing sun's rays. On the other hand, it's dirty under that tree, and so it's equally impurrtant to attend to one's purrsonal hygiene. We're not savages, you know. 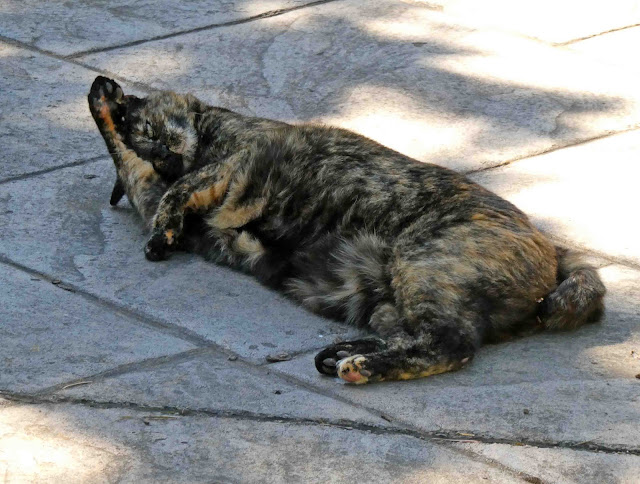 I was giving the flower pots a drink of water. I'm happy to see that the snapdragons I planted at the beginning of April are making a comeback. The squirrels ate all the flowers I planted within the first hour or so. 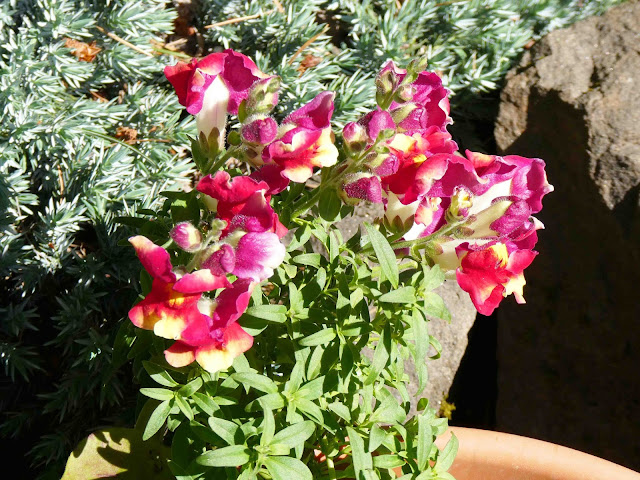 There are fewer squirrels now, Smitty having dispatched at least three that we know about. Mike relocated another seven. There are still plenty, but they've left this dahlia alone too. Possibly when I go outside this morning, I will find it bitten off again. 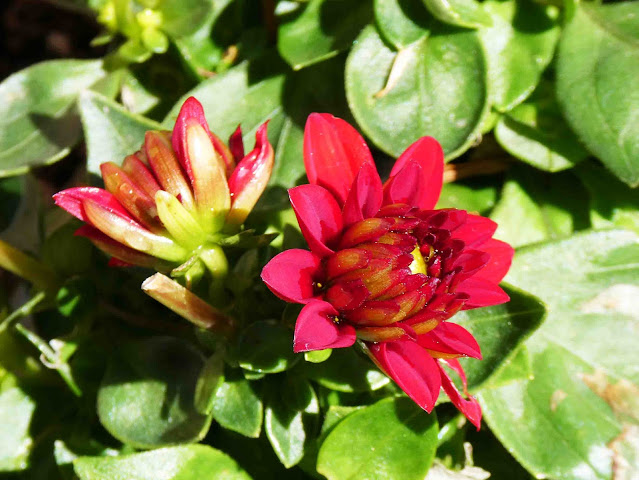 While the workers were downstairs pulling up our "contaminated" carpeting, I was stitching on Calendula Patterdrip's broom straws. It's moving along, but there is still a ways to go. 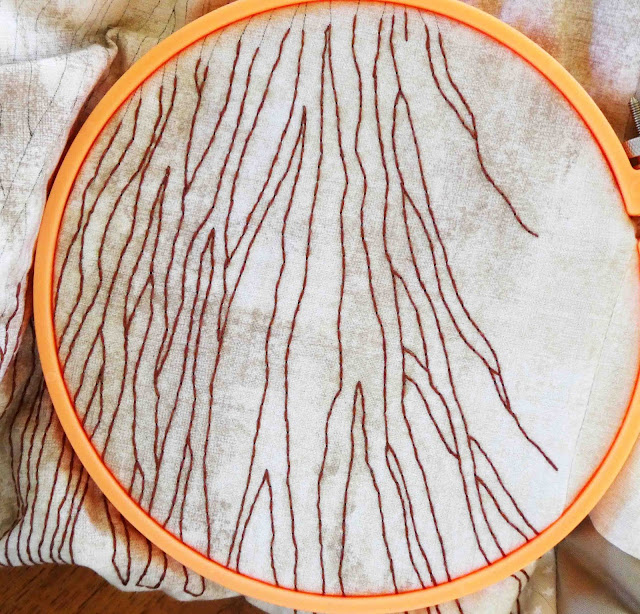 When they were finished pulling up the carpet, this was the state of our guest room. What isn't showing in this picture is the outer family room where all the furniture and bedding is piled up. The room looks pretty clean now, but there's still a big hole in the wall where the plumbing leak was, and the floor is down to bare concrete. There hasn't been much progress on the room given the nearly three months since we discovered our leak. 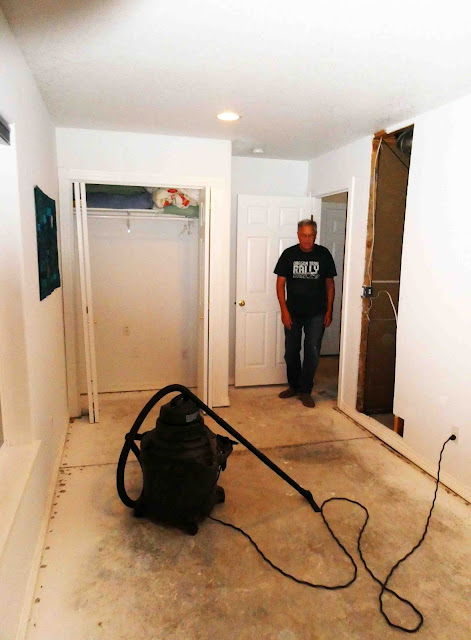 As you know, we've been working hard cleaning out closets and getting rid of a lot of stuff we no longer want nor need. There was half of one closet still to be done in my sewing room. I'd already done my sewing stuff on the right side of the image below. 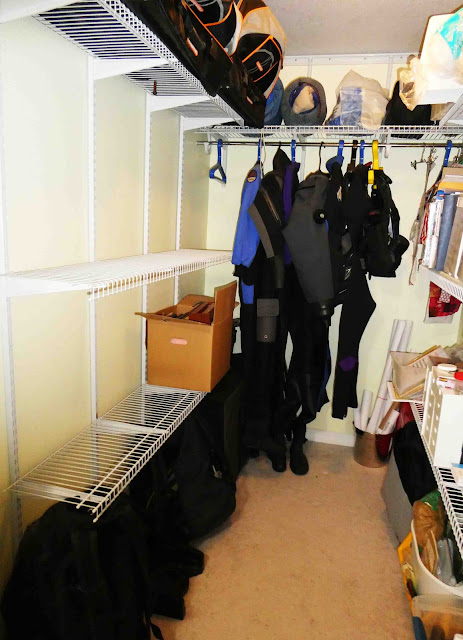 On the left side was a bunch of long-forgotten junk. Old cameras...I mean, real antique stuff. There was even a roll of undeveloped film. (No, we aren't developing it.) The shelves you see there were stacked high with old backpacks, sleeping bags, and scuba diving equipment. Toward the back is more diving equipment. All of that will be sold since our diving days are over. Above are some HUGE bags we used when we traveled with our diving equipment. It would probably cost a fortune to check those bags onto an airplane nowadays. I'm showing you this picture to show you all the shelf space that has opened up for my sewing stuff. I keep my sewing room pretty tidy, but there are still a lot of bins sitting around because I have nowhere else to put them. Now, I'll be able to put some of that stuff on these shelves.
So that brings an end to the closet-cleaning-out effort. There are just a couple of "hope chests" I want to go through. One is mine, the other is my mother's. I inherited it when she passed away. Both are filled with a lot of linens from my grandmother, old worn out quilts that she made, my wedding dress (made by my mother), and some baby things I'd saved for future grandchildren. A lot of that stuff can just go away now that our lives have traveled a certain path that did not provide opportunities for it. No regrets, except that now I need to find homes for some of that stuff. I'll tackle that today. I know of some little boys who can use the little boys clothing. The rest will either get returned to the hope chests or donated to Goodwill. It's probably a couple of hours of work, but I'll be glad to get it done.
Smitty was anxious to get on with our job of quilting Grandma's Thimbles. That Smitty. He's a taskmaster. 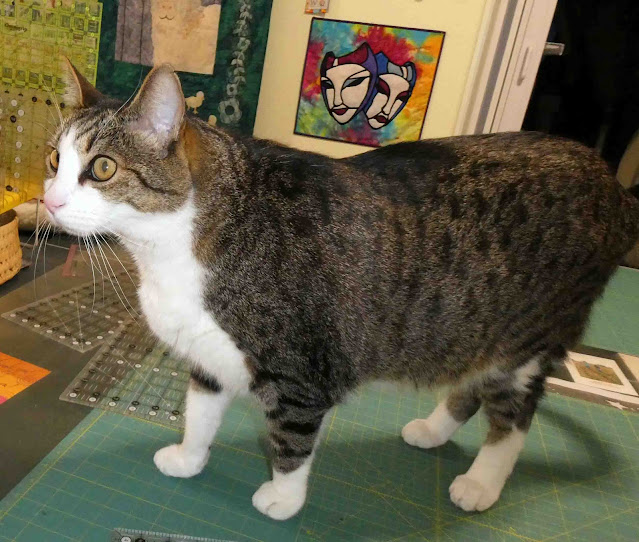 I finished quilting the third row of thimbles and then turned my attention to the sashings. There, I did a motif Lori Kennedy refers to as "ribbon candy." It isn't a motif original to her, but I like her name for it. 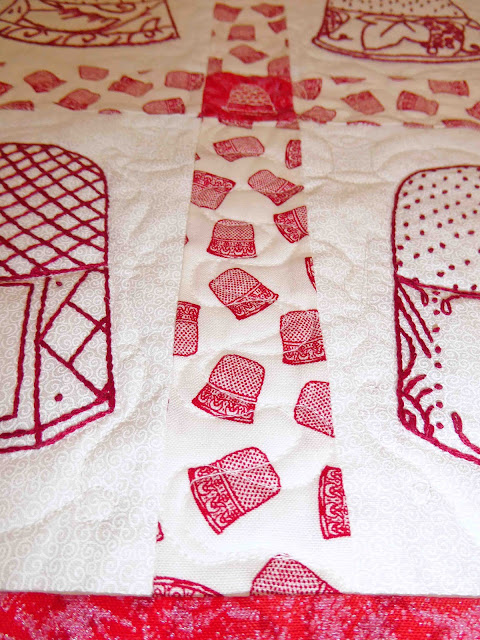 It's a pretty easy insy-outsy-upsy-downsy pattern. Then I set up the machine for straight stitching again and just stitched a single line of stitching in the outer border. 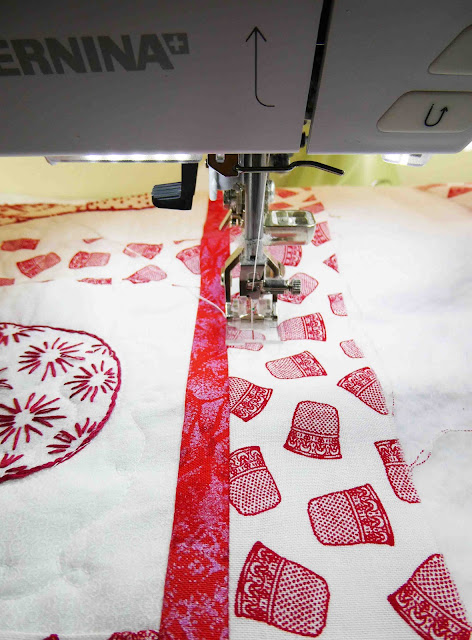 It's hard to see the quilting from the back, but here's a picture anyway. 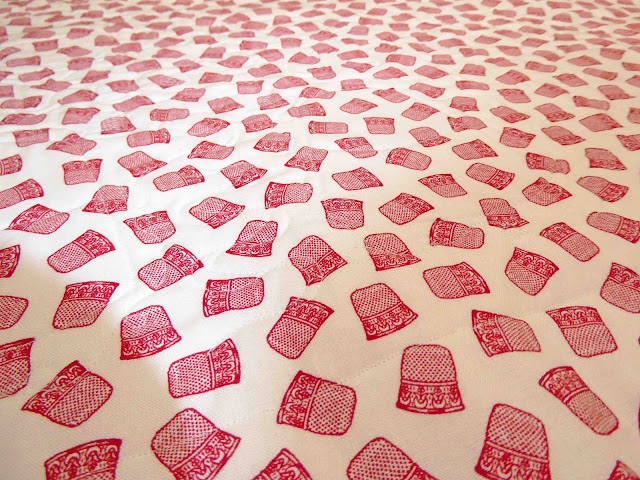 And then it was time to sew on the binding. 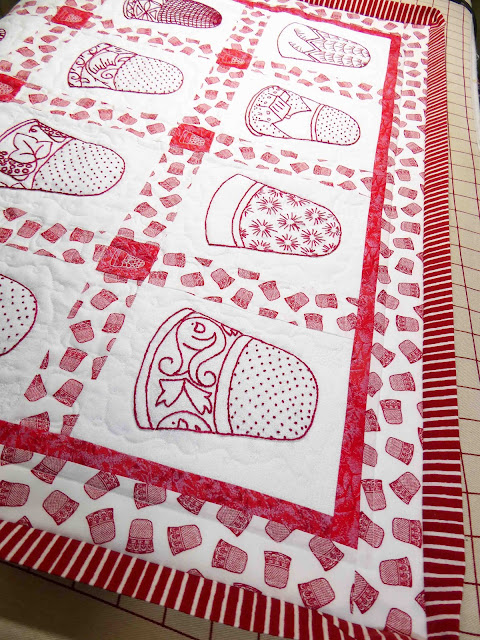 I spent the rest of the afternoon hand-stitching, and I made my way all the way around to a finished quilt. 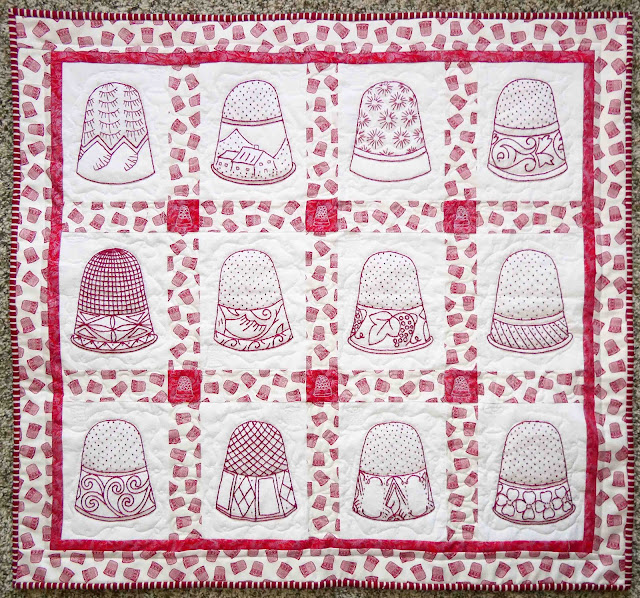 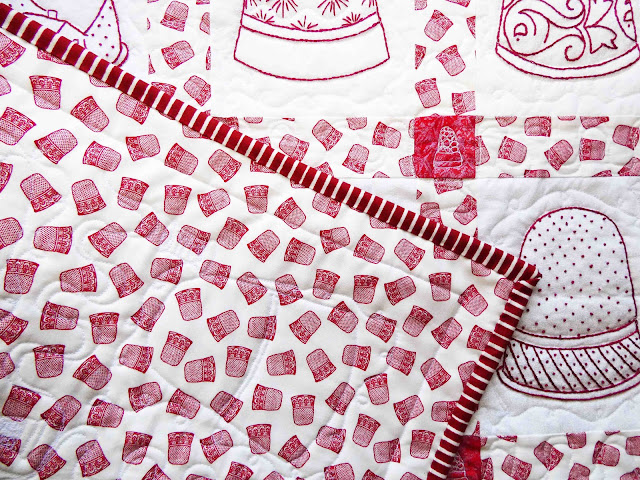 Today I'll link up to:

And that was a long day. Cats were tired. Smitty was caught lounging in kitty no-cats-land...on the dining room table. You can't fault him for wanting a comfortable place to lie on a hot day. 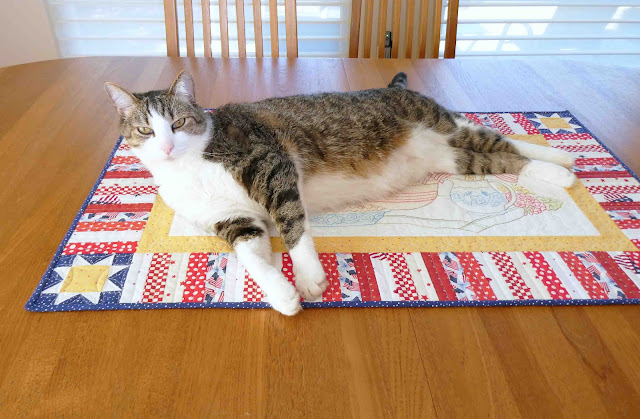 Today I'll get to work on my slow stitching, and then I'll work on cleaning out those hope chests...or "hopeless" chests as a friend's father used to say. If there's time for sewing (and there should be), I'll get to work on my list of WIPS, starting with another block for the Vintage Linen quilt. This is where I left it last time. 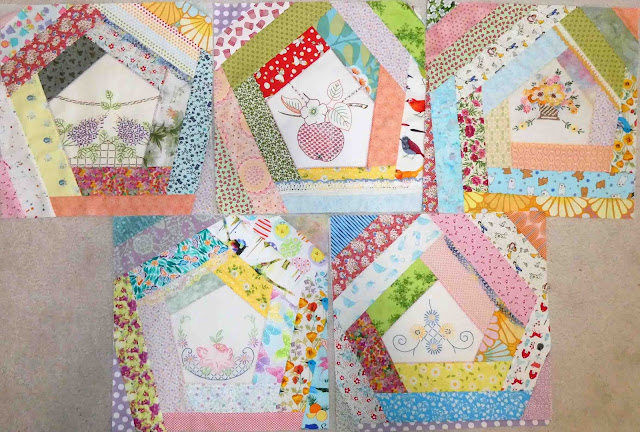 Who knows...maybe I'll find some more pieces I can use when I go through those chests.
Posted by Barbara at 7:35 AM

Hope is like the sun, which, as we journey toward it, casts the shadow of our burden behind us. ~ Samuel Smiles

Oh what a mess. Glad you are able to be on top of it. The thimbles are super cute (the fabric and the blocks), but Smitty takes the cake. Happy cleaning and sorting. I'm sure Smitty the taskmaster will help.

I give you credit for cleaning out closets! Yikes.your thimbles are just beautiful ❤️

The thimbles quilting is really neat:)))
I love how you've set those embroidered linens...so pretty and vintage looking...nice work
Hope your space gets pulled together for you soon...
Hot here today with 73 dewpoint...Hoping for a rainy day tomorrow--everything is so dusty!! Even the leaves look faded!! Too early in the season for that to happen!! Usually that's an August thing!!
hugs, Julierose

Hi,
I love your thimble quilt...so pretty! Oh, what
I would give to have closet so big...Smitty looks
totally relaxed on the table. Have a great day!

Great work on downsizing! Love your vintage linens quilt. I am going to have to do something like that one day.

I need to do some closet cleaning too, but find it really difficult to get inspired to do it. LOL Smitty looks right at home in that spot on the table.

I think you let Smitty get away with a LOT!! LOL LOVE how the thimbles came out right down to the binding. Perfect!

Your local squirrels must think your place is one of the best eateries in town - haha! Must feel good to have that closet cleared and ready for your quilting goods. Smitty really does enhance that table, you know? The thimbles quilt is very cute!

Okay, you've inspired me (I think). I have plenty of closets that need a good going through as well as a craft room that needs straightening. I am amazed at the amount of space you managed to clear out in that closet. You must share it again when it is filled with more of your sewing room items. I am so happy to see the thimble quilt finally finished. It is gorgeous!

Theres always such a lot to see on your blog posts, cats, gardens, stitcheries. The thimbles quilt is gorgeous, and almost done, probably is by now. And I love the little blocks you are making with those embroidered doilies.

Ah - the closets - the place where good things go to why (as in WHY did I keep that). I had to shovel out one side of our master bedroom closet in order to shoehorn our wheelchair in there. It's been out on loan for several years to a friend of ours and now that they've moved into assisted living they have no more need of it so it came back. It will stay there until someone else needs it and off it will go on another adventure. Originally we had it for my Mom and we can't quite bring ourselves to get rid of it (or my dad's walker).