Yesterday morning brought high hopes I'd have another quilt ready for binding, but it didn't work out that way. We ended up running all over town again. I had a letter to mail...my contribution to the embroidery quilt collaboration. Also, it was the last weekend of the month, which meant a product I use daily was half price. I always take advantage of that sale. And as long as we were out, I suggested to Mike that we pick out carpet for the downstairs. And, of course, a trip like that generally de-evolves into running every possible errand that we can think of...in this case, related to car maintenance. Oh well.

Earlier in the morning, I received a message from a dear friend. I gave them the Garden Sunshine quilt. Ever since having to evacuate our home for a wildfire two years ago, I've been giving away quilts almost as fast as I can make them. Up until that point, I had dozens quilts, sitting around, folded up, never looked at nor used. After that experience, I gave at least half of them away, and I've continued with that practice of finishing and giving away. For me, the fun of quilting is in the making and the giving. And this is just what I'm talking about. This is my dear friend Rick. My friend (his wife), Danni, is taking the picture, and Rick is enjoying his new quilt. 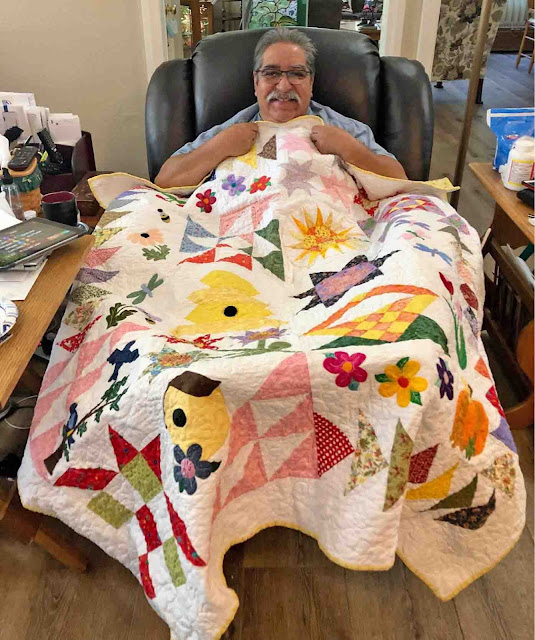 Seeing Rick snuggled up under his quilt brings me much more joy than having it folded up and hanging on a rack in the downstairs family room. And Rick looks pretty happy too.
When we left the house, Sadie was enjoying a shady area on her catio. As I mentioned yesterday, Smitty loves to bake in the sun. This little black-furred girl can't tolerate it for very long. 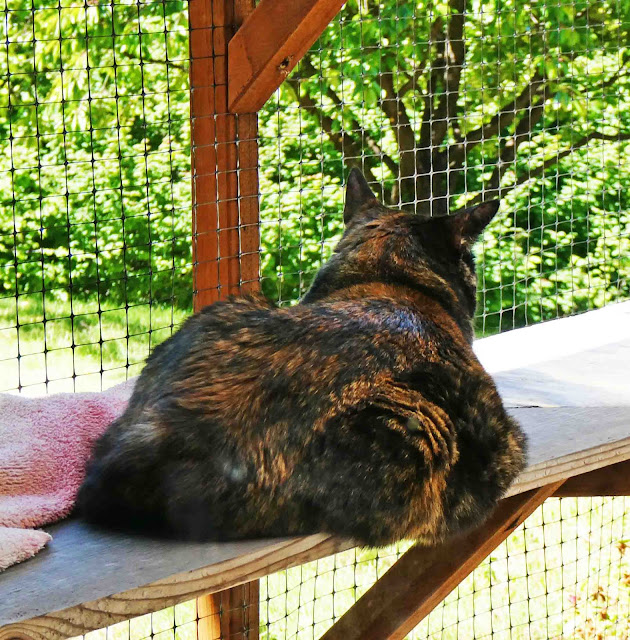 Okay, so we picked carpet for the downstairs. Since it's a daylight basement, there isn't a lot of light. We have a nearly-white carpet down there now, and of course, it shows every little thing that falls on it. I wanted something light, but with enough color to hide any spills. It's not unlike what we have on the main level, but lighter in color. 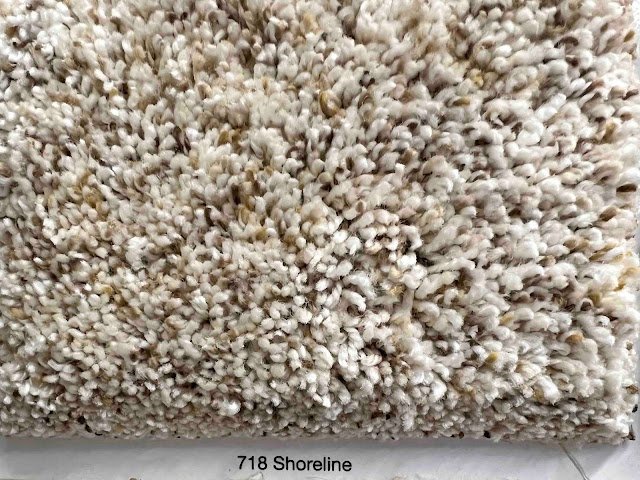 If you haven't picked carpeting recently, then you might not know that it takes about five seconds of looking before it all starts to look the same.
Back home again, I noticed another of the Garden Treasures peonies had bloomed. 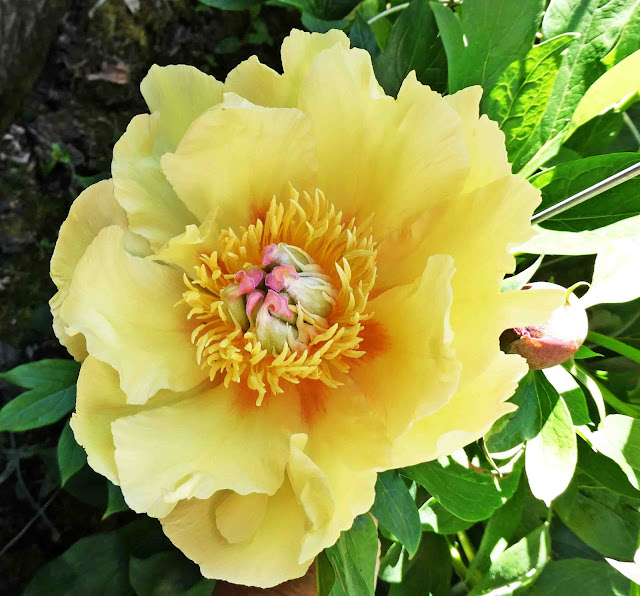 There's another that is close, and still lots more buds. I expect this one will be covered in flowers within the next few days. 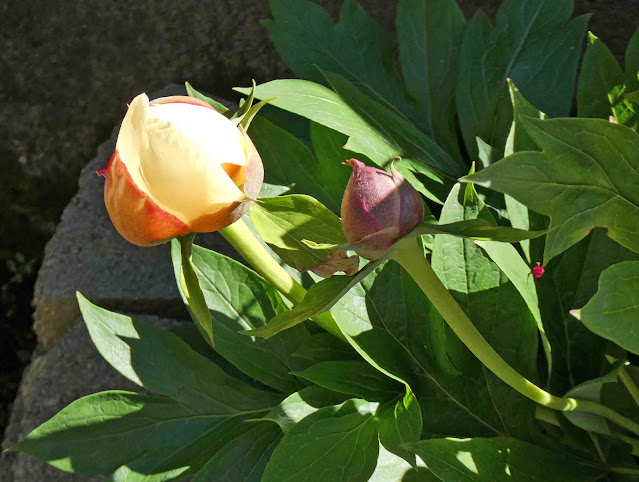 Also, the roses are surviving the assault from the deer. (Actually, I think the deer just haven't noticed them yet.) There are lots of buds, and quite a few flowers are beginning to open. 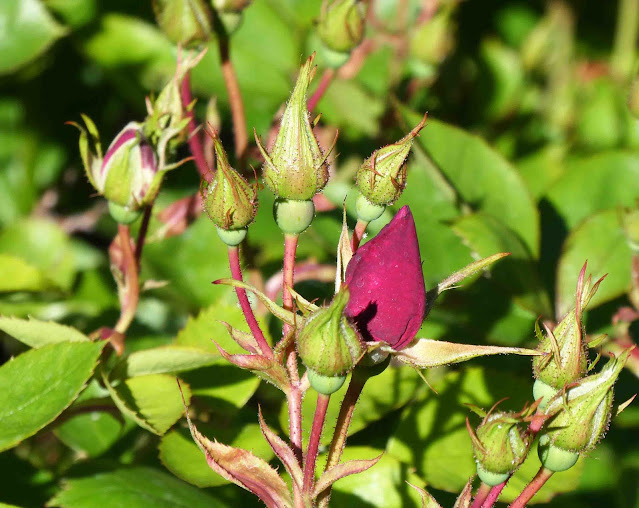 Nearby, these guys were enjoying a sunbath. They're pretty cute and funny when they do this kind of stuff. 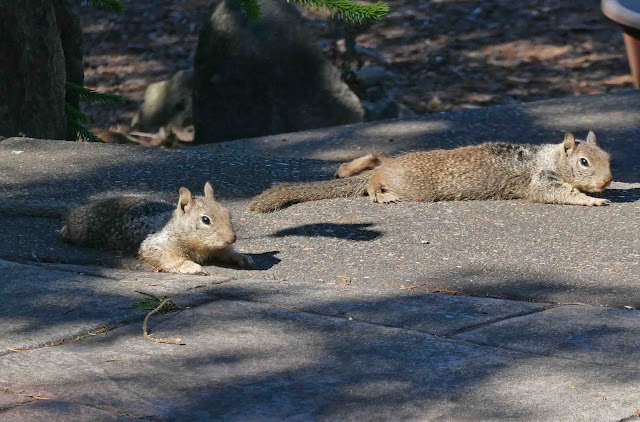 So, the hours went by quickly. There was no more quilting accomplished. As I've mentioned, we're planning dinner outside most days this week, and I have salads and sandwiches on our menu for the next several days. Last night it was Shrimp and Crab Salad Rolls. They have the most wonderful brioche sandwich rolls at our grocery store, split on the top, and they are perfect for this sandwich. The original recipe was from Cooking Light, and this was my third attempt at it. The original recipe seemed a little bland to us, and so I made some changes the second time around. I wrote myself some more notes after that attempt, and Mike announced it was just right with this attempt. I'll share the recipe below. I changed the amount of horseradish, added a little bit of salt and some Old Bay seasoning. 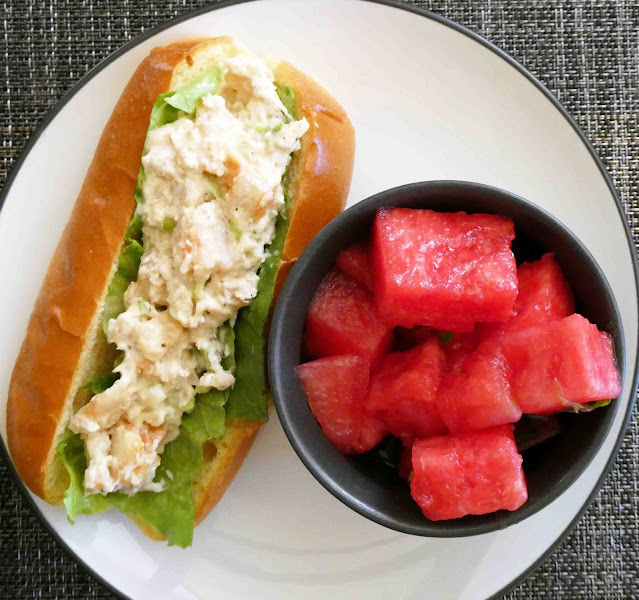 On the side was a Watermelon Salad with Rum and Mint. It's one of my favorite ways to use fresh mint, and it's a really delicious summer salad. A personal-size watermelon is all you need. I've linked to the recipe from Martha Stewart. Of course, if you're feeling into The Martha, you might use a melon baller to scoop out the watermelon. I just chopped mine into cubes.
Here's my adaptation of the recipe for the Shrimp and Crab Salad Rolls.
Shrimp and Crab Salad Rolls
Serves 4
adapted from Cooking Light
Ingredients:
3 tablespoons chopped green onions
3 tablespoons light mayonnaise
1-1/2 tablespoons prepared horseradish
2 teaspoons Dijon mustard
1 teaspoon jalapeno hot sauce (such as Tabasco brand)
1 teaspoon Old Bay
8 ounces chopped cooked shrimp (about 1 1/2 cups chopped)
8 ounces lump crabmeat, drained and shell pieces removed
kosher salt, to taste
4 small whole wheat Sandwich rolls, split and toasted
4 small Boston Lettuce leaves
Directions:
Combine first 6 ingredients in a large bowl, and stir well.  Add chopped cooked shrimp and lump crabmeat, stirring to combine.  Add salt to taste. Line each hoagie roll with 1 lettuce leaf.  Place 2/3 cup shrimp mixture on each bun.
* * * * *
Okay, and that brought me to the end of my day. Today should be less busy, although someone is coming to take up the carpet in the guest room and small hallway outside the guest room. Today, they're only taking up the carpet that got wet with our plumbing problem. Since the leak was gray sewer water (not black water, thank goodness), it is considered "contaminated," and removal is reimbursed at three times the regular rate. The rest of the carpet will be removed at the standard rate, but that will be for someone else to do.
This has all been so confusing. We've had different people in...insurance adjusters, plumbers, water amelioration specialists, mold amelioration specialists, and more. Each one seems to come and stay ten minutes, and then no one comes for another two weeks. The same thing happened on Wednesday. We thought they would start working on rebuilding the wall, but no. A guy came in and took "renewed measurements." And he was here for about ten minutes, and then gone. And so I'm asking myself...like, did the shape and size of the room change since the last time someone was out to measure it? At least three people have taken measurements. It seems that information could have been shared, but what do I know?
Well, here's what I know: Aside from fixing the plumbing, almost nothing has been done to the downstairs since we reported the leak to the insurance company on April 10th. It's all very frustrating. And with several trips planned this summer, the window for having people here working is closing quickly. We're promised the job will be finished before we leave on our longest trip in mid-August. As for the rest, we're promised reconstruction of the wall will be done no later than the second week of July. It had better be, or I'll have to start using my social worker voice, and no one wants that.
Okay, so enough of that rant. Time for me to get going on my slow stitching. I'm getting all hot under the collar again about the downstairs, and that's not polite conversation for anyone's ears. Or eyes. Signing off for now before my murder instincts kick in.
Posted by Barbara at 8:00 AM

It's easier to put on slippers than to carpet the whole world. ~ Al Franken

Is Garden Treasures a tree peony or a herbaceous peony? It's an unusual color for the latter, so I'm guessing it might be a tree peony.
Also I laughed out loud at the reference to your social worker voice. Today I'm wearing
a t-shirt that says "Don't make me use my librarian voice".
A wise idea to give away your extra quilts. Your sons undoubtedly won't want them all, so this way you get to choose the recipients.
Pat

My gosh no darn wonder you're frustrated!! We are supposed to get our sink/faucet shipped to us this coming Friday and then we have to try to find a plumber!! So we are really prepping anything to cook from our bathroom faucets...loads of fun!!
I hope you get everything taken care of before your planned getaways...

I sewed leftover mini charms into twosies and now I will make them into
4-sies for the (my proposed SMALL size) "Jack and Jill" pattern...

Hot and humid here--dewpoint is 72--not very comfortable out there...thank heavens for AC
Hugs, Julierose

When something similar happened to my house last year I swear it took longer to repair the waterline leak in the kitchen wall and replace cabinets than the original remodel! Trust me, I feel your pain!

OK, so do tell what your half price product is (or maybe it's a secret). That carpet looks almost exactly what I have in the carpeted areas of the house and I bought it for the very same reason! Goofy squirrels. I LOVE the catio (think my girl would, too). I occasionally donate quilts and have made I don't know how many Quilts of Valor..love making and giving them!

Those yellow peonies are so pretty! Really fun to see your quilt being used by your friend. That is definitely why we quilt, to bring joy to others! I'm going to copy and paste that recipe (are you writing a book soon, so I can keep all your recipes in one place (grin)?

Your yellow peony is gorgeous!

The smile on Rick's face says it all doesn't it.
As for choosing carpet, I hate the stuff. For one thing I'm allergic to the 'new' smell of carpet (to the point of not being able to go into a carpet store without a reaction) and no matter how much we vacuum ours collects dust which also triggers allergies. Unfortunately we're stuck with it, unless we want to pay to have it removed and replaced - and then our rent will go up accordingly. We end up running two air purifiers all the time.
And that yellow peony is spectacular!