Road Trip on A Rainy Day

We took off late yesterday morning to pick up a wine shipment from a winery down near Salem. I had my camera along, and I might have taken pictures, except that it was pouring rain. It was a little scary, and we went back and forth a little about whether to bag the whole thing. I was thinking to myself that we might have pulled off if we'd been towing the RV. Just then, we noticed a line of three RV's pulled off to the side of the road. Fortunately, the downpour was short-lived, as they often are, and we felt it was safe to continue on.

A trip to pick up a wine shipment is always a convenient excuse to eat lunch out. We stopped off at one of our favorite brewpubs and ordered BLT's. I liked the carnation on our table. I'm not sure I've ever seen one in these colors: 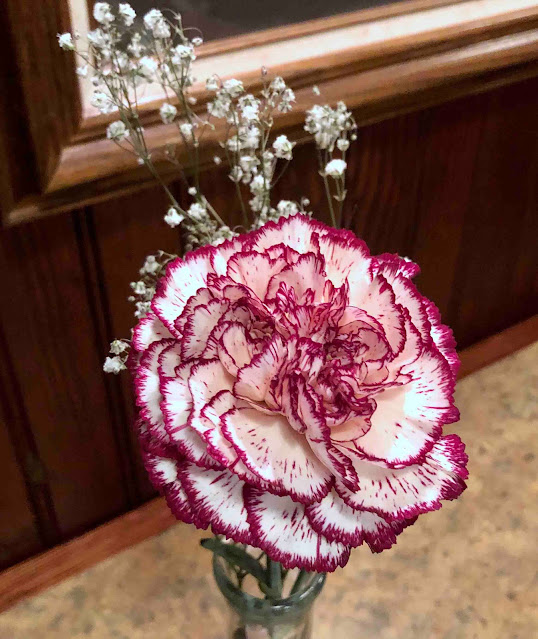 When we got home, we unpacked the wine, and then realized they'd included this handy cat trap at no extra charge. Such a deal! And we caught a cat right away. It works splendidly. 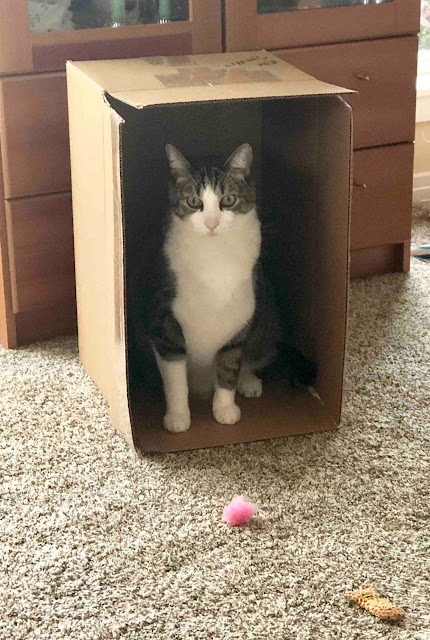 It was too late in the day to start any sewing. However, I've been thinking, thinking, thinking about my next project...a new one. I want to use up some more of my embarrassingly huge stash of flannel scraps. Besides, Mike likes the flannel quilts best. Originally, I had in mind to follow a pattern I'd found on line featuring different sizes of rectangles. I've changed my mind, though, and I'm going to make a rag quilt. It will give me a way to use up some small scraps of batting along with the flannel stash.
I made a similar quilt as one of my first quilts. I called this quilt "Great Outdoors." It isn't a very good picture. This was pre-blogging days...not that my pictures have improved, but there you go. I believe this pattern is called a Double Four-Patch. I want to make a scrappier version of it with my flannel stash. As I look at this, I'm realizing the four-patches are not "ragged," but they will be in this newer version. 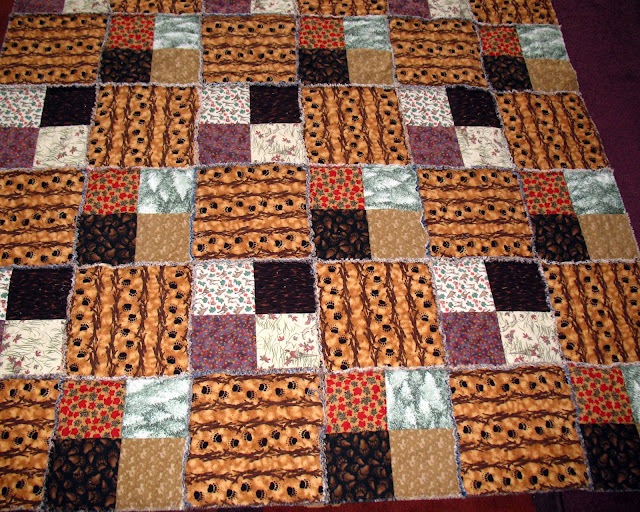 You might recall last month, I ordered some fabric for a different quilt. When it arrived, it turned out to be flannel, rather than quilter's cotton. Duh. It was clearly marked, but I'd just missed the part that identified it as flannel. Oh well. I figured I'd just put it with the rest of my flannel scraps and use it in my next flannel quilt...this one. Before I could do anything else, I needed to wash it. That was my one sewing-related accomplishment from yesterday. 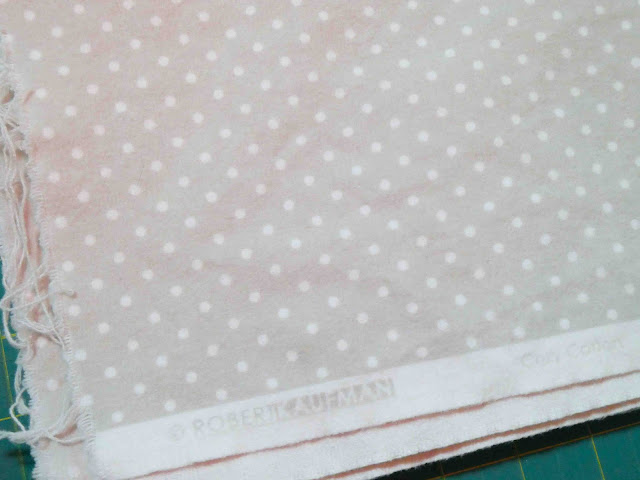 Going through my flannel stash, I selected the pieces that could be called "yardage." I have at least a couple of yards each of the ones you see in the image below. Missing from this picture is a significantly large piece of solid red. 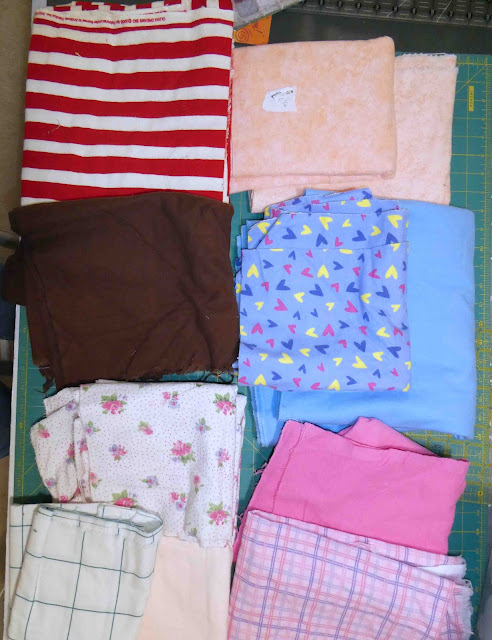 The ones in the image below are also fairly large pieces, but probably less than a yard of each, and irregularly cut. 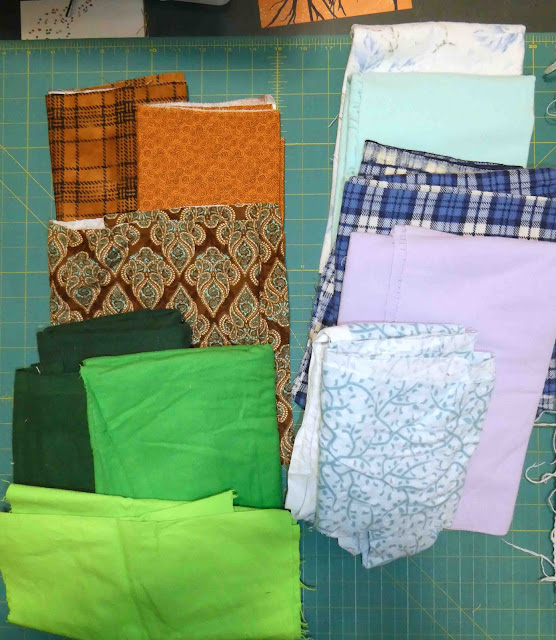 And then there's this ridiculously large tub of smaller scraps. 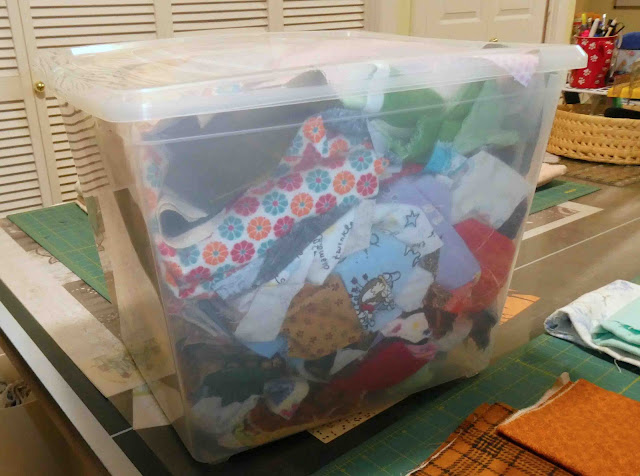 So I've been considering how to use the fabrics I have available. I have in mind to alternate the solid red and red stripes in the larger blocks, and then do a scrappier version of the four-patch blocks. And since this is a rag quilt, I'll want to cut the back blocks at the same time. For those, I'll alternate the gray and white polka dot with the sky blue yardage. My goal for my next sewing will be to make the first two rows of the quilt. I'm following along with the sizes for this one seen on The Spruce Crafts, but I'll be adding two rows of blocks both vertically and horizontally.
I don't know if there will be much time for sewing today. We have a packed agenda. A guy is coming this morning to look at some trees toward the bottom of our property. They've grown tall enough that they're blocking our view of the mountains. More importantly, they're blocking our wireless internet signal from across the valley. This sounds crazy, even to me, but we have an antenna at the peak of our roof that picks up a signal from across the valley, miles away, to give us our internet connection. With trees in the way, we're starting to have problems since the two devices cannot see one another as well as they used to. We're asking "the guy" to top the trees and unblock the view. So there's that.
The next two days of weather are forecast dry, and so it's a good chance to get out and start weeding the herb garden. We're also needing to make a trip to the grocery store, and I need to catch up on some housework. So, you can see it's a busy day ahead of us. Sewing might have to wait another day. On the bright side, it'll give me some more time to circle my flannel scraps and make up my mind about how best to use them.
Posted by Barbara at 7:01 AM

I am so busy doing nothing... that the idea of doing anything - which as you know, always leads to something - cuts into the nothing and then forces me to have to drop everything. ~ Jerry Seinfeld

It's none of my business, but I have to protest against topping trees. They are so ugly. Maybe you could cut down one or two instead.

Re rag quilts: When you wash the rag quilt for the first time after "fraying" the edges, either with using an Accuquilt die or clipping, protect your washer by washing it in a large pillowcase, mesh bag, or something. I made rag quilts for Christmas one year and did in the filter on the washing machine. It was entirely filled with bits of fabric/thread. After replacing the filter, DHs solution was to take the rest of the quilts to the laundromat and wash them there the first time. Poor, unsuspecting laudromat. Since then, on the few rag items I've made I have used a stiff bristle brush and "frayed" the edges with it to save my appliances. Easier to clean up of the mess than have a repairman now that there is no longer a resident engineer.

You have quite a collection of flannels--so you have nice choice for a scrappy looking quilt...
We awakened to fog again this morning and now we are awaiting predicted thunderstorms...I like a good crash/banger myself...[just so long as none of our big old trees around us come down!!]

Made one more block-- so now I have 12; thinking maybe 3 more for a good length for a lap quilt...then add side borders...
Enjoy weeding the herbs--I used to actually love doing that in my younger years as it smelled so good!!
hugs, julierose

You can make many flannel quilts with that nice stash!

It seems to me that red flannels are real ‘bleeders’ ... you’ll want to use some Colour Catchers, especially with that new light colour flannel you ordered by mistake. Looking forward to seeing your creation.

You reminded me that I have two flannel baby quilts that I started last year, and you've guessed it, they have stalled. As for raggy quilts, I'm quite a fan of those too. I was given a bunch of gingham so I've cut squares out, and two lots of flannel, I dont use batting in raggy quilts myself. Happy stitching.

Ooo, that carnation is beautiful! And love that you got a cat trap with your wine! Too funny. I have made SO MANY rag quilts over the years. I made one for me, my DH and my other family members. DH is gone almost 10 yrs. so that's never used. Whenever I make a donation baby quilt, it's always a rag quilt. I don't do the quilting so rag quilts are great for me donation-wise since it actually gets done and donated--LOL!

Wine, pretty flowers and a drive. What a fun day, except for the rain. Oh, and lunch! Then to come home and catch that handsome Caternay Suave-ig-non. A good day, I'd say! Looking forward to seeing your flannel quilt take shape!

I agree with PiecefulWendy.


I'm using my yard and smaller flannels to make blankets for premies. The Smocking Arts Guild of America collects wee care items every year to donate to a hospital in the city where we hold the convention.